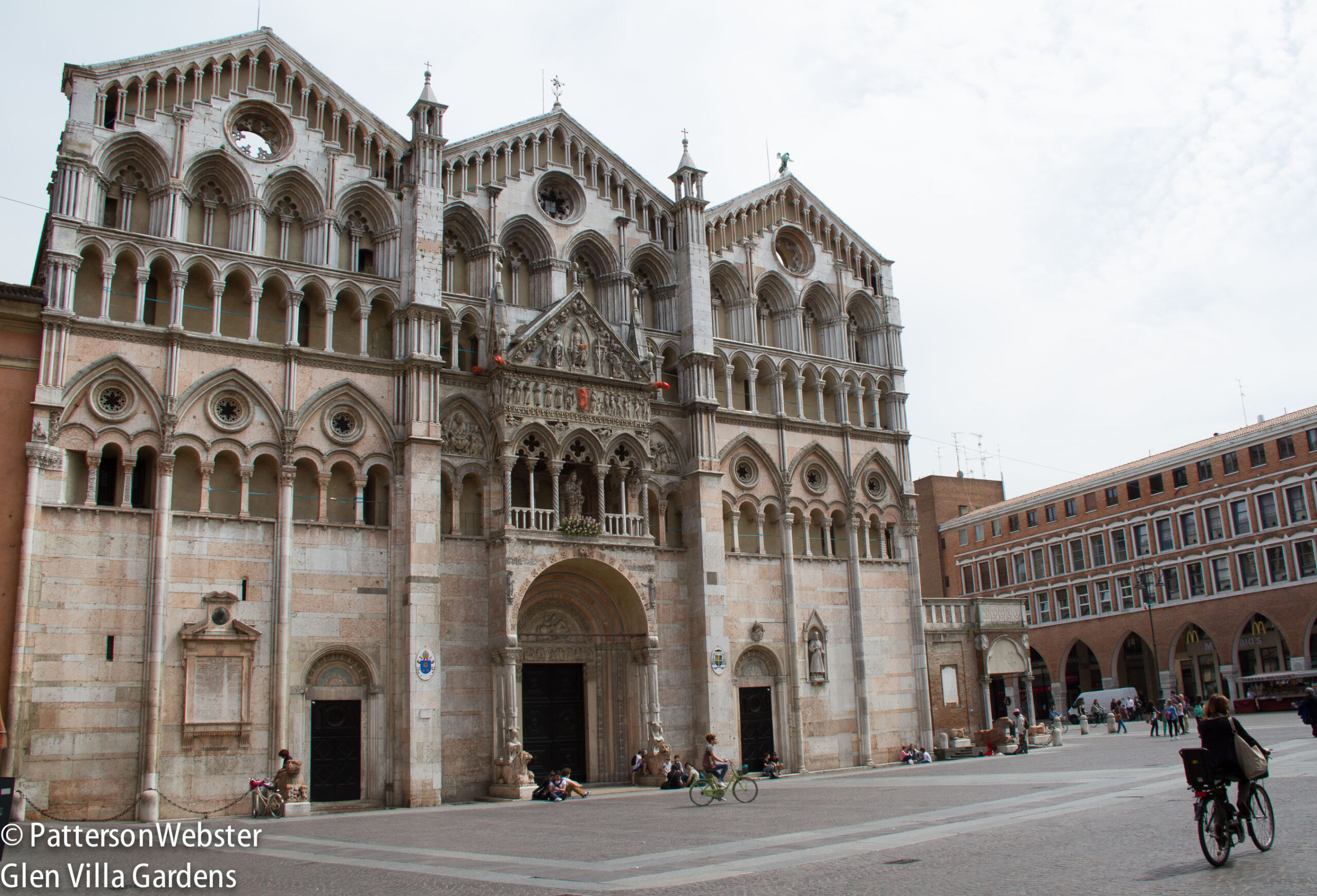 The cathedral in Ferrara, Italy was begun in 1135. Dedicated to the Virgin Mary and to the city’s patron saint, St George, it combines Romanesque and Gothic styles in a way I find extremely appealing.

The façade is richly decorated — and with a purpose. In the days when most people were illiterate, stories were told and lessons learned through carvings like the exceptionally well-preserved ones that cover the central portion of the cathedral’s façade. 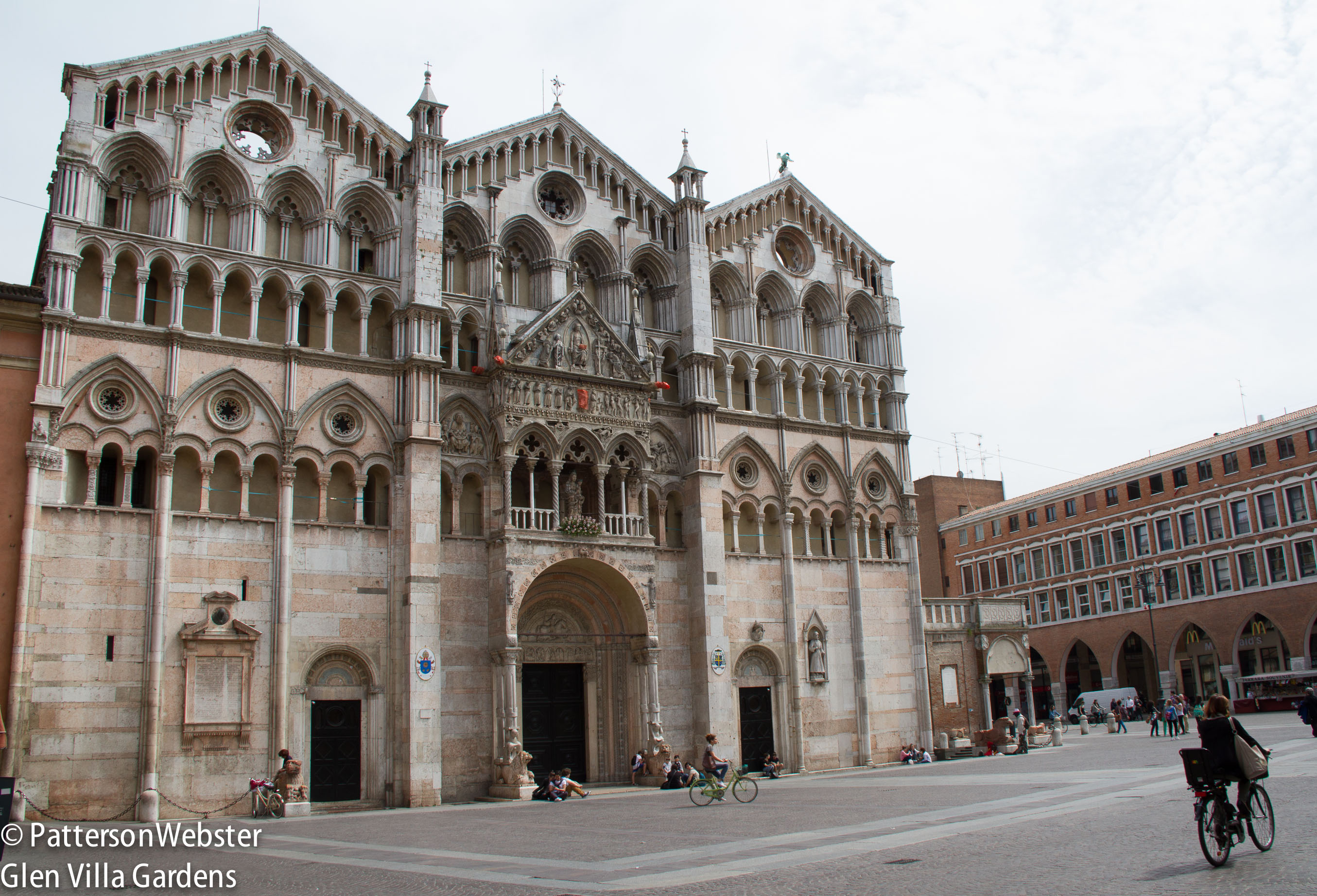 The lower portion of the façade alternates bands of white and rose marble. The topmost portion is white  marble only. The Romanesque portions are on the lower levels, with rounded arches; the pointed arches are Gothic

The section over the main entrance is where the stories are told. There are three of them, each shown in great detail and carved with extraordinary skill.

Immediately above the door is the portrait of the city’s patron, St George, doing his standard trick with the dragon. 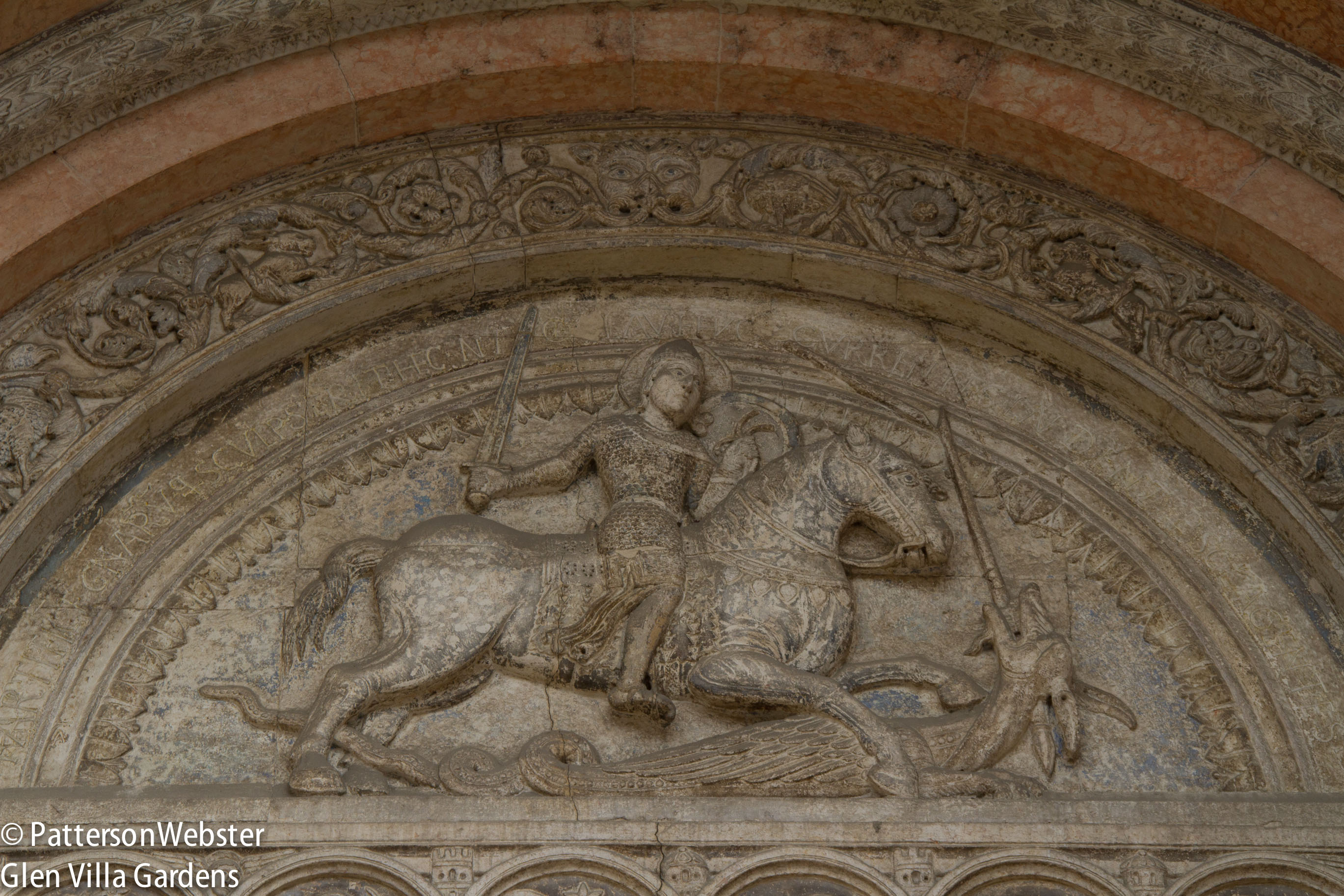 There are several versions of the story of St. George and the Dragon. One takes place in Silene, a town that may have been in Libya and that definitely was in a location sufficiently exotic for dragons to inhabit.. St. George promised to kill the beast if the locals converted to Christianity. They did, and the dragon was slain. A distressed damsel was also involved.

A story more relevant to the people of Ferrara appears higher on the façade, where scenes of the Resurrection and the Last Judgement warn them of what is to come, depending on how they act now. 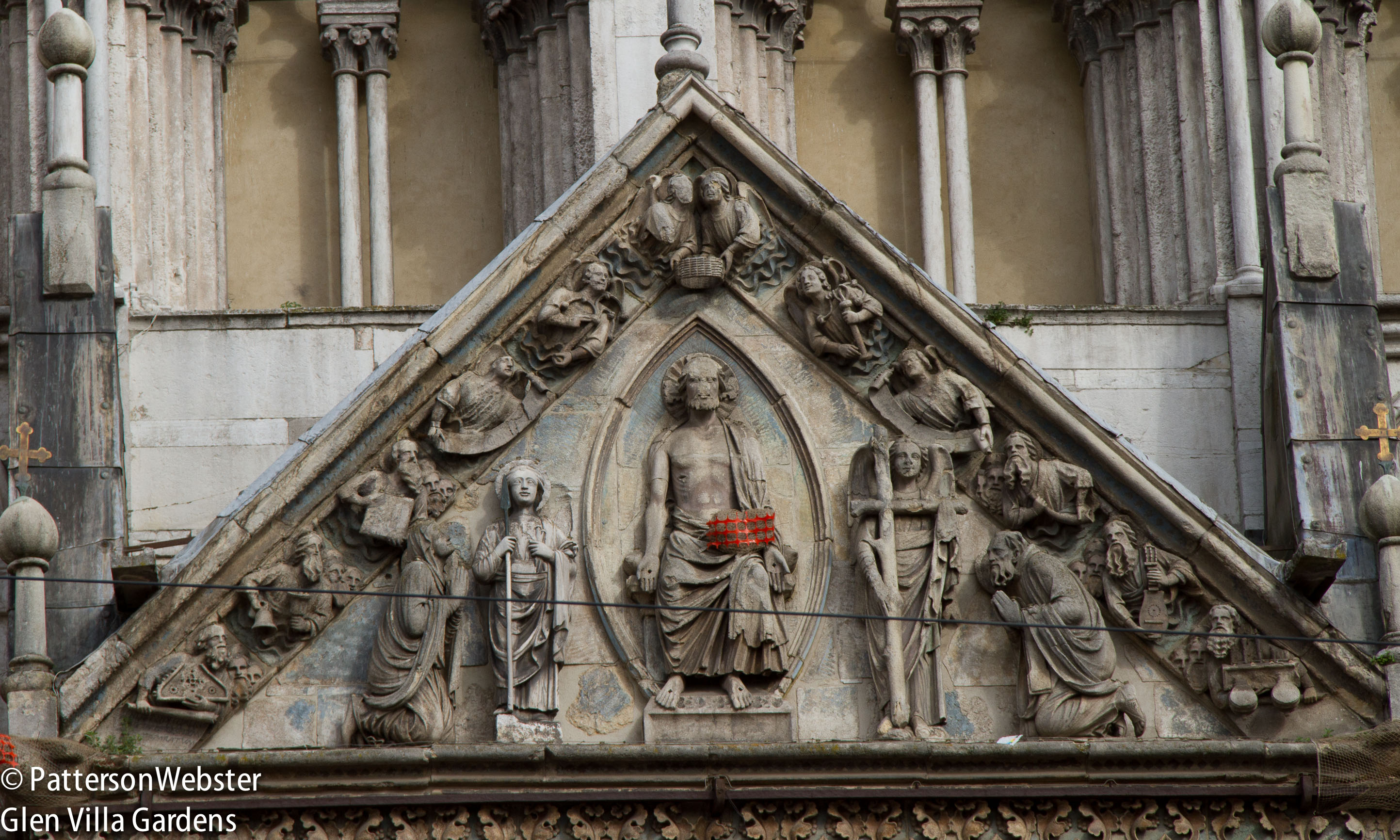 Christ is surrounded by angels. Kneeling on the far left is Mary, on the far right is St John the Evangelist. The orange mesh is protecting a vulnerable piece of stone.

Below this section come the warning signs. A narrow band shows people who are heaven-bound and those headed in the opposite direction. Beneath this frieze, the dead emerge from the coffins, waiting to be assigned to one line or the other. 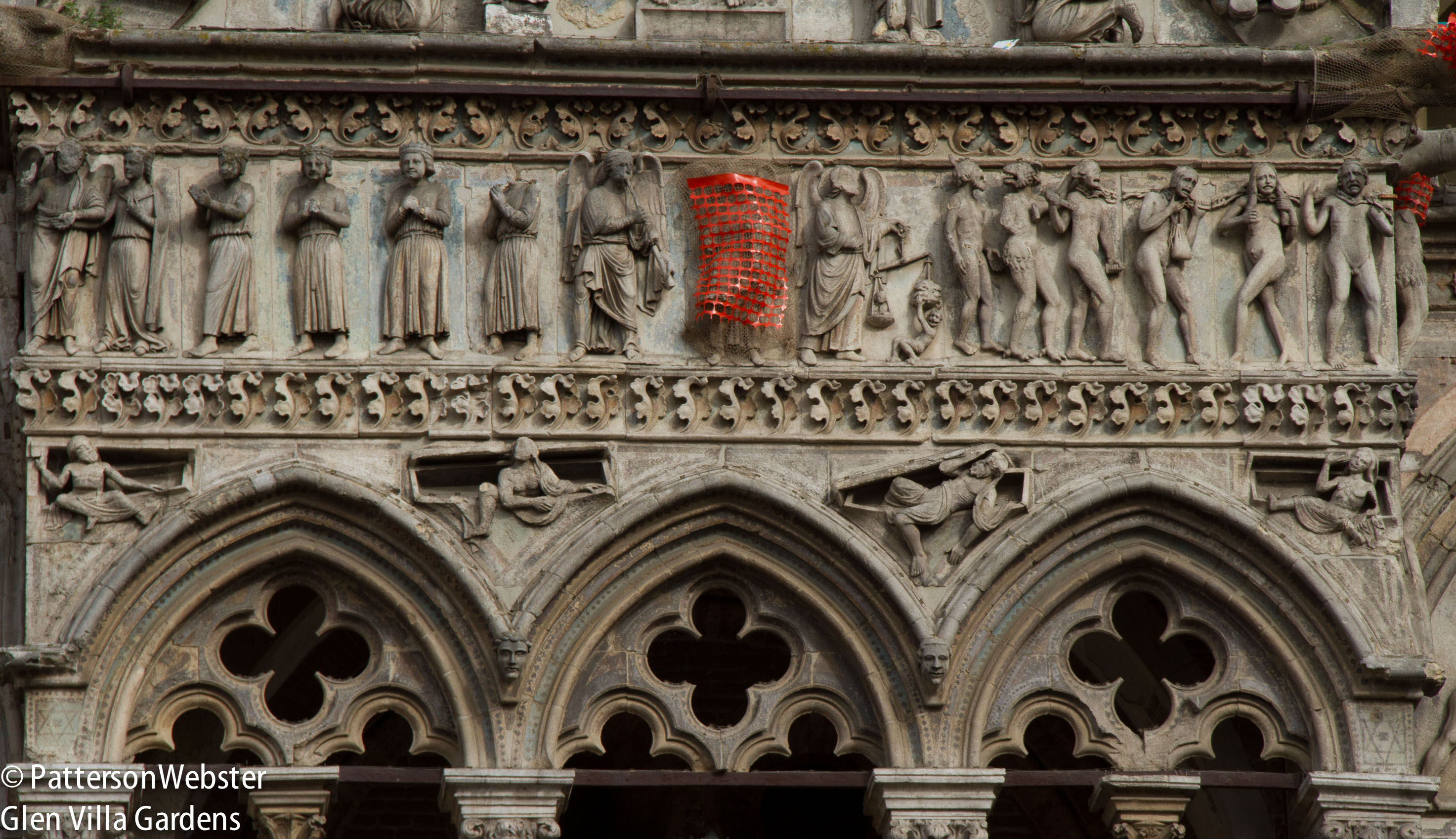 The good are on the left of the orange mesh, the bad on the right. Hidden behind the mesh is an angel weighing sins and good deeds on a scale.

Close-ups show that the doers of good deeds look appropriately well behaved — and that the sinners do not. 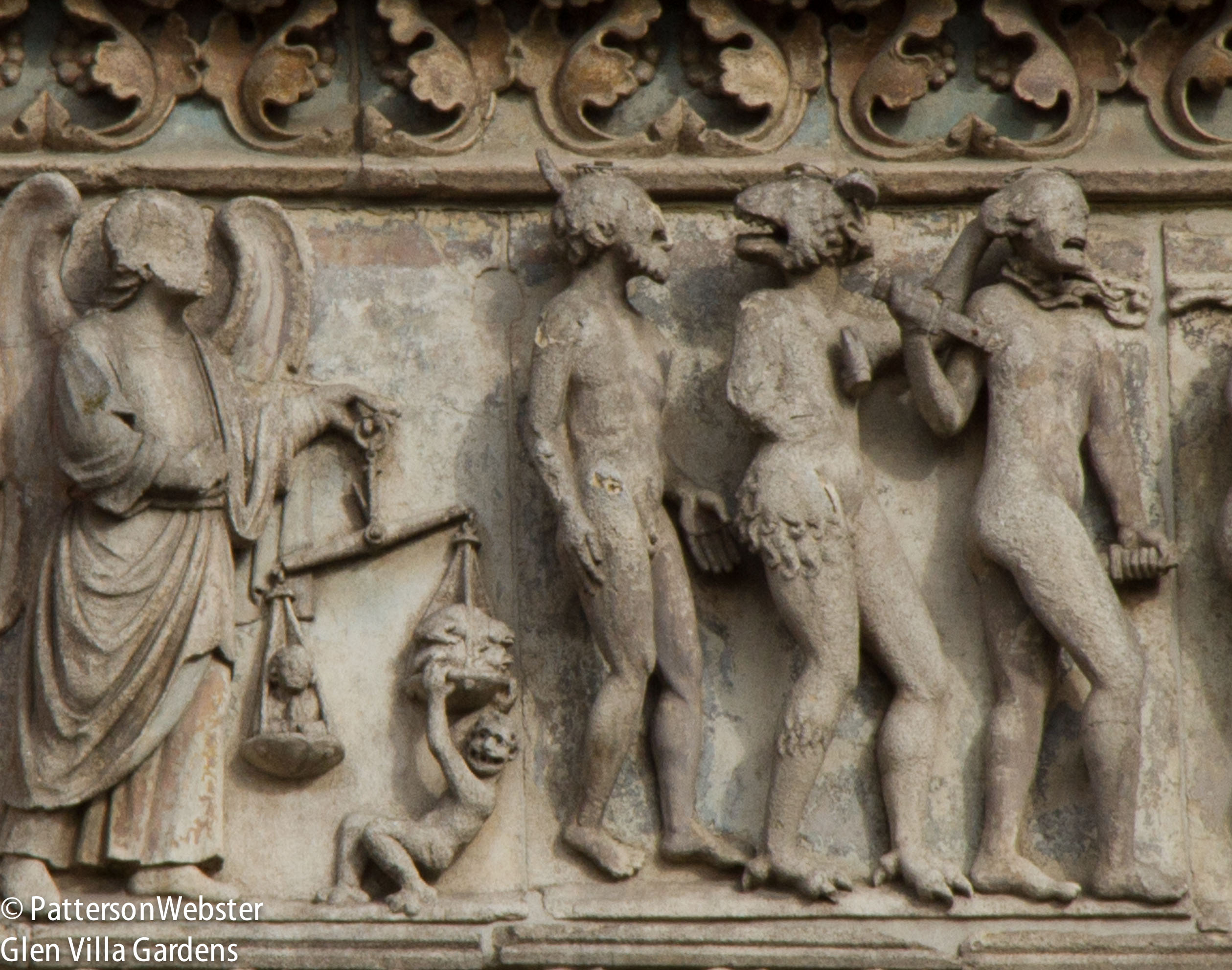 Notice the small devil holding down one side of the scale, damning the souls being weighed.

A scene set in heaven shows Abraham sitting comfortably with the souls of the blessed in his lap. 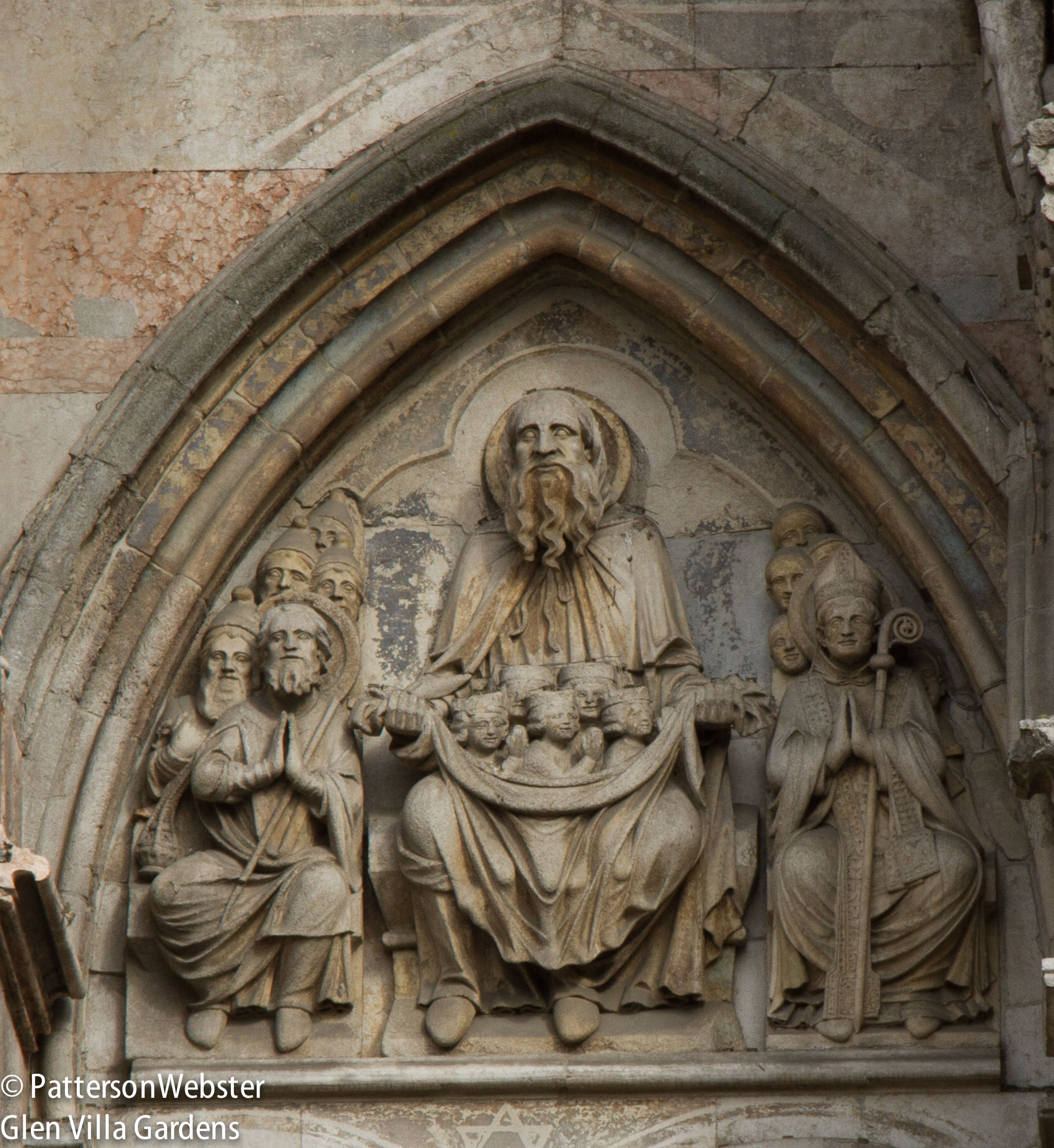 A bishop with crook sits on the right of this scene. Abraham’s beard is particularly well-carved, as are the folds in all the robes.

In hell, devils are torturing the sinners. The punishment is bad enough but the glee shown on the devils’s faces must surely have been sufficient warning: behave yourself or else. 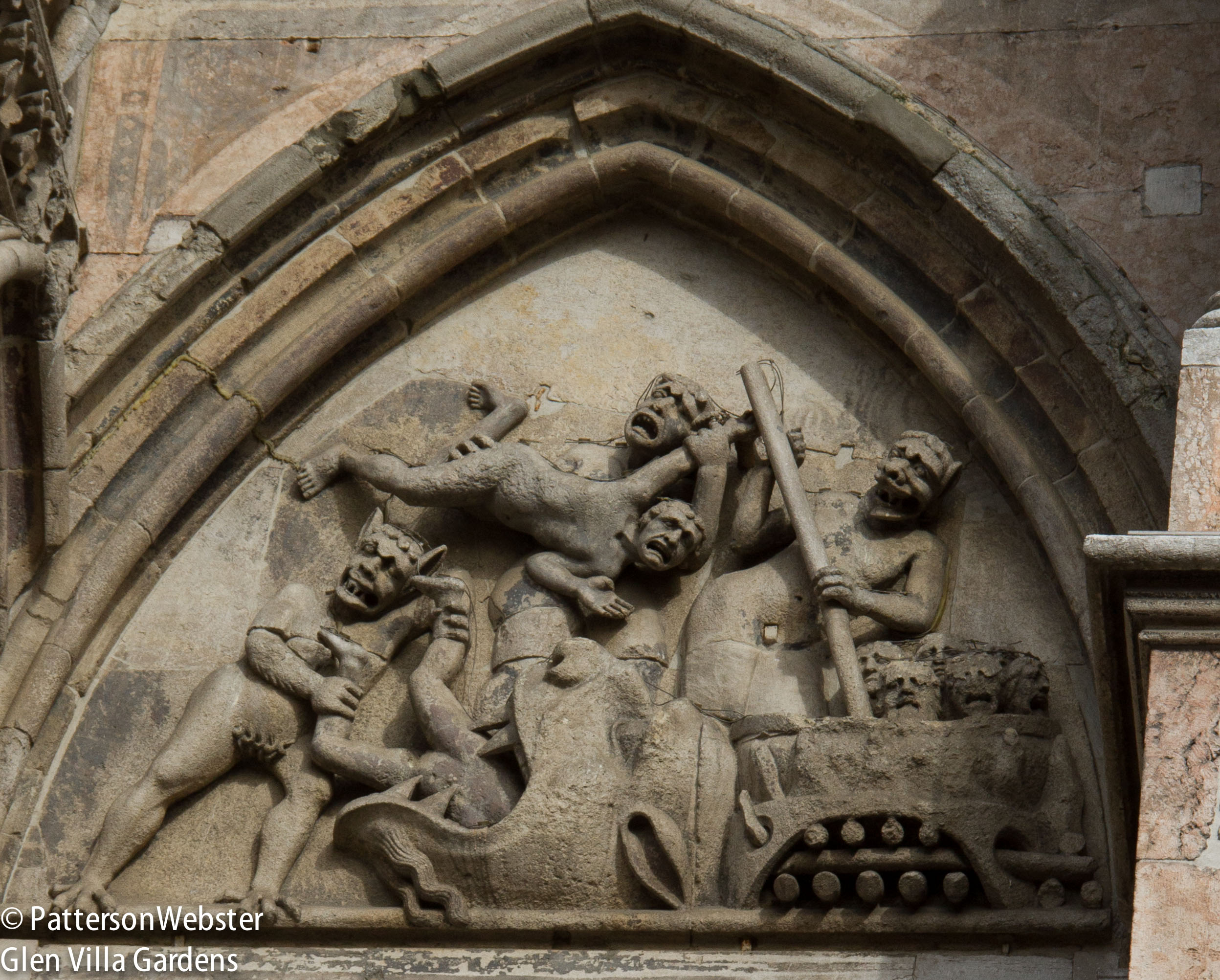 On the left, a devil pushes a sinner into the mouth of hell. Notice the logs under the vat of boiling oil.

A less gruesome story is told in the frieze above the main entrance to the cathedral, where eight scenes tell the life of Jesus from birth to baptism. 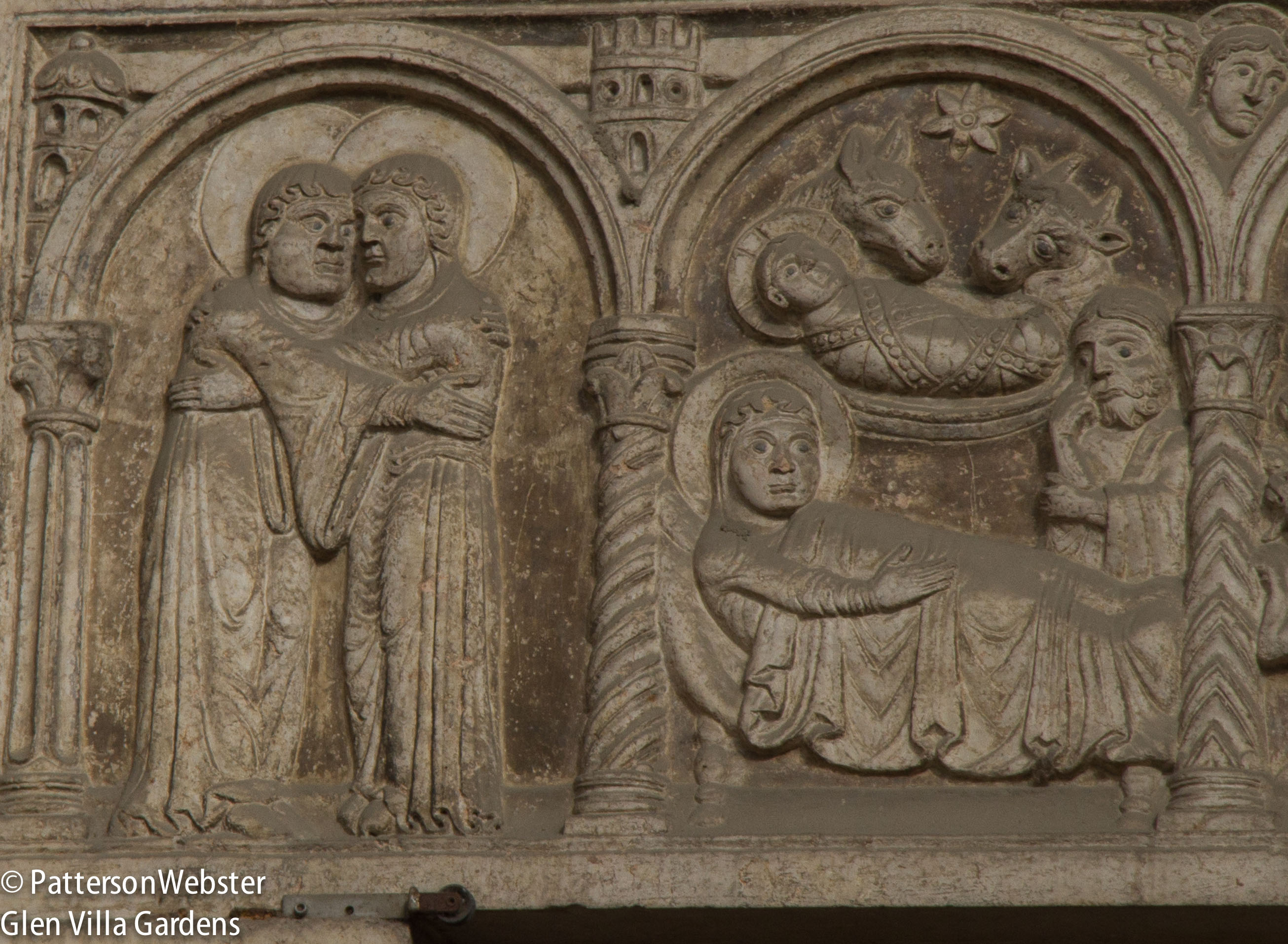 The cattle peering down on baby Jesus in the nativity on the right are particularly appealing. I can hear them lowing.  I’ m not sure what scene is shown on the left. Possibly it is the marriage of Mary and Joseph. Both figures sport haloes.

More scenes of the nativity show shepherds with cavorting sheep and one of the three kings arriving with his gift. 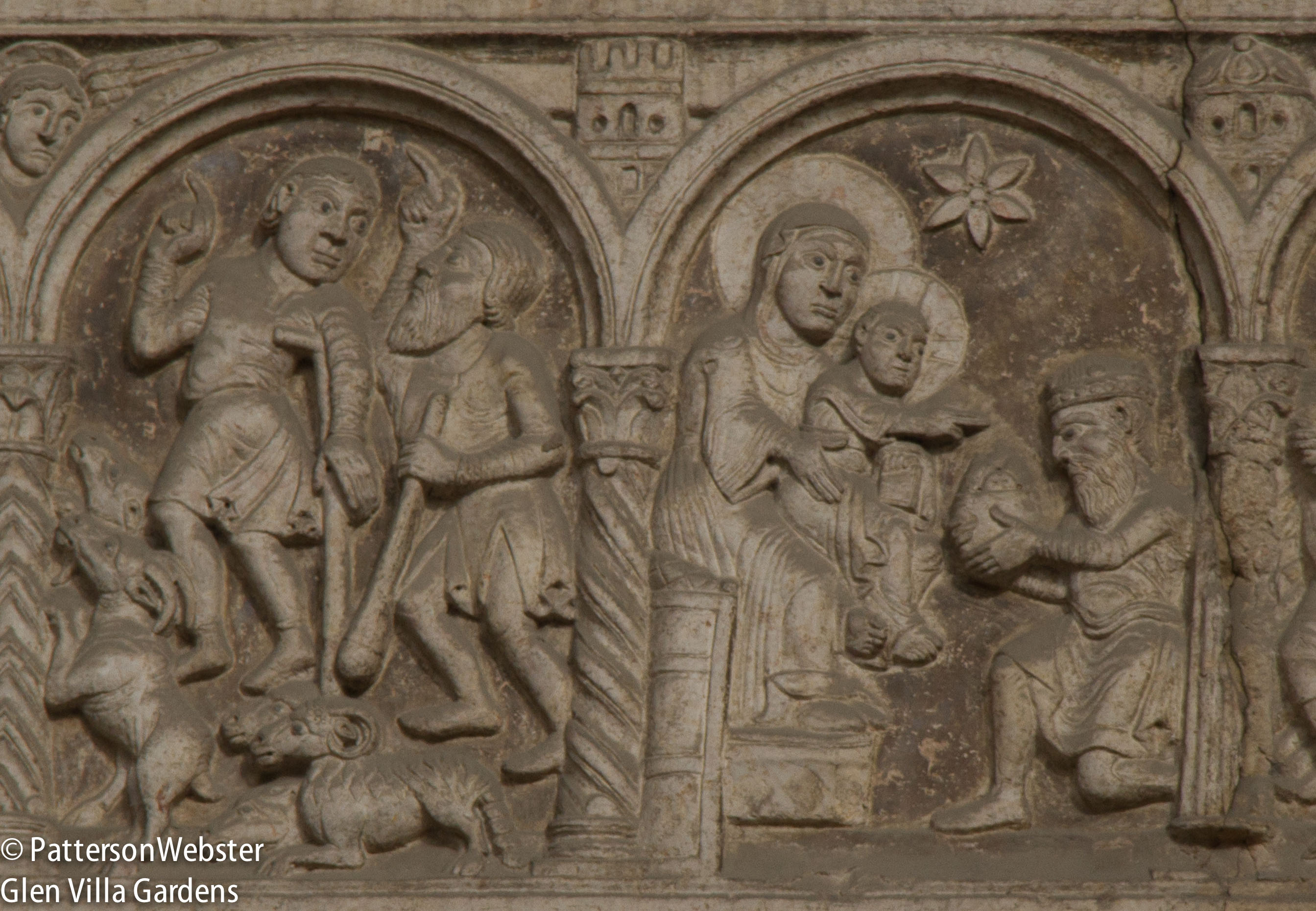 The shepherds look appropriately rustic while the kneeling king looks more grand. The star that guided the kings is a flower in the sky.

The remaining kings appear in the next vignette, followed by the scene of Jesus being presented in the Temple. These scenes are standard fare in medieval carvings, as well as appearing in many paintings from the Renaissance. 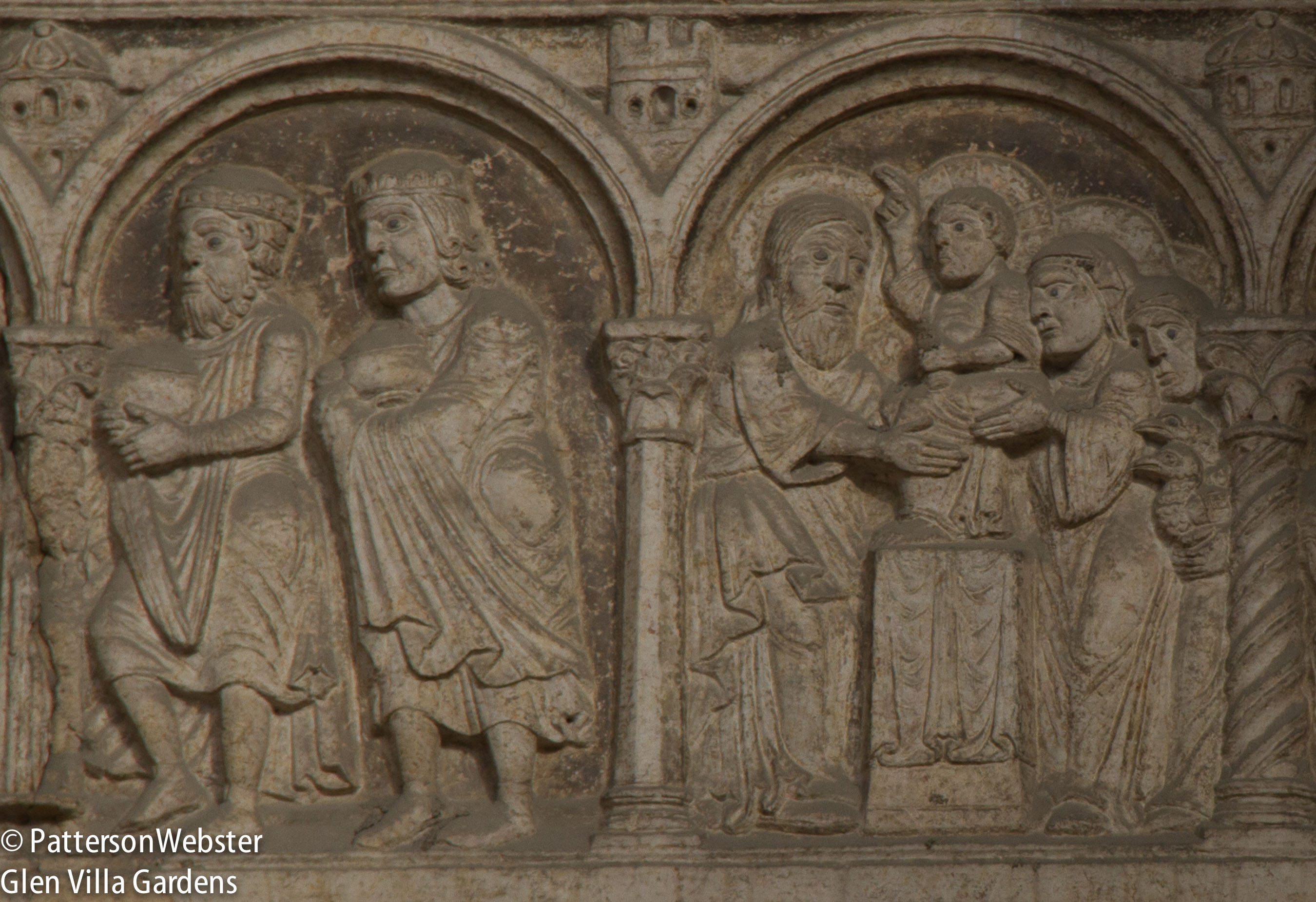 Two kings in beautifully carved draperies appear on the left. On the right is the Presentation in the Temple.

The final two scenes show the Flight into Egypt and Jesus being baptized by John the Baptist. 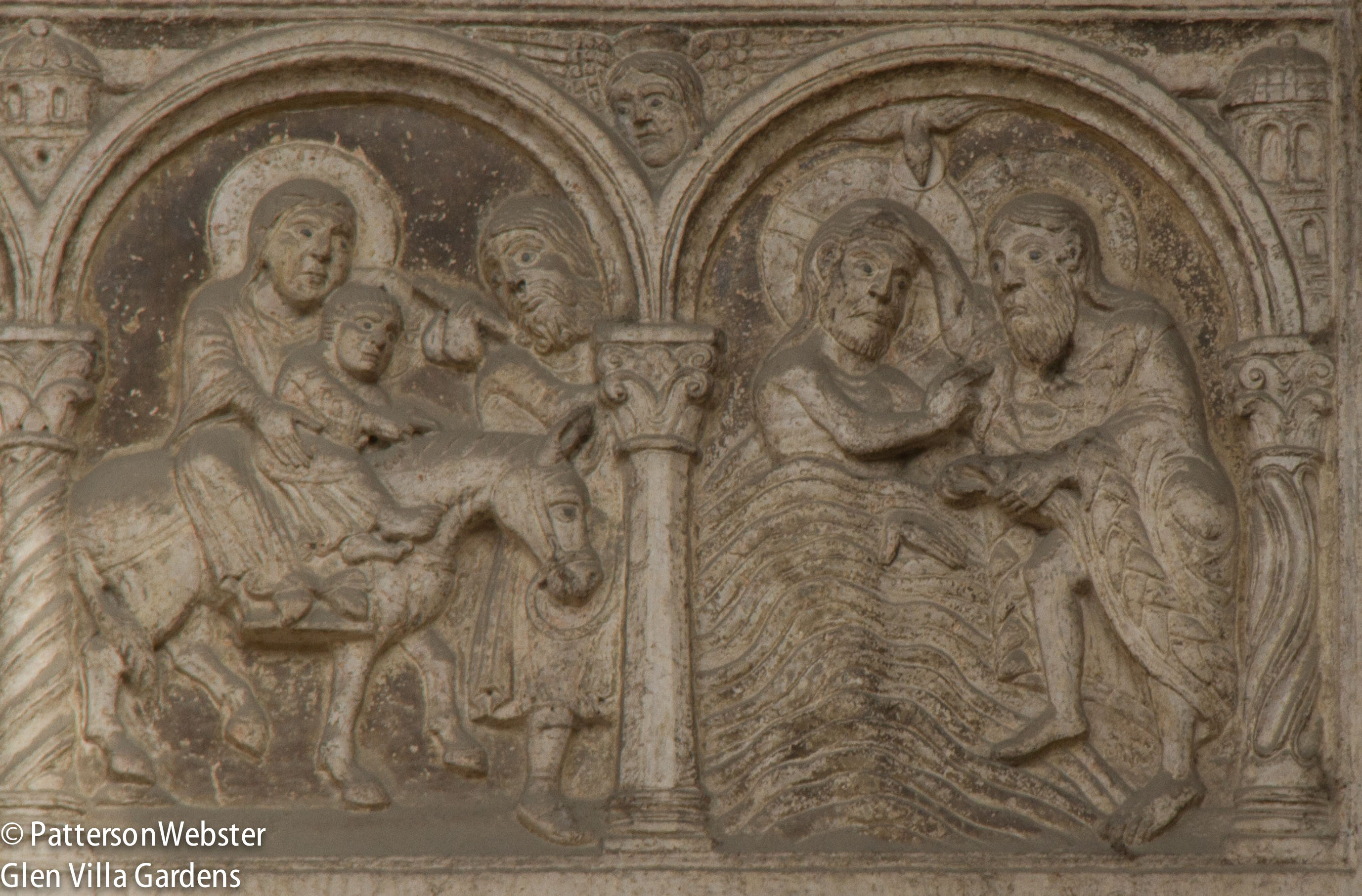 The River Jordan is beautifully  carved, as are the  pillars that separate each scene.

Thanks to digital cameras that allow high resolution close- ups, it is possible to see details of these scenes and to appreciate their beauty and the skill of the craftsmen who created them. The stone carvers obviously took pride in their work. Showing the familiar in personal ways, they gave touches of individuality to many of the figures that appear. An angel must always look angelic, but the men supporting her can grimace realistically as they kneel. 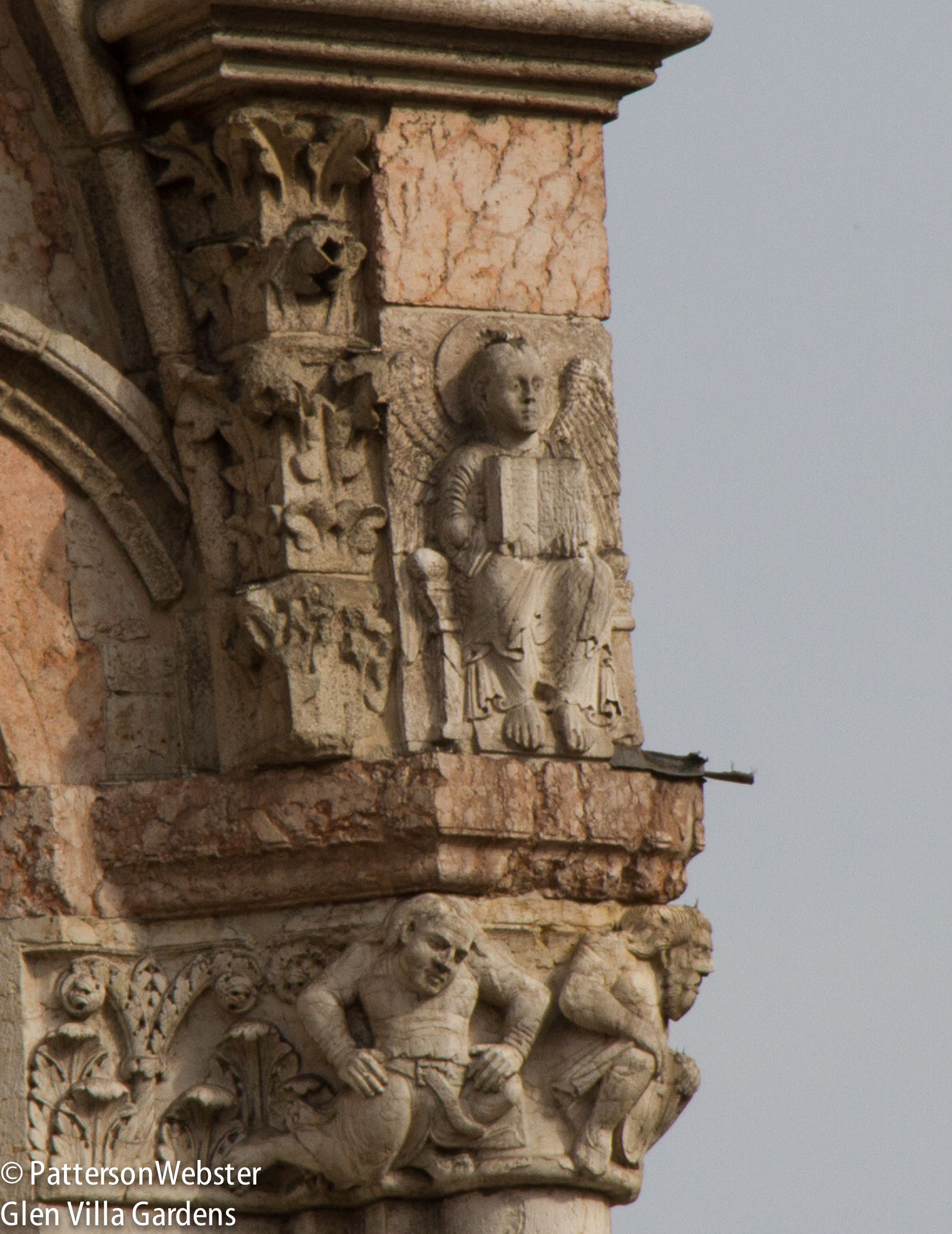 An angel is sitting comfortably. Supporting her are two men bent under the weight of the stone.

Anyone entering the cathedral today must pass between two roaring lions. In the late afternoon, children play outside the door, unafraid, sitting on the lion’s backs or resting by their feet.

Just above the lions are figures who seem to support the entire weight of the cathedral on their backs. On one side an old man appears bent down by the responsibility. 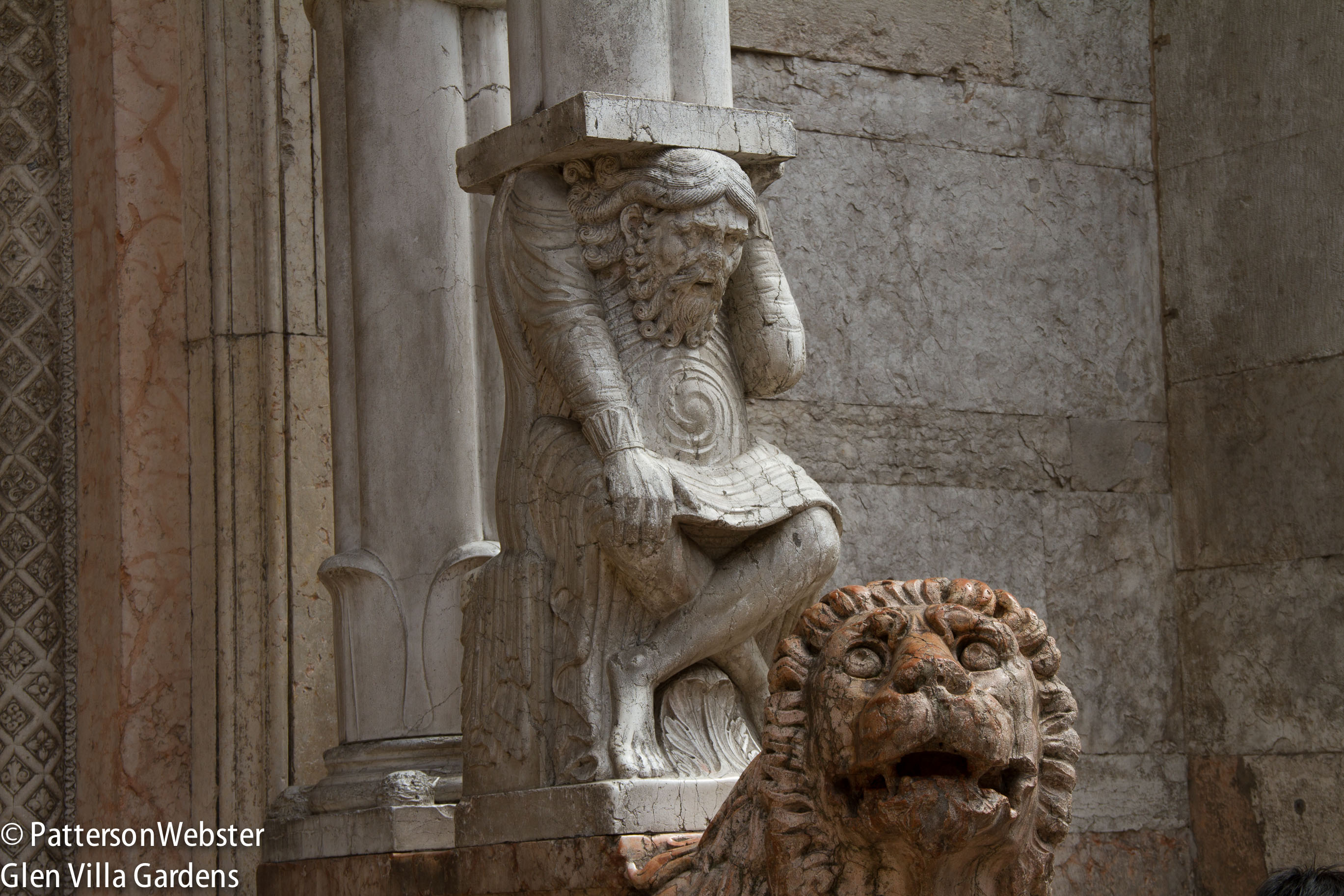 The circles on this old man’s belly suggest a full stomach. Or do I simply have food on my mind? The cuisine in Ferrara is outstanding, in even the simplest of places.

On the other side a much younger man is focused on the job he’s been given to do, determined to hold up his share of the weight. 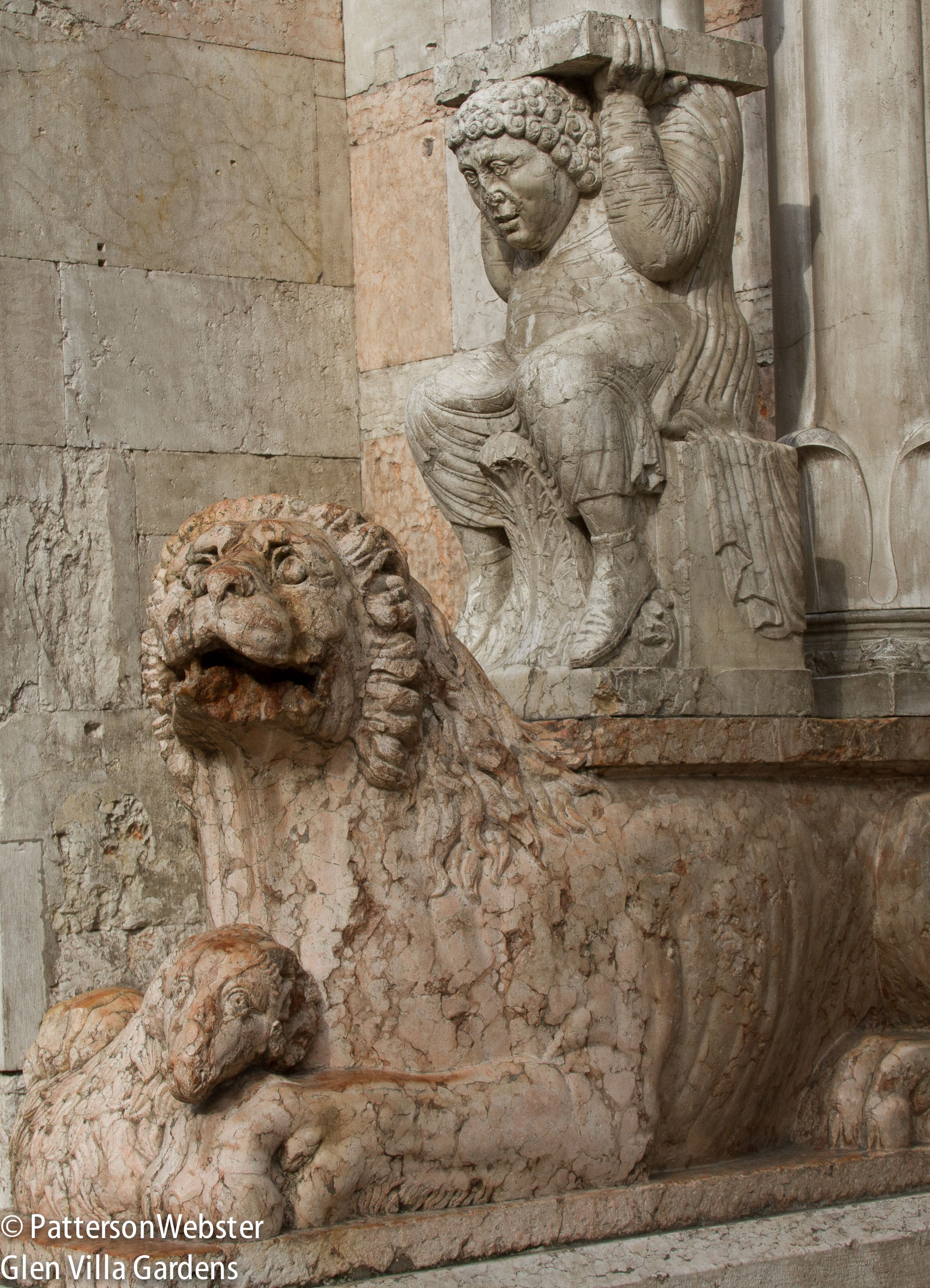 The Bible verse tells us that the lion shall lie down with the lamb. And here he is.

High on the cathedral façade in a fine Gothic loggia, a 15th c statue of the Madonna and Child surveys scenes in the piazza below.

The 15th c statue of the Madonna and Child by Cristoforo da Finrenze was once gilded.

Ferrara is not a standard stop on most tourist agendas. A pity. It is a great city for walking, with some outstanding architectural features —  city walls admired by Michelangelo, the Renaissance Palazzo dei Diamonte, vaulted medieval streets and a vibrant contemporary street scene.  Plus, at this time of year, flowers with glorious perfumes blooming everywhere.  It is a city worth the detour. 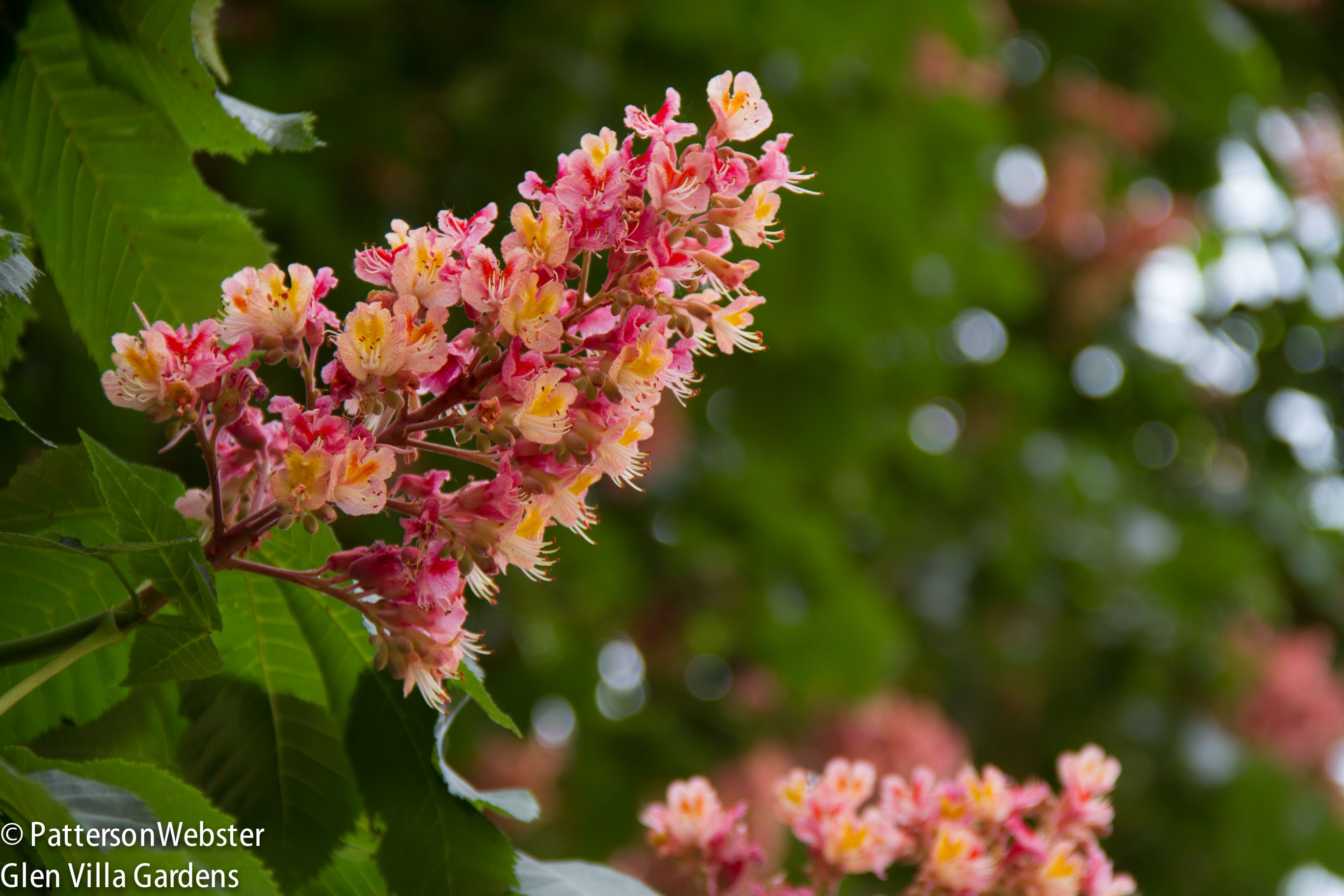 The horse chestnut tree outside my hotel is in full, glorious bloom. Aren’t the colours amazing?