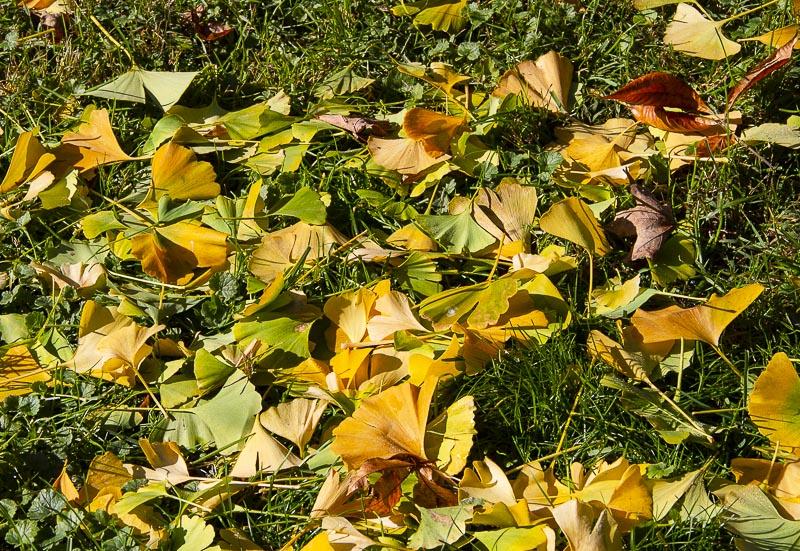 A few weeks ago I visited Innisfree, a wonderful garden in Millbrook, New York which I first visited fifteen years ago. Unless my memory is out of whack, the garden hasn’t changed significantly since then, but I have. In the intervening years, I’ve visited hundreds of gardens around the world, and as I entered Innisfree, I wondered if this broader experience would make the garden a disappointment.

Thankfully, that was not the case. Far from it. The garden was even more inspirational than I remembered, and I came home with a head full of ideas that I began immediately to implement. 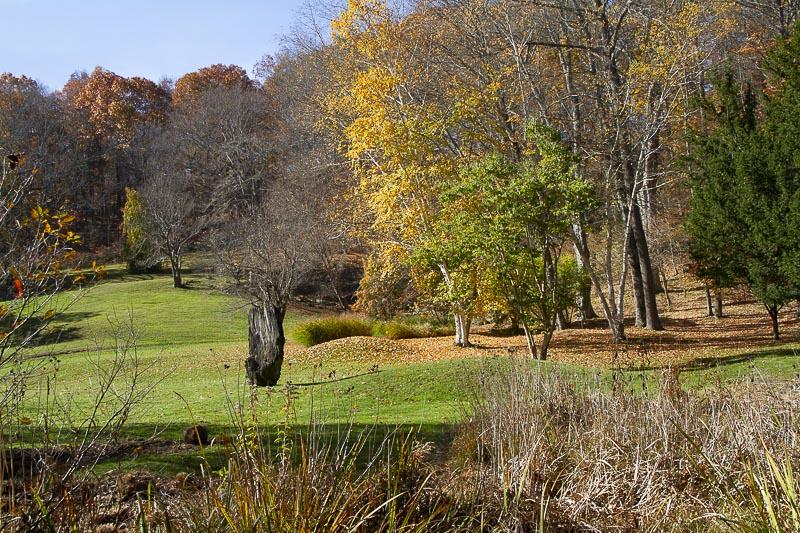 This photo shows the mounds and standing stone that inspired me to do something similar.

The first idea was to add several rounded mounds.

Mounds, or gentle undulations in the ground, occur naturally in many settings but the mounds at Innisfree are obviously deliberate, part of an overall plan for a garden designed over a thirty year period, between 1930-1960, by Lester Collins for Walter and Marion Beck. Walter Beck was an artist who became fascinated by Chinese art, particularly the work of Wang Wei, an 8th century poet, painter, musician and politician who was prominent during the Tang dynasty. Inspired by Wang Wei’s paintings, Beck set out to create a garden that reflected the spirit behind the paintings. He coined the term ‘cup garden’ to describe this design approach, one that segregates views and objects in a way that draws attention to them.

The mounds at Innisfree shape the view and direct the eye to create a focused scene — the sort that is shown in Wang Wei’s paintings.  They are located on a broad open area and the mounds we added at Glen Villa Art Garden are on a similarly flat stretch of grass, near a naturally occurring smooth-topped granite rock. 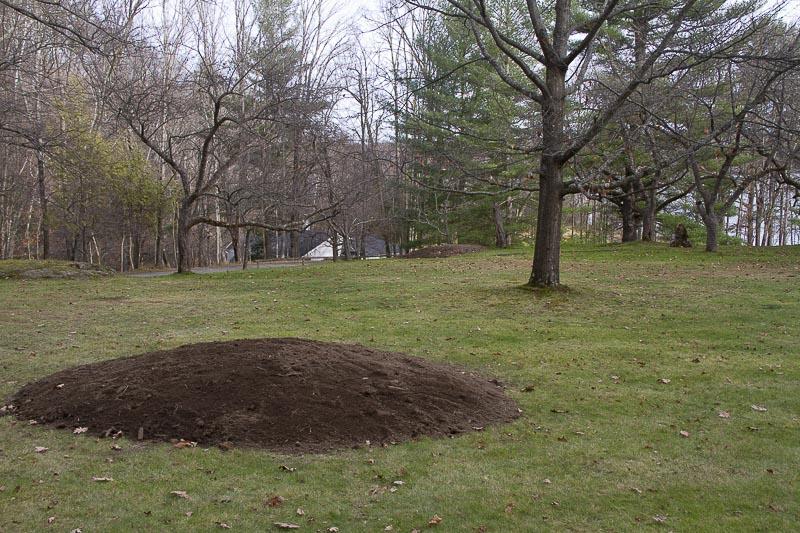 The moss-covered granite rock is partly visible on the far left of the photo.

We added two mounds, a smaller one in the foreground of the photo above and a larger one farther away. In the spring we will seed both to make them blend into the grass around them. The soil may settle over the winter and if they appear too small in the spring, we will enlarge them. But for now, I’m content with the size and shape.

To the right of the second mound, the one in the background of the photo above, we placed a craggy triangular rock. It is smaller and less imposing than the standing stone at Innisfree, but the space I was working with is also smaller. Seen from different angles, the mounds, the existing smooth outcrop and the triangular stone create an interesting tension that will, I hope, add interest to this area throughout the year. 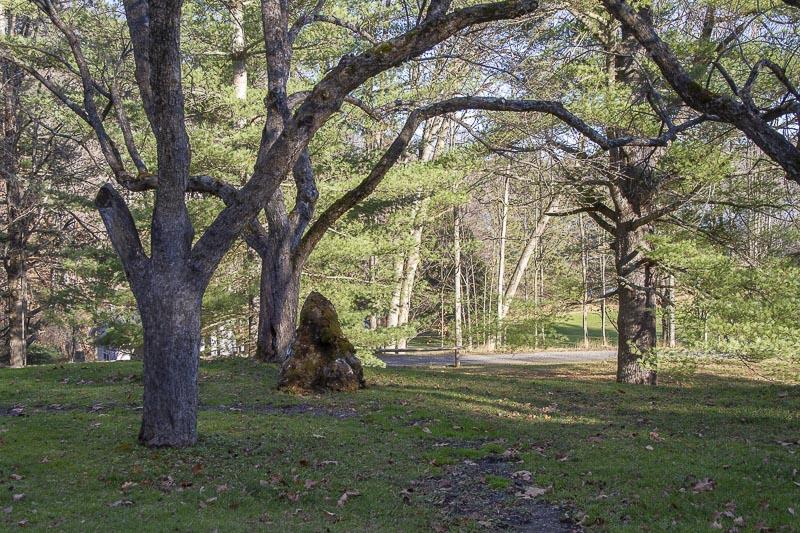 Old crabapple trees surround this newly-added rock to create something reminiscent of a cup garden.

The second inspiration from Innisfree came from seeing the autumn splendour of ginkgo trees whose leaves were a golden yellow as rich as a mouthful of butter. 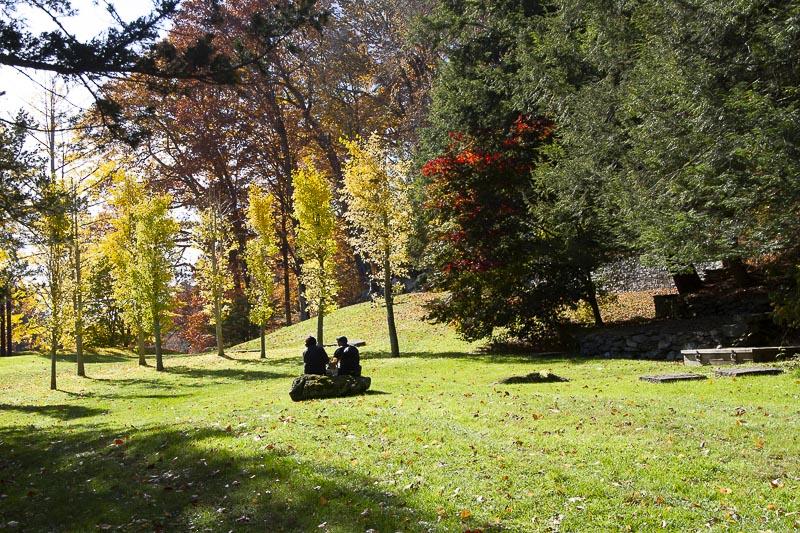 According to Kate Kerin, the head of horticultural at Innisfree, these columnar ginkgo are probably Princeton Sentry.

My photo doesn’t do justice to the impact the trees had, but believe me, they were magnificent. As were the fallen leaves.

I liked the way the columnar ginkgo trees at Innisfree were grouped, and clearly I had liked them on my previous visit as well. When I reviewed my photos of that trip, there they were. 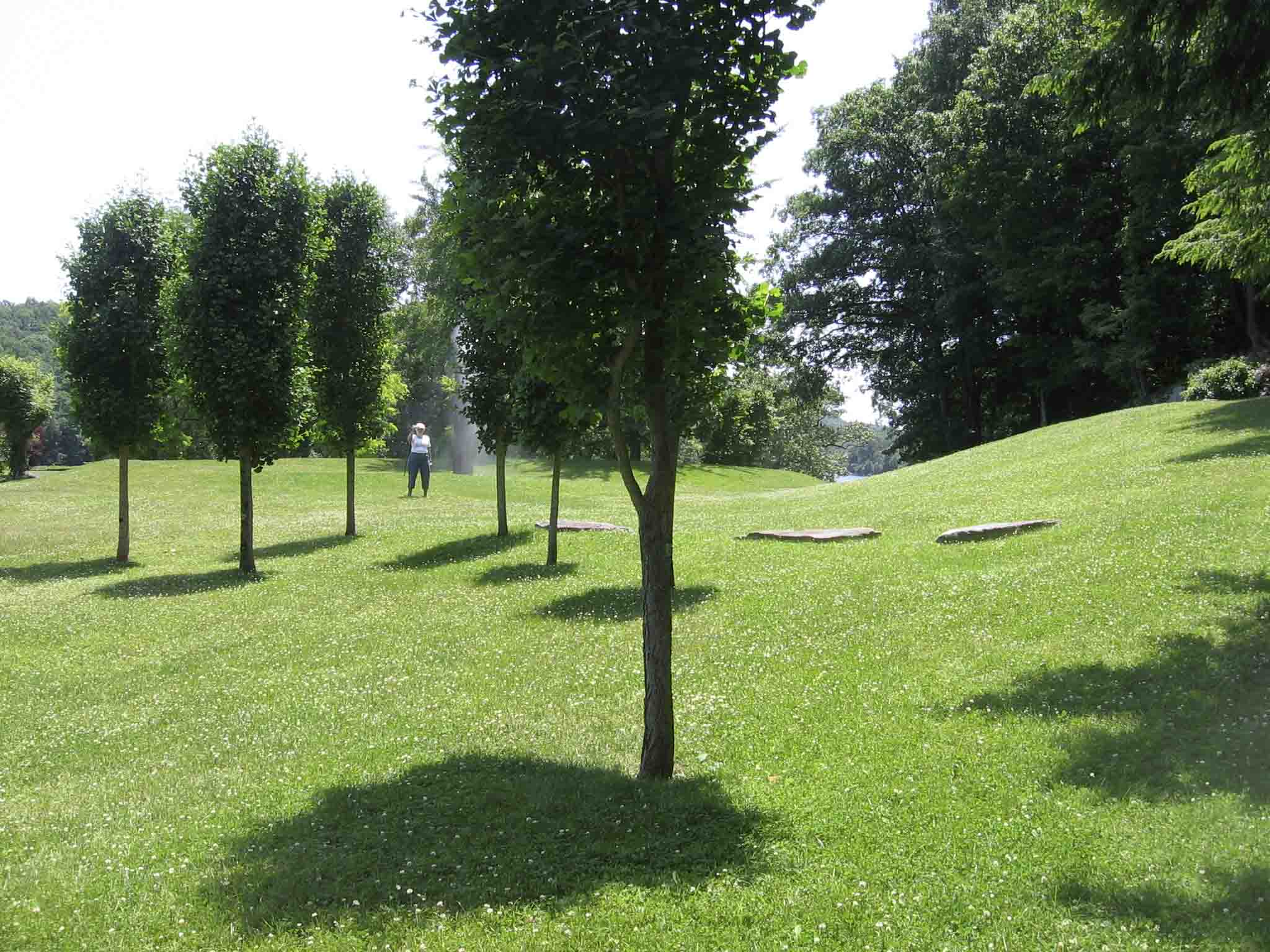 I knew I wanted to arrange the trees at Glen Villa in a similar grouping and I was lucky to find what I hope will be the perfect spot. 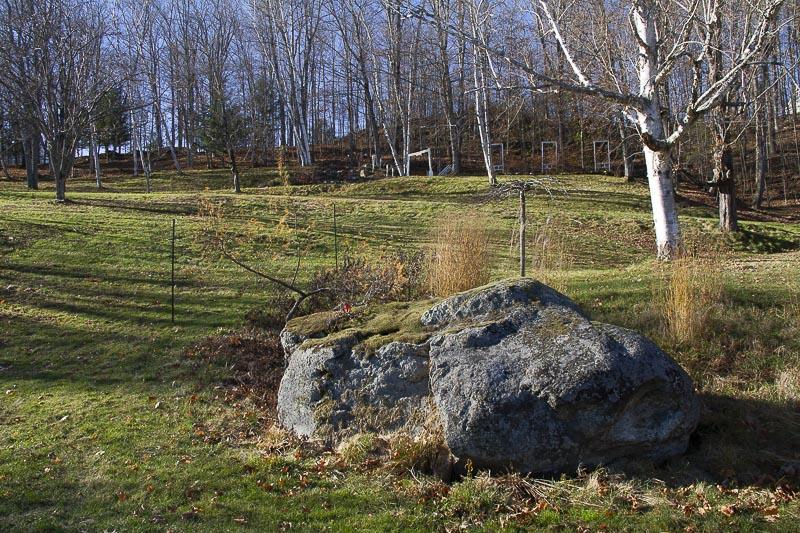 Five ginkgo trees arrived this week and are now planted close to this big rock — stakes show where two of the five trees now stand. A third ginkgo replaced the small weeping tree that appears in the photo above. Here, in the photo below, is that tree in its new home, near a rocky outcropping in my daughter and son-in-law’s garden. 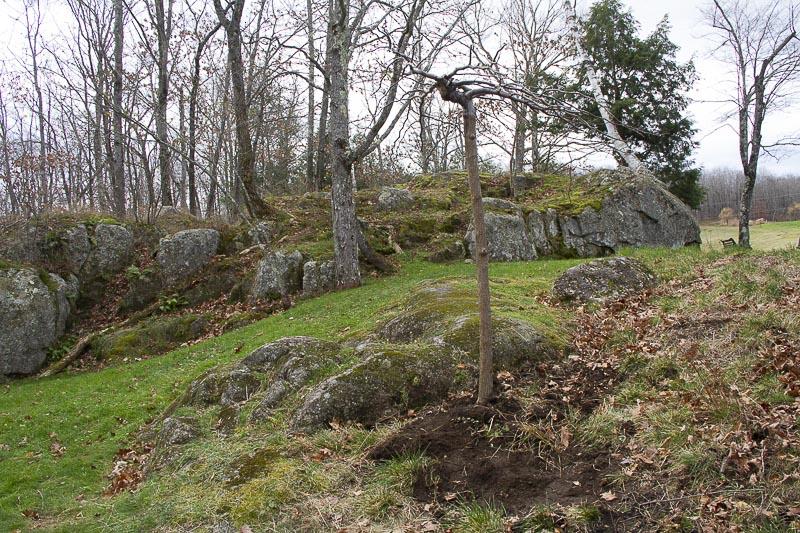 The trees arrived along with the first snowfall of the year and we planted them even as the snow continued to fall. 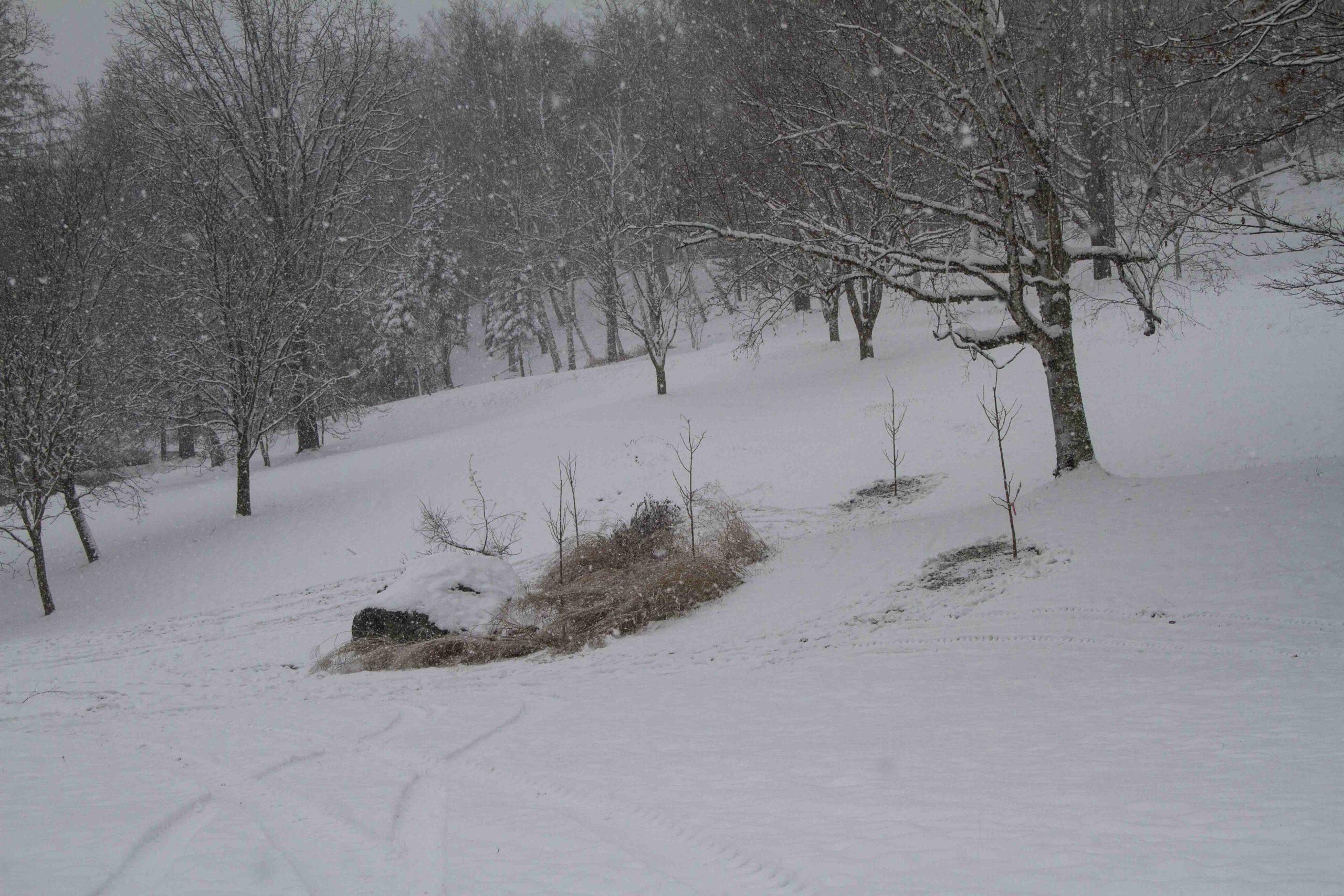 New trees for me signal new beginnings. I’m hoping these new arrivals will settle happily into their new home despite their chilly welcome!

My experience is that the ginko does not turn yellow while they are young. My ginko has been planted for 8 years. It is about 15 feet and this is the first year it turned. Beautiful.

I’m sorry to hear that, Sherry. I hope I won’t have to wait as long.