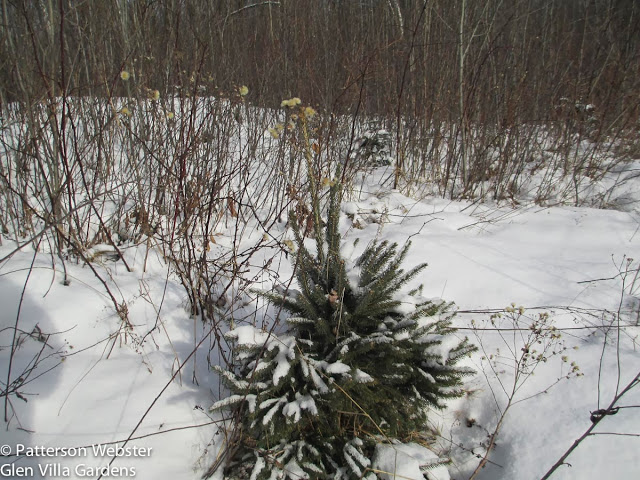 The end of January isn’t the obvious time to do a year-end review, but since 2013 is well and truly over,  it’s now or never. And since next week marks the one year anniversary of this blog, and I plan to review some of the top posts and your comments about them, writing a month by month review of what happened this past year at Glen Villa seems a reasonable idea.

The tiny evergreen seedlings we planted four or five years ago in an area I call the water meadow are finally beginning to show promise. It will be many years yet before they can be called trees, but at least the tops are now higher than the snow.

Snowshoeing, we saw lots of animal tracks, including these from wild turkeys. Turkeys now appear frequently, and are becoming less and less afraid of human contact. (See November for proof.)

The snowdrops divided and planted in 2012 came up in a very satisfying fashion. Next year they should be better, forming a true river of white. Thank you for the idea, Cold Climate Gardening!

The daffodils on the berm beside the skating pond came up in full vigour. I don’t like how they look, as if arranged in neat little rows. I don’t know how to change them except by digging up every bulb and re-planting. There has to be a better way. Suggestions, anyone?

I made two modifications to the hotel re-creation that I call the China Terrace. Most successful was the moss-covered bedspread, with moss grown to order by Bryophta, a fairly new company based in Quebec.

Less successful was the new staircase to the imaginary second storey of the recreated inn. Using only copper tubing was a mistake — the staircase looks too flimsy in the open air. The copper tubing needs to be stronger visually so I’ll add some white wooden railings or banister posts in 2014.

Returning from a garden tour of England, I was inspired to straighten some curves and add edging to the extension of the border in the lower garden, and…

to straighten and edge the walk from the garage to the house. I am pleased with both these changes.

The big project for the summer — and the big headache — was the aqueduct. We worked throughout July and well into August to locate and plug leaks in the system.

This involved a lot of digging — more than I want to remember.

August saw us working to correct a problem at the Skating Pond in the upper field. This is a long story that I’ll tell you about in another entry. Thankfully the problem here did not involve leaks. Instead we contended with sliding mud.

In August we also finished installing the deer fences I designed, putting them in the upper field and in the meadow.

In September, when the aqueduct finally began to work, we added two bead curtains to control the flow of water and to prevent unnecessary splashing.

With the aqueduct operating, it became clear that the project needed a proper ending, not a climax but rather a conclusion that was in keeping with the elegance of what we’d added. The little round rock-edged bathtub of a pool that sat above the boathouse would have to go. Or would have to be altered. We staked out a new shape and…

began work. We didn’t quite finish the project in the fall so that’s a loose end waiting to be tied in 2014.

Luckily the weather stayed reasonably good through most of November, allowing me time to install a major sculpture I made for a neighbour. The turkeys at the neighbour’s house weren’t at all sure they liked what we were doing.

The sculpture Coup de Foudre, which literally means lightning bolt, stood tall and proud under its first snowfall. Commissioned by a family whose house was destroyed by lightning, the name and form of the sculpture acknowledge that event while also underlining the metaphoric meaning of the phrase, love at first sight.

The sculpture stood tall and proud but the trees did not. They drooped, cracked, and broke. The damage from ice storm 2013 is enormous, and already the air is filled with the sound of chain saws and the sight of broken branches pushed to the side of trails.

I wish 2013 had ended with blue skies, glorious white snow and no ice, but after reviewing the year as a whole, I’ am content with what we accomplished. My hopes are high for 2014.