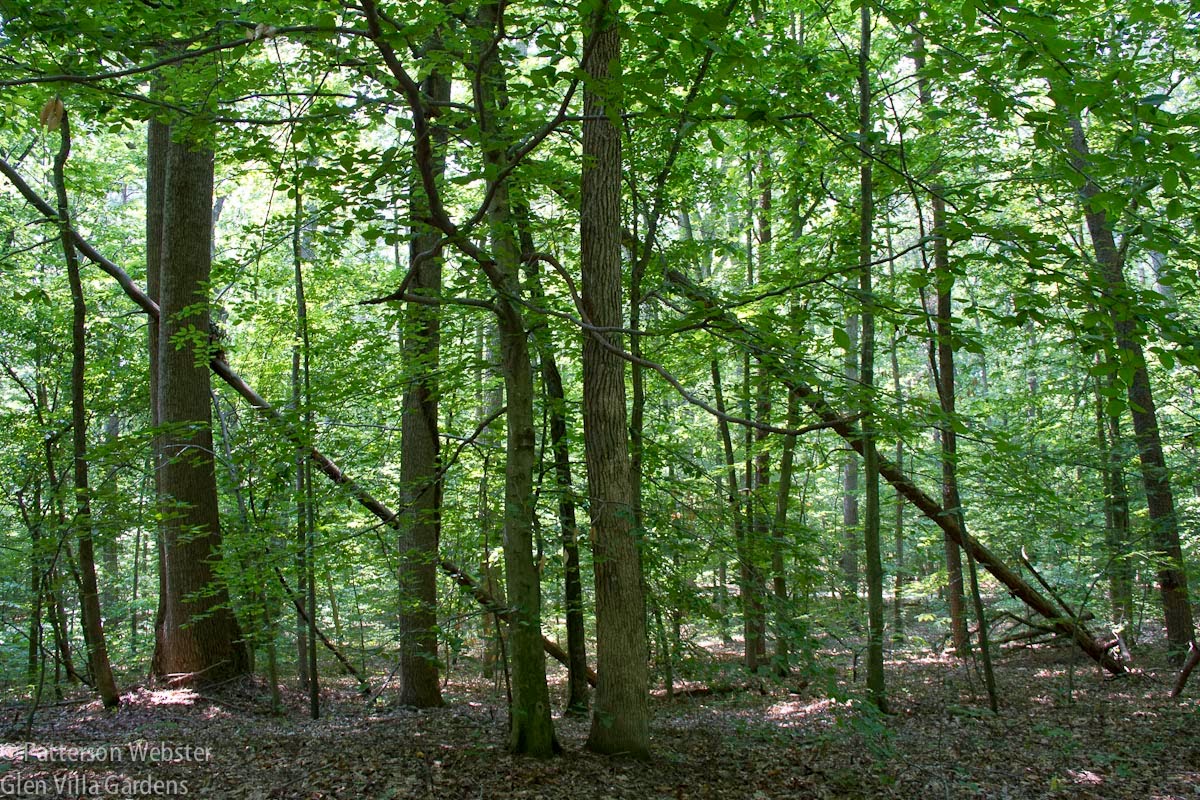 A few months ago Don Stratham, a New York state garden consultant, wrote a blog post about garden mishaps, or learning from failures in the garden, in his blog called Rooting for Ideas. He listed some of his mistakes — and what they had taught him. But what his post made me think of was the importance of observation itself, and of taking note of what you observe.

I saw this forest scene a few years ago and was immediately struck by nature’s artful composition. The contrast between the upright and diagonal tree trunks gives me pleasure whenever I look at the photo or remember the moment I spotted it.

Remembering the scene is one thing. Taking note of why it works is another. Then acting on it… that’s the crucial step.

Photographs are a great way to observe, to take note and to remember. But only if they are honest photos, that show you what really is, rather than photos taken to make a planting area look better — more photogenic, as it were.

Consider this scene from Glen Villa. As an example of autumn colour, it’s hard to beat.

But the reality of the larger picture is less appealing.

The second photo is actually helpful. It shows me what is there and suggests what needs to be done to enhance the rocks and surrounding area. Which is, remove all the extraneous vegetation and plant the perfect tree, one that twists in a way that suggests old age, a fitting tribute to the rock and the site.

I take photos of my garden regularly (make that constantly) and use them to help analyze what I see. Photos help me to track the growth (or demise) of particular plants, to record how plant combinations work over a season of growth, or over several seasons, or simply to remind me of a job that needs to be done.

Photos can be inspirational. Some years ago I added tangled barbed wire to some of inverted ash trees I call Abenaki walkers. They are part of an art installation that tracks the history of the Abenaki Indians in the Eastern Townships. The barbed wire and split rail fence mark the arrival of European settlers and the enclosure of land that previously was open and free.

Photographs told me that the barbed wire wasn’t strong enough visually, so this past fall I added more.

I thought I’d added enough. But when reviewing photos of a trip to Spain, I came across a picture I took outside the Tàpies foundation museum in Barcelona. This tangle of wires makes the point in spades. (Or in heavy cable.) So in the spring I’ll tangle some more wire, and probably add some thicker cable first.

As useful as photos are, eyes are even better. That is, if you use your eyes and then pay attention to what you see.

Look up. You could spot an amazing tangle of branches…

or criss-crossing lines of contrail clouds.

or mowing patterns highlighted by frost.

(This last photo reminded me of photos I’ve seen of ephemeral garden art created in England by Chris Parsons: he sweeps dew into complex patterns that disappear when the sun comes out.)

Observing the landscape can give us important information. This arrangement of boxwood balls, for instance. To my eyes it’s a failure. It feels arbitrary. There seems to be no reason for the arrangement. The shrubs look like someone plopped them down because they couldn’t think of anything better to do. And the lines aren’t straight.

Grid plantings can work really well. Here, the lines are straight, and the boxwood balls have room to breathe. (Although I can’t say I like the ground cover around them. I’d use something less distracting.)

Boxwood balls are on my mind at the moment and I’ve been reviewing photos of them I’ve taken at various gardens. I particularly like these, at le jardin plume in France.

Paying attention: that’s the key. Reviewing these photos, I note that, with the exception of the two pictures illustrating how photographs can lie, they all deal in one way or another with lines. Straight lines, curving lines, diagonals. So, what’s up? Am I onto something, or did I simply pick these images at random? I’m not sure… I’ll have to think about it.
Categories: Design, People, TravelBy glenadminJanuary 12, 20146 Comments
Tags: Abenaki WalkingAdkins ArboretumblogChris ParsonsDon StrathamGlen Villajardin plumeobservationRooting for IdeasTàpies
Share this post
Share on FacebookShare on Facebook TweetShare on Twitter Pin itShare on Pinterest Share on LinkedInShare on LinkedIn

Thank you for increasing my vision in appreciation of nature’s beauty!

Hi Pat, I think this is a topic we could keep adding to. I found it interesting your wire sculpture and then finding a similar image at the Tàpies foundation museum in Barcelona. I agree with your observations of the box woods too. I am always curious why does this work and that doesn’t. I thought the rock and the grass photo was not as intriguing because it felt like a little island floating in a sea of grass where your autumn foliage shot had a intimate relationship to the forms in the photos. I try and avoid those floating islands of plants in a large lawn. It’s nice to see the failures next to the successful photos. Best, Don Statham

Don, thanks for your comments… and apologies for mis-spelling your name!

Thank you for introducing me to Don Statham’s blog. I wonder if I met him the one time I visited the Franklin Garden Club?

Blogging is a good way to share ideas and contacts, and to make friends by long distance. I feel like I know people I’ve never met, whose blogs I read. The only question is how much time to devote to reading them!