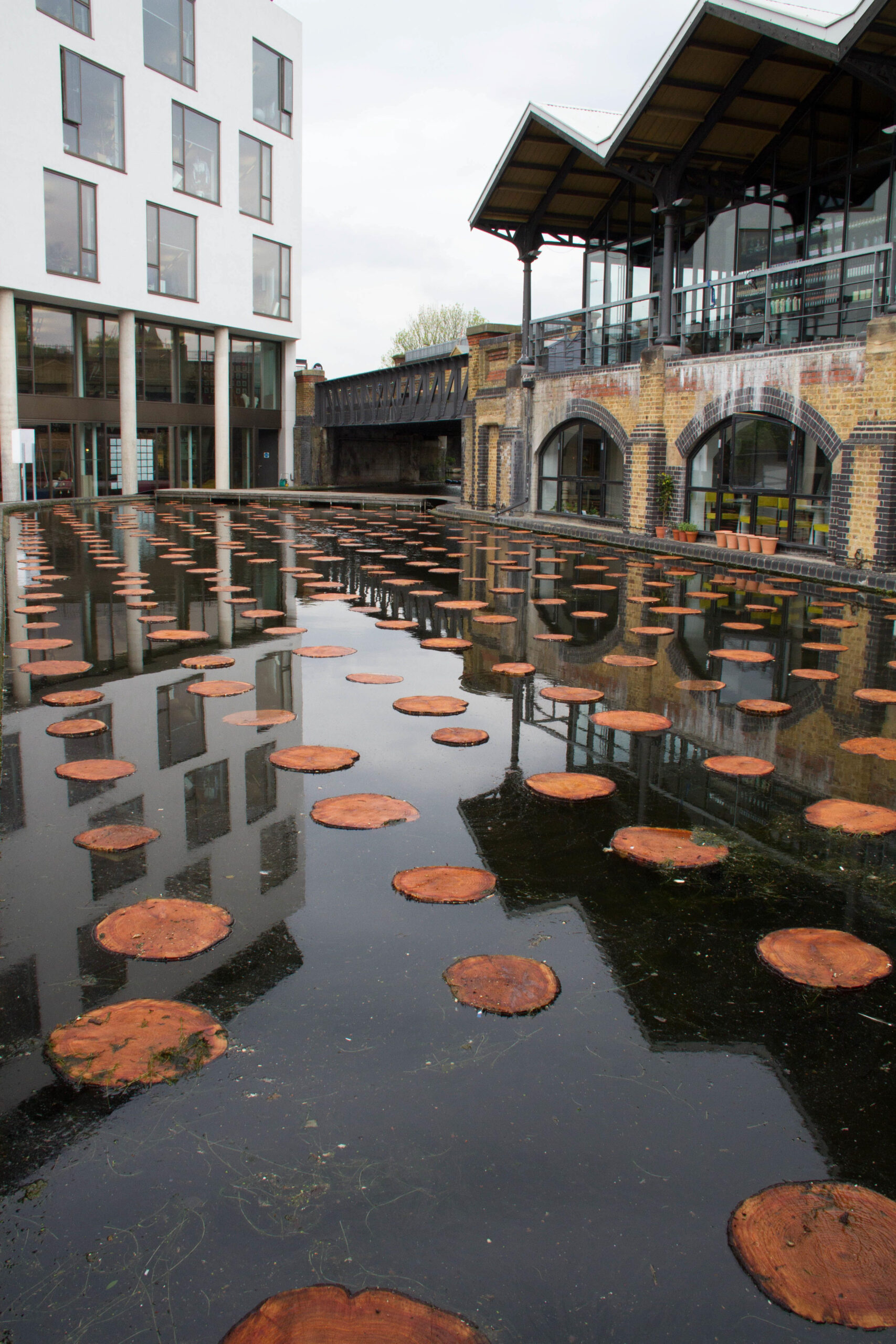 Last week was very unusual — after a summer of isolation, living inside a family-only bubble, two groups of visitors came to tour Glen Villa.

One group came from NIP Paysage, a landscape architecture firm in Montreal whose name reflects its approach to every project it undertakes. To understand, you need to know that NIP is the French acronym for a PIN, or Personal Identification Number. So, as its website states, “NIP aims to reveal the true character of the environments upon which it intervenes.”

I first met two of the principals of the firm, Michel Langevin and Melanie Mignault, in 2012 in London at the inauguration of the Chelsea Fringe Festival.  To promote Les Jardins de Métis and its International Garden Festival, the firm designed one of the most intriguing installations at the Fringe, a fact recognized when it was chosen to be the Festival’s opening venue. 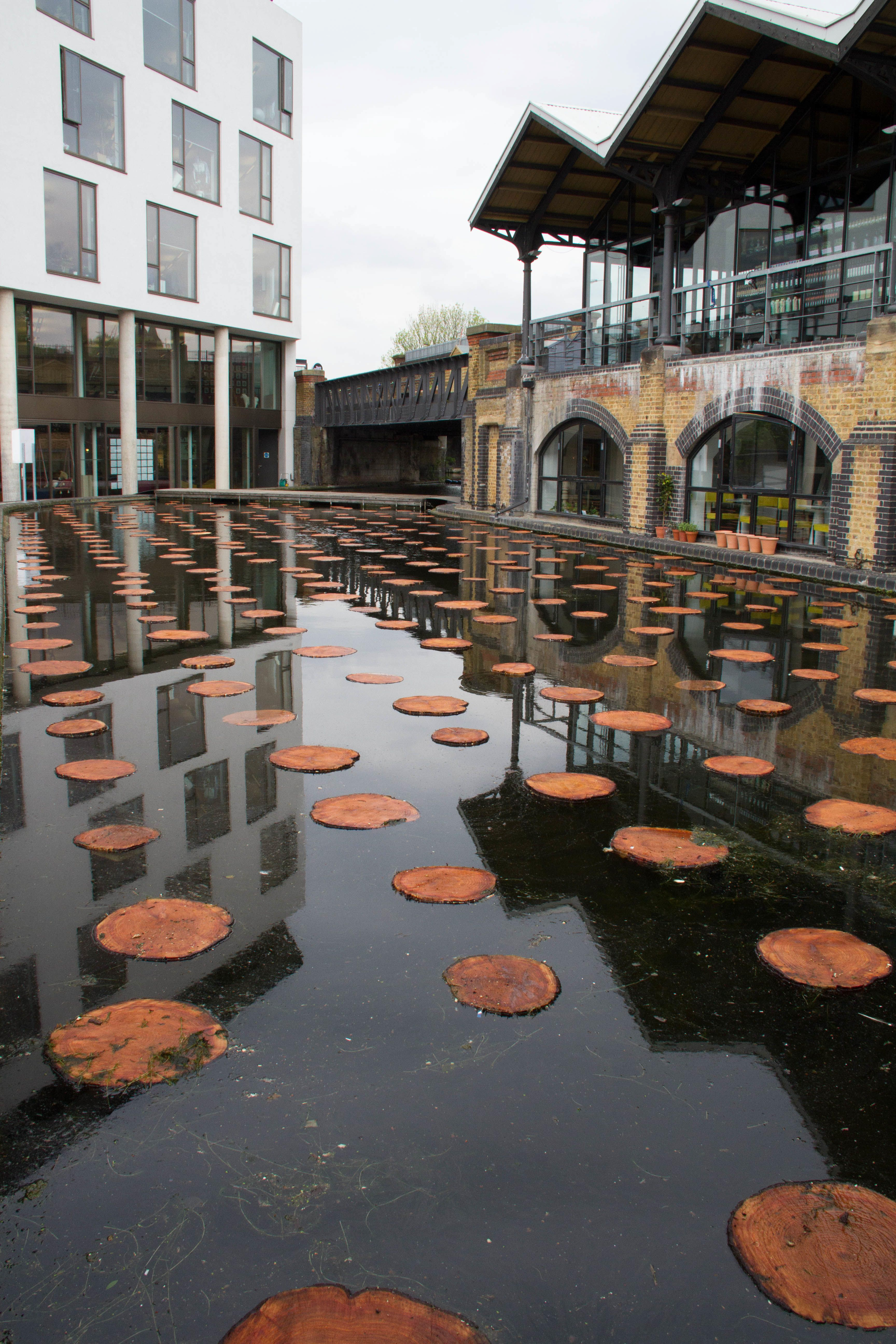 My photos fail to do justice to this spectacular installation. Set among industrial buildings, Floating Forest harkens back to the timber trade between Canada and Great Britain.

Floating Forest consisted of 450 slices of tree trunks floating on the dark waters of the Grand Union Canal. There, held in place by cables that allowed only minimal motion, the wooden circles created the impression of a mysterious forest hidden under water, swaying slightly in the breeze. 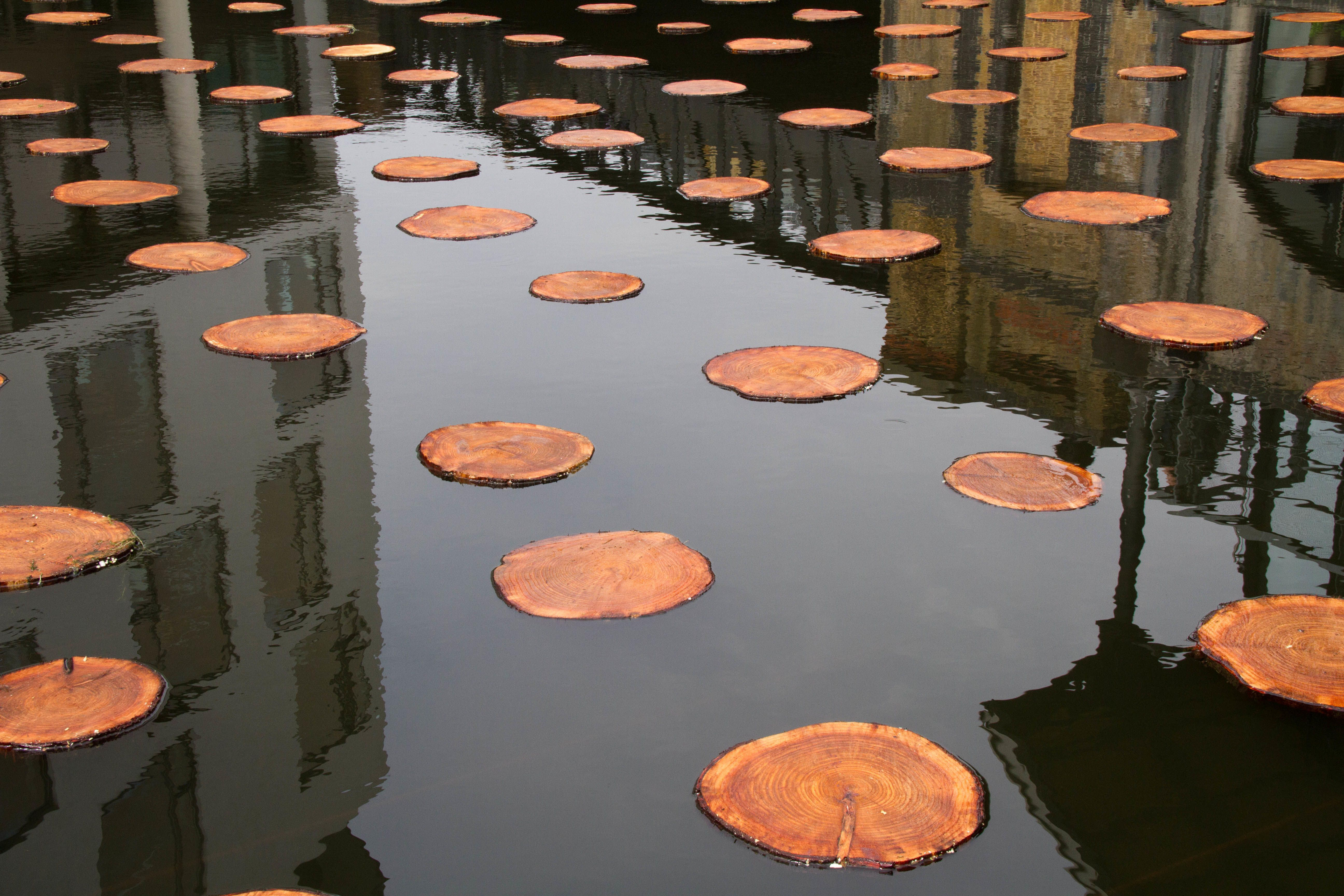 I met Michel and Melanie again five years later at the International Garden Festival in Métis when I was visiting the gardens there with two granddaughters. 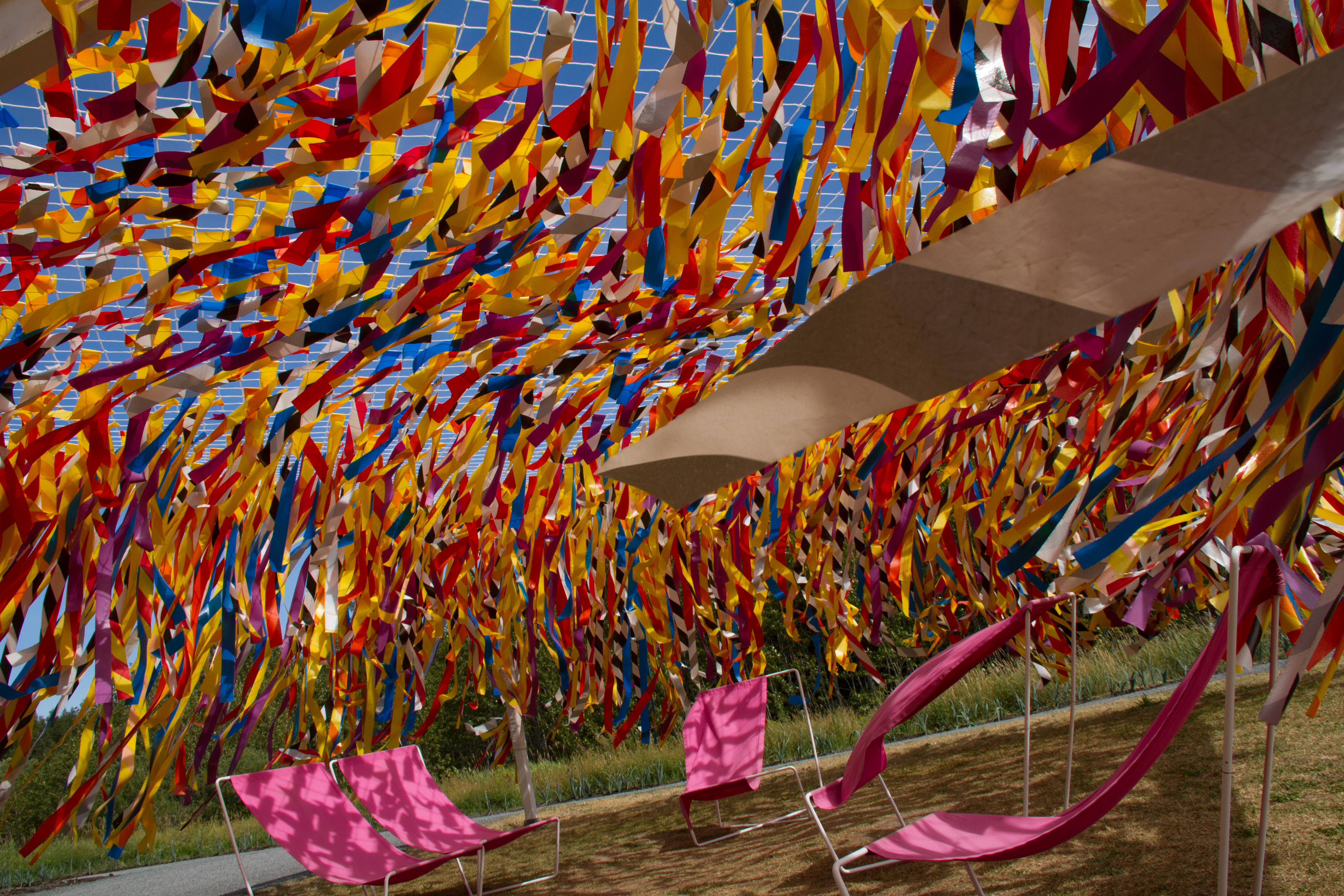 The granddaughters and I enjoyed this exuberant installation. The Vertical Line Garden, by Coryn Kempster and Julia Jamrozik, is now installed on the roof of the Musée de la Civilisation in Quebec City.

I met Michel and Melanie for a third time this week at Glen Villa. Along with a dozen members of their team they brought morning snacks, a delicious lunch from our local eatery, the wonderful Saveurs et Gourmadise, and lots of sharp, well-informed eyes.  It was a pleasure for me to welcome them and to hear their observations about the garden and art installations that make up Timelines. 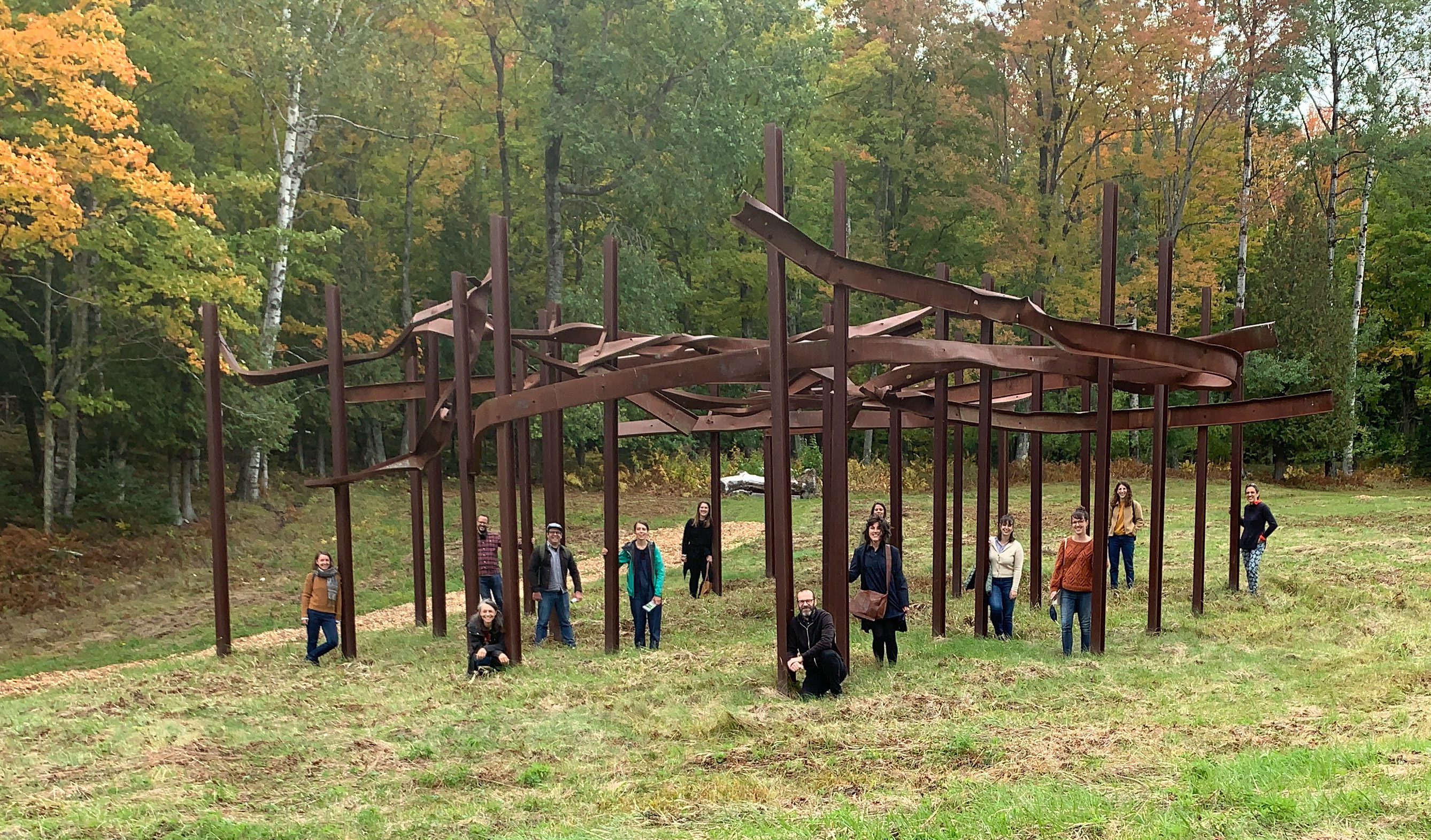 The team from NIP Paysage stand beside Bridge Ascending, a sculpture by Quebec artists Louise Doucet and Satoshi Saito.

To see them next to the Big Chair that the firm designed was a special treat. 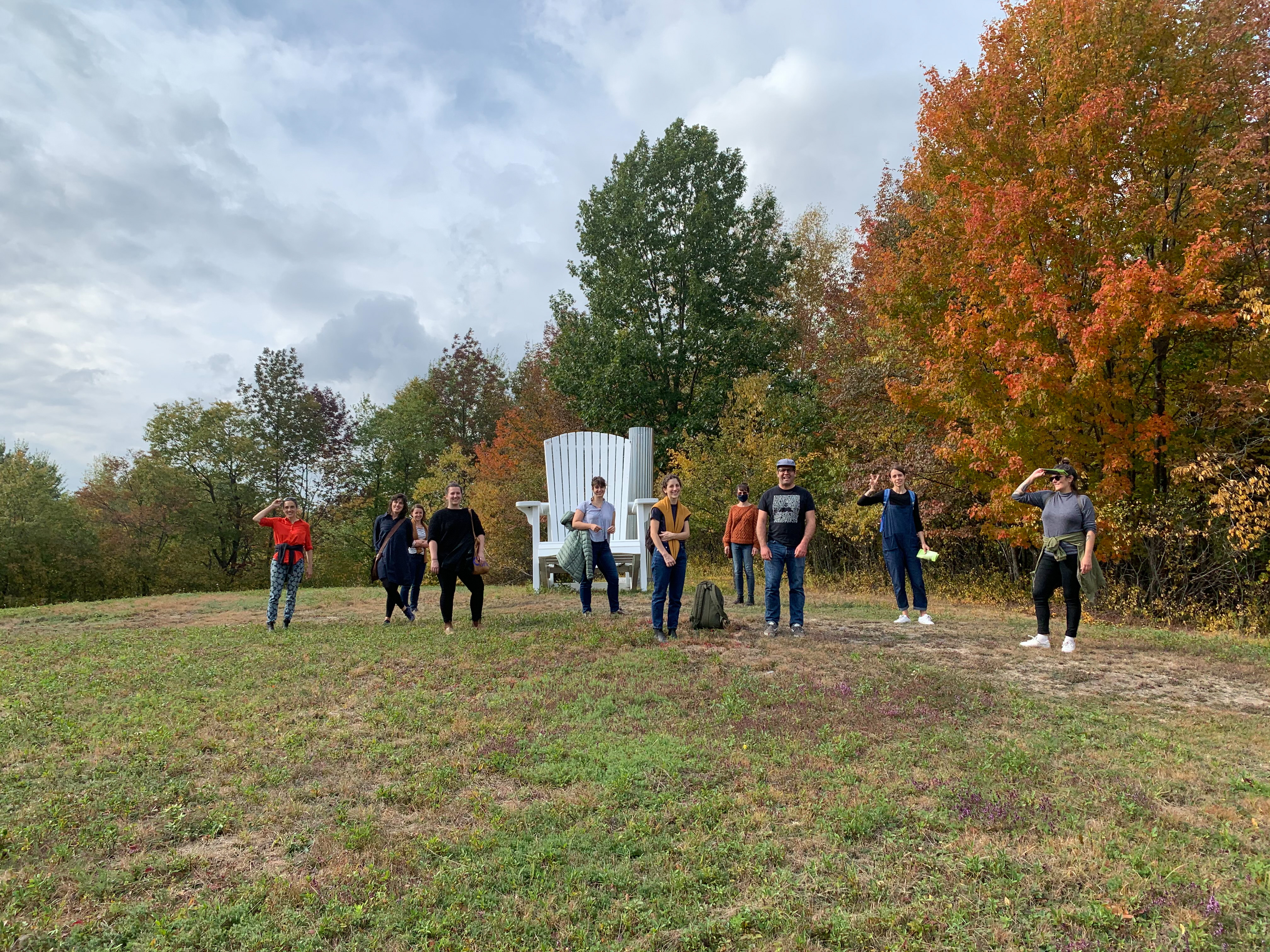 I first saw the Big Chair at the entrance to the Reford Gardens in Metis. I knew immediately that I wanted one for Glen Villa. And here it is!

Paul Carignan and his partner Sylvia Bertolini were my other visitors. After seeing Paul’s installation on the Tomifobia Nature Trail, I was more eager than ever to have him and Sylvia come for a visit, not only to get to know them better but also to show them  the installations I’ve created that relate to the Abenaki and their presence on the land. When Paul began to drum among the first group of Abenaki Walkers, the inverted ash tree branches that remember the original inhabitants of this part of Quebec, I couldn’t have been happier or felt more comfortable about the installation I created. 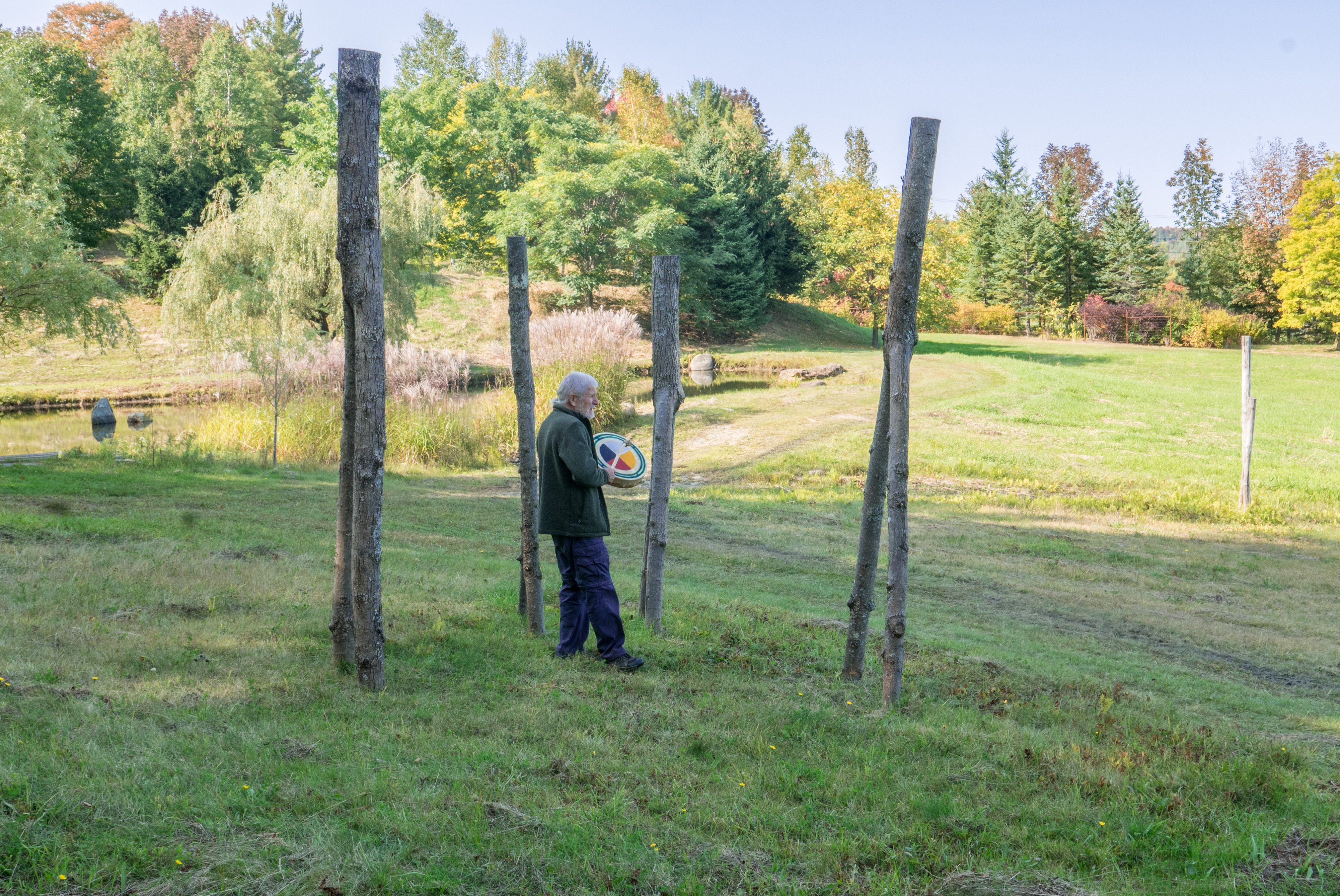 Equally satisfying for me was to show Paul and Sylvia other parts of Timelines that relate to the Abenaki. The turtle who rises from under the water to create Turtle Island … 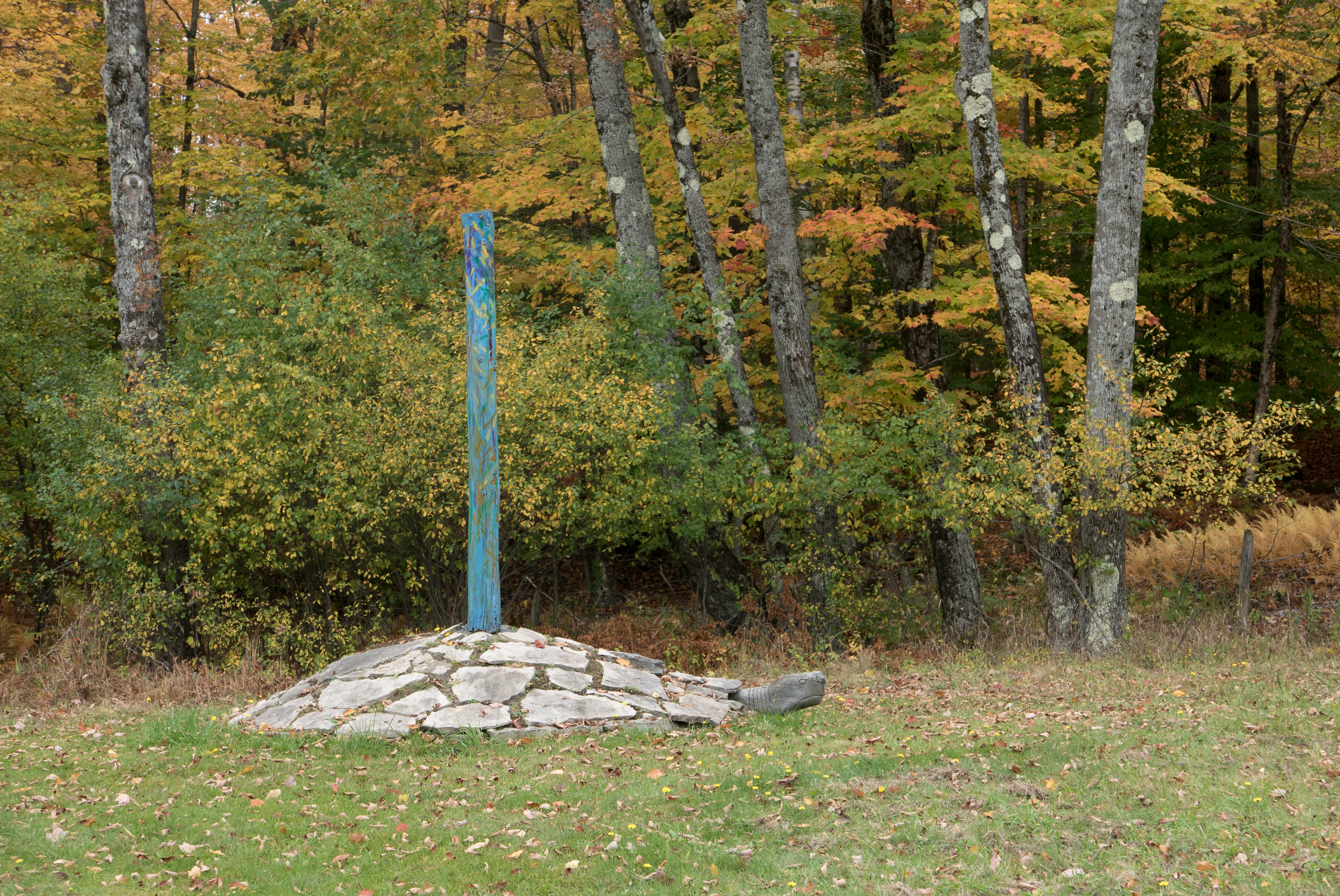 The painted post on the turtle’s back represents the chaotic, unformed world which the rising turtle is pushing away.

… the painted posts that suggest people walking through the woods … 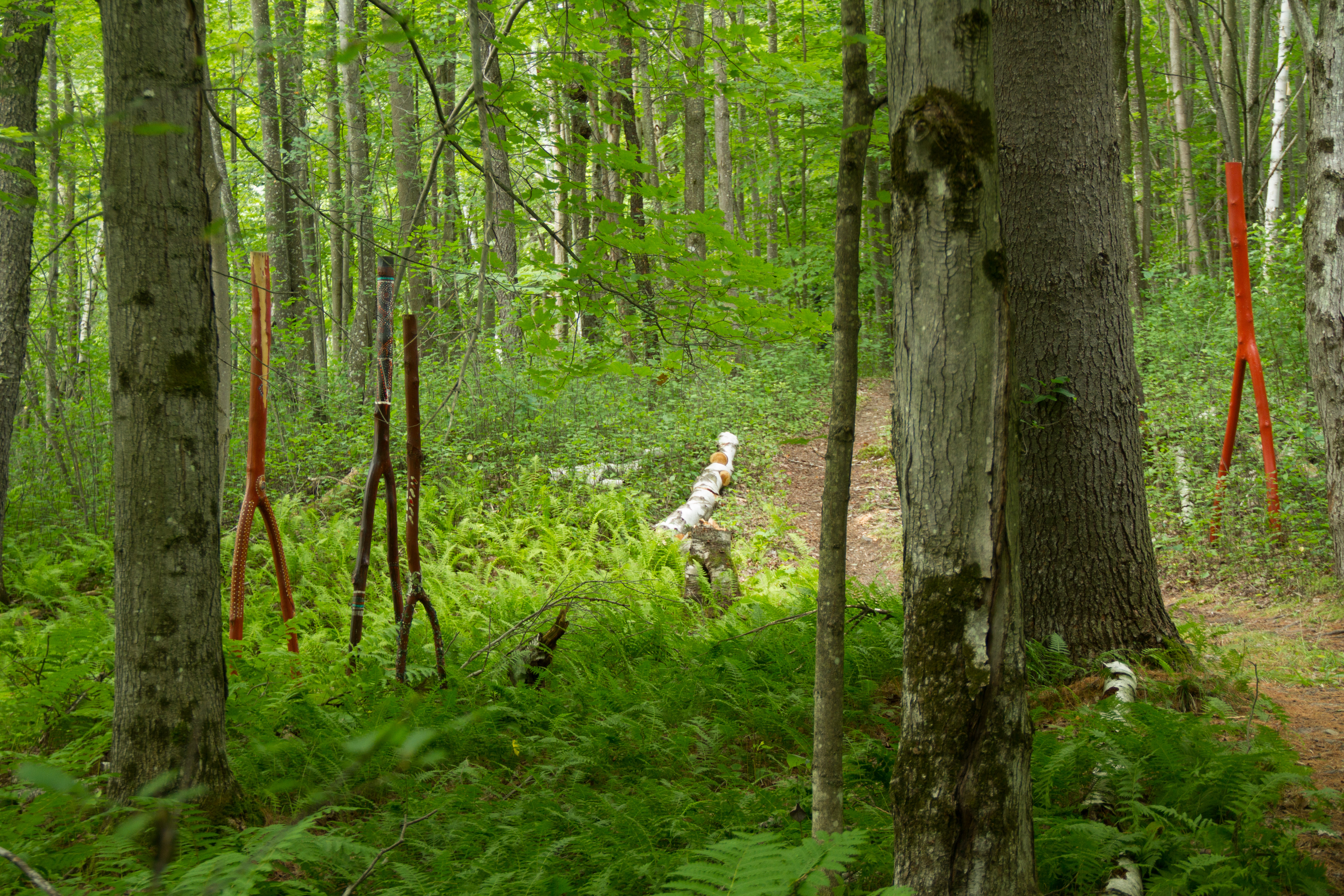 … and the group of Walkers who turn their backs on the palisade in The Clearing of the Land. 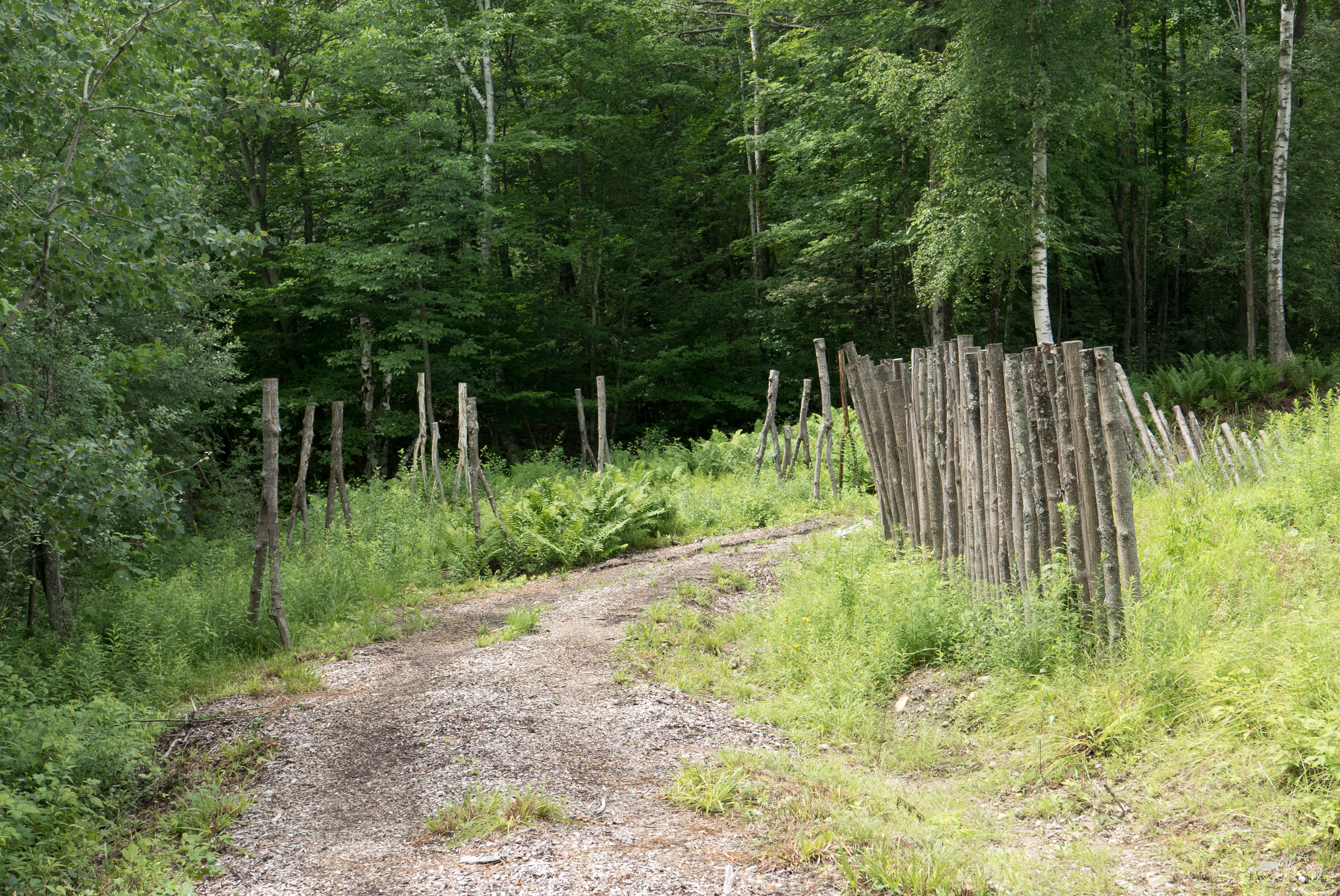 As the path turns the corner, the palisade begins to collapse.

Best, though, was when Paul and Sylvia saw this rock, a natural occurrence whose striking shape was for years partially hidden underground. Immediately they recognized it for what it was… a turtle moving slowly across the land. 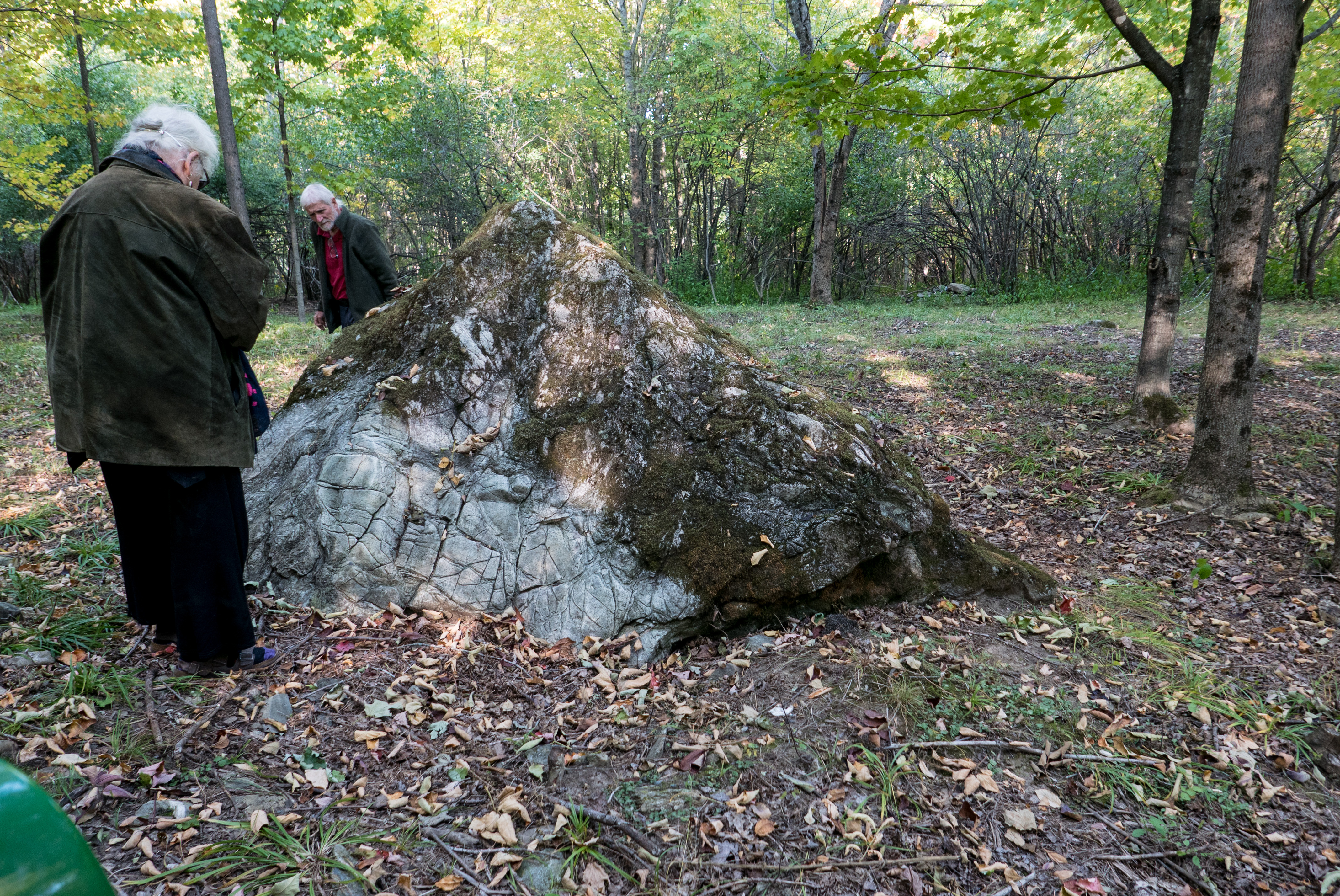 Because of the angle of the photo, the turtle is not completely evident. But if you look hard, you can spot the turtle’s head at the right, just coming out of the shell. You can also spot the turtle’s right front foot emerging as the animal moves forward.

To find the rock where I found it was good fortune. To uncover it to discover the turtle was a gift given me by the land. To share that gift with a couple who immediately recognized its significance was a privilege.

Thank you all for coming!