The Medicine Wheel and the Four Directions 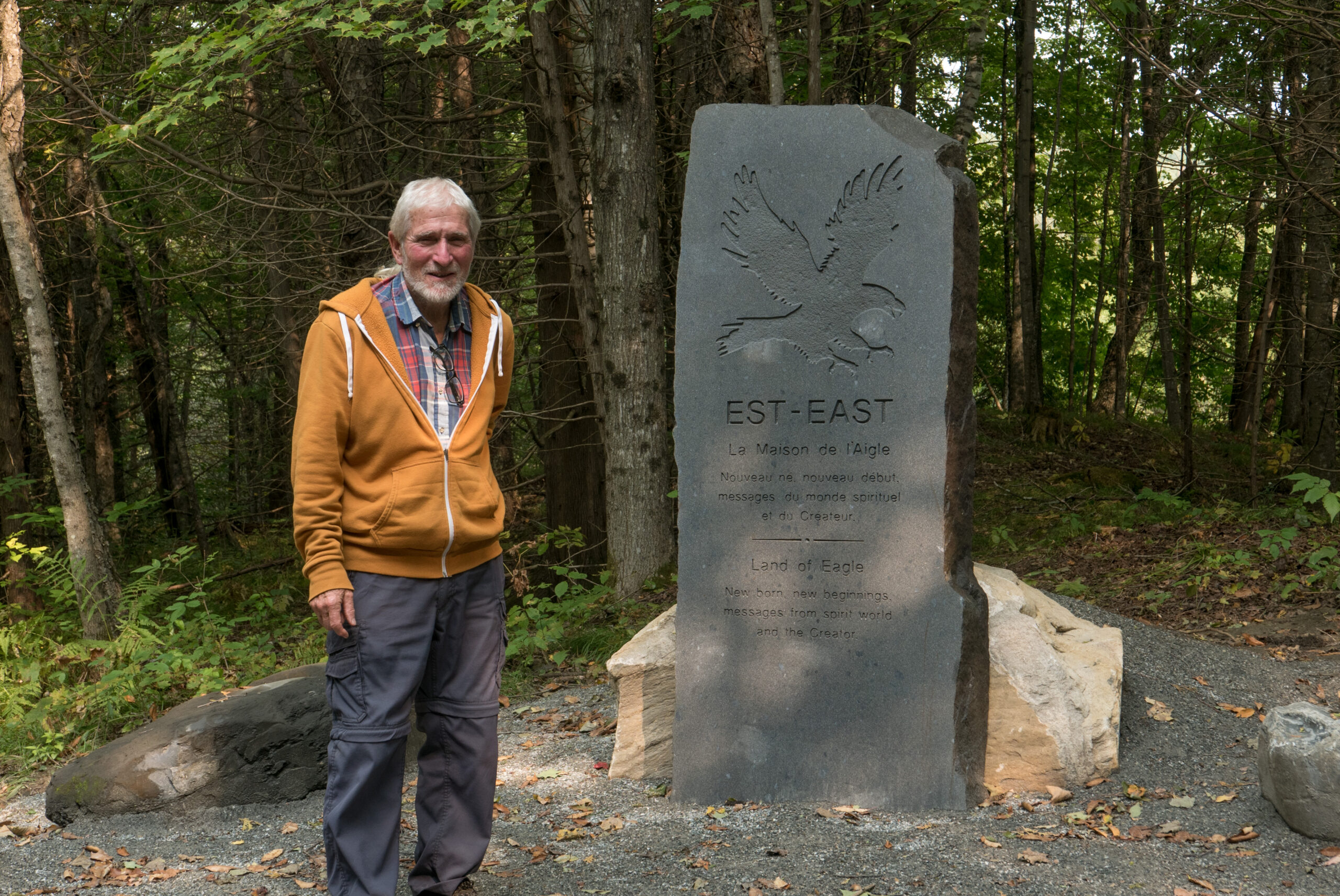 Earlier this week I was fortunate to visit a new installation on the Tomifobia Nature Trail in the company of its creator, Paul-Conrad Carignan, and Paul’s partner, Sylvia Bertolini. Paul is a Metis Algonquin-Anishnabe Elder and the site he designed is dedicated to spiritual and healing teachings of the Indigenous Medicine Wheel and its four directions.

At a clearing beside the trail, located in Quebec’s Eastern Townships close to the border with the United States, large granite slabs, or stelae, rise up at the four directions. Each stone is engraved with an animal spirit and the teaching associated with that  direction.

The stone at the East depicts an eagle. 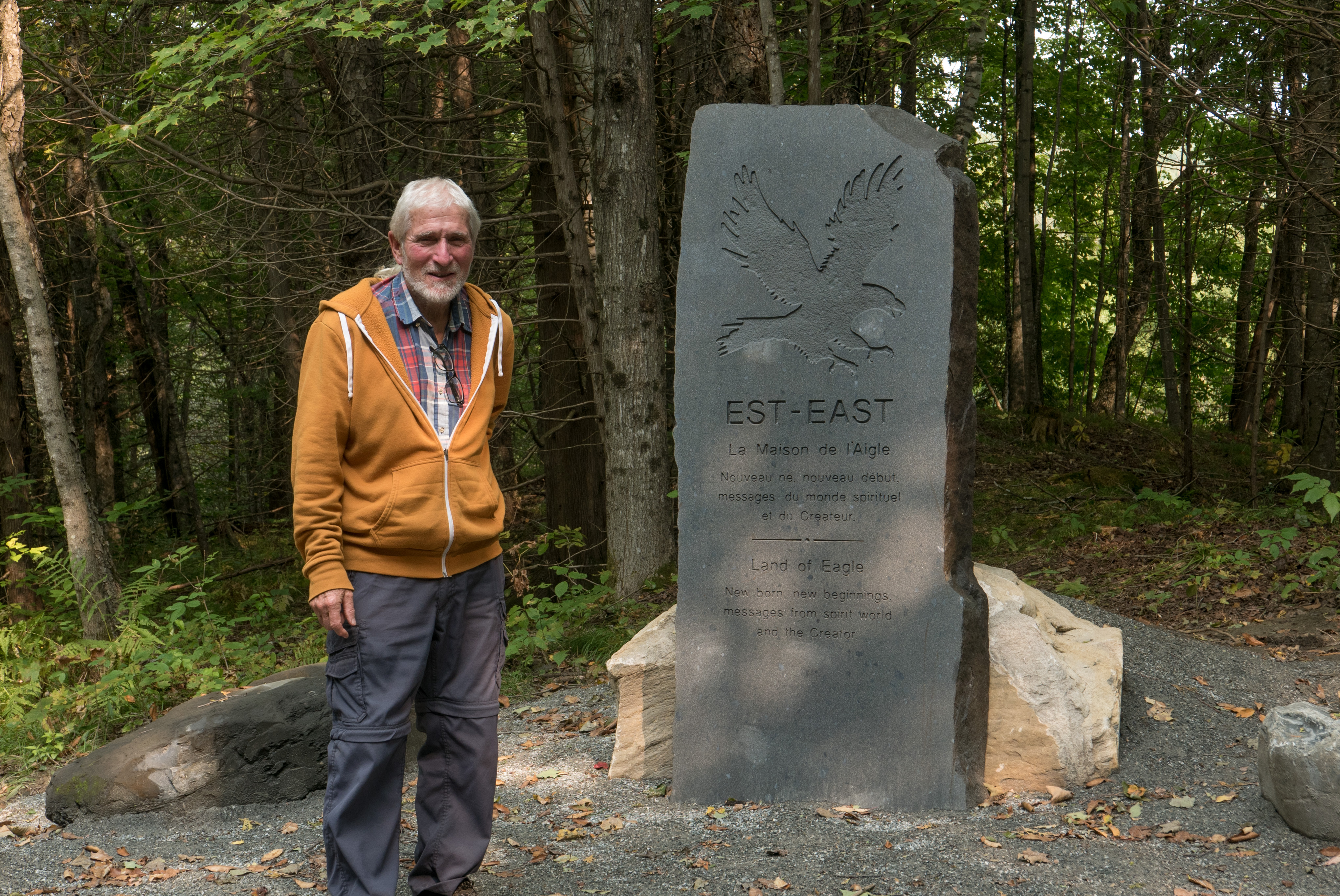 Paul-Conrad Carignan stands beside the eagle, the animal spirit that marks the East, the direction of new beginnings.

At the  South, the stone depicts a coyote. 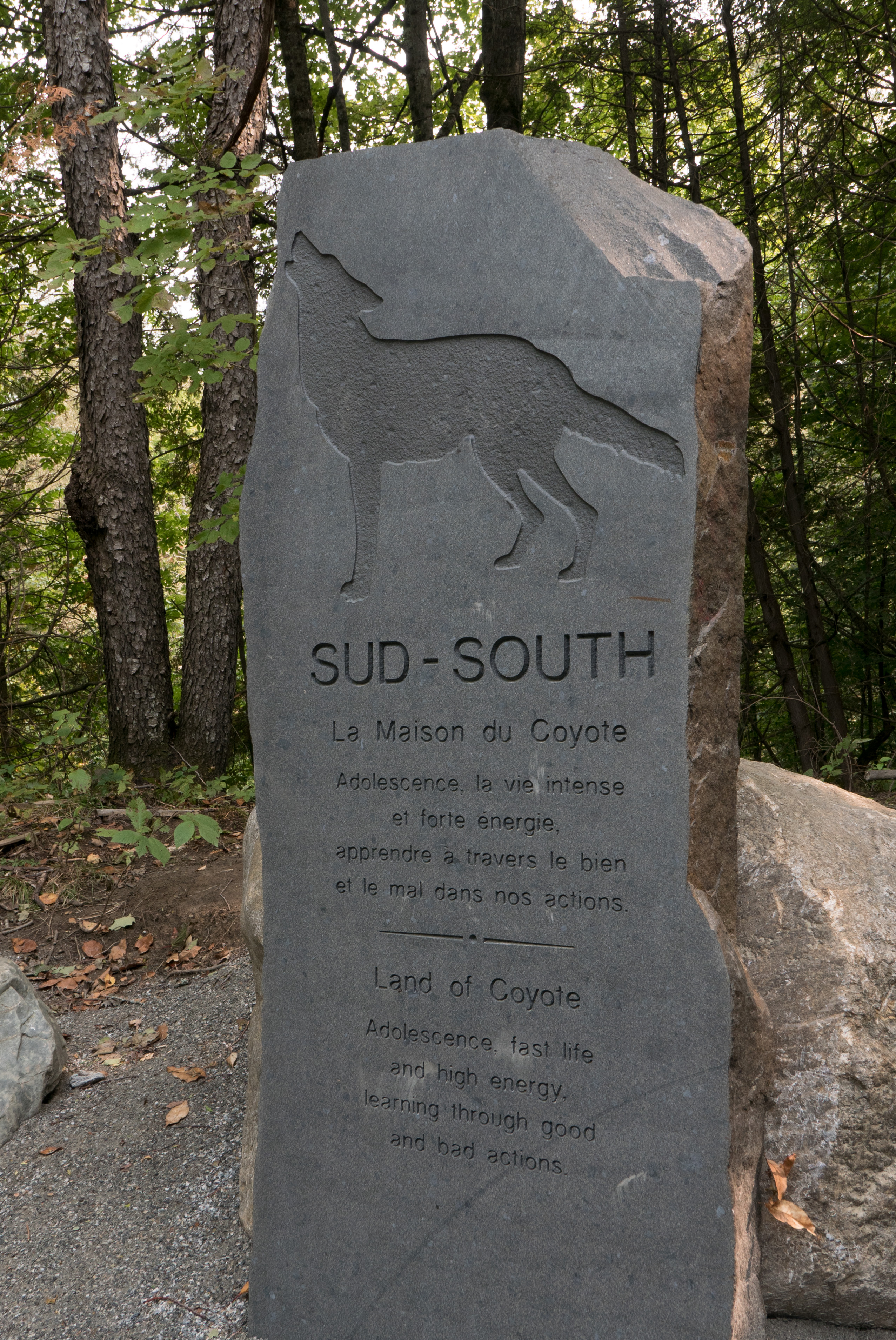 The teaching for the south, the land of Coyote, is linked to adolescence and high energy.

That at the West shows a bear, 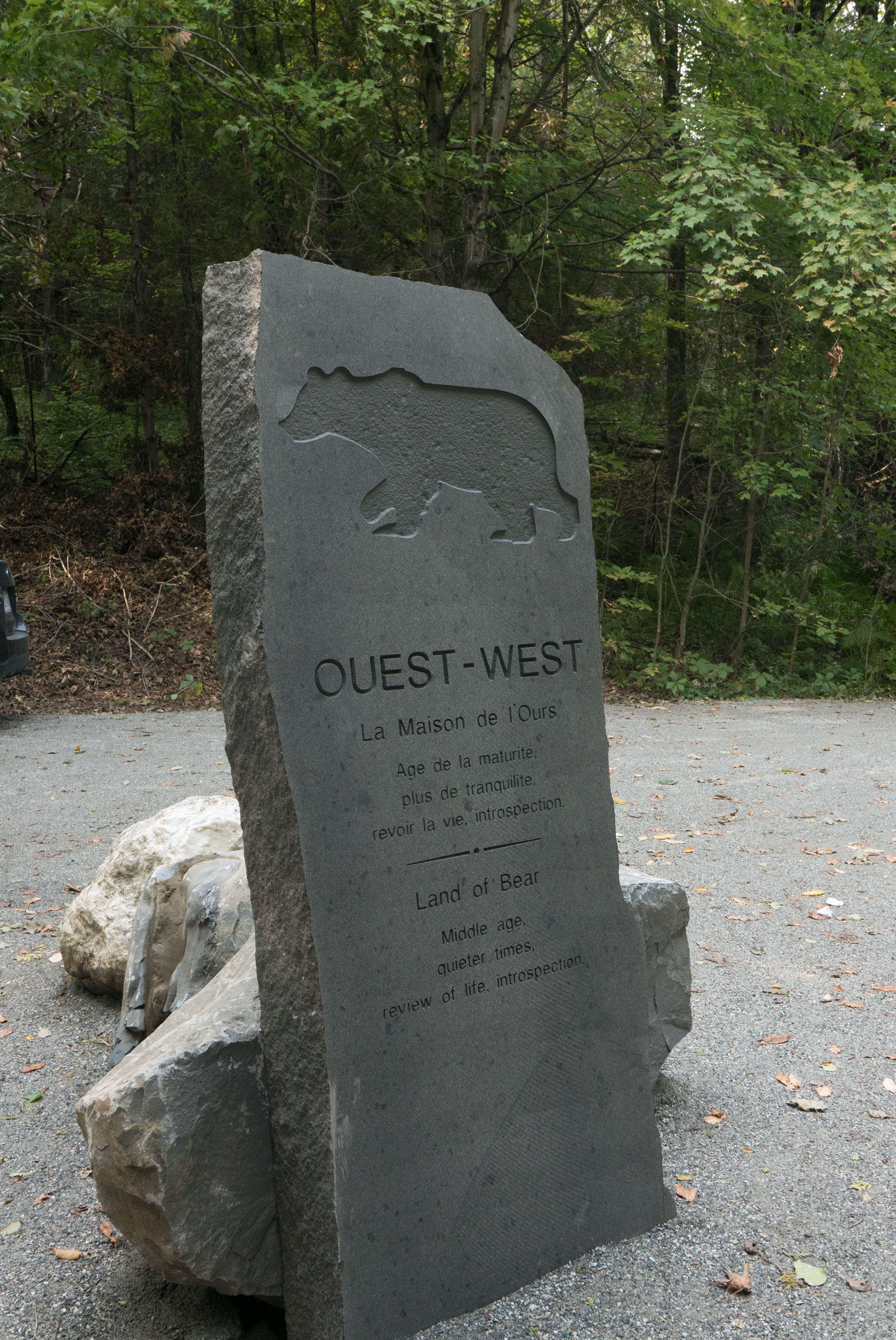 The bear is associated with middle age, quieter times and introspection.

… while that at the North shows a moose. 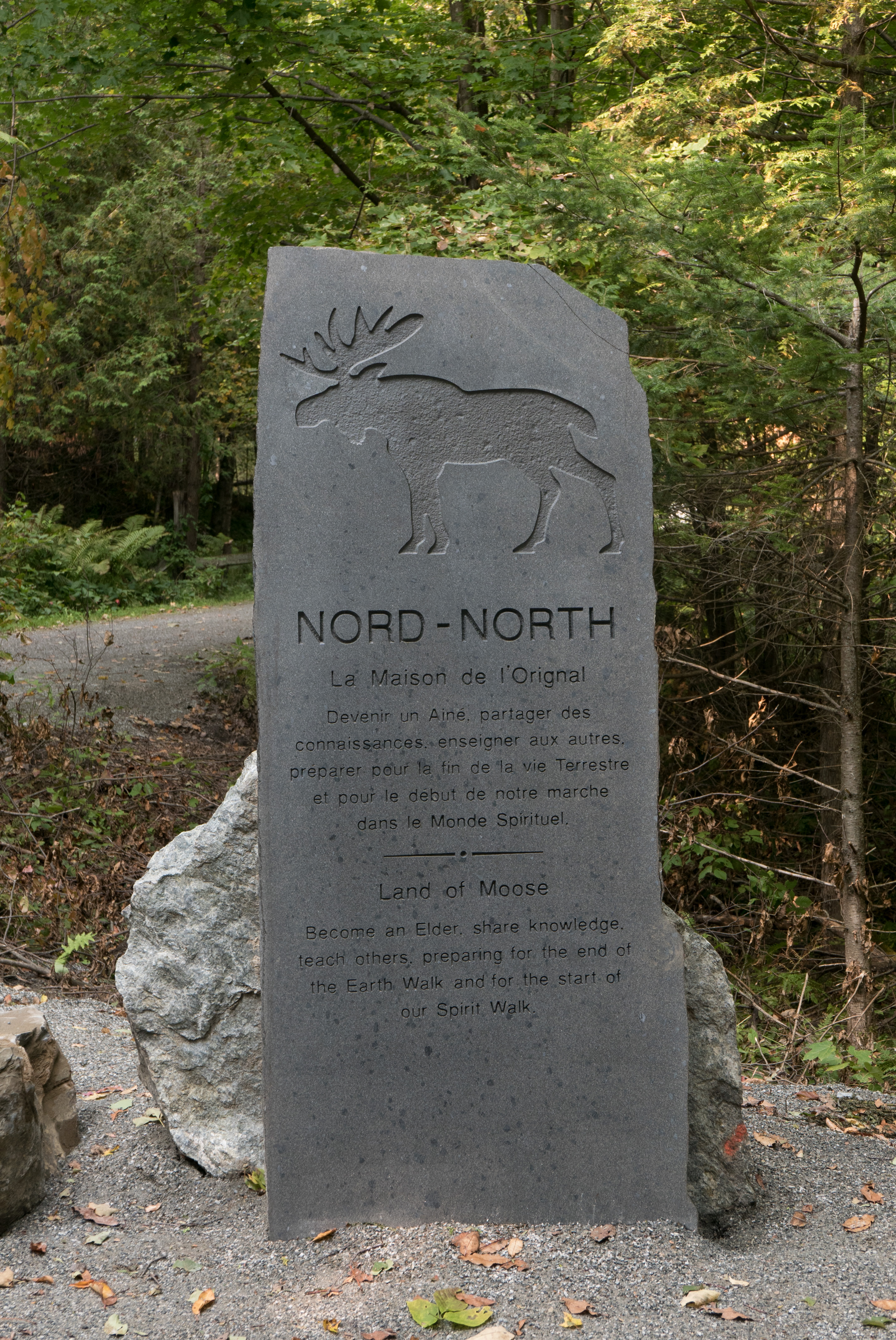 The moose teaches about sharing knowledge and preparing for the end of the Earth Walk and the beginning of the Spirit Walk.

Together, the texts describe the Indigenous beliefs of unity and healing that make the experience of being inside the circle so powerfully positive. 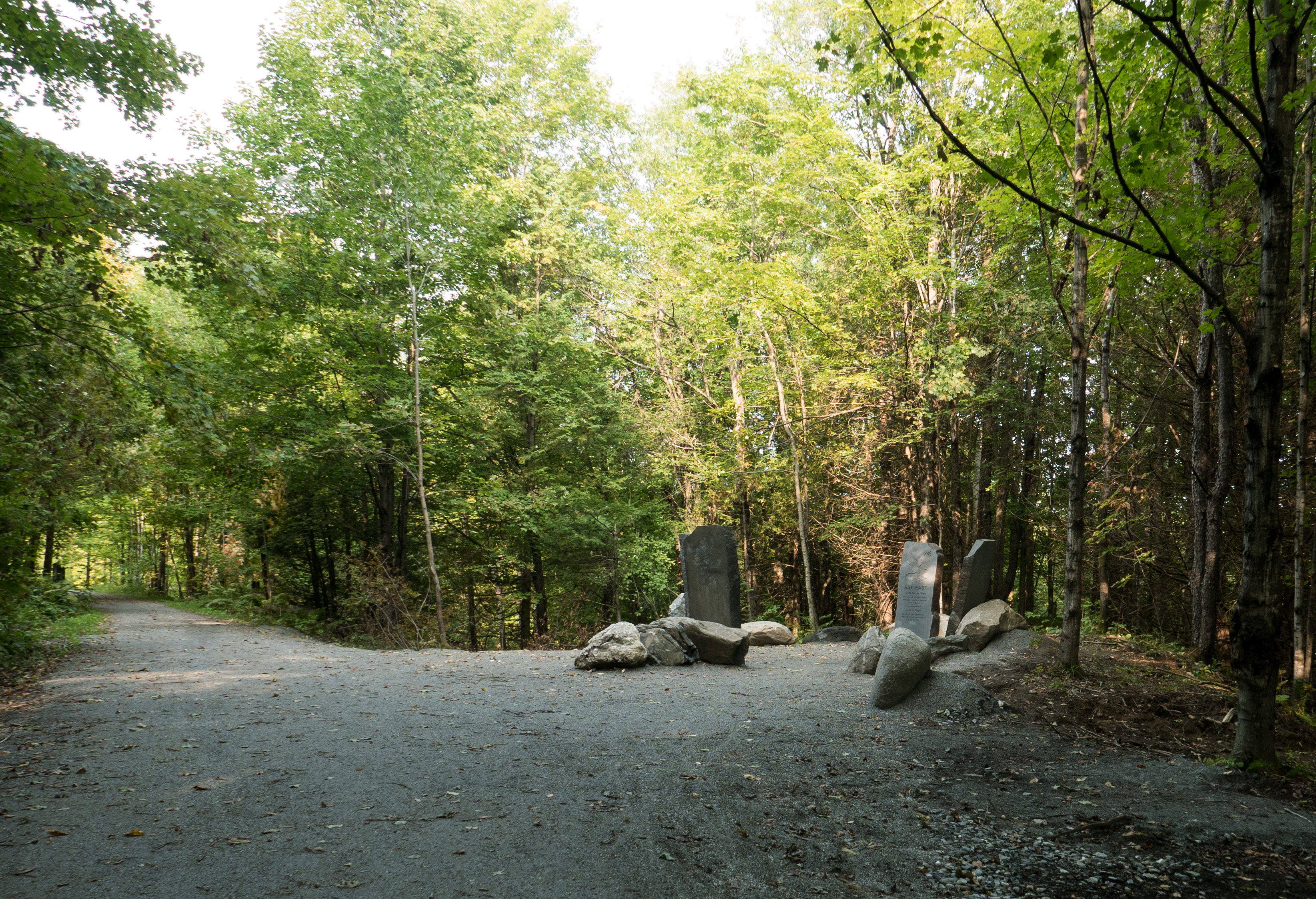 The circle is outlined with a variety of stones, each of which is interesting geologically, beautiful to look at and comfortable to sit on. The stones form the shape of a turtle, the ancient symbol for North America-Turtle Island; two distinctive stones suggest the turtle’s neck and head. 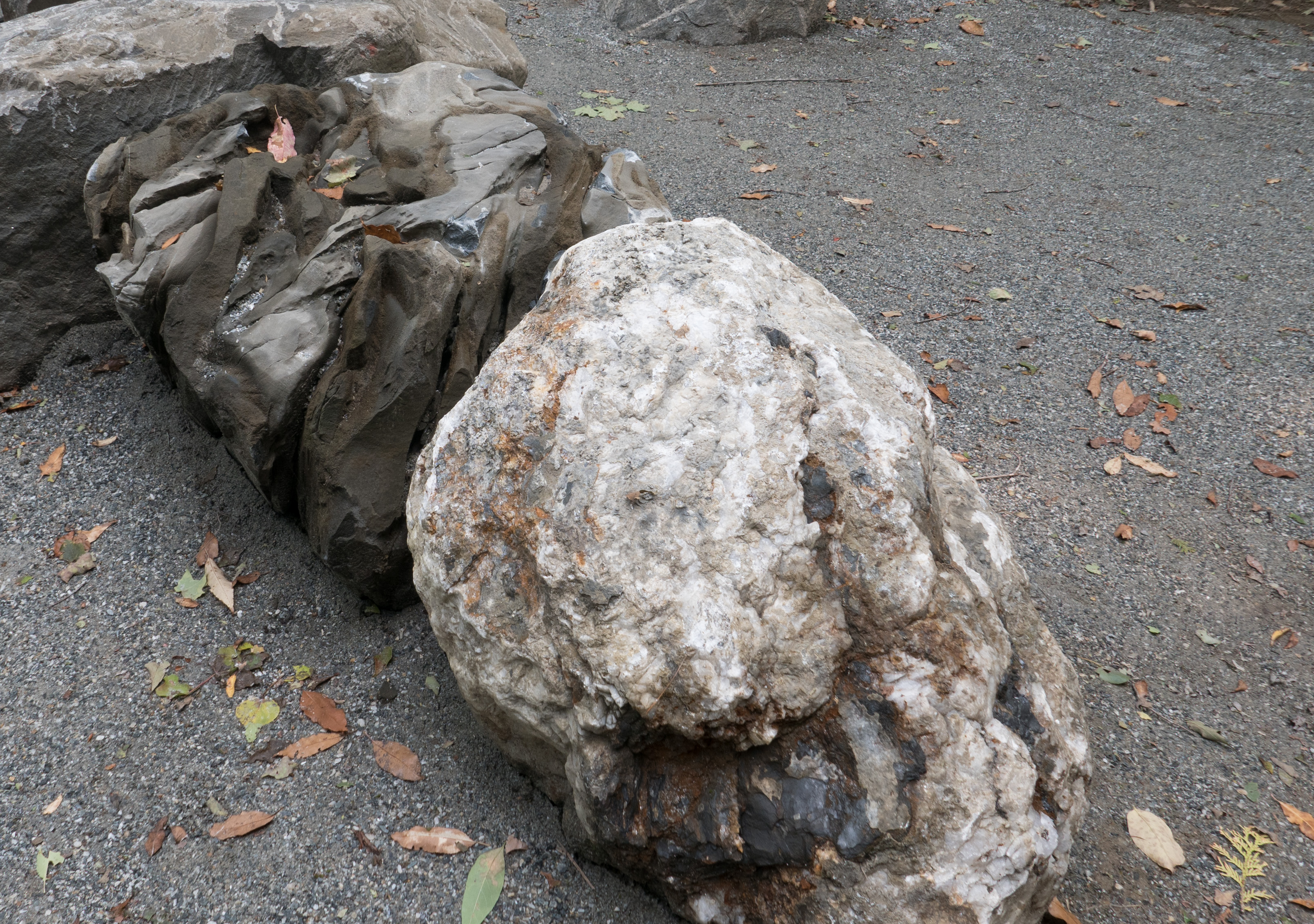 The dark stone is wrinkled as a turtle’s neck is. The white stone is the turtle’s head.

During construction, Mr. Carignan performed various ceremonies, scattering sacred tobacco leaves at the base of the four Directional Stones and conducting a special Chanupa-Sacred Pipe inauguration ceremony when the last stone was installed.

Visiting the site with the designer and his partner was a special privilege. Paul explained the significance of the stones and the engravings and shared his personal stories about the inception of the project, its construction and installation. I sat on a stone as he and Sylvia drummed the turtle song, but I wasn’t simply a spectator. Instead I became a silent participant, feeling the drum beats as the turtle lumbered his way across the circle and into the woods. 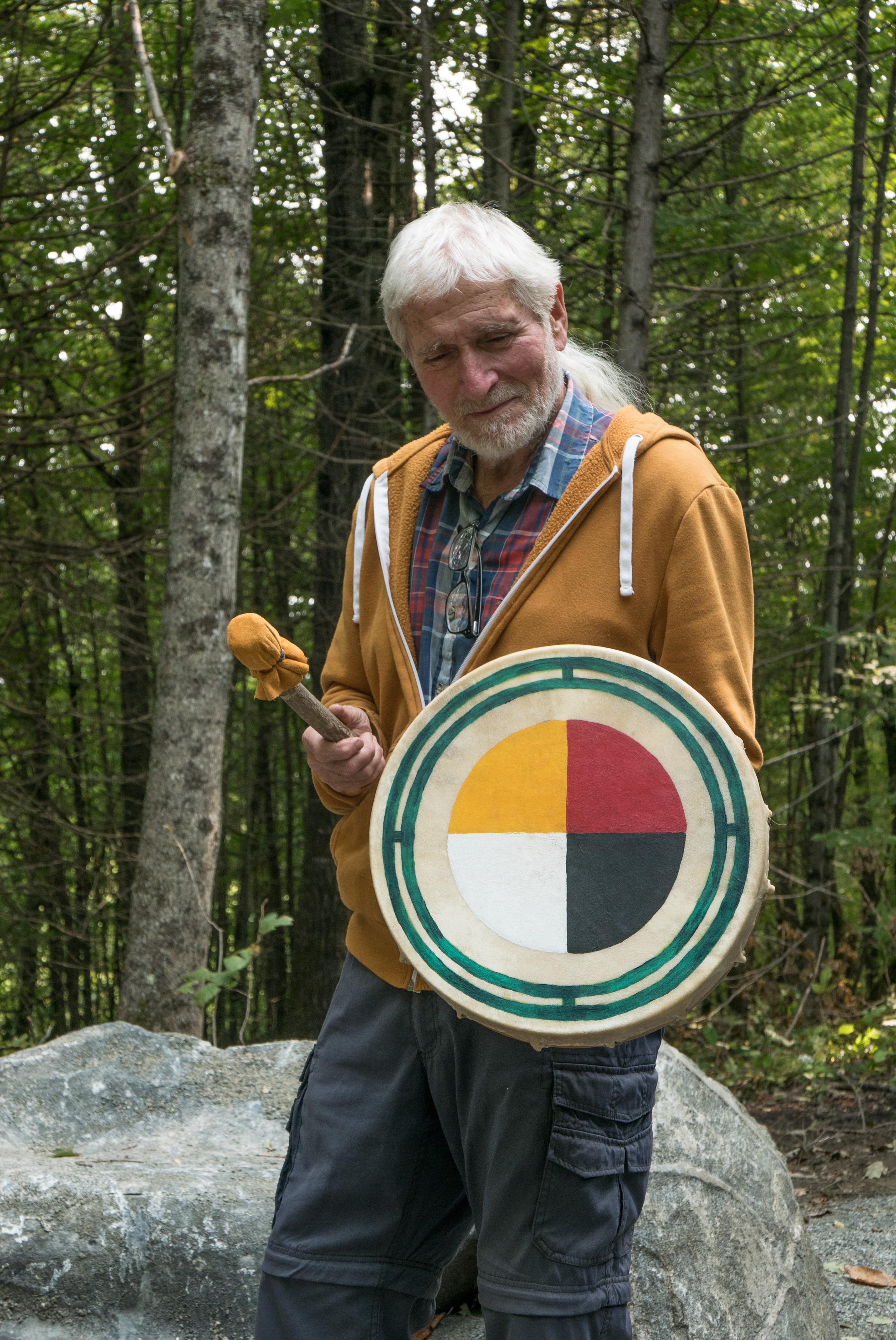 Paul stretched the deer skin for his drum and holds workshops to teach others how to do the same.

The colours on Paul’s drum represent the four directions: white for East, yellow for South, red for West and black, or dark blue, for North. The green earth encloses them all.

The day we visited was bright and cool and cyclists and runners passed by regularly, using the trail as its owners, Sentiers Massawippi Inc., intended. One couple stopped to rest, another who had attended the opening ceremony stopped to offer congratulations and to praise the trail itself. 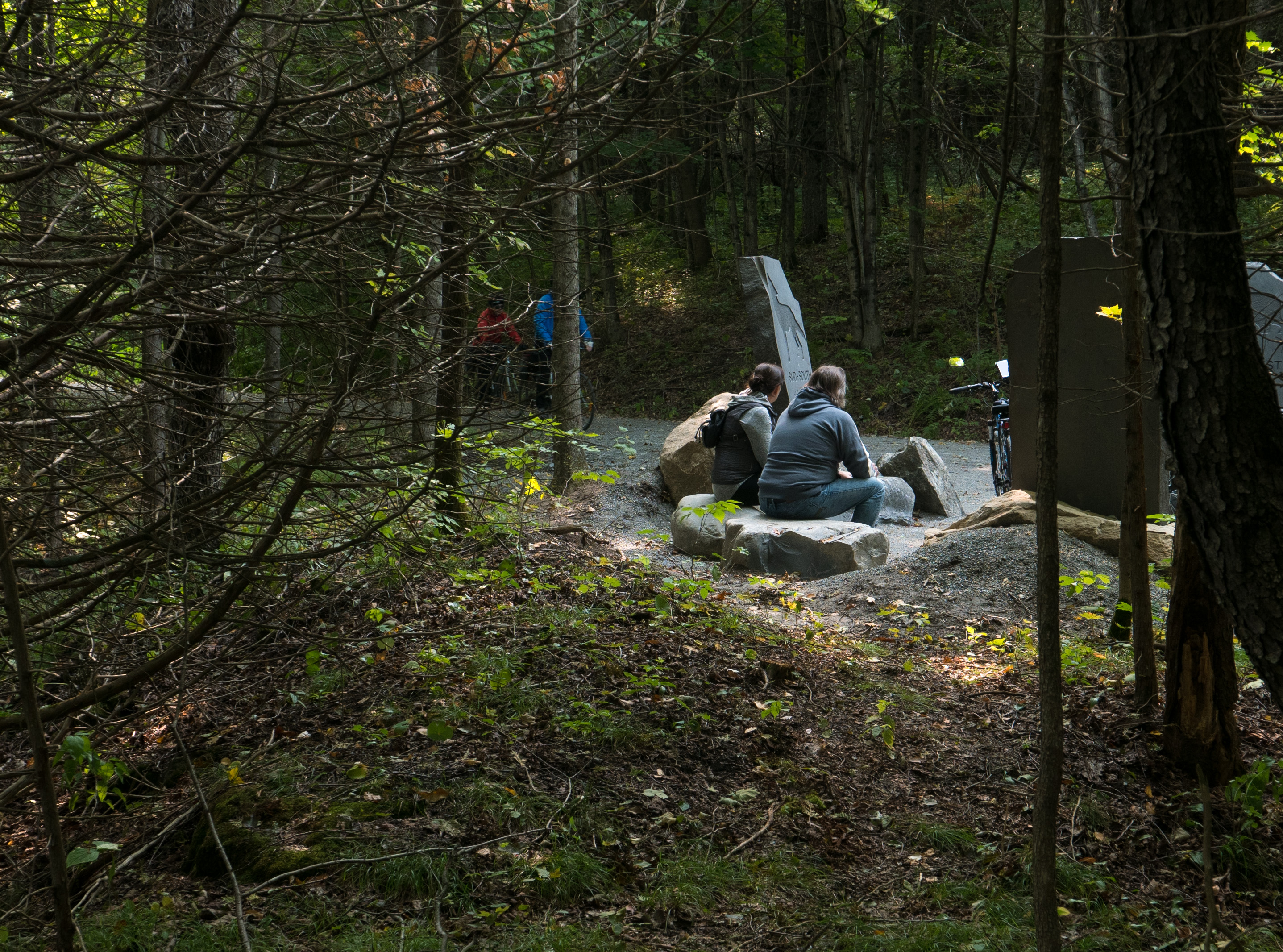 Two cyclists take a break, sitting on two of the stones that form the outline of a turtle.

It is, indeed, a beautiful setting, on the edge of a forested precipice overlooking the river far below. The sense of peace and well-being I felt inside the circle tells me that the stones and their message is getting through as intended.

The new rest area opened on August 14. It is located 16.8 km. south of where the trail leaves Ayer’s Cliff, in Quebec’s Eastern Townships. A second dedication ceremony will be held on September 30, when Mr. Carignan will be on site to explain the significance of the installation and share Drum songs.

If you are able to attend, I encourage you to do so. I hope you will experience, as I did, a moment of serenity in these troubled times.

It looks like an amazing installation and a special place.

It is a special place… hope you can visit it the next time you are in Quebec.

Love the symbols you have for each of the directions. Some day when travel is allowed Judy and I will have to come see all the new things you’ve done with Glen Villa.

I’d love to see you both again. Hope all is well and continues to be.