The Middle of August 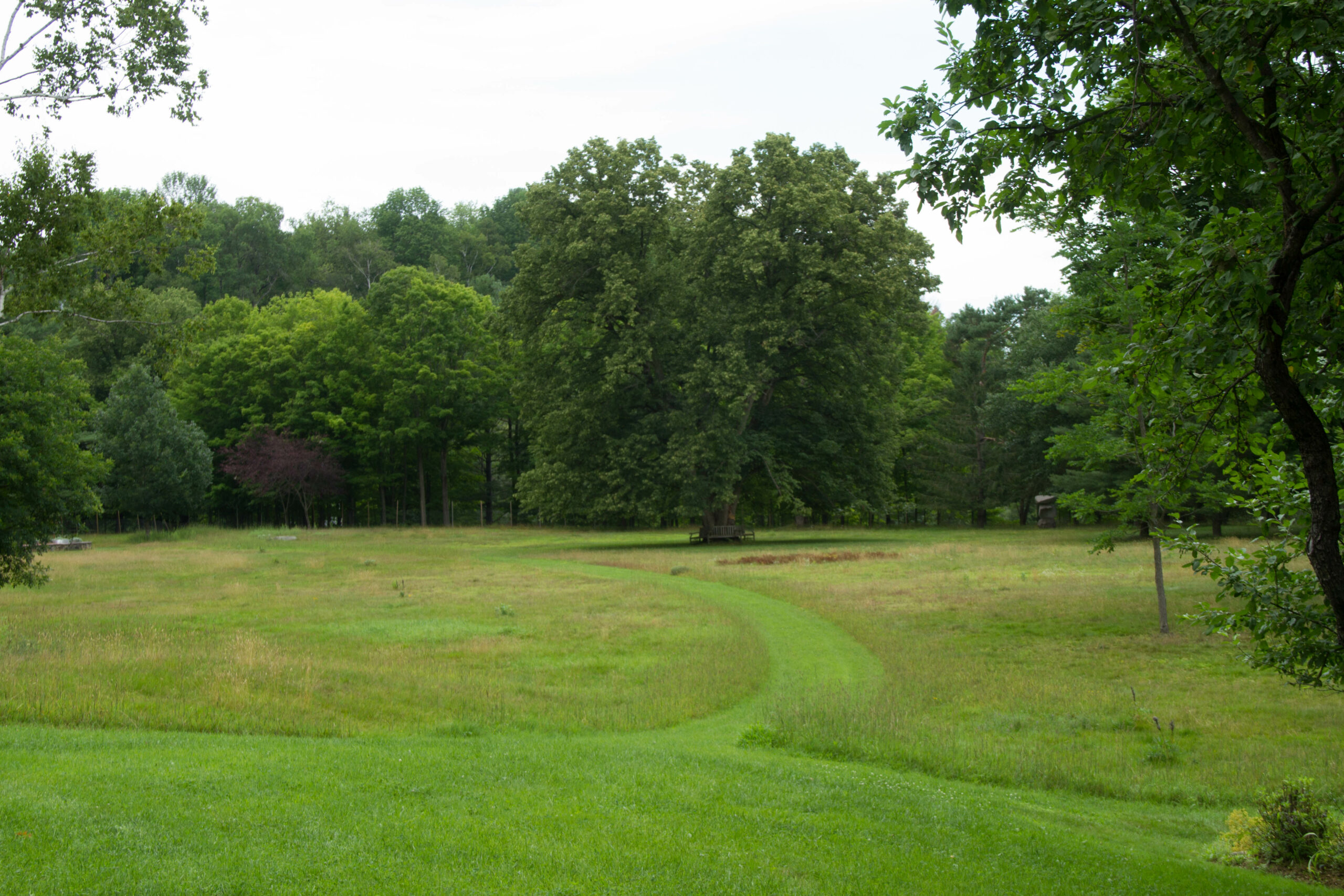 In the middle of August the garden at Glen Villa is just beginning to emerge from an unusually long dry spell. A few days ago we had rain — buckets of it that washed out our driveway and threw a section of bank into Lake Massawippi. (We repaired the driveway; the lake itself may take care of the landslide.)

Before the rain, plants were wilting badly. The leaves on a catalpa tree we planted years ago first drooped, then began to curl up and turn brown; thankfully they are now starting to recover. 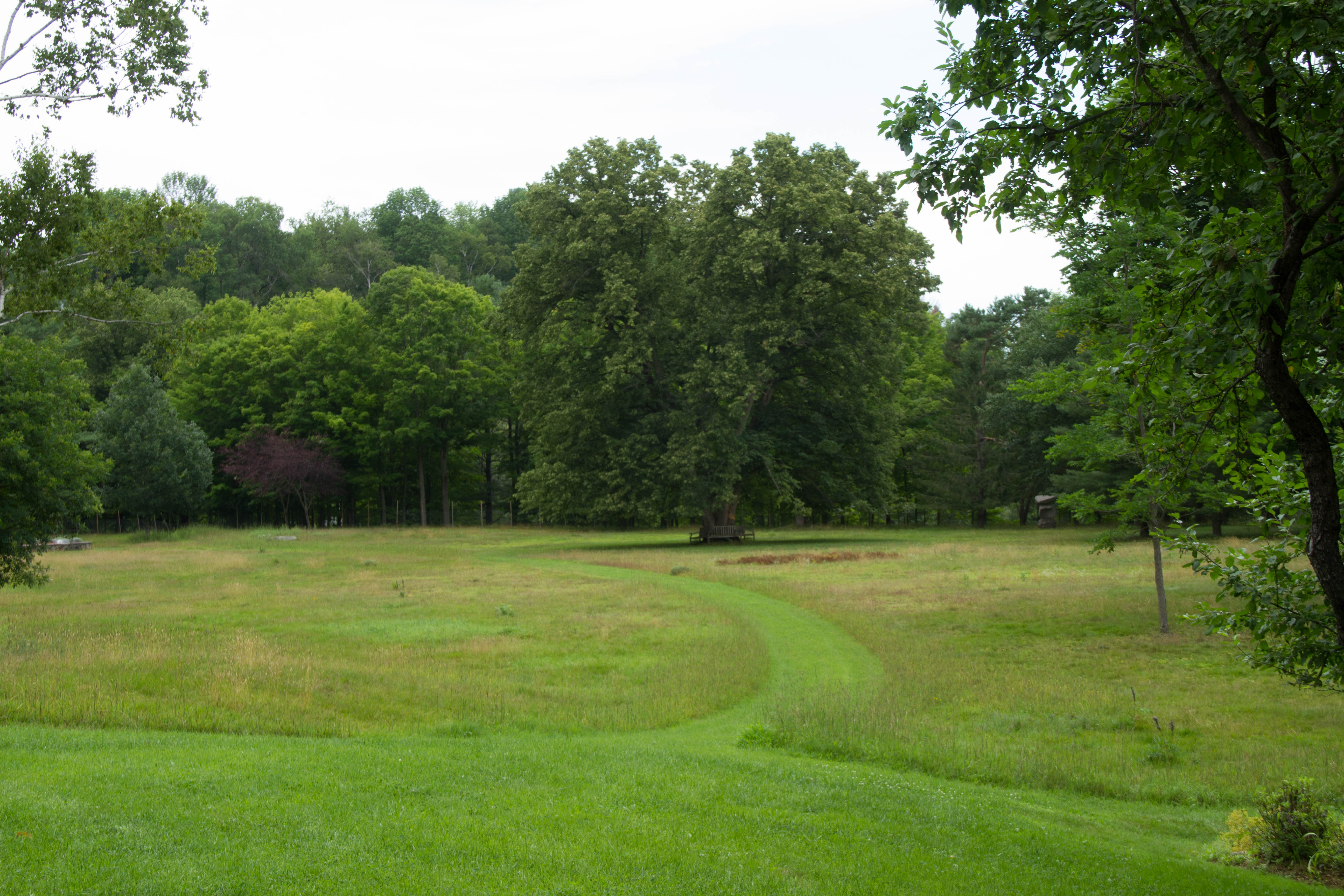 But up close, it simply looks weedy. The patch of dock that normally disappears in the thick grass stands out like a rash that refuses to heal. 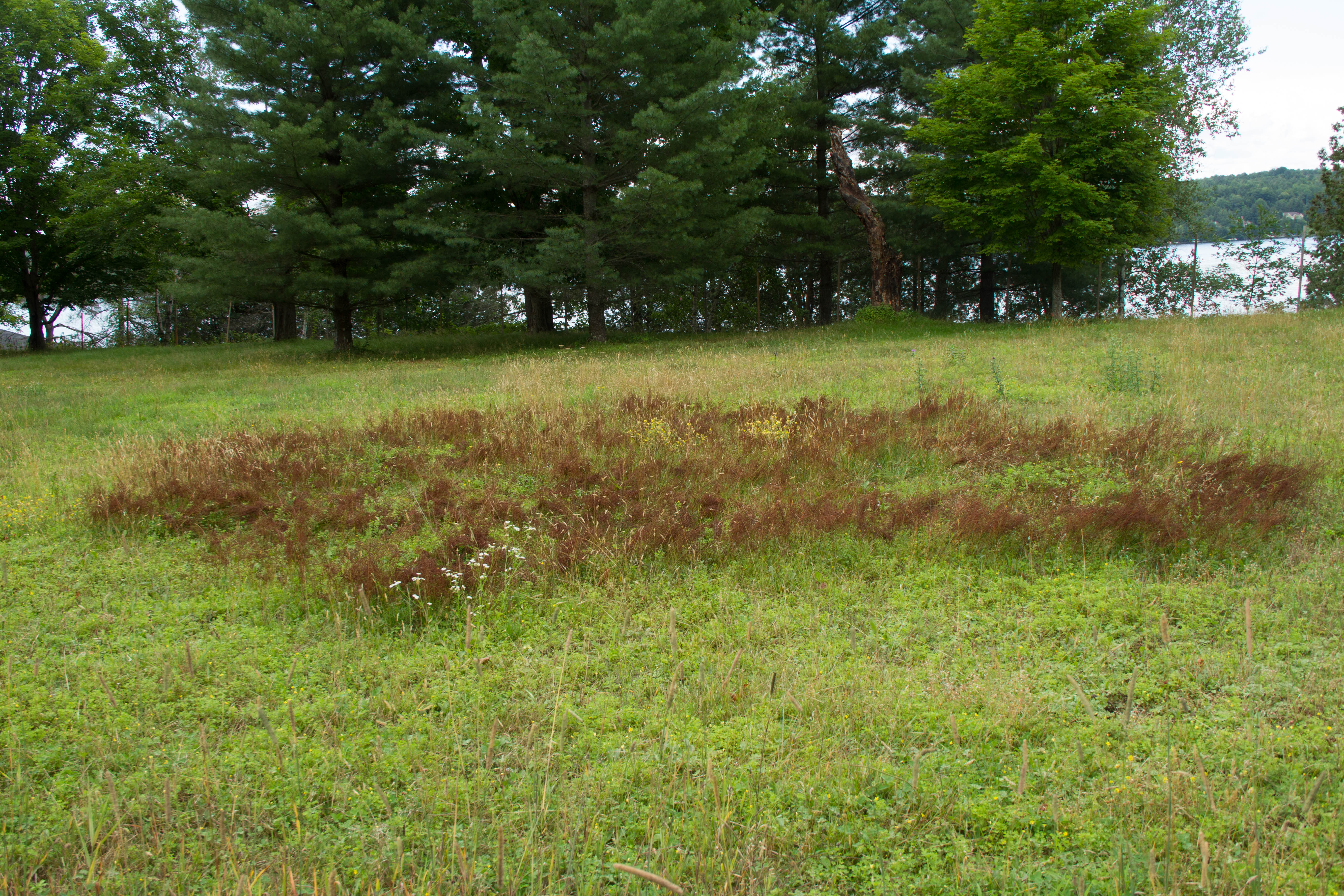 Red dock, or sheep sorrel (Rumex acetosella), is patchier than in previous years.

Not all is a loss. There is a dainty white wildflower, member of the aster family, that is adding a touch of interest. 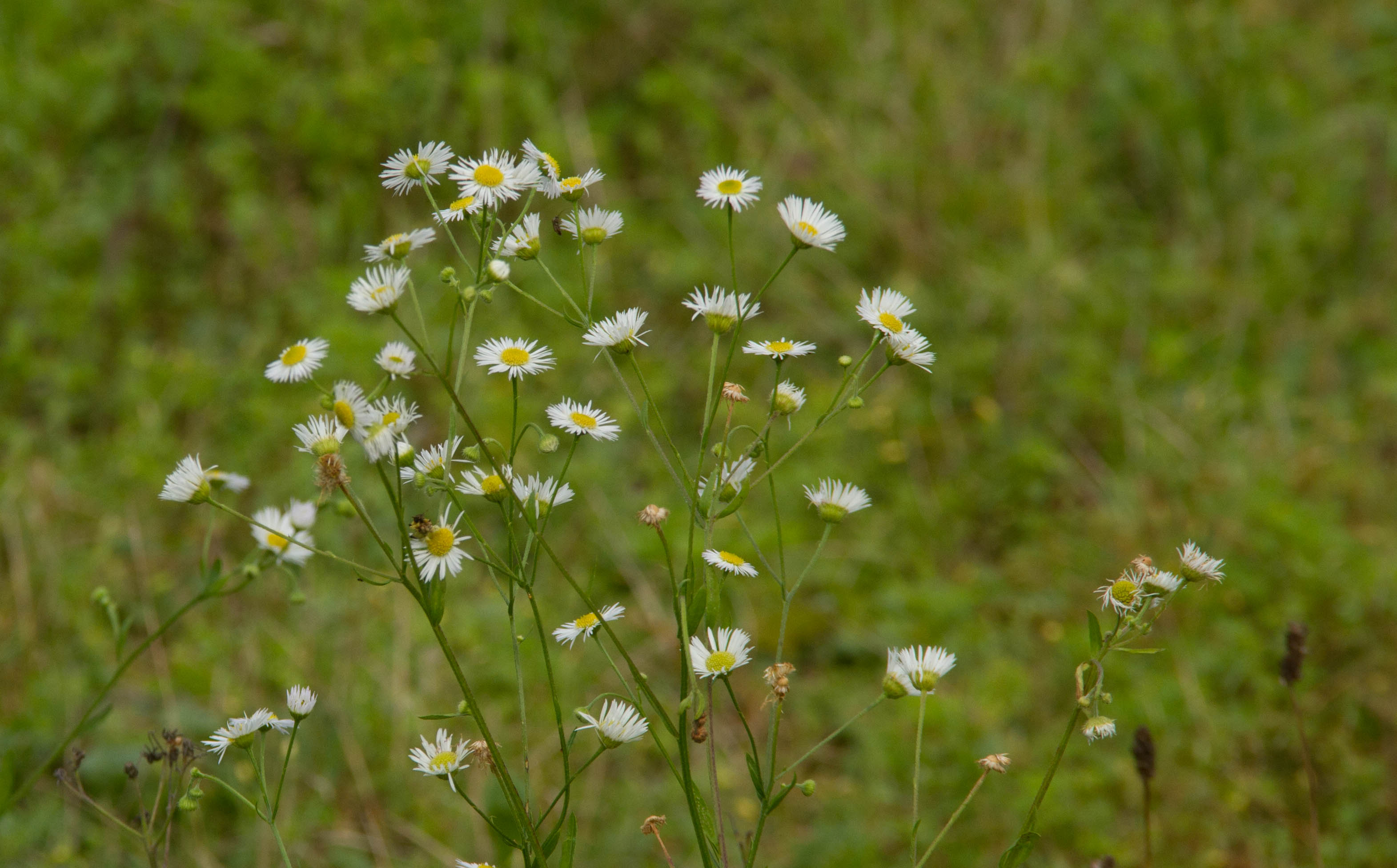 This wildflower is one of many composites or daisies in the aster family. There is more of it this plant this year than last. Calling it dainty is a nice way of saying that it doesn’t make a big impression. I’m hoping,, though, that with more and more of it, eventually it will.

The Cascade is lush and green. 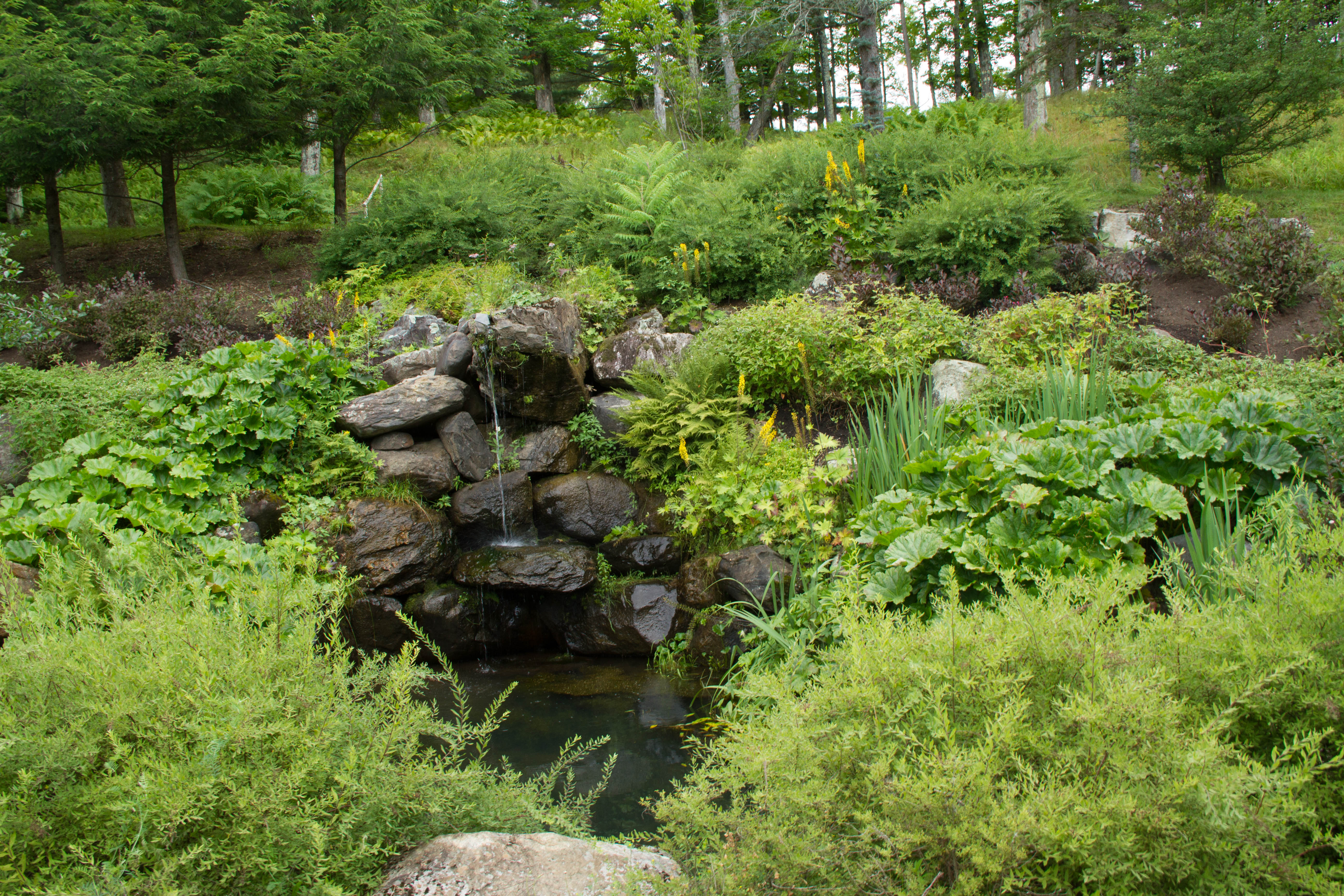 The Ligularia has almost finished blooming but still provides a touch of yellow.

The Aqueduct looks good although the Nepeta ‘Walker’s Low’ that made such a show for a month or more has been shaved back to allow for a possible second bloom. 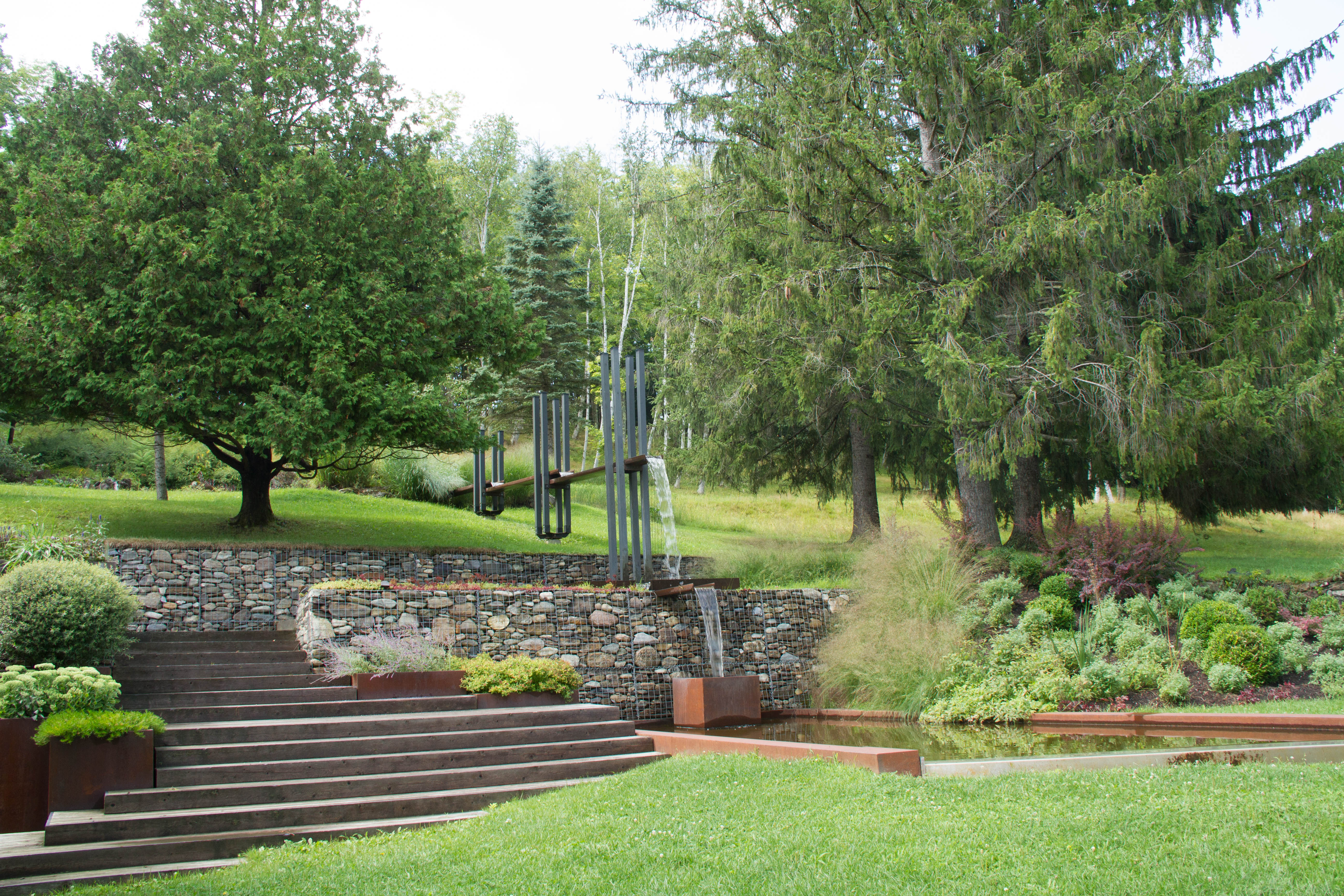 The Prairie Dropseed, Sporobolus heterolepis, is coming into its own. In another few weeks it will begin to change colour, ending as a golden-orange that blends well with the rusted steel edging the reflecting pool.

in the reflecting pool, the tadpoles that gave grandchildren such a treat in early July have grown up into frogs. 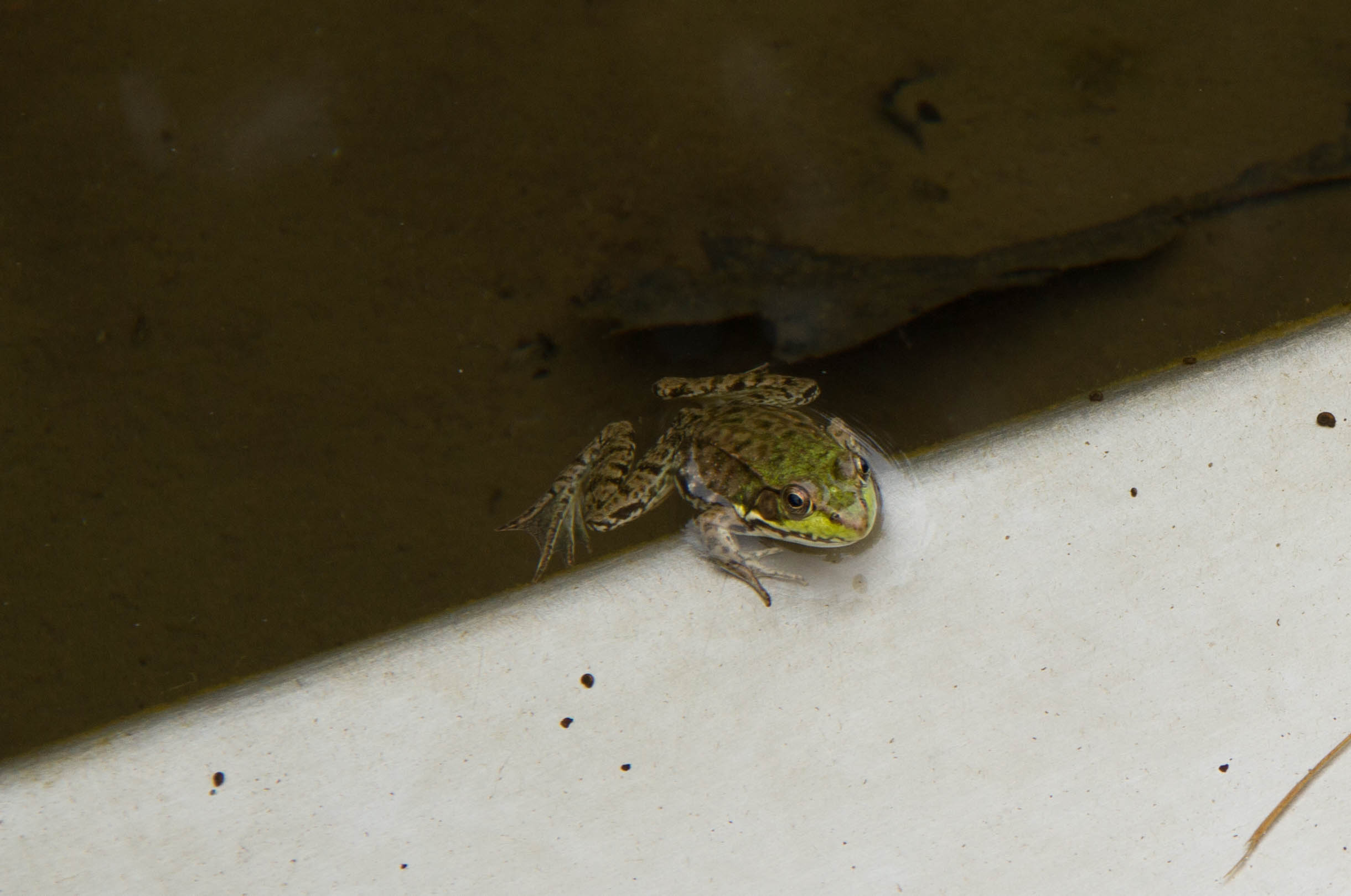 These little guys can make a lot of noise. I think their sounds are magnified by the steel surrounds.

I’m not a fan of the strong yellows and oranges that thrive in late summer so there isn’t a lot of colour in the garden at the moment.  Instead, green and white dominate.  By the kitchen door, white spears of clethra, or summersweet, pierce the green surroundings. Its fragrance is powerful in the sunshine, attesting to the honesty of its name. 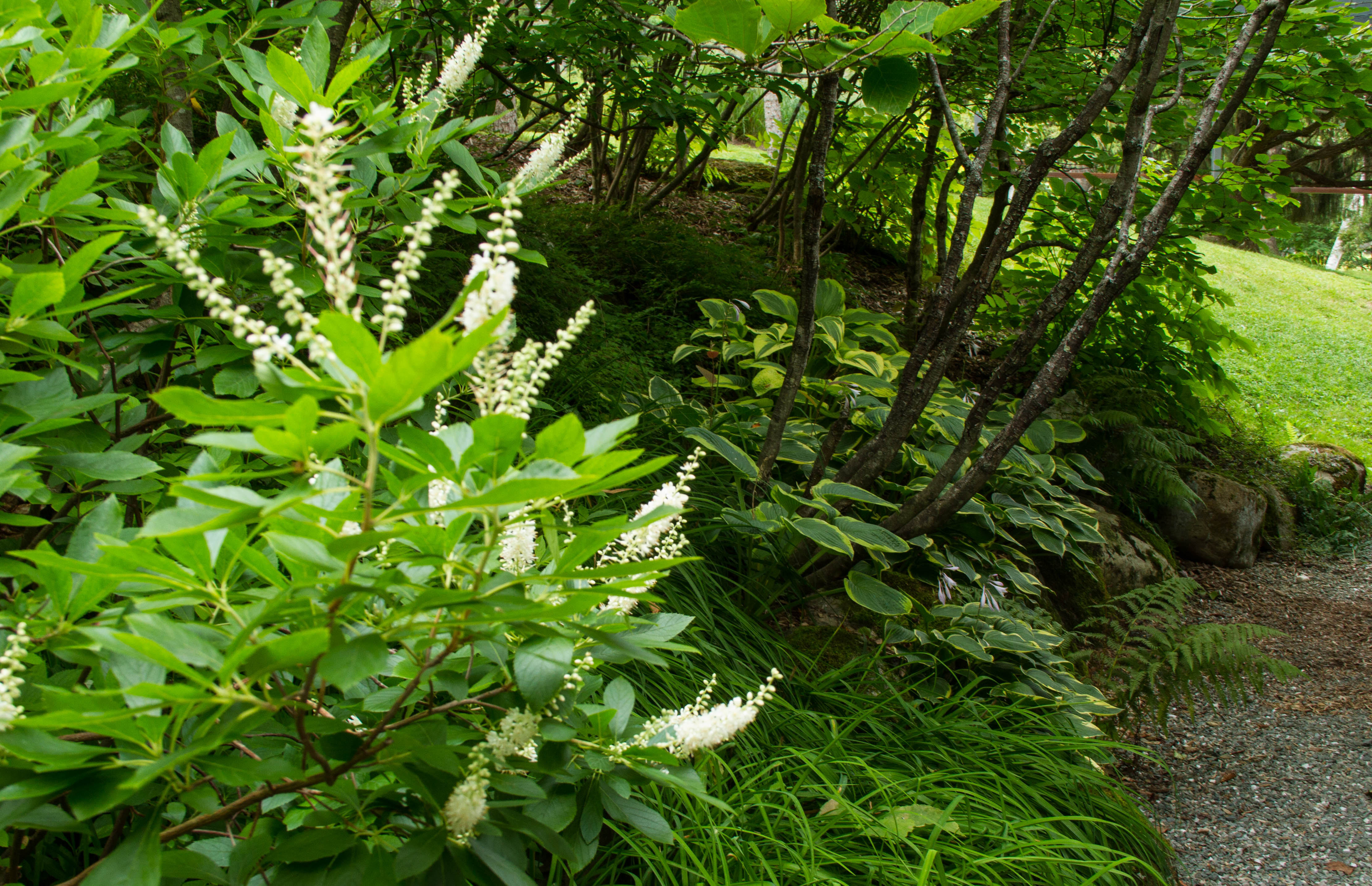 The yellow edge on the hosta in the background is the sort of yellow I like at this time of year — soft and creamy.

Near the front door and in the Lower Garden, lacecap hydrangeas add another touch of white. They are blooming well now, with weeks of bloom still to come. 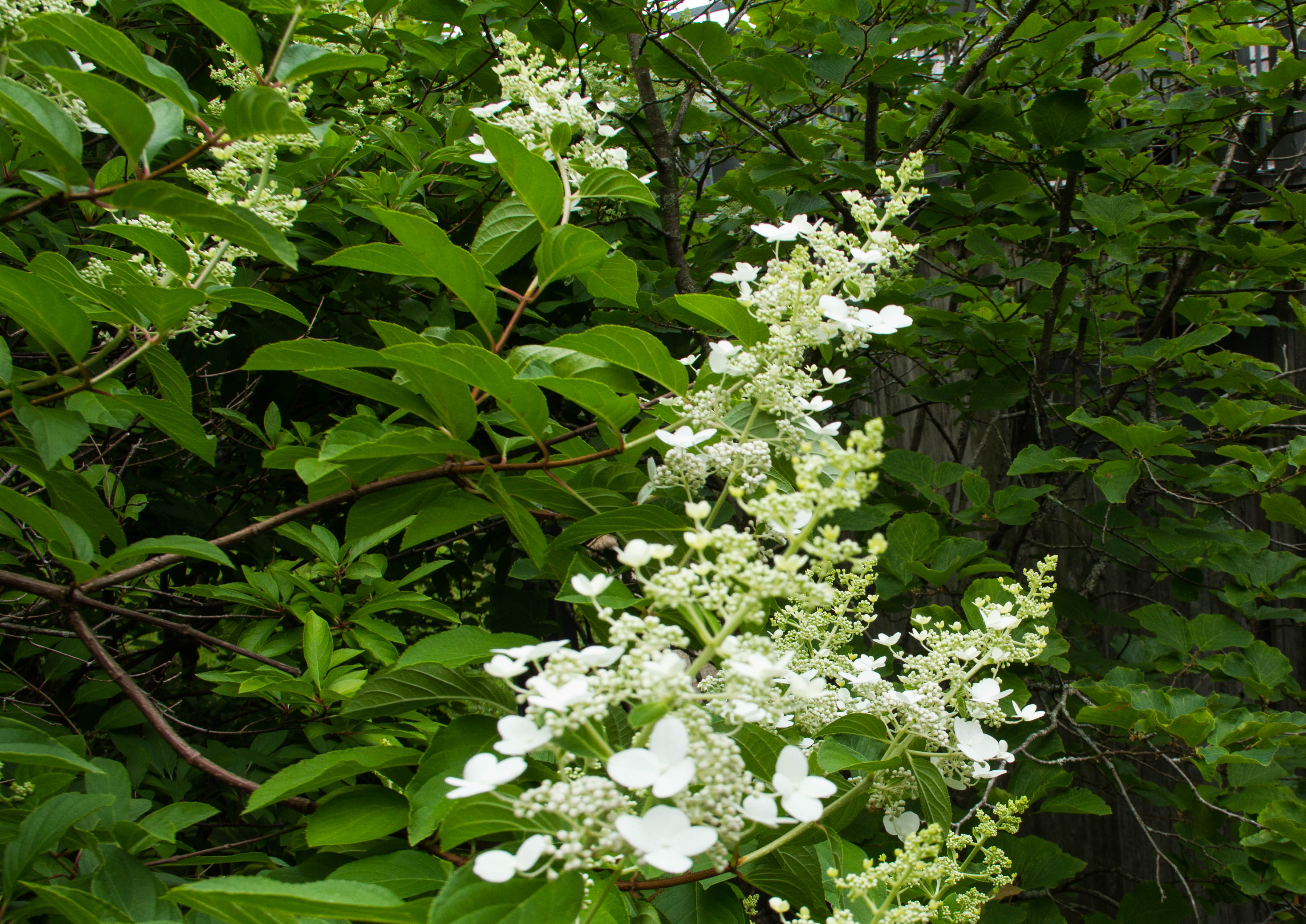 Near the Lower Garden, a PeeGee hydrangea is loaded with blooms. 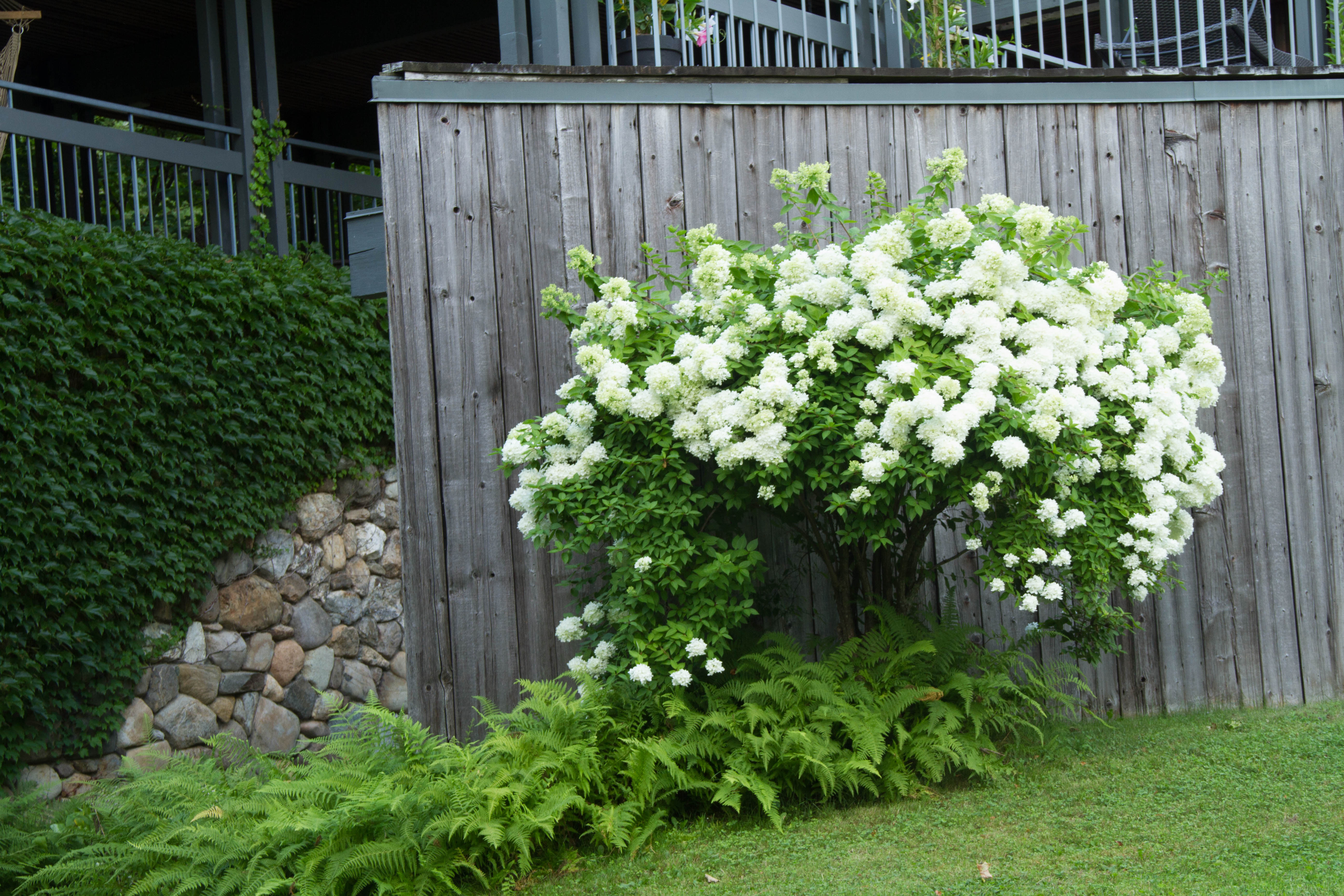 This peegee hydrangea (more properly called Hydrangea paniculata ‘Grandiflora’) is one of the most cold-hardy varieties. It was here when we moved into the house 22 years ago.

Yet as so often seems the case, my favourite flowers are the wild ones. Arrowhead is shooting everywhere in the shallow waters of the pond by the road. 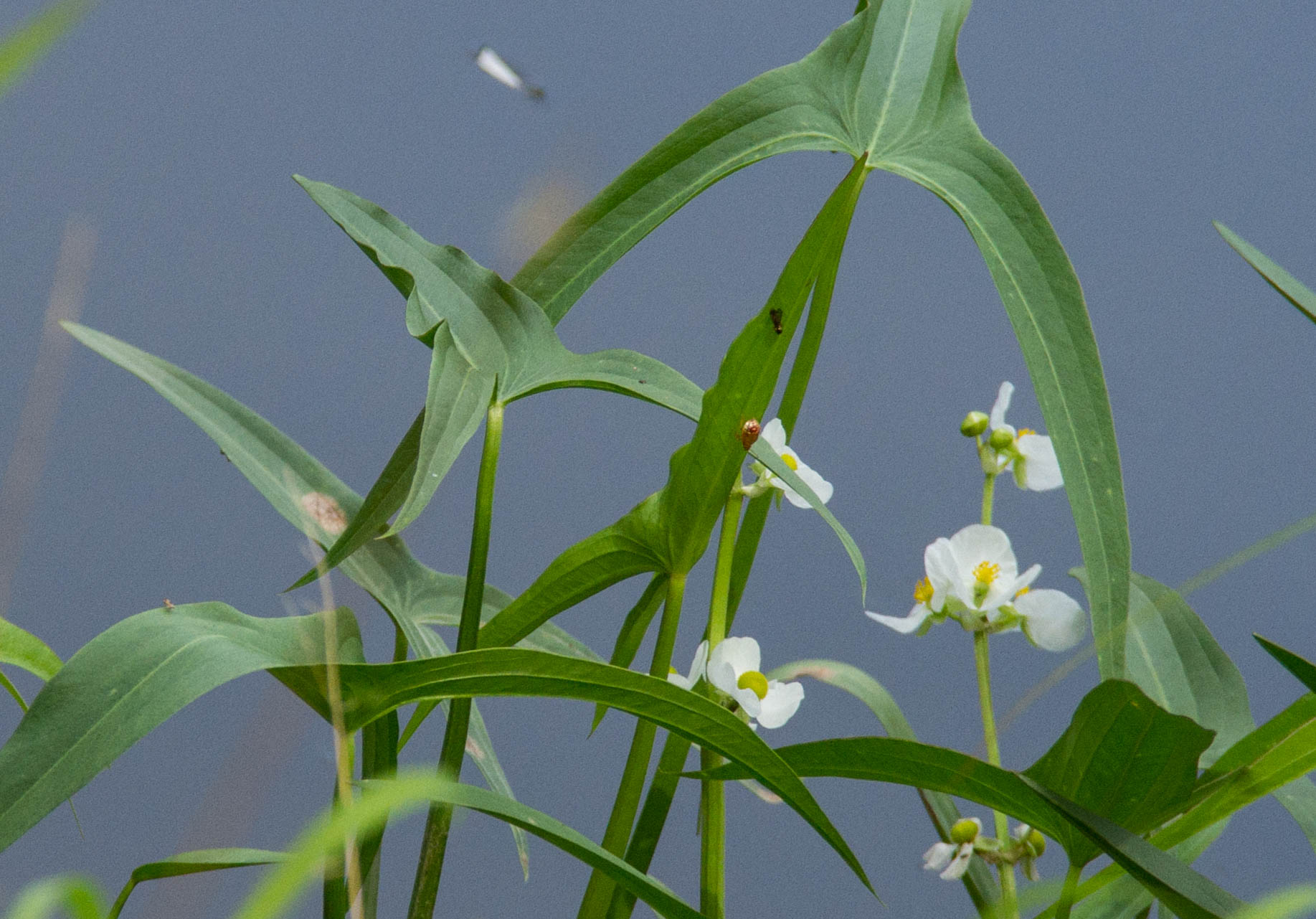 Arrowhead, or Sagittaria cuneata, is also known as Wapato or arum leaf arrowhead. It is an indigenous plant that grows best is shallow, still or slowly flowing water.

Another white wildflower is blooming at the edge of the Skating Pond. 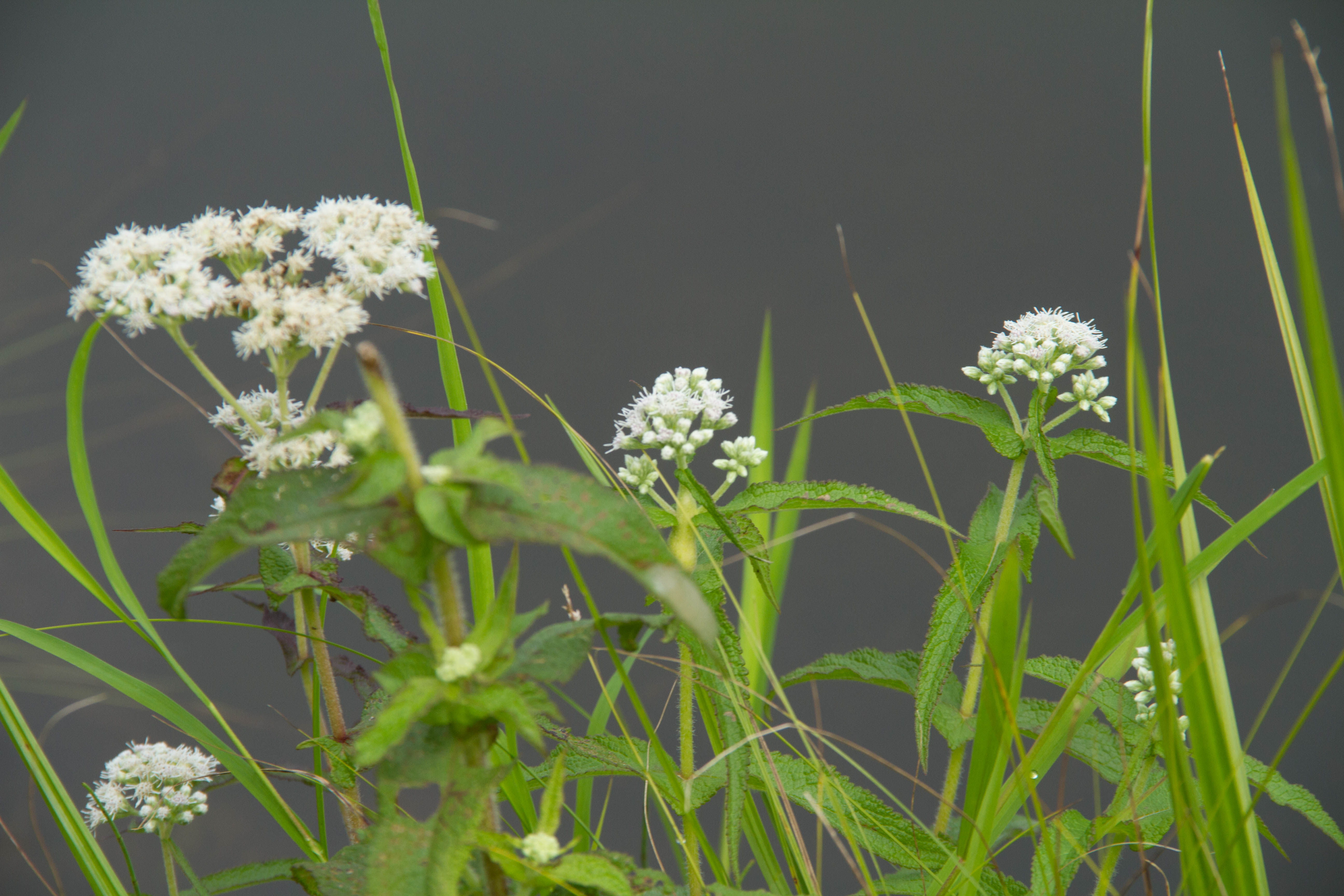 I call this Boneset (Eupatorium perfoliatum). Please correct me if I am wrong.

The spires of steeplebush (Spirea tomentosa) are appearing in every field and damp spot. 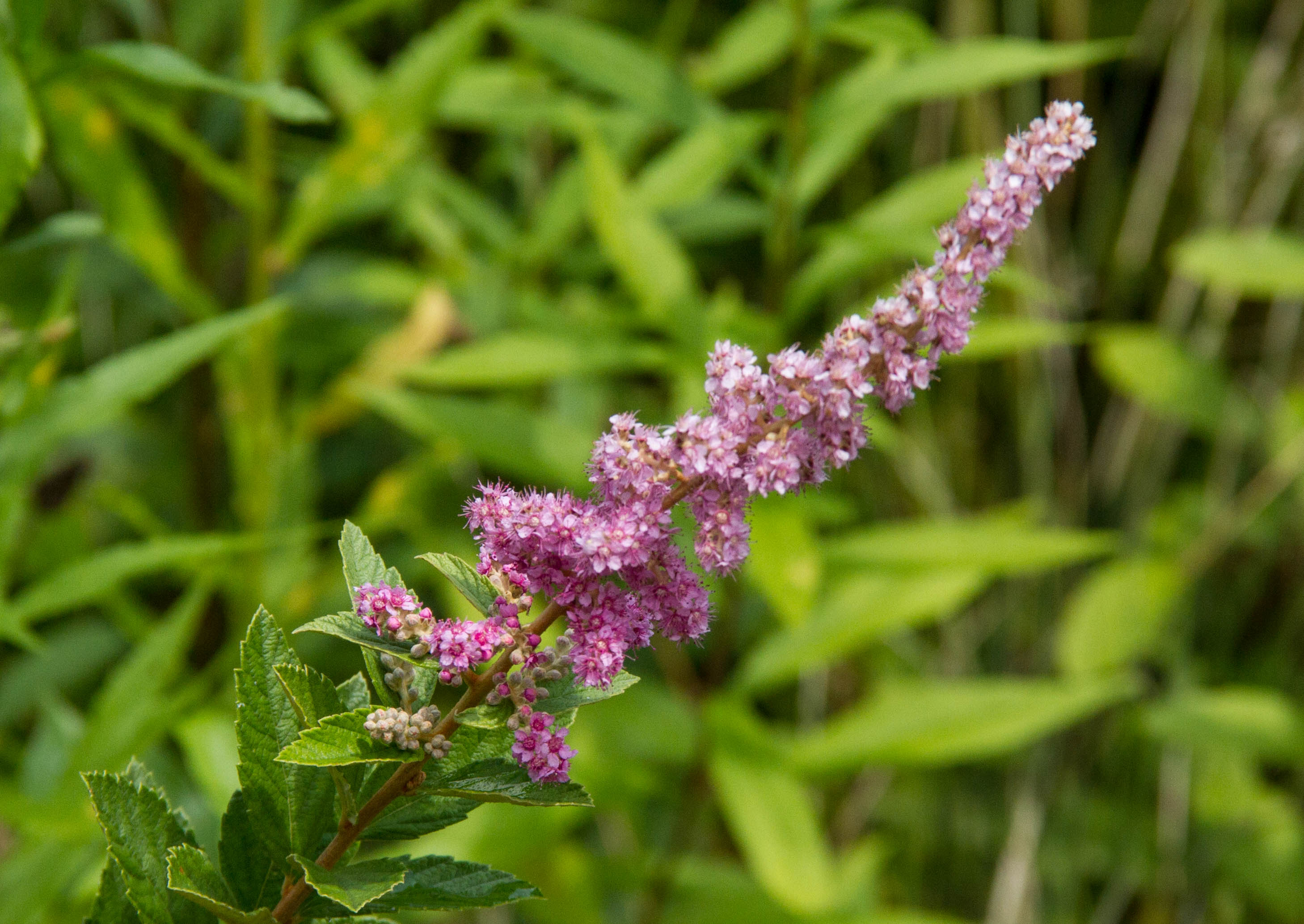 Steeplebush is also known as hardhack on account of the toughness of its stems. Butterflies and other nectar-feeding insects find the flowers highly attractive.

The scabious in the fields has mostly finished blooming but the thistles (probably Cirsium discolor) are continuing the colour theme. 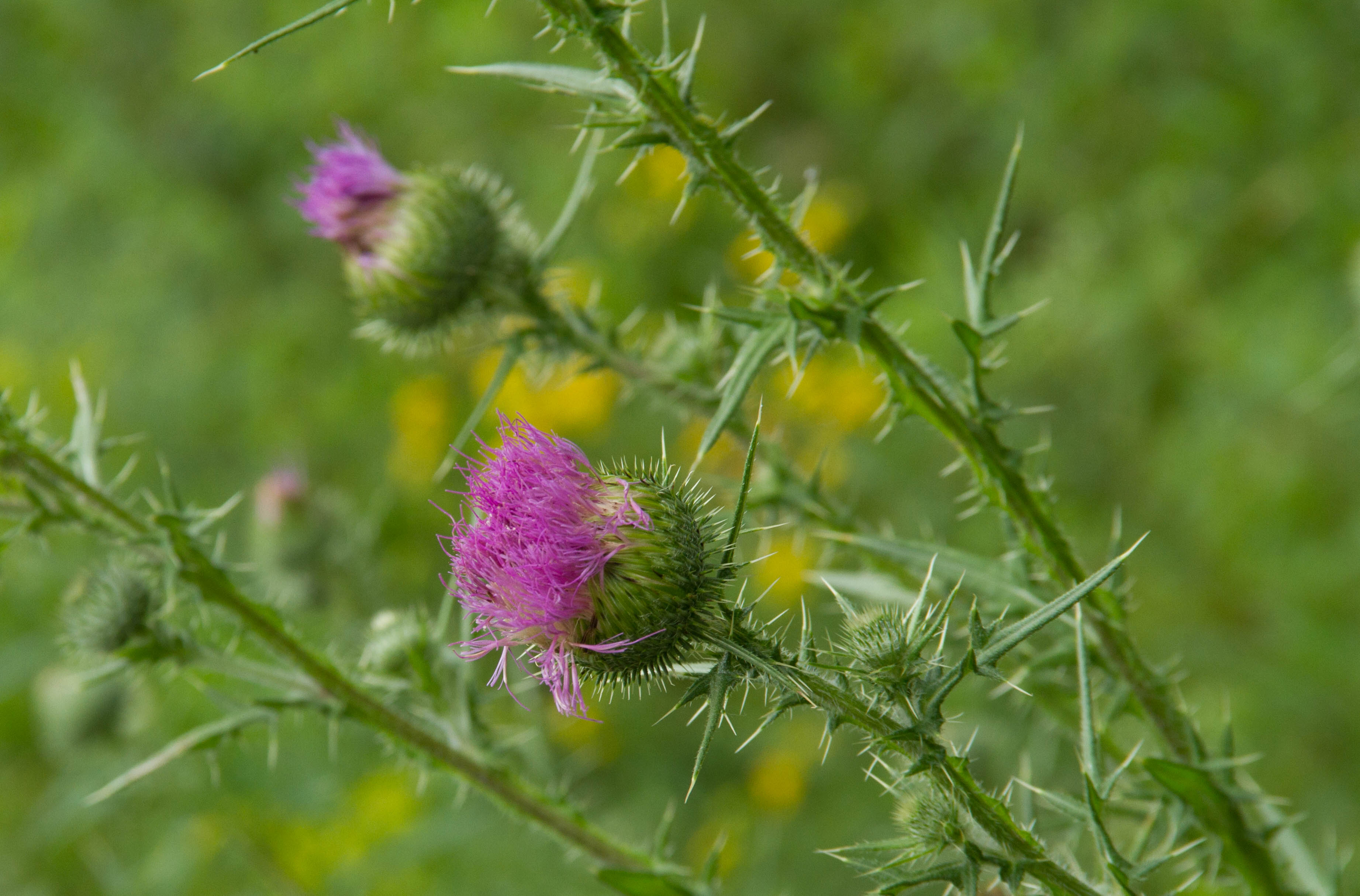 The young leaves and stems of this field thistle are edible if boiled. Or so I’m told. I can’t say I’m ready to try them. Native Americans used the roots to make poultices for treating wounds and boils.

Most splendid is the field of Joe Pye weed. It covers something like an acre of wet ground and photos can’t begin to capture the impact of so many plants in full bloom in a space contained by tall trees. 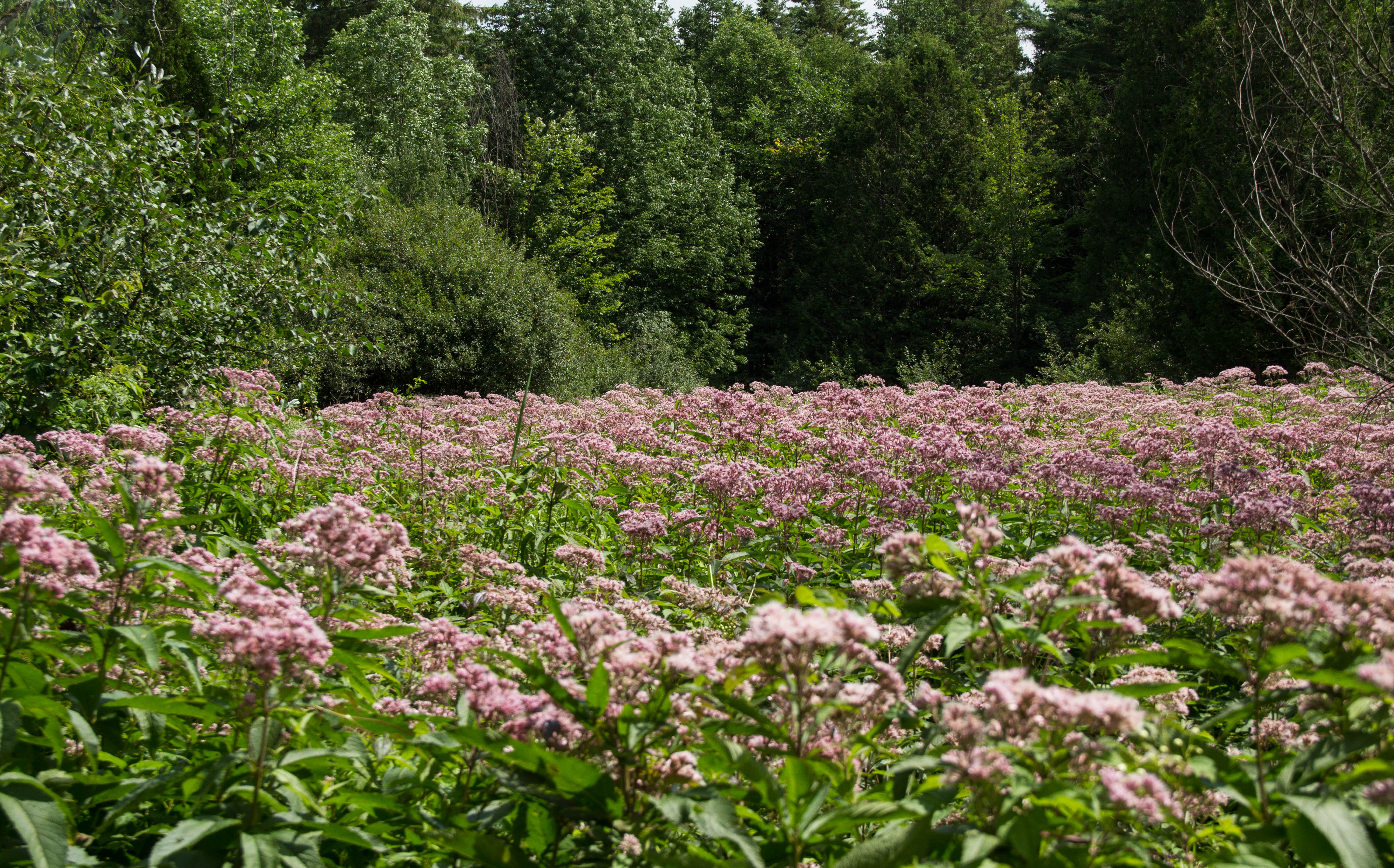 From some angles it seems that the flowers will go on forever.

A single mown path leads through the area. Yesterday, the path was almost blocked by falling stems. Moving along, touching plants carefully to avoid the bees and butterflies, was a breath-taking experience. 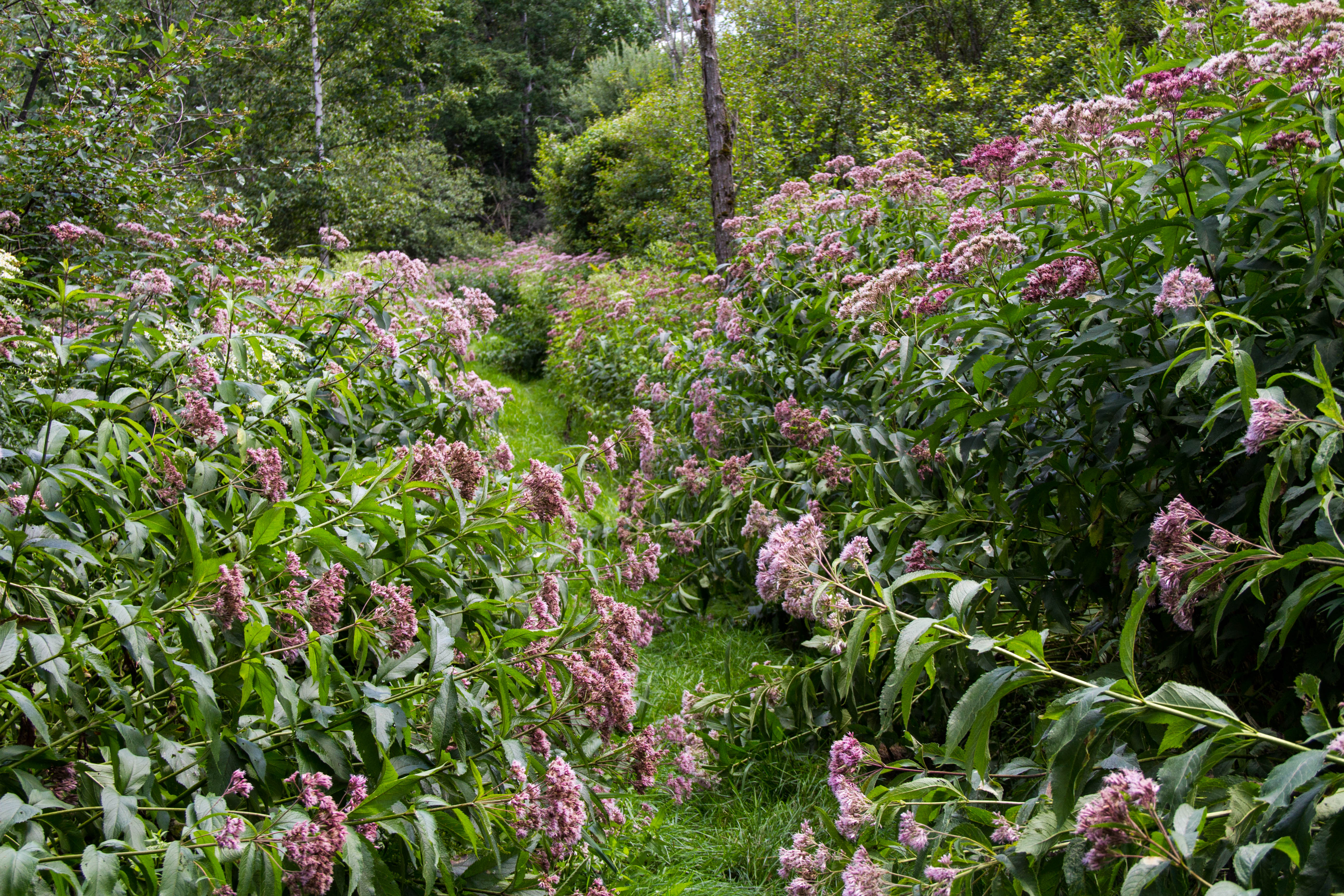 When upright, some of these plants are 7 or 8 feet high.

One of these days we may make a trail into the centre of the display, with a small viewing platform a few feet above ground. I can only imagine how wonderful it would be, to look out on the flowers spreading in every direction.

Or — more likely — we will never get around to it, relying on imagination instead.

I do like orange, particularly with dark purple. But the harsh yellow of so many August-flowering plants doesn’t do it for me. With the hot weather we’ve been having, I prefer cooler tones.

It is truly spectacular.

Lovely as always. But I’m also somewhat surprised by your comments on yellow flowers. Must be my Southern California childhood, but I just love masses of rudbeckia. Not enough sunlight to have that in my tiny city garden, though, so I’ll take what does grow gladly. Have some nice Joe Pye weed too, although the scale is perhaps wrong for our lot. 🙂

It’s the harsh yellows I don’t like. Rudbeckia is fine in a natural setting like the Skating Pond, where it blooms very happily. I cut the orange/yellow/nasty looking flowers off Liguarlia ‘Britt Marie Crawford.’ Their colour grates as badly as chalk on a blackboard. But their big black leaves make them worth growing.

Brings to mind my first experience with frogs in the frog pond and watching the transition from eggs to frogs…great fun! Have they witnessed the smelt run yet?

Saw some people looking for smelts the other day — well, now some time ago. Grandchildren haven’t seen the runs.

So glad that you finally had rain — your garden, of course, is spectacular. We just hope our place in Le Bic got some of that rain, too…. Thanks for sharing your garden.

You are welcome, Lisa. Just read your post about guilt and air plane travel. I think we do what we can to help the environment, hurting it as little as possible, making it as beautiful as possible so that others will also want to guard it.

I love the beautiful simplicity of your contemporary garden.