The Clearing of the Land 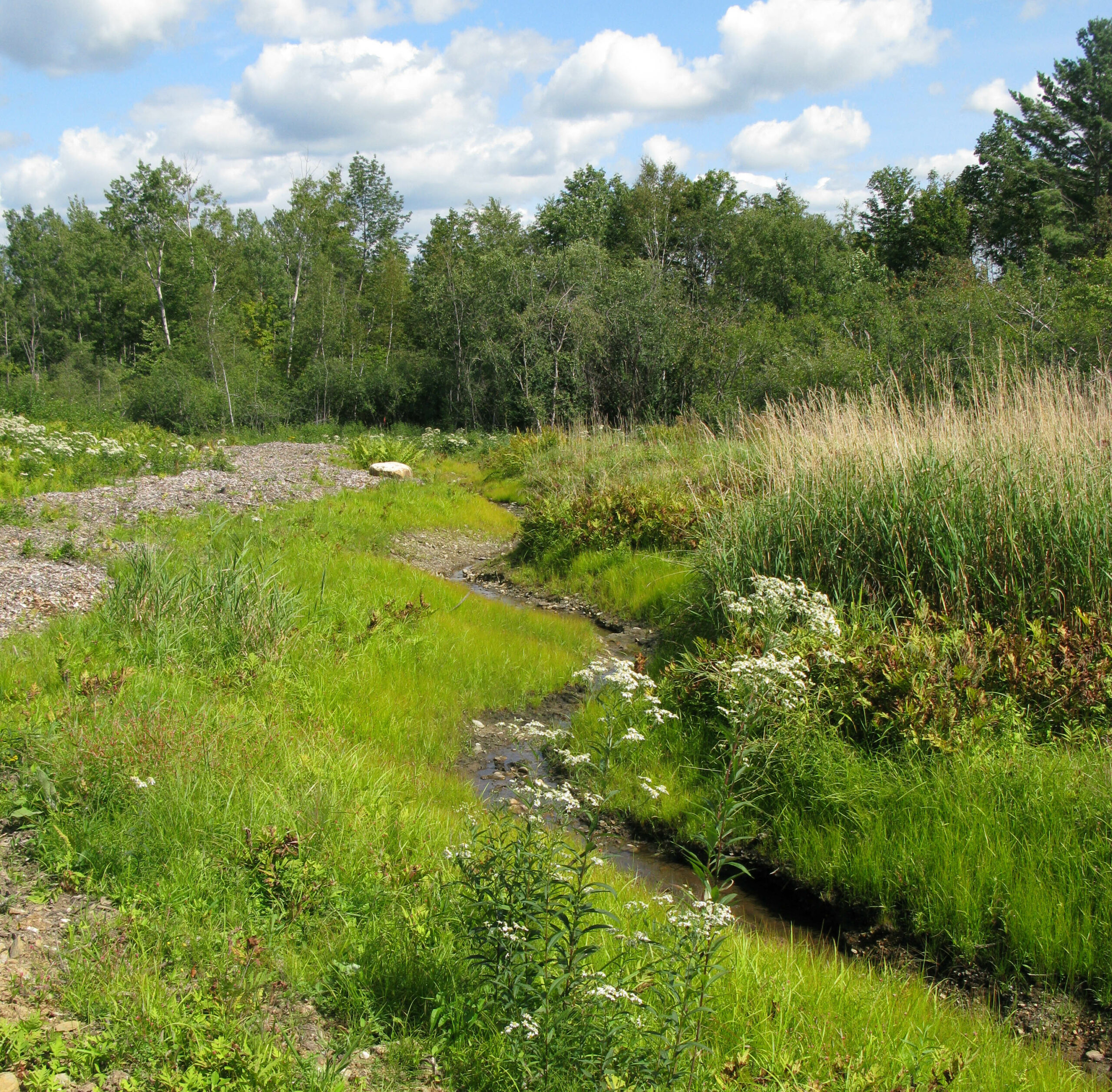 For several years now I’ve been working on a trail that leads through the fields and forests at Glen Villa. Sited along the trail are art installations I’m creating that relate to history, the passage of time and the relationship between art and architecture.

I wrote about this for the first time in March 2017. My focus then was to figure out what to call the trail. Thanks to my granddaughter Elinor, there now is a name. Timelines.

I like the name. It is short and direct yet suggestive of something beyond the literal. Like a line, the Timelines trail leads from one point to another, connecting disparate elements, suggesting how events at different points in time are interrelated even if they aren’t presented chronologically.

Since I wrote that initial post, some of my ideas for the trail have shifted. So has the route itself. Changes to the route came from walking the trail, considering the multitude of possibilities, choosing the direction that seemed to best bring out the character of the site.

Finding the right way to interpret different areas isn’t always easy. One area in particular left me scratching my head. In my first post about the trail, I called this area the water meadow. And while there is a small stream that runs through it, the name didn’t feel right. Nor did the name generate ideas that I liked. 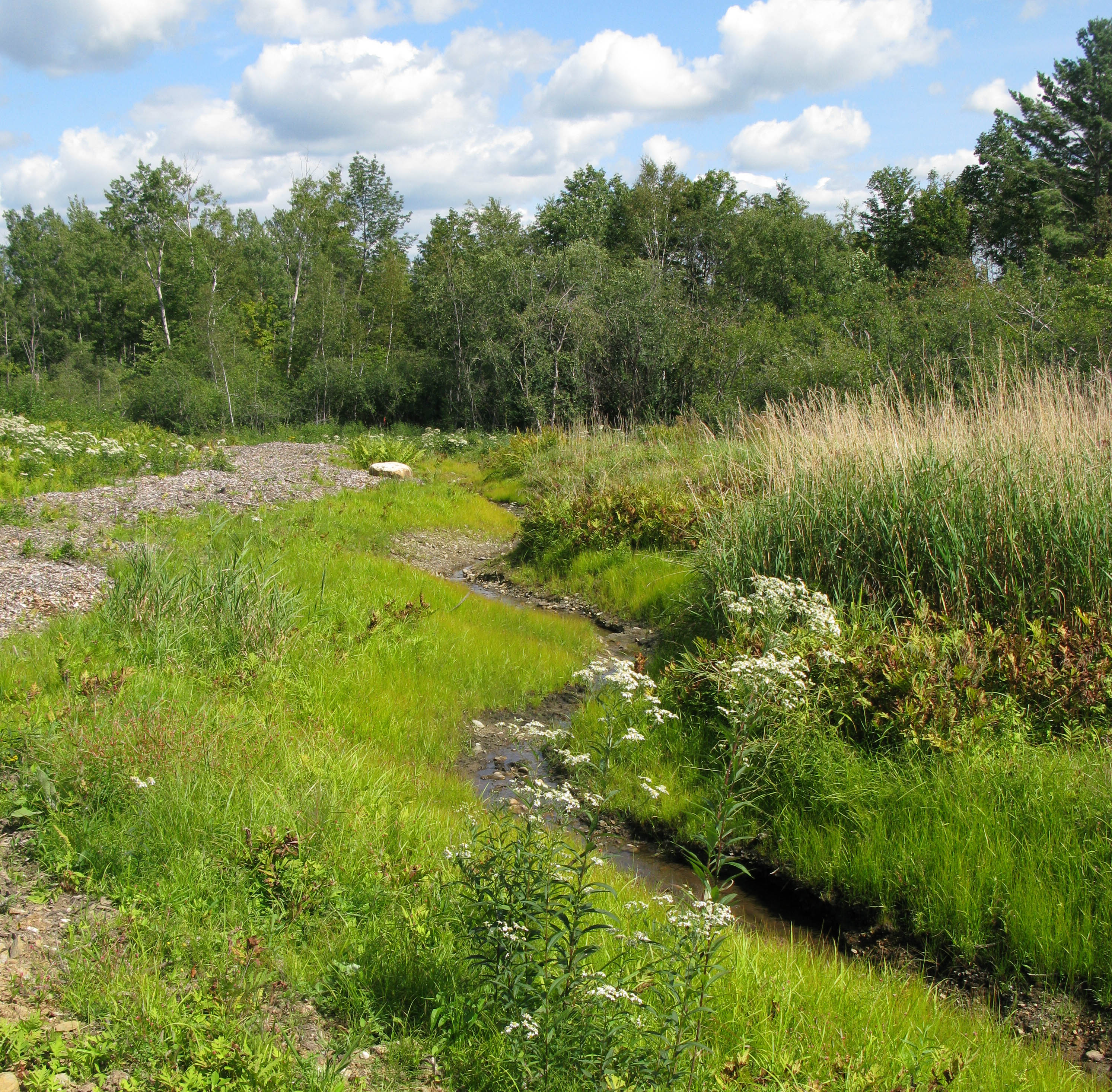 This is how the water meadow looked in 2009 after we first cut a path through it.

The space was large and formless, and by 2017 covered with scrappy brush. 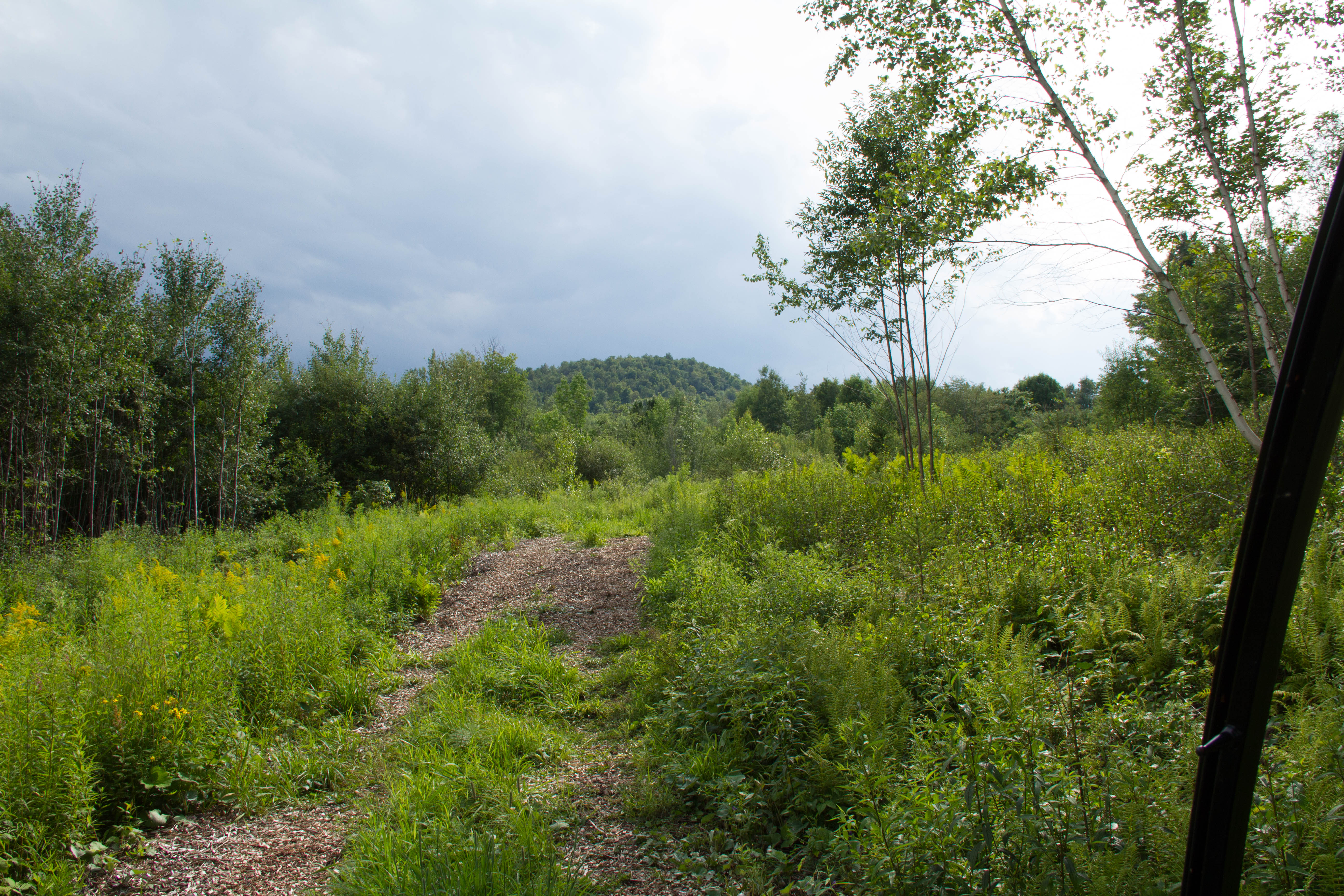 This is how the field looked almost exactly a year ago. The hilltop in the distance identifies the point of view.

To give the area a chance to speak for itself, I decided to cut the brush and expose what might be hiding underneath. 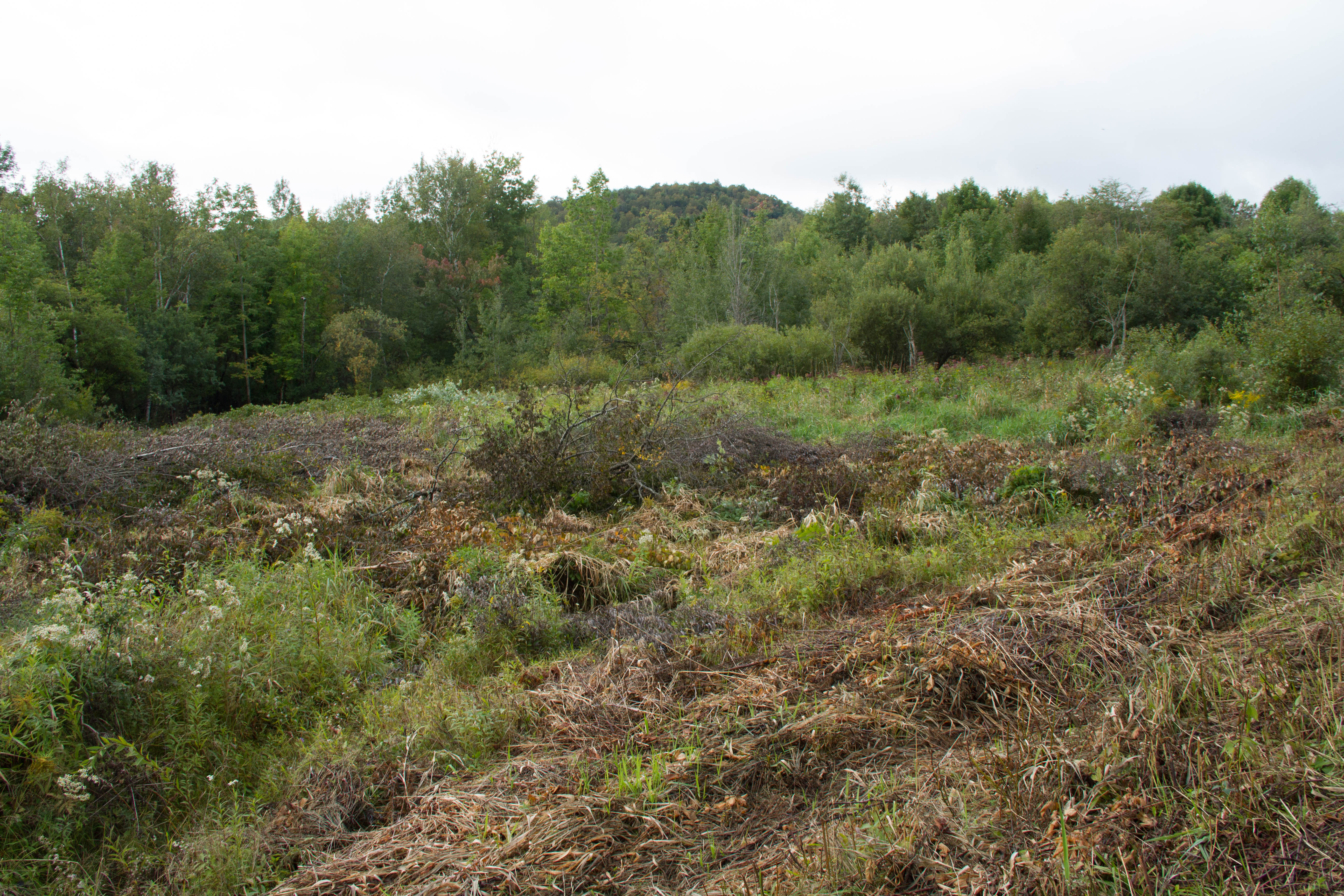 Cutting the brush, we discovered some hidden treasures: a gorge, a rock pile and the remnants of an apple orchard. 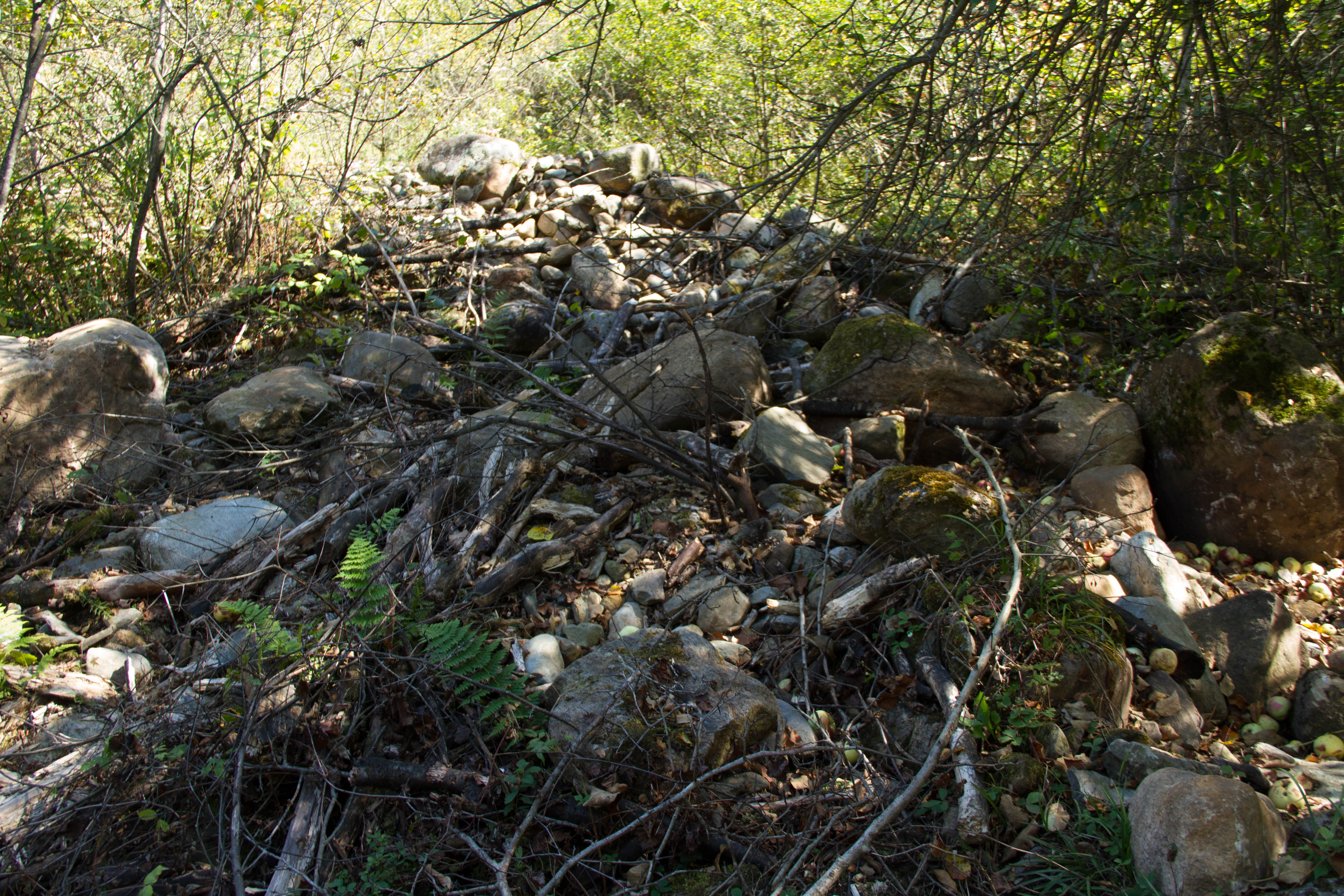 The rock pile resembled a river of rock. Think how long it must have taken to create this river, how many hours were spent lifting and carrying the small rocks or dragging the big ones behind horses or mules.

These discoveries convinced me to re-route the path in order to incorporate them into a storyline that was becoming increasingly clear.  Things finally clicked thanks to my friend John Hay.  You’ve cleared the land, he said. That’s what this space is about.

So the name became obvious — The Clearing of the Land. The name fits historically. This is what settlers did, more than two hundred years ago in this part of Quebec: they cut the trees, removed the rocks and prepared the land for farming.

With the right name, ideas came pouring in. Stumps, up-rooted trees, stacked wood, rock piles — all showing the work that had to be done before planting could begin. The rock pile was there, it only needed to be cleared. The apple trees were there, over-grown but still producing more apples than we could possibly eat. 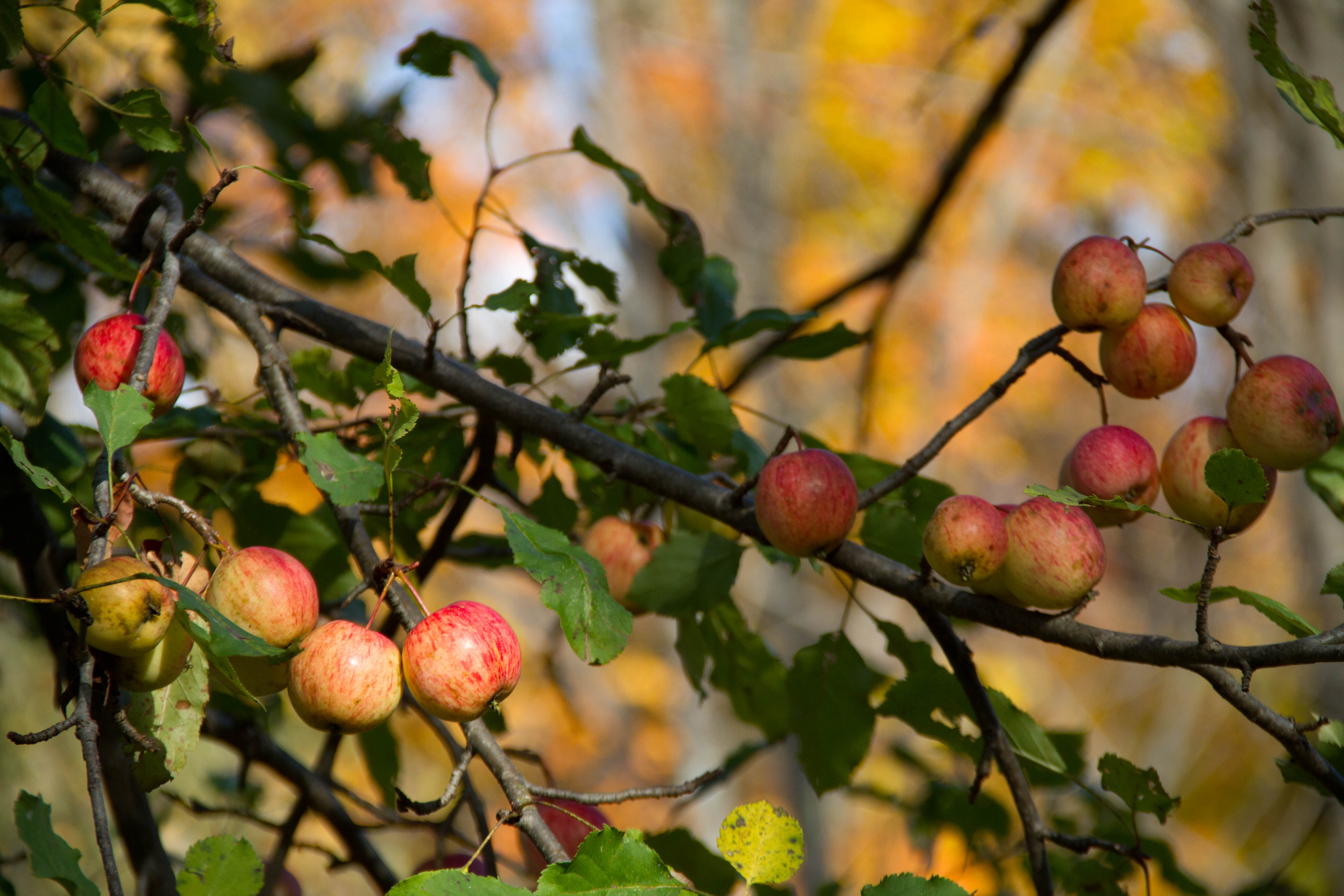 The old apple trees are still producing lots and lots of apples. They aren’t the tastiest but they do make good applesauce.

This is how the area looked this spring, as life was returning to the trees around it. 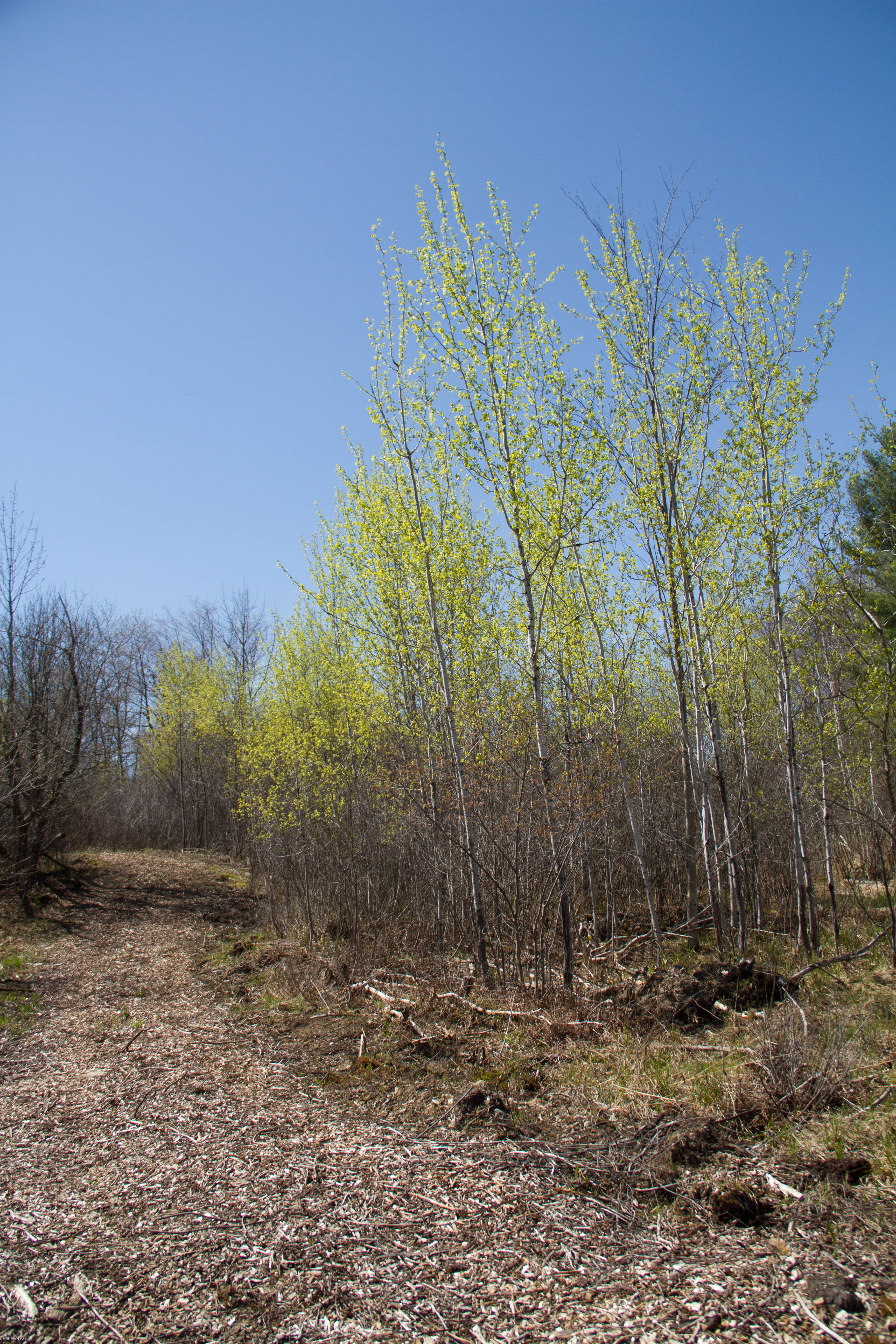 The trees we cut were chipped on site, and the chips spread to mark the path. The rock pile is near the top of the rise, on the left side of the trail. The apple trees are just beyond.

We’re clearing the land with purpose now, removing dead wood and pruning the apple trees to give them a shape. 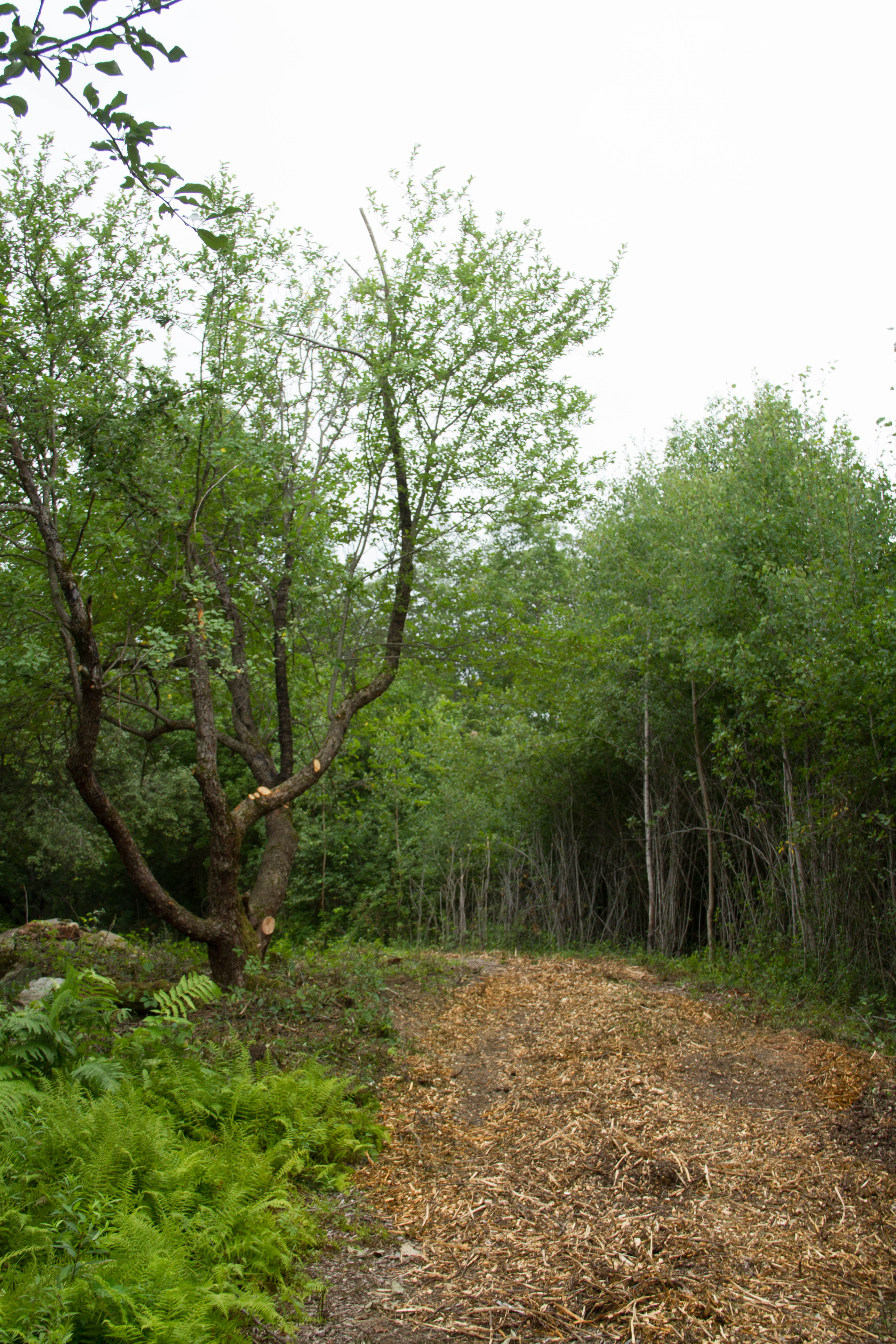 This is one of about a dozen or more apple trees that we will prune.

We’ve just begun clearing the rock pile. And who knows, we may discover that the river of rock is even wider and longer than it now appears. 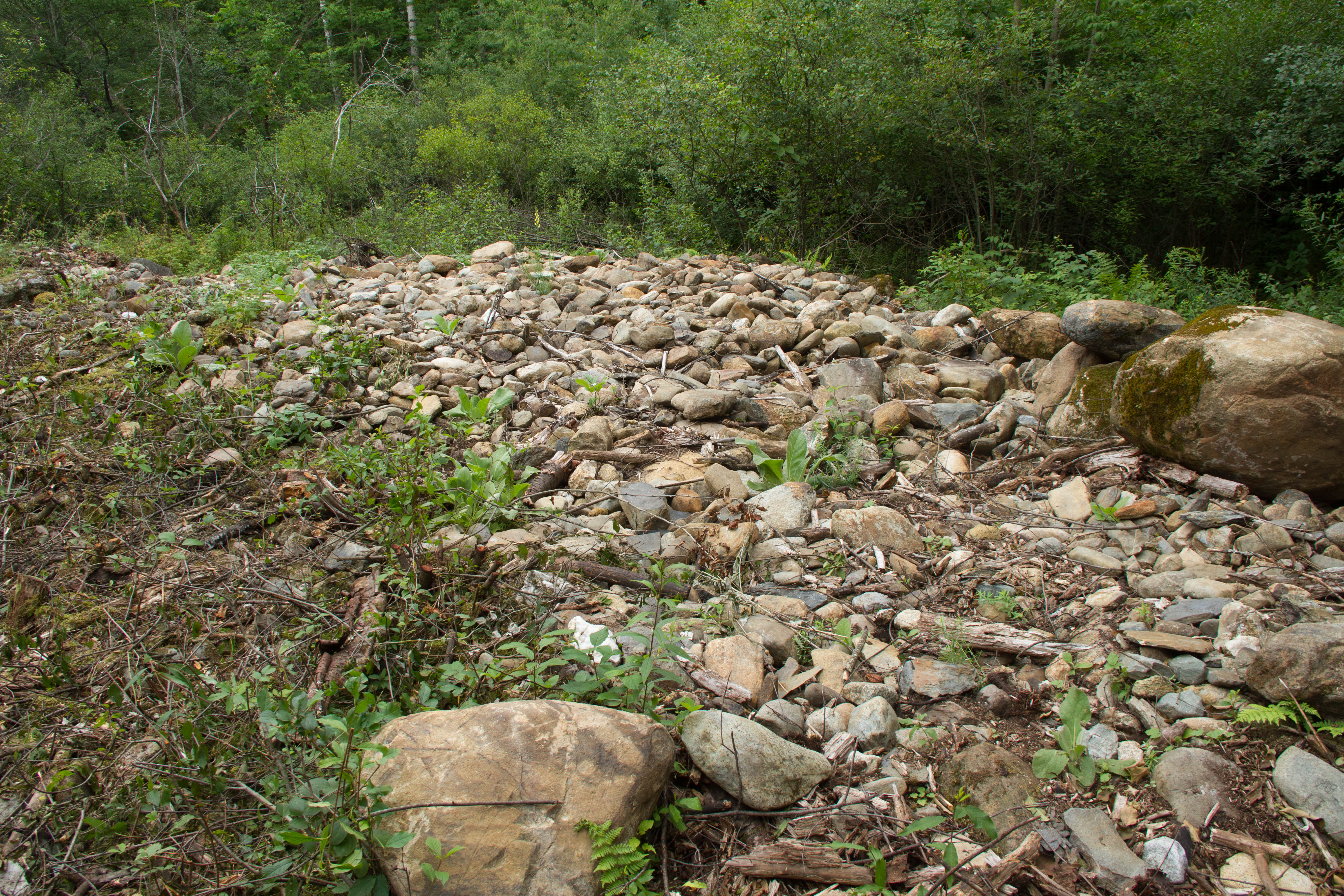 This photo gives only an idea of how many rocks there are.

We will continue to cut the brush on one part of the area, exposing the tree stumps that are there. We’ll find a way to incorporate the wood piles that must once have existed. 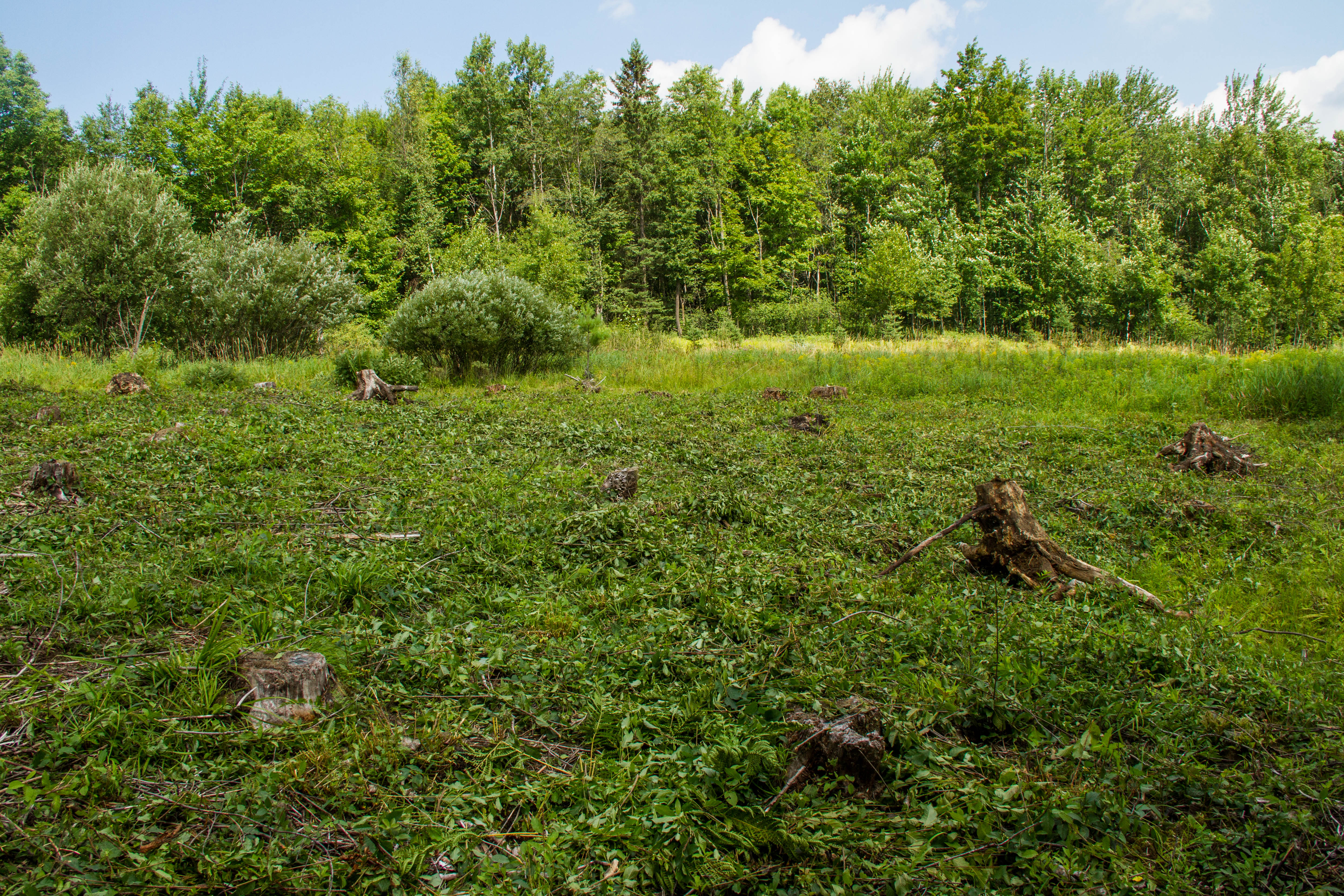 We cut the brush the day before I took this photo and ‘replanted’ most of the tree stumps.

And we’ll create mounds of earth, like tumuli, echoing the shape of the tall hill shown in earlier photos. We’ll continue to honour what came before the land was cleared, when Abenaki walked freely through the woods … 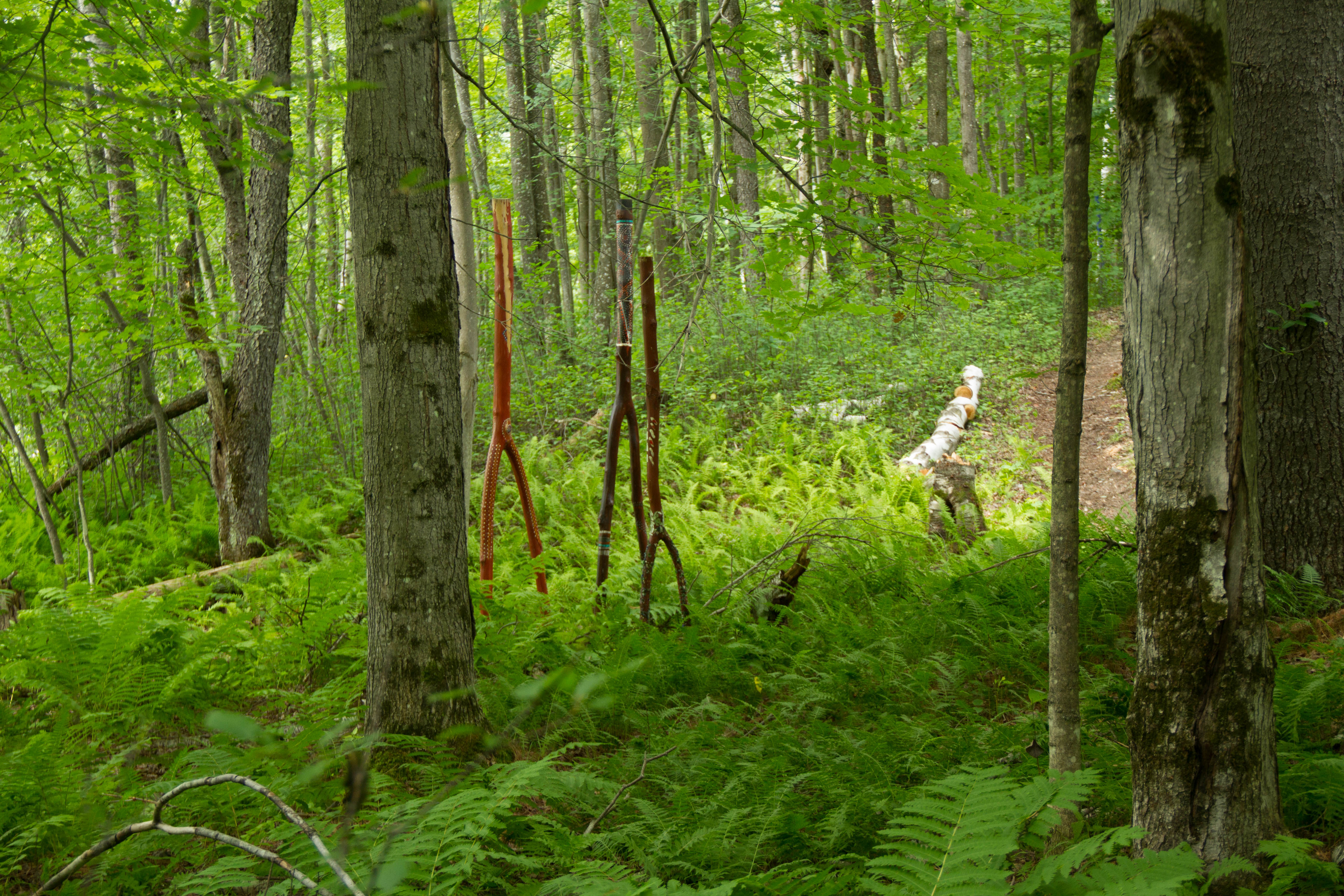 A group of inverted and painted tree branches are reminders of the people who inhabited this land before Europeans arrived.

… and into the clearings, natural or man-made. 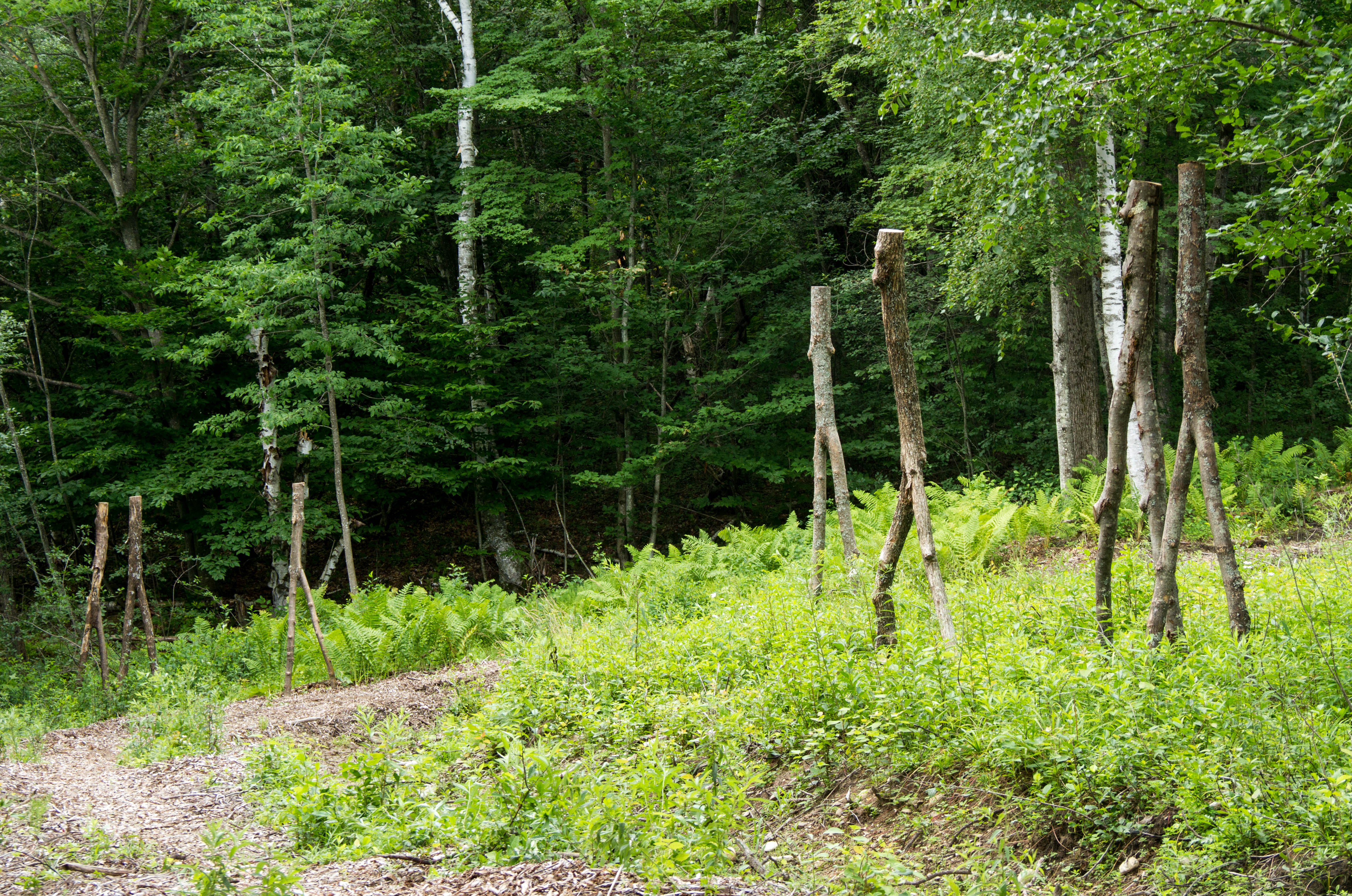 A group of inverted branches walk alongside the path we’ve created. These branches are inverted but otherwise left untouched.

Finishing this section of the Timelines Trail will take a year or more. Brush continues to grow and we need to decide where to cut and where to leave alone. Evergreen seedlings we planted a dozen or more years ago are growing well now, and as they mature, the character of the site may shift. But for now, I’m happy with the progress.

Do you have a multi-year project you are working on? Or are all garden projects multi-year ones?