The dangerous beauty of ice 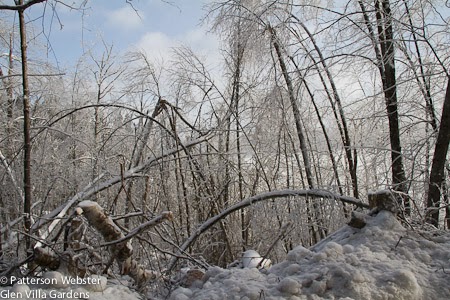 For the first time since I started writing this blog, a post is late, and by several days. Oh, well, it’s the holidays, you may think. But no, for almost a year now, I’ve managed a timely entry despite holidays, vacations and intense pressures to come away from the computer and enjoy myself.

So it’s not Christmas that has delayed things, it’s the weather. Until yesterday morning, December 25, we had no power. For 72 hours, Glen Villa was dark unless the sun was shining. We had no internet, so no blogging was possible. Power was out throughout the region. That meant neither we nor any of our neighbours had lights, telephone or heat. Which made things rather chilly when the temperature dropped to -22C.

But we survived. We even had fun, eating bread and cheese by the fire, telling stories, sleeping under thick layers of blankets. And we simply delayed Christmas until today. (The turkey will go into the oven as soon as I finish writing.)

Everywhere, trees have broken under the weight of the ice. A large birch tree fell across our driveway, making it impassable under the chainsaw did its work. You can see the cut end of the tree on the right side of the drive in the photo below.

Everywhere, trees are hanging their heads, as if ashamed that they can’t stand up to the pressure.

Our driveway gives a hint at how many trees are assuming this posture, and not because they want to.

Hydro company workers did their best. Some people had power restored after only 48 hours, but with the number of broken lines in our heavily wooded area, it took them longer for us. They performed well under extremely difficult circumstances, working late into the night and all through Christmas day.

The ice was dangerous, but oh, so beautiful. Once the sun came out, the land sparkled. Trees glittered, and when the wind blew lightly, they tinkled like thousands of tiny bells.

Winter wonderlands appeared along every road.

Every tree, every branch, every twig was coated with ice.

The view down the lake shows a few small open patches of water. Early in the morning, steam rises from these spots, a sure sign that the water is soon to freeze over.

That was yesterday. And now, today, guess what the weather is bringing us? Snow, of course. Lots of it.

Don’t you just love winter? Well, yes, I do.

Happy holidays to all. Let’s hope that 2014 brings health, happiness and no more ice storms!

Yes, wishing you health, happiness, and no more ice storms! I’m glad you could make the best of a bad situation.

Best wishes to you, too, Kathy.

Both the photos and your words describe the scene so wonderfully, Pat. Joe and I are still without power – now into our fifth day – but, like you we still appreciate the beauty of the Eastern Townships. Happy New Year to you and your family.

Nancy, I hope that soon — very soon — you and Joe will have power again. Going to bed early has its advantages, but night after night it becomes a bit boring.

I was wondering if you were going to be without power in the Hat or Montreal. Beautiful pictures! I am sure weather records were broken for the region, I can’t remember this much ice or the power being out this long. It appears you and your neighbours were the last to get power according to Facebook; Annie and Richard are still without power as of yesterday afternoon. Merry Christmas!

We feel very lucky to have our power restored. My friend Nancy is still without power, now on day 5. That’s hard to take. Happy New Year, Robert.

Amazing! I hope all is well now.

Cindy, the contrast between our environments is stunning, you with so much colour and warmth, me with so much cold. Things are better now but the magnitude of our dependence on electricity is a frightening.