Ornamental grasses, Part 3: What not to do (unless you want a good laugh) 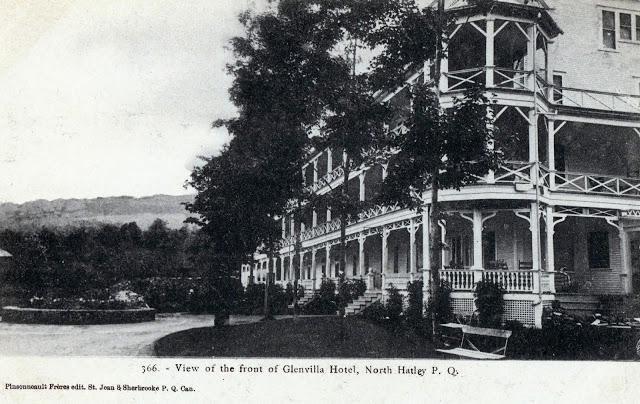 My first attempt to use ornamental grasses was in a section of the garden I call the yin yang. An old resort hotel once stood on the property (to my amazement, I find I haven’t written about that… must do so soon. ) In front of the hotel was a low circular stone wall. Horse-drawn carriages would drop guests off at the front door of the inn, then proceed around the circle and head back out the drive.

When we moved into Glen Villa, the centre of this circle was full of highbush cranberry bushes (viburnum trilobum). It’s a wonderful shrub and I’ve planted it elsewhere, but those bushes had grown too large for the space. The proportions were wrong. So we pulled them out.

Since my husband had grown up at GlenVilla, I thought it would be interesting to connect the story of the hotel with the story of our family. Since we lived in China during the Cultural Revolution, from 1969-1971, I decided to plant the circle in the shape of the yin yang symbol. For the first few years, I used annuals of contrasting colours and heights, to emphasize the notion of opposition that is integral to the symbol and the Taoist philosophy behind it.

After a few years, I got tired of doing the same old thing. So I added a new point of opposition, living and non-living materials. I considered all sorts of materials before finally settling on red brick mulch and an ornamental grass. I chose blue fescue (festuca glauca) because of its colouring. (The ‘glauca’ in the botanical name tells you that the plant is blue or blue-toned.)

I was pleased with the combination of colour and material, particularly when the circle got a new top edging. The bluestone coping added a contemporary flair as well as serving a practical purpose: it held the stone wall together. (Repairing the wall meant rebuilding it, which I didn’t want to do.)

I planted the clumps of grass in rows, a contemporary planting style that I found appealing. What I failed to do was to read anything about how to maintain it. That was mistake #1.

My festuca glauca did not wait for year three. By mid-summer of the second year, it was totally out of control. My neat tidy design was a horror to behold.

I am not a particularly tidy person. I don’t care that much about weeds in the garden. Yet it was obvious: something had to be done.

It took most of an afternoon to cut the grasses back. They looked pretty awful when we were finished but I figured that if we removed half of the clumps, the yin yang would look better the following year. So, come autumn, that’s what we did. We removed all the plants, divided the clumps and replanted.

Then came a wonderful question: what to do with the extra clumps? Where could they go?

On a large property, there is never a shortage of spots. But choosing the right place can take time.  Or should. Was I busy that fall or did the location seem obvious? I gave the question only a minute’s thought. That was mistake #2.

I knew the grass did well in full sun and dry ground — it had thrived in similar conditions in the yin yang. So in the fall we planted some clumps in a gravel bed near the house, keeping them in straight lines that suited the space. We planted more near the beginning of the boardwalk that circles the Skating Pond in the upper field, arranging them in a triangle. I washed my hands and congratulated myself on a job well done. That was mistake #3.

Come spring, there was no sign of the grass by the skating pond. There still isn’t. The clumps by the house looked dead.  They were.

Once again I had failed to do my homework. Because even the most cursory glance at an on-line source would have told me that the fescue does not like being moved in the fall. It doesn’t like being divided, either. Or at least, not at my house.

Granted, they have a bit of competition from some plant material I didn’t put there.

To avoid mistake #4, I finally consulted some on-line sources. Blue fescue is said to be a short-lived grass. So I’m blaming its poor appearance on old age.

There may be other explanations, and I’d like to know them, if there are. Because I have to do something about the yin yang. I want to keep the idea (unless I come up with a better one…) but change the look. So, what should I do?  Ideas, anyone?

I would go back to the annuals in the yin yang; it’s pretty small for the grasses which should get out of control in no time. Maybe doing one half of it with peonies (favorite) cutting down on the back breaking work too.

Interesting ideas, Robert. I also love peonies. But what to use as contrast?

Peonies one side and roses on the other, this could balance it off. Then I would fill with dusty miller, begonias, geranium, lavender, tiger lily, herbs or whatever else they have on special at the nursery that day, Trying to maximize the color here with least amount of effort of course at all times! How is the deer population there now. Here they don’t eat geraniums or begonias. Tulips, pansies, daffodils are also consumed as soon as they blossom. One thing I like out here and you don’t have there is the rhododendron (450 species here) and counting.