The Aqueduct, Part 2: Building It 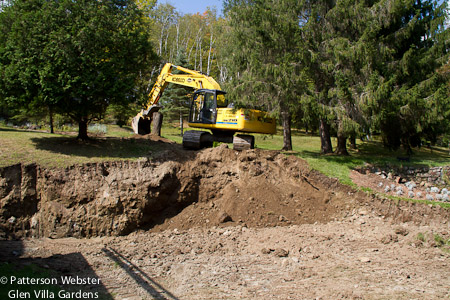 In my last blog post, I wrote about why we decided to build The Aqueduct (The Aqueduct, Part I: Why We Built It). I explained that we wanted to see and hear the stream that ran down the hill near the house, to replace some dangerous steps, and to create a water feature that harmoniously linked disparate elements in the house and landscape around it.

I started planning this project in April 2011, but for various reasons the shovel didn’t go into the ground until September 2012, almost a year and a half later. I knew we were embarking on a major project, and I was apprehensive. Were we doing the right thing?
Would I be satisfied with the results, or would I miss the steep hill that protected the house?

I called on all my courage and watched as the hillside was transformed from a sloping bank to a steep cliff of dirt. There was no turning back.

Some months earlier we had tackled the question of how to terrace the hill. Drystone walls are common in the Eastern Townships of Quebec, but I was apprehensive about a stone wall that, at its maximum, would be 9 feet high. I didn’t want a concrete wall — too industrial — and the idea of a concrete wall faced with another material went against my conviction that materials should be seen as what they are. So what to do?

Years ago, in another house in another province, we installed gabion baskets filled with rocks to prevent erosion along a shoreline. Gabion walls are what you see beside highways wherever a hillside needs to be supported. They are ugly but they work.

It took many conversations to convince my husband that our gabion wall would not be ugly. (Thank you for trusting my judgement, Norman.)

I was wrong on another point, though. In addition to aesthetics, I argued for a gabion wall because of speed and cost. We could dump rocks from one of the many stone piles on the property into the baskets and build the wall quickly.Not so. We tried dumping the rocks, but the baskets bent out of shape. Worse, the side of the basket that formed the front of the wall looked like what it was, a messy jumble of rocks. So the baskets had to be filled stone by stone, exactly as a drystone wall is built, except that the stones were held inside wire baskets.

We built two walls. In between was path that would lead from the deck to a new staircase, yet to be built.

Before the snow fell, our walls were in place and the concrete foundation for the reflecting pool had been poured. Looking down from the house, it was obvious that the pool was too small.  So we extended it, almost doubling the size.

Water for the aqueduct comes from fields above the house and from a wealth of small ground springs. It comes together in a stream that flows through a meadow,

and then cascades into a small pond.

From there it passes under the gravel driveway into a holding pond. The Aqueduct with its elevated rill begins there.

The stream is channeled into a steel U-shaped beam, 12 inches wide. The U-beam is attached to wood posts designed like the ones that support our house. The U-beams, the metal brackets that hold the posts in place and all the other metal work for The Aqueduct were made by a very talented Montreal-based craftsman, François Béroud.

We installed the posts and the steel channel in November 2012, just after a light snowfall. Immediately we were faced with our second on-site aesthetic decision. (The first was deciding to enlarge the reflecting pool.) Were the posts to be the same length, following the slope of the hill or would their tops form a straight line in mid-air? We decided to make them look as long as possible, and not to follow the slope of the hill.

A small upper pond was lifted into place. Water from the U-beam would fall into this pond before entering the reflecting pond below.

We tested the water channel. It worked.

Before winter arrived, the broad wood steps had been built, from trees cut on our property and sawn at the local sawmill.  Four steel plates supported the hill beside the lower gabion wall. I planned to plant something vertical in the space between each plate. I didn’t know what plant I would choose.

With snow on the ground, work stopped for the winter. Looking out from the kitchen, I sighed with relief. The staircase, with its broad steps, was now safe.  The gabion walls were attractive. I could tell that the changes were going to work. The disconnect between the house and landscape was going to disappear. The lines didn’t yet relate to one another,  but I was confident they would, once the reflecting pond and the plantings were complete.

In my next post I’ll write about the plantings and where we are with the project now.