The Aqueduct, Part 1: Why We Built It 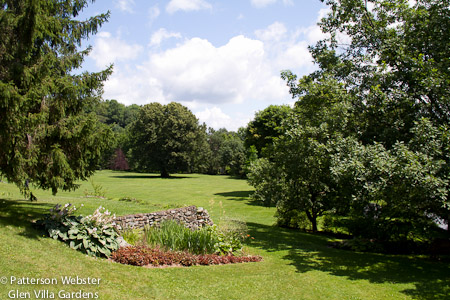 When my husband and I bought Glen Villa in 1996, we moved from a little lakefront cottage into the house next door. We acquired a property that had been loved and looked after beautifully. We counted ourselves lucky indeed.

We often sat on the deck
looking out towards the magnificent linden tree at the end of the big lawn. We ate breakfast and lunch there, entertained friends, enjoyed the view. Sometimes, in the background, we could hear water trickling over rocks, but we couldn’t see the water. And most of the time, we couldn’t hear it either.

From the deck a stone wall which had been the foundation of a summer cottage torn down long ago was front and centre in our view. I liked the history the wall conveyed, the feeling that the past was present, very much with us every day. But visually it was a hard element in an otherwise soft landscape. Built from field stones, the wall’s triangular shape was also hard. And hard to work with. I tried various planting schemes over the years, but nothing felt right.

The stream we heard occasionally was in front of the wall. Over the years, it had cut a channel into the ground. The stream was visible only when you stood next to it, looking down. In some places you couldn’t see the stream at all, because in strategic spots, like the grassy area on the right of the picture above, it had been channeled underground to allow lawn mowers and other equipment to move easily from one side of the stream to the other. This seemed a pity. No, more than that. It seemed a true loss. A wonderful natural feature was being hidden away. Wasted. I couldn’t hear the water and I couldn’t see it.

I wanted both. I wanted the full orchestra of sounds that water produces as it moves and falls. I wanted a calm surface as well, so the water could reflect the world around it. A stream hidden partly underground provided neither.

But even if the water had been visible and audible, I knew that something about the space was wrong. As beautiful as the view onto the lawn was, it unsettled me. I didn’t know where to look. There were strong lines going every which way: the lines of the house, the deck and the stone wall. The lines didn’t relate to each other, they didn’t connect. The space was full of beautiful elements but it didn’t hang together.

There was a practical problem as well. The steps leading from the lawn up to the deck where we spent so much time were made of huge boulders, flat on one side.

I loved the way the steps looked, and enjoyed the slightly treacherous ascent and descent, through foliage that partially blocked the way.

But increasingly my husband and I were finding the steps a little too treacherous, particularly when wet. We weren’t old but we weren’t as agile as we used to be. Nor were our friends and visitors. And there were young grandchildren to consider.

There was a significant disconnect between the house and the landscape. Almost every garden design book will say how important it is that the house and its surroundings suit each other, that they fit. Our rough-hewn steps suited the natural landscape but not the house.  The same was true for the plantings by the steps and the stone wall. They were soft, gentle and traditional . But the house is not gentle, it’s strong. It is a contemporary design, built in the late 1960s, influenced by Frank Lloyd Wright, and with a touch of zen in its combination of dark and light, full and empty spaces, that make it special. Constructed from natural materials  — field stones and wood, with barn board facing the exterior — it’s composed of straight lines and angles that jut into space. The space around it needed to conform.

These issues dictated the design of The Aqueduct: a desire to see and hear the water, and for the water to reflect the sky; a need to have safer access from the deck to the ground; and a plan that brought disparate elements into harmony in a way appropriate to the design of the house.

I knew the stone steps had to go, but what would that mean for the hillside that sloped so steeply? I wanted a reflecting pool at the bottom of the slope, but would it look like the hill was sliding into the pool, visually if not literally?

The design and especially the engineering of this project went beyond my abilities.

I called on the Montreal firm of landscape architects I have worked with since 1998, Hodgins and Associates. Myke Hodgins and his associate Eric Fleury came up with several proposals. Each had advantages, but the one with an elevated rill that channelled water into the reflecting pond was intriguing, innovative and compelling. We went for it.

Eric Fleury has guided the project through its many stages and I’ll write about these in the weeks to come. To say the process has been long and complex is to understate the case. At each step there have been multiple decisions, and each decision has brought consequences, which have led to more decisions.  In other words, it’s been constantly challenging and lots of fun.

The results so far are a delight. We need to fine tune many things, including the sound of falling water. This will take time. But so far, so good.

Looks wonderful! Can’t wait to get the gang organised to come…tho may be late July rather than early.
Love the posts
liz…

I look forward to your visit. Glad you like what you are seeing and enjoying the posts.