Snow: can this be May? 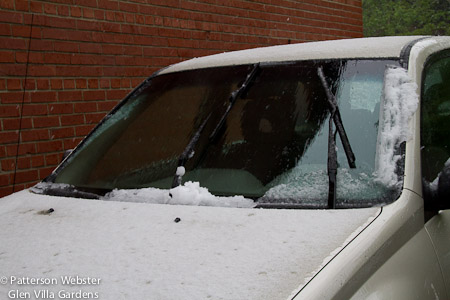 Folk wisdom in Canada says that it is safe to plant tender annuals after May 24. Why that date? Because it’s Queen Victoria’s birthday. (Don’t ask, it makes no sense….)

Generally, this is a safe guideline. But day before yesterday, on May 25, it snowed. It was cold — almost freezing, in fact. And we lost power for 16 hours. Not fun.

In the garden, Daphne ‘Carol Mackie’ was in bloom. The photo below isn’t great. I’m including it because of the snowdrops — that’s what those big white blobs are.

It snowed for a while but mostly it rained. We didn’t receive a full 40 days and 40 nights of it but the downpour was more than enough to fill the pond to overflowing.  Water thundered over Glen Villa’s magnificent waterfall, built sometime around 1880 to provide power for a sawmill, long since gone.

The amount of water was impressive. Normally, water comes over the central section of the waterfall, but there are two side channels for the overflow. There’s a third channel that handles run-off from the fields above the driveway. All of them were full.

Naturally, despite the cold, the rain and the snow, I went out with my camera to capture the moment.

I use a Canon Eos 7D, a brute of a camera that I love.  I can speed it up or slow it down, change settings until the cows come home. Most point and shoot cameras offer a similar range of choices, but few people take advantage of them.

Which is a shame. Photographing fast-moving water offers interesting choices. Do you want to slow down the shutter to show the water as a blur, or speed it up to stop the drops in mid-air? The photo above gives a general sense of the scene. It is dramatic. But compare it with this one:

By speeding up the shutter, I stopped the motion.  The effect is familiar: endless commercials (milk being poured into a glass comes to mind) use the trick. But familiar or not, it works.

The effect is similar in this photo of the Cascade, a construction near the front door of our house that was one of our first garden projects after we moved in to Glen Villa.  Individual drops of water appear frozen in mid-air, even though they are falling and splashing. 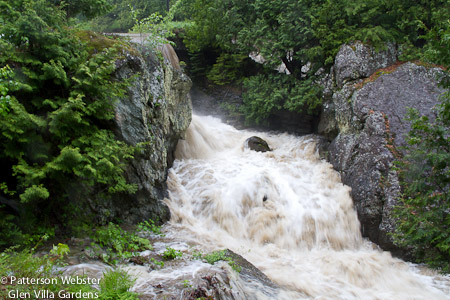 In the photo above I took the opposite approach. Slowing the shutter speed to 1/20 of a second  blurs the movement. Note too the contrast between the fast-moving water and those huge boulders that aren’t going anywhere: an interesting tension that adds to the drama.
Shutter speed is only one aspect of photographing moving water. Consider as well the angle, or point of view. Do you want to shoot the water straight on or from the side?
Playing around with your camera takes time but it’s fun to discover how a single scene can change as you change the settings.
It isn’t easy to say which photo is the best. It depends on what you are aiming for.

I wanted to show the force of the moving water and the power of nature. Which photo/s do you think shows that best?

Terrific article, Pat.
For what it’s worth, I think the slow shutter speed shows the power, and the fast shows the delicacy – at least from your pics.
We were in sunny Toronto to see Book Of Mormon (awesome) and so missed this crazy weather.
Lew

I like your analysis, Lew. I hope to see Book of Mormon one of these days. You were lucky to miss the crazy weather.