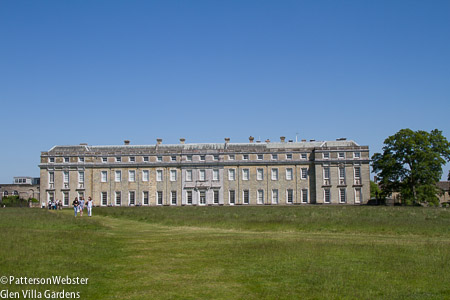 I’m in England for the next few weeks, visiting a friend before setting out on a tour of English gardens. On the weekend I spent a glorious afternoon walking through a landscape designed and constructed in the 18th century by Lancelot ‘Capability’ Brown.

Brown created an estimated 170 landscapes in England, many of which remain. Petworth in Sussex, is one of these, and it shows all of Brown’s characteristic trademarks.

First of these is the broad lawn that sweeps
from the house down to an artificially created lake. This simple feature was one of Brown’s specialties, and it marked a major change from the elaborate parterres that had come before. The lawn looks natural, as if it was always there, but Brown created it, by moving around a lot of earth.

Not only did he flatten the ground in front of the house, he also raised it on one side. A gentle slope  stops the eye from wandering and focuses it  on what is directly ahead: a long view of lawn, sweeping down to a lake in the distance.

No plantings clutter the space. Grass comes directly from the base of the house down to water’s edge, where grass and water meet on level ground. This level edge allows you to look across the surface of the water rather than down at it, so that the reflective qualities of the water are enhanced and it more perfectly mirrors the sky.

As he did so often, Brown shaped the lake at Petworth, hiding one end to create a seemingly endless body of water. The effect is magical. In the distance dense plantings make the water appear darker and more mysterious. Something is there beyond the bend, but what? It’s impossible to see, impossible to know.

On the slope that frames the view, a well-positioned urn marks a destination for both the eye and the foot. From the top, I could look down to the lake or back to the house that sat there in unadorned Baroque solitude.

The urn also marks a transition from open sunny lawn to shadowy copse. This movement from light to dark is characteristic not only of Brown but of his predecessor, William Kent, who used it to great effect at Rousham, one of my favourite English gardens and one I’ll be visiting again next week with the tour I’m leading.

The trees in the copse must have been planted by Brown. They are enormous, and enormously impressive.  As is the landscape itself. The work was done before the age of tractors and backhoes, by horsepower and men with shovels.
Brown got his nickname because he could see the possibilities, or ‘capabilities’ of a site. Once seen, he went to work to transform possibility into reality, shaping the land and planting trees at key points. Slope now meets slope in soft tangential curves that appear natural but aren’t. Trees cluster in copses, dot the brow of the hill, or are massed to form a wind break or mark a boundary.
Typically in the 18th century, the boundary was invisible, thanks to a ha-ha, or hidden ditch, that made the greater countryside appear part of the landowner’s property. At Petworth, the ha-ha separating house and field works in reverse. Instead of keeping animals away from the house, it keeps them out of the walled pleasure park.
The pleasure park is filled with ornamental shrubs, mown walks, urns and temples. Most picturesque is the Ionic temple, now fringed with azaleas just past their peak.
Brown’s landscape parks were expensive to build but cheap to maintain. Land that had been used for formal gardens and parterres was no longer wasted on such frivolities but instead was turned to profitable use, primarily grazing for sheep and cattle. In large measure the economic benefits of this change explain why landscape parks became so popular. Little was needed to maintain them and they were net income producers. Moreover, they had recreational value: the copses, boundary plantings and open fields provided an ideal environment for hunting and shooting.  The land became productive and enjoyable while its natural beauty was enhanced.
Brown compared his work to a literary composition: “Now there I make a comma, and there, where a more decided turn is proper, I make a colon; at another part, where an interruption is desirable to break the view, a parenthesis; now a full stop, and then I begin another subject.”
Brown’s landscaped estates created a private world where the landowner was lord of all he surveyed. No wonder they were popular.
It’s difficult to ignore the side effects, though: the common lands that were enclosed, the villages that were moved, the people whose lives were disrupted.
His reputation has waxed and waned and waxed again. The pro-Brown camp calls him a genius, a creative artist who produced landscapes that were balanced, harmonious and fluid. That anti-Brown camp calls him a destroyer of the past, a one-idea man who churned out formulaic gardens again and again.

Whichever view you hold, his impact is clear. Brown created the distinctive curves and contours that became essential features of the English landscape, and that continue to define it today.

Wonderful analysis and photos! I had heard of “Capability” Brown but knew nothing beyond the name and profession. It’s wonderful to see this example of his work.

I am very happy and pleased to hear that my little post was found useful,

If you are looking for a holiday in sitiges then visit our website: http://www.searchsitges.co.uk. we are the No. 1 Company For planning a holiday in Uk.