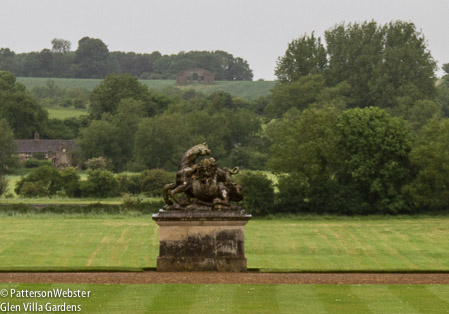 In England, the idea of enlarging the view beyond a garden wall — whether the wall is real or metaphoric — dates back to the 18th century. The furniture and landscape designer William Kent is said to be the first to recognize that land outside a garden’s designed space could appear to be part of it. He understood that someone else’s fields or farmlands could be ‘borrowed’ visually to make one’s own lands seem larger.

At Rousham House in Oxfordshire. Kent “leapt the wall and saw that all nature was a garden,” according to the 18th century writer Horace Walpole.

Kent’s garden there has scarcely changed since he created it between 1737 and 1741. On a far distant hill, at the end of a long lawn that served then as a bowling green, his eyecatcher still stands out against the green fields that signal England’s agricultural past.

This past week, I’ve been leading a group of women around English gardens.  We have visited enclosed gardens that turn their back on the outside world and others, historic and contemporary, that  ‘call’ the landscape in.

The gardens that open themselves to the wider world do this in different ways, with different effects.

At Pettifers, the Oxfordshire garden of Virginia Price, a flat lawn reminiscent of Rousham’s bowling green, stretches out towards open countryside. There is no sign of a boundary and no hint that a whole other garden lies between the manicured strip and the distant fields.

At Broughton Grange, also in Oxfordshire, the contemporary garden designed by Tom Stuart-Smith, is partially walled and partially open to the fields beyond. There is no single sweep of open field there but rather plantings that move and shift in a continuum of colour. Individual trees tower over the trees around them in the same way that the topiary does in the terraced gardens in the foreground. The harmony of colour and repetition of shape unite the two, making the agricultural landscape appear as designed as the garden.

More often the visual link between garden and borrowed view works in the opposite way. Instead of the garden mirroring the fields, artifice extends into the fields and marks them with a human touch. This is what Kent’s eyecatcher does at Rousham; it also occurs in another part of the garden at Broughton Grange.

A mown strip extends from the renewed Victorian garden into the field beyond. The strip is the same width as the garden and trees planted at regular intervals effectively emphasize the distinction between the tended and untended land. In a classically formal garden a statue or large urn would sit at the end of the view line, serving as a focal point and as a reminder that man was ruler of all he surveyed. In modern gardens, the point is made more subtly, but it is there all the same.

Views are often created by cutting a window into a wall of vegetation, opening up the view beyond.

At Bryan;s Ground, a garden on the Welsh border, the owners left a gap between large shrubs so the eye travels through the water meadow to the fields beyond. Removing the trees or shrubs that get in the way of a long view is easy if you own the land, more difficult if you have to negotiate with your neighbours.

At The Grove, the society designer David Hicks purchased a piece of adjoining land in order to cut down trees that limited his view. The sightline he created was much more expansive but it included orange tiled roofs that offended his eye. To block them out, he built three large wooden pyramids, pulling them around until their arrangement satisfied his aesthetic.

He removed a section of brick wall to widen his view onto the surrounding fields, then planted a grid of trees beyond to structure the space.

Reflecting pools are another way to enlarge or borrow a view.  The photograph below shows a view of the sky and the chimney pots on the top of Gothick House, owned by the renowned garden photographer Andrew Lawson and his wife Briony, a sculptor.

In this village garden there are no field views to borrow. Instead the pool surrounded by clipped boxwood looks up, cleverly bringing the sky above into the garden below.

Water can borrow a view in magical ways. At the innovative Welsh garden Veddw, curved hedges in interlocking patterns are reflected in a dark pool. Framing a view of the woods beyond, the reflections enlarge the space to bring a wider world into wavy focus.

Vedddw is a very special place. When I visited it yesterday, I was struck by the sensitivity with which the owners, Anne Wareham and Charles Hawes, have included the world beyond the garden in their mental as well as physical view.

In one section of the garden, peaks of green rear above the rolling hedges, reproducing the shapes of the natural landscape in the distance. In another section, low boxwood hedges map out a tithe map, reproducing the divisions of the surrounding land in the early 1800s.

Deliberately recognizing and honouring the people who lived on the land many years ago is a deeply respectful way to ‘borrow’ a landscape. It is an approach I’m using at Glen Villa, and I was touched to learn that others, in a totally different setting and in a totally different way, honour the past of their landscape in the same way.

At the Cass Sculpture Foundation in Sussex, l borrowed the landscape digitally. Reflected in a mirrored sculpture, I made myself part of the world behind me. This was the land I had just walked through. So looking forward, I became part of the past.

The weather during our trip has been predictably changeable. The day I photographed myself was warm and sunny, unlike the rain that has greeted us on other days. I could almost believe it was summer.

Fascinating to see all these different approaches. I especially like the hedges at Veddw. How is that pronounced anyway?

The Welsh garden is pronounced Ved-dew. Over the years there have been many different spellings. To recognize this, there is a bench in the garden that gives these along with the dates when used. Very respectful of the past.