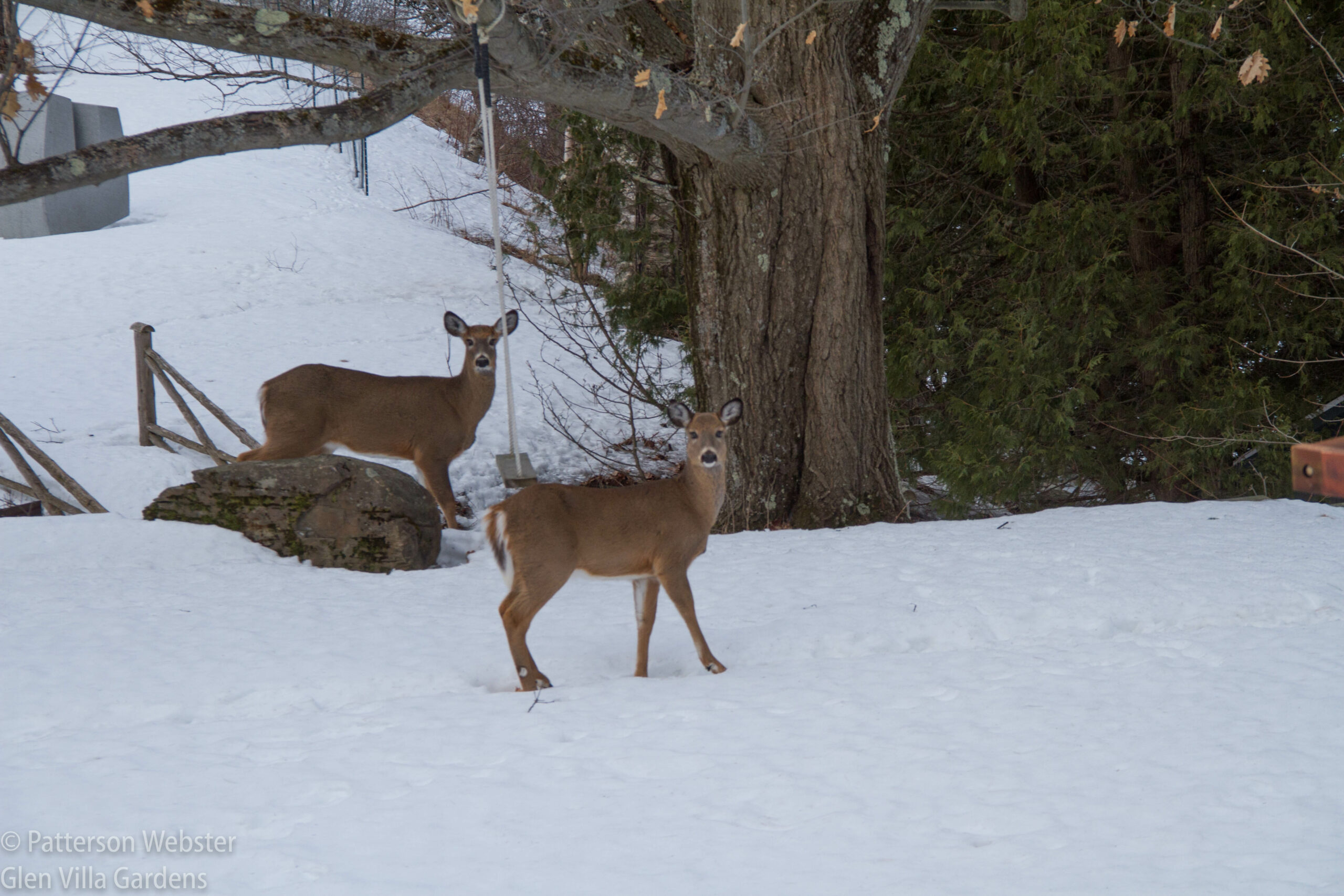 Long winters like the one we are experiencing this year in Quebec’s Eastern Townships make life difficult for animals.  Deep snow that persists for months makes it hard for deer to find food in the woods and as time passes they come closer and closer to barns and houses.

Yesterday I glanced out a window, disrupting two deer who were not far away, searching for something to eat. 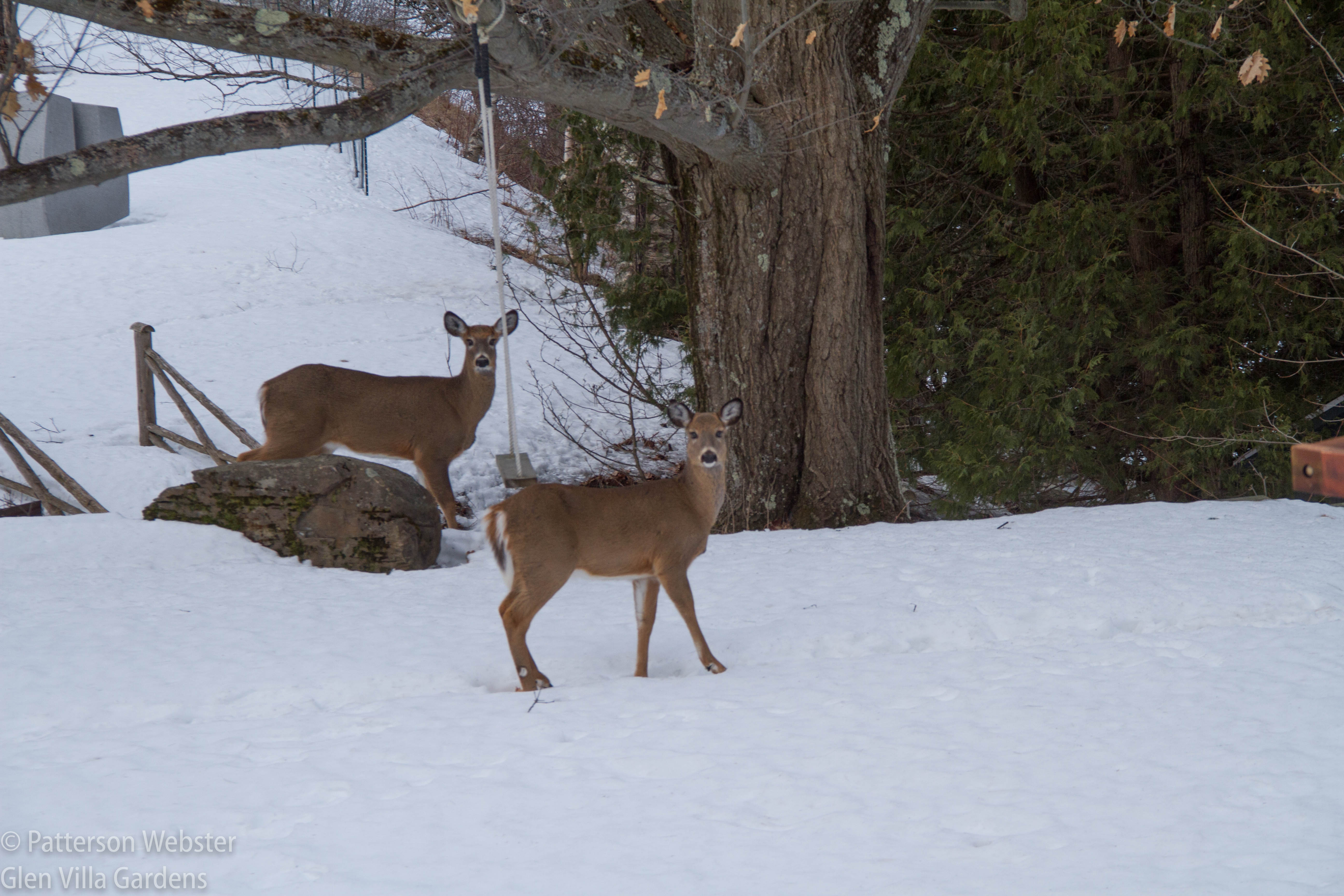 Here’s looking at you! 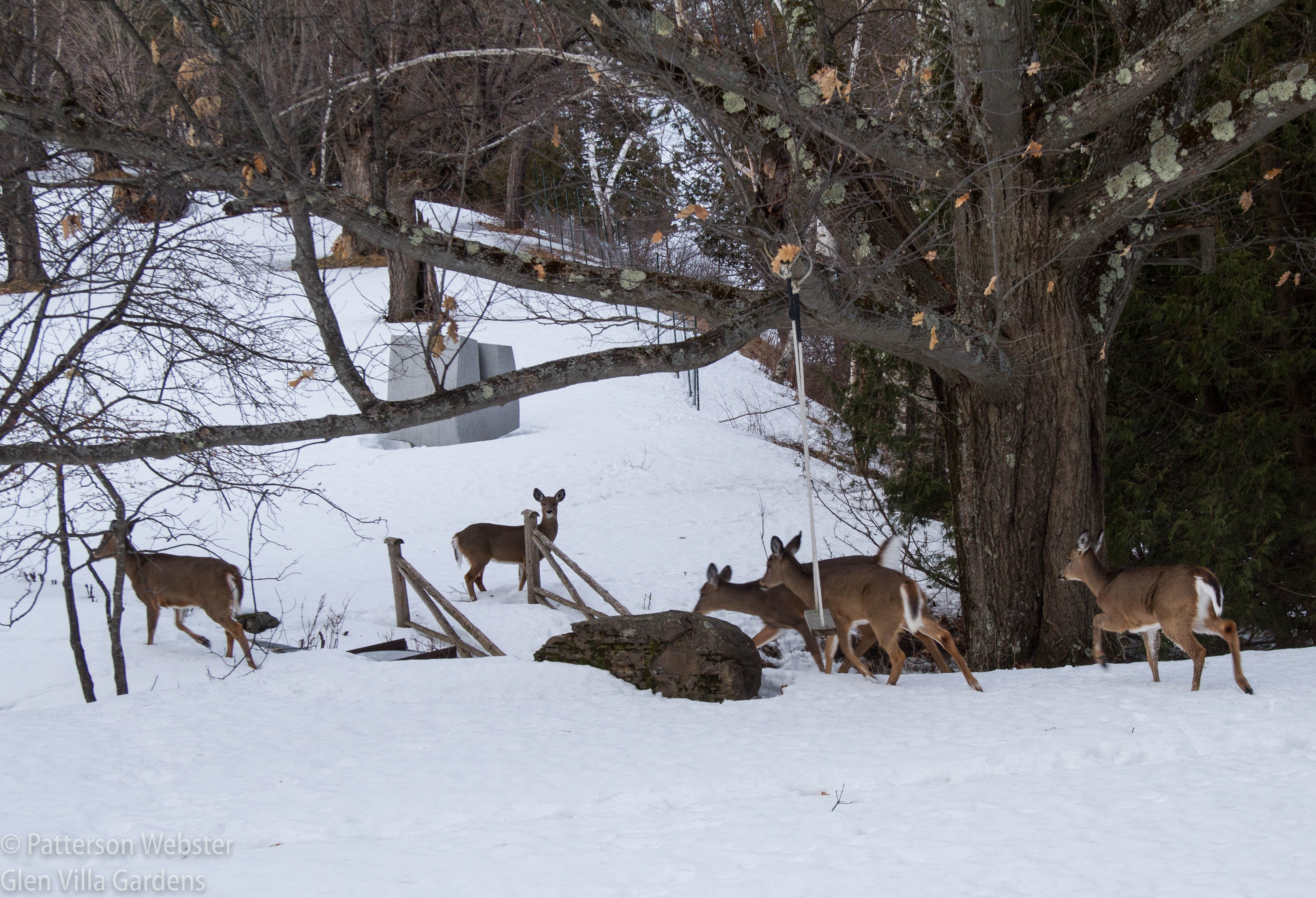 Is it party time?

I couldn’t get a definite count — the deer kept coming and going, in and out of view — but there were at least eight of them. As I watched, they lined up single file, as if they had decided to go for a walk along the bank of the lake. 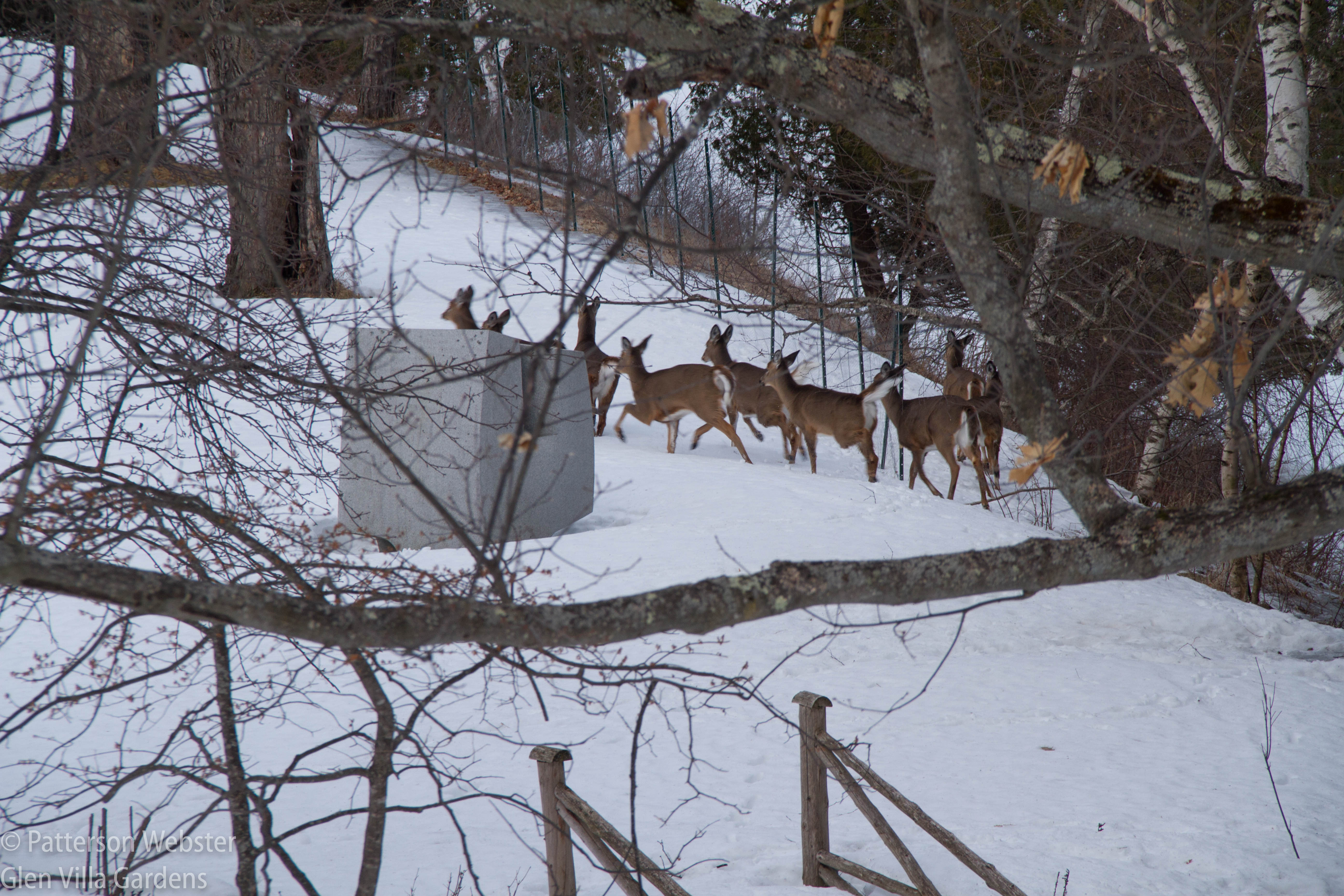 I count eight deer here. I think there were several more in the rear.

To get a closer look, I quietly opened the door and went out onto the deck. But of course, that startled the deer. They took off across the snow-covered ground. First three came into view, 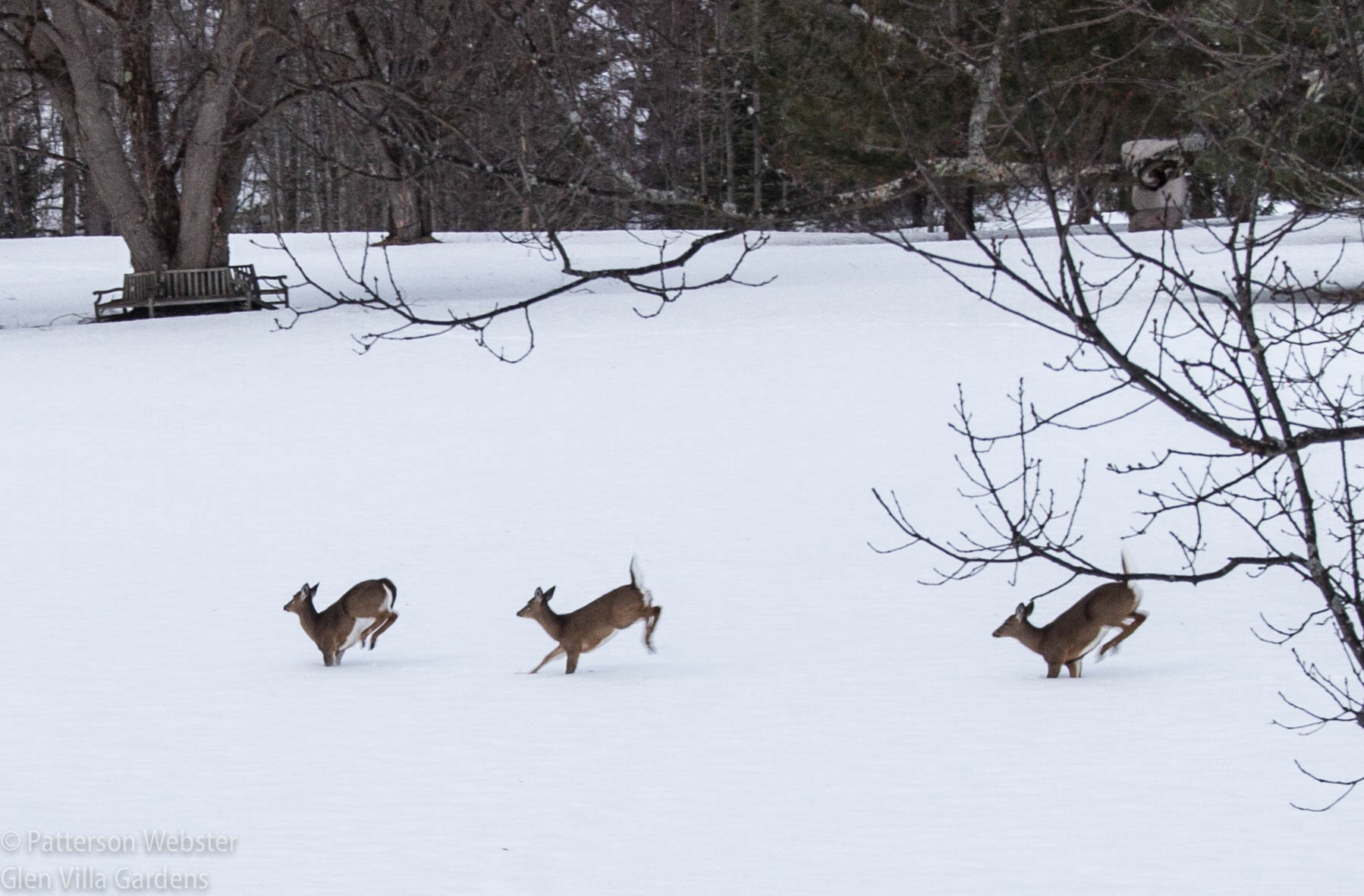 The deer are leaping across what used to be The Big Lawn and is now The Big Meadow. 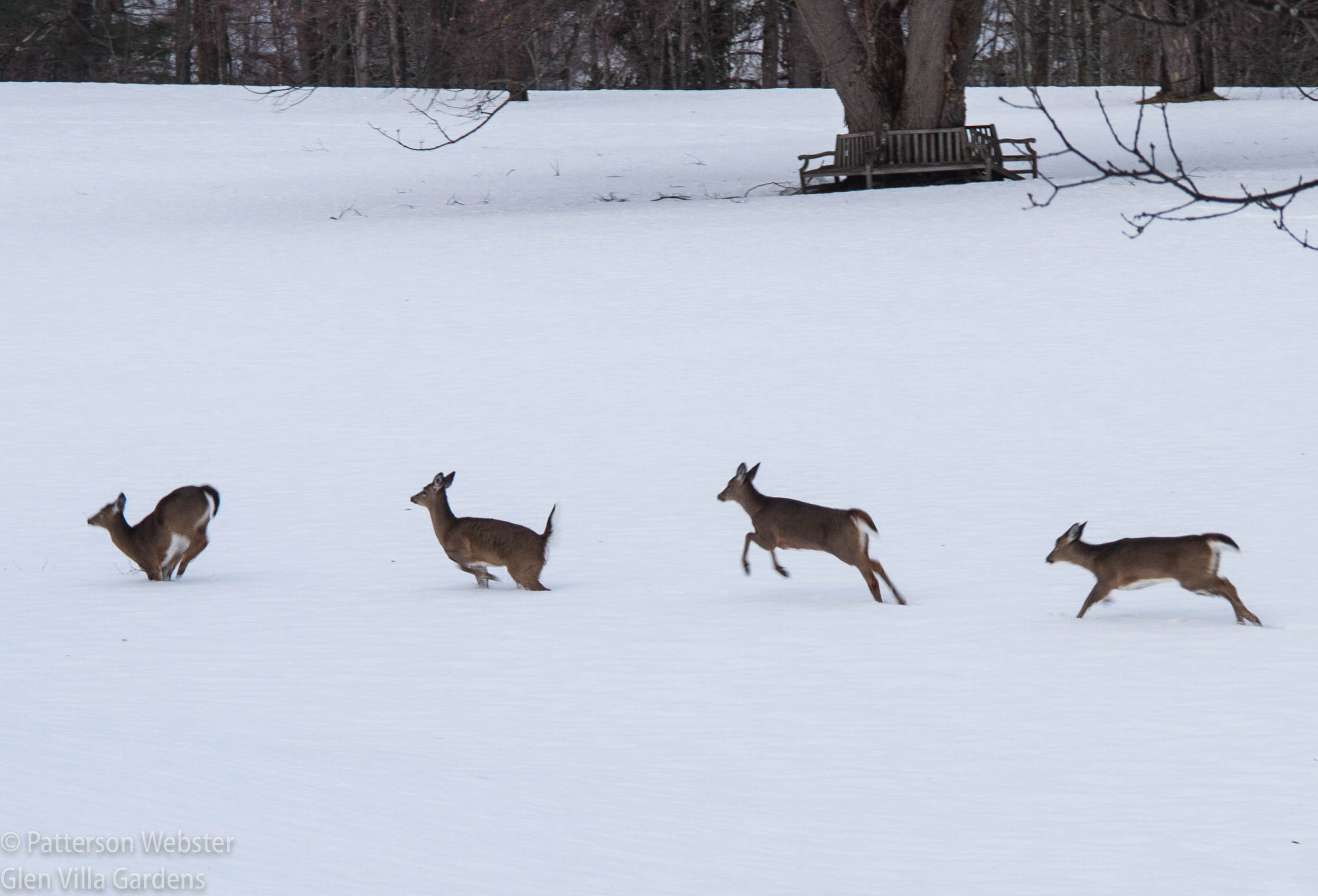 I think the deer in the lead looks more like a kangaroo than a deer. Do you agree? 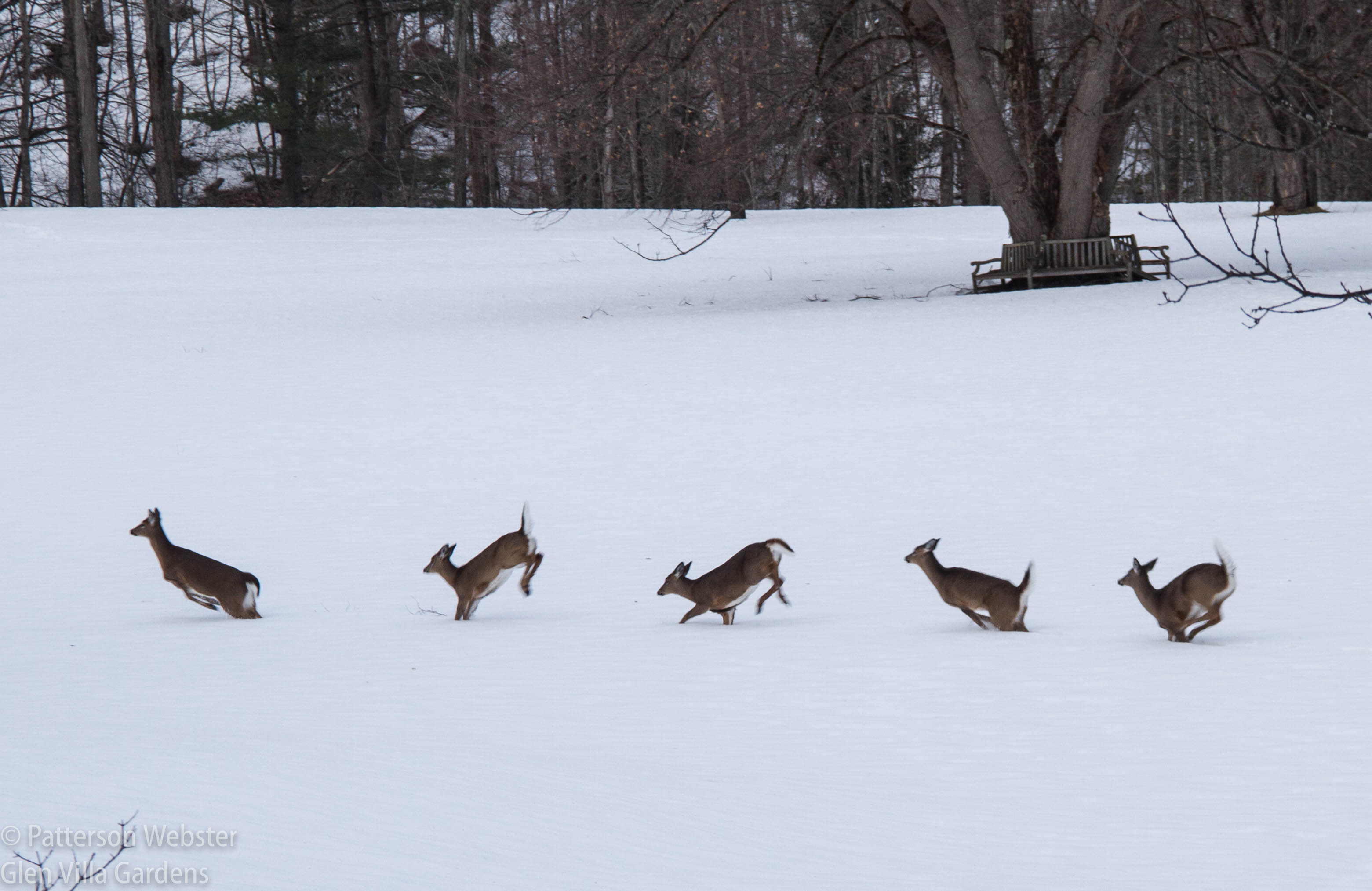 Noting how much of the deers’ legs are under snow gives you an idea of how deep the snow is.

Not all of the deer bounded away. One stood his ground, glaring at me, before going back to nuzzling his neighbour. The others just stared, as if asking me why I was still standing there, invading their space.

A friend once called deer rats with long legs. She may be right. In summer, they are a real pest, nibbling and sometimes destroying all my favourite plants. But seeing them run and leap through the snow, I couldn’t help but admire their agility and grace. And acknowledge that they live here, too.

You are So-o-o right.

I like them best on the far side of our fences…..

If only I could fence our property… just not possible.

I would have taken video if I’d thought to make the switch soon enough. But once they started jumping, all I could do was keep pressing the button!

Those are wonderful photos. They can be thrilling to see, but I’m very grateful that there are NO DEER in our neighborhood.

Wish I could say the same. (And congratulations to you and Judy on the wedding. I’m sure it was a wonderful event.)

Great pics! I startled a few deer in my garden this morning, but no snow to picturesquely bound through. penick.net

A deer faced me down on the driveway yesterday. I actually had to honk my horn to get him moving. Or her. (But I’m betting it was a him.)

This is the time of year when I most often sustain deer damage in my garden, as very hungry deer can’t afford to be fussy about what they eat. Time to put out the protective netting over the woodland-edge serenity garden, to protect shrubs and newly emerging perennials.

At any time of year deer seem to prefer the food I offer (unwillingly) to what is available in the woods. Wish they had the courtesy to leave my plants alone!