You are here:
Miscellaneous 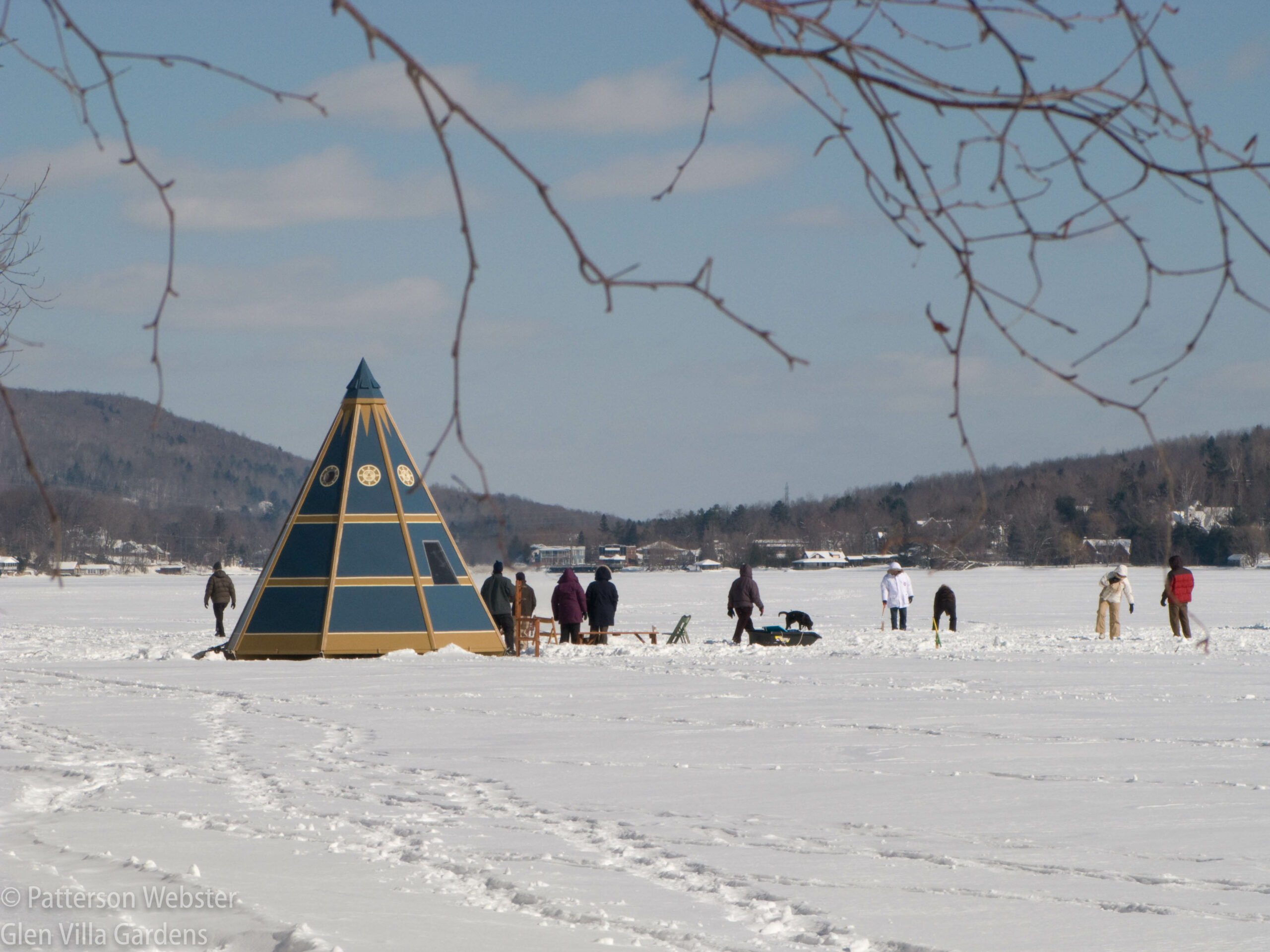 Yesterday the temperature in Quebec’s Eastern Townships was hovering just above freezing. The sky was brilliant blue and the sun glinting off clean, fresh snow brought out dozens of people, walking and talking — and fishing through the ice.

We live next door to Manoir Hovey, an outstanding resort hotel and a member of the prestigious international group, Relais et Chateaux.  I didn’t have my camera with me yesterday to photograph the fun, but luckily I have photos that I took at Manoir Hovey in 2008 that show a similar scene. Dozens came out that weekend to try their hand at ice fishing and to warm up in the yurt the hotel had erected for the occasion. 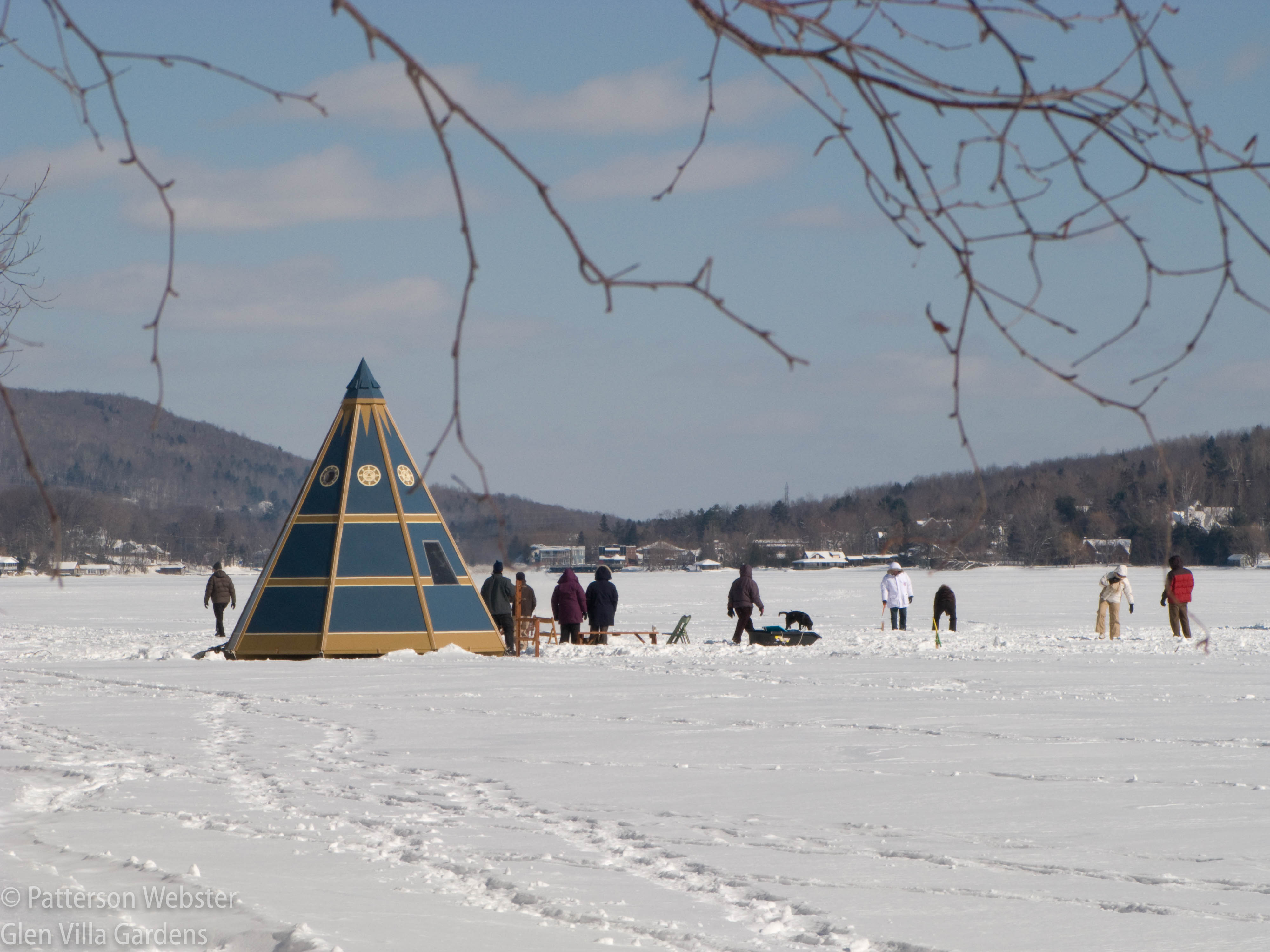 Ice fishing doesn’t change. What happened in 2008 — and probably a century before then — still happens today.

For those who didn’t want to warm up inside the yurt there was a fire burning on the frozen lake. 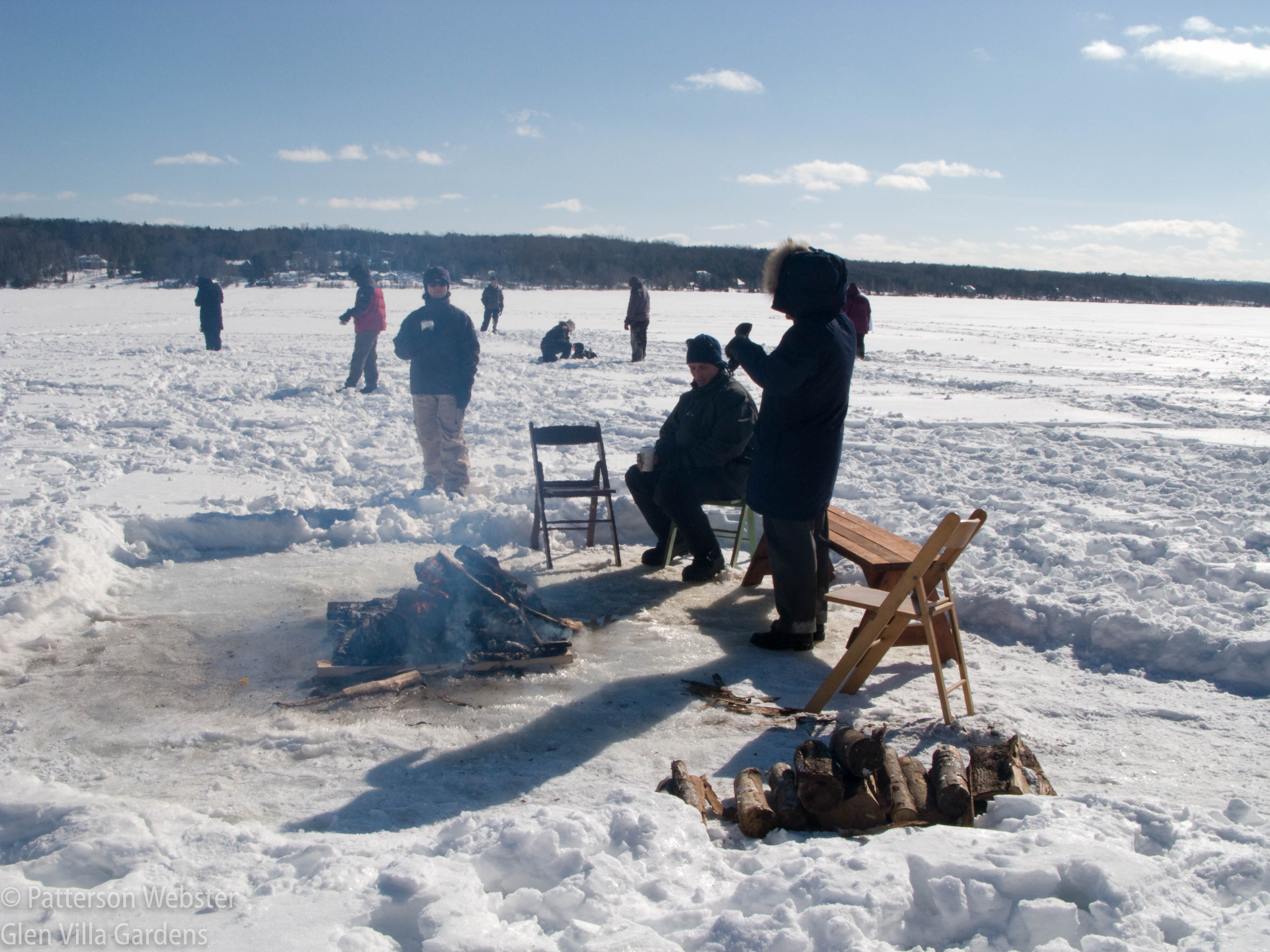 The fire was slightly raised above the ice. Even directly on the surface it would have taken a long time and a lot to heat to melt through the ice — in most winters the ice is at least a foot thick.

Not far from the festivities, a lone ice fisherman was using his long-handled augur to drill a hole through the ice. Beside him was a bucket for his catch — trout and perch are the most common, I believe — and for his fishing equipment and any food or drink he may have brought with him. 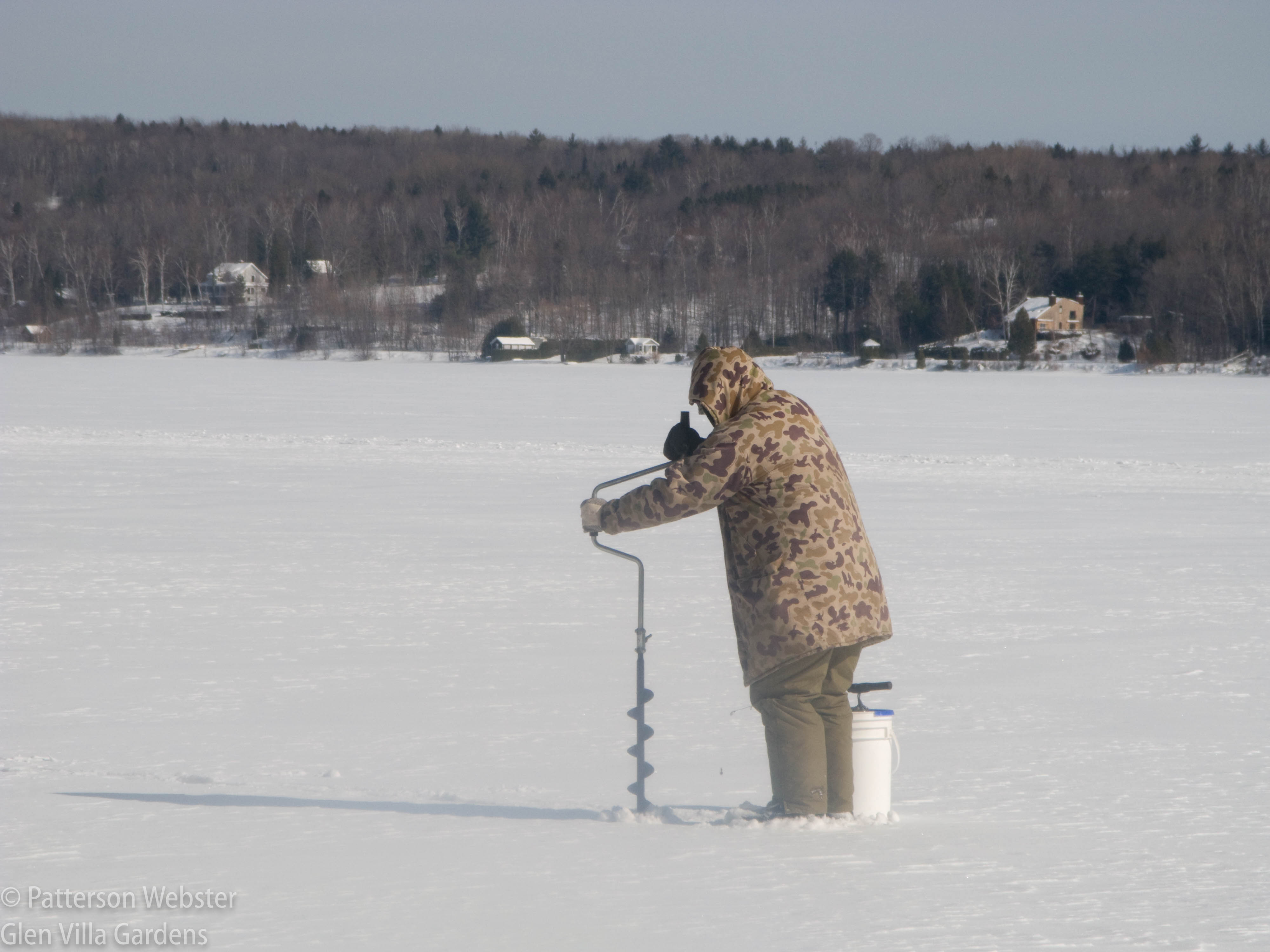 Ice fishing is usually a solitary activity. And a cold one — see how well this fisherman is bundled up.

Regardless of the year, fishing in winter doesn’t change. After drilling through to open water, the fisherman drops a baited line and sits down to wait. Fish can feel the vibration of voices and movement on the ice so the fisherman sits quietly and hopes no one disturbs him. When the line jiggles, he knows he has caught something. Sometimes this happens quickly, sometimes it takes 30 minutes or more, and there is no way of knowing in advance. 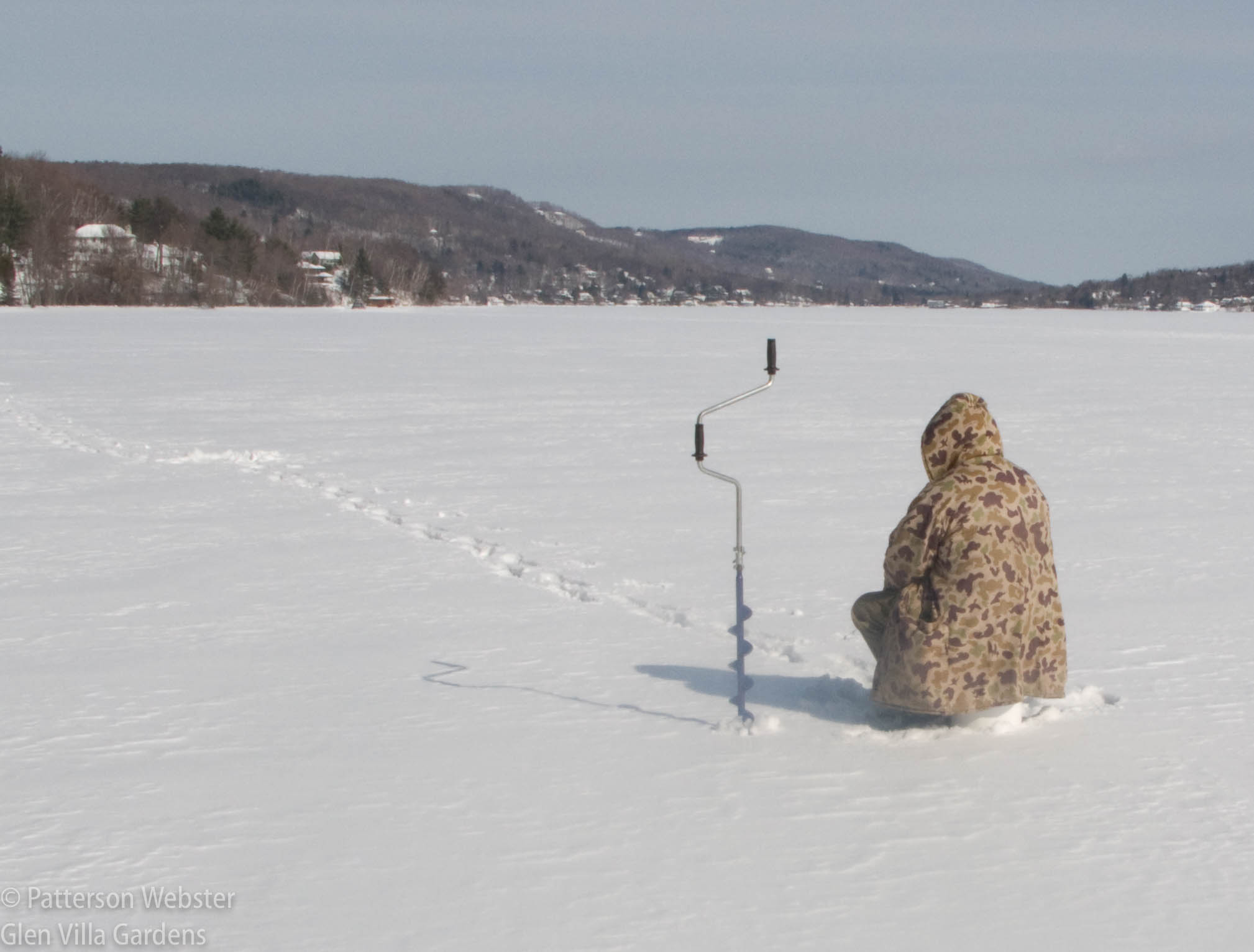 Ice fishing takes patience as well as a desire to be outdoors, alone, on a bright winter day.

Some fishermen rough it, some bring refreshments — a can or two of beer is standard. 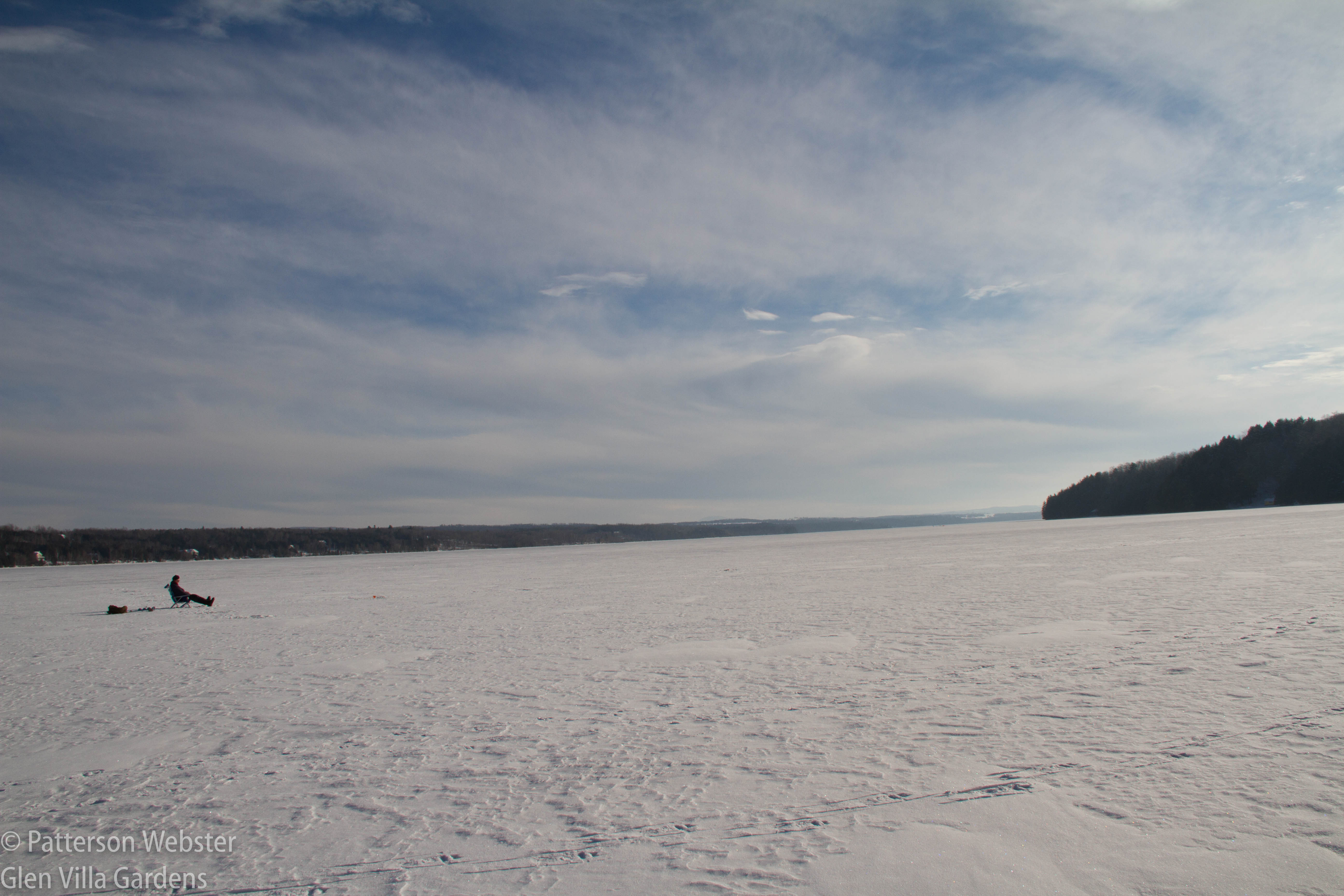 No cold seat for this fisherman — he brought a lounge chair.

Earlier this week, on a grey winter day, I saw the two people below fishing near the village of North Hatley where I live. 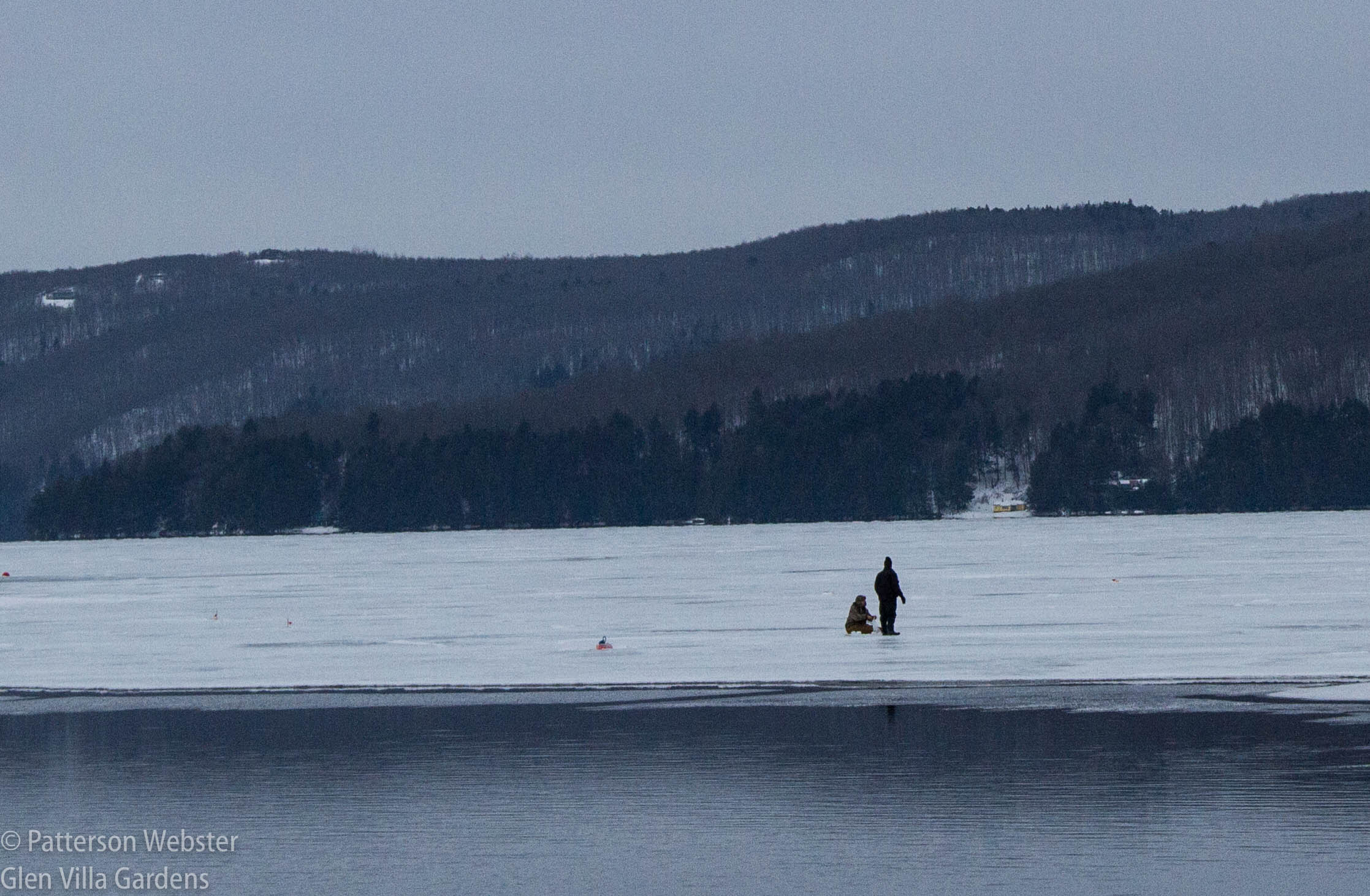 Two people brave the ice near the village on a grey winter day.

They seem to be dangerously close to open water day but they don’t seem worried.  I’m pretty sure I would be — and even surer that I wouldn’t be out there fishing in the first place.

What about you? Have you ever gone ice fishing? Did you enjoy the experience and would you do it again?

No, I never experienced it and never an auger around when you needed it!

I was just amazed to see the ice fishing village at Rimouski. These folks were committed. Personally, it didn’t look like fun to me, but I did cook some fresh smelts (one of their catches in that part of the St. Lawrence, apparently) –nice enough. Maybe I should have deep-fried them and eaten them as finger food, as traditionally prepared….

Deep friend smelts sound good but I’ve never tasted them. Something to look forward to, I suppose.

Smelts run in the Townships in May. They come over our waterfall and down the stream, in a stream. I’ve never tried to catch them or eat them, deep fried or otherwise.

They were actually a bit too full of bones for me! Supposedly the bones are edible (and softer) when deep-fried. Hmmm. I’m not adding them as a regular item to our rotation…I was just curious after reading about the traditional preparations and seeing them fresh in the market. Always interesting.

Yes, ice fishing is popular on the lakes of the upper Midwest. I consider it a form of temporary insanity.