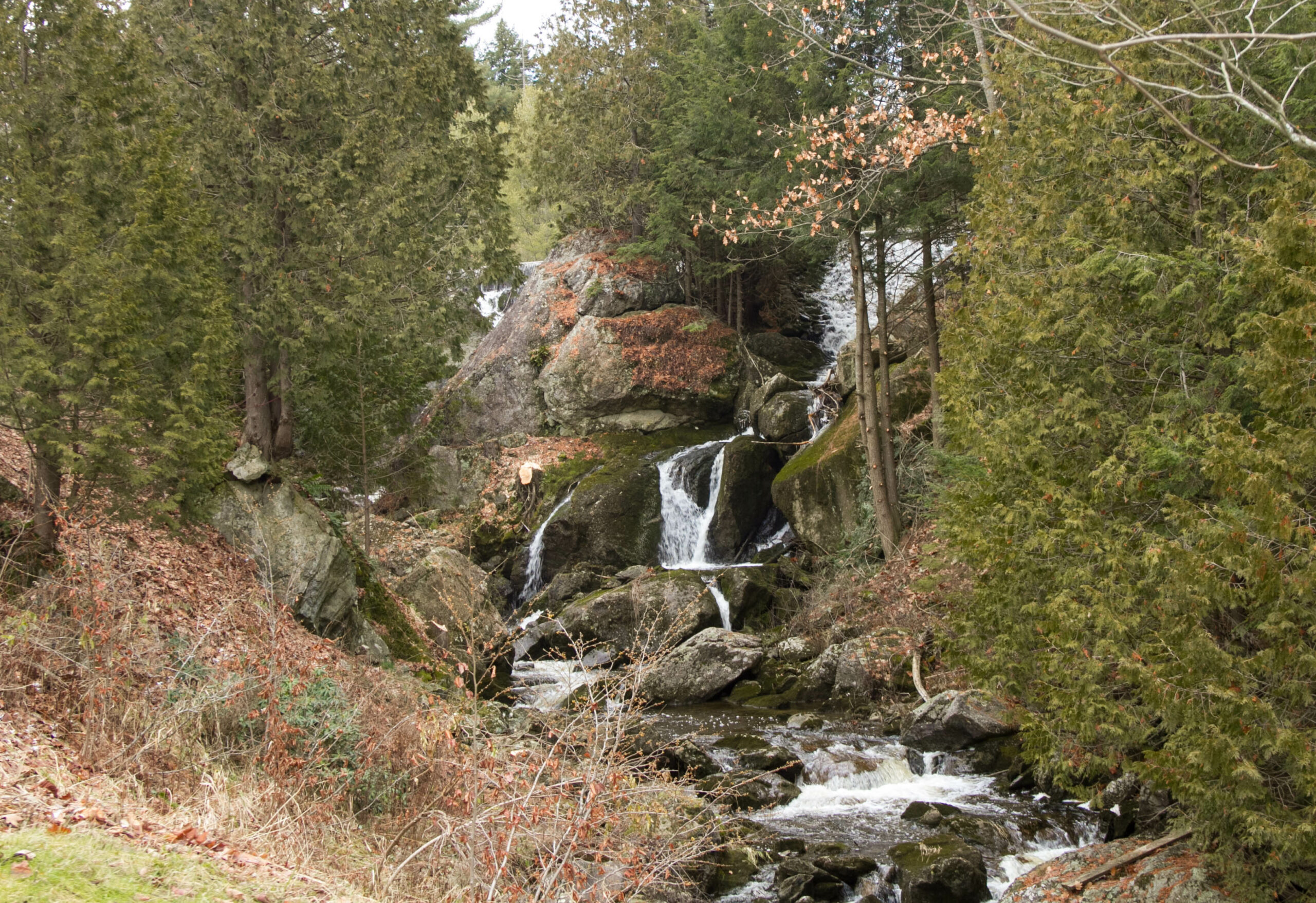 Making history visible on the land is the concept that guides the projects I undertake at Glen Villa, my landscape and garden in Quebec. Recognizing and honouring what happened on the land before I came onto the scene is my way of hearing the voices of the past. It’s my way of listening to what the land has to say.

The land speaks in different voices from different times. Glacial erratics talk about the ice age. 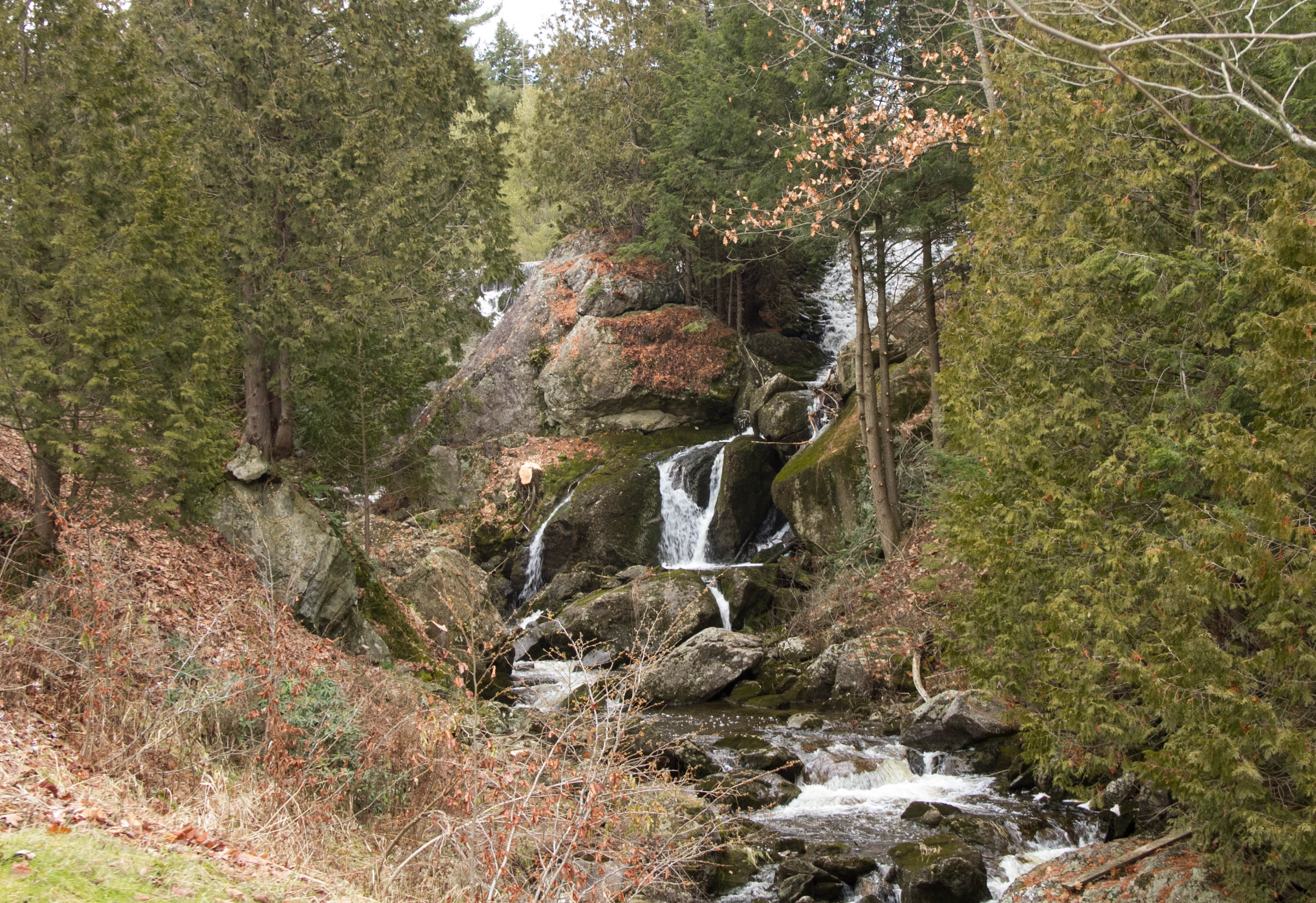 Glacial erratics form part of the waterfall at Glen Villa.

A wolf tree standing among younger oaks deliberately planted speaks of days when the old cherry tree was part of a different forest. 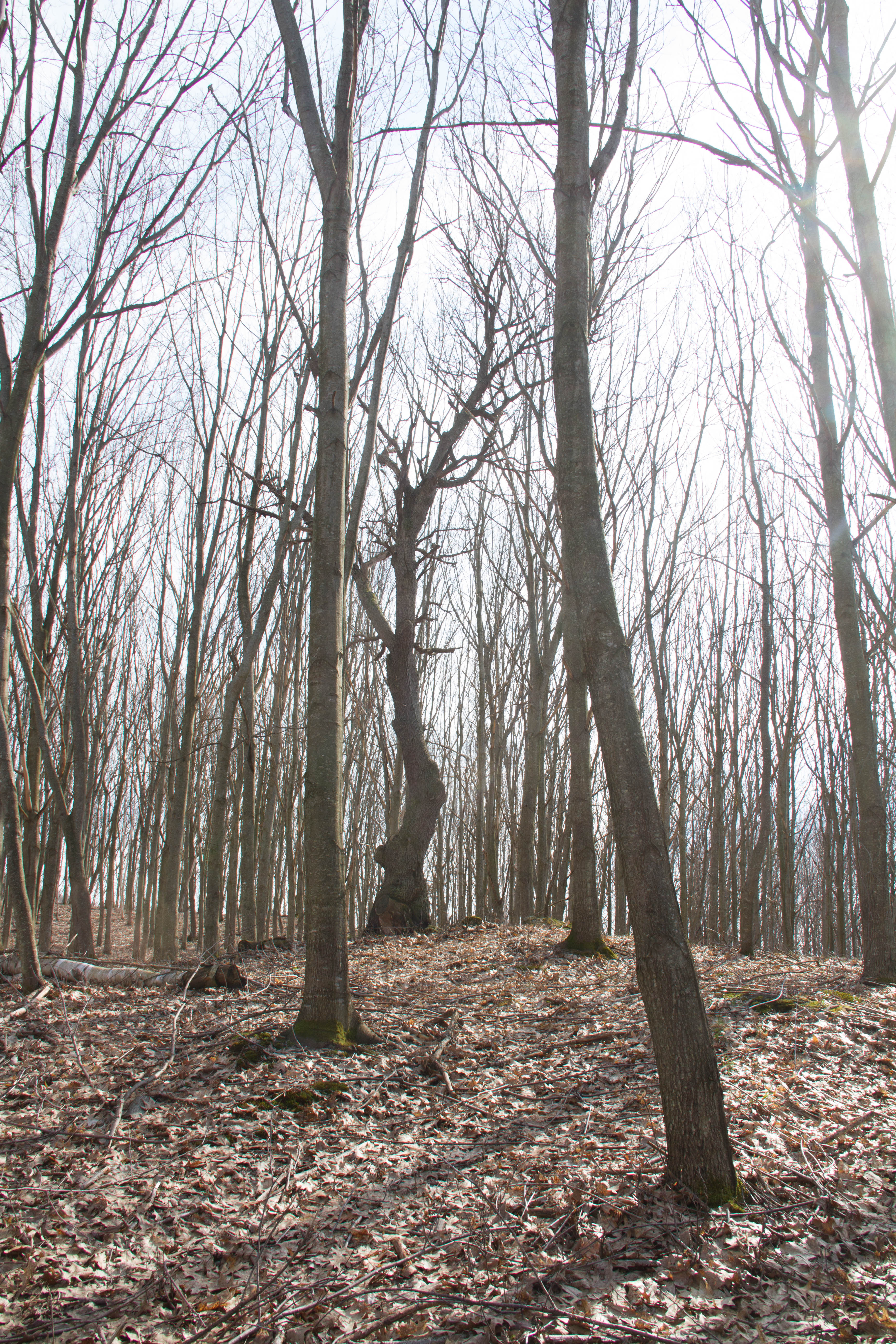 The twists and turns of the cherry tree show that it had to fight for the light in its younger days.

Signs of the past like these litter the landscape at Glen Villa. There are stone walls that once divided fields, and foundation walls of cottages long gone. 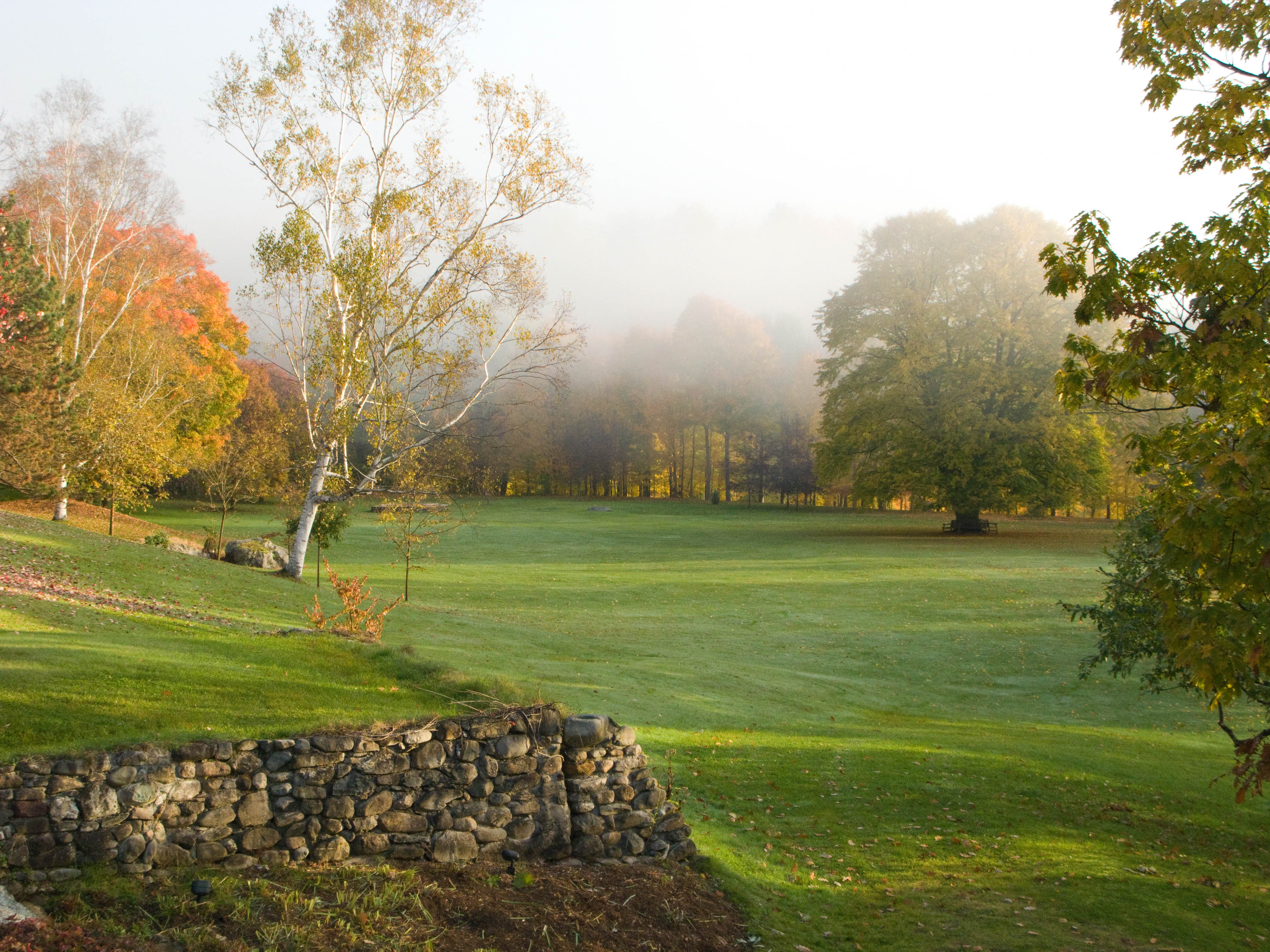 The stone wall in the foreground formed part of a summer cottage built around 1910 and torn down in the 1960s.

Largest and most impressive of the stone walls is the foundation of Glen Villa Inn, the large resort hotel that once stood on the property. 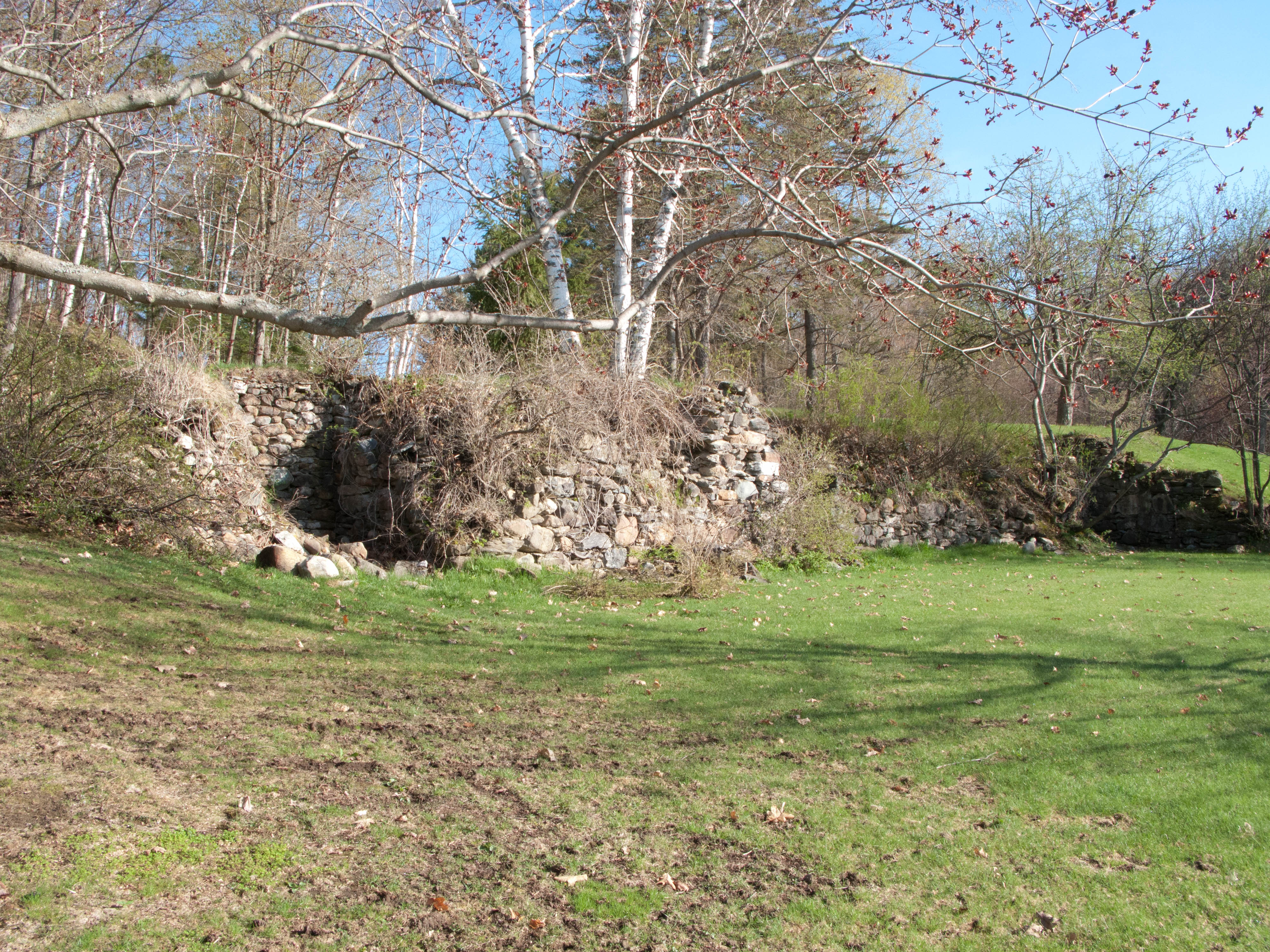 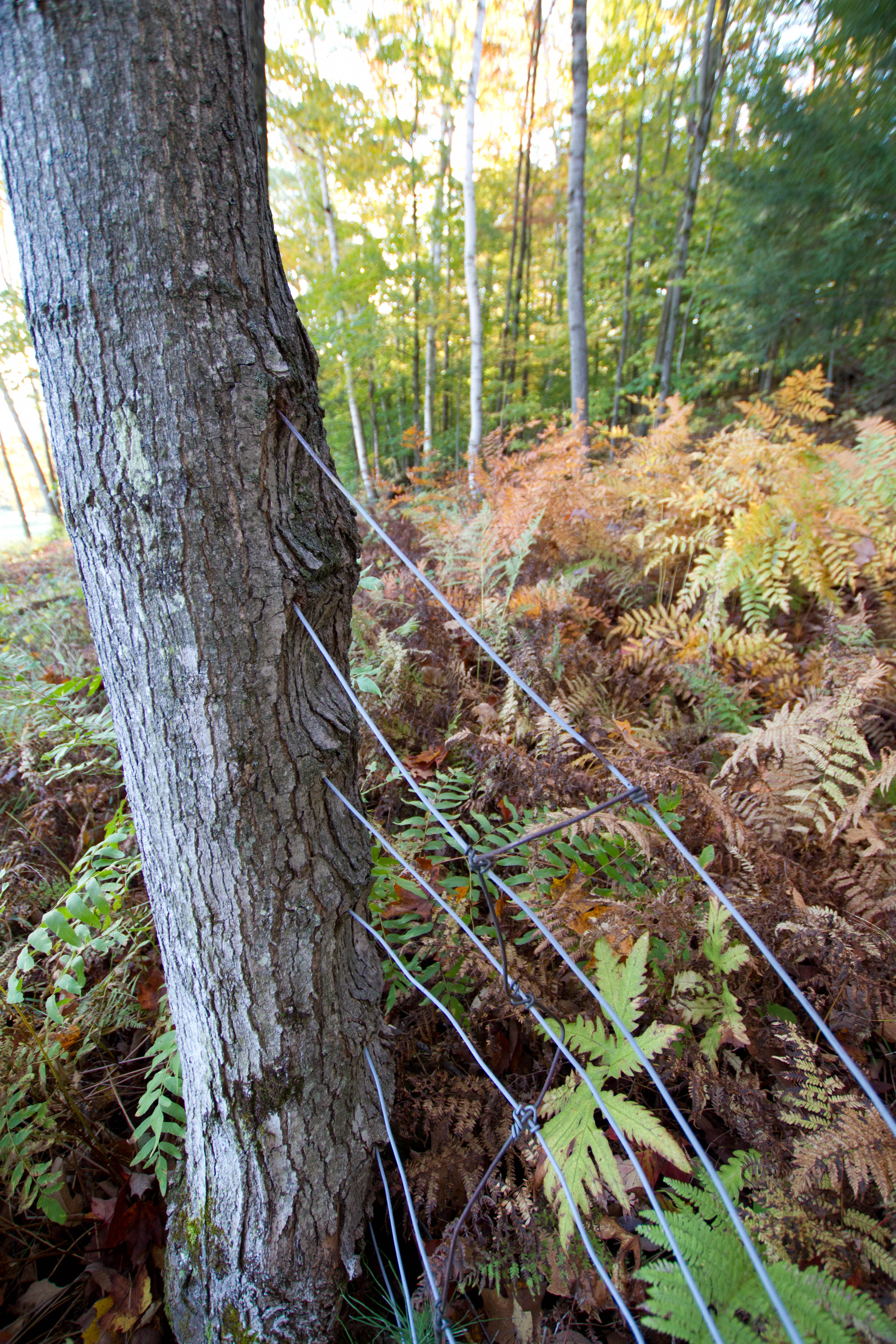 How many years did it take for the tree to grow around this piece of wire fencing?

… and in farm equipment abandoned in the woods. 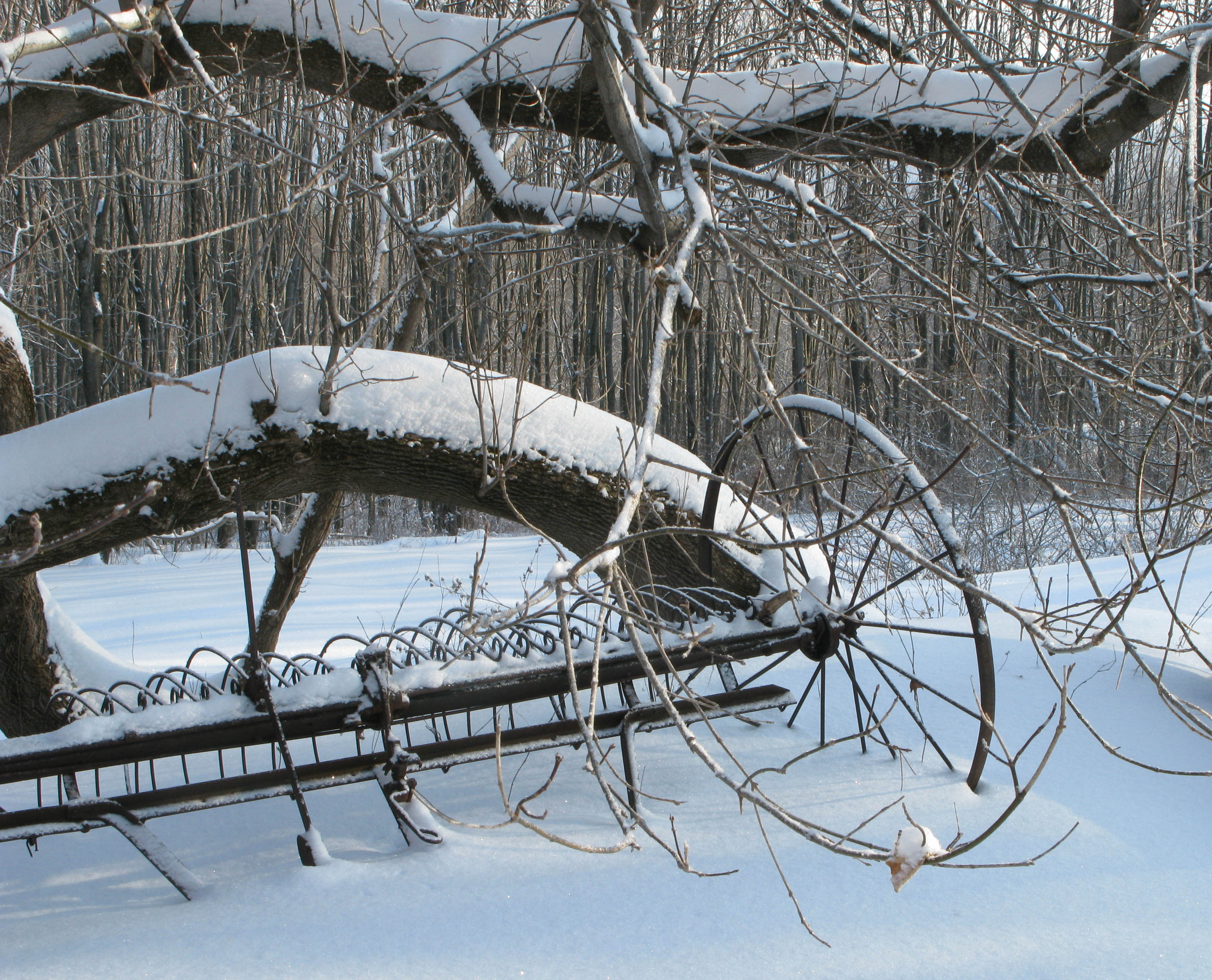 Someone more familiar with farm equipment than I am could probably name this piece. Is it a harrow?

People left their mark as well. Walking through the woods, I saw a tree growing on a huge moss-covered rock. To my eyes the tree resembled a man walking, and the image made me think of the Abenaki, the first people who had lived on the land.  Every time I passed the tree, it seemed to speak, telling me to make the Abenaki’s presence visible again.

I followed its bidding. The Abenaki believe that humans were created from the ash tree so I searched for ash trees in the woods that forked in special ways. Inverted, the branches resembled people walking, as for millennia the Abenaki had done, moving between their summer and winter camps. 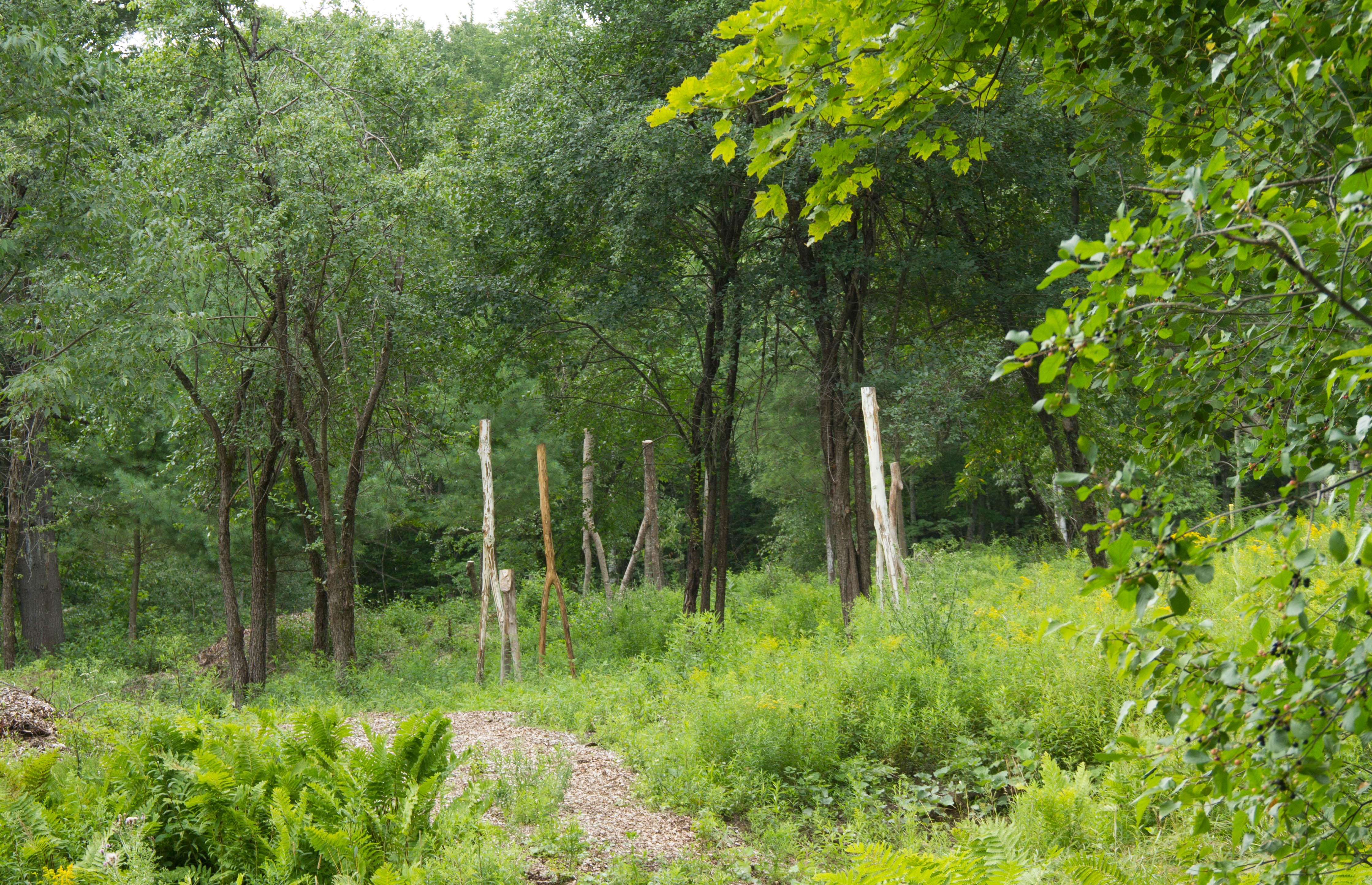 These Abenaki walkers are moving through a recently cleared field.

People’s debris told another story. I discovered pieces of china partly buried underground, and a mark on one piece confirmed what I had hoped — the burnt and broken pieces came from Glen Villa Inn, the old resort hotel. Finding a way to tell the hotel’s story took several years but eventually the china shards became part of the China Terrace, a re-creation of the hotel as it might have been in 1909 when it burned to the ground. 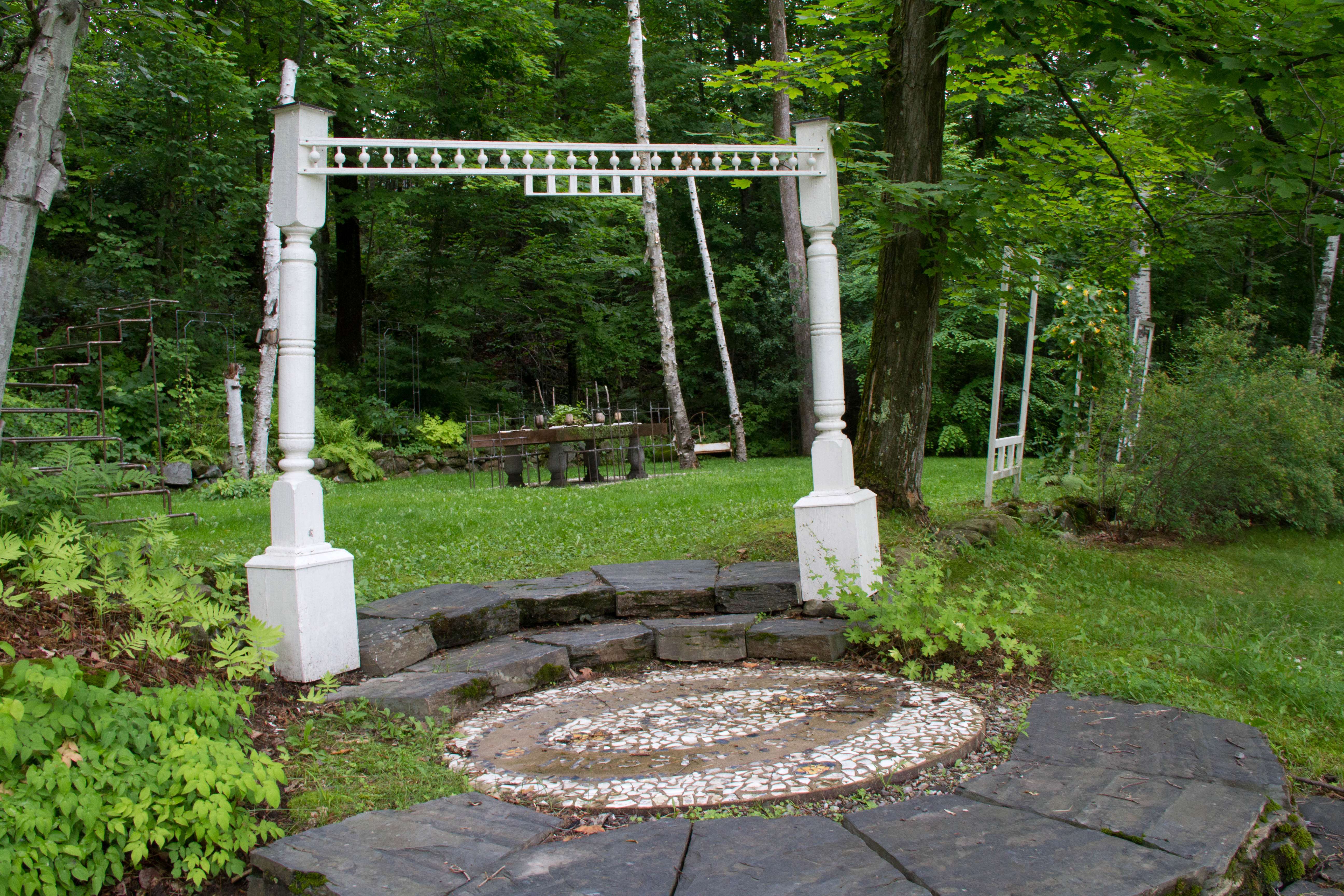 A welcome mat that incorporates pieces of broken china from the old resort hotel marks the entry to the China Terrace.

The more I explored the land, the clearer its voice became. In the woods, I came across a low stone wall, the remains of a building from the 1950s where maple sap had been transformed into maple syrup. This became Orin’s Sugarcamp, named to honour the farmer who worked there. 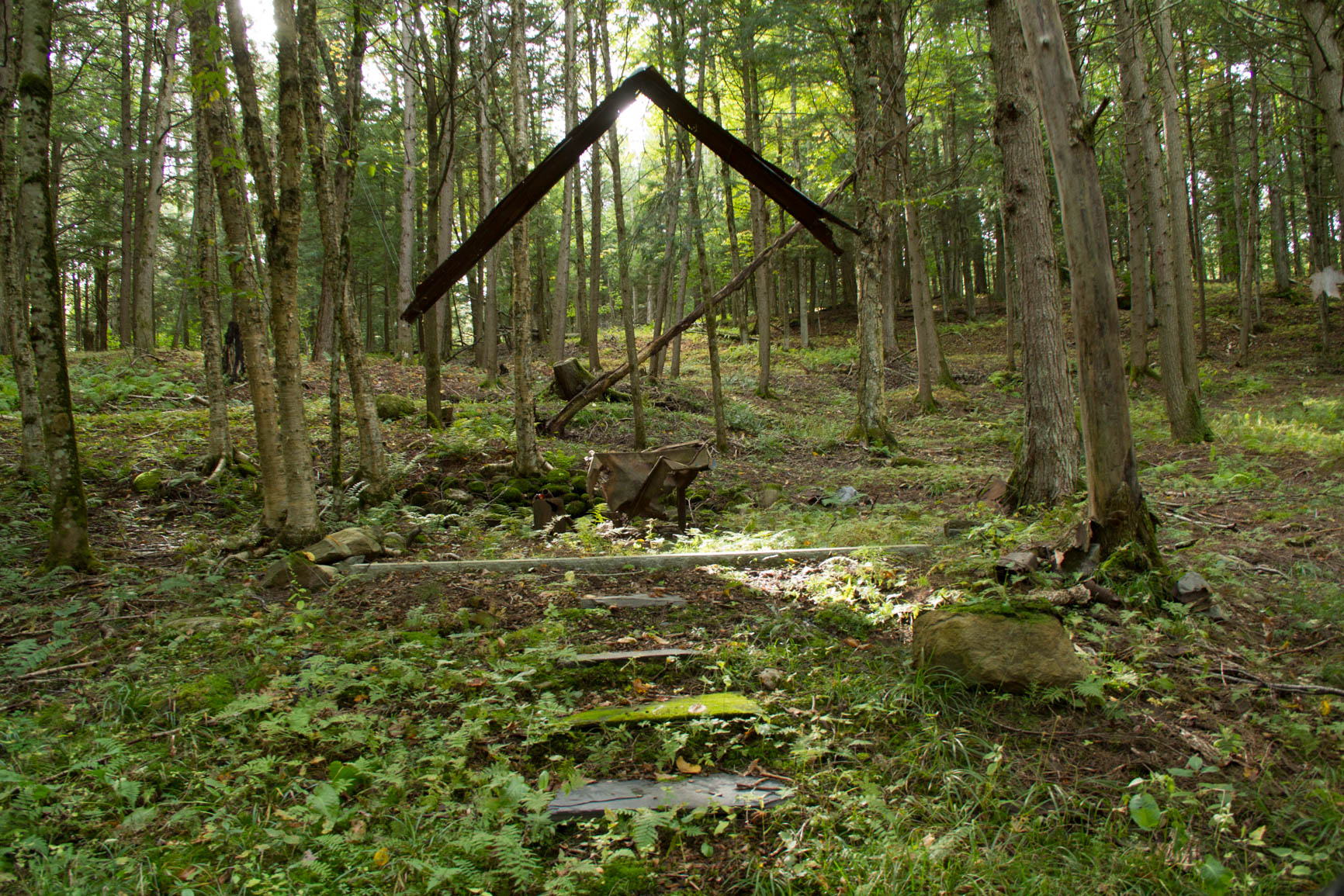 Surrounding Orin’s Sugarcamp are maple leaves made of tin, suspended from trees. They sway and tinkle in the wind, creating a magical environment.

A stone wall that stood in front of the old hotel became the yin yang, an Asian symbol that marked the years our family lived in China, during the Cultural Revolution. 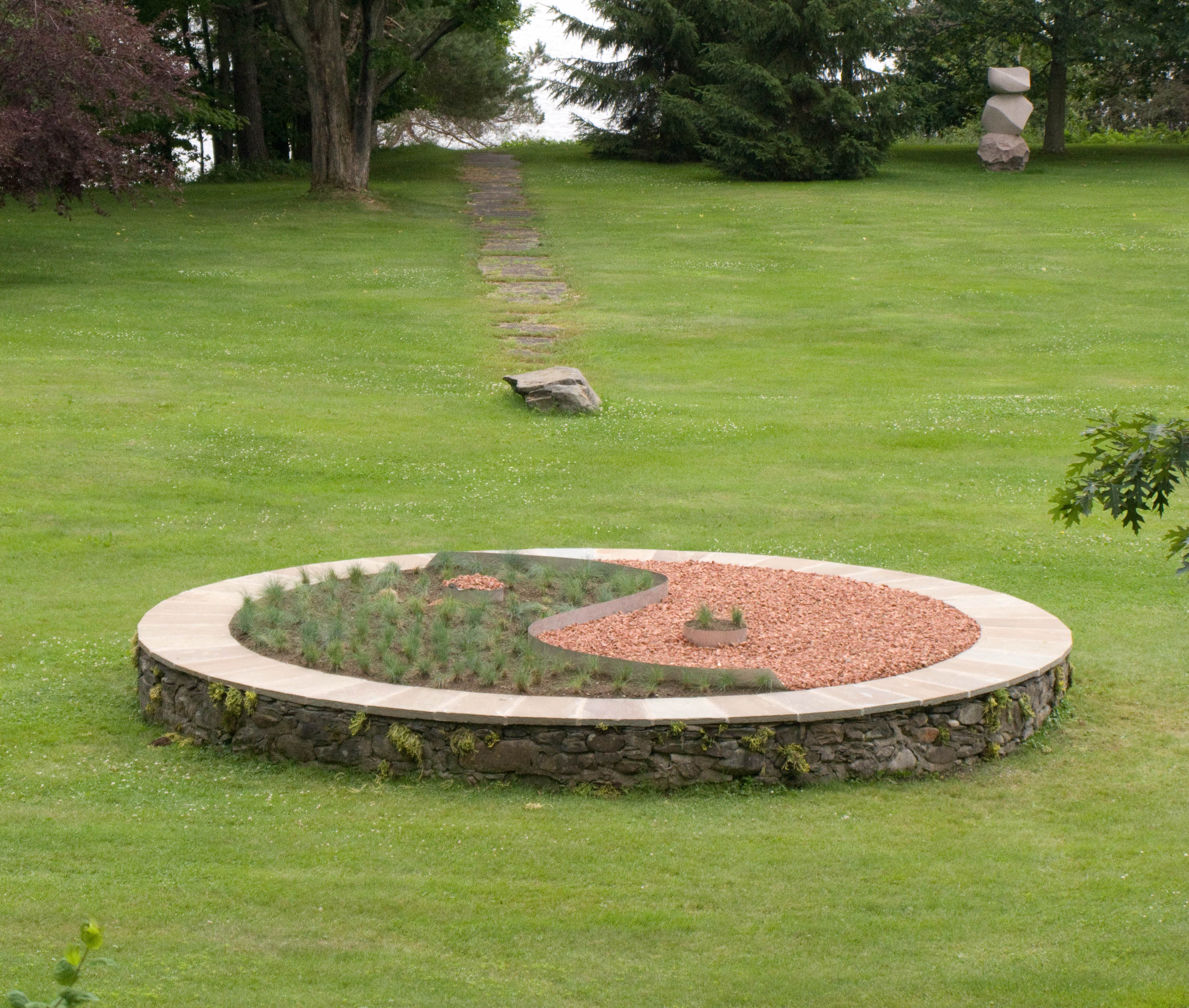 Over the years I’ve used different plants to show the oppositional elements of the Yin/Yang. The year I took this photo I used blue fescue (festuca glauca) and red brick mulch to contrast colour and material.

Deeper voices spoke of connections with a more distant past, when the Idea cast shadows on the wall and the oracle breathed fumes from a cleft in the ground. 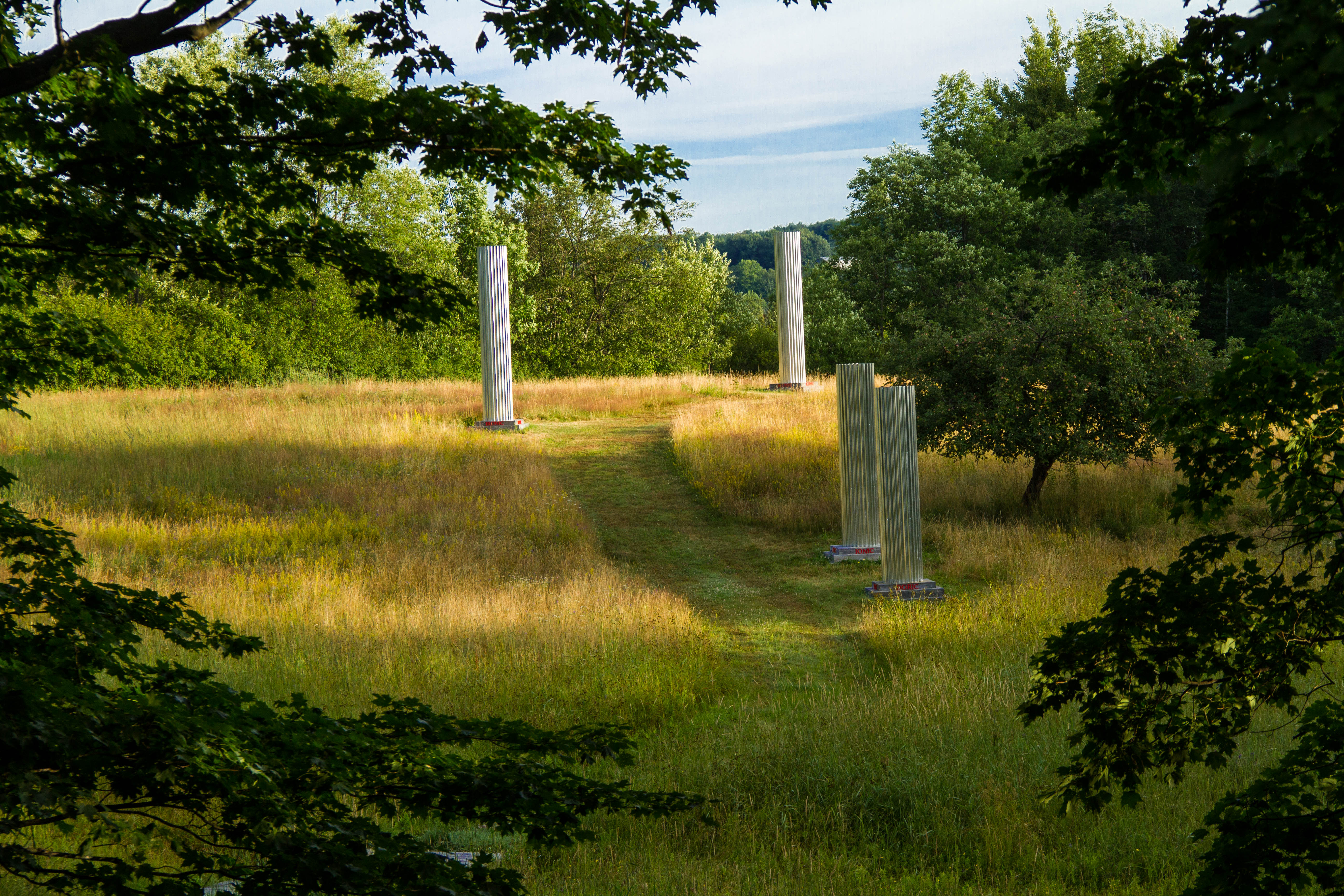 Columns of corrugated tin mark a path through a field. The contemporary material connects today’s world to ancient Greece.

The land continues to speak. I know it has stories still to tell, secrets it may share if I am quiet enough to hear. Listening takes patience, not an easy virtue. But if I  continue to listen, who knows what I will learn.