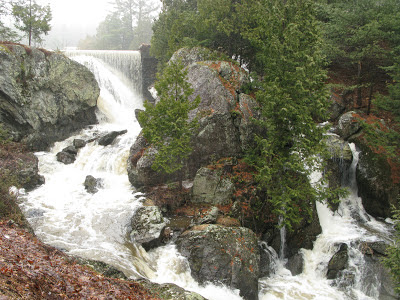 “Landscape is history made visible,” said J.B. Jackson, the American cultural geographer. I subscribe wholeheartedly to this idea.
Every piece of land has a history. Glen Villa has lots – in fact, you almost trip over it here. The waterfall, for instance, started life over a century ago, when a stream coming down through the woods was dammed to provide power for a sawmill.
Every gardener may not want to make history visible in their gardens, but this gardener does.  Making history visible is a big part of what Glen Villa is about  In part this is because I’m not from here. I’m an import, an immigrant to Canada, a refugee from the southern United States.
My husband grew up at Glen Villa, but I grew up in Richmond, Virginia. When we acquired the property in 1996 and started to remake the garden, I realized – so strongly that it shook me to the bones – that I wanted to incorporate my own past into the garden. I needed to make this place my own, and adding “me” to the garden seemed an obvious way to do it.
I started by considering the plants I’d grown up with, plants like magnolia, flowering dogwood, azaleas and rhododendron. Incorporating them into the garden may sound easy, but when you live where temperatures can drop to -35C (without wind chill!), it isn’t.

North Hatley, Quebec, is cold in winter. Temperatures drop regularly to -20C (or four degrees below zero in Fahrenheit, if you think F rather than C.) Temperatures don’t do that in Richmond, Virginia. So choosing familiar plants became a challenge. The magnolias I was familiar with, those evergreen ones with big leathery leaves, were out of the question. So was the dogwood that is Virginia’s state flower.

Revamping what we now call the Lower Garden meant removing the rose bushes (cookie cutter beds full of Peace roses that had to be sprayed regularly and replanted every year or two: definitely not my style) and digging up the one plant that was thriving in the rock garden, a perennial geranium that seemed set on conquering the world.
Luckily we uncovered some old pink peonies that reminded me of the ones that grew around my grandparents’ house in the Blue Ridge mountains of Virginia, and in the garden in Oakville, Ontario, where our children grew up. (Wish I could find a photo of those glorious peonies!)
With help from local experts, I discovered that magnolia stellata might survive, if we planted it in a sheltered spot. It didn’t merely survive — it thrived! The magnolia is almost 20 feet tall now and requires vigorous pruning every year. It blooms prodigiously, often twice a summer.
Over time, I’ve added more plants that aren’t meant to survive here. My big success is Jeffersonia diphylla. I’d never heard of the plant until I started reading good reference books. (Thank you, William Cullina.) But once I saw it, I had to have it. It’s a true Virginia plant, named after Thomas Jefferson. Somewhere at a nursery near Jefferson’s house, Monticello, I bought three plants. One died before it arrived at North Hatley. One died the first winter.
The third is still going strong, as happily acclimatized to Quebec now as I am.  At home.
Categories: Art, Glen VillaBy glenadminJanuary 30, 20131 Comment
Tags: blogflowershistory made visibleJ. B. Jacksonlower gardenwaterfall
Share this post
Share on FacebookShare on Facebook TweetShare on Twitter Pin itShare on Pinterest Share on LinkedInShare on LinkedIn

Wonderful Pat – I look forward to receiving these from you.