An assortment of photos shows the variety of what is happening now at Glen Villa, my garden in Quebec’s Eastern Townships. Flowers are blooming everywhere. One that I am particularly fond of is columbine. The native variety, Aquilegia canadensis, grows freely in many spots in the garden. In the photo below, it complements the colour palette of new growth on a spirea, Spirea ‘Magic Carpet,’ a shrub that the deer ignore. (Hooray!) 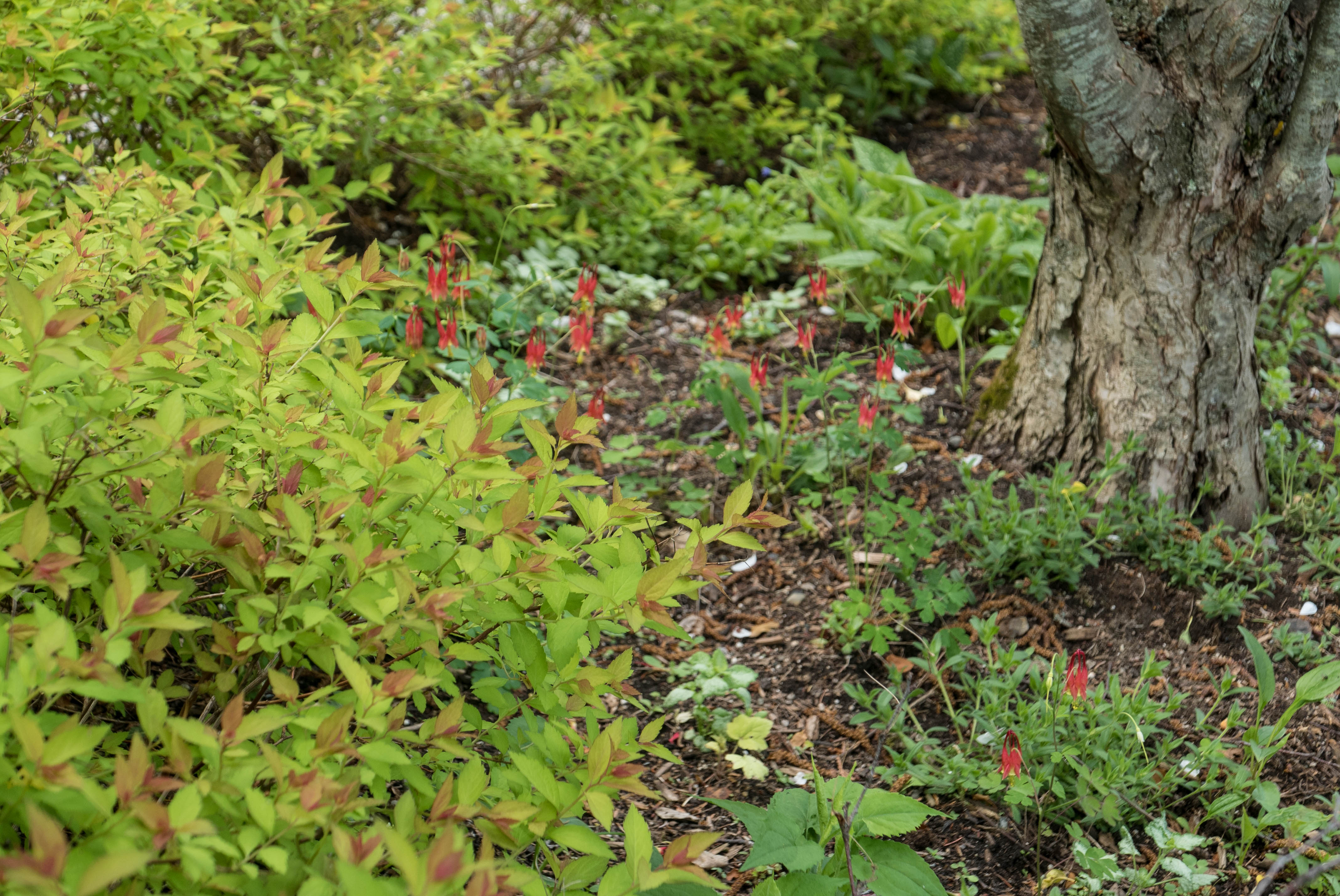 Years ago, I started various columbines from seed, including some seed I brought back from Australia. I think this deep blue one is from a B&B where we stayed and I’ve named it after that historic building, Purrembete. (Checking on-line, however, I find that it may be only the common columbine, Aquilegia vulgaris.) 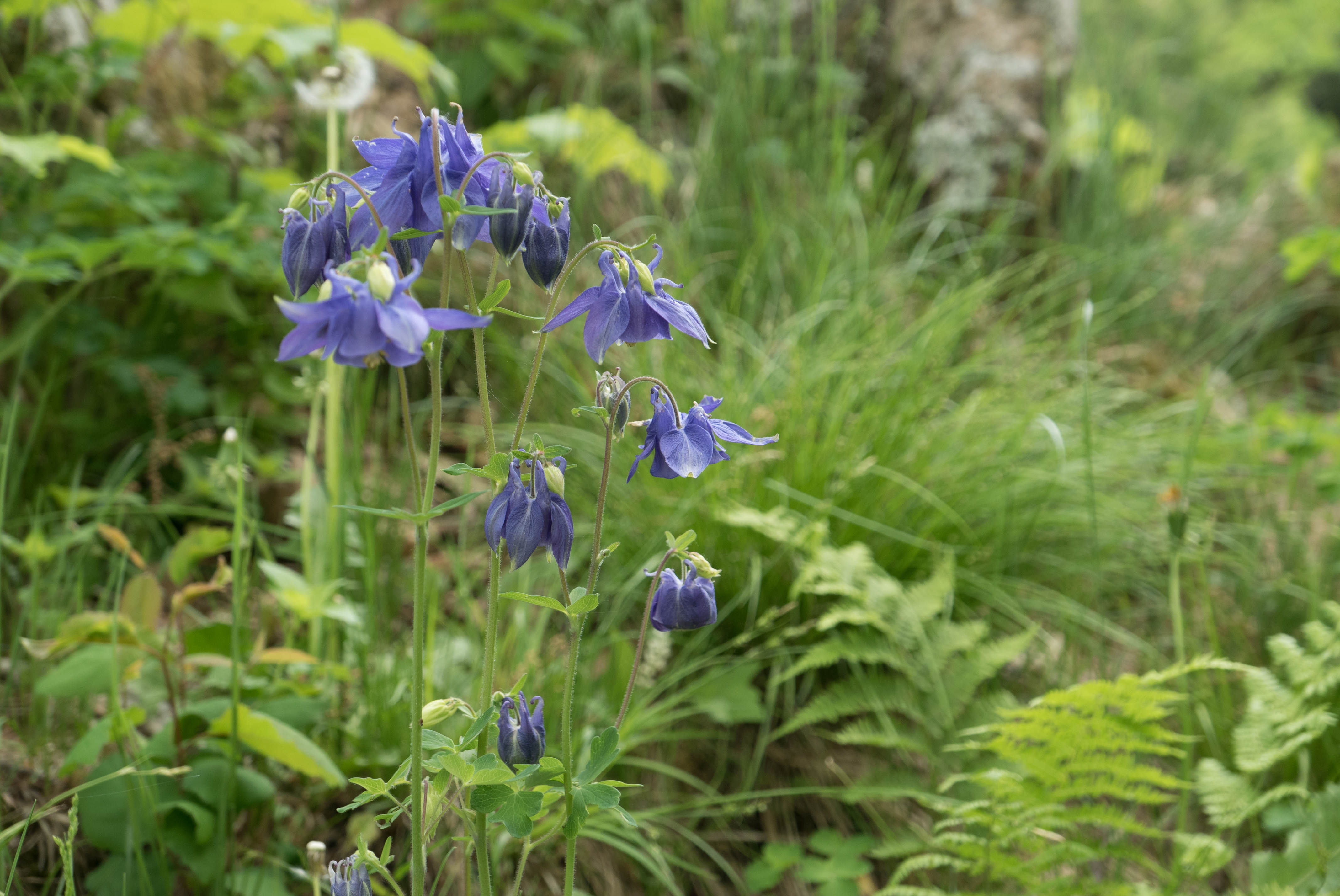 Wildflowers are also appearing. Lupins and ragged robin (Lychis flos-cuculi) cover the hillside above the driveway. 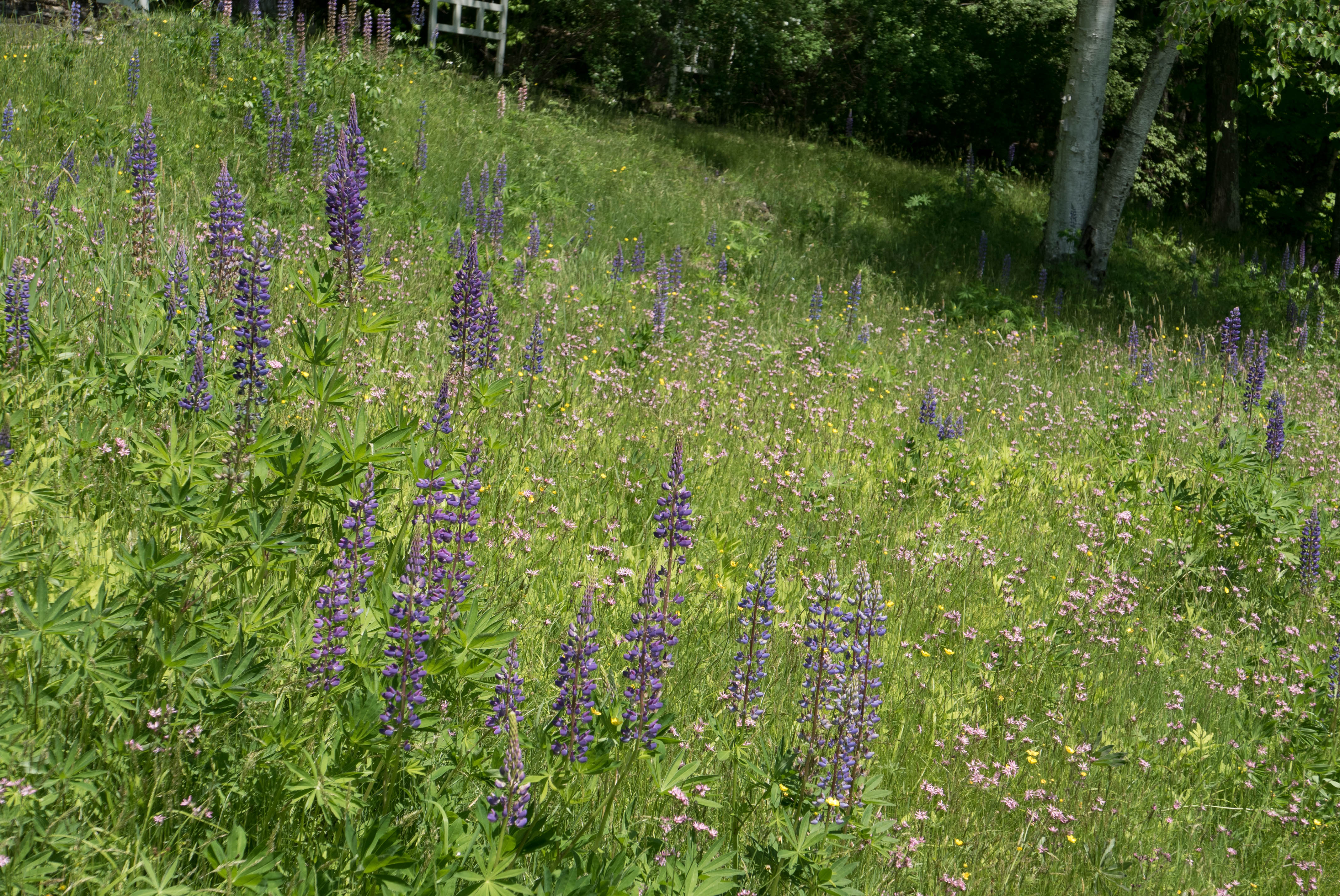 Wild strawberries are growing in abundance in parts of the Big Meadow.

The patch of red, or sheep, sorrel (Rumex acetosella) in the Big Meadow gets bigger every year, growing as it does on acidic, sandy soils. Sheep sorrel is considered a noxious weed and while it isn’t very attractive close up… 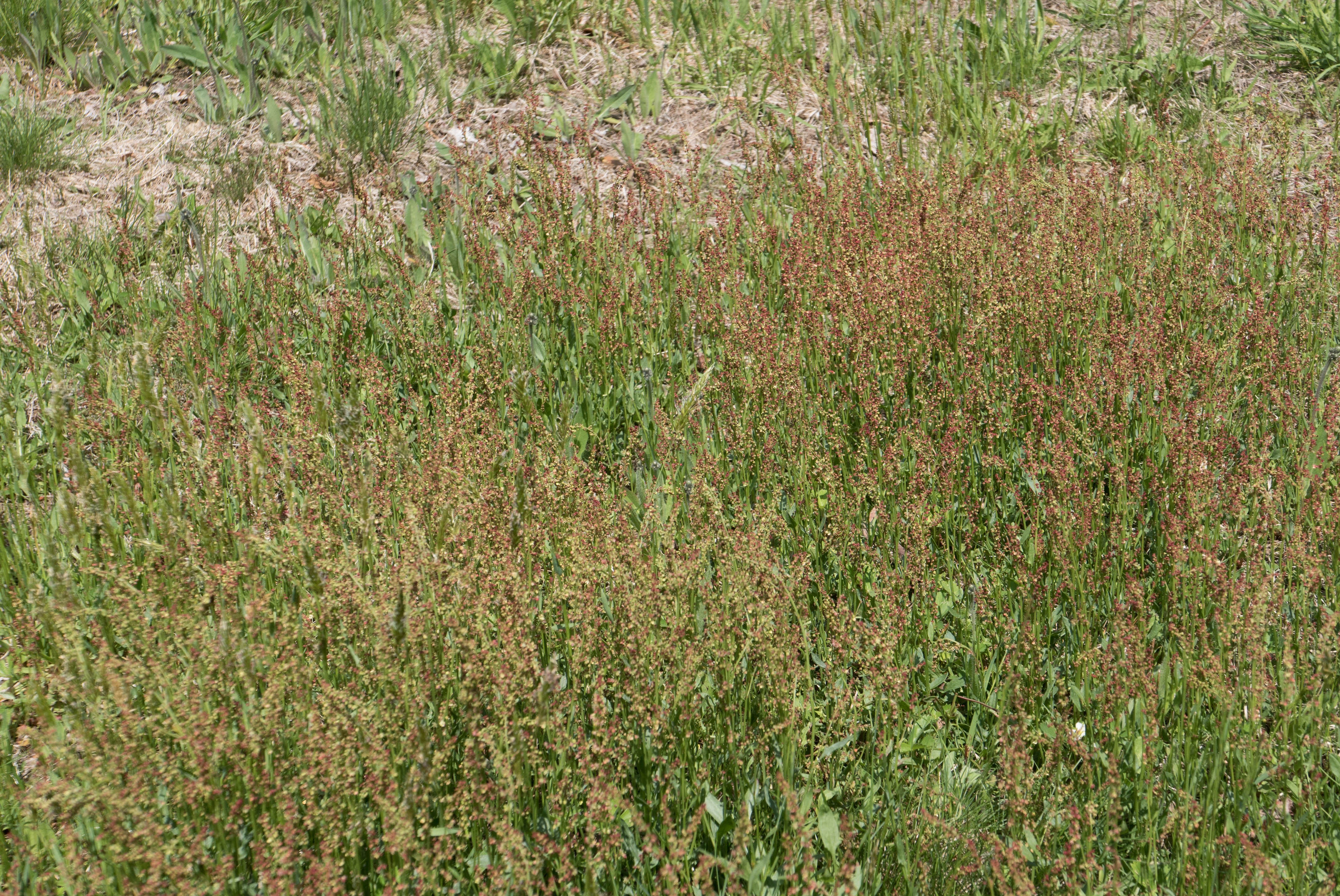 … it makes quite a show from a distance. 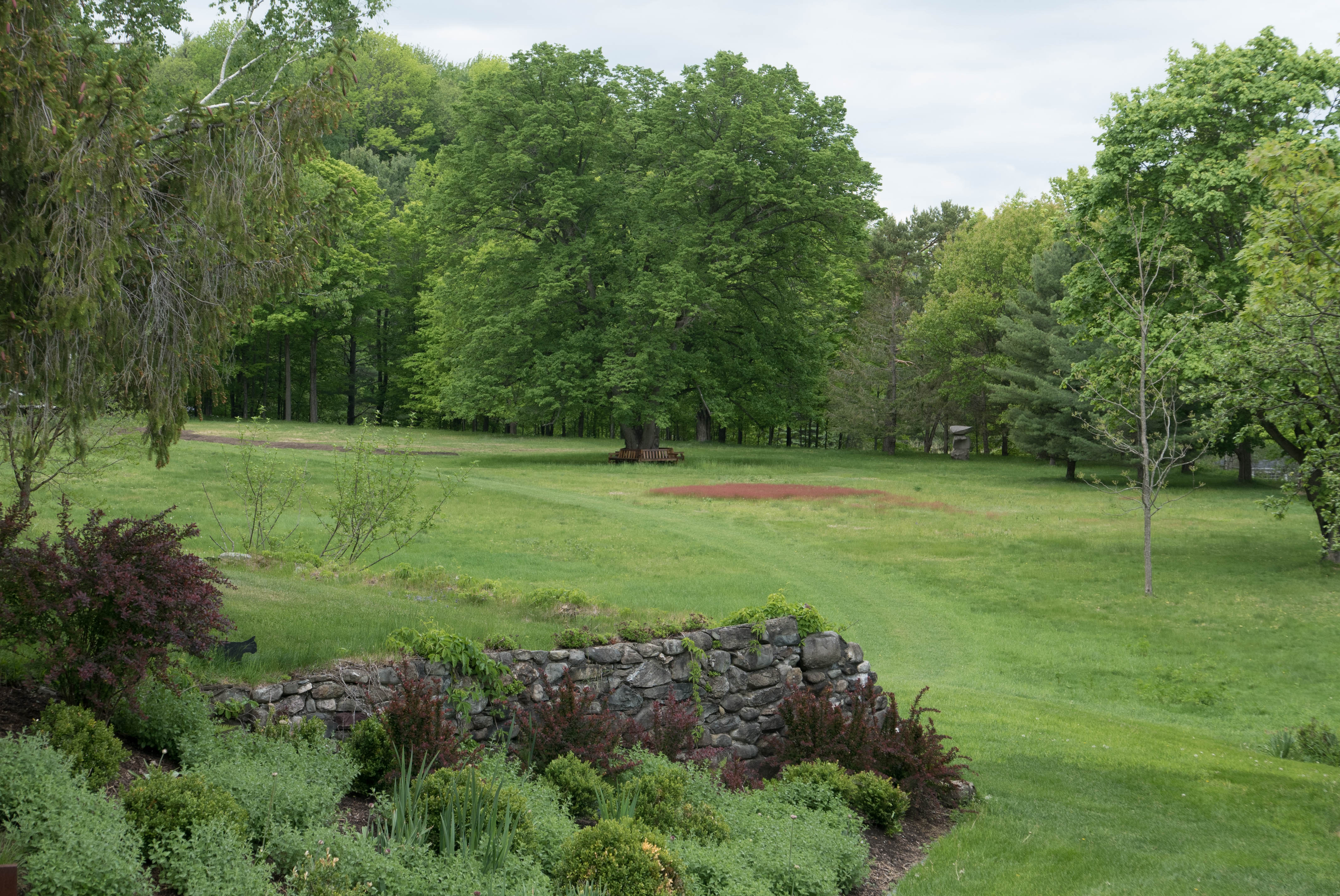 But the most beautiful wildflower at the moment is the blue-eyed grass (Sisyrinchium). It is in full bloom alongside La Grande Allée, and its abundance makes up for this year’s disappointing show from the crabapple trees. 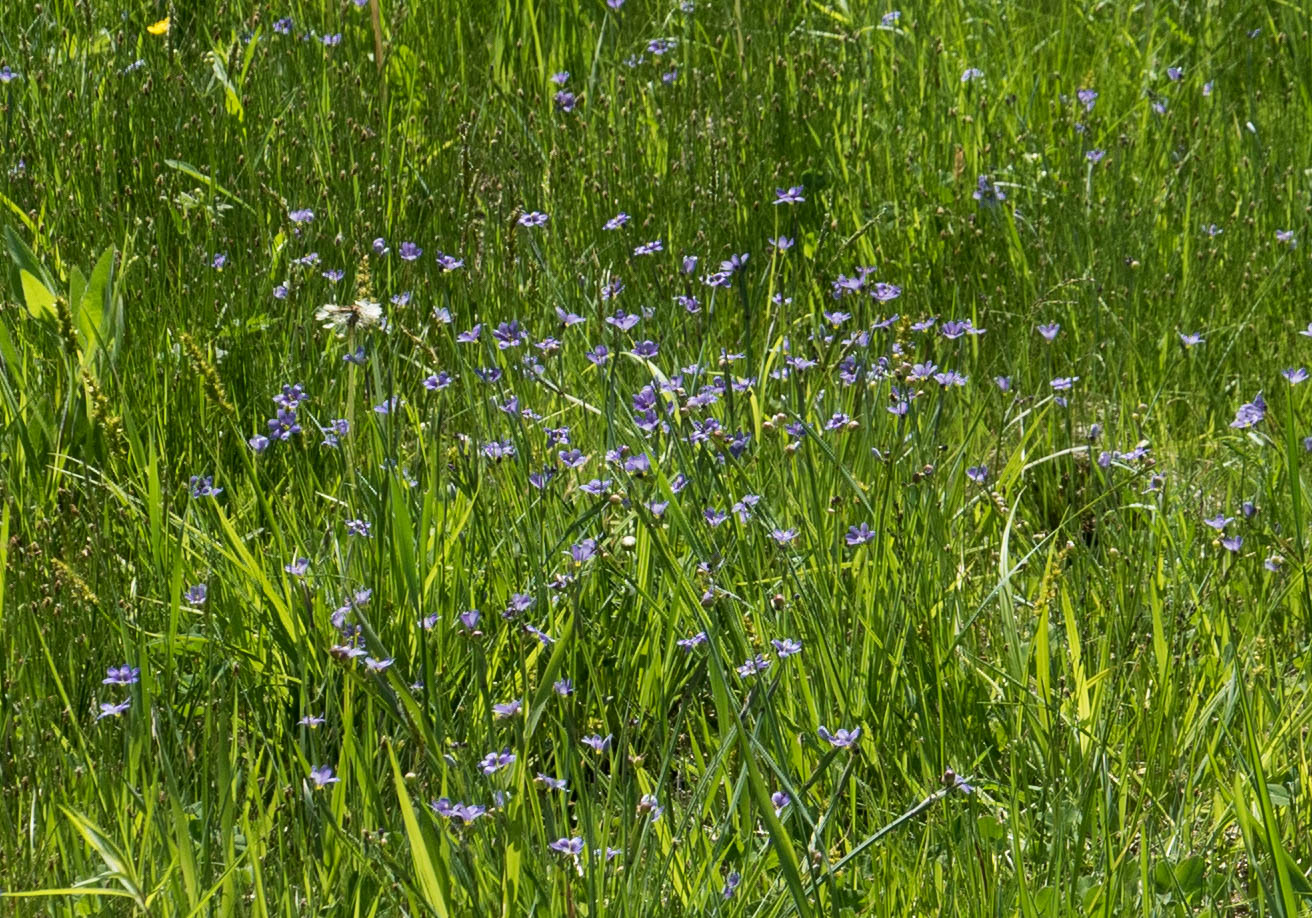 I have several projects on the go at the moment, one of which is La Seigneurie. Last year we planted the seigneurie field with a mix of canola, flax and barley. The colours weren’t as strong as I had hoped, nor was the pattern of long, narrow strips intended to reflect the planting practices used when Quebec was a French colony. So I decided this year to create alternating bands using only two kinds of seeds, oats and red clover.

We seeded the field on May 28 and, happily, it rained that night, giving the seeds the moisture they need to germinate. 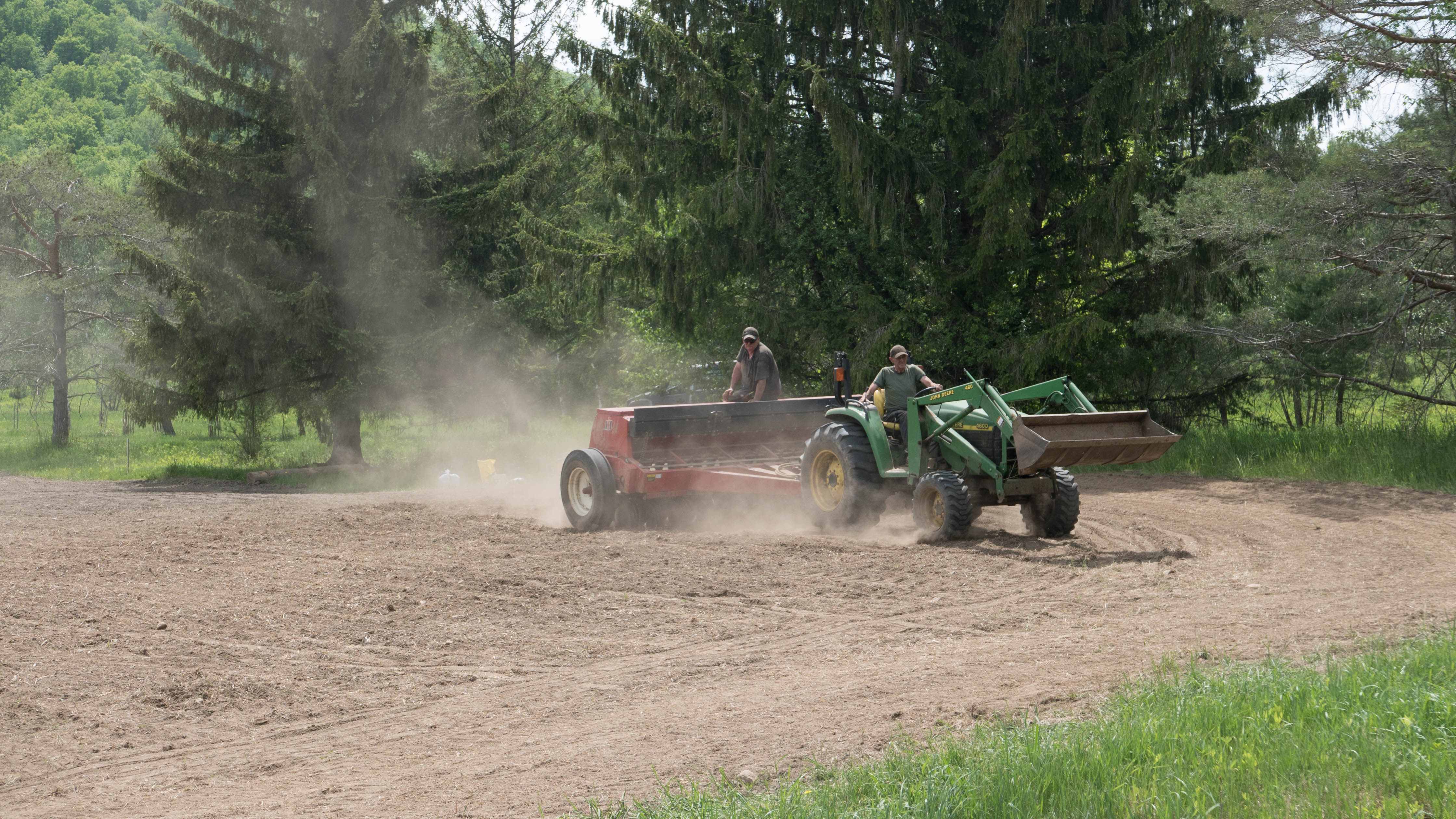 Less than a week later, new growth  was starting to appear. 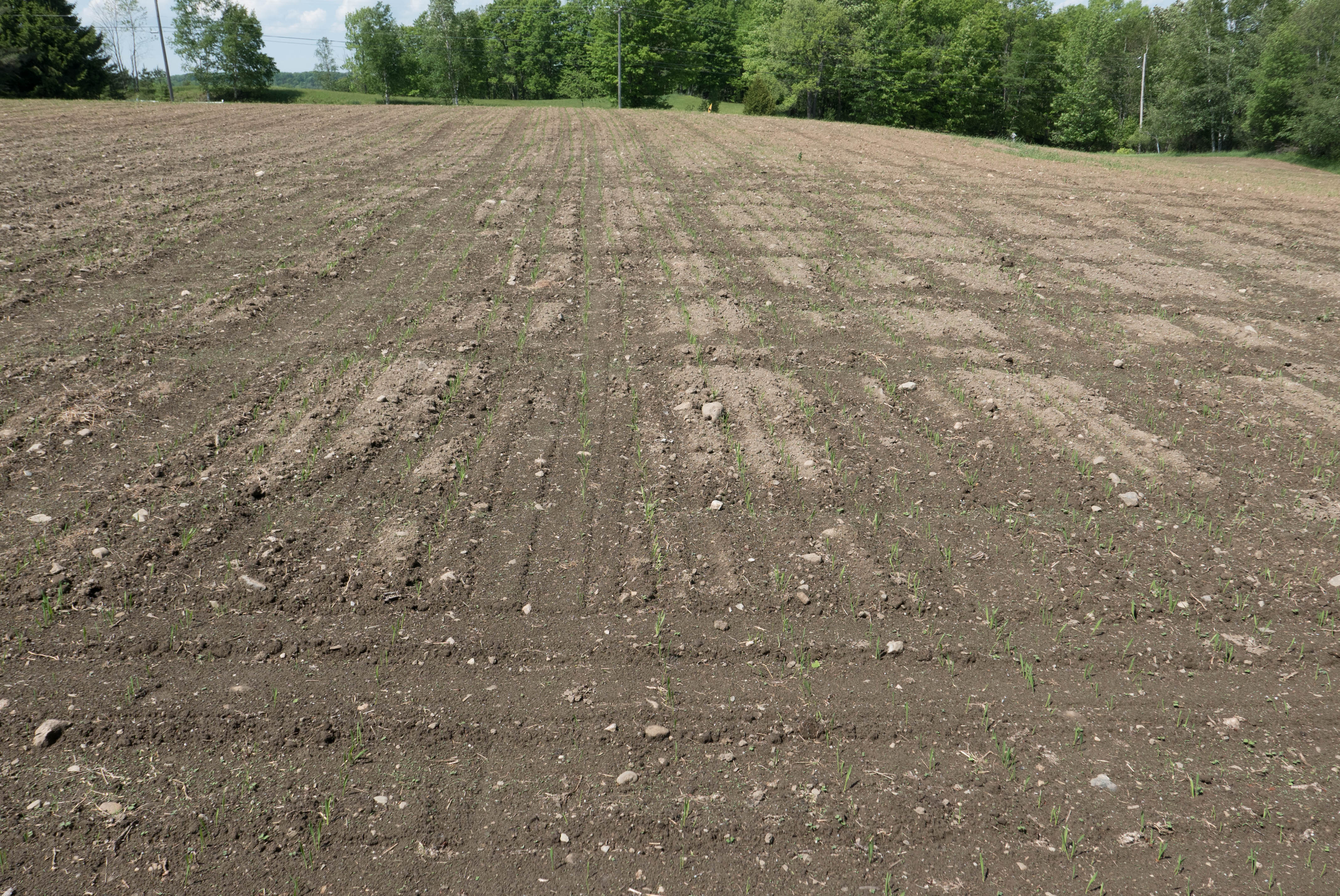 I titled this blog Flowers, Fields and Food. Flowers I’ve shown in abundance, plus one field.  But what about food?

Perhaps you saw the photos I posted last week showing a new-born fawn. Since then I’ve now spotted the baby several times, alone and with her mother. The best sighting was a few days ago, when I was fortunate enough to see the doe nurse her fawn.

I watched the pair for more than 15 minutes, staying well away so as not to disrupt their intimacy. But even though I wasn’t close, I felt connected to the mother and child, not as a voyeur but as another living creature, part of a momentarily peaceful world. 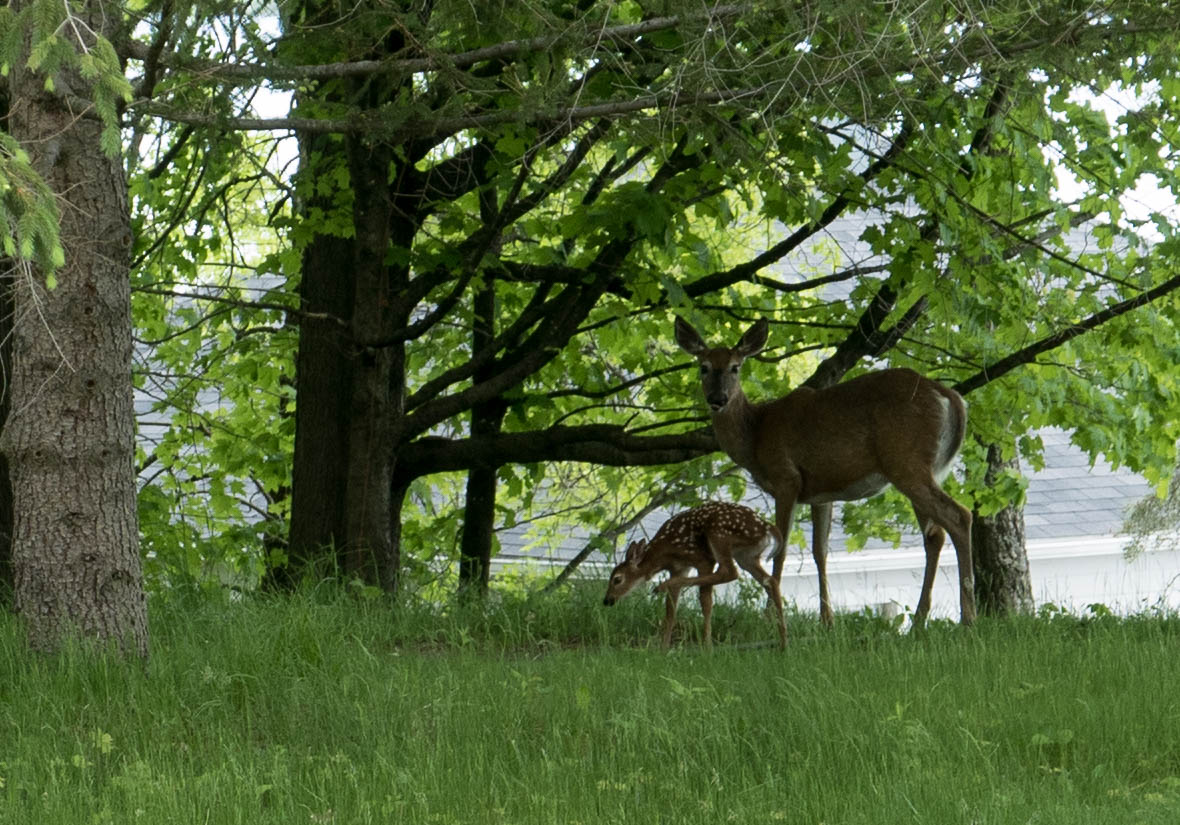 If only such peace would last.

A beautiful post! What a precious moment you captured!