As the Garden Turns 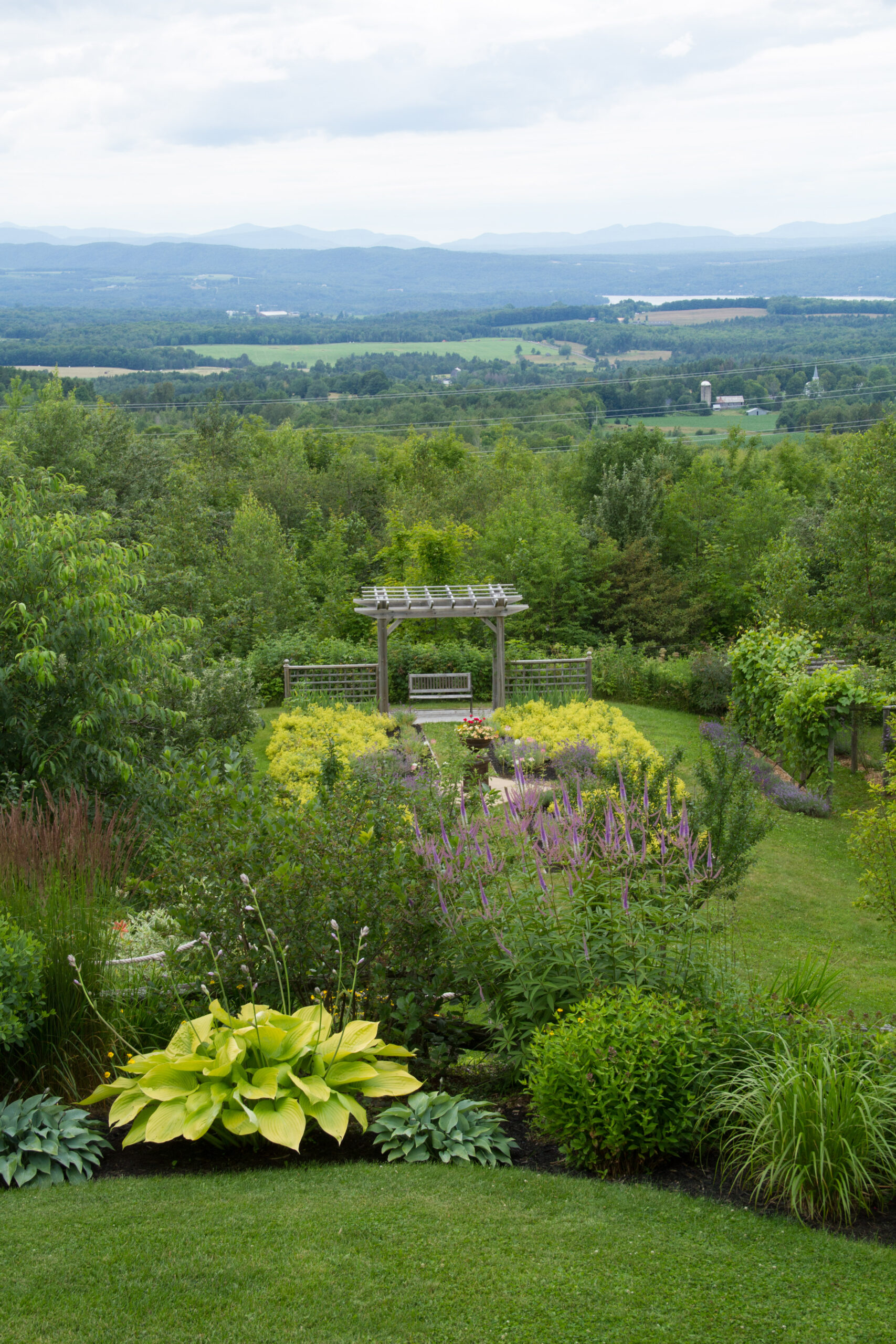 Does your garden turn its face to the world or does it veil it off?  The difference says a lot, about you and the style of your garden — and about the spirit of the times.

Recently I spoke to several groups about how to get the most out of garden visits.  Learning to Look: the Art of Garden Observation considers what it takes to really see a garden. A handout for the talk asks some key questions, starting with the garden’s context.  How does it relate to the world around it? Is it open to its surroundings or closed off?

Topography can make an enormous difference. Properties with panoramic views rarely shut them out, particularly when they look out on a rural landscape. 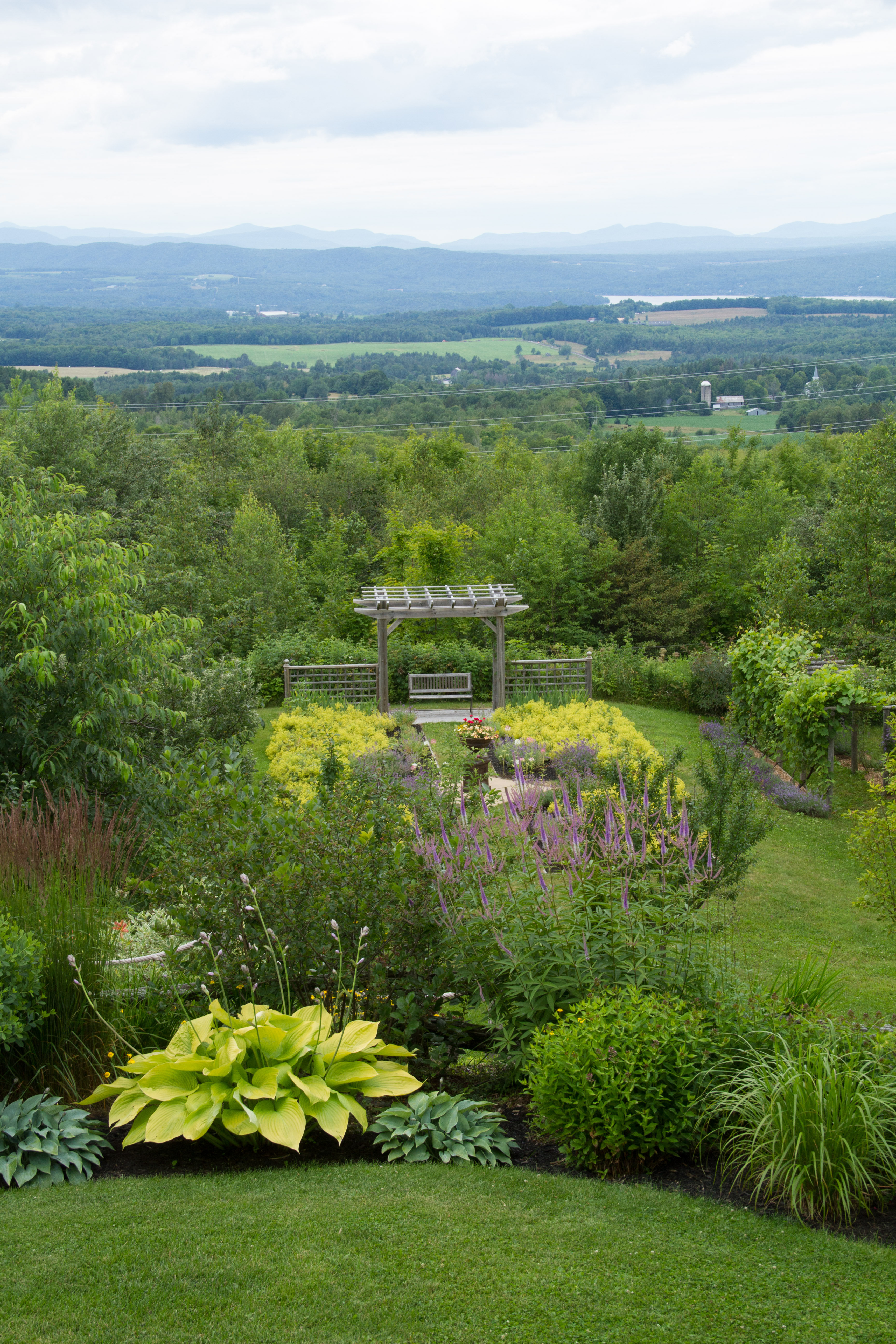 Sitting atop the hillside, residents of this house in Quebec’s Eastern Townships have a spectacular view across the countryside.

If the view is unattractive, however, the garden owner may want to block it out. Ugly walls, telephone poles, rooftops lined with satellite dishes: all interfere with a world view that excludes these urban elements.

Some gardens deliberately close themselves off from their surroundings, attractive or not, creating a private universe that holds the outside world at bay. 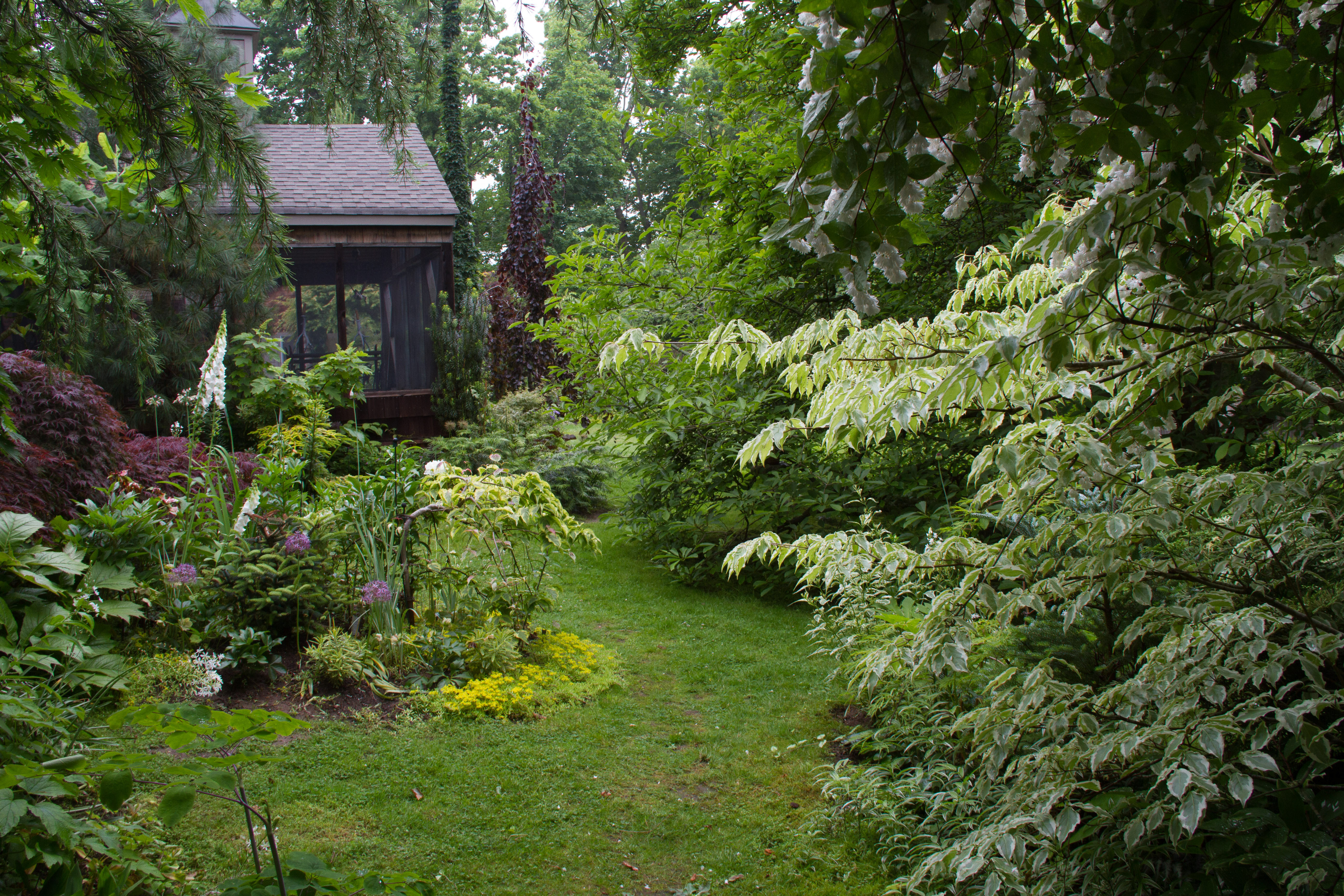 From inside this densely planted garden, you’d never know that other houses are located close by.

Sometimes views are hidden, by accident or design. 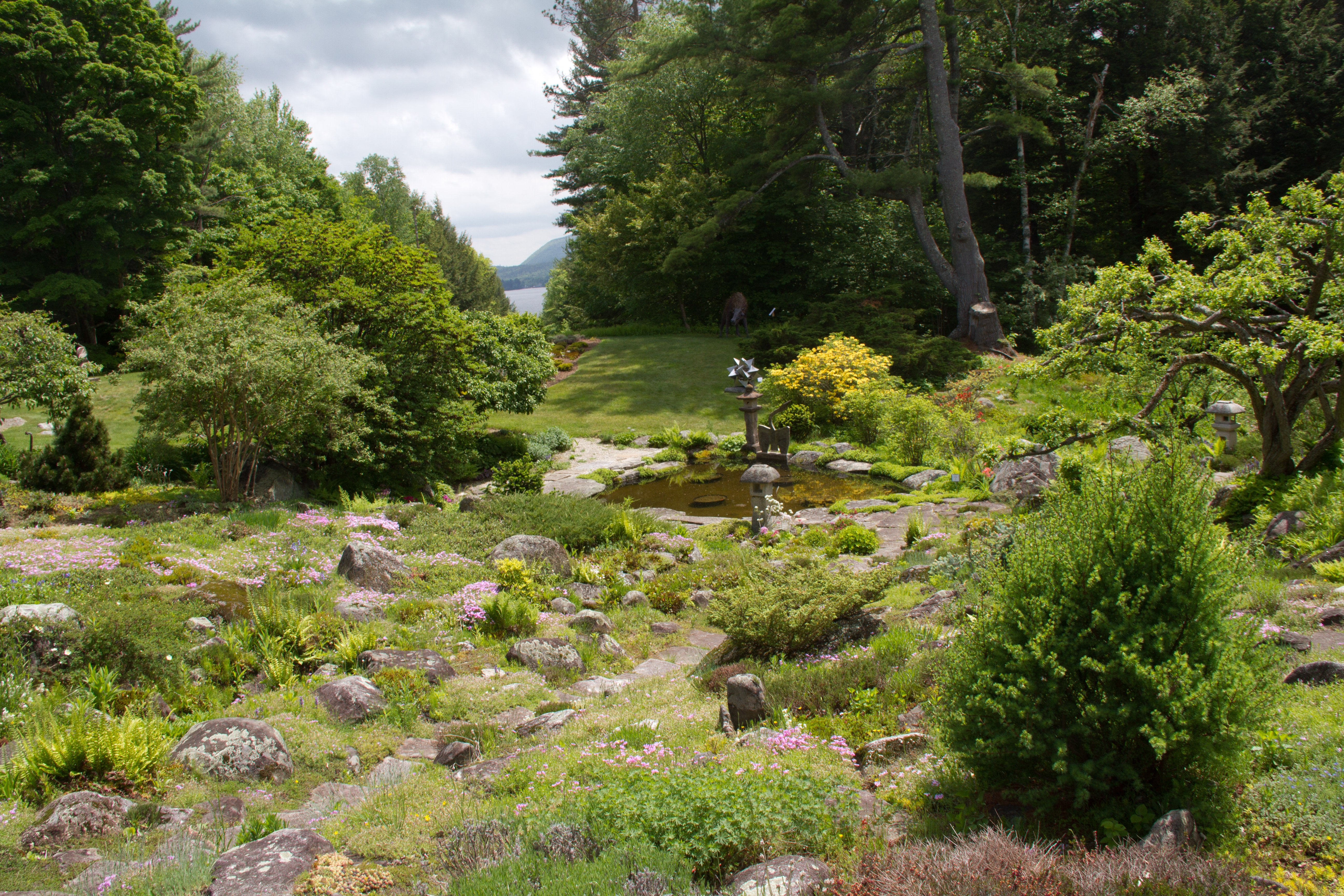 Only the tiniest piece of the view here at The Fells, New Hampshire, is open. 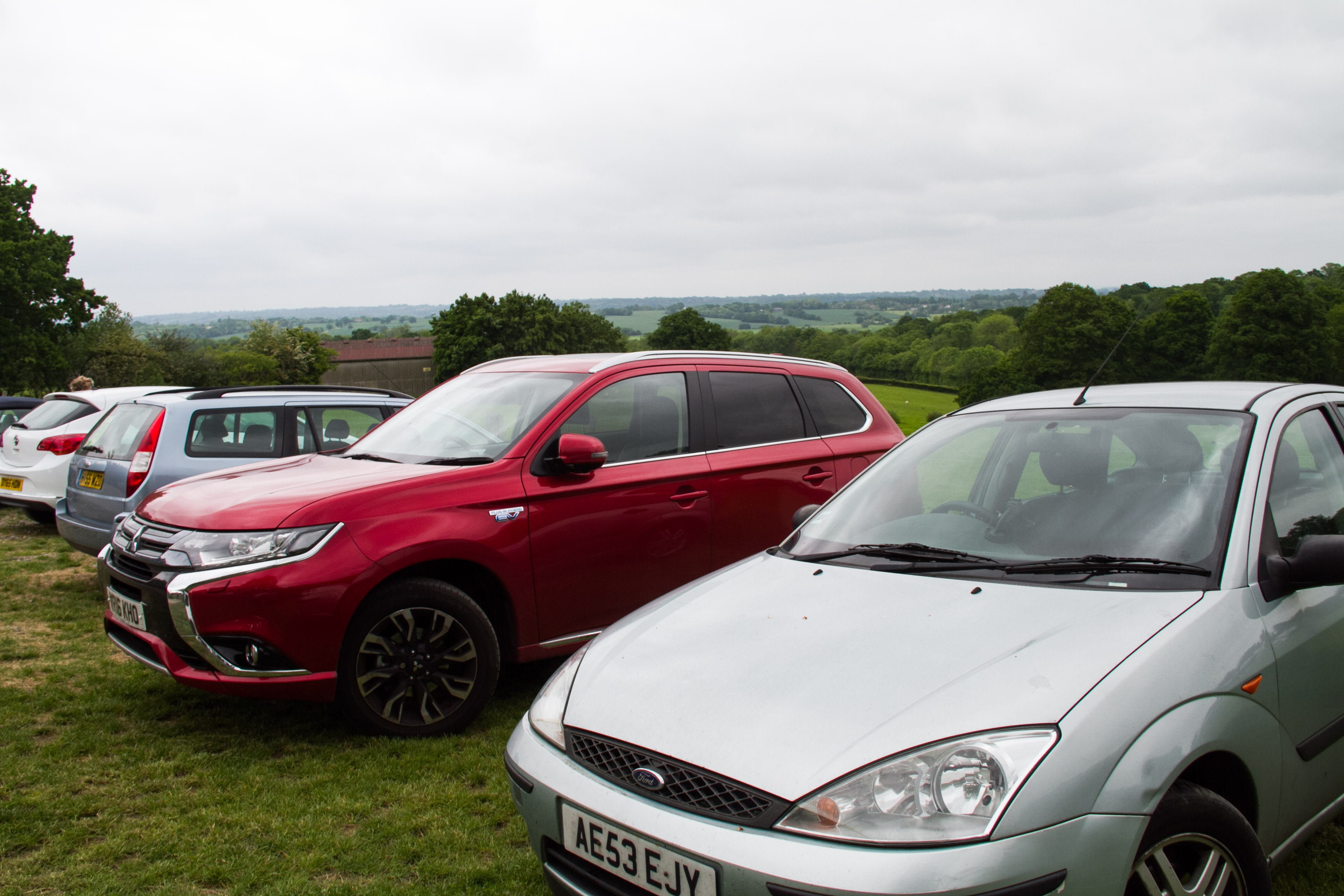 Behind the cars is a quiet pastoral scene where sheep graze in green fields.

The effect of this is to turn the view and the viewer back towards the garden itself. 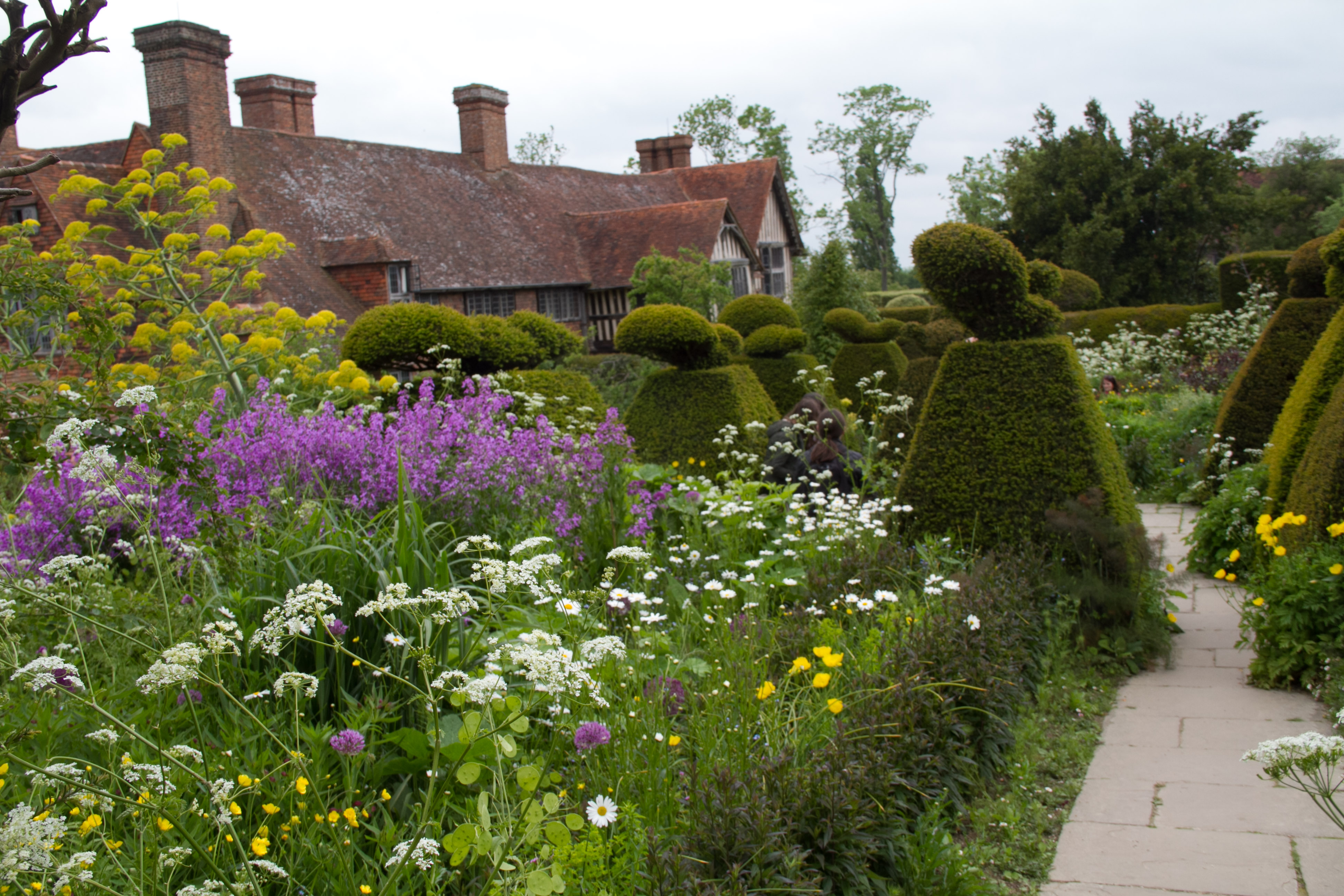 It’s hard to complain about having to look at a view like this.

The garden at The Mount, Edith Wharton’s house in Lennox, Massachusetts, exists in a bubble, disconnected from everything around it. 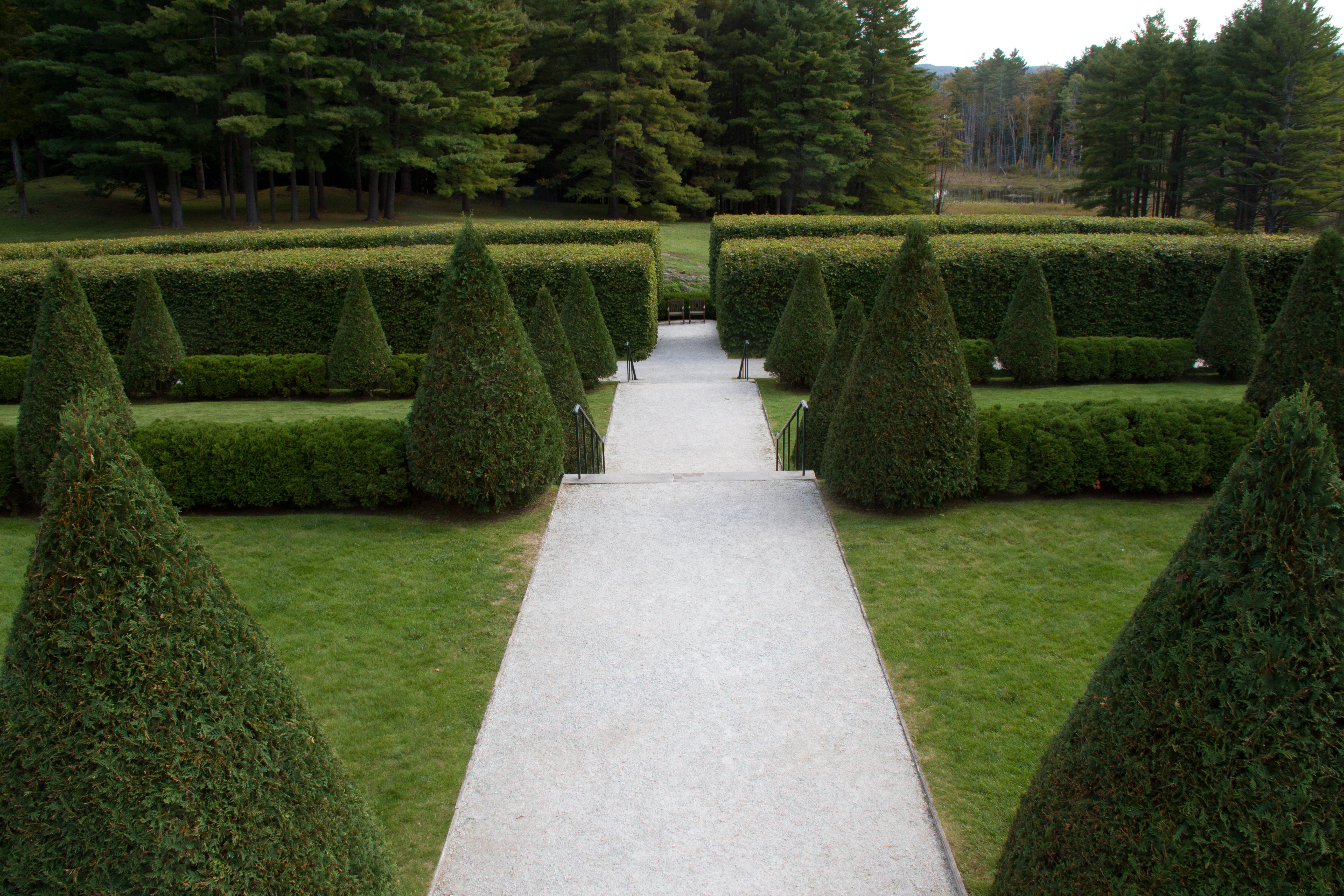 Tucked behind those tall trees at the end of the walkway is what could be a view of the surrounding landscape.

By hiding the view, the house and the people who live there take centre stage. 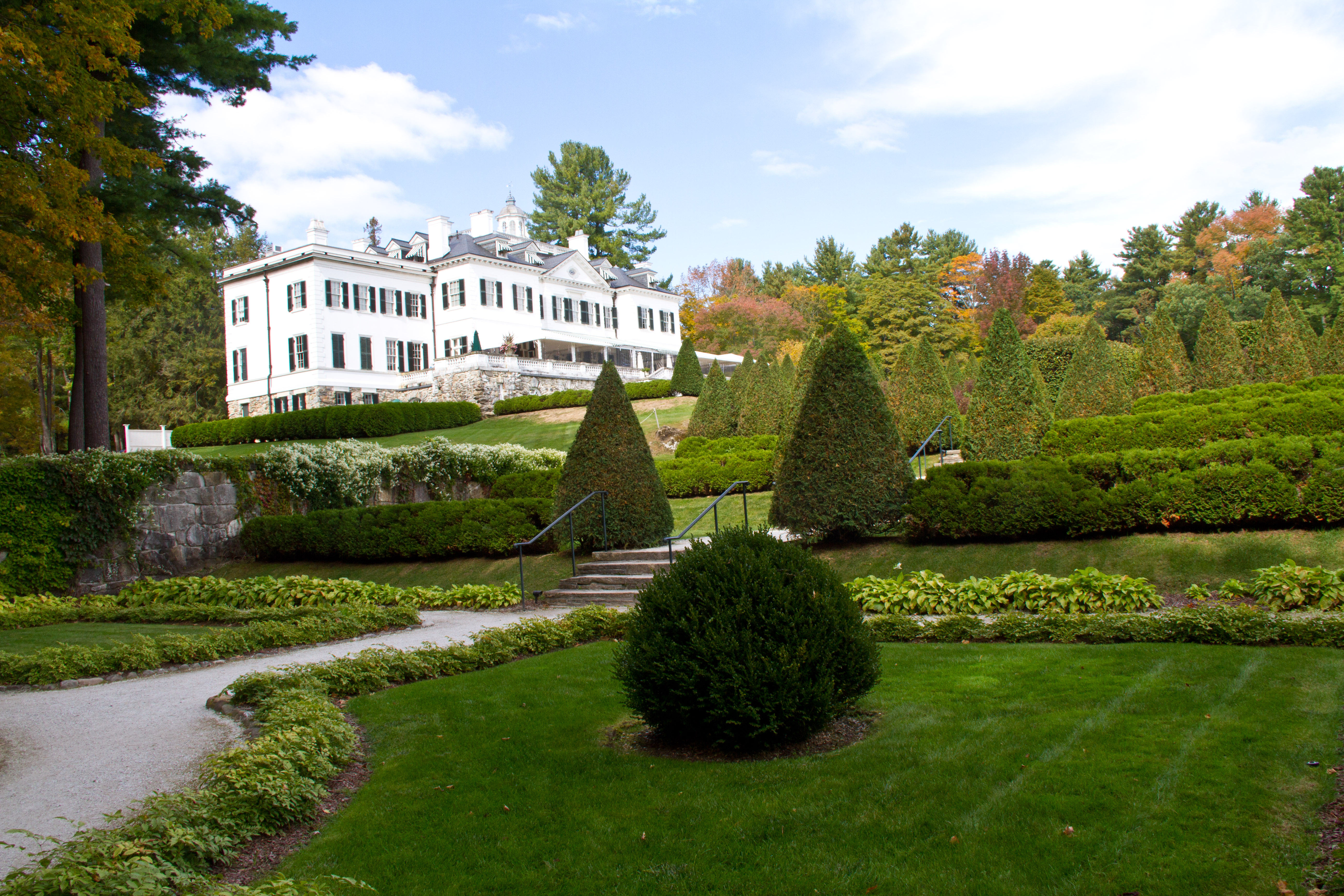 The house dominates the view from every part of the garden.

Contrast this inward-looking attitude with Sunnylands, the historic California estate of Walter and Leonore Annenberg. At Sunnylands, everything is directed outwards, across open lawns towards the towering, snow-capped San Jacinto mountains. 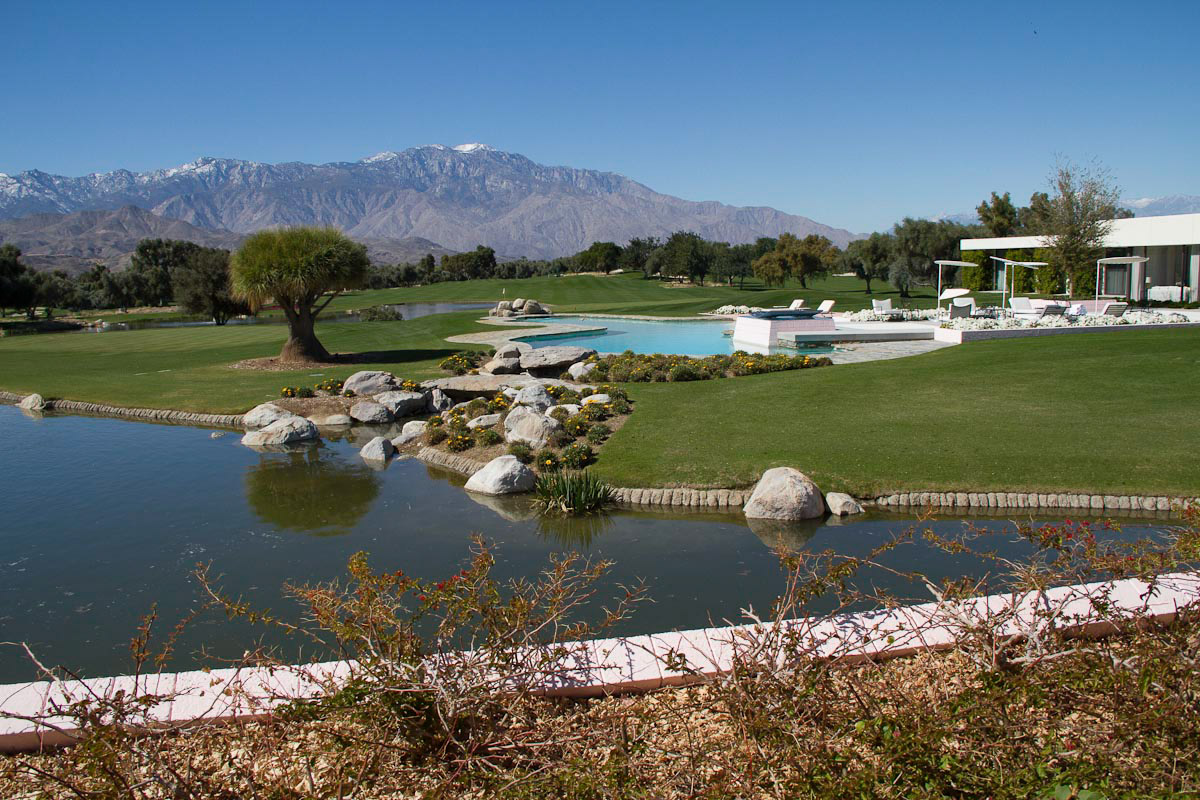 It would be impossible to hide the view of the mountains. And who would want to?

The difference in orientation reflects a difference in the spirit of the place and the spirit of the times. The names of the houses do the same. Following English and Italian models, The Mount stands above, expressing in its architecture Wharton’s ideas about order, scale and harmony. Sitting low to the ground and with glass walls that connect indoor and outdoor spaces, Sunnylands becomes an element of the landscape, one feature among many.

An openness to the surroundings characterizes many American gardens. Neighbourhood streets are lined with houses that may be divided, one from another, by hedges or low flower beds, as are these houses in Hanover, New Hampshire. 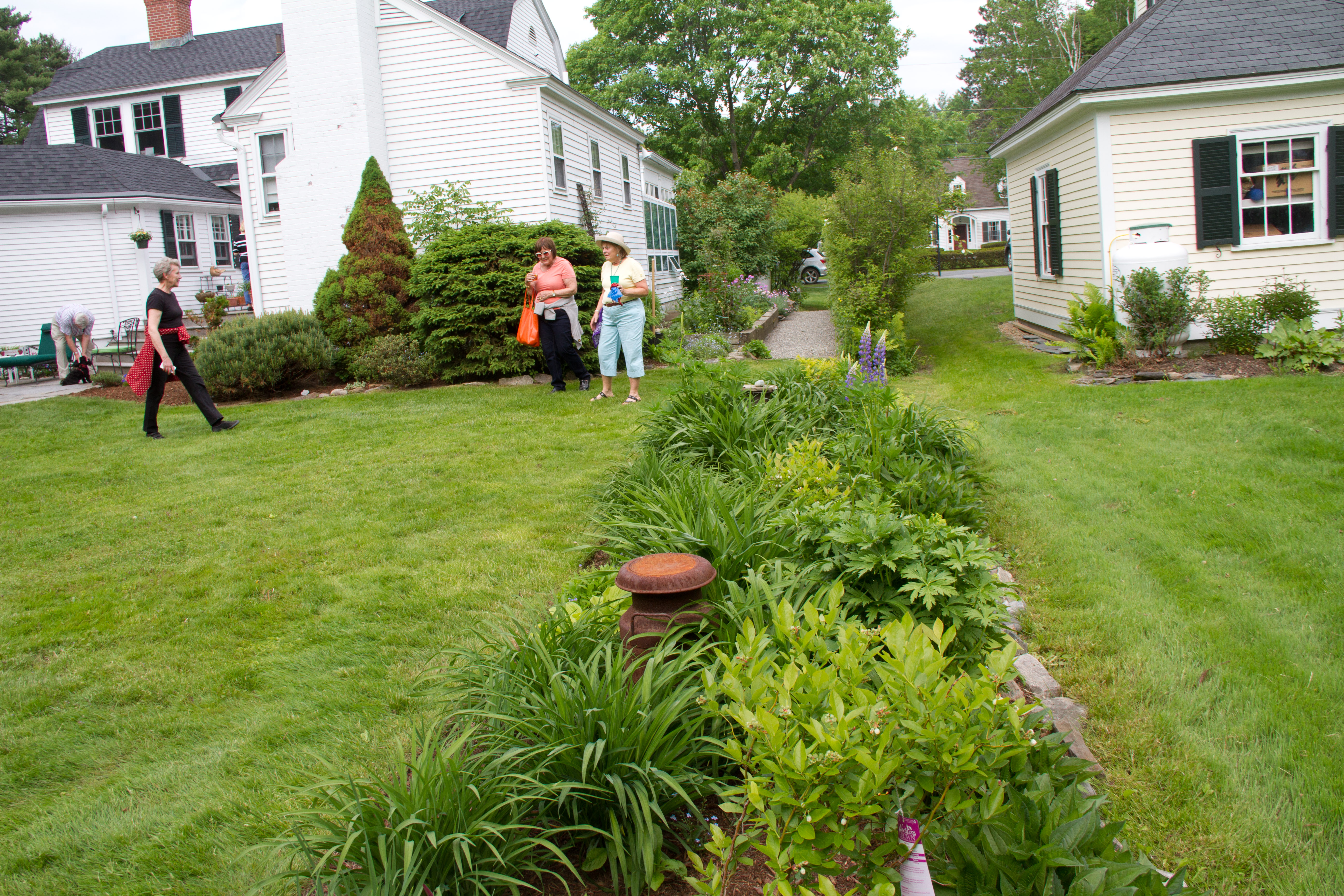 Several years ago, I was part of a small group from Montreal fortunate enough to visit several private gardens in New Hampshire and Vermont.

A different sense of neighbourliness can be found in British properties. This small town garden lies as close to its neighbour as the American garden does but separating the two English gardens is a tall stone wall. 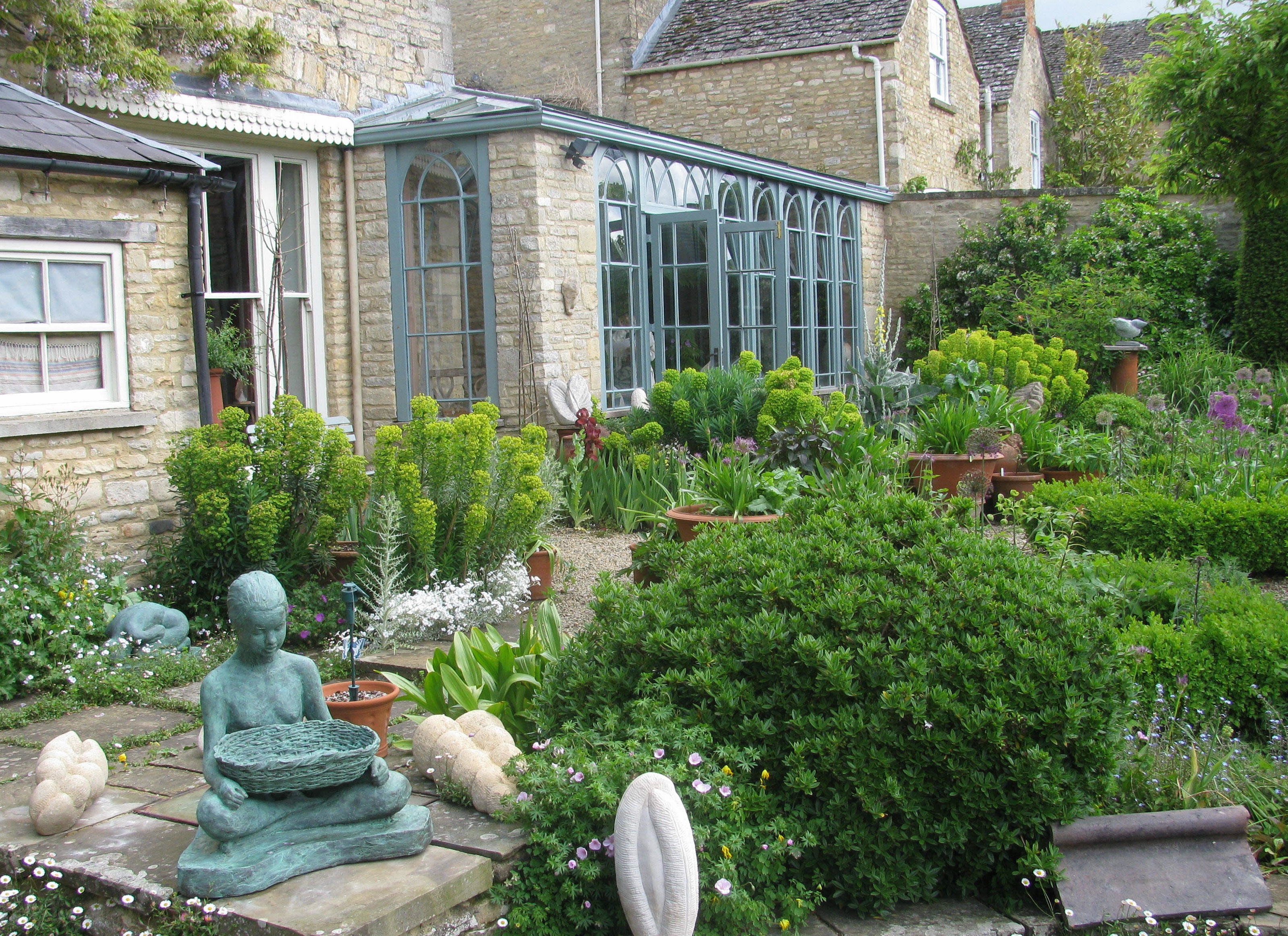 An artist and a photographer live here. Both are gardeners.

At Glen Villa, as in many larger properties, the view is open to the world in some spots and closed in others. For privacy, the view of our house from the lake is screened by trees planted many years ago by previous owners.

A few years ago we removed two pines that were dying and, as a result, opened up the view onto the lake. But enough trees remain to provide privacy.

From inside the house and from most places in the garden, the view is open. 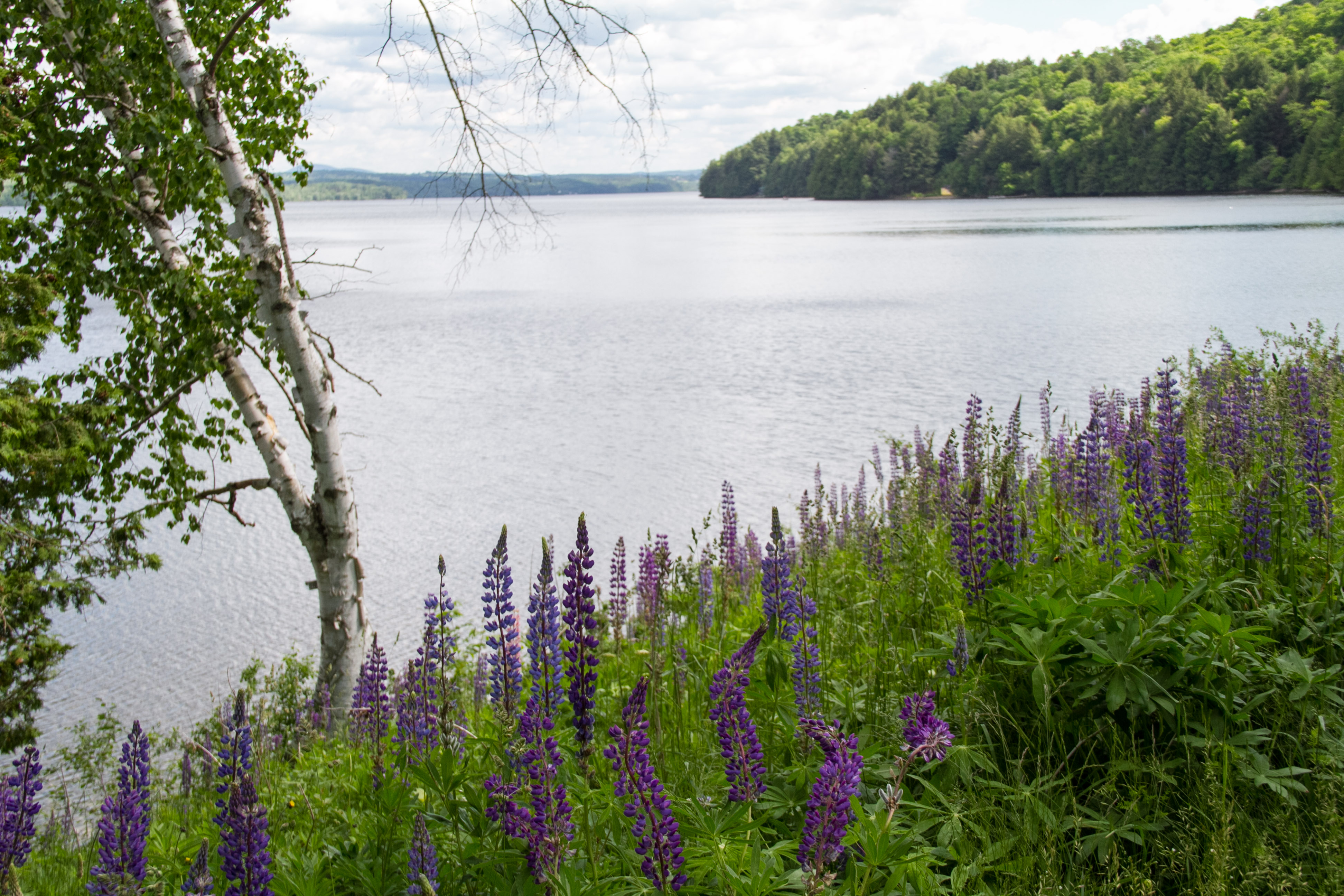 Lupin blooms wild on the bank of Lake Massawippi.

Historically, gardens were closed off from the outside world, for protection from animals or marauders. A change occurred in the 18th century in England, indicating a change in the way people related to their surroundings. Joseph Addison, writing in The Spectator in 1712, asked

“Why may not a whole Estate be thrown into a kind of garden by frequent Plantations, that may turn as much to the Profit, as the Pleasure of the Owner? … If the Natural Embroidery of the Meadows were helpt and improved by some small Additions of Art … a Man might make a pretty Landskip of his own Possessions.”

That’s what I’m aiming to do at Glen Villa, not to turn the landscape to profit but to turn it to art. I’ve written here about The Avenue, the allée of crabapple trees we planted last fall.  Public roads on two sides of The Avenue make the “pretty Landskip” visible to anyone passing by. 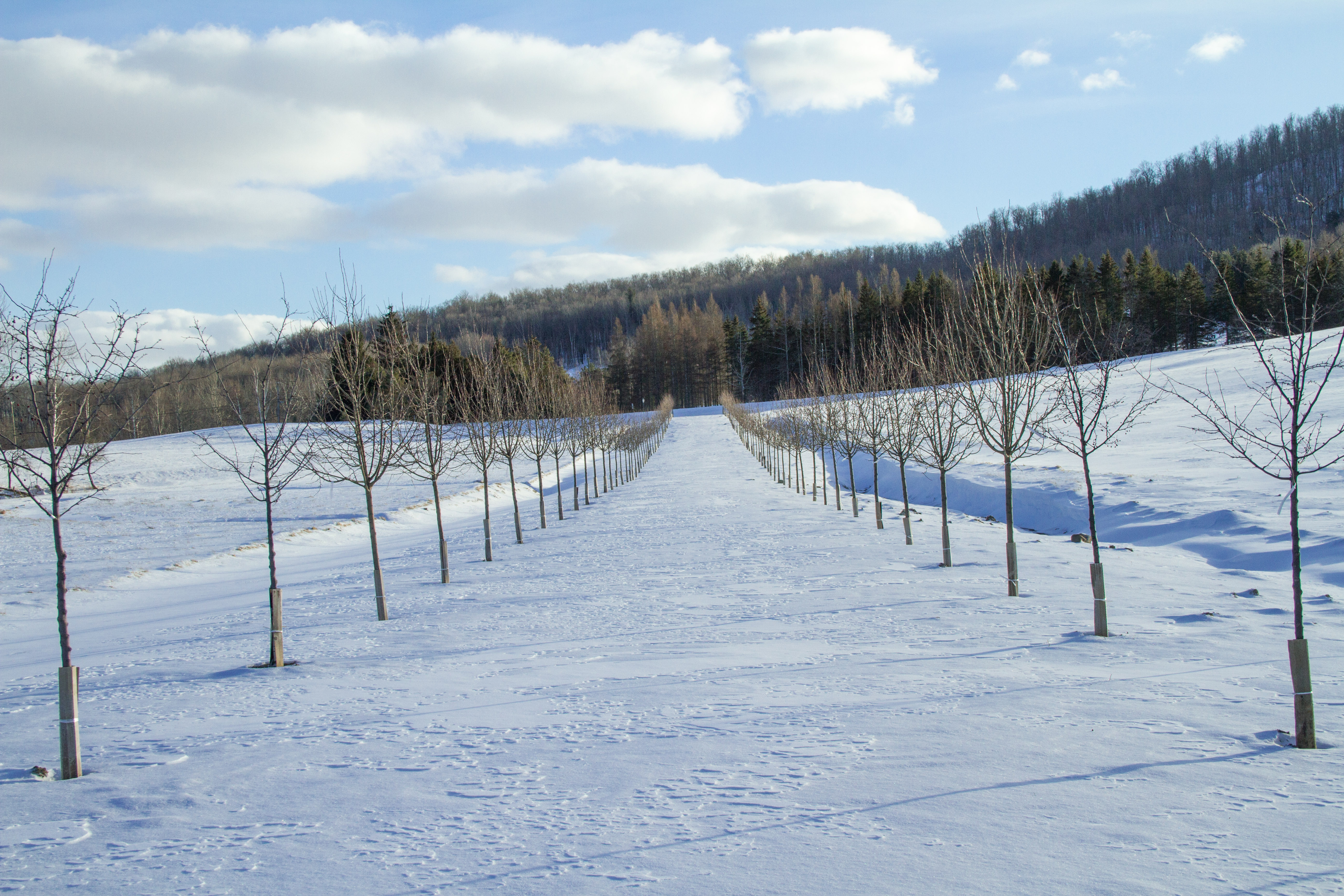 The snow has now melted, leaving the ground bare and very muddy.

Last week I made a short video about The Avenue that is now being shown on Garden Design’s Instagram page. As I write, almost 12,000 people have watched the 1 minute video. I hope you’ll join them, and join me as a subscriber to the magazine. It is an ad-free bundle of information, presented along with beautiful photographs.

I hope, too, that you’ll think about how your garden turns, to the world or away from it. Does it send the message you want it to send?

I’d say the front of my house is open to the public, and the back is private. I would like to make the front more private but I’m not sure my family would agree. But I did strategically place some shrubs around our front porch to give some privacy there.

Lupins are a good sign of spring but not sure about the snow on the avenue. My Sunday afternoon siesta was pleasant on Willows Beach today! 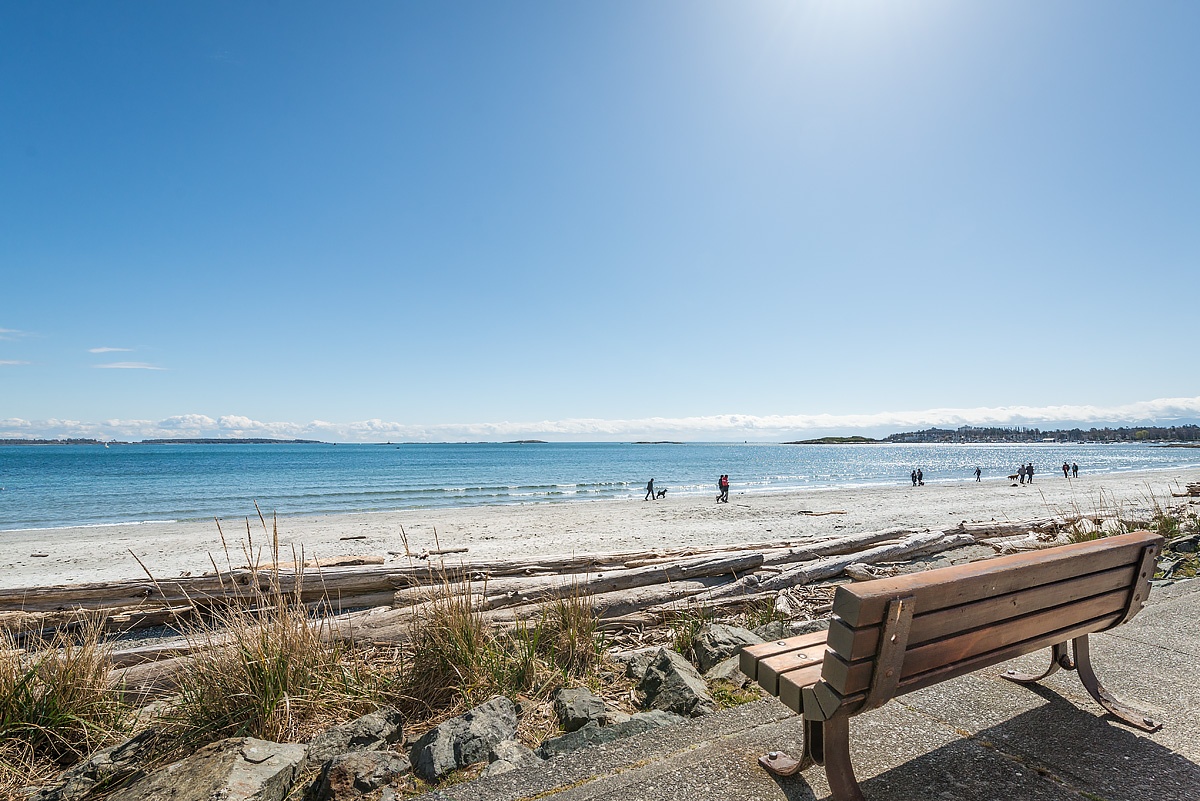 The Avenue is bare of snow now, thank goodness. And today the temperatures went up to 14C!

As Kathy says, our front garden is really made to be viewed from the outside, the back garden is private. That’s a stupendous view in the first photo, and I am very impressed by the Veronicastrum in the foreground.

A public front garden and a private back garden are typical for North America town or city gardens. And yes, I agree, the view from the hilltop is stupendous and the garden a very well thought out space.

You did a wonderful job of illustrating your points with the photos you selected. I’m sure your allee will be spectacular when it develops. Our own home and garden focuses on the view of the Los Angeles Harbor visible from the back. While I might prefer a view of the open ocean, that’s VERY pricey in these parts, and the view of the cruise ships and other traffic in the harbor is interesting and ever-changing. In our case, the view of and from the street is somewhat obscured by hedges, lending a modicum of privacy in what’s a relatively urban environment.

It took some time to find the best photos so I’m glad you found that they illustrated the ideas.

A view on water is always exciting, I think. Seeing traffic in the harbour must be fun.

Pat, Enjoyed your insights of gardens in their environments. Beautiful illustrating photos. The allee of apple trees should be wonderful come spring!

Thanks, Marilyn. After the last few days of warmer weather, I’m keeping a close watch. Another few weeks, for sure, before they bloom.

Hi Pat, I found this post fascinating.
Our predecessor had an obsession with privacy. He planted fast growing conifers all around the house, as close as 6 feet from the walls, some directly behind the house on a steep slope. I can’t describe what that felt like in a gale! We had them all down on professional advice, about 25, plus others which were obscuring the view of the valley below us. Now we see deer wandering through the garden (a mixed blessing!) herons, ducks and all manner of other wildlife. And I can sleep at night!

I understand what you mean about the trees and high winds. We had a house where it was hard for me, a VERY good sleeper, to fall asleep at all. Trees 6 ft from the house — that doesn’t sound appealing. And how much better it must be to have a good view over the valley. Deer — oh, dear.