The Straight and (not very) Narrow 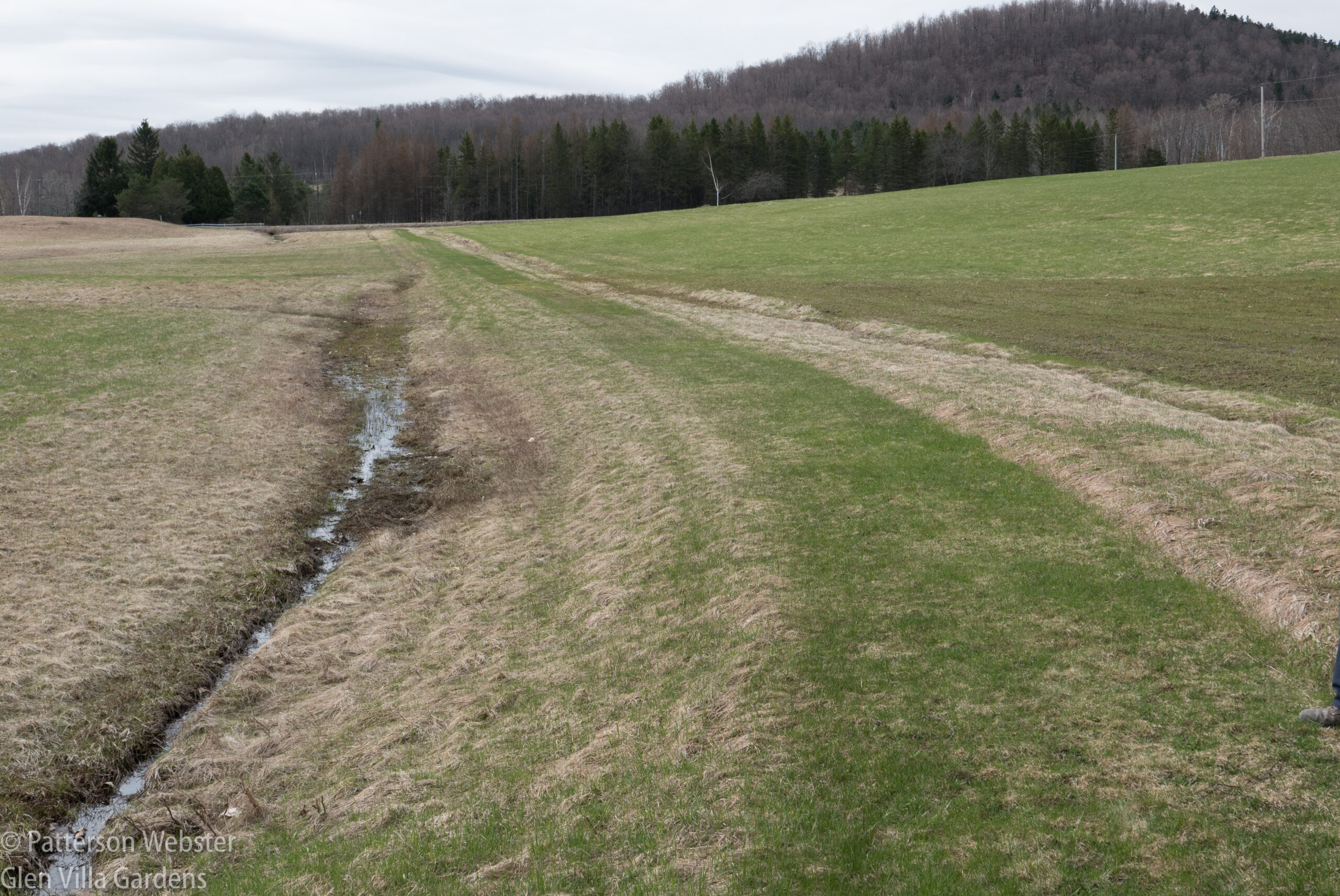 When is a straight path not straight enough? When is it too narrow?

Last March, I decided to transform an unused farm field into something spectacular by lining the path that ran through it  with crabapple trees. When the ground was barely thawed, I paced out the length to determine how many trees to order. 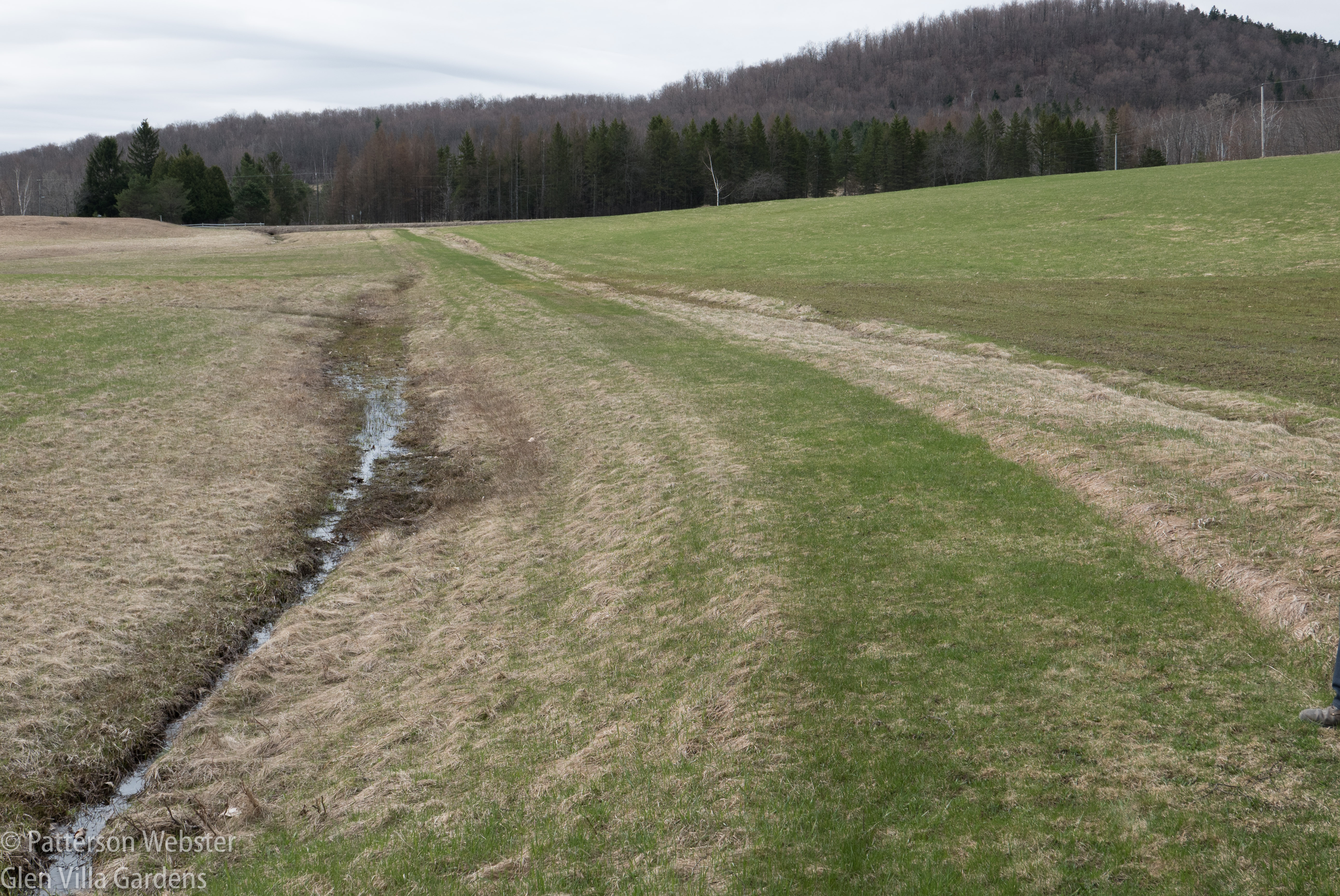 This path was a convenient short cut across a flat farm field.

The number made me stop and think. Was it worth It?  The mental picture of trees in full bloom took my breath away and I decided it was. 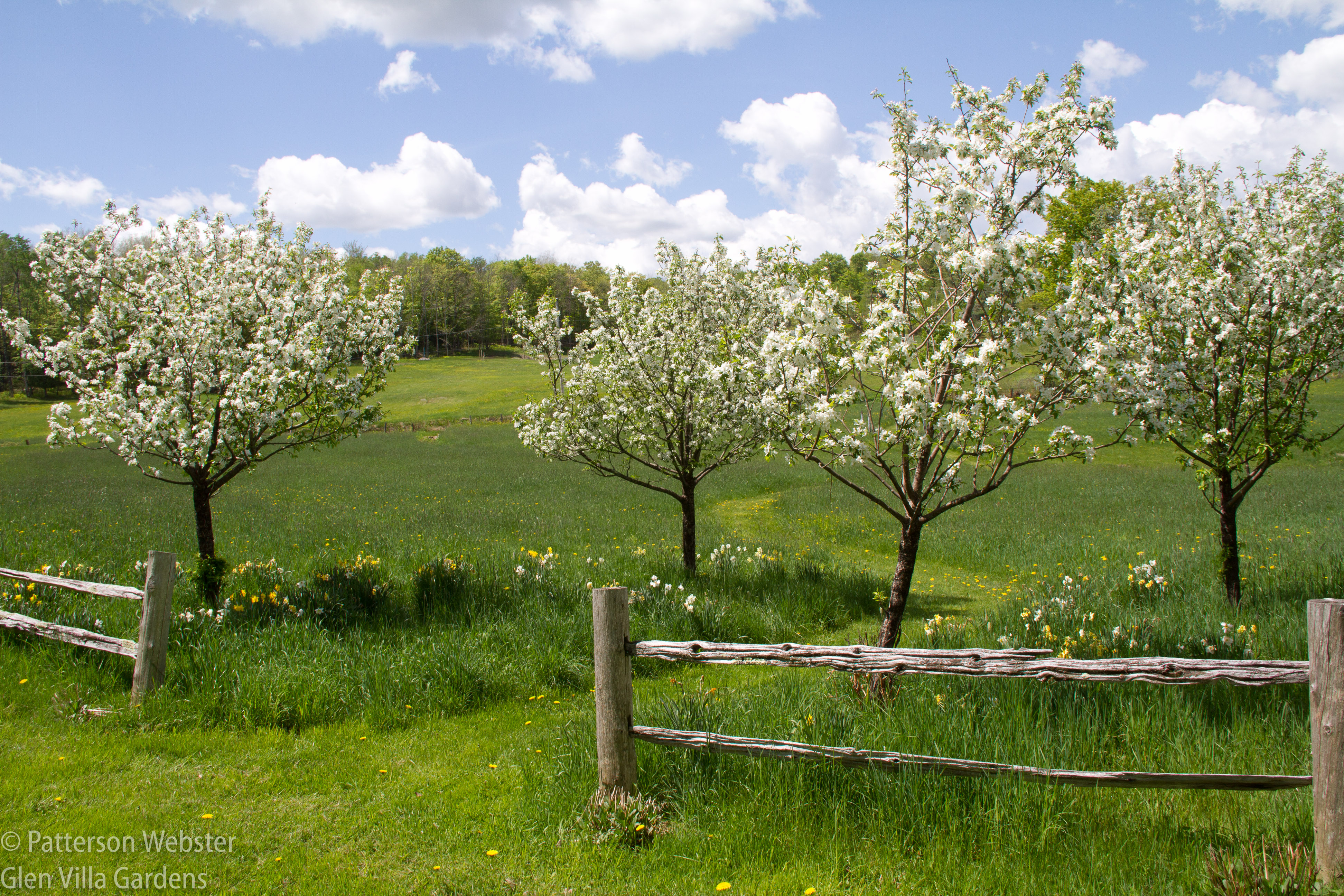 These crabapple trees in front of my daughter’s house are a variety called ‘Dolgo.’

I began to research the best varieties for our situation. I wasn’t sure if I wanted pink or white blossoms or if I wanted both. And how should I arrange them?  Should I alternate the colours, mix them at random or establish some other kind of pattern?

As I often do when I face a decision like this, I called my friend, the landscape architect Myke Hodgins. We talked about the possibilities and he suggested the pattern I’m using, a single line of white blossoming trees on each side of the path, with a square of pink ones to mark each end. He also suggested that I continue the trees across the driveway to create a tunnel of pink, an idea I found immensely appealing. 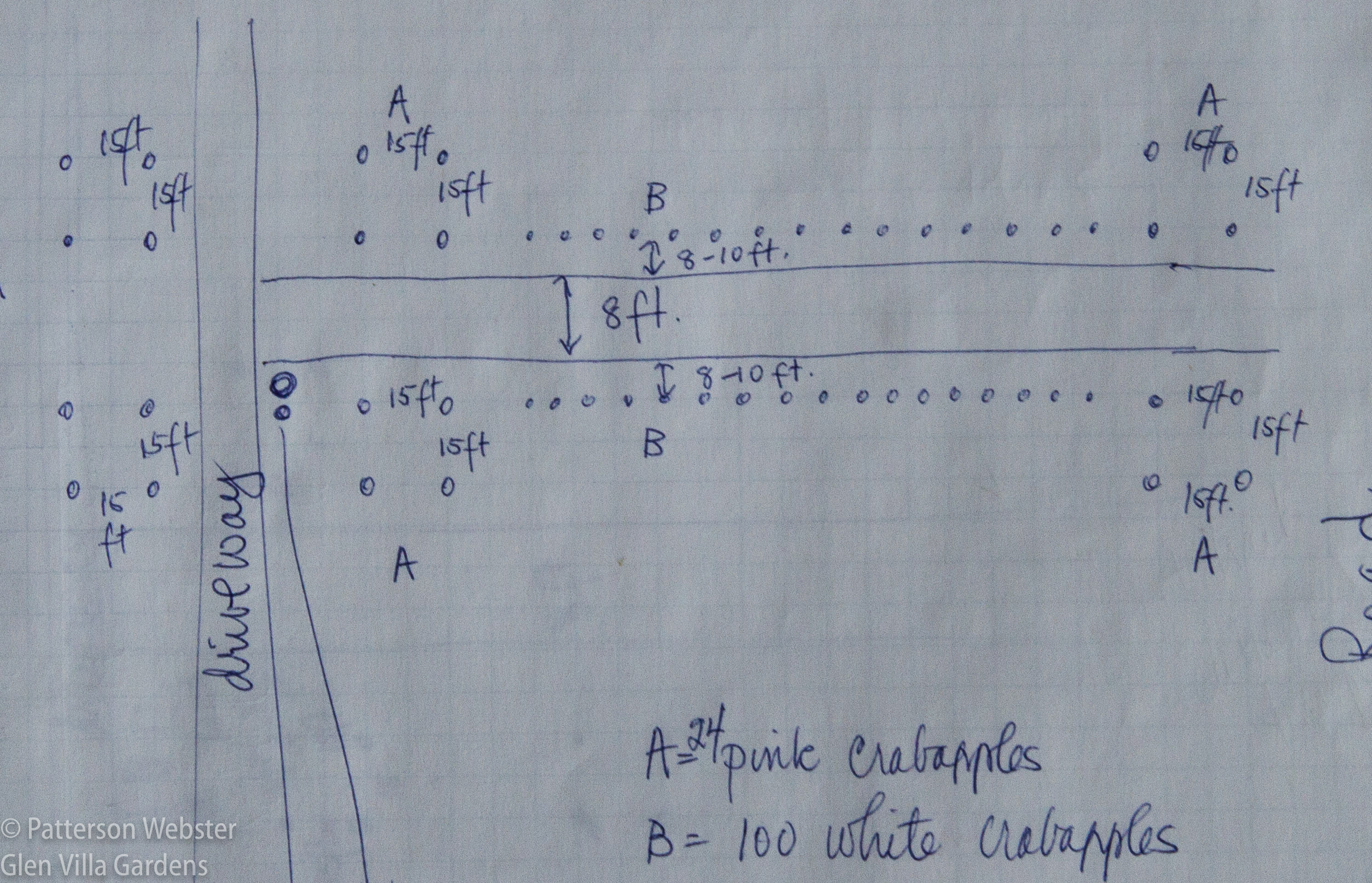 A preliminary drawing gives a rough idea of the planting plan.

I narrowed the selection to six possible varieties and made the final choice based on what could be sourced locally in the quantities I needed. That meant ordering 24 Malus x moerlandsii ‘Profusion’ (violet-red blossoms, bronze-green foliage and bright red fruit) and 100 Malus ‘Dolgo’ (white blossoms and overall reliability — plus the crabapples make a very tasty jelly.)

We began to prepare the site in mid-August.  I thought it would be an easy job. The field was flat, the path was straight and all we had to do was widen it a bit.

I was wrong on all counts. Very wrong.

The path wasn’t straight. It ended far too close to a telephone pole and to a tree I wanted to keep. And it was much too narrow, particularly considering the ditches we’d have to dig. 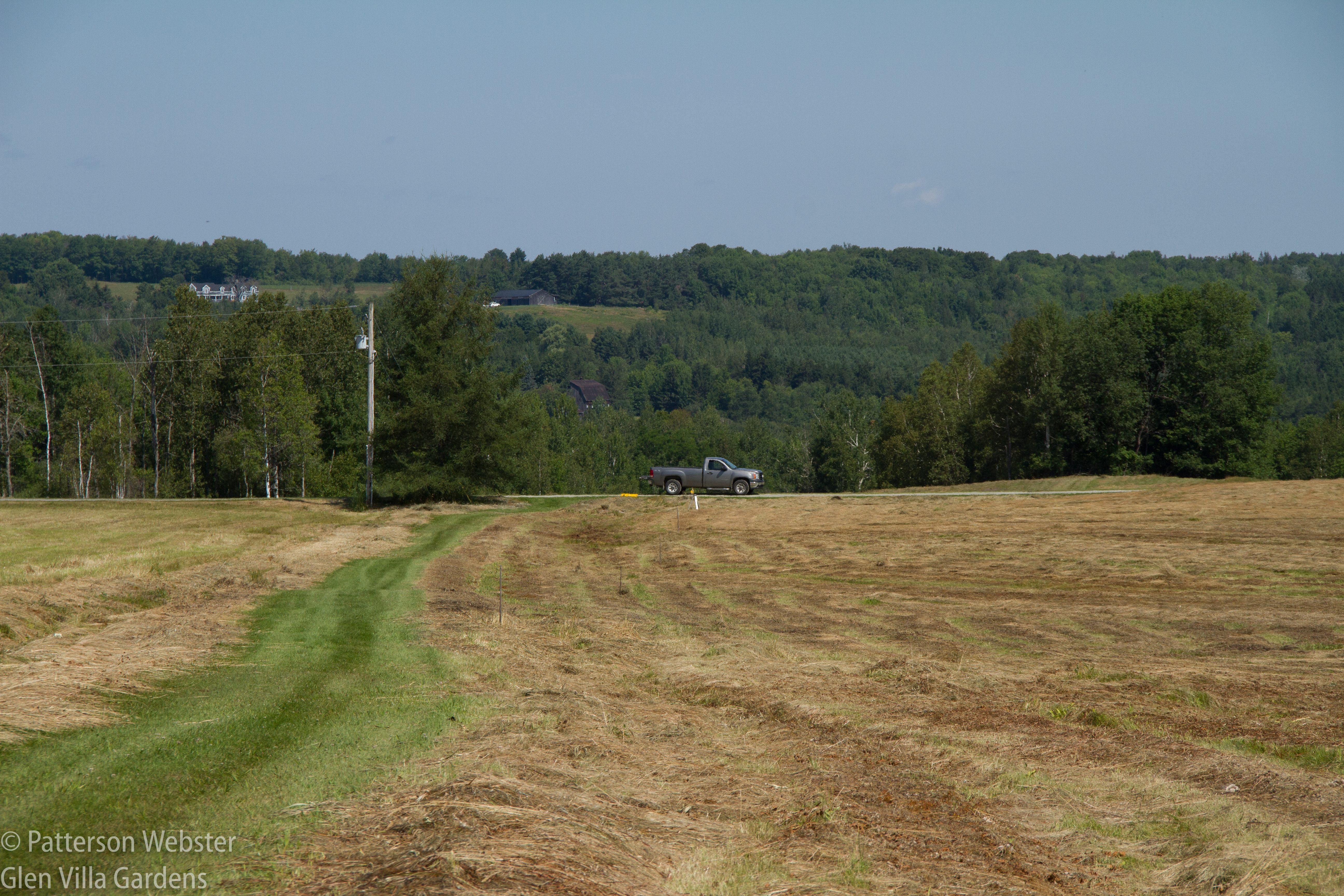 The path looked straight from the other end, but once I looked at it carefully, the wiggles were too obvious to ignore.

To avoid the tree and the telephone pole, we shifted the path towards the truck you see in the photo above. We widened it from 8 feet to 12 feet. We added another six feet on either side, to give enough space for walking once the trees spread to full size. Then came the ditches, essential in a sometimes soggy field. And suddenly we  were looking at a plowed strip 60 feet wide. 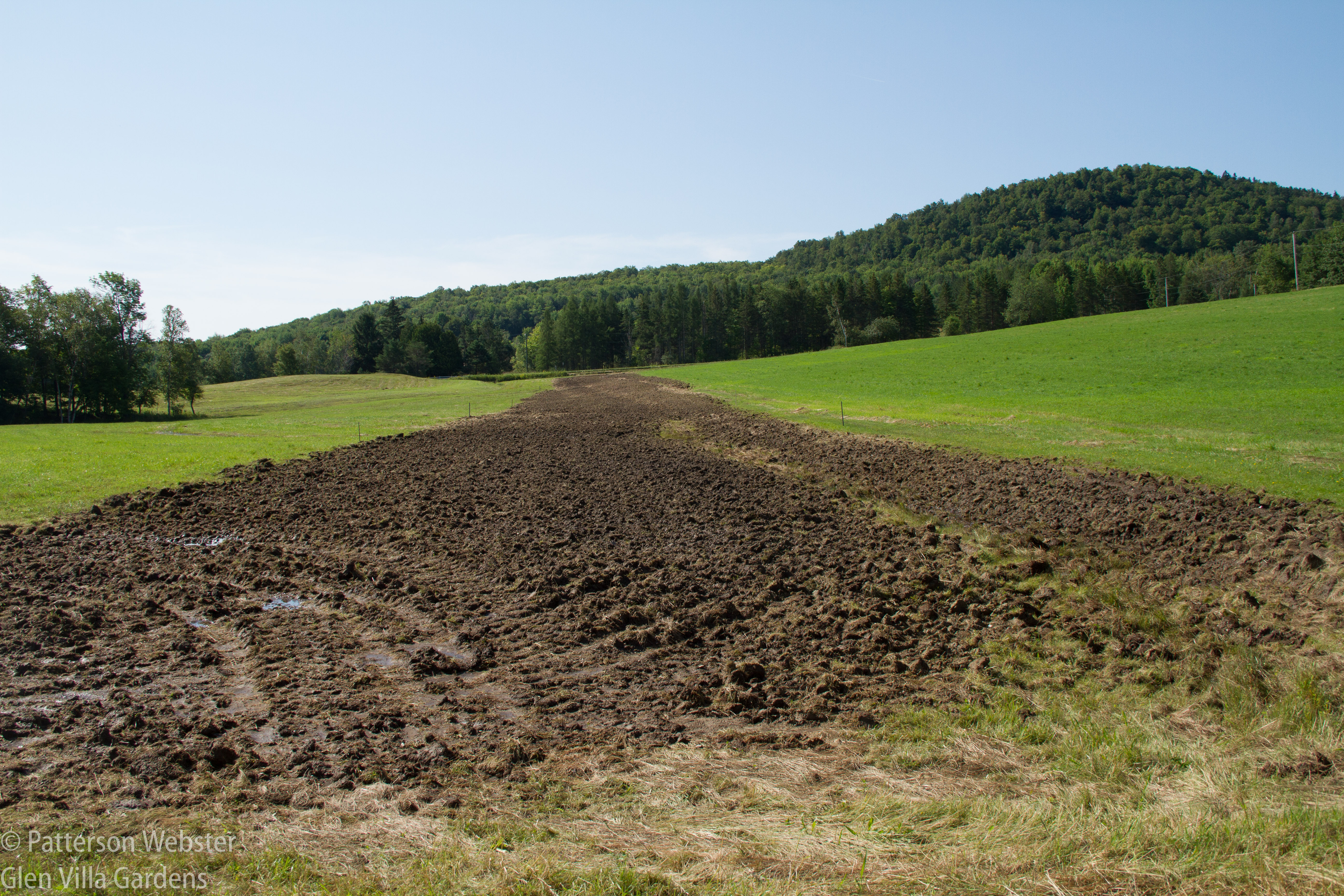 Step 1 was harrowing the field to make the job of straightening and widening the path quicker and easier.

Then the real work began. Equipment was hired. Ditches were dug, necessarily deeper and wider than I had anticipated. 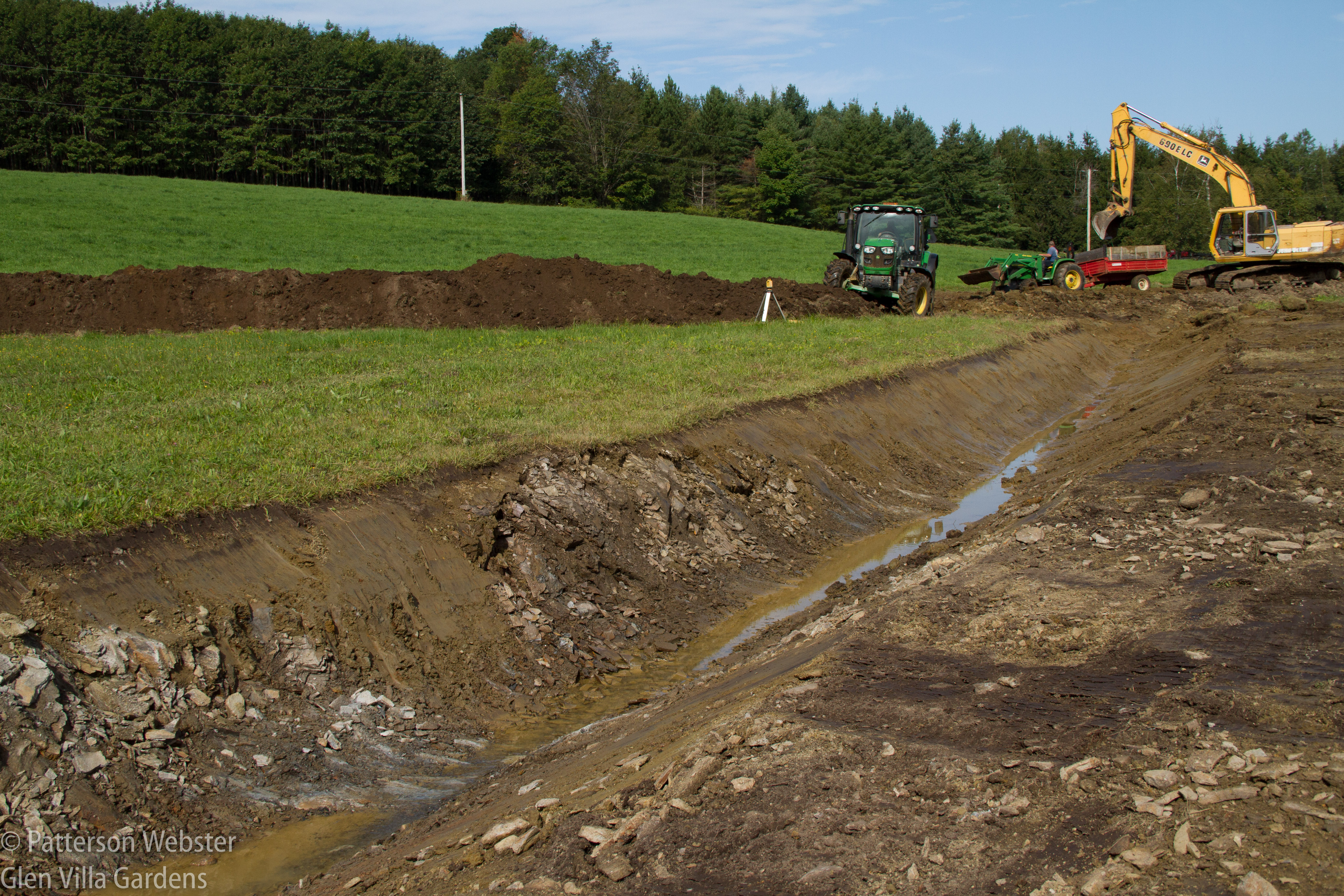 The ditches are deeper on the downhill side of the path than on the uphill side so that water doesn’t accumulate on the path or around the trees.

Neighbours noticed and politely inquired. Were we building a landing strip or a new road? 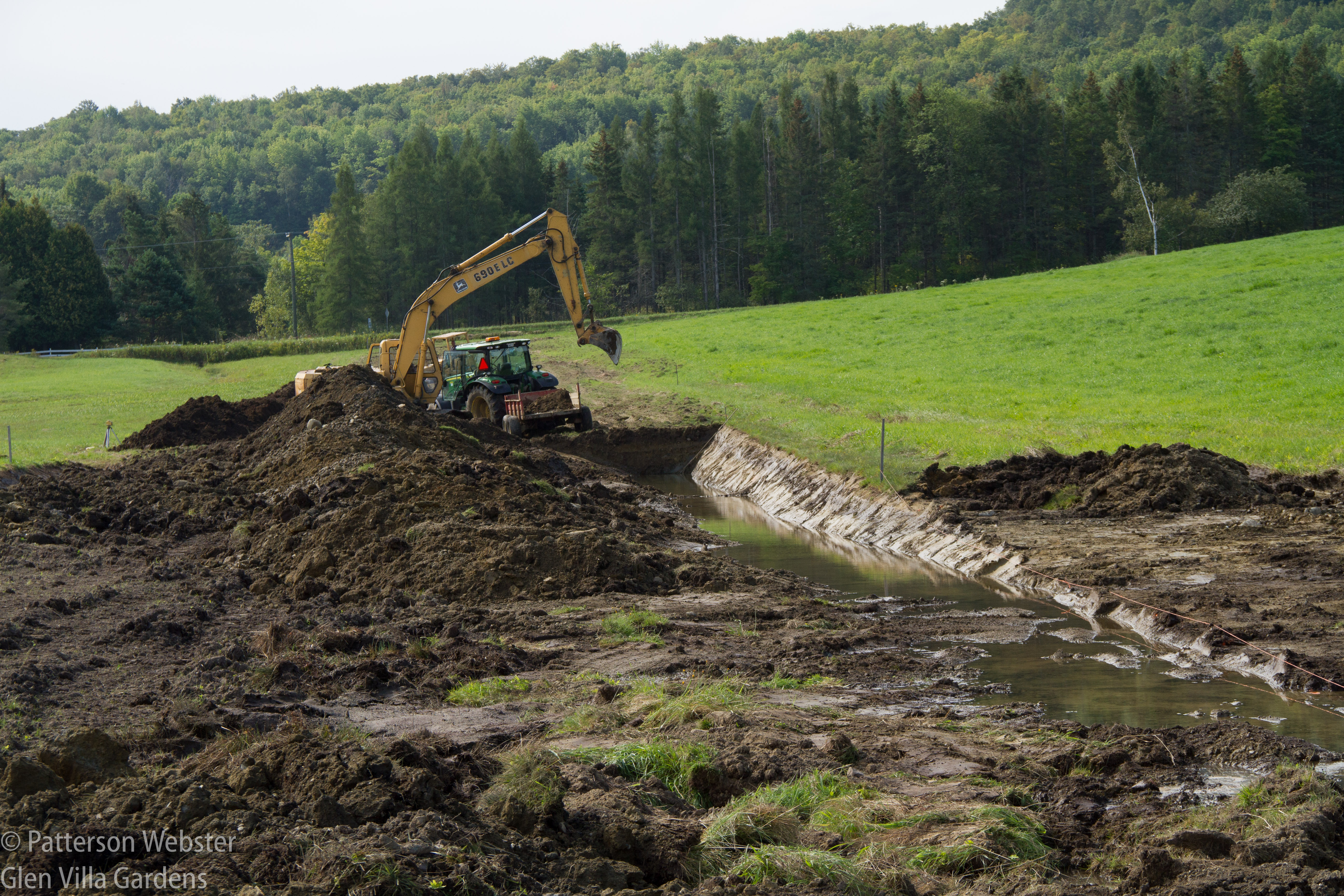 The big mess got messier. But at least it didn’t rain while the work was going on.

Finally, though, the work finished. And then the wait began.

We were ready but the trees were not, which was unfortunate since the weather was ideal  — dry, sunny and cool. And while we were waiting, it started to rain. And it rained, and rained, and rained.  All the holes we’d dug filled with water. And still the trees didn’t arrived.

Until finally, they did. This morning an enormous truck arrived, heavily laden with 124 crabapples and one little willow. 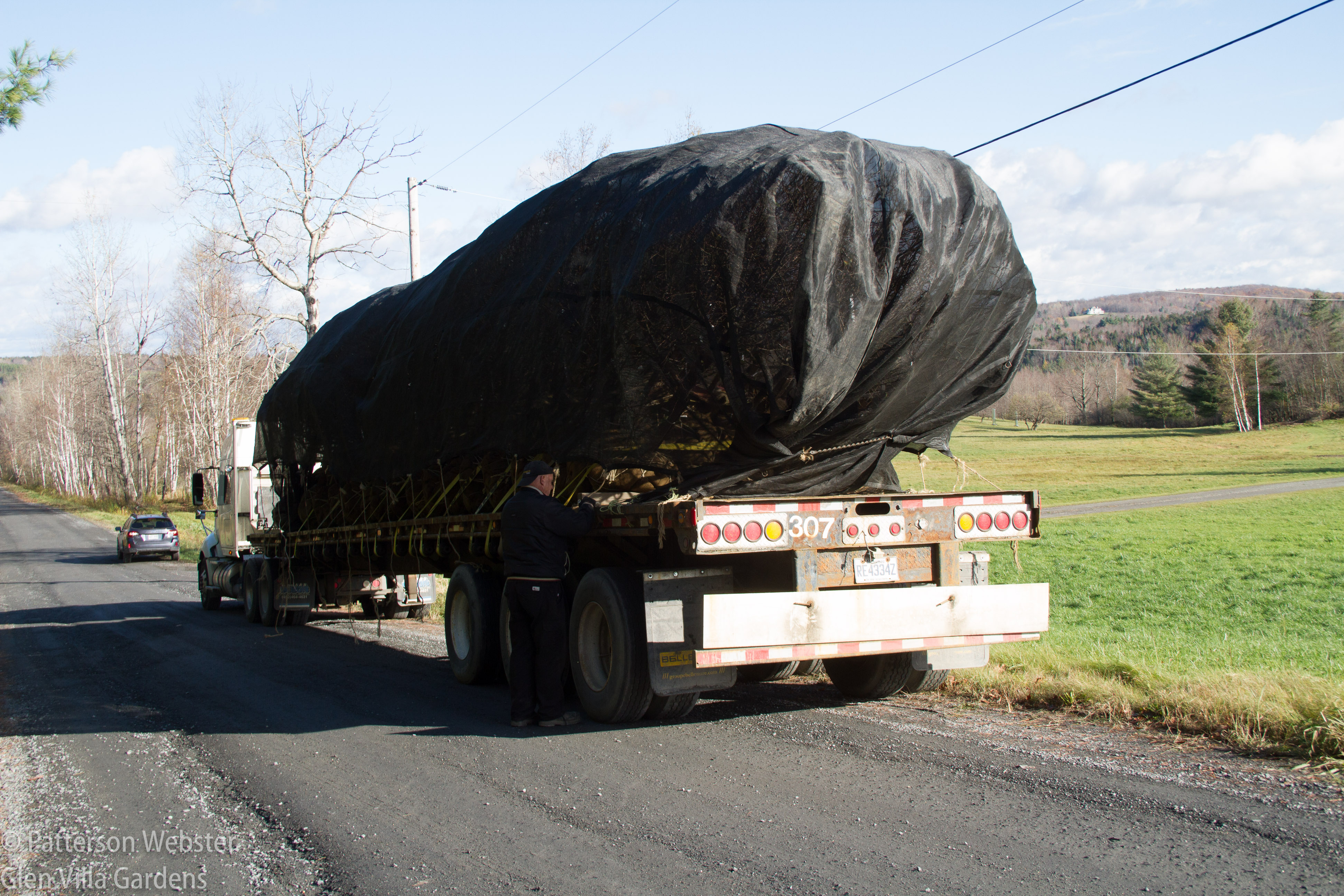 The covering protects the trees from wind damage. Does anyone else think it looks like a very large hair net?

The trees were unloaded beside the road and the planting began. 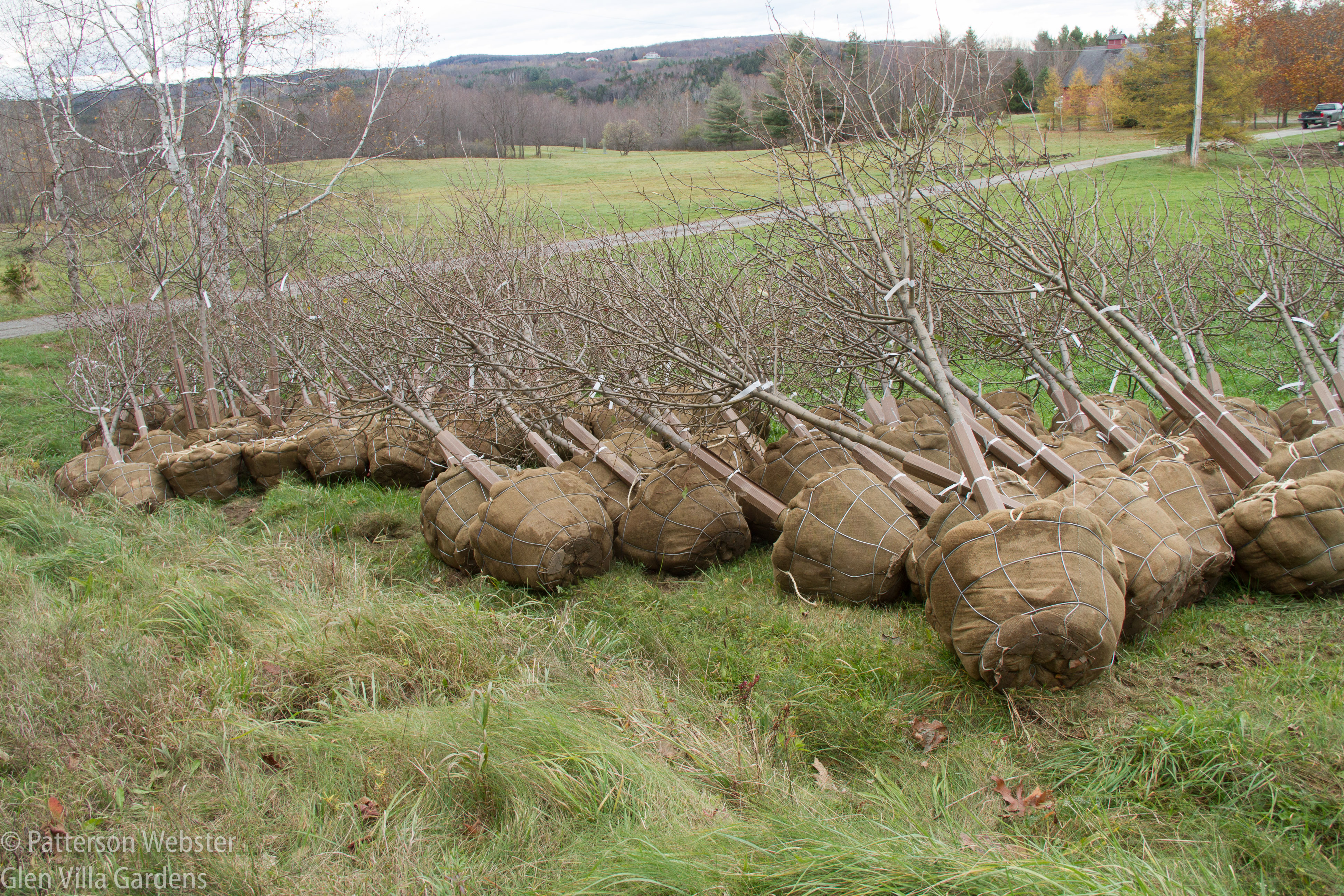 Each tree is enclosed in burlap and held in a wire basket. For transport, each has a thick paper sleeve to protect the trunk.

The trees are heavy so each has to be chained and lifted into a waiting hole. 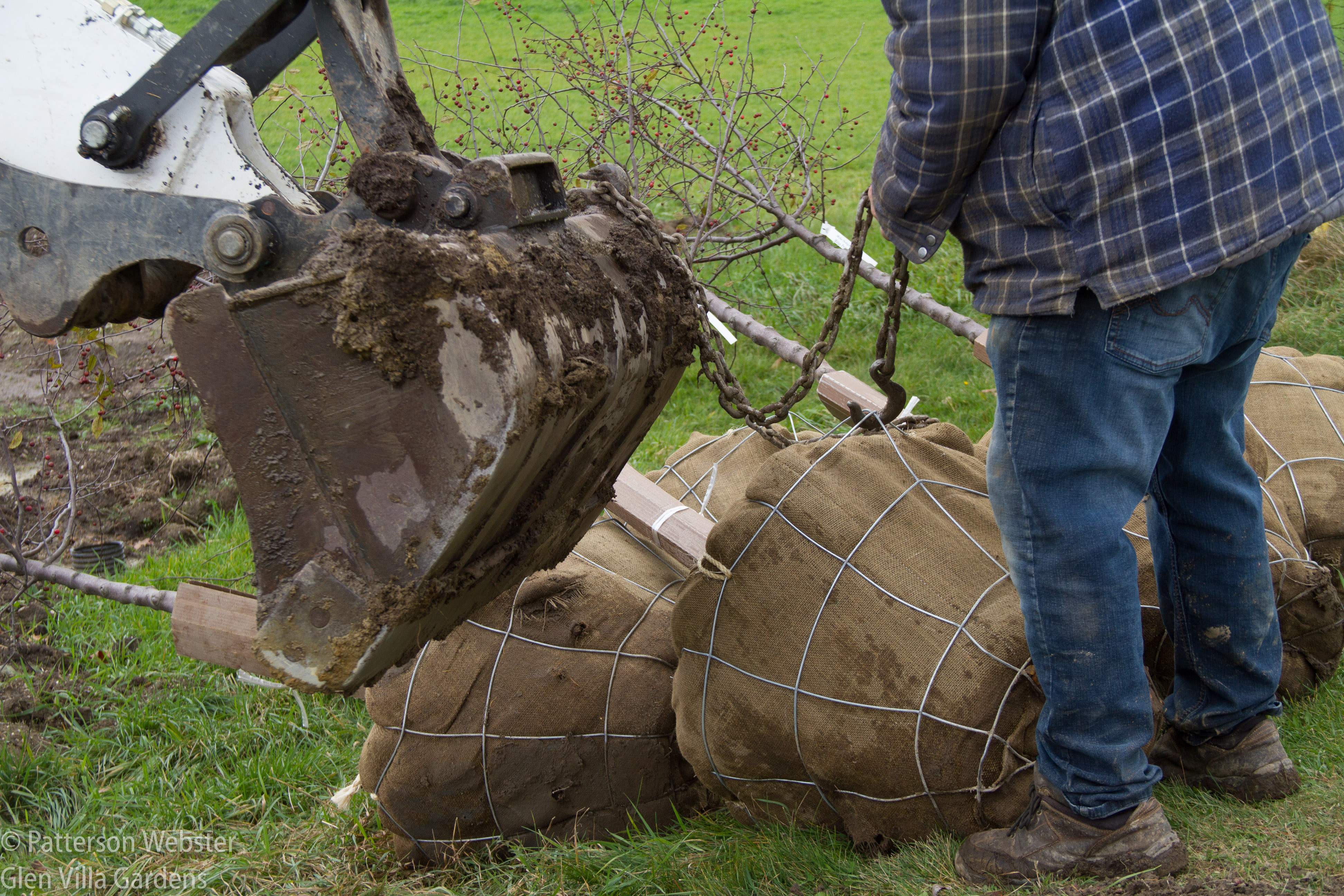 Imagine doing a job like this without mechanical equipment!

Planting will take a full day at least. And before the holes are re-filled with earth, each tree will need to be adjusted to ensure the line is straight. 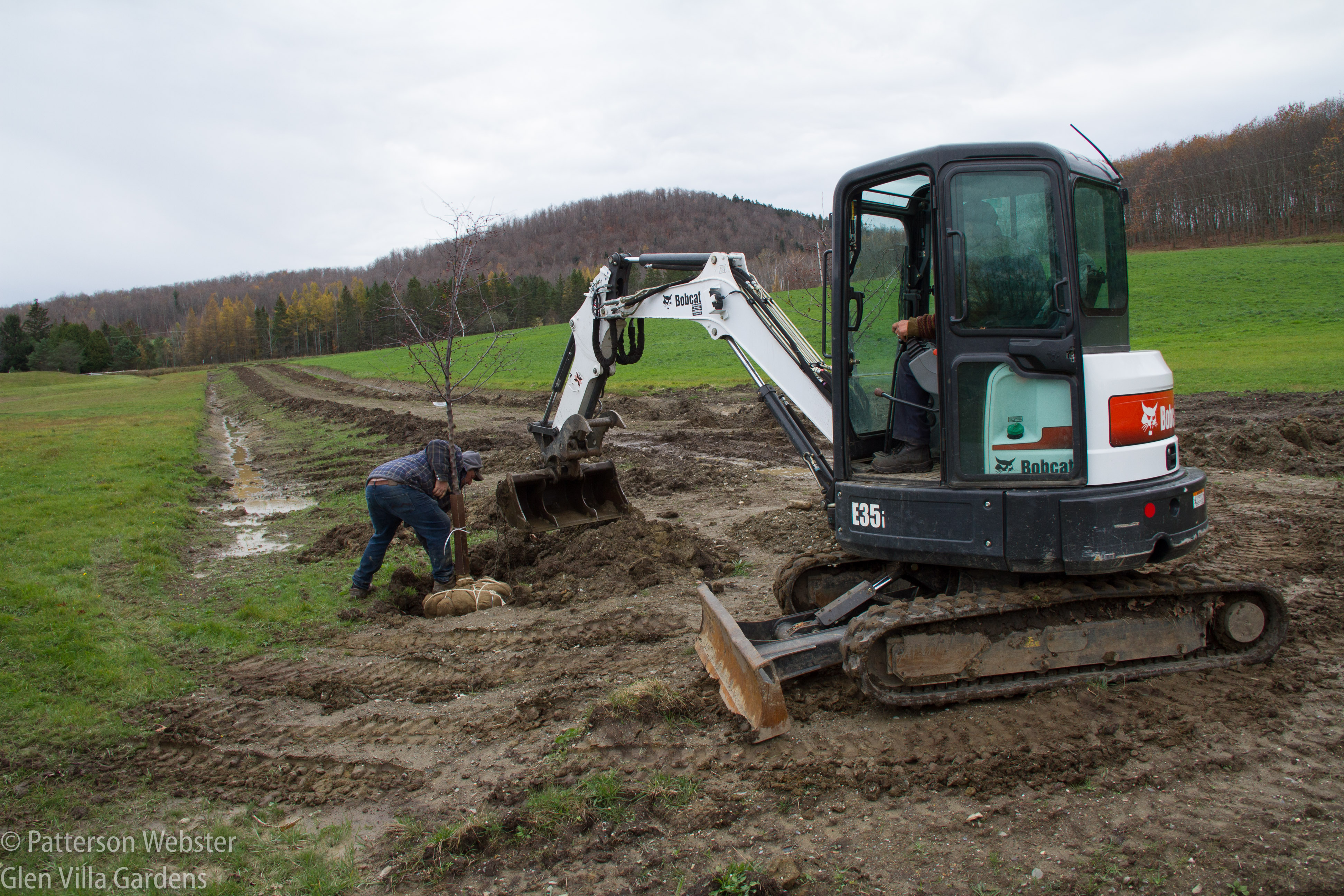 The work site is cold and wet now, making the job messier than it would have been a few weeks ago.

I’ll post a photo once the work is done. I know the trees won’t look like much then, but consider how they’ll look next May!

A final note: Recently, I found a note I made in 2012 after visiting gardens in England. “Use a straight tree line in the garden. But where?”