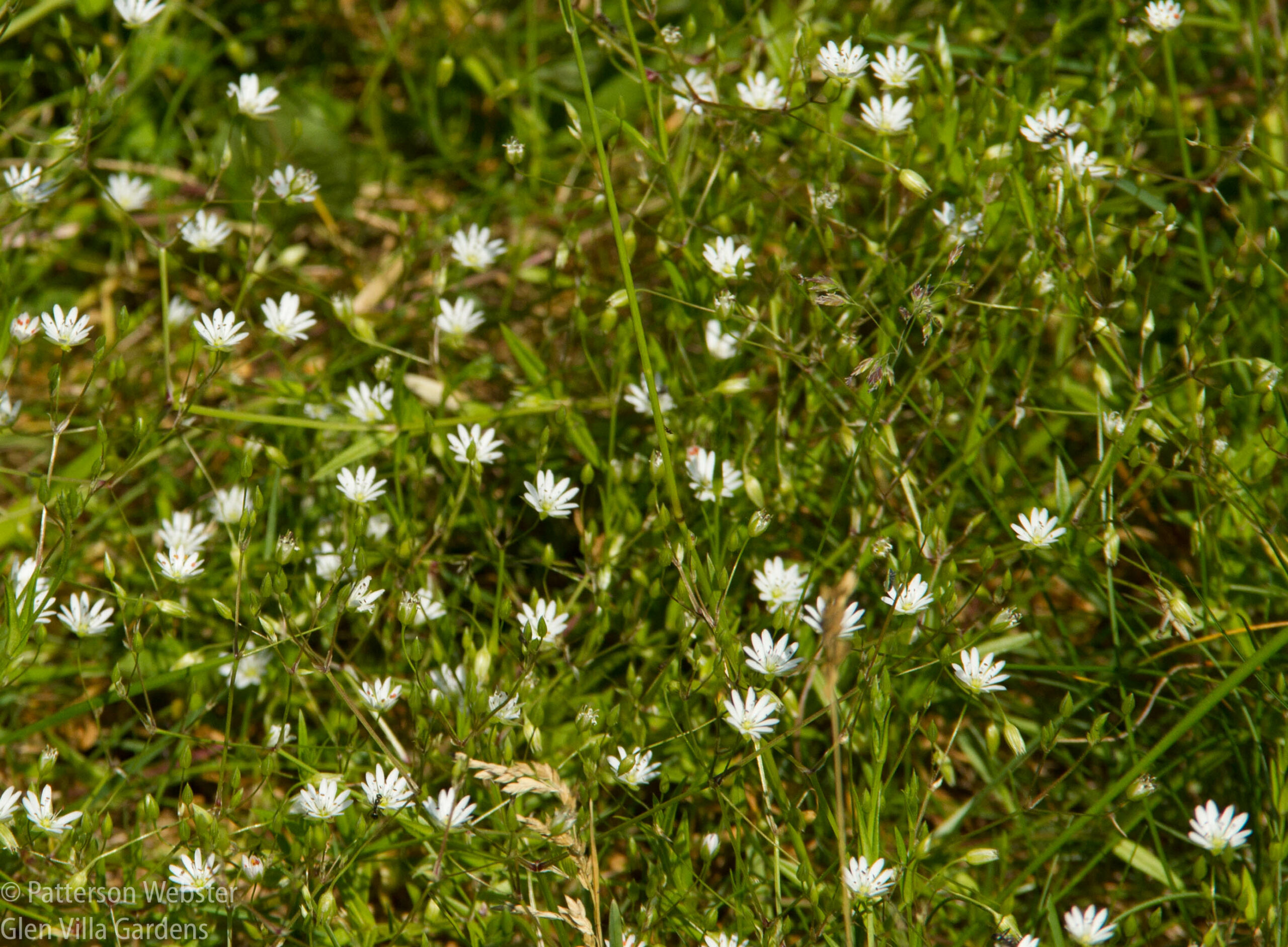 Some wildflowers are called weeds… but often those ‘weeds’ have pretty flowers. Consider crown vetch, for instance. Its purple flowers are lovely from a distance and it is useful as a temporary ground cover to prevent erosion. But it’s also a menace, in some cases covering and shading out native plants.  Chickweed, on the other hand, isn’t a problem, although people who yearn for perfect lawns may disagree. 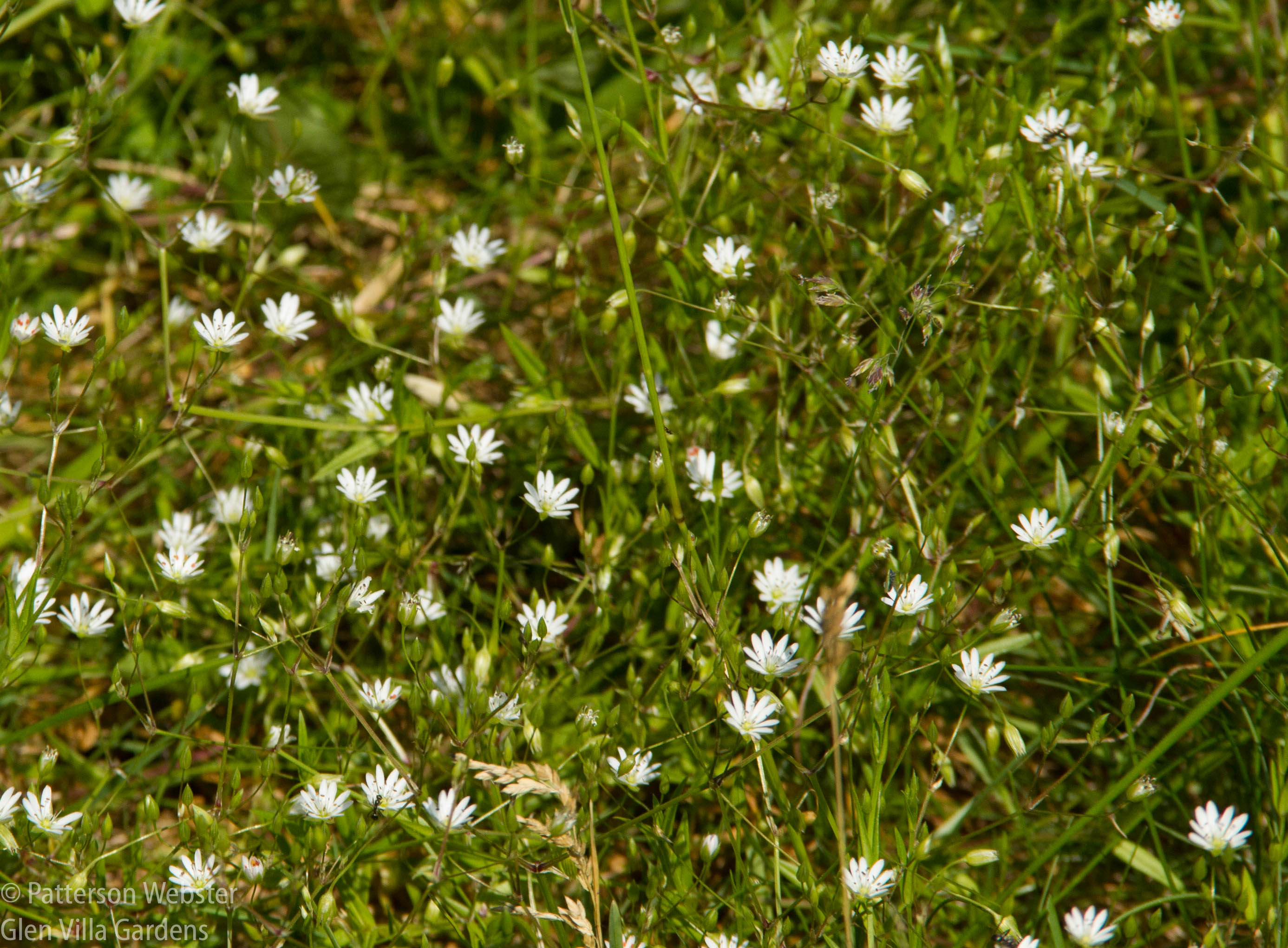 It’s called chickweed because chickens love to eat it. People can too, and its flowers are quite nice.

A few years ago I threw out some seeds of a flower I saw growing alongside a road. It is some form of scabious, I think, and has happily seeded itself all around the Skating Pond in the Upper Field. 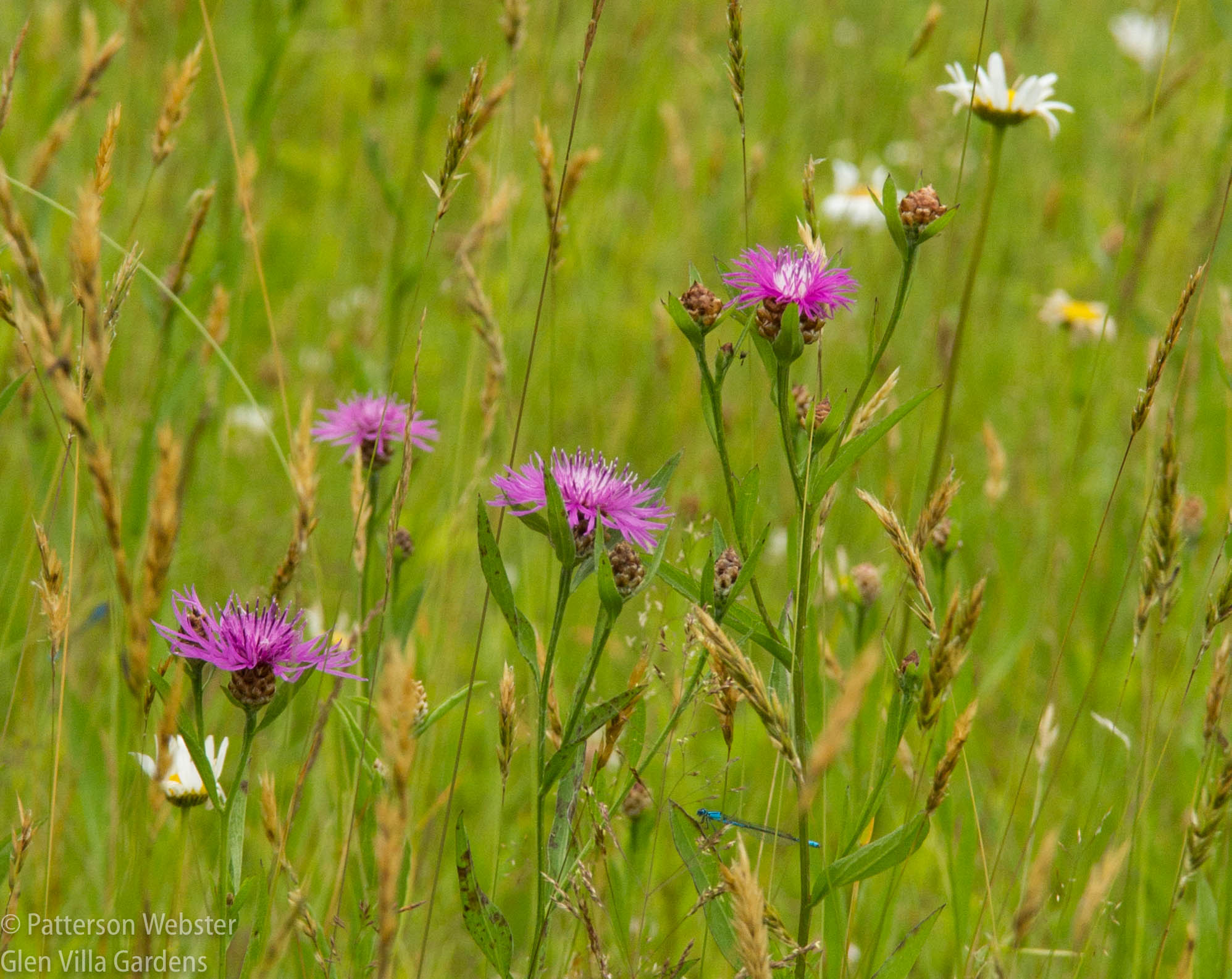 For a wildflower as pretty as this one to seed itself all over a field … how lucky is that!

Some kind of tiny butterfly obviously finds it appealing. 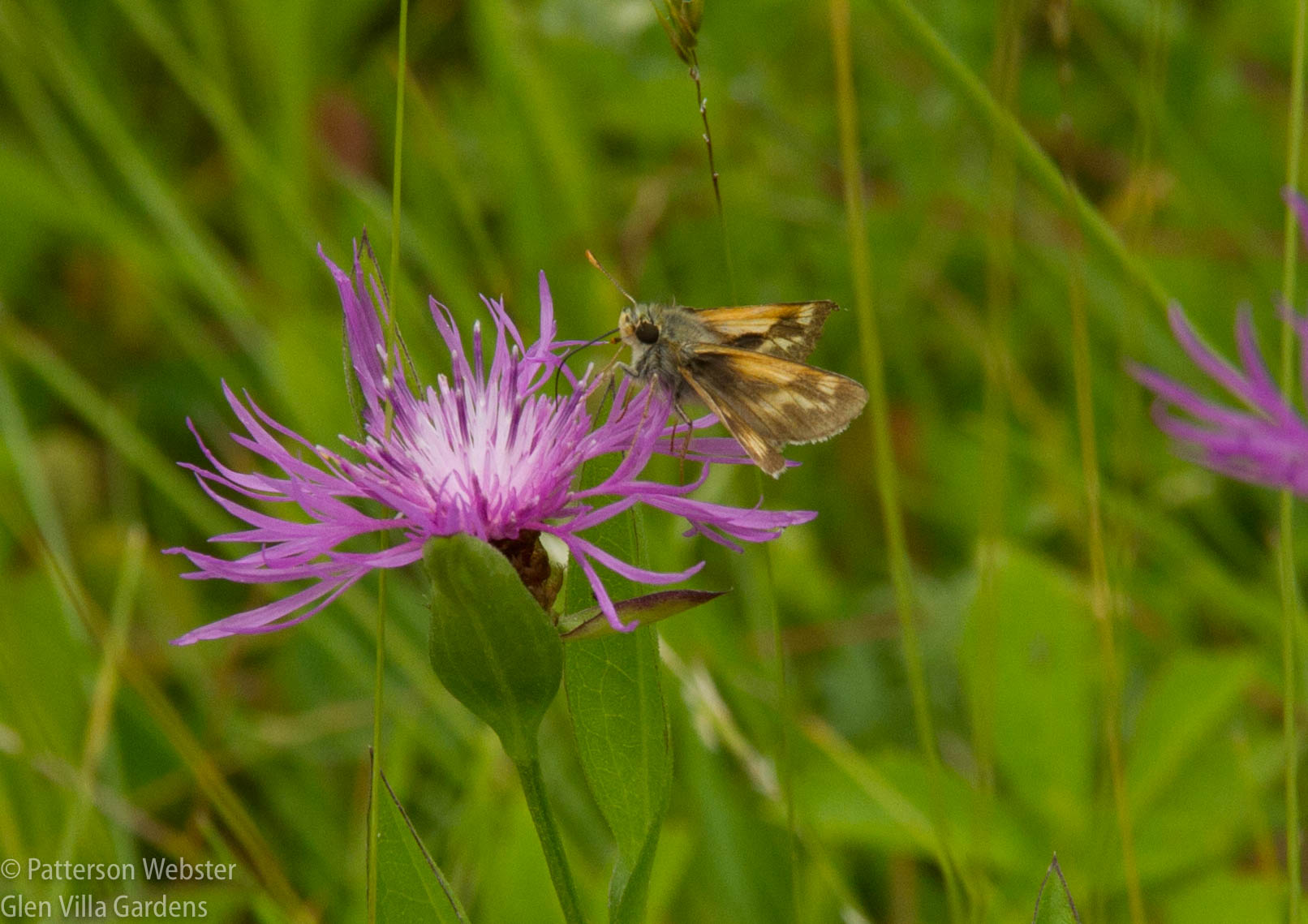 Butterfly or moth? What’s the difference?

Also dismissed as a weed is milkweed (Asclepias syriaca). Yes, it spreads easily which can create problems, but take a look at the flowers — aren’t they pretty enough to make up for that? 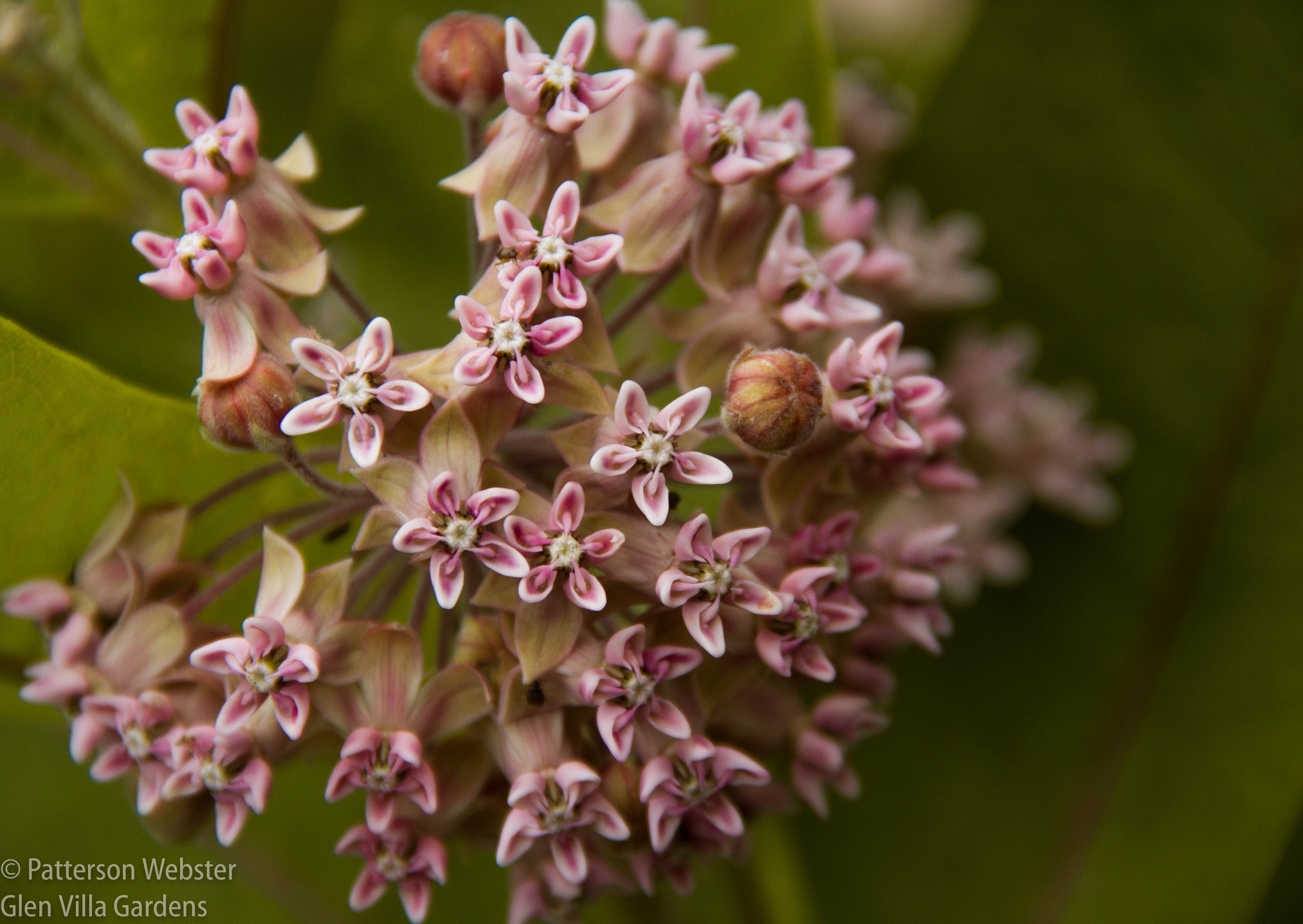 A close up shows the tiny blossoms that make up the slightly pendulous round umbel. There can be as many as 100 flowers on each.

Common milkweed forms large groups by clones, and that is happening in some of the fields at Glen Villa.  I don’t mind, though. The flowers smell good and common milkweed is the host for monarch butterflies as well as being of special value to native, bumble and honey bees. 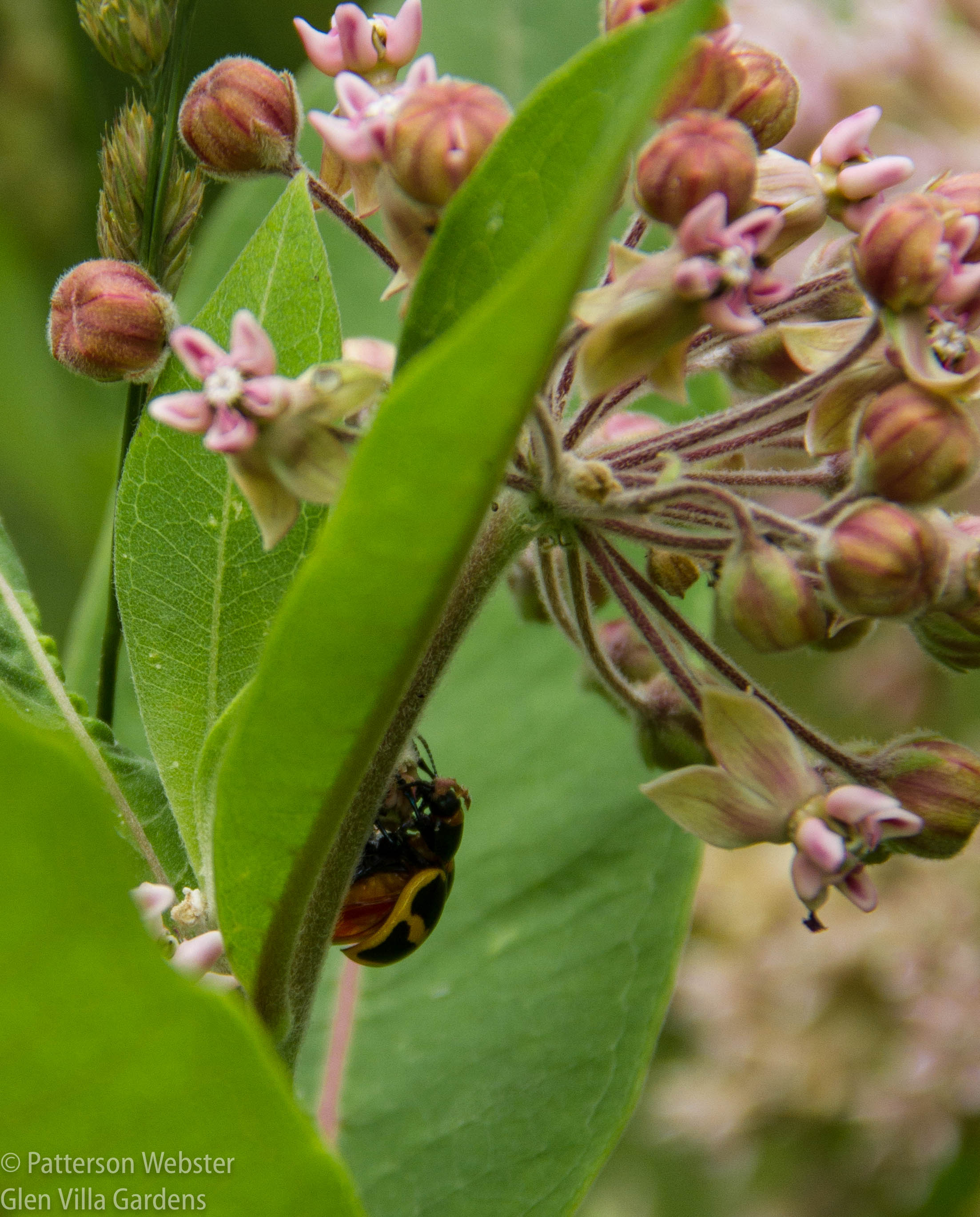 I think the orange and black creature is the milkweed leaf beetle. Not surprising since it seems quite happy on the underside of this leaf. But is it eating something else as well?

It’s obviously attractive to all kinds of wild life. 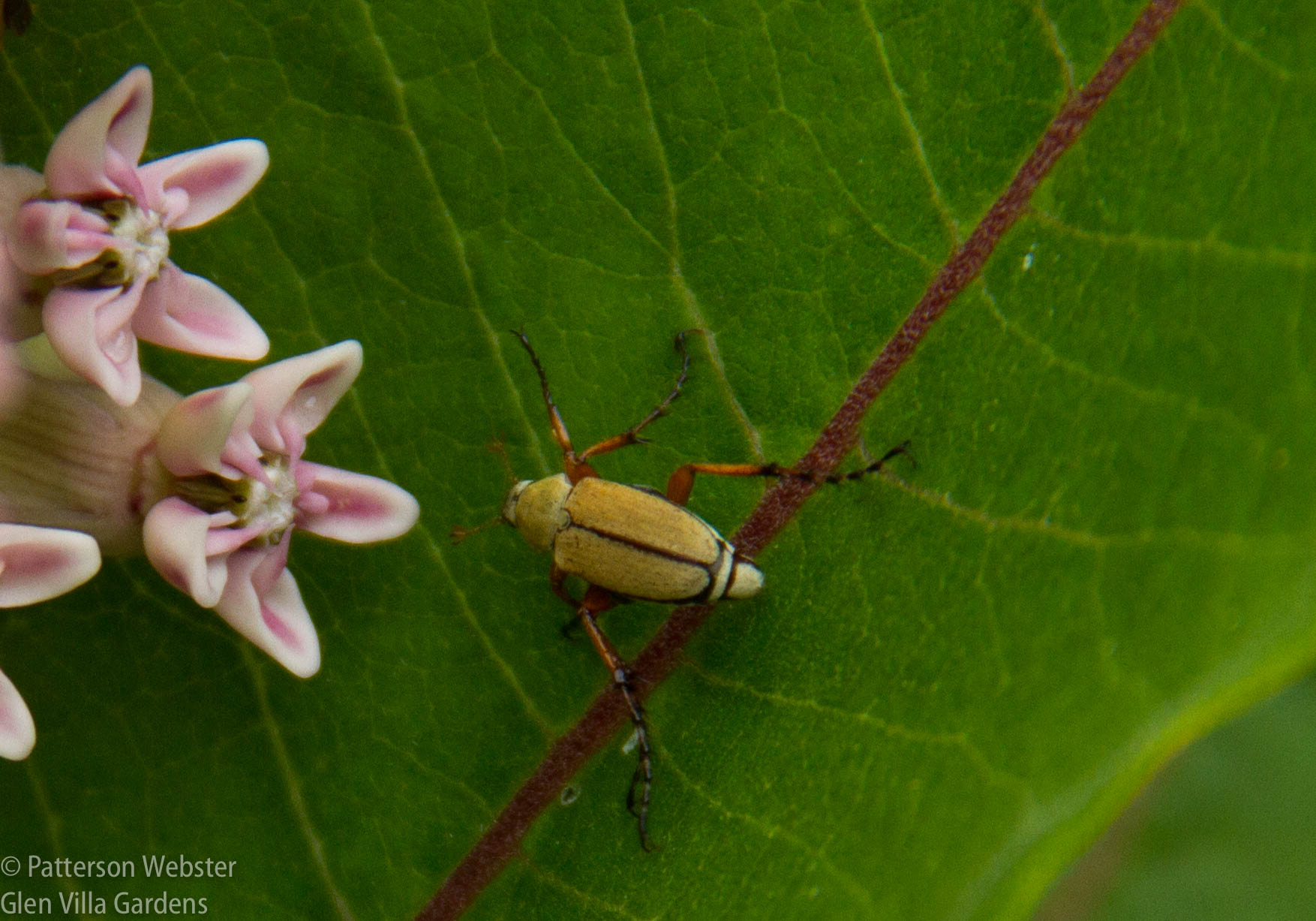 Can someone identify this little guy?

Native Americans used milkweed as a source of fibres, and during the Second World War children in northern states were encouraged to collect the floss for floatation in life vests.  Who knew?

Even stranger, the floss is now being used as insulation for winter coats! According to Wikipedia, the first milkweed insulated winter coat was produced in 2016 in collaboration with Altitude Sports, a Canadian online retailer, Quartz Co., a Canadian brand producing high-quality winter coats, and Monark™, a Quebec-based company cultivating milkweed fibres. 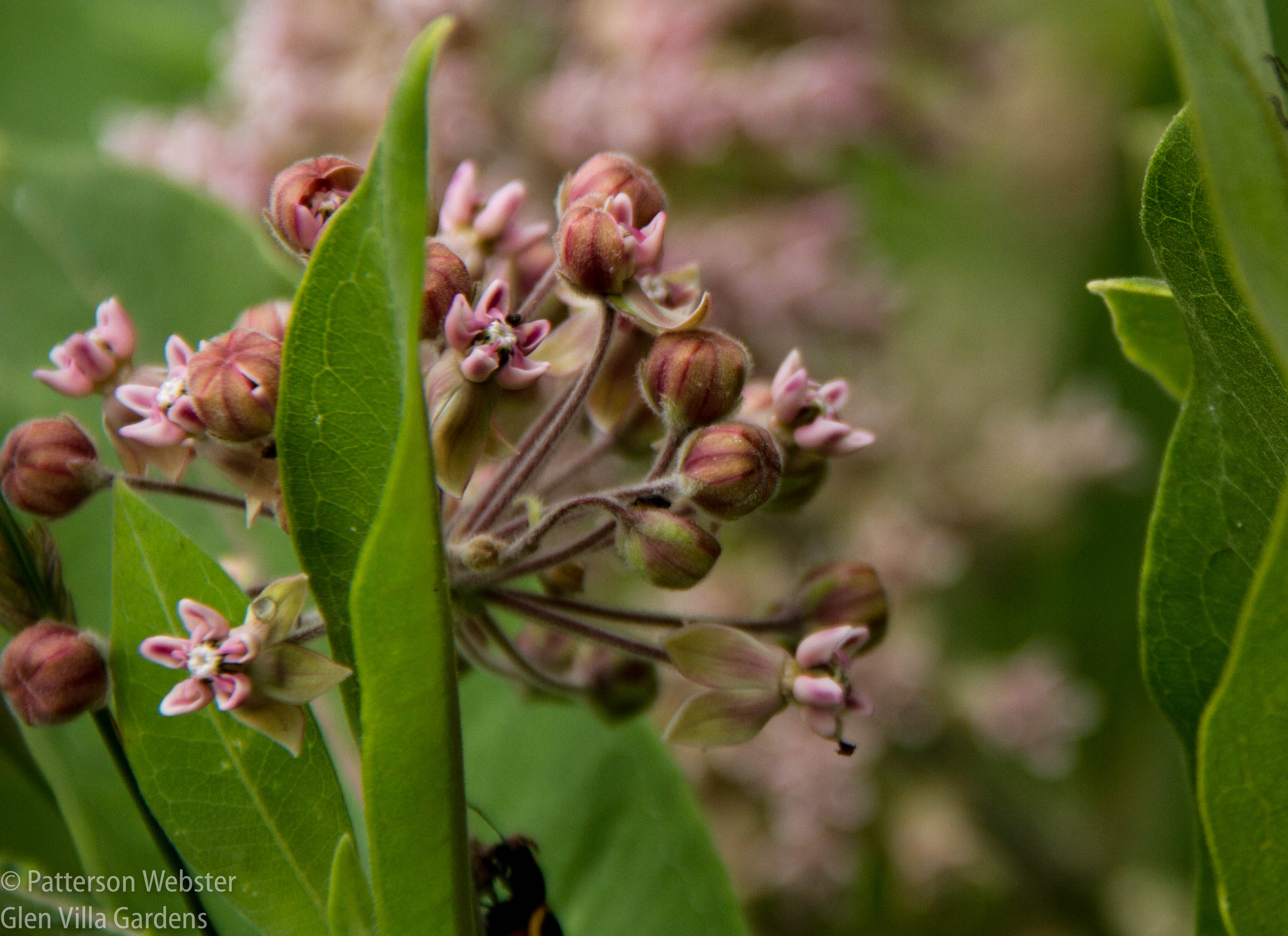 The best way to get an up close and personal look at the milkweed growing at Glen Villa is to visit the garden next Saturday, July 20. On that day only, we are opening the garden to the public as a fundraiser for the Massawippi Foundation and Conservation Trust. Tickets are selling fast so buy yours on line today through  the Massawippi Foundation.

Tickets will be available on site unless all are sold before then.  No dogs and no picnics, please!

Definitely something in common. Your post is much more comprehensive and informative than mine.

Thank you kindly! Could do with some of that scabious kind of thing – love a pretty self seeder that will thrive in grass…. Xx

the name of the flower is either centaurea nigra or jacea beautiful indeed.

Thank you! I’m delighted to know its real name.

The insect is a , sorry it is in french, scarabée du rosier

I think its English name is rose chafer.

Monarch butterflies lay their eggs on just one type of plant, and that’s milkweed (genus Asclepias). Unfortunately, milkweed often has a bad reputation. While awareness is rising around the importance of milkweed (as well as other native plants) for pollinators we want to clear up any misconceptions.

With all the milkweed plants we have growing, we should see lots of monarchs later in the season. I hope so!

I have also found in my field garden a pale yellow , almost white, long flowers which look a orchid type . I will bring a picture of it on my visit to your open Garden this Saturday. It will fit perfectly in your article.

It may well be an orchid, Michiko. I have something similar growing but didn’t have a good photo of it.

So glad to know that you are coming on Saturday!

Milkweed used to be viewed as a nuisance plant of vacant lots and empty fields. I’ve noticed more and more that it is being incorporated into home gardens, which I consider progress.

I agree, Jason. It’s an unruly plant that reminds me of a gangly teenager — leaves a bit too coarse for the size of the flowers — but any disadvantage is overweighed, I think, by its wildlife value.

This was a timely visit to your blog. I noticed lots of tiny white flowers blooming in my clover path among the clover and didn’t know what they were. Now I do: chickweed; thanks for the ID. I also saw one of those milkweed beetles in my garden today (although possibly not on milkweed). I have both common milkweed and the more refined butterfly weed (Asclepias tuberosa) growing in my garden. Both have monarch caterpillars feeding on them, and I’m happy to edit out the common milkweed where I don’t want it. I agree that its flowers are beautiful, and you didn’t even mention the lovely vanilla fragrance.

I guess my sniffer wasn’t working, Jean, because the scent is unmistakeable. And quite lovely.