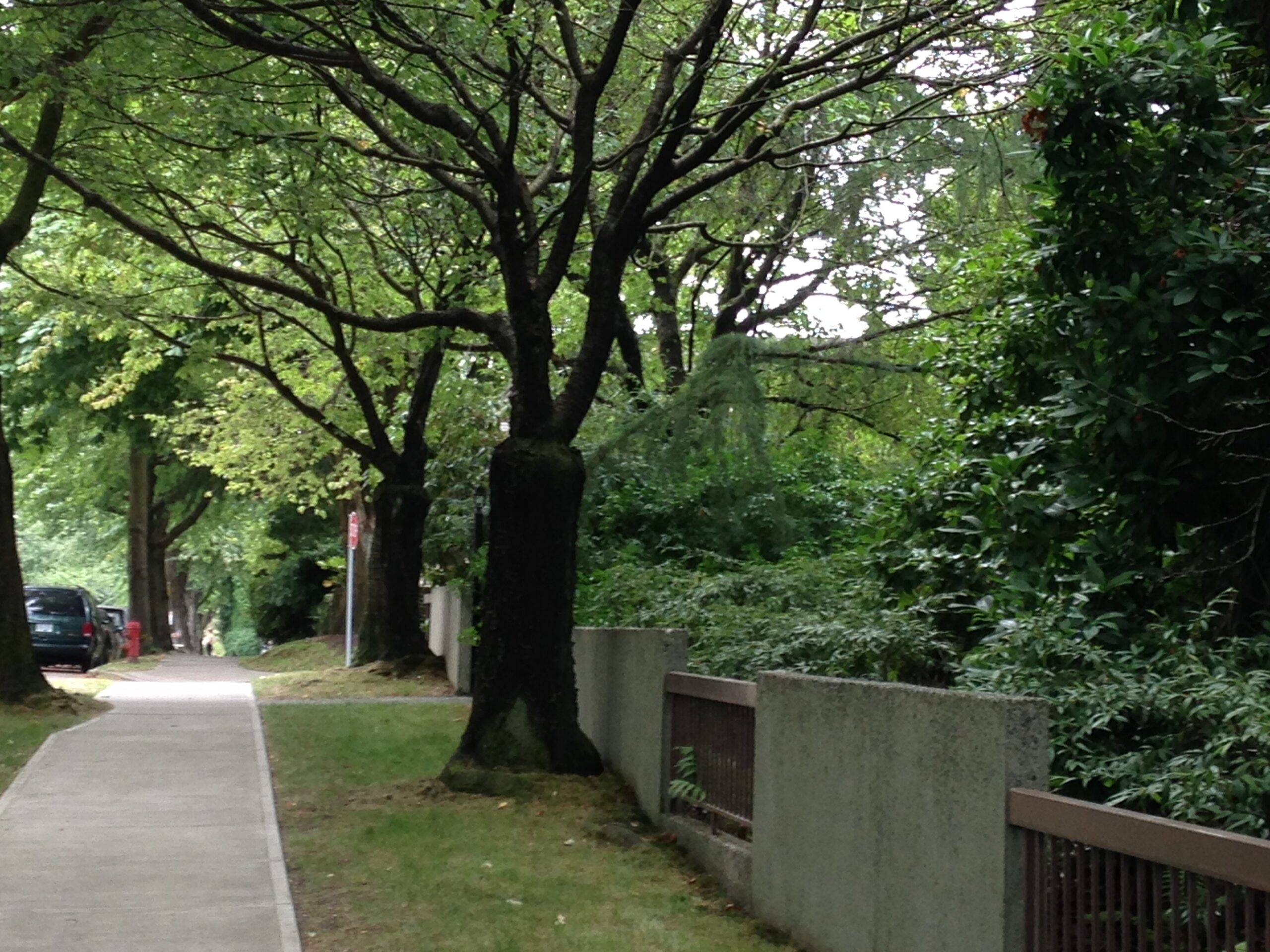 I’m on my way back to Quebec now, after five days in Vancouver. It’s been a terrific trip. The weather has been spectacular and the opening of my exhibition, Clichés to Live By, was a huge success — lots of people of all ages and lots of positive feedback.

Along with visits to the Winsor Gallery to see the show, I’ve been walking around Kitsilano, the area of Vancouver where I stayed. ‘Kits’ was named after a Squamish chief, August Jack Khatsahlano. Once it was a dense wildlife-filled forest; now Craftsman-style houses line the shady streets. 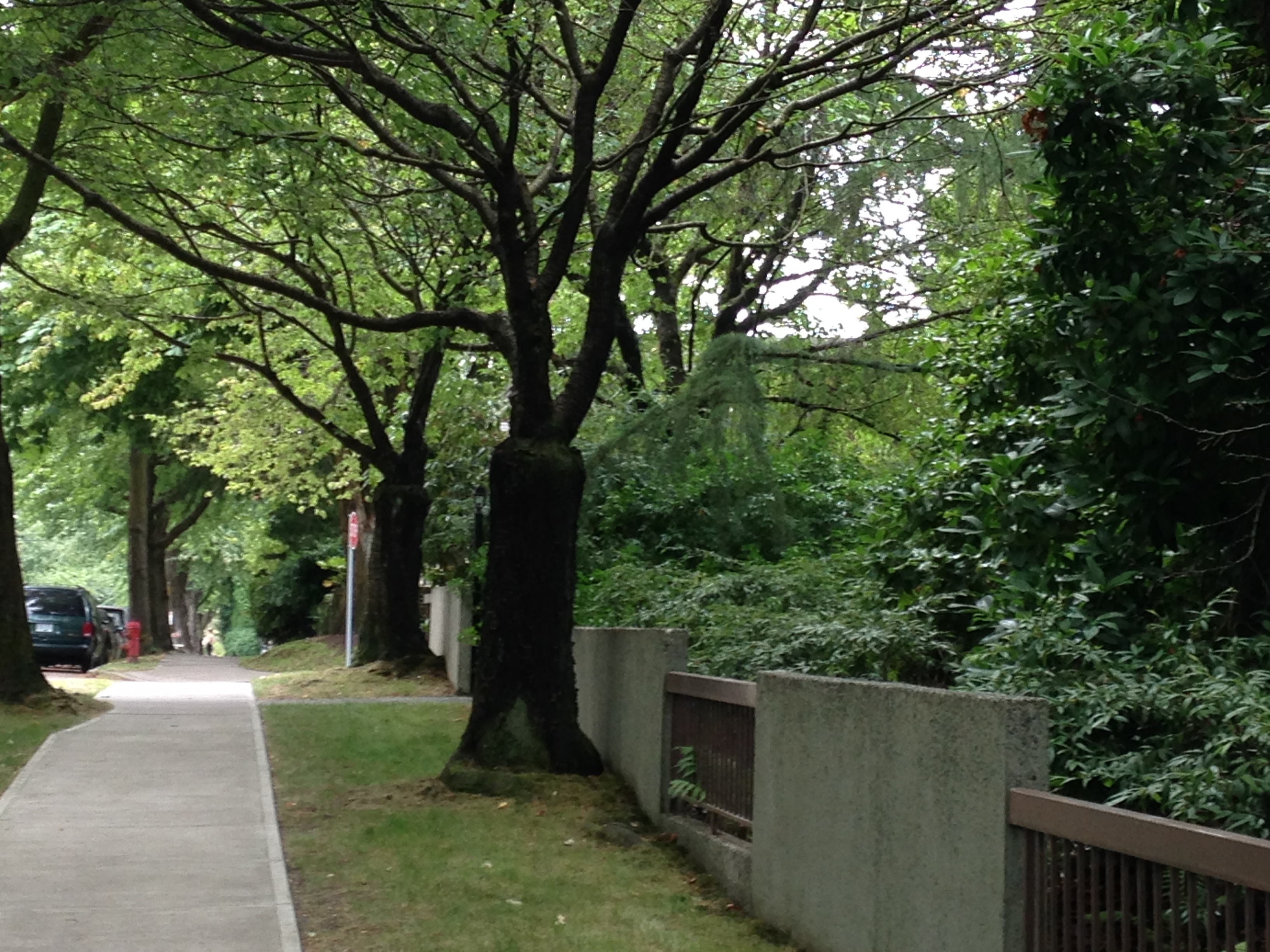 In Vancouver’s temperate climate, gardens grow more lushly and more vigorously than they can in my garden in Quebec. In full bloom everywhere were the blue hydrangeas I’d like to grow but can’t, not because of soil conditions (they require an acid soil; the pink ones need an alkaline soil)  but because the temperature drops too low in winter. 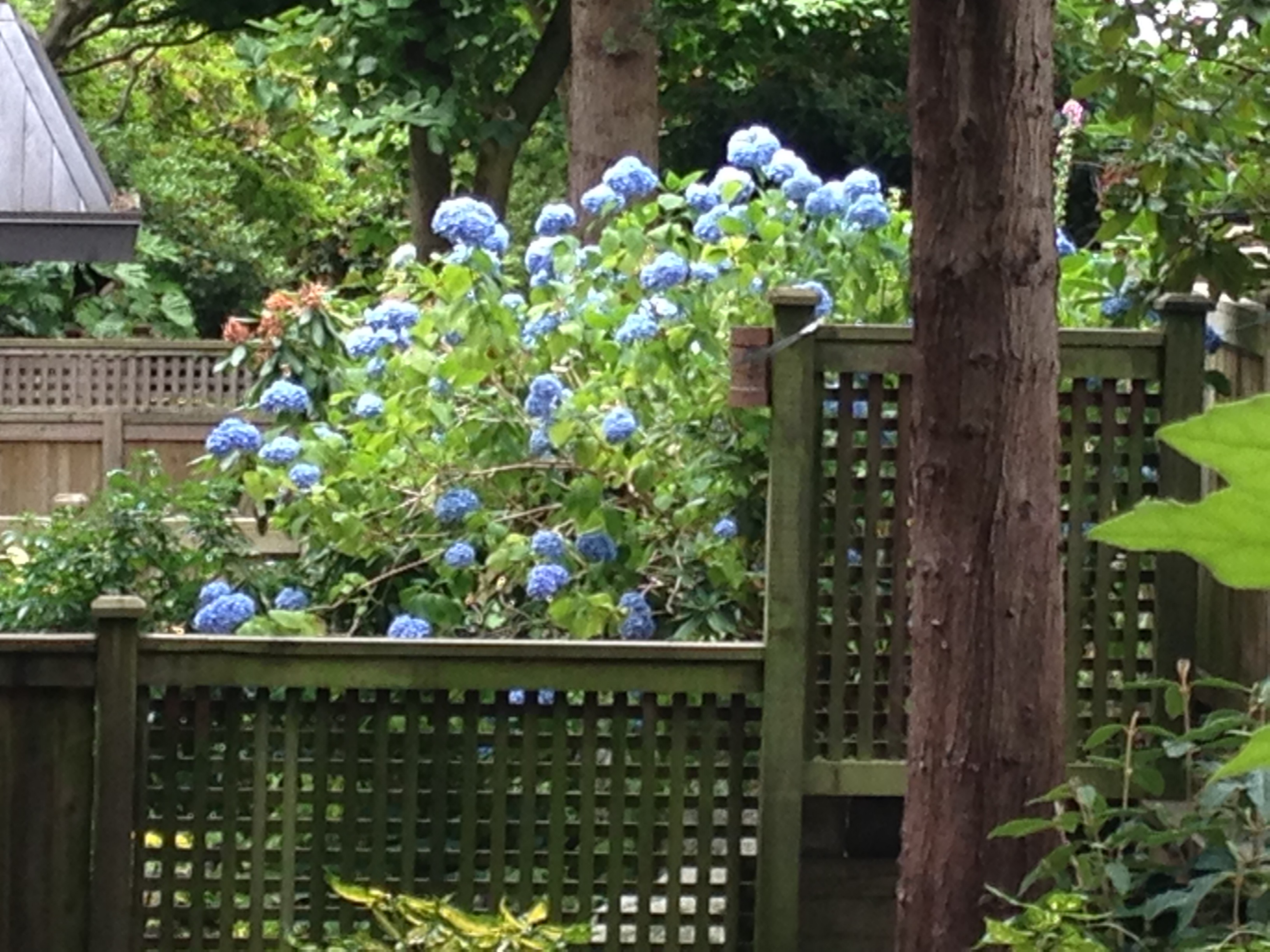 I photographed this hydrangea across several fences with my old I-phone so the quality isn’t as good as I’d like. But you get the idea.

Hydrangea macrophylla like these are native to Japan, and many gardens in Kitsilano — and in Vancouver generally — attest to an affinity in growing conditions between the west coast of Canada and the large areas of the countries across the Pacific.  Many gardens have a vaguely Japanese aesthetic, with rocks and well-pruned trees. 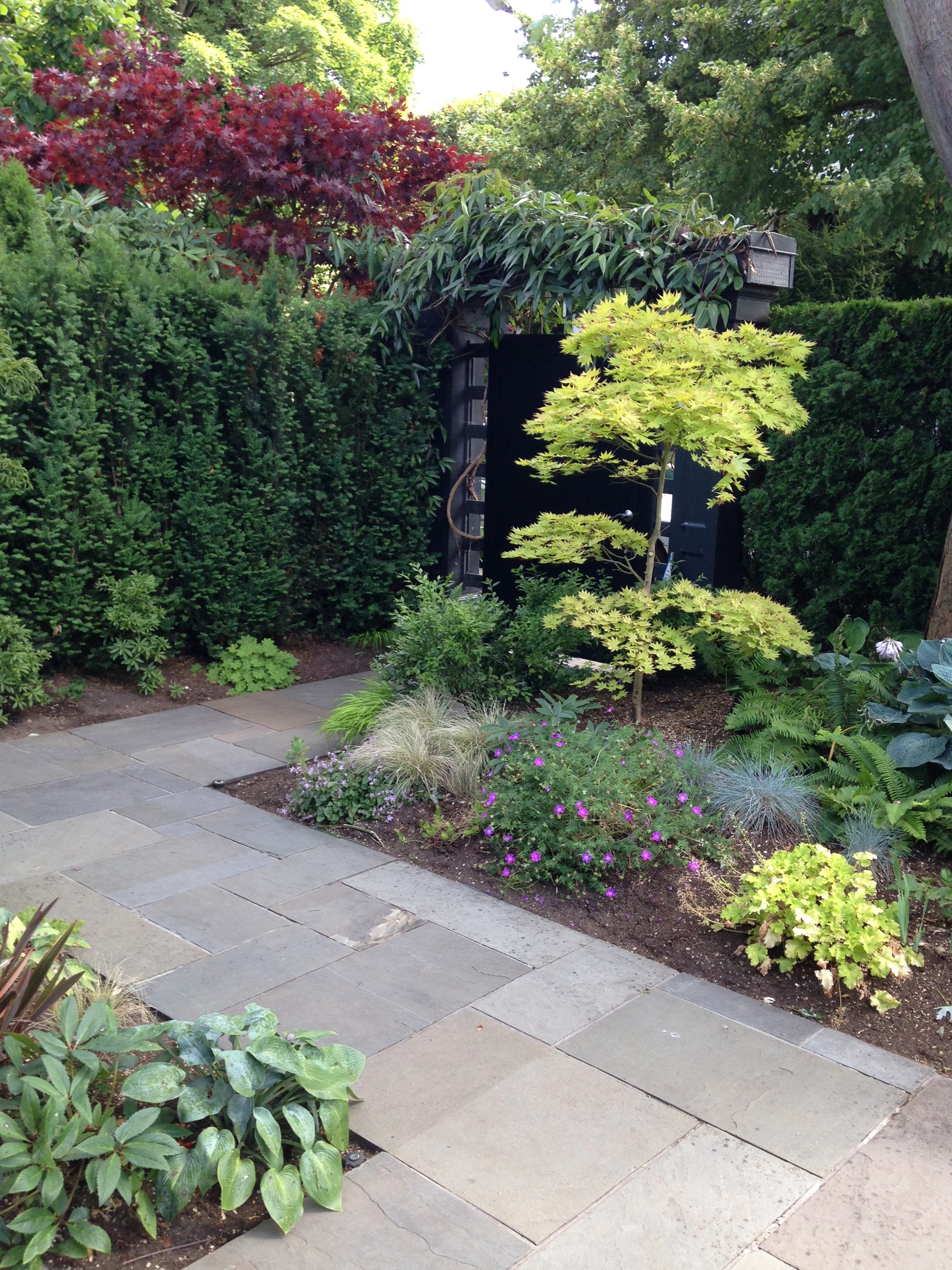 This Japanese maple is in my brother-in-law’s garden, a beautifully cool and shady spot.

Walking around, I saw lots of nicely-arranged planters, including these beside my brother-in-law’s front door. 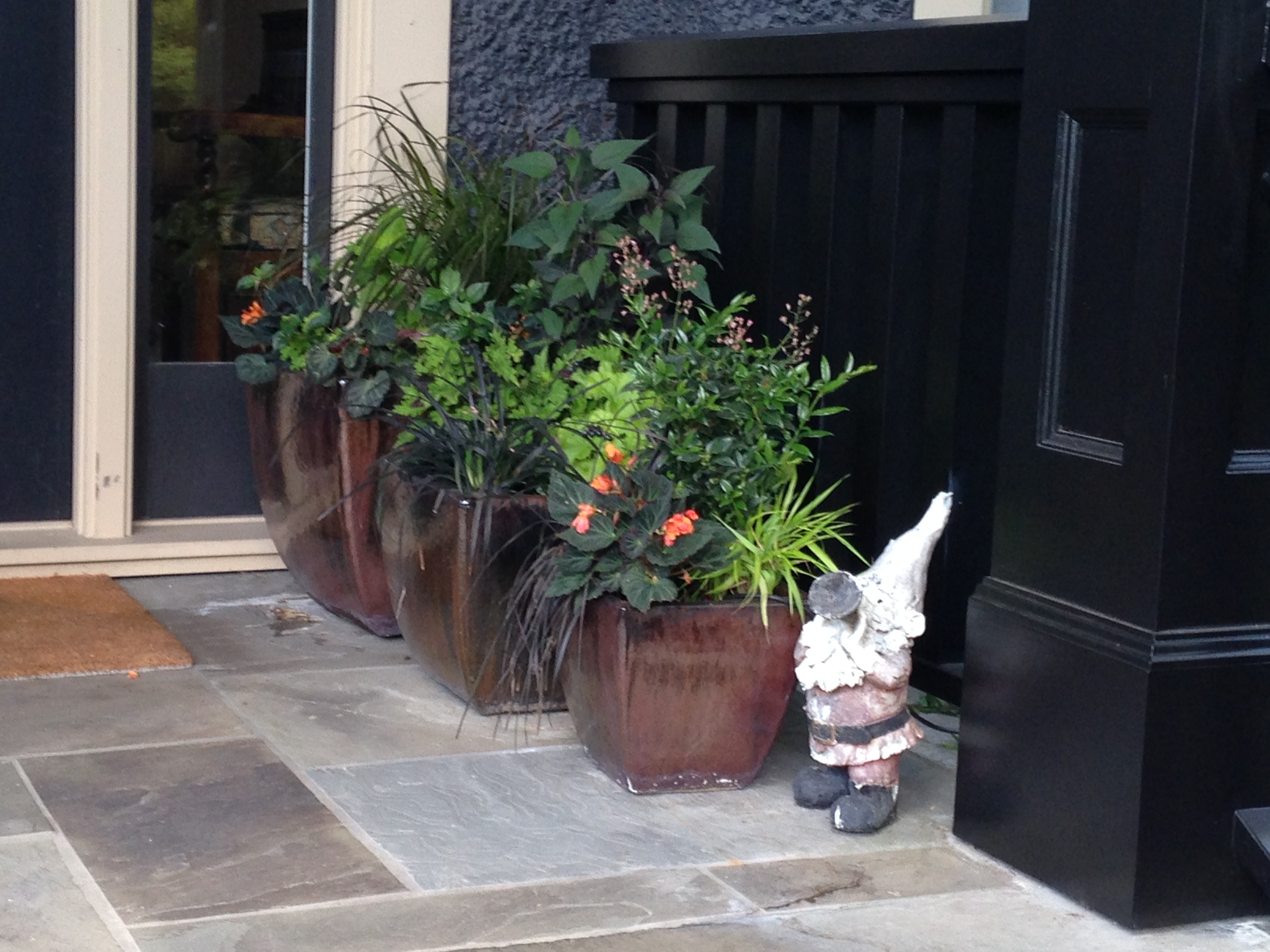 Is this garden gnome a plus or a minus? You decide.

But not all gardens are as peaceful as his. I passed some in my walks that displayed distressingly common faults. Straight-line planting, for instance, seems to be making a come-back, in Kits at least. 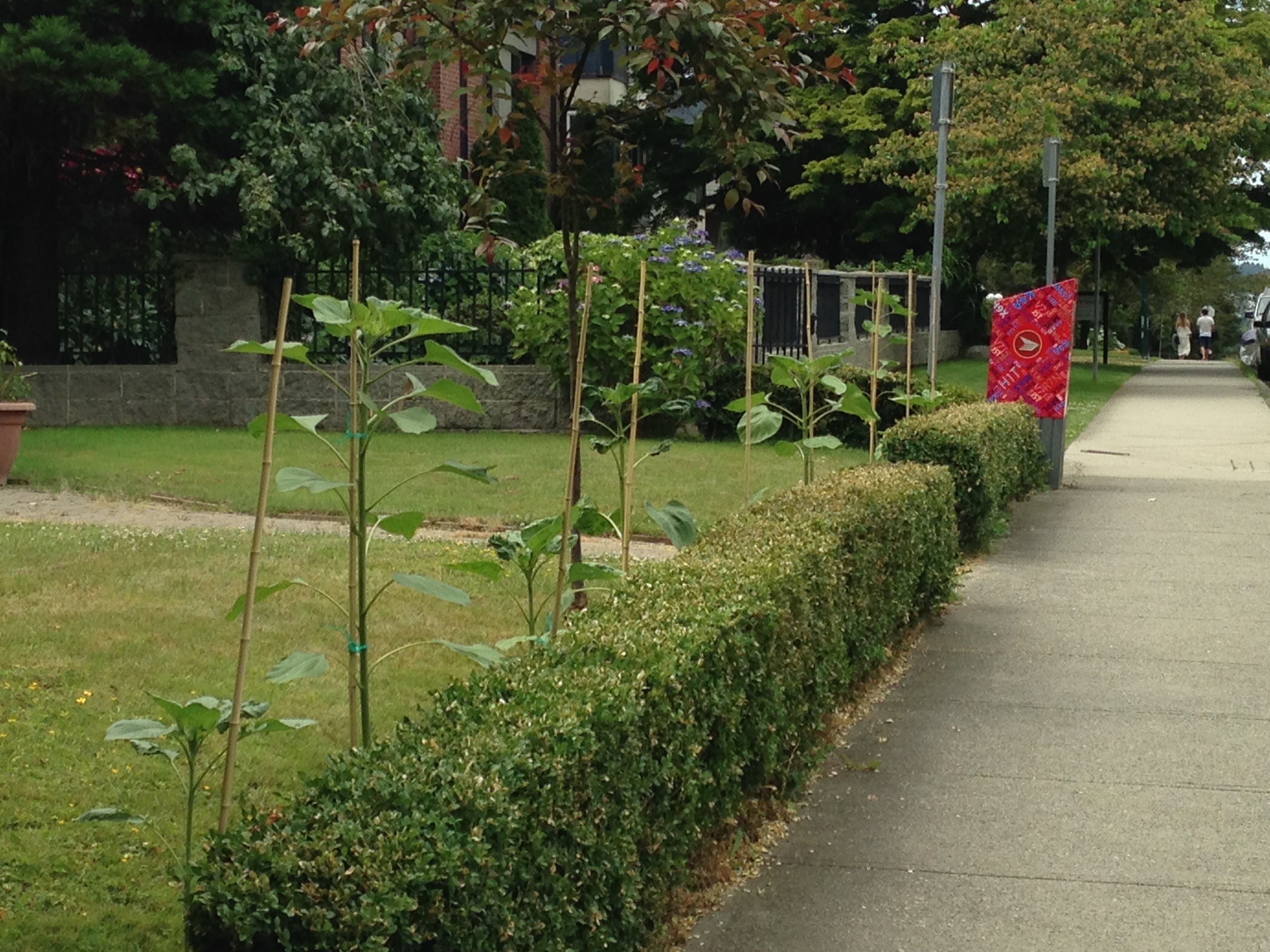 Would you like to look at these staked plants all summer long? I know I wouldn’t.

For me, these straight lines emphasize how even an attractive plant can be shown to disadvantage when the conditions are right (or should I say wrong?). 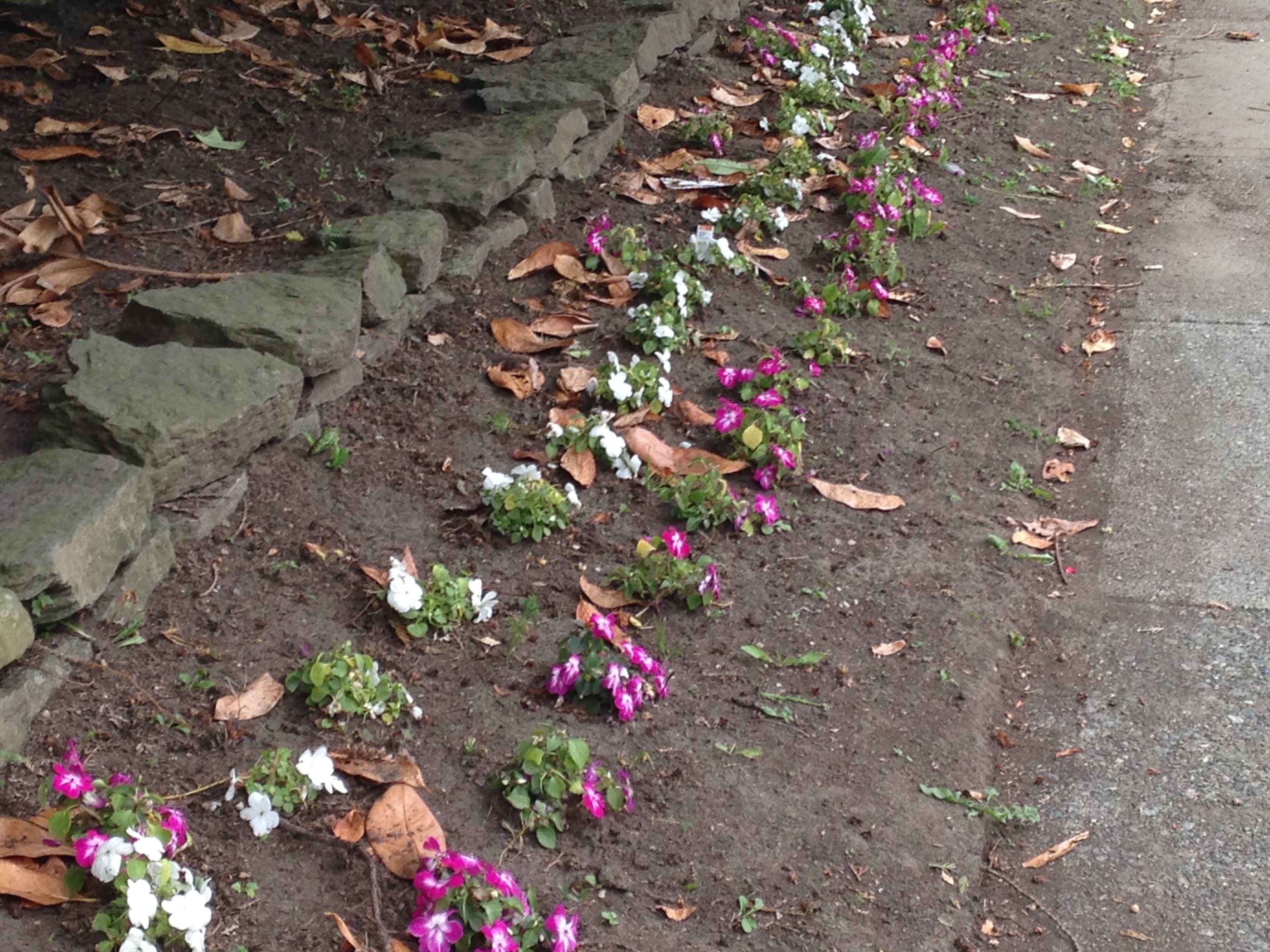 Impatiens in neat rows sticking out of bare soil: ugh!

Generally, though, the gardens I’ve seen over fences and behind hedges have been a treat.  I can even admit a touch of envy… who wouldn’t want to live where growing conditions like these allow sweet peas to tumble carelessly? 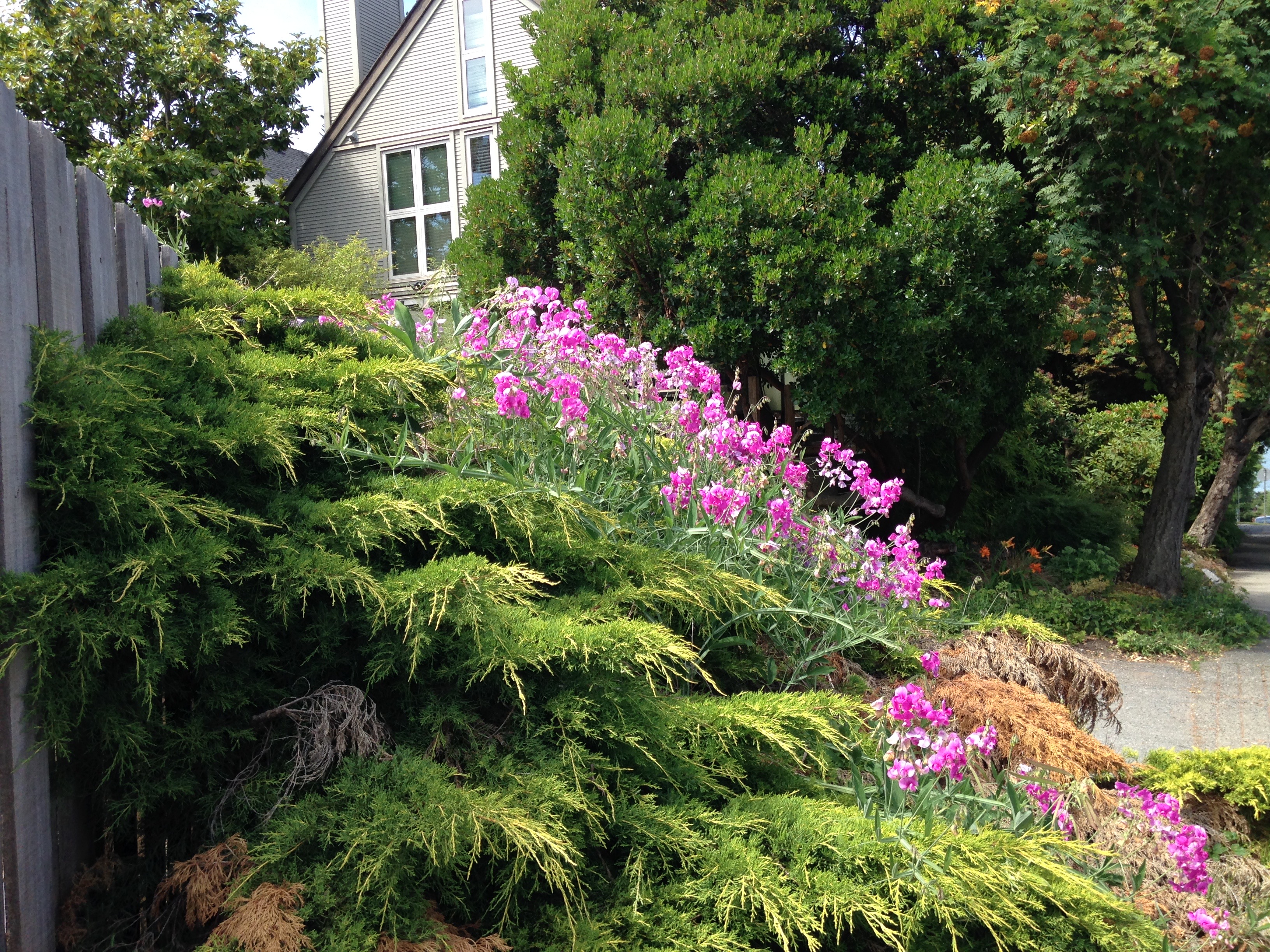 Pruning the dead branches would enhance the effect of the sweet peas. But even unpruned, the combo caught my eye.

What about you? Have you seen any garden horrors recently? Or better, any garden delights?

Oh yes, garden horrors all the time – ha! But mostly I keep my eyes open for moments of garden beauty, and there are plenty of those too. I’m recently returned from the Capital Region Garden Bloggers Fling, and the gardens we toured were lovely, mainly the personal gardens of designers who love to play with plants and art. Pam/Digging: penick.net

I try to close my eyes to the horrors but sometimes it is impossible! But like you, Pam, I’d rather pay attention to the beauty.

Pat, have you visited the Nitobe Memorial Garden in Vancouver yet? It’s a lovely Japanese garden which is part of the UBC Botanical Garden. Well worth the visit. We visited a few years ago, and put a slide show on our blog (Toronto Gardens – yes, we do take liberties and talk about garden travel sometimes) along with some info links.

A few years ago I peered through the gate but I haven’t been inside. I meant to go this trip but it just didn’t happen. So next time, maybe.

It strikes me that it’s the architecture rather than the plants and the garden design that show where you are.

Architecture can be important in showing you where you are, I agree, but not in all countries or regions. Many suburban developments in North America could be picked up and put somewhere else and you’d never notice the difference. Plants can only grow where the conditions meet their needs. That’s why I come home from England — and Vancouver — with plant envy!

Definitely envious of the growing conditions when I visited Vancouver. Nitobe is our favorite Japanese garden. Perfect size and plantings and usually not many visitors, so it offers a very thoughtful and sesual experience.

You are making me sadder than ever that i didn’t find time to visit Nitobe.

Oh, those poor Impatiens. Someone put them out of their misery.

I was tempted, I admit.

I think all gnomes should be banned from all gardens. Straight line planting should be prohibited as well!

Gnomes, maybe, maybe not. Straight lines — not like those impatiens. But I love straight lines in some places.

Some gardens are great but most I find are just over grown generally speaking around town and here in Victoria too. It just all grows in a clump! Hope you exhibit is going well!

Yes, the exhibit is going really well. I’m pleased with the response. I’m now asking myself what is next!