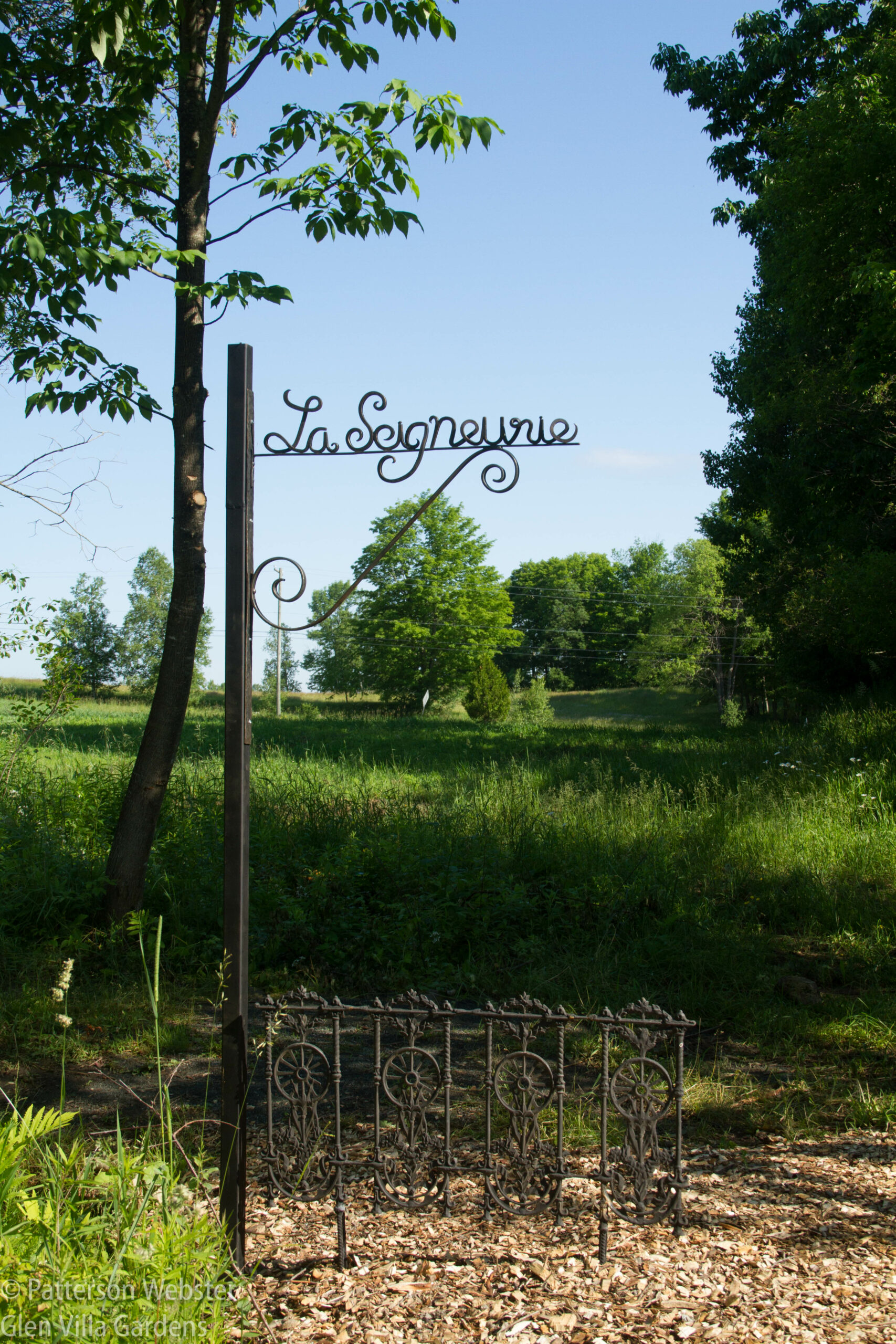 The old saying is a good one: if at first you don’t succeed, try, try again.

There’s a meme in the gardening world started by Bonney Lassie at call Tell the Truth Tuesday. Despite my fair share of failures, I’ve never joined in. But La Seigneurie, one of the newest parts of my Quebec garden, fits the meme all too well.

So even if it isn’t Tuesday, here’s the truth.

In early June this year, we seeded a farm field as part of Timelines, the 3 km trail I’ve developed that explores questions about memory, identity and our relationship to the land. We marked the entry to the field with a beautiful wrought iron sign made by local blacksmith Justine Southam, and beneath the sign we added two wrought iron gates whose style felt in keeping with the sign and the history behind it.  As I wrote earlier this summer, the seigneurial system was a key feature of 17th century Quebec under French rule. Long narrow fields ran down to the St. Lawrence River, giving habitants access for easy transportation. 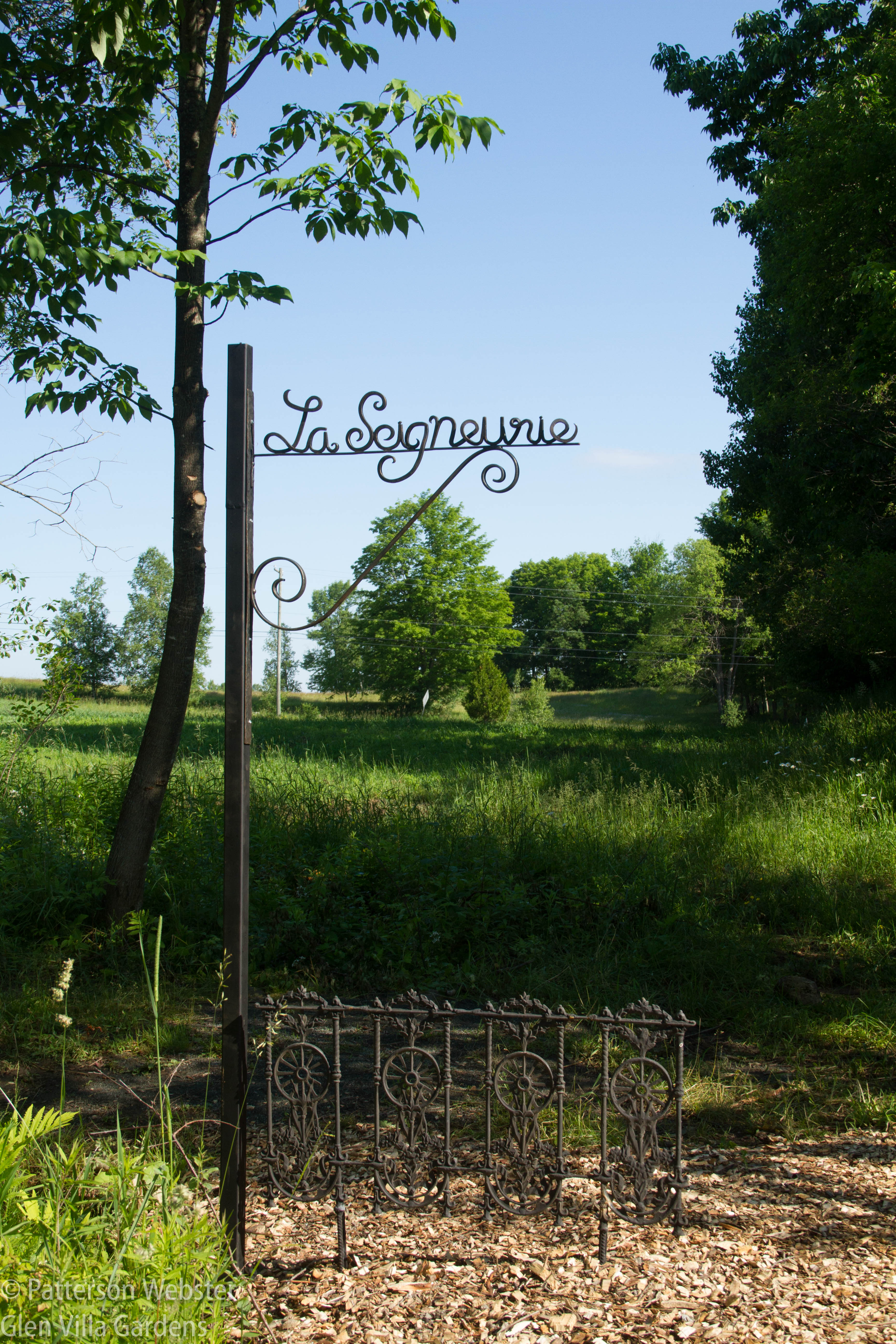 The wrought-iron will rust eventually but we can scrape and oil it when it does.

I had a clear picture in my mind of what I wanted to accomplish — narrow strips of land that stood out from each other because of the colour of the flowers and the different colours, heights and textures of the foliage. I chose three crops, canola, flax and barley, and we seeded them in strips of varying widths. 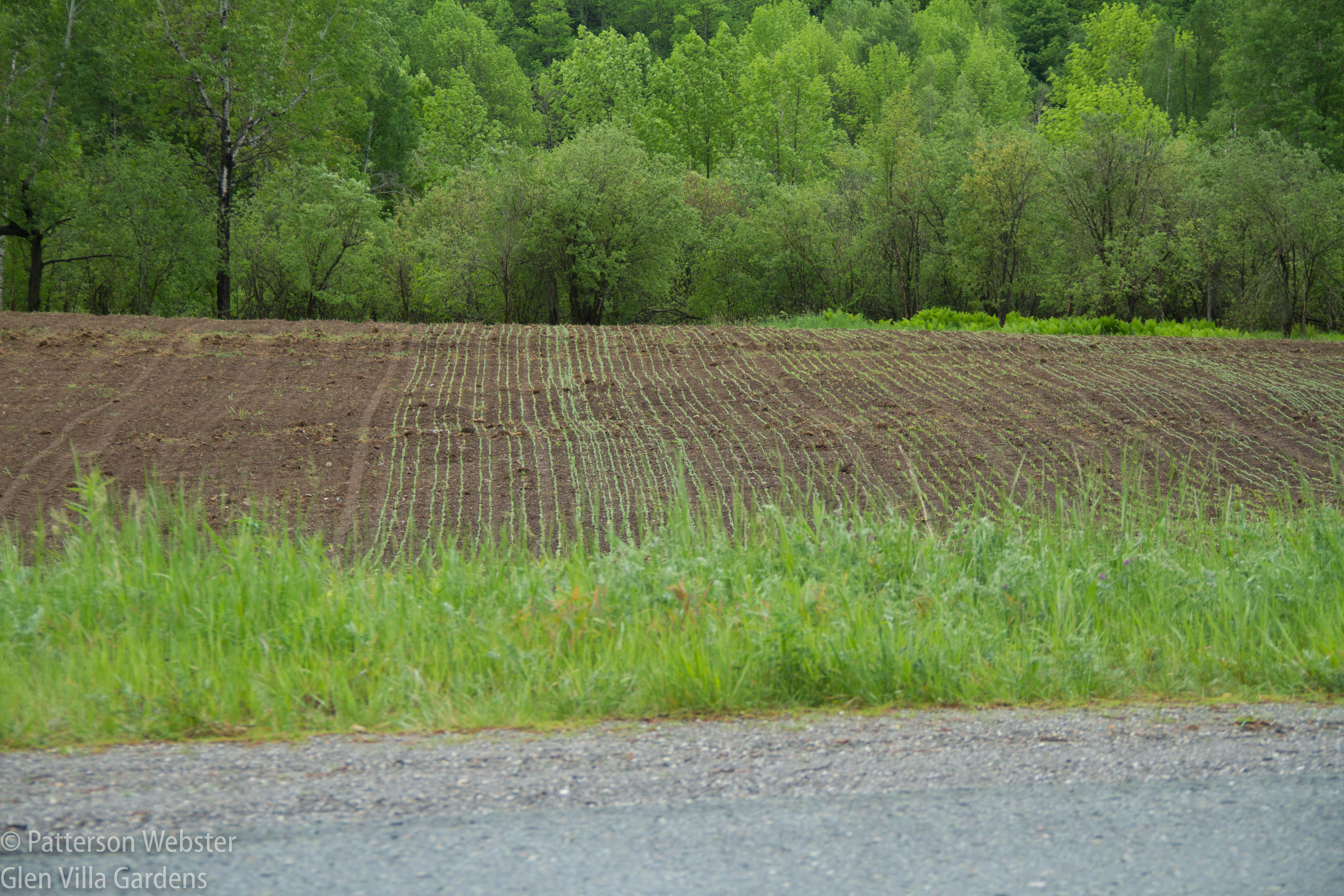 This photo was taken on June 11, only 6 days after the field was seeded.

Within a few weeks, the canola was beginning to grow, and the flax and barley were not far behind. 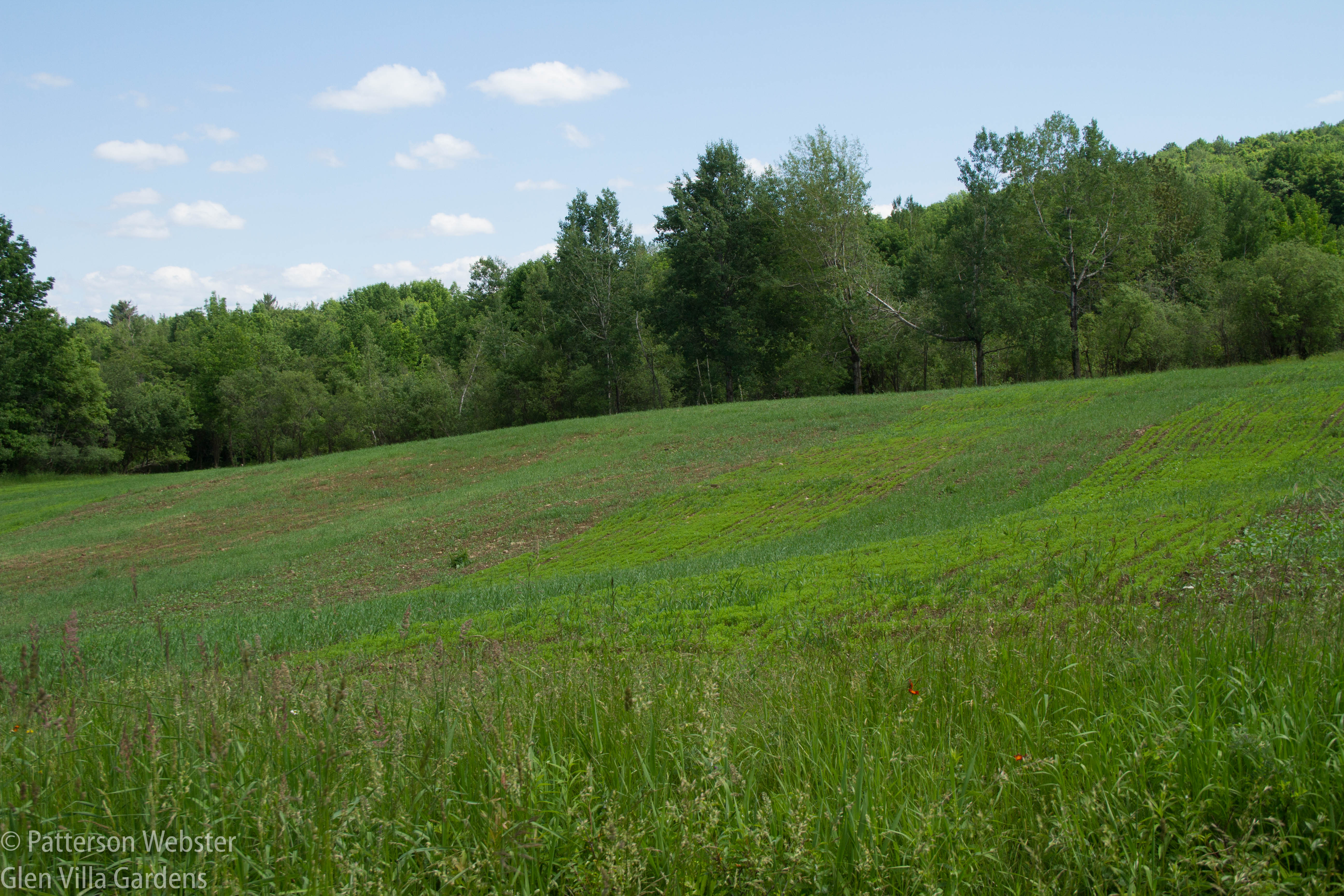 Two weeks later, the strips of canola, barley and flax were beginning to create the look I was hoping for.

But truth be told, the end result is not a success. Individually, flax flowers are quite lovely. 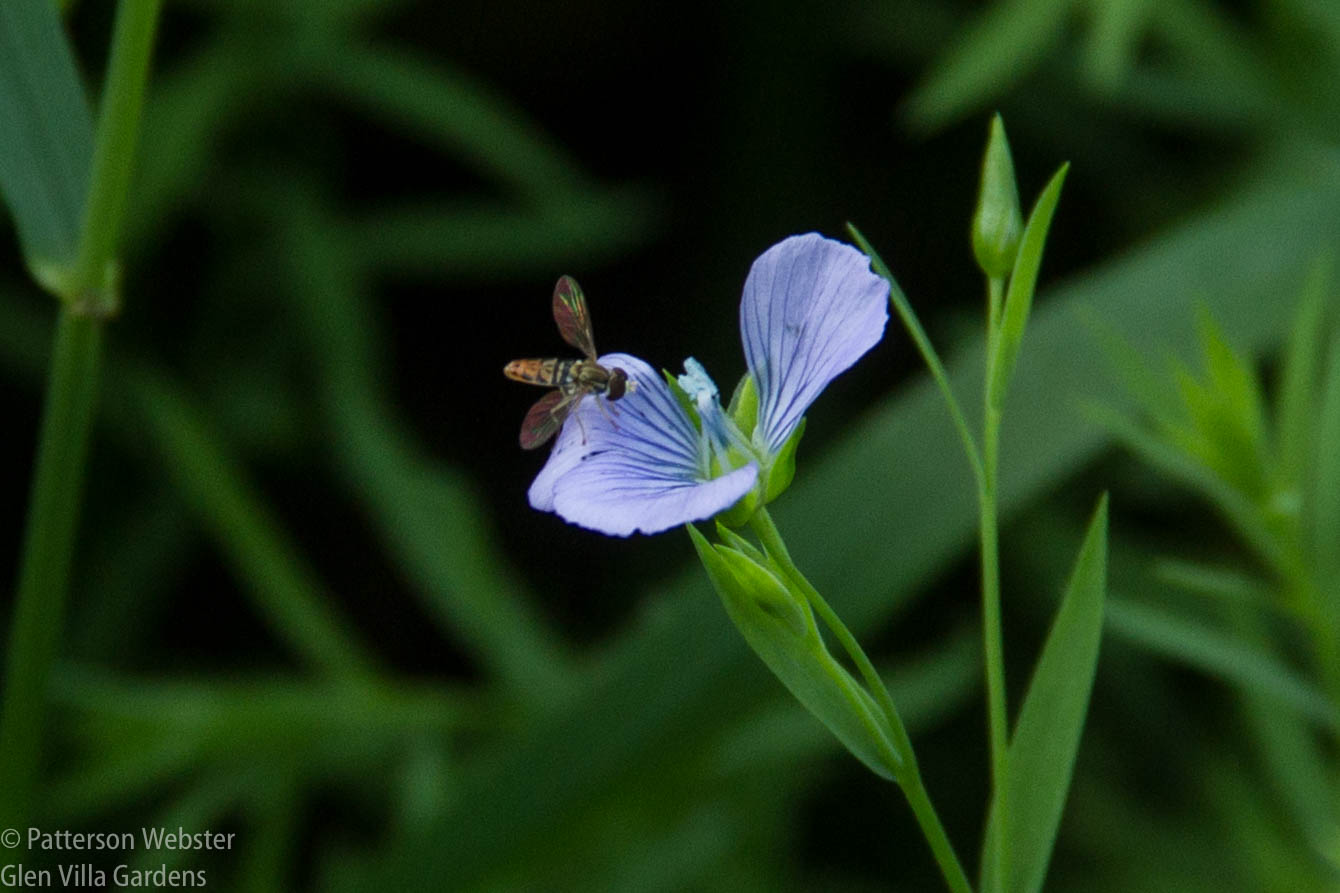 The flower is much more delicate than I’d expected. The bee seems to appreciate it.

The bright green foliage is interesting, too, with a fine texture in a bright citrusy green. 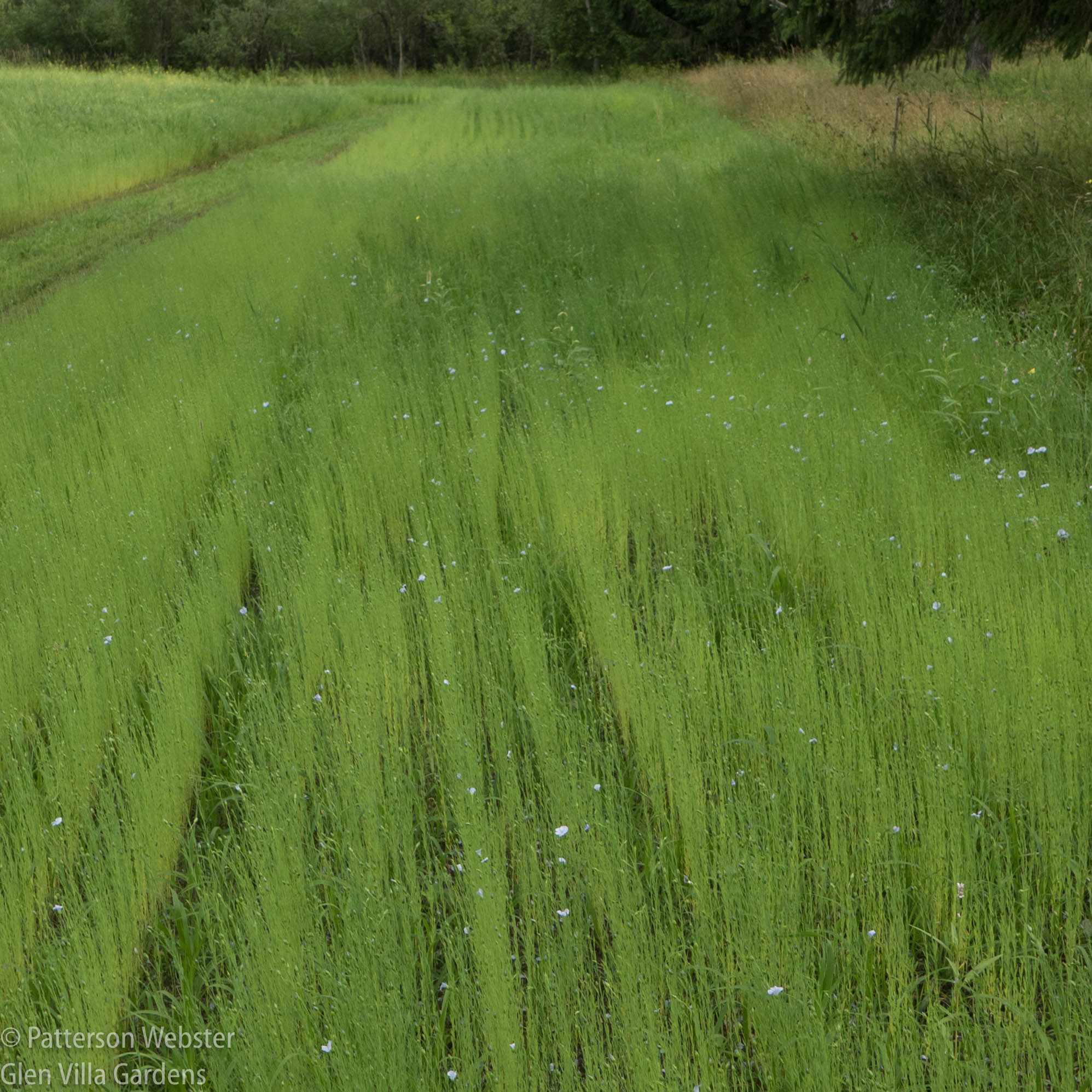 The rows are clearly visible here, but they disappear when seen from the side.

But flax has no impact en masse. 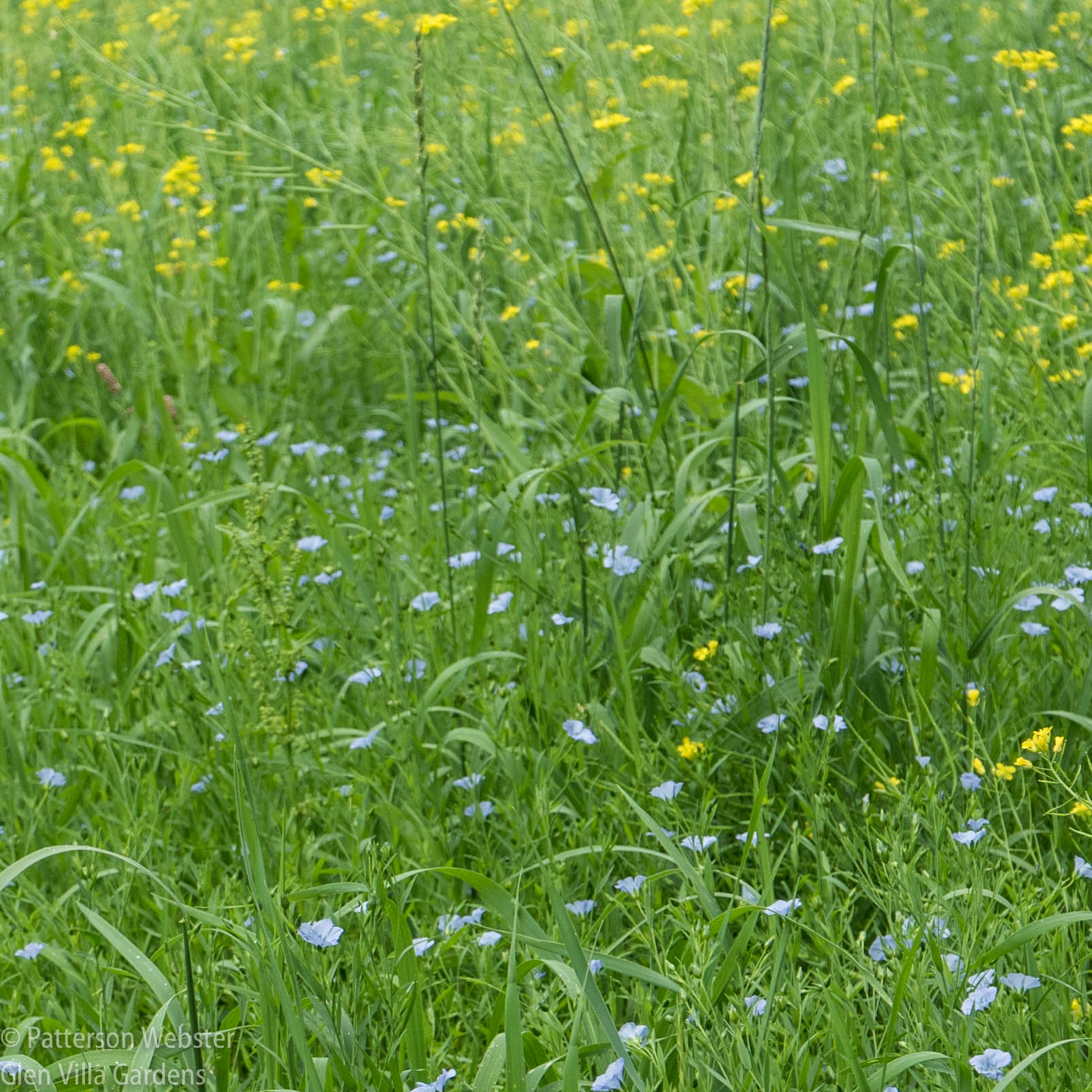 Talk about wimpy! And this photo makes it look better than it actually did. 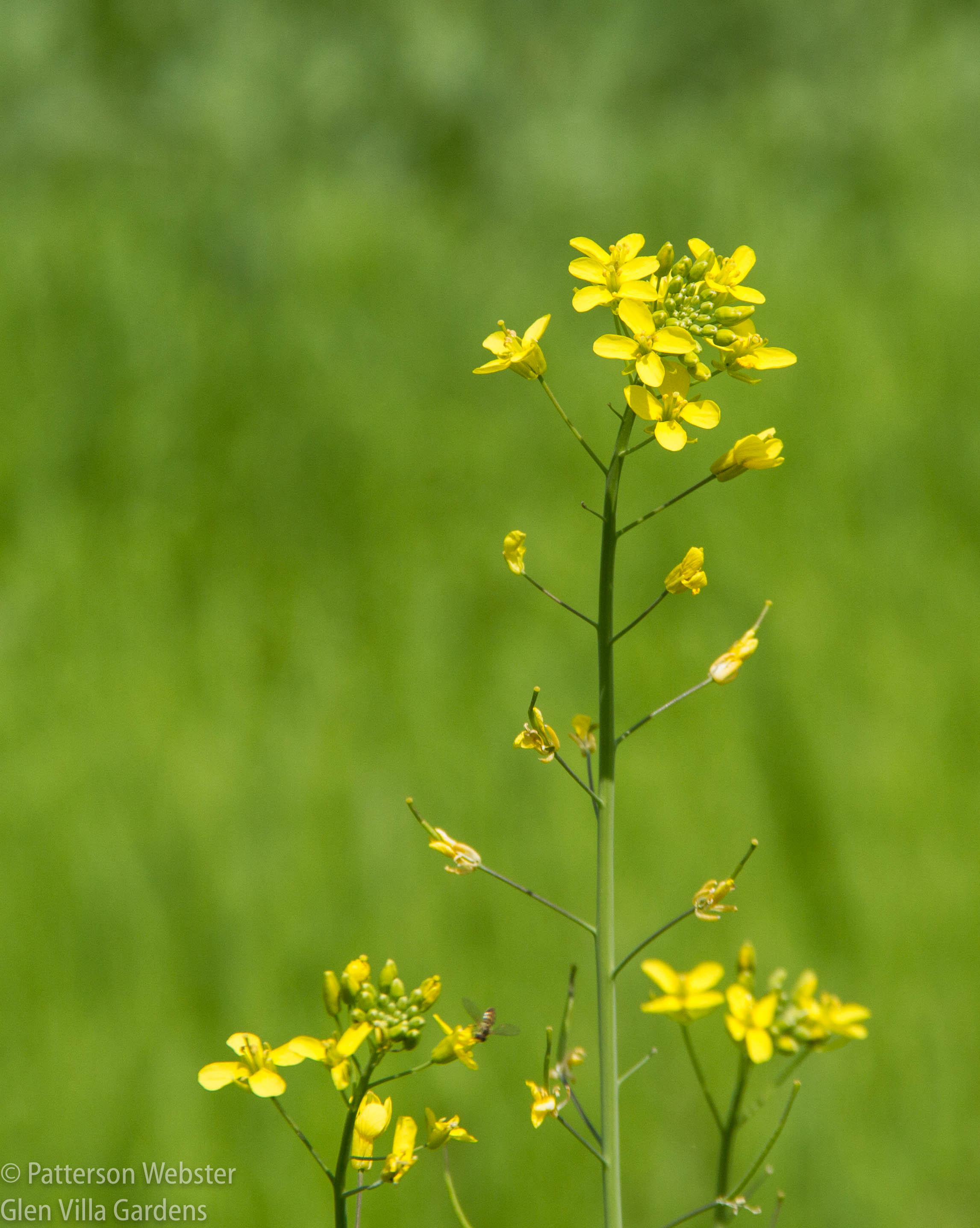 Canola is the name used now instead of the old one, rape seed, and it is clear from the blossom that it is a member of the mustard family.

They do have an impact en masse, and a powerful one, too. 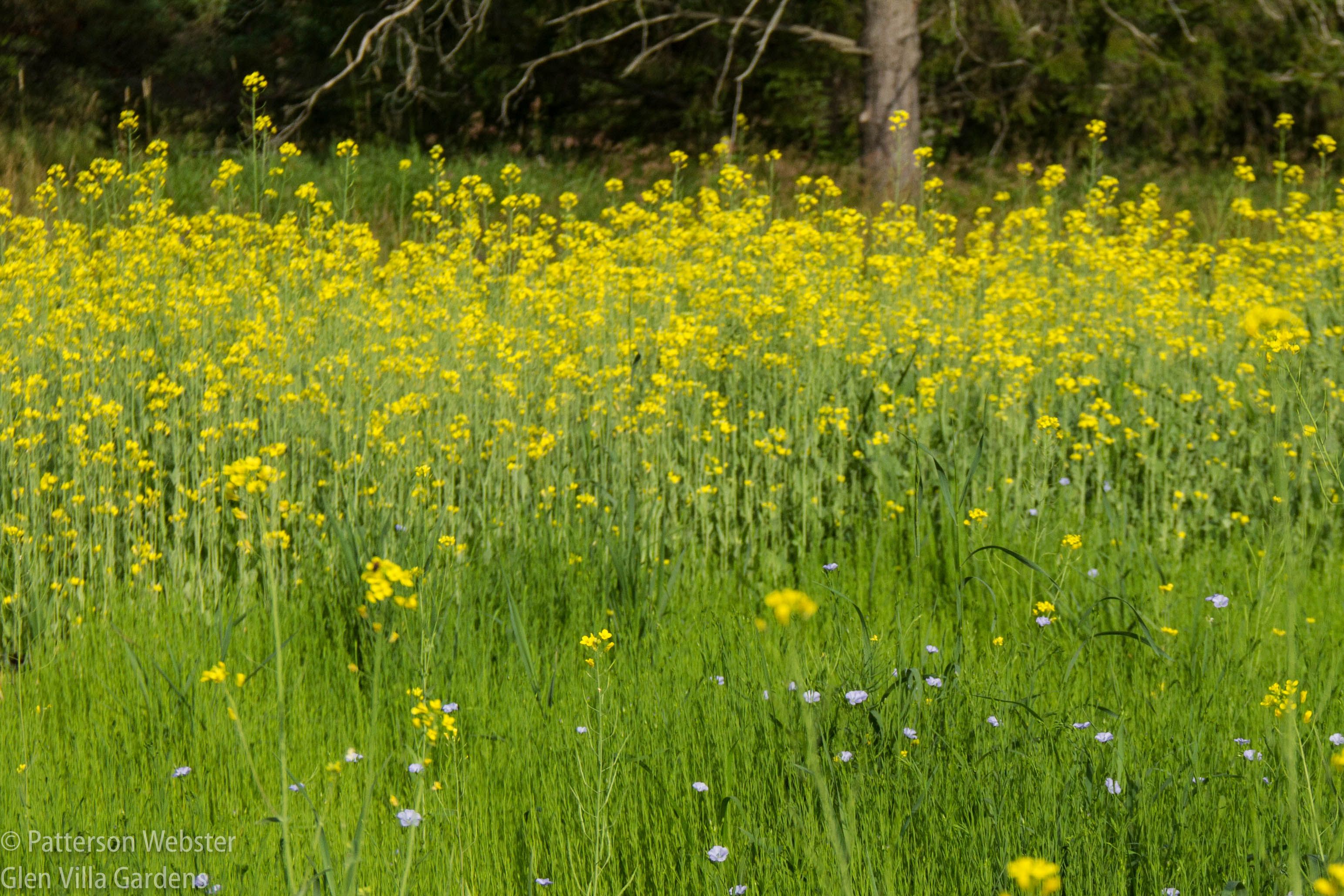 The canola was in full bloom on July 20, when we opened the garden as a fundraiser for the Massawippi Foundation.

People had warned me that the two crops wouldn’t bloom at the same time, and that the barley would only be in its early stages, so I wasn’t really expecting that the field would be solid strips of yellow, blue and tan. But I was expecting something more than what we got. 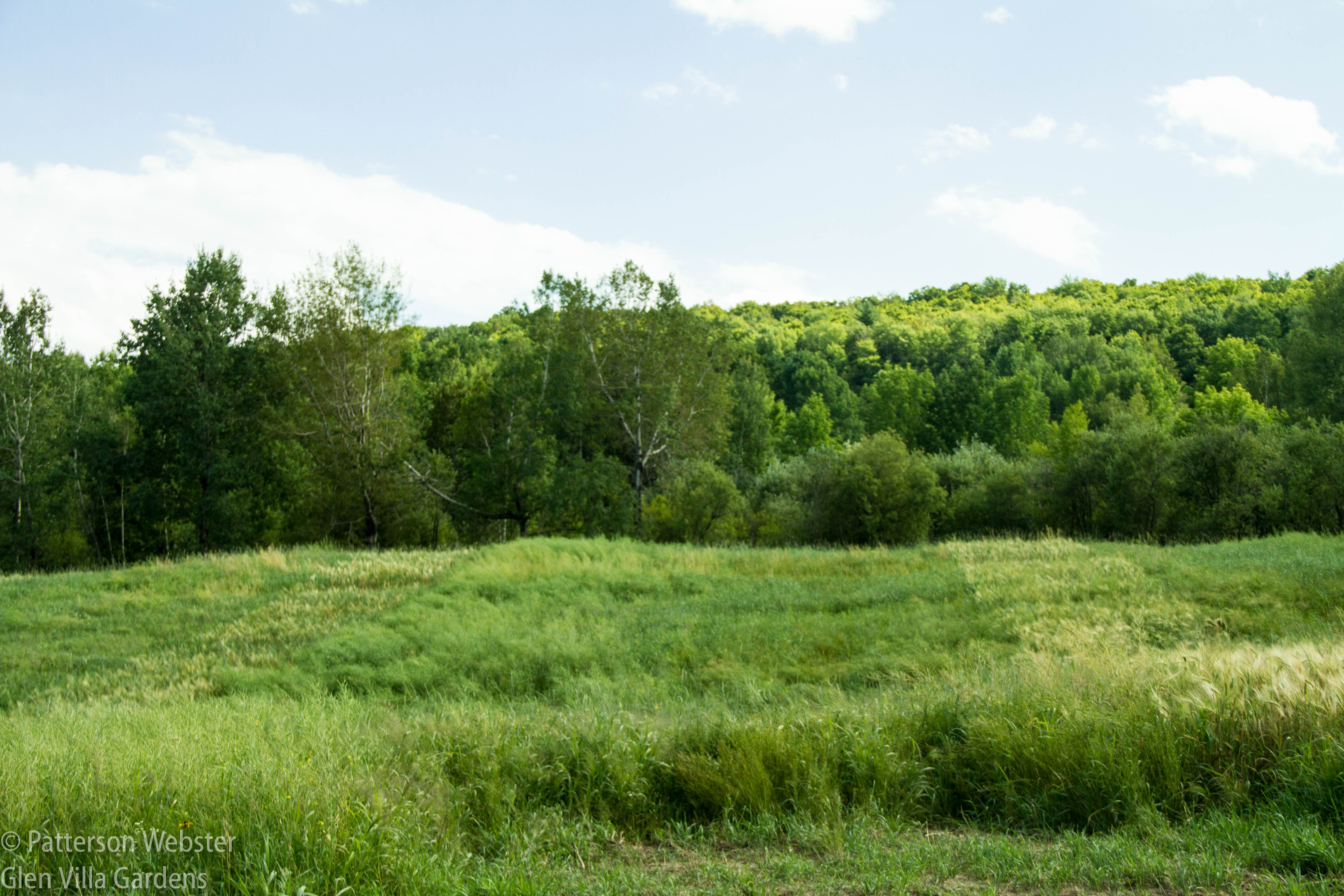 The different strips are visible but they aren’t nearly as striking as I had envisioned.

So it’s back to the drawing board in terms of what crops to plant. Over the winter I’ll be considering others — clover is high on my list right now. I’ll also consider whether to use only two kinds of plants instead of three, and whether to seed them in strips of equal width.

I’ll be a little sad if canola doesn’t make the cut because it plays a role in Canadian history.  Canola, aka rape seed, got its name from the Latin word ‘rapum’ which means turnip. In the 1970s Canadian scientists created a variant of rapeseed oil that contained less erucic acid, making it safer for consumption. The word canola is an acronym: Can(ada) o (oil) l (less) a (acid). Or less precisely, Canada oil (Can + ola).

With or without canola, I won’t abandon the concept of representing the seigneurial system. It’s an integral part of Quebec’s French heritage and reflecting that identity on the land is important to me and to the ideas behind Timelines. So in addition to researching possible crops, over the winter I’ll be reading Quebec history. Maybe some idea will surface, in fact or in folktale, that will tell me how to incorporate a stunning feature that so far has not received its full due. 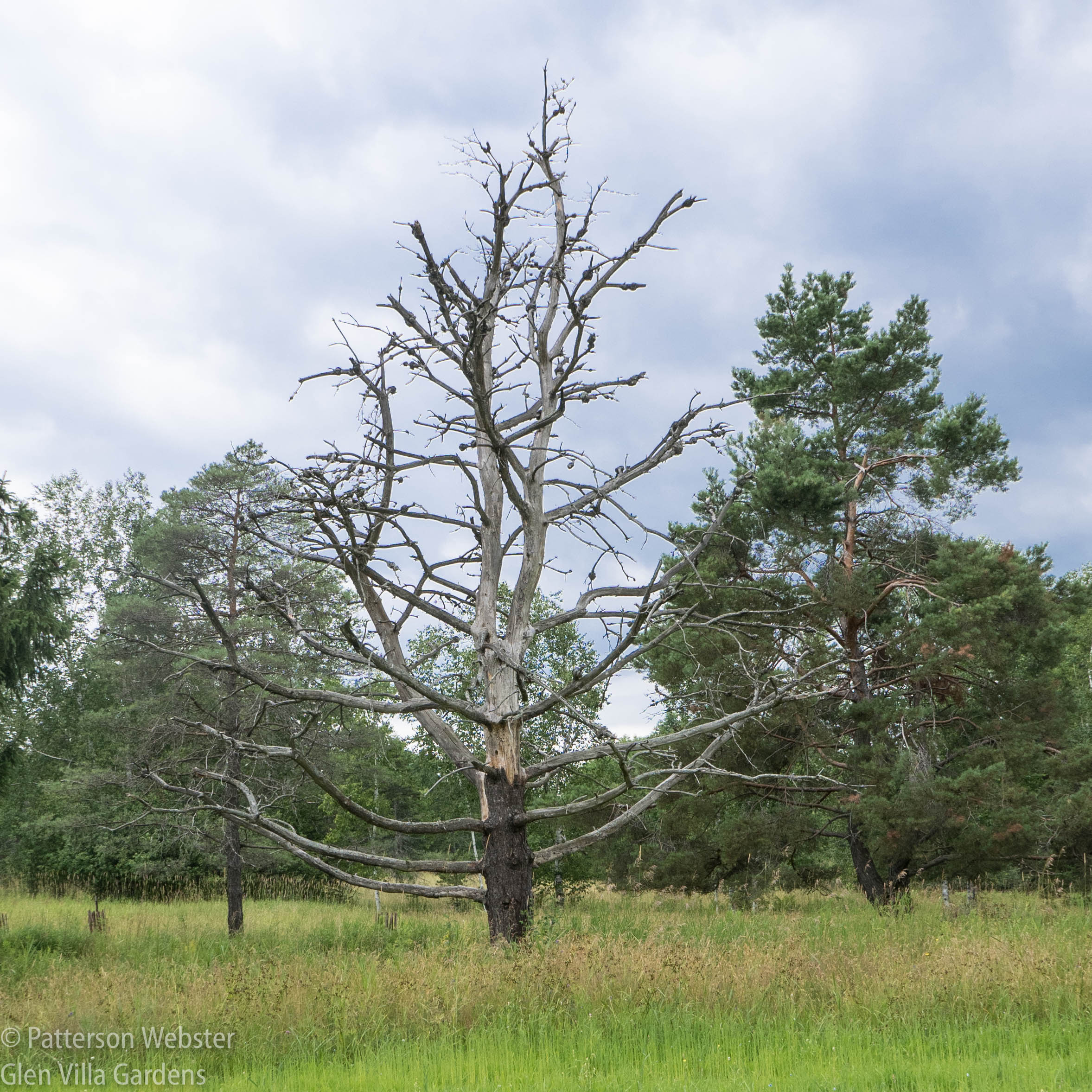 The mown path through the field leads straight to this witchy old dead tree, a natural sculptural form that I’d like to highlight.