Topiary for the Holidays 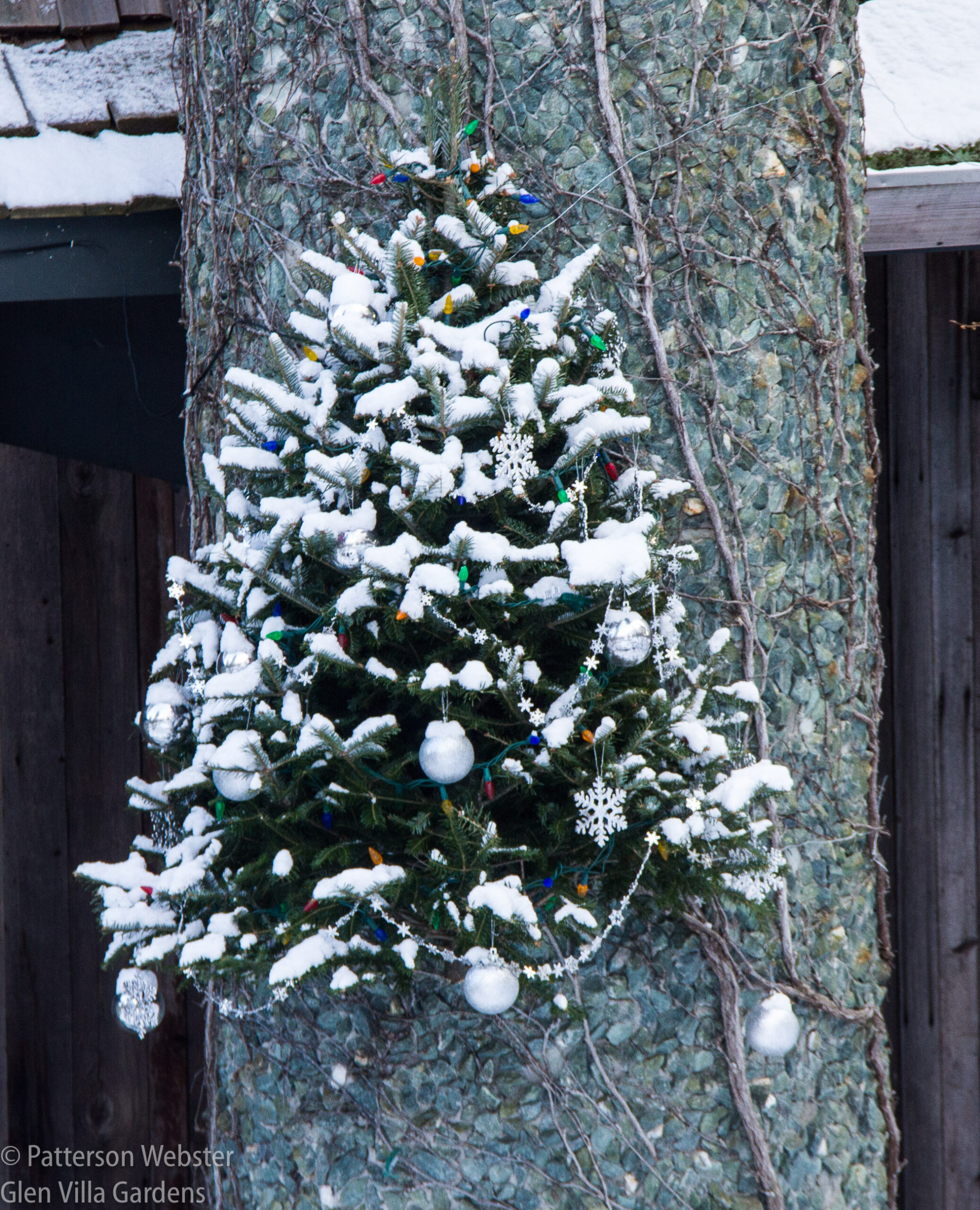 Do Christmas trees qualify as topiary?

We never think of them as such but they fit the definition — the Oxford dictionary calls topiary the “art or practice of clipping shrubs or trees into ornamental shapes.” And surely Christmas trees don’t grow naturally into the perfect cones commonly seen but have been pruned and clipped to shape them. 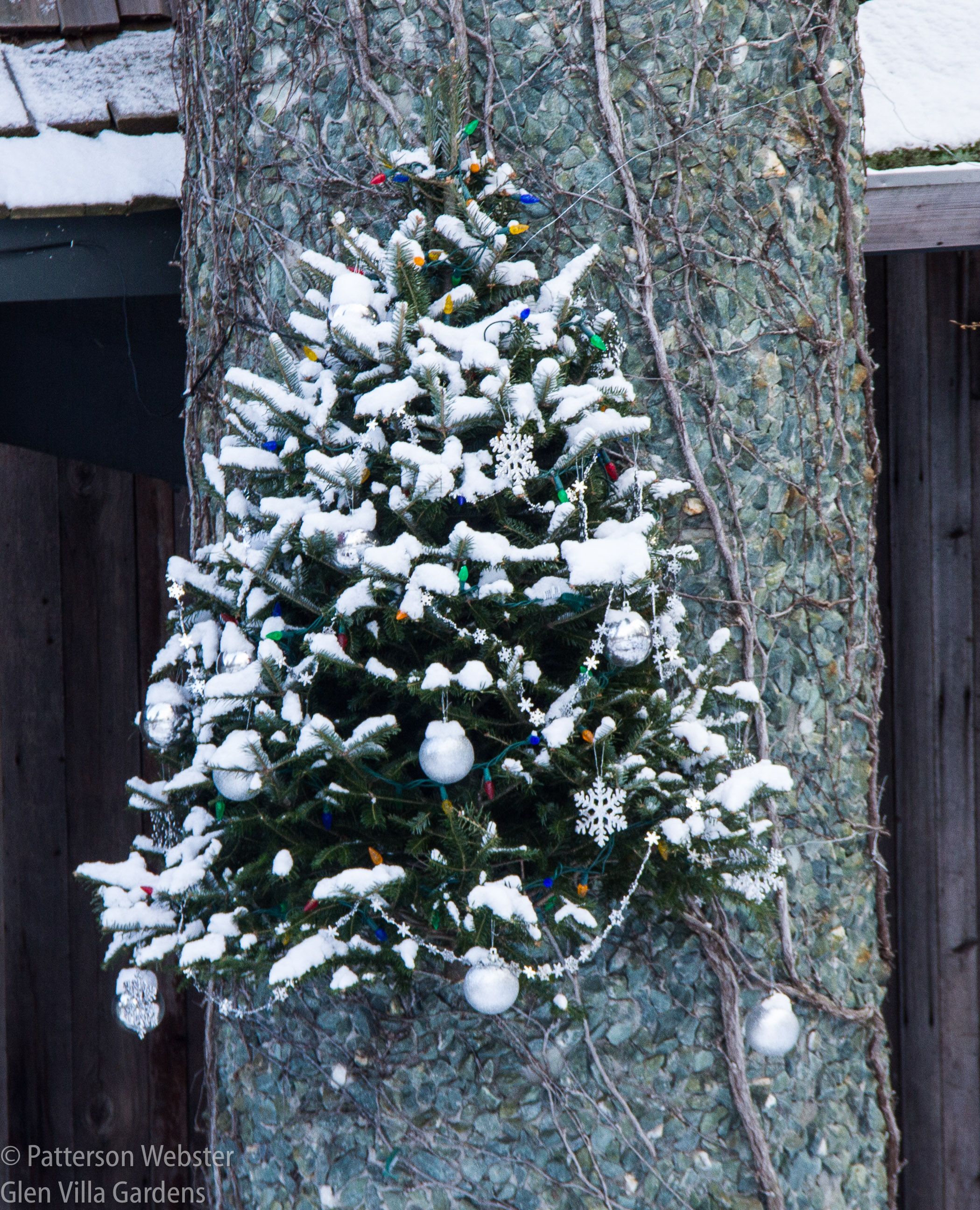 This cone-shaped spruce tree is attached to the chimney stack at Glen Villa. It hangs right outside our front door.

As a young gardener, I disliked topiary, thinking that it was a distortion of nature and consequently something that should be looked down upon, if not outlawed completely. But with time I’ve come to realize that all gardening distorts nature in one way or another, confining plants to borders and beds and combining them in ways never found in the wild.

I’ve also come to realize that topiary can be fun. Reviewing photos from my most recent trip to England, I offer these examples. At Rockcliffe, Emmas and Simon Keswick’s garden in the Cotswolds, the path up to a dovecote is lined with over-sized doves. 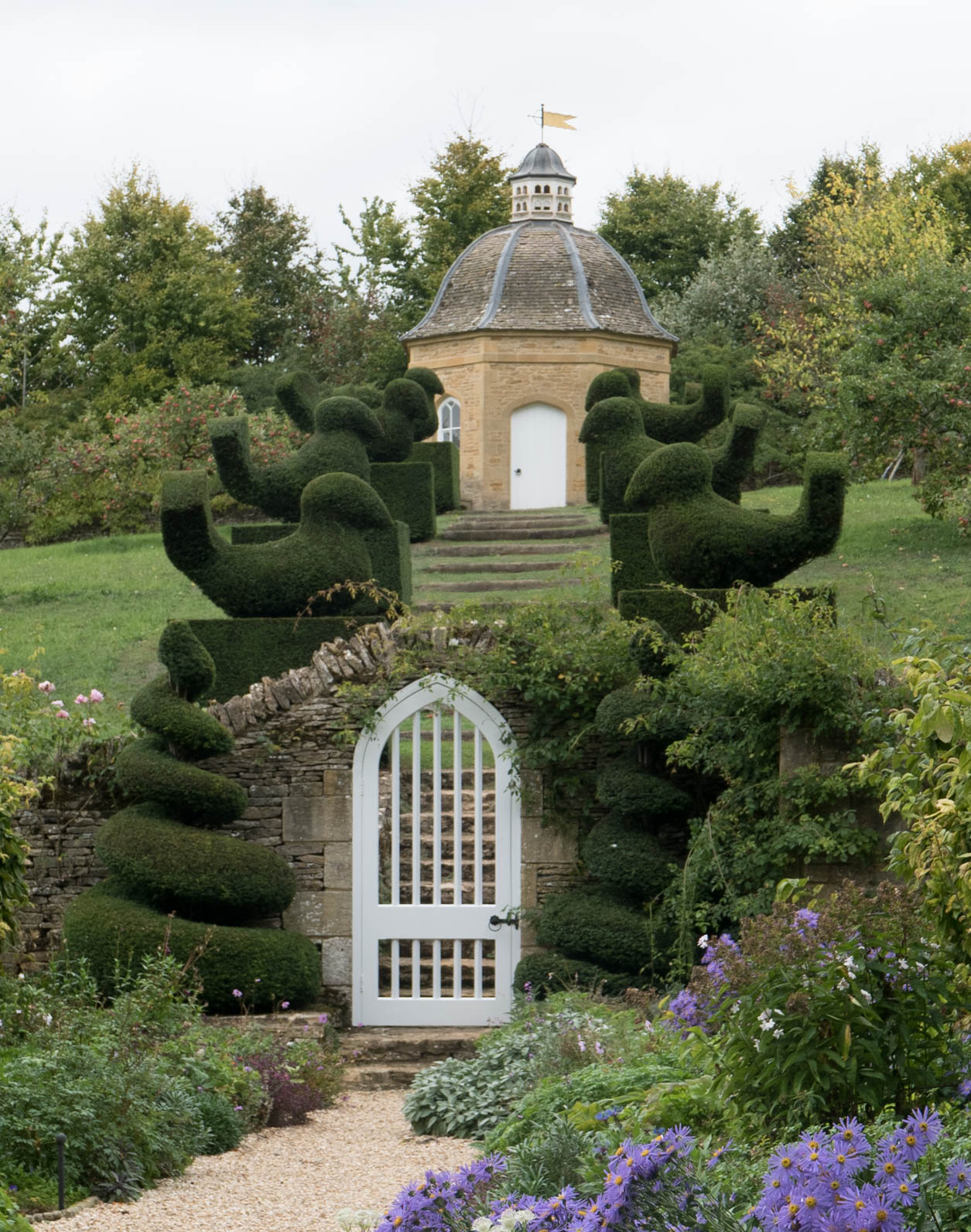 Each bird is slightly different, and each has its own personality. Note as well the corkscrew trees beside the gate.

At Haseley Court, a garden originally designed by Nancy Lancaster and now the home of Fiona and Desmond Heyward, a topiary chess board covers a flat piece of lawn. 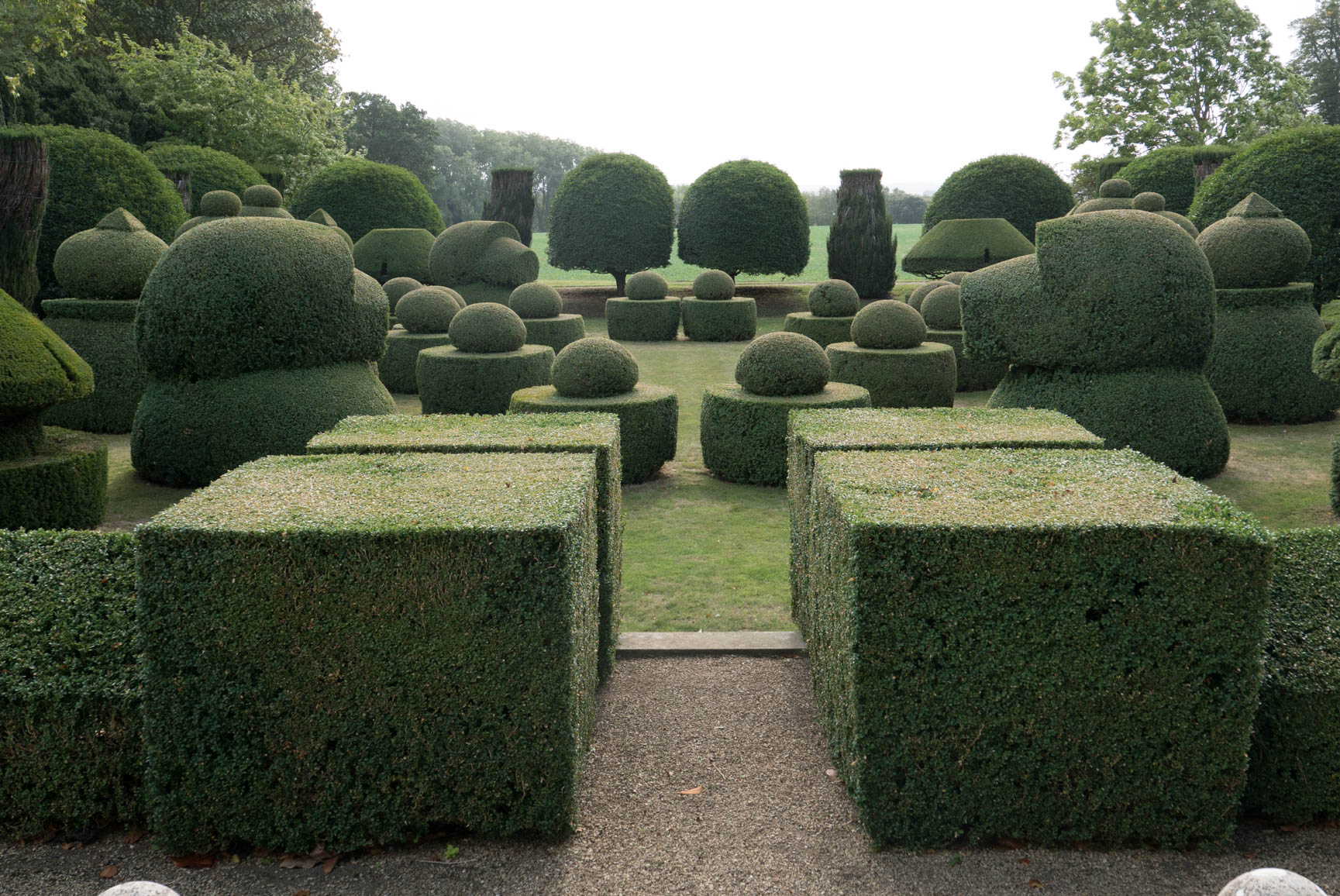 This topiary was maintained during World War II by a local gardener who cycled over from the nearby village to prune his ‘kings and queens,’ as he called them.

At The Old Rectory at Castle Rising, a topiary couch offers a place to sit and watch a tennis game. 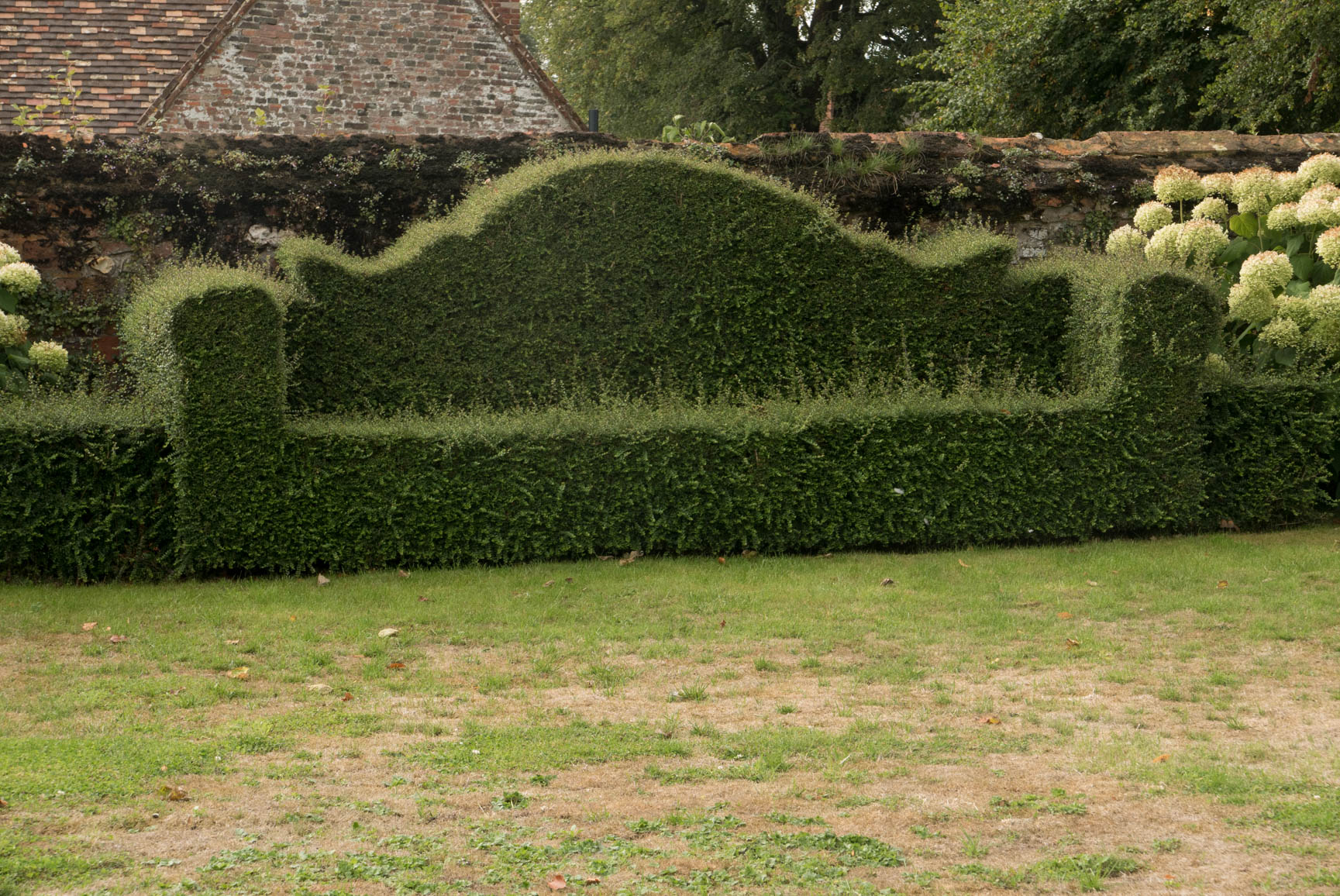 The sofa is not necessarily comfortable but it does invite you sit down.

England isn’t the only place where topiary can be found. In Railton, a small town in Tasmania, topiary features in many gardens. 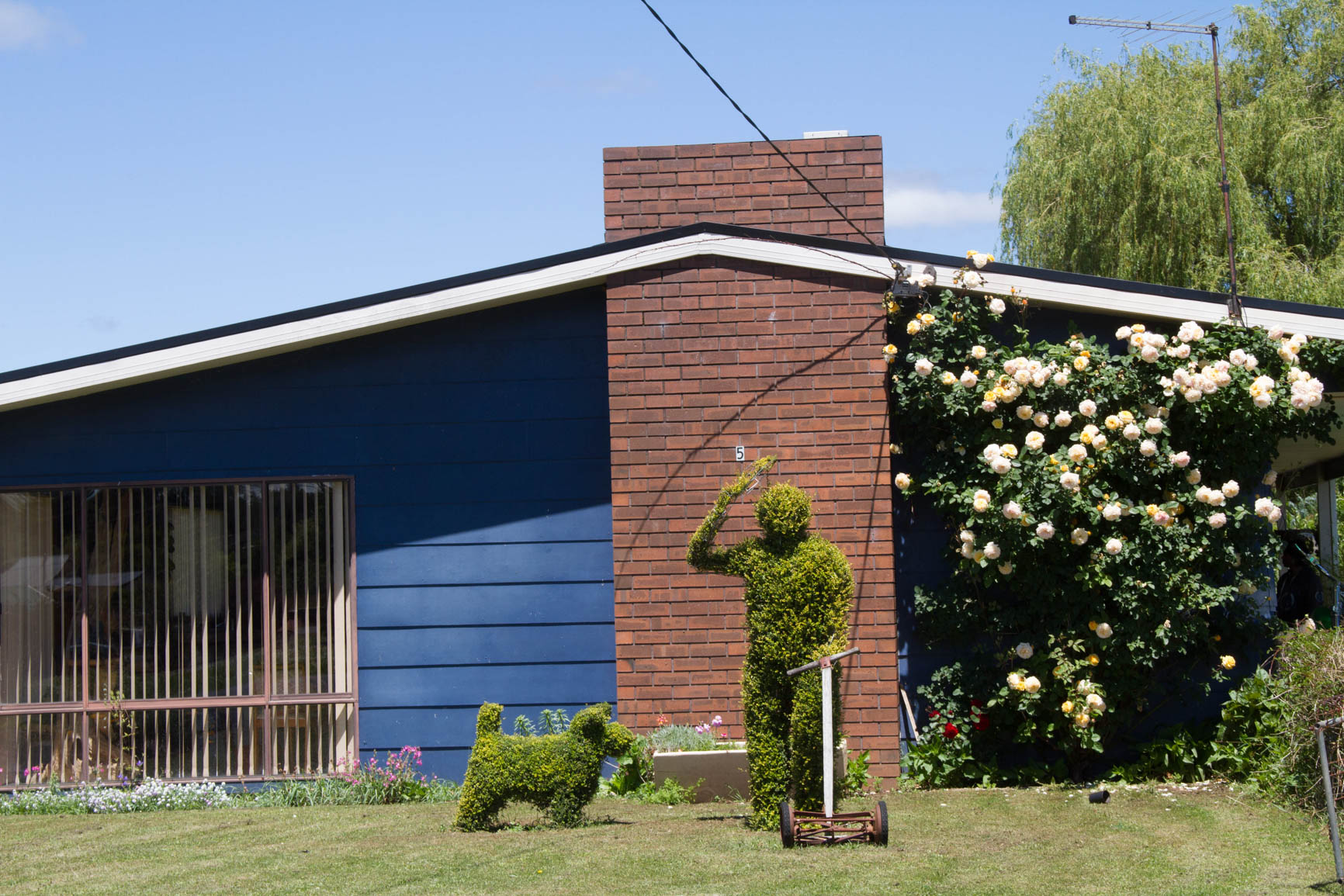 Talk about green men! Is this guy about to throw something for the dog to catch or is he waving to passers-by?

Not surprisingly, a train is featured along Railton’s main street. 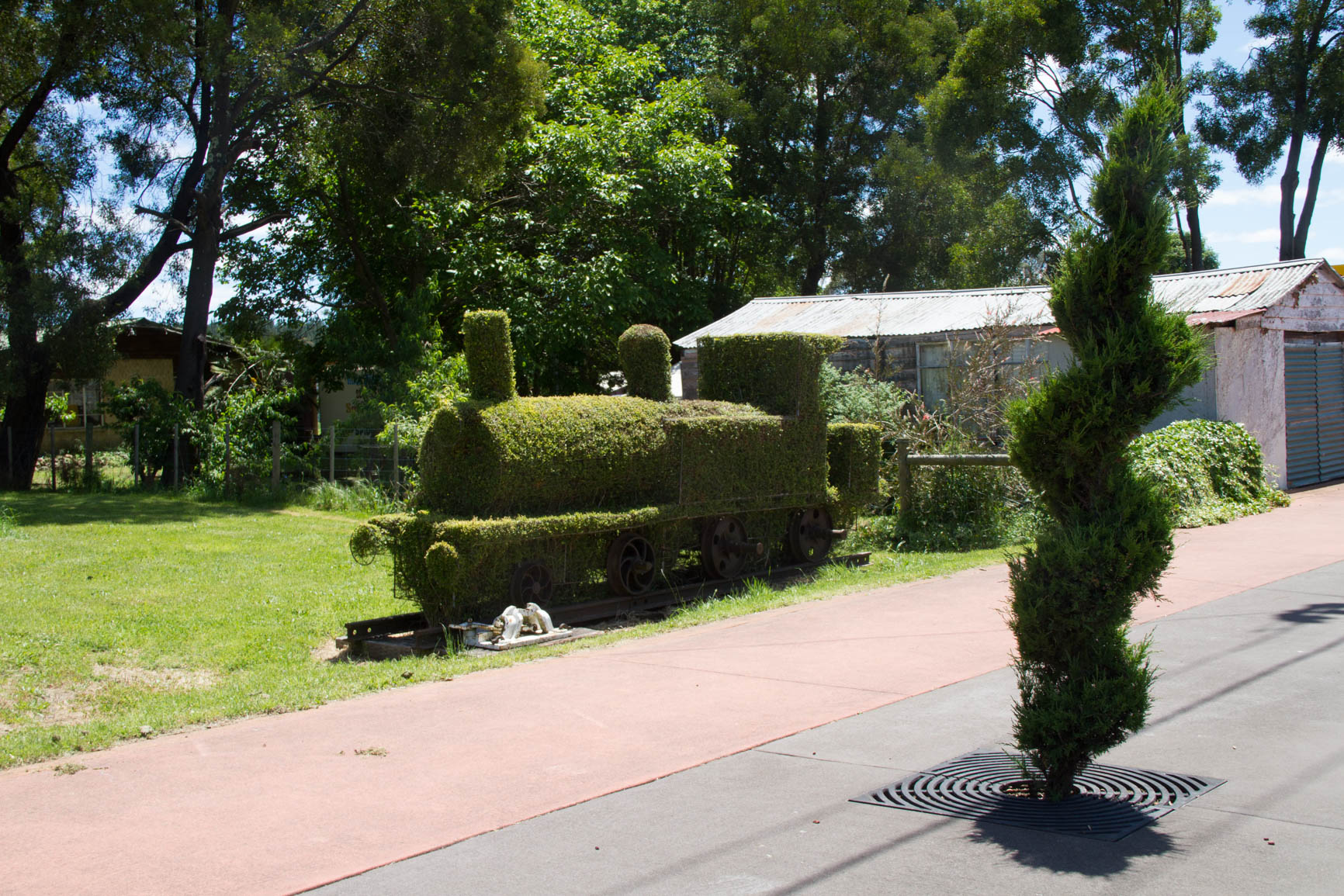 The wiggly tree rising up from the tree grate is topiary of another kind.

And since this is Australia, there is a kangaroo. 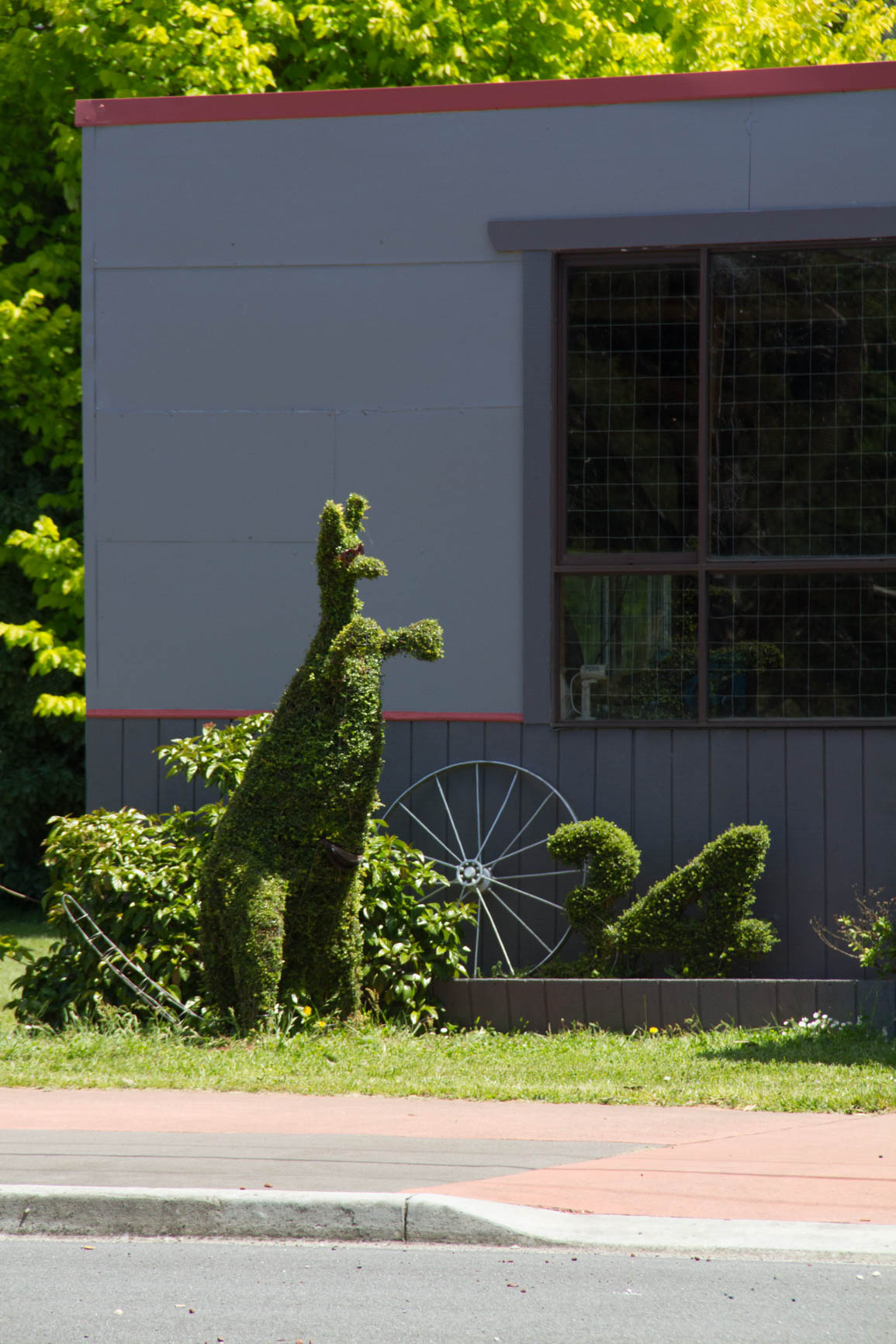 An odd looking beast but clearly meant to be a kangaroo. The pouch may not be visible but the sunglasses are.

Animals often feature in topiary. The American garden which is tops for topiary is the Ladew Topiary Garden in Monkton, Maryland, where 100 topiary creations decorate the garden’s 22 acres. 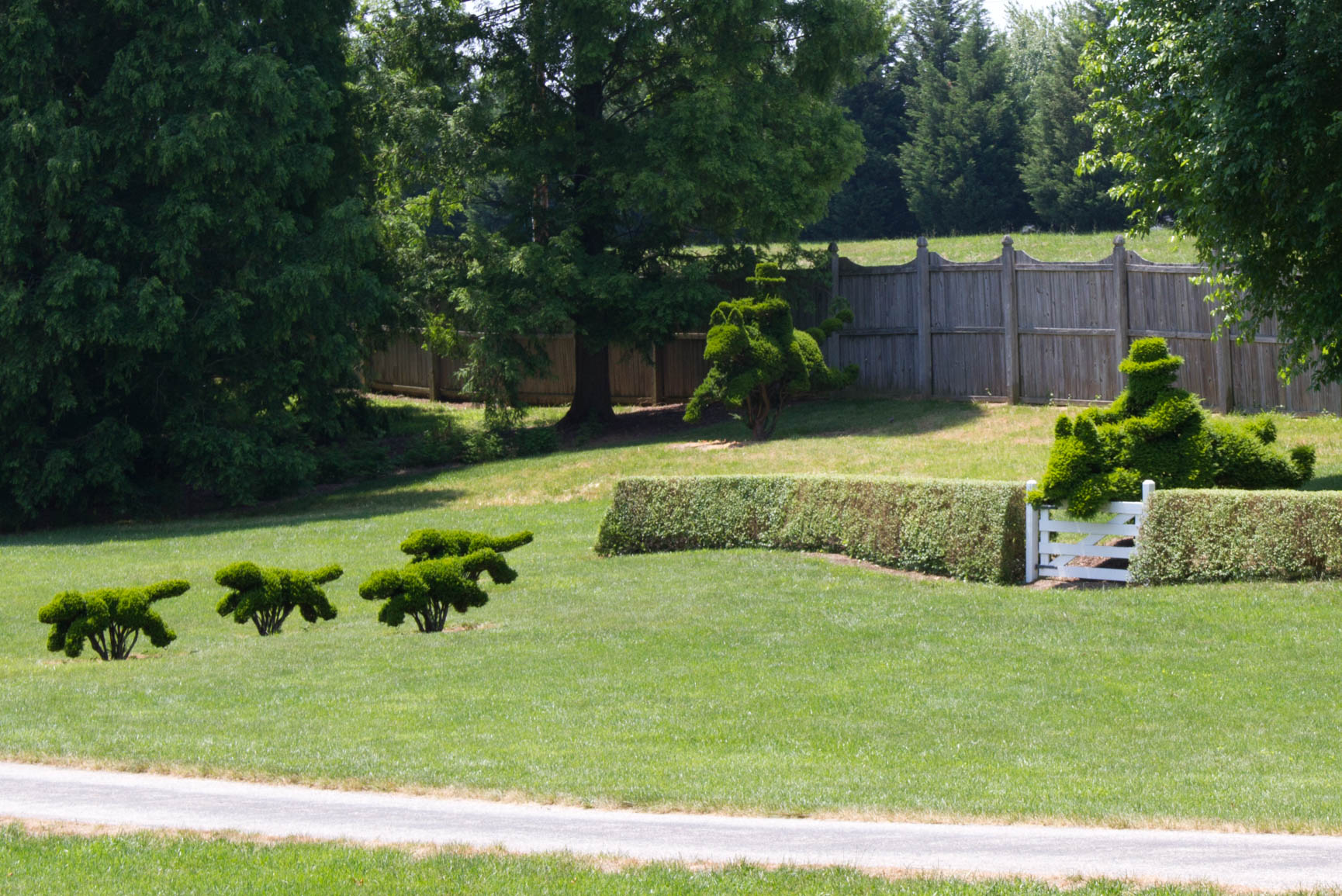 Harvey Ladew, the man who created Ladew’s topiaries, was an anglophile who rode to hounds. When he saw a topiary of hounds chasing a fox atop an English hedge, he decided to go one better, adding two riders and their horses. The fox, not shown here, was looking a bit tired when I saw him a few years ago.

Also at Ladew is an enormous swan, swimming happily along the top of a wavy hedge. 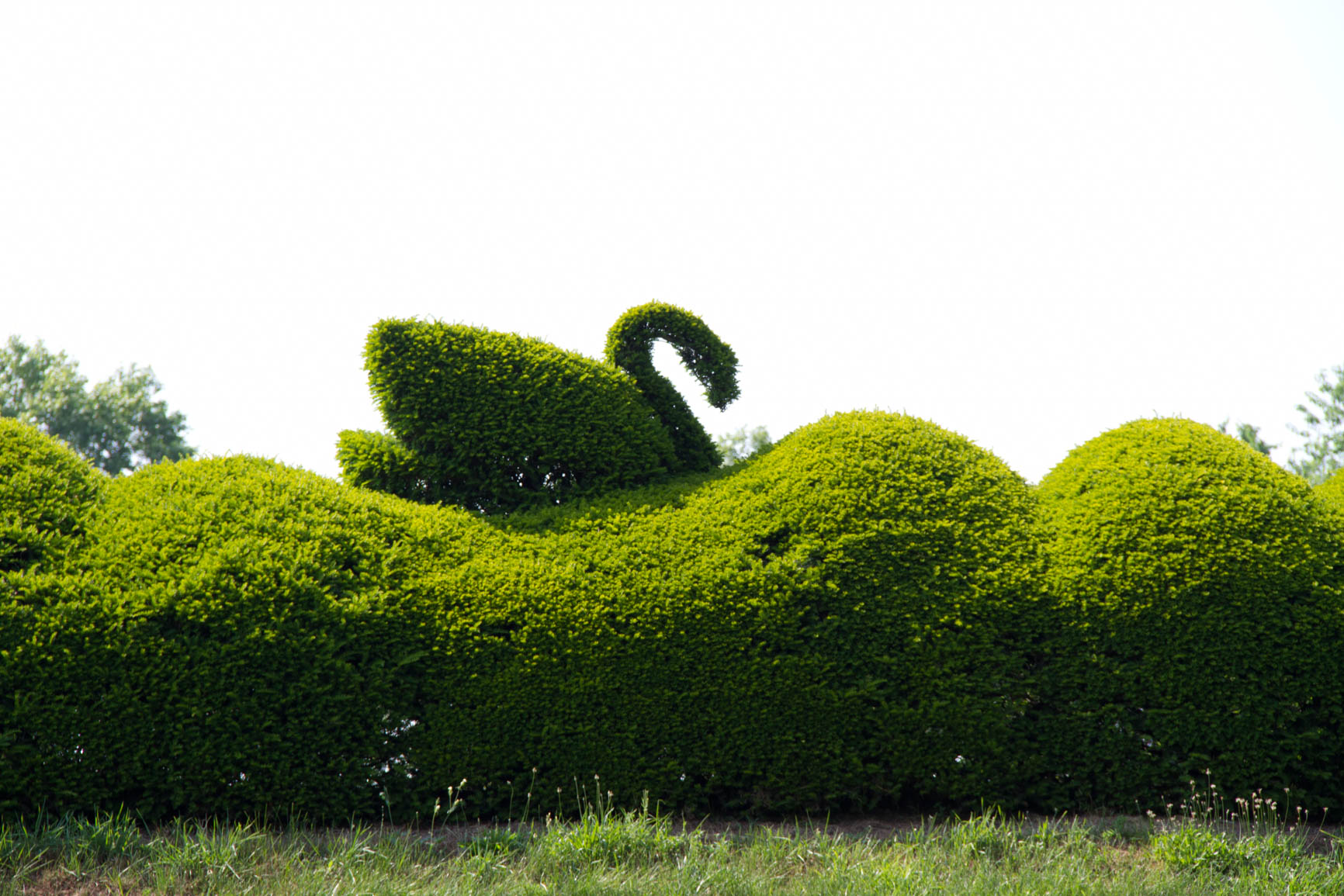 Consider the time that went into shaping this fine piece of topiary, and the skill that was needed to do it. Impressive!

And at Iford Manor, near Bath, hens and chicks parade across a lawn along with squirrels and other animals I don’t remember. 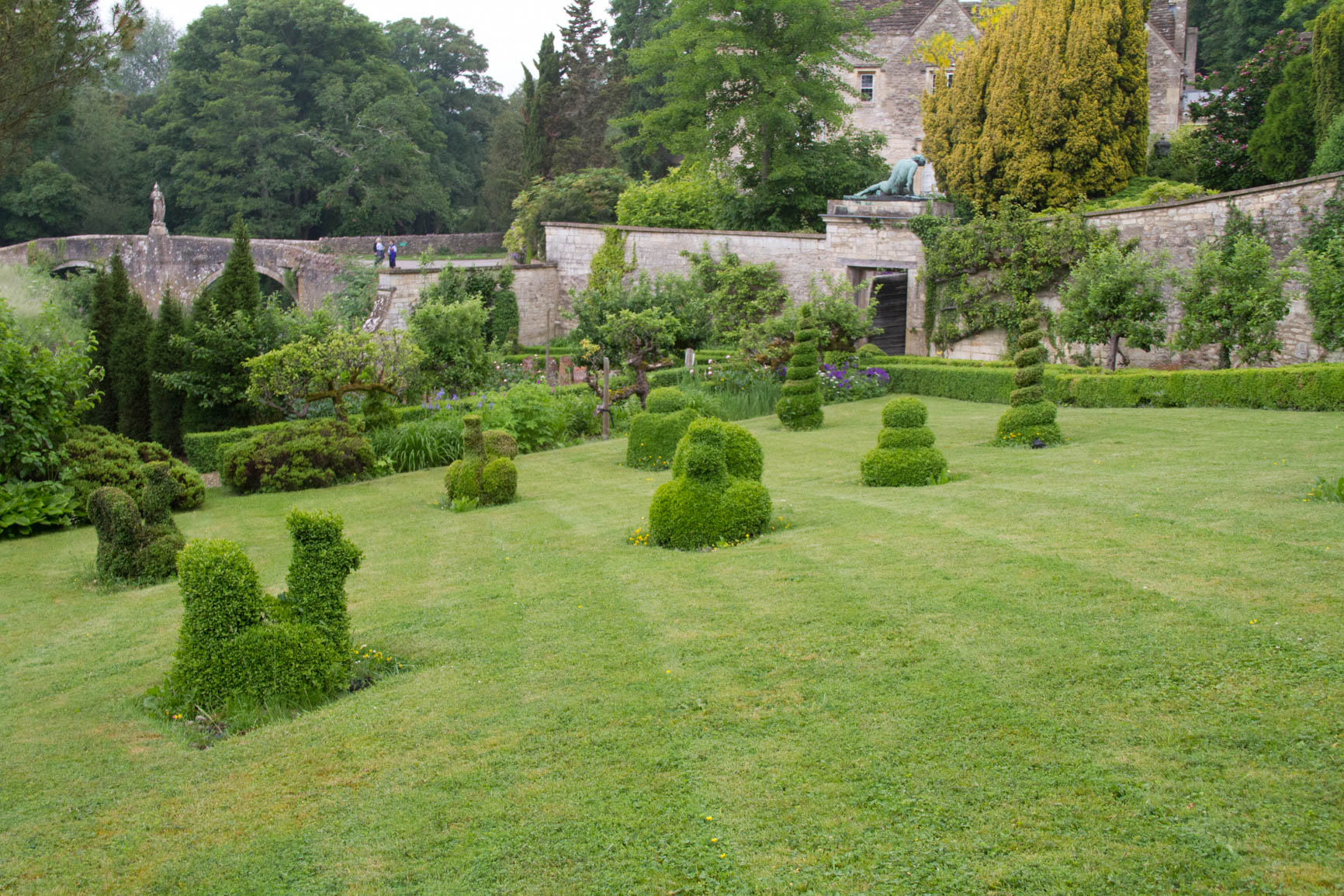 This area includes a sofa and table with tea pot. Very English and unaccountably amusing.

Topiary dates back to the first century or even earlier and became very fashionable in England in the late 17th century. Sir Francis Bacon, one of the influential writers and critics of the period, didn’t like it much.

“As for the making of knots or figures with divers coloured earths, they be but toys; you may see as good sights many times in tarts…I for my part do not like images cut in juniper or other garden stuff; they be for children.”

A few year later, Alexander Pope went further, ridiculing the figures that might be available at the local garden centres of the day:

“Adam and Eve in yew, Adam a little shattered by the fall of the tree of knowledge in the great storm; Eve and the serpent very flourishing.” 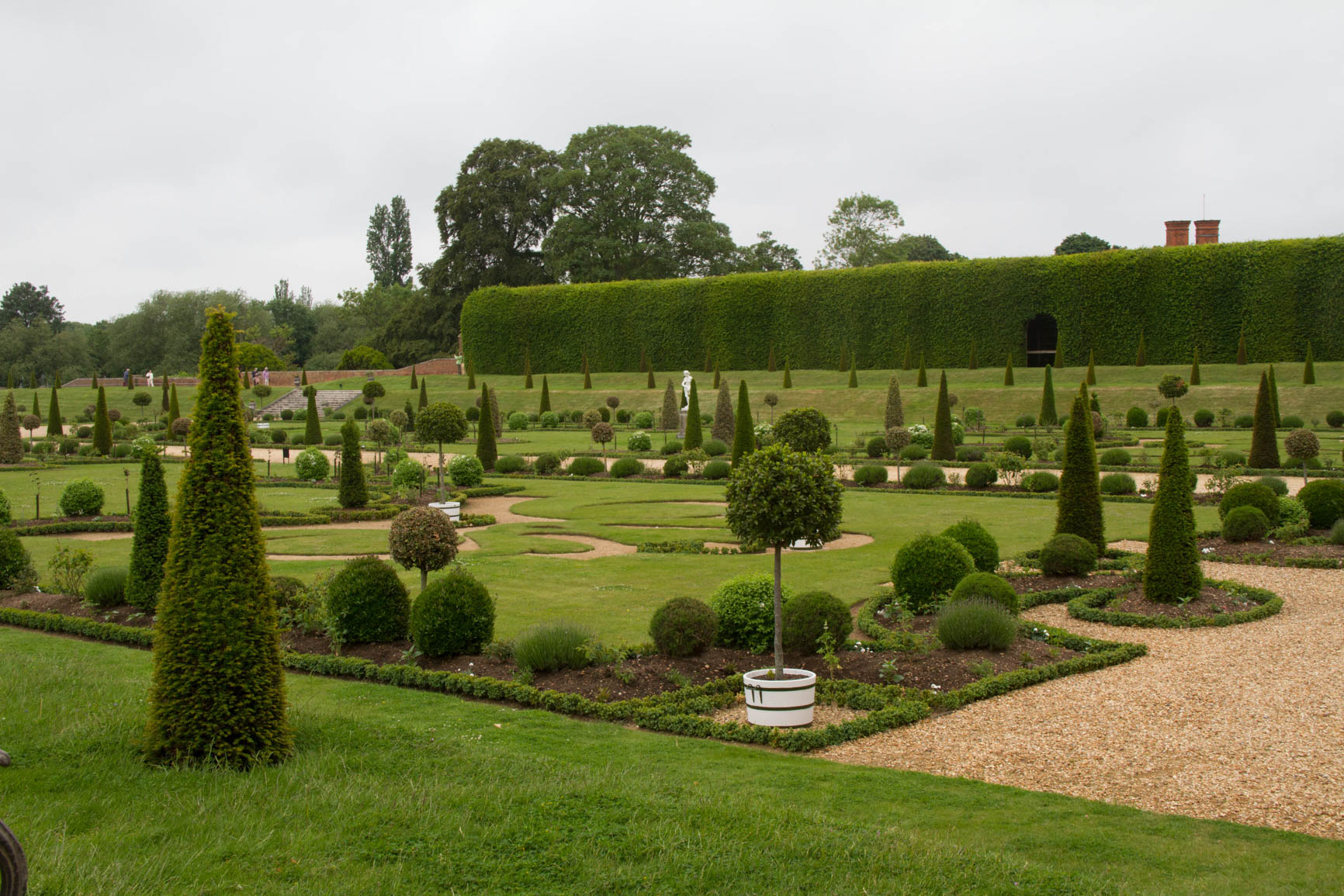 As gardens became more ‘natural’ and less formal, topiary went out of fashion. But the Arts and Crafts gardens of the early 20th century brought it back into style. 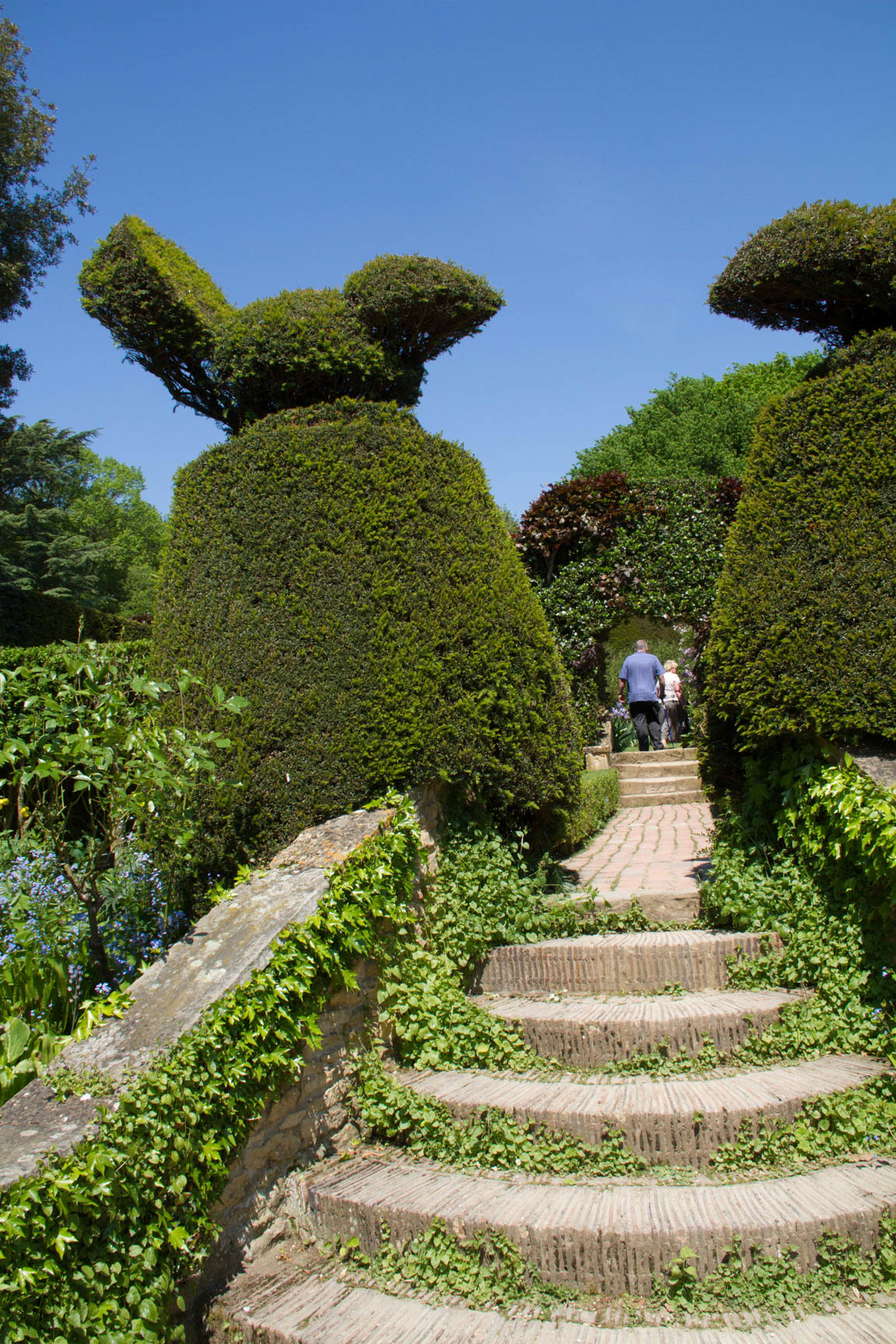 Lawrence Johnston used topiary to great effect in his garden, Hidcote, the first garden in England to be taken over by the National Trust.

Contemporary topiary takes many forms. It is used extensively in American and European gardens to provide structure and a sense of formality. 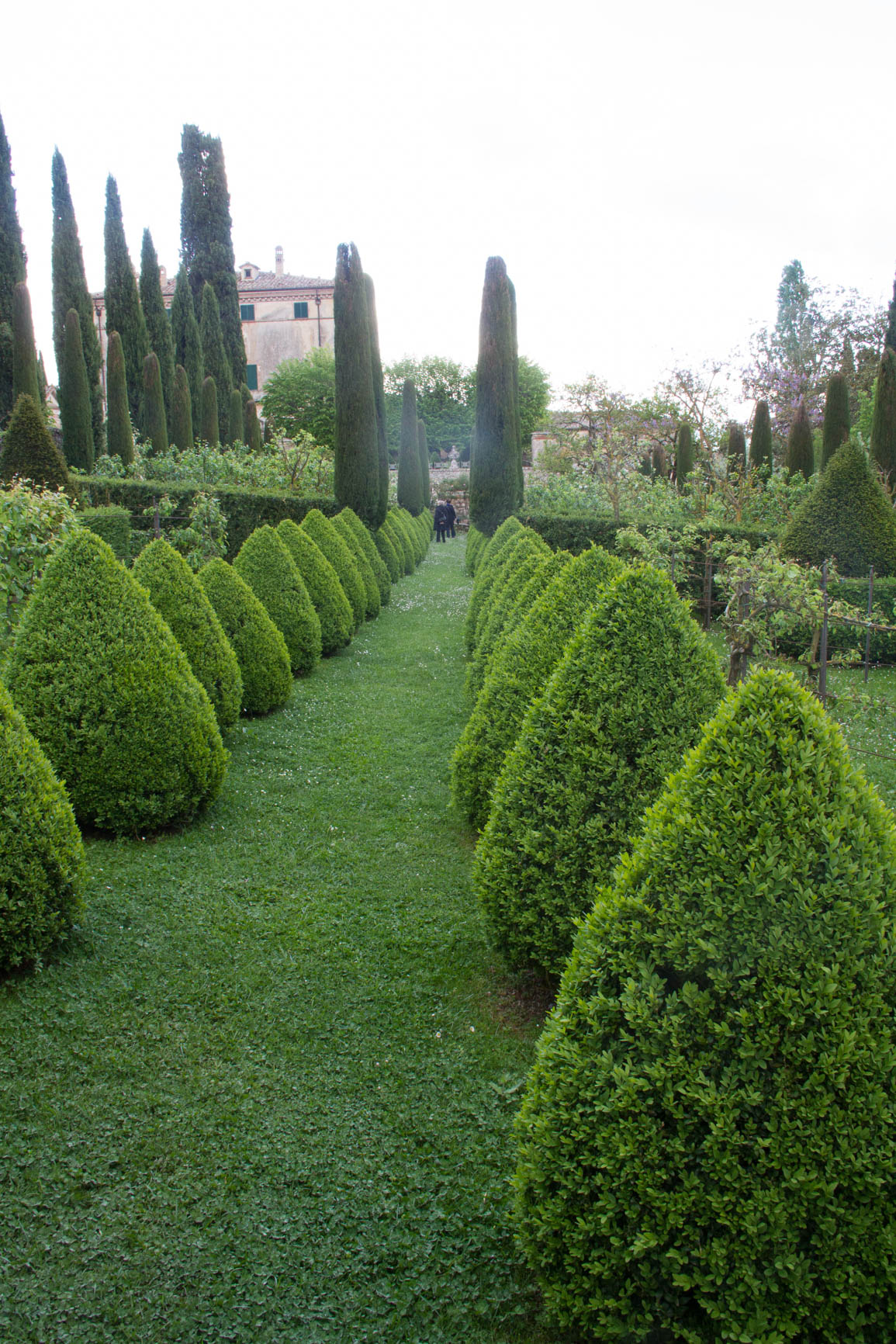 But it is used more imaginatively as well. The American gardener Pearl Fryer has created elaborate shapes in his South Carolina garden. 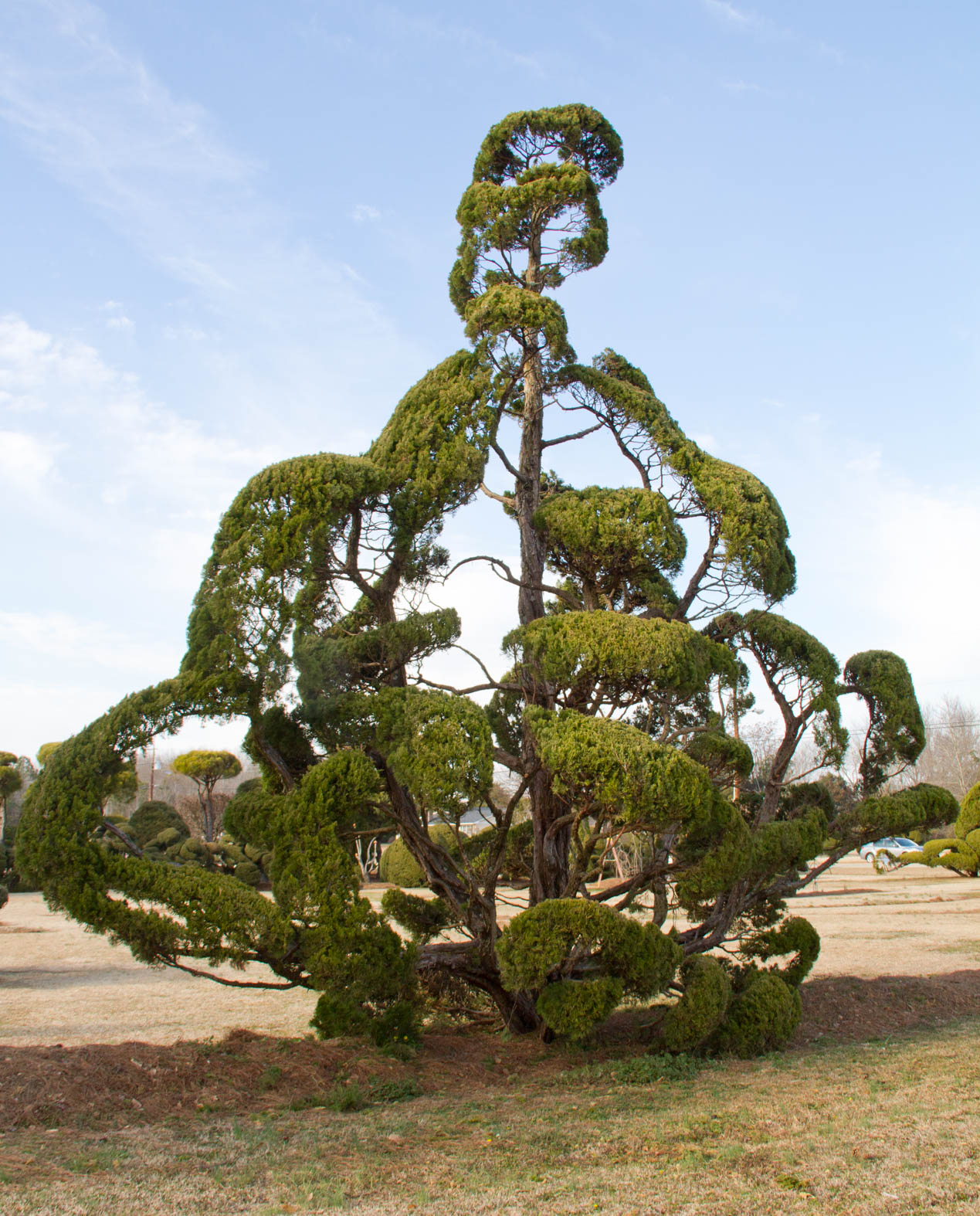 This wonderful Fryer ship sails across a dry lawn in the small town of Bishopville.

Fryer’s creations have inspired his neighbours to try their hands, and many have succeeded wonderfully. 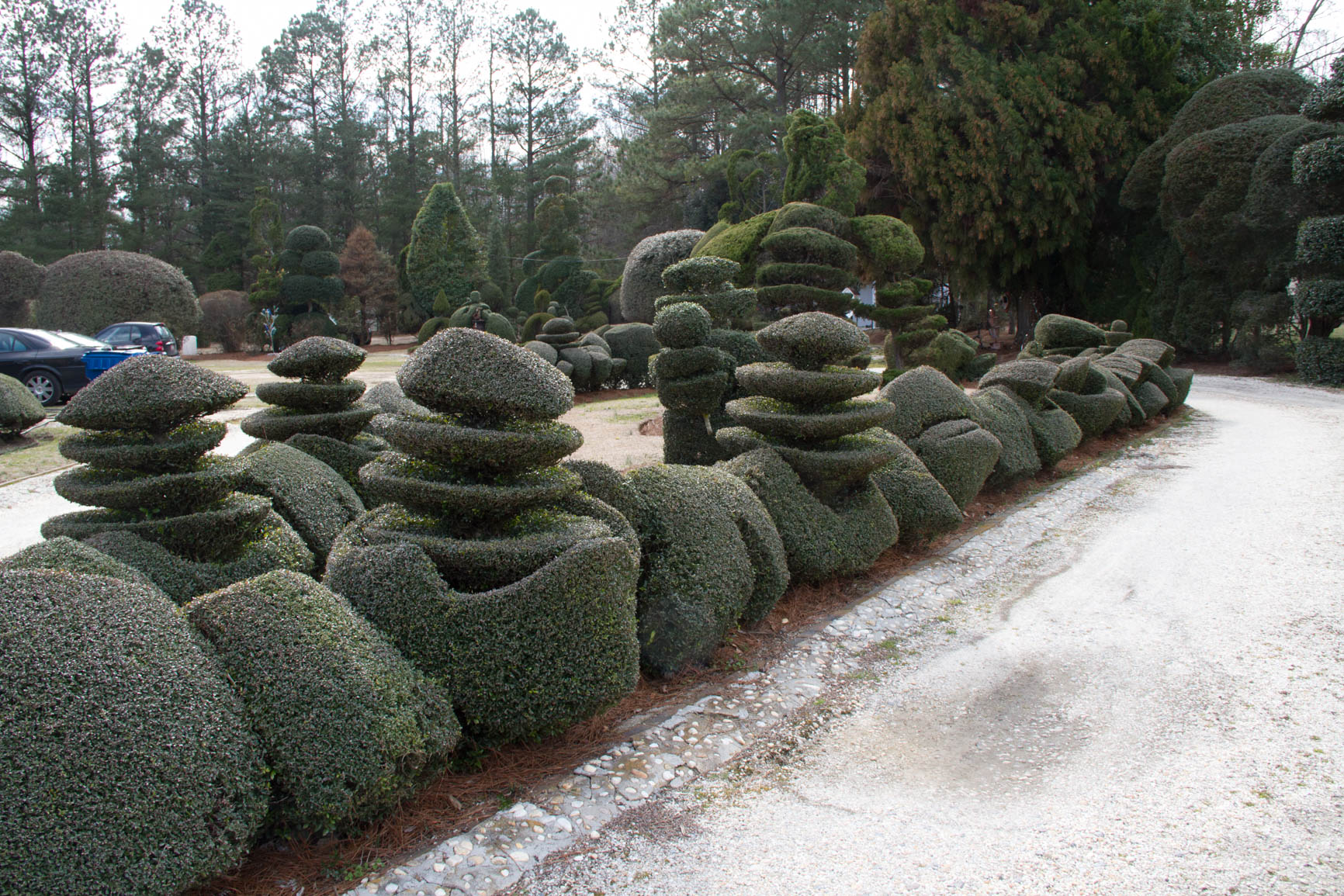 Down the street from Fryer’s garden is this driveway, lined with delightful shrubs.

The plants used in topiary are evergreens, mostly woody ones with small leaves or needles. They have compact or columnar growth habits and dense foliage that allows them to be shaped into a variety of forms. Commonly used are boxwood (Buxus sempervirens),  arborvitae (Thuja species), bay laurel (Laurus nobilis), holly  (Ilex species), myrtle (Eugenia or Myrtus species), yew (Taxus species), and privet (Ligustrum species).

I could grow many of these in my cold, Quebec garden and have often thought about where and how I might use topiary. But without taking advantage of the wire cages that are now available (which seem to me somehow like cheating), I doubt I have the patience or the steady hand to create a successful form.

So for now, I’m content with the Christmas tree that hangs by the front door and another that stands outside on the deck, decorated with lights.

What about you? Do you like topiary? Does it feature in your garden or have you ever tried to create a geometric or representational form? Or like me in former days, do you think it is an abomination?

Each bird is slightly different, and each has its own personality.

I’m crazy about topiary, Pat, and one of my dreams is to visit Pearl Fryer’s garden – plus a bazillion gardens in the UK that practise the art. Great photos, by the way. I’m with you in thinking that all gardens are some kind of intervention with nature. But I tend to be a fangirl of anything that’s done with great enthusiasm, even what others might call gauche. In fact, I came across a great quote the other day that sums this up beautifully. “Whosoever loves much performs much, and can accomplish much, and what is done in love is well done!” – Vincent Van Gogh

Fryer’s garden is a must-see if you are anywhere close by. He is very engaging and loves to chat to visitors. My dream is to get to Levens Hall. One of these days, perhaps.

Love the quote and agree with the fangirl sentiment. Who cares if it is gauche?

Always, have been a big fan of Edward Scissorhands! All the best to you and your family for the holidays! Hope Will is getting better!

Yes, a big thumbs up for Edward Scissorhands. Will is improving slowly.

I think the topiary man mowing his lawn is meant to be tipping his cap in greeting, the old-fashioned greeting matching the old-fashioned lawn mower. I think I like it best when there is a mix of clipped shrubs with exuberant planting. In my own garden, I’m considering clipping the spireas into meatballs to contrast with the hydrangeas that kind of fling themselves all over.The Hampton Court Palace look is not for me, but I enjoy seeing the fanciful ones in other gardens.

You may well be right about the lawn mower man — I couldn’t make out what he was doing. For me, the humour in topiary adds a real lightness to a garden and shows that the gardener, at least, is having fun. I couldn’t live with the Hampton Court Palace look but I admire its historical authenticity.

I like topiary when it is creative, and especially when it has a sense of humor.

I agree, Jason. Humour is such an important element in the garden… better to lighten up and smile.

Happy New Year to you and Judy.