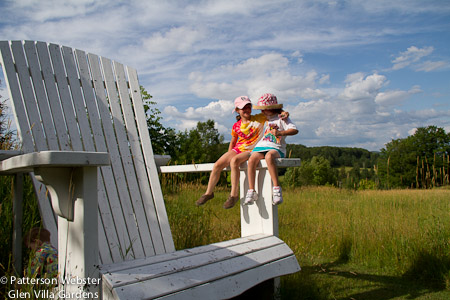 Recently I saw a photo of a giant yellow ducky floating in Hong Kong harbour. Called Spreading Joy Around the World, it’s by the Dutch artist Florentijn Hofman. And it is BIG: 54 ft, or 16.5 metres, tall. 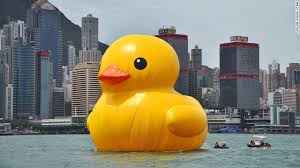 The artist said it was intended to make people feel happy. It worked. It made me smile.

It also set me thinking about the impact of size in a landscape.

At Glen Villa, the Big Chair always brings a smile. From a distance, it’s hard to appreciate the scale. But once someone sits in the chair, its giant size becomes apparent.
The chair was created by NIP Paysage, a firm of young and inventive landscape architects based in Montreal. I first saw the chair at Canada Blooms, in an installation designed by the Reford Gardens in Metis, Quebec. As soon as I spotted it, I knew it was the chair I’d been looking for.  Based on the traditional Adirondack chair, the Big Chair is a surefire success. It’s a rare visitor to Clen Villa who doesn’t climb up to have their photo taken. And everyone who does feels like a child again, and smiles.
Oversized objects carry a strong message. They disturb our sense of balance, confuse our impressions of distance and perspective. Small objects can do the same. A smaller-than-normal object set in the distance lengthens a view. Close at hand, something smaller than expected can make us laugh.
This tiger was tucked into a planter on an outdoor mantlepiece at Chanticleer, a very fine public garden near Philadelphia. I love the touch of colour it adds, and how it transforms a group of tiny shade-loving plants into a pint-sized jungle.

Playing with scale and perspective in a garden isn’t a new trick. André Le Noôtre worked his magic in the 1600’s at Vaux-le-Vicomte, south of Paris. At the end of a kilometre-long expanse, he placed a statue of Hercules silhouetted on the horizon. The statue was so large that it made that one kilometre appear much shorter. To add to the trickery, he contoured the land, entirely concealing a canal and the grand staircase and statuary that led to it.

Standing on top of that stone wall and looking back towards the chateau, you get an idea of the distance. And you see what previously was hidden from view: an impressive canal.

The British landscape designer Russell Page liked to play with perspective, narrowing a path as it receded to increase the sense of distance. Other designers have planted trees closer together the farther away they are, or even have planted shorter trees, all to accomplish the same visual trick, to make the distance seem greater than it is.
This photo came with a (probably apocryphal) story about a woman who couldn’t get permission to build a shelter for her horses. Could she put up a table and chairs? No problem, came the response.

Confounding expectations adds fun to a garden. The rubber ducky doesn’t even have to be big.

Rubber duckies always make me smile. Do you remember Ernie’s Sesame Street song about his?

To say I’m pleased with the project is an understatement. I think it looks fantastic, and will only get better with time.

If you are looking for a holiday in sitiges then visit our website: http://www.searchsitges.co.uk. we are the No. 1 Company For planning a holiday in Uk.