The Yin Yang is Remade 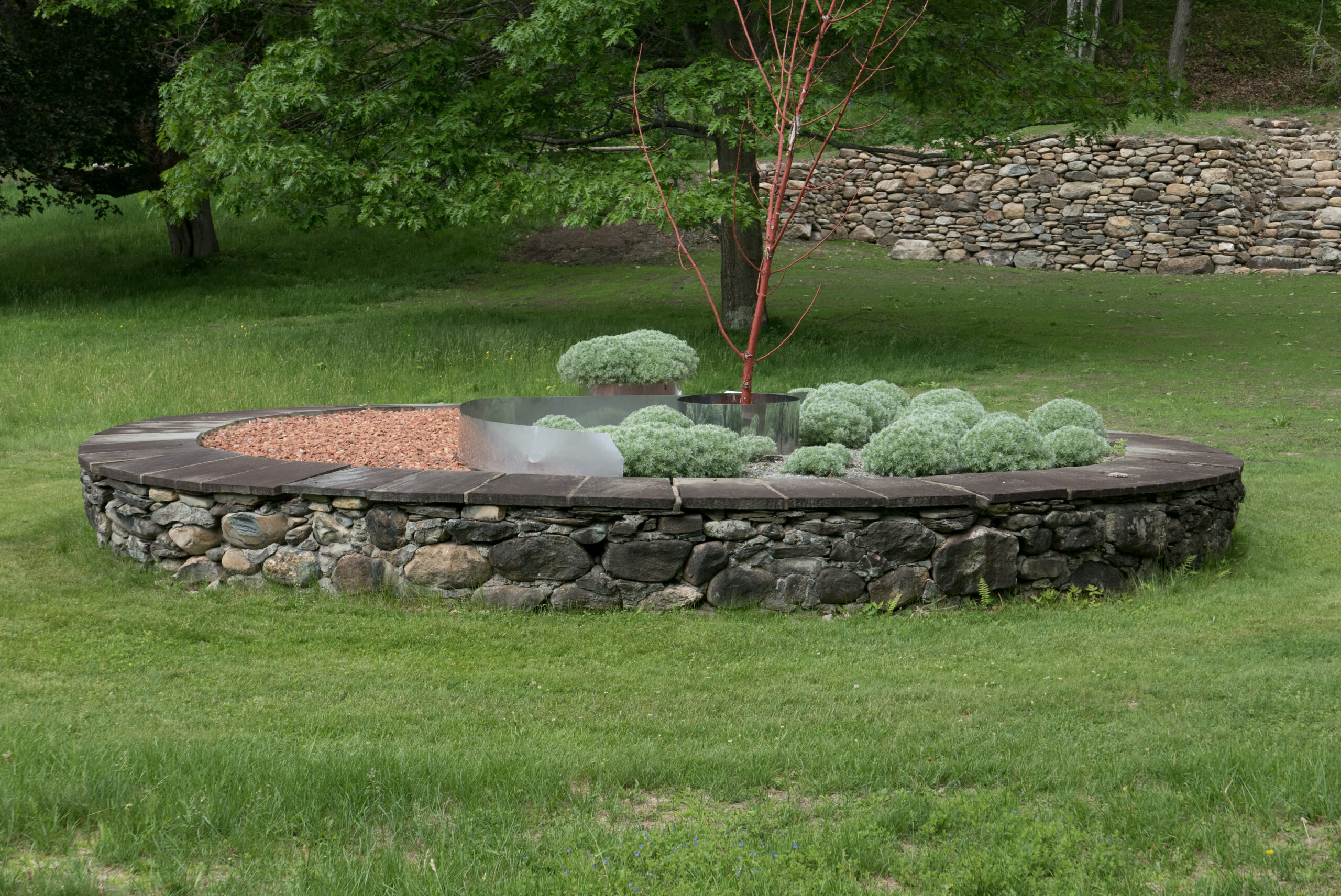 You know how one thing leads to another? That’s what is happening this year at Glen Villa.

Last November we began to rebuild the foundation wall of the old Glen Villa Inn.  Once the job was complete and I saw the impressive wall, I knew it needed a garden to complement it. The result is the newly planted area, the North South Arrow, now beginning to grow in.

Between the hotel wall and the Arrow is a low circular stone wall. Its original purpose was to provide a turn-around for horse-drawn carriages bringing guests to the old resort hotel. When we moved into Glen Villa in 1996, it was planted with highbush cranberry. As much as I admired the shrubs, I thought they were too tall and out of balance with the wall itself, so I removed them. I realized not long after that I wanted the garden to illustrate our family’s lives and the history of the site, so the circle became the Yin Yang, a symbol that recalled the years our family lived in China and that described an approach to nature that I found appealing, one based on a balance between opposites. 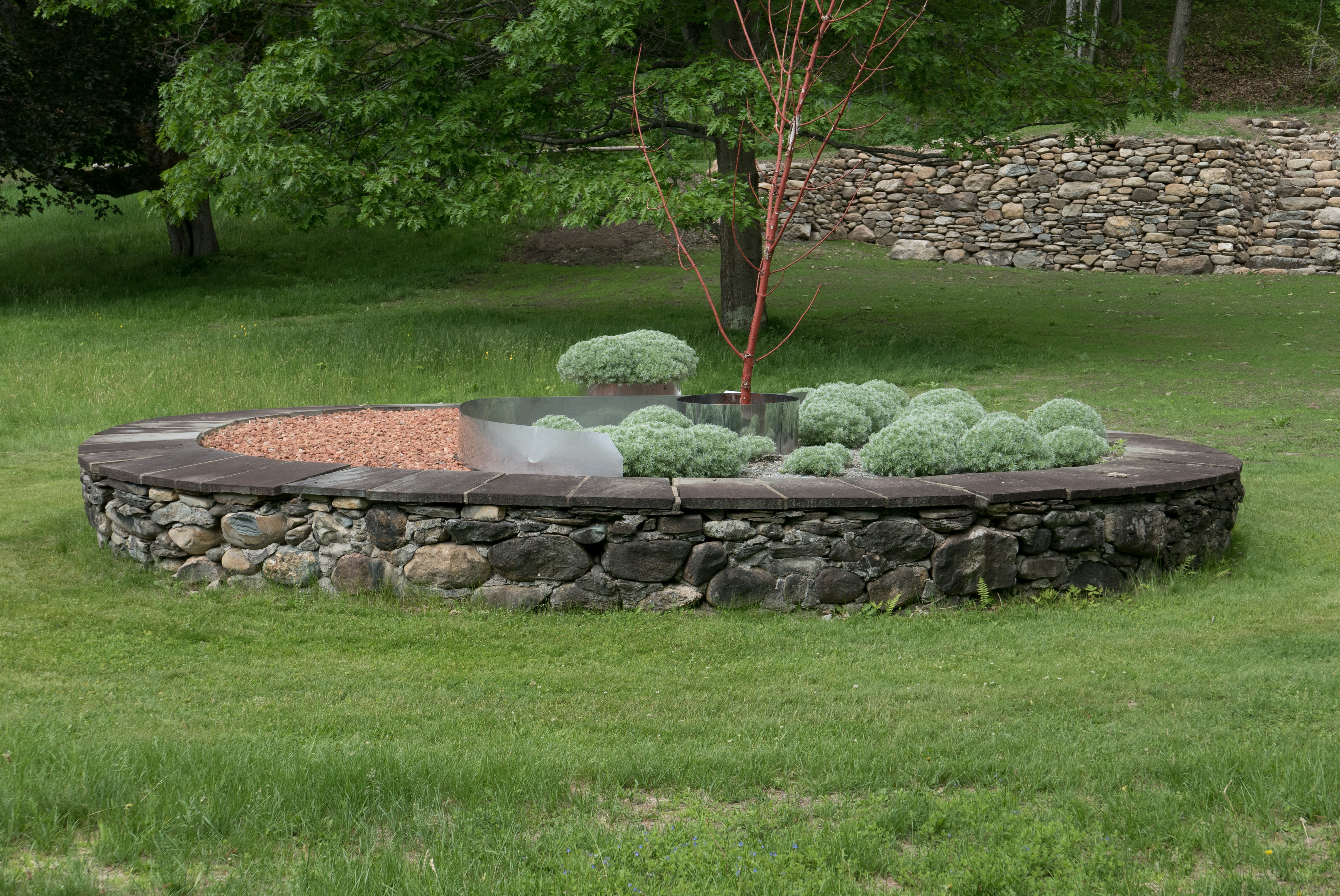 I designed the Yin Yang in 2005 and by last year I was thinking about re-making it in some way, in part because the wall was beginning to collapse. The coping stones I added made this obvious.  They sat tight next to each other at first but after a dozen years, the gap had widened. The circle was spreading, the wall falling outwards, inch by inch. 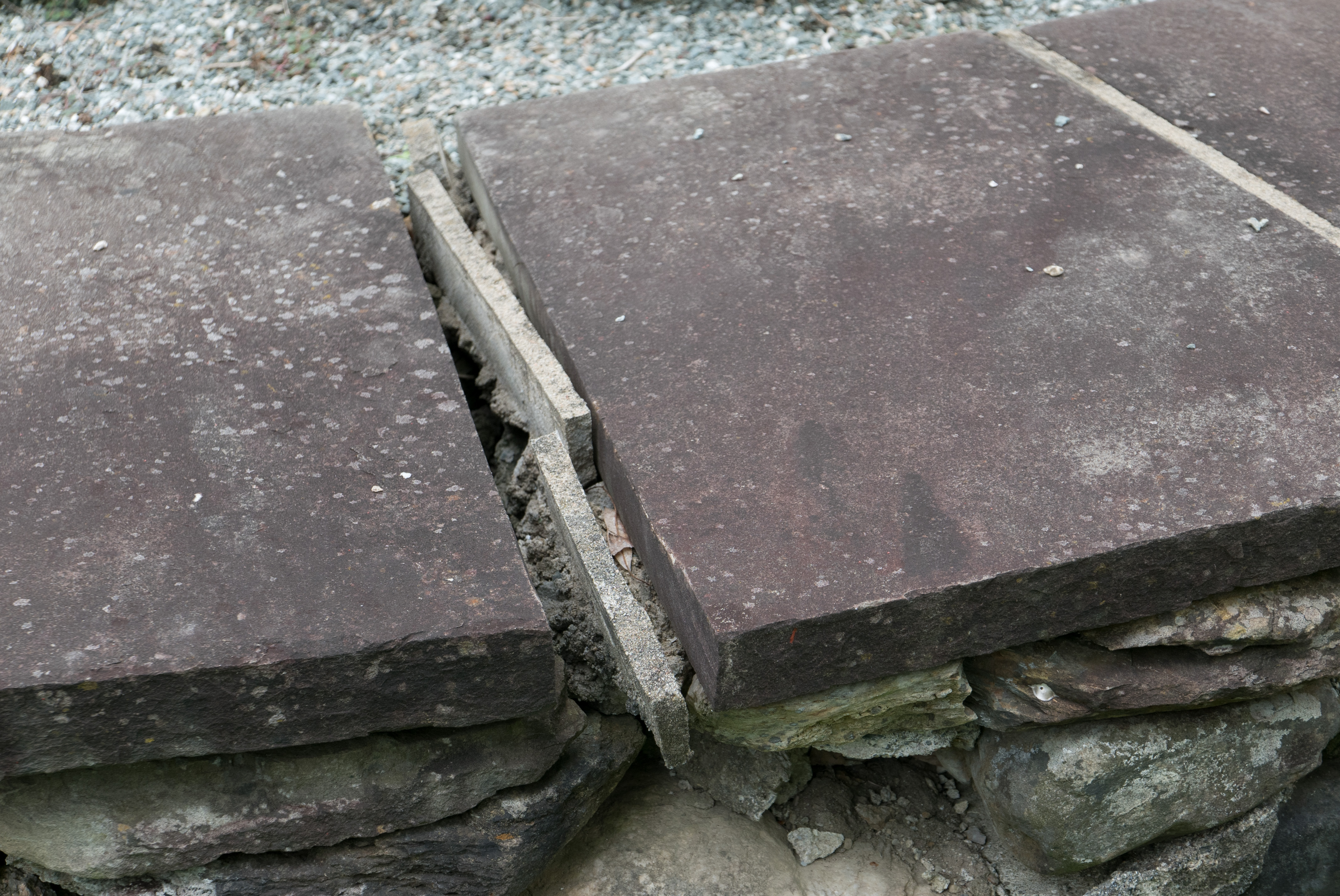 As soon as the coping stones were removed, it began obvious that the wall underneath was crumbling and had to be totally rebuilt. 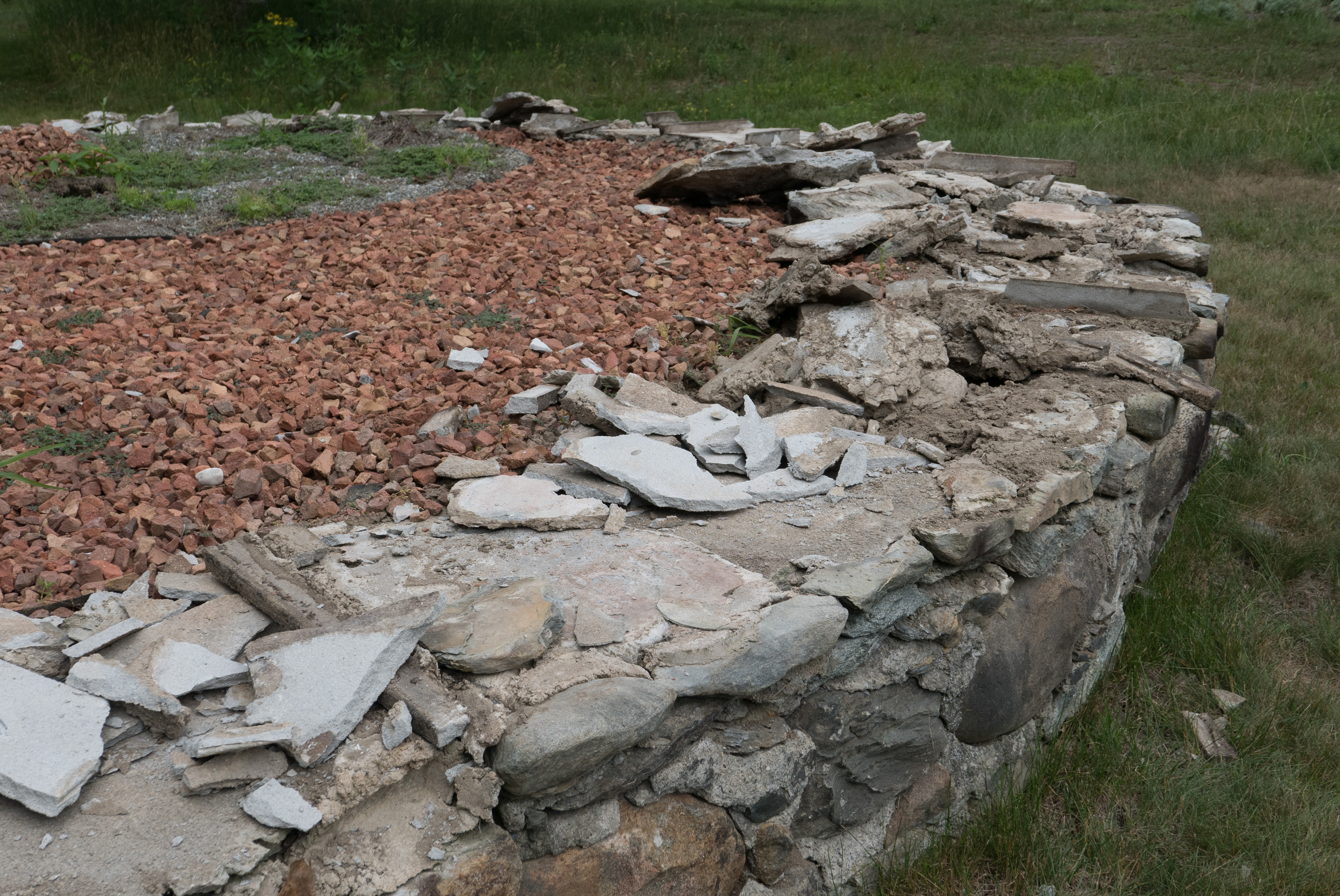 First, though, it had to be taken apart. 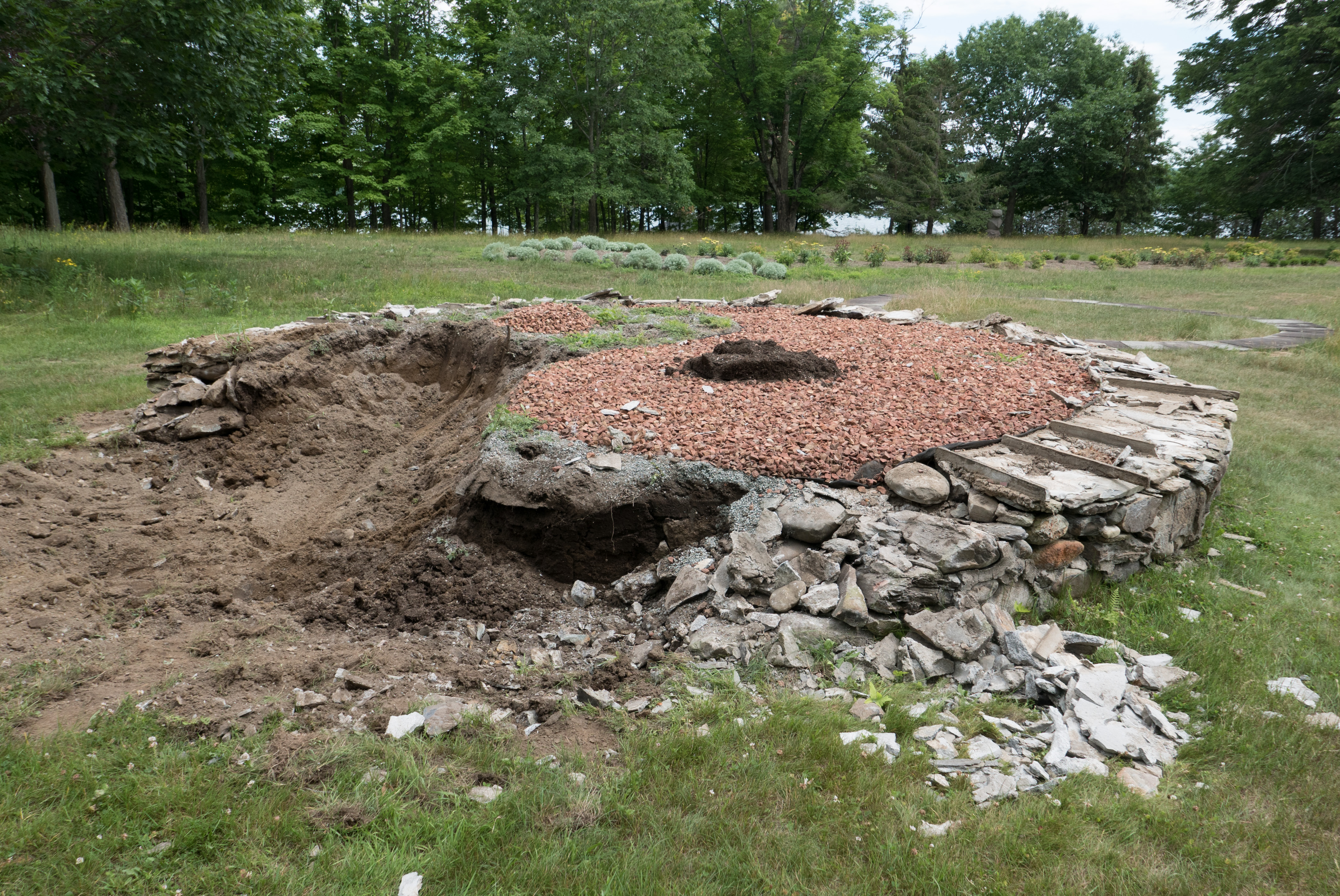 François Langlois rebuilt the wall, helped by Jacques Gosselin and Ken Kelso. They laid out the coping stones in a perfect circle on the ground nearby and prepared a new circle to match, laying a strong foundation with proper drainage. 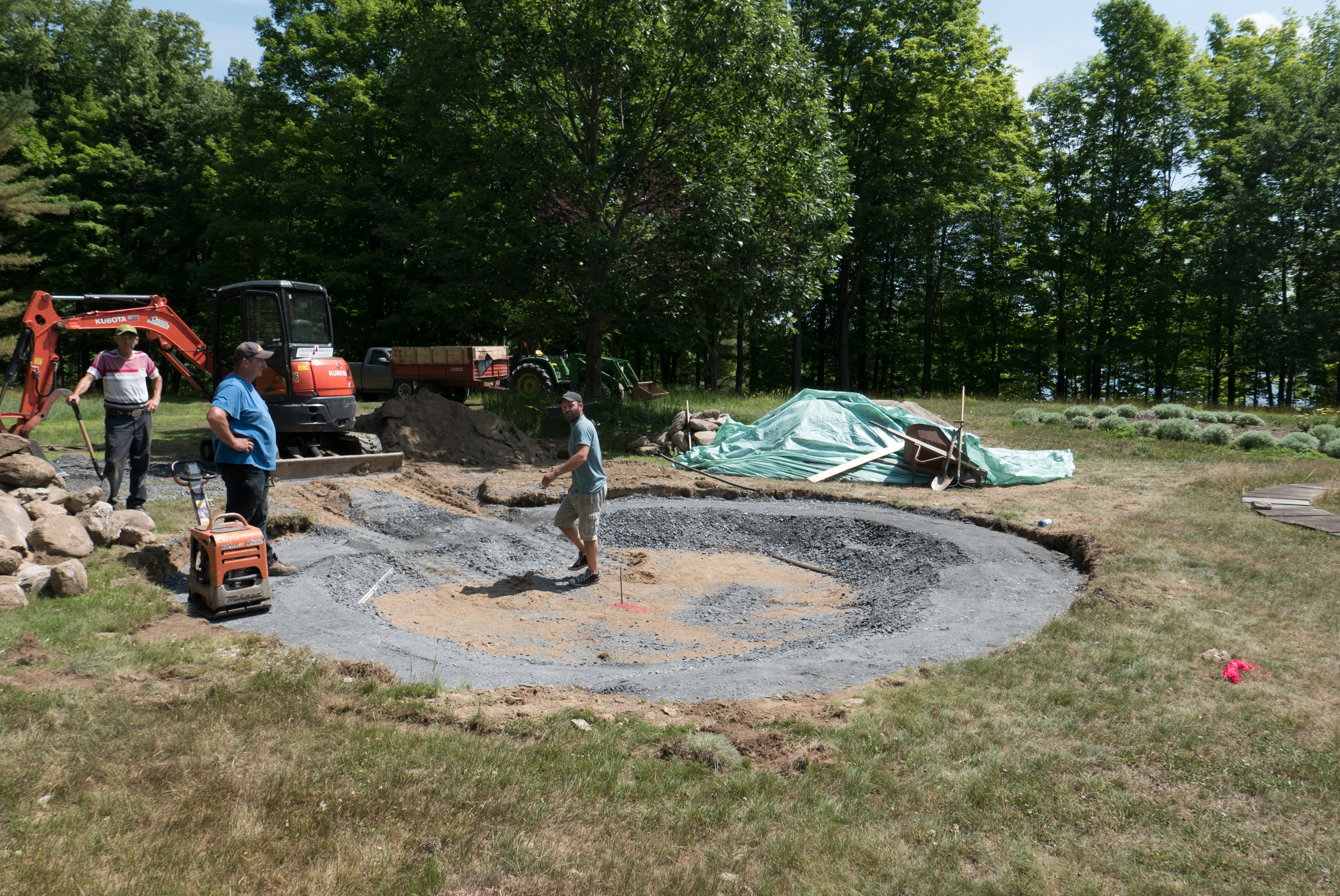 They poured a cement base. 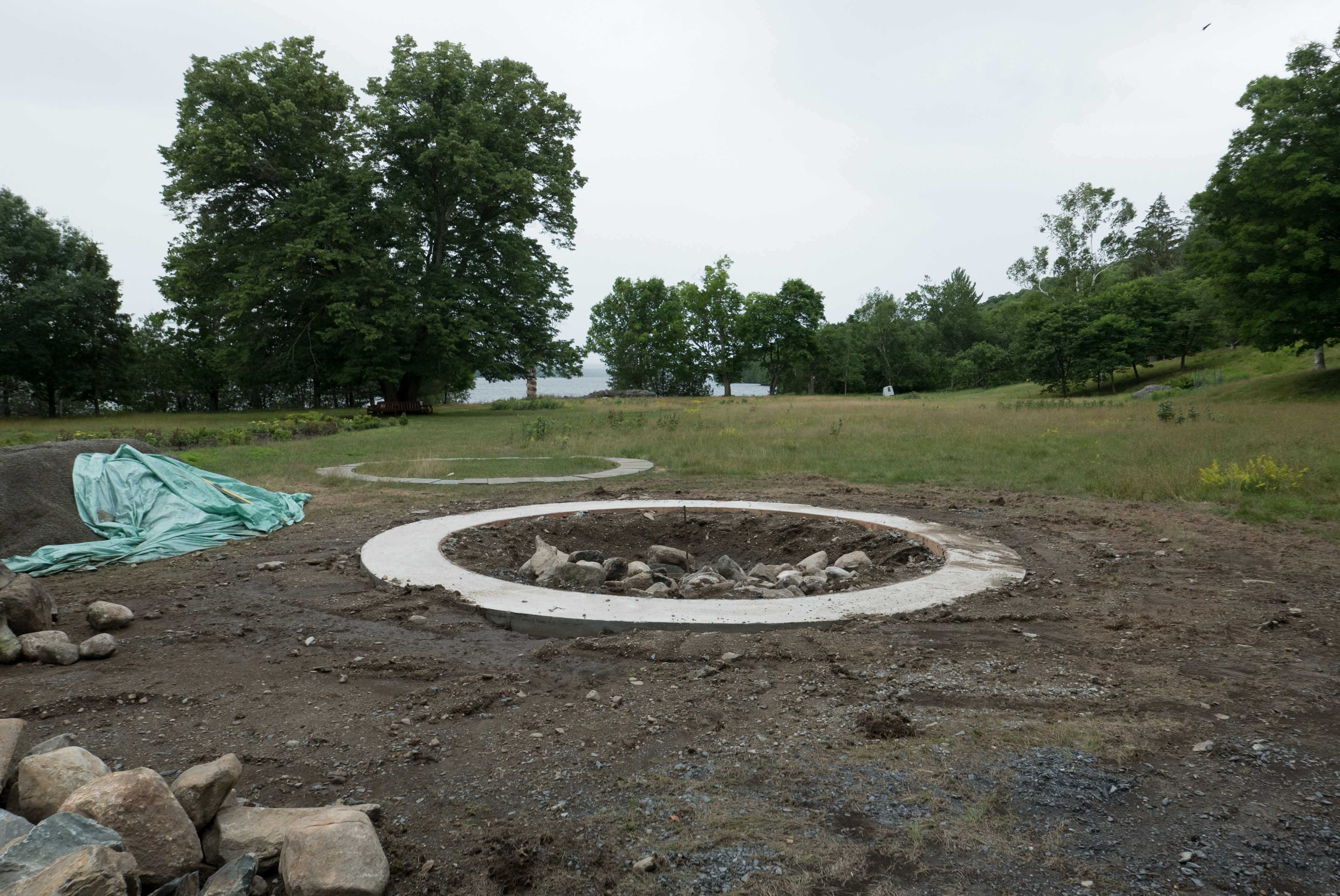 Once it had cured, François began to rebuilt the wall. 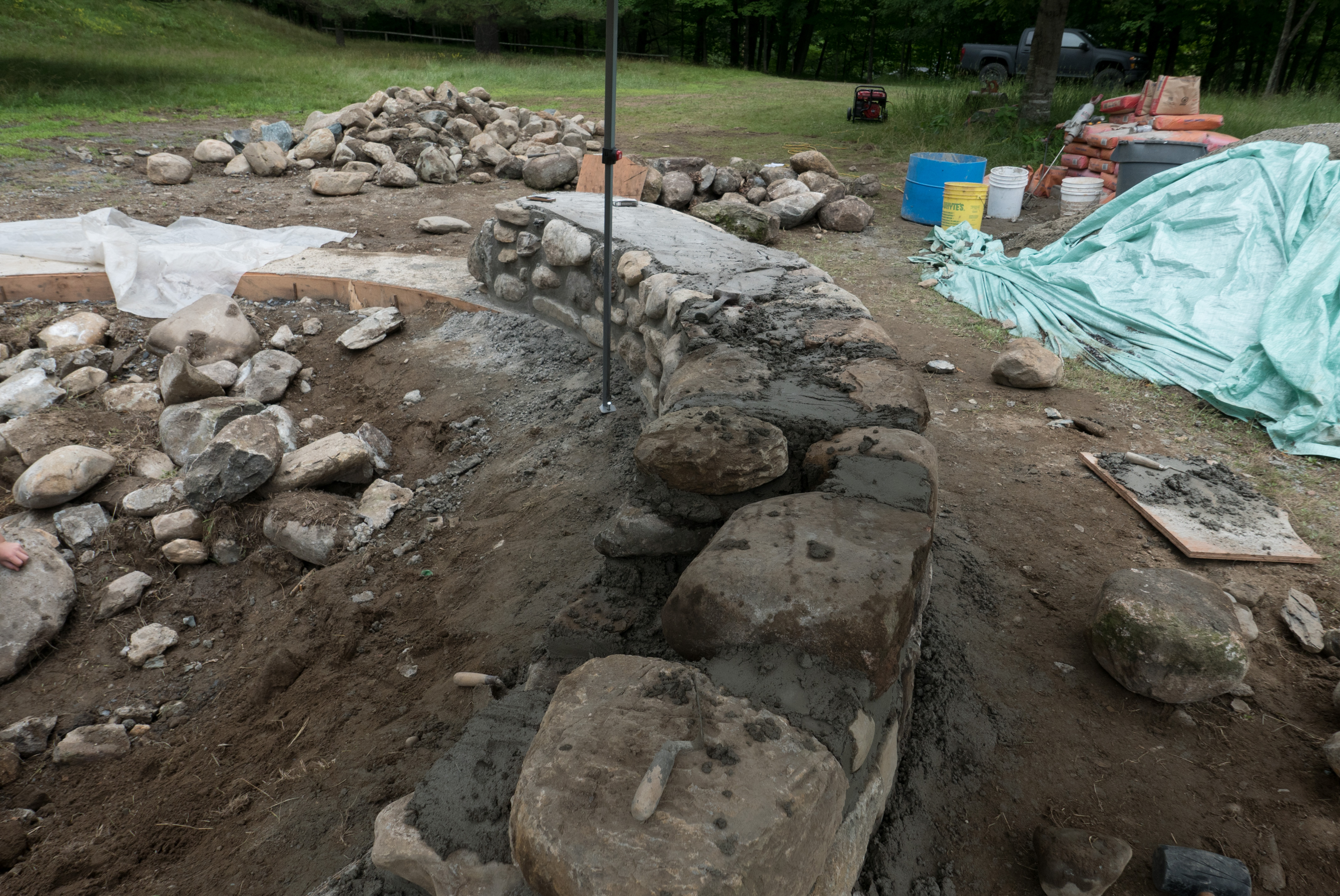 After a few weeks of work, the wall was finished. Filled with good soil, it is now ready for planting. 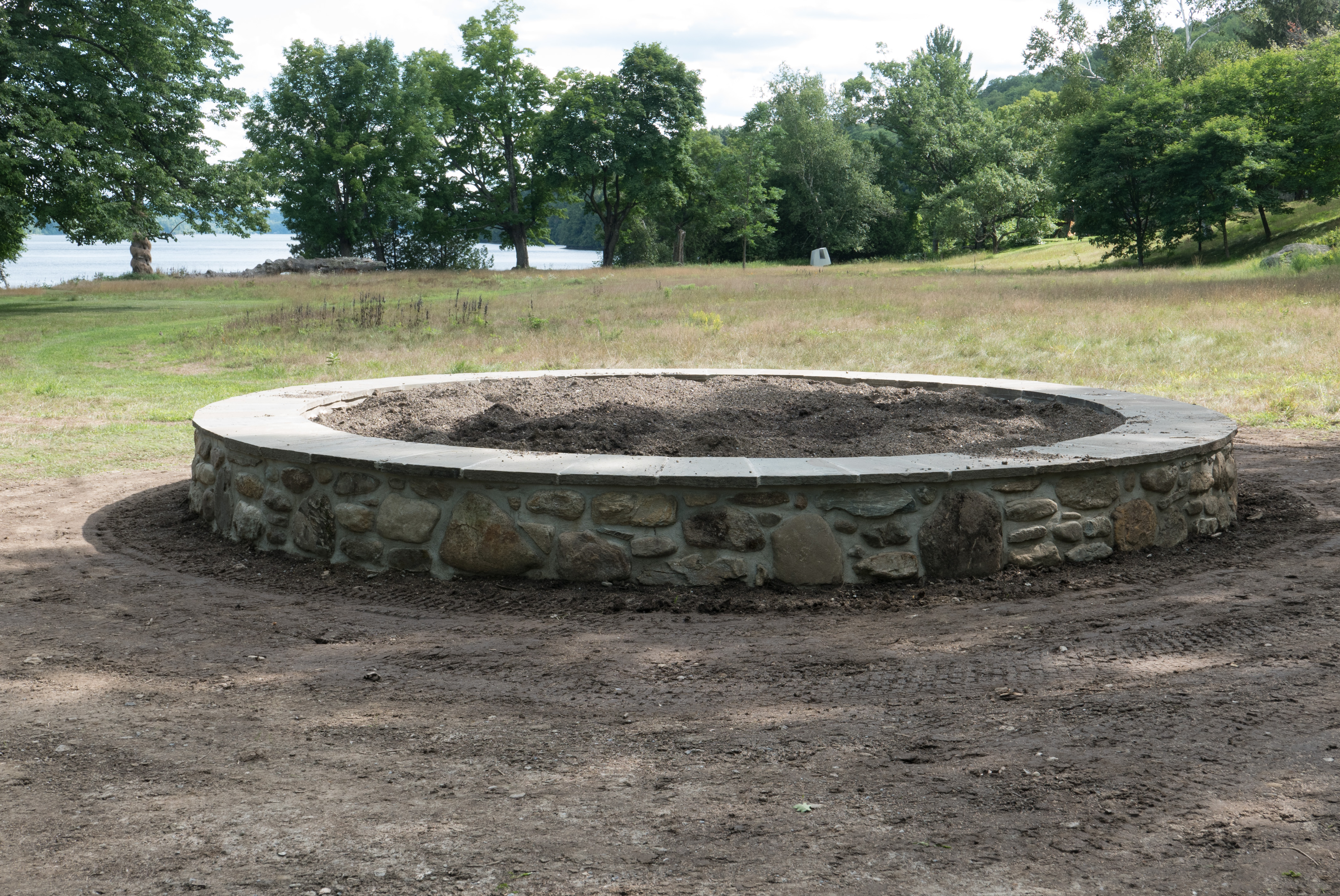 But with what? and as what? I wanted an idea that would link the circle with the foundation wall on one side and the North South Arrow on the other. 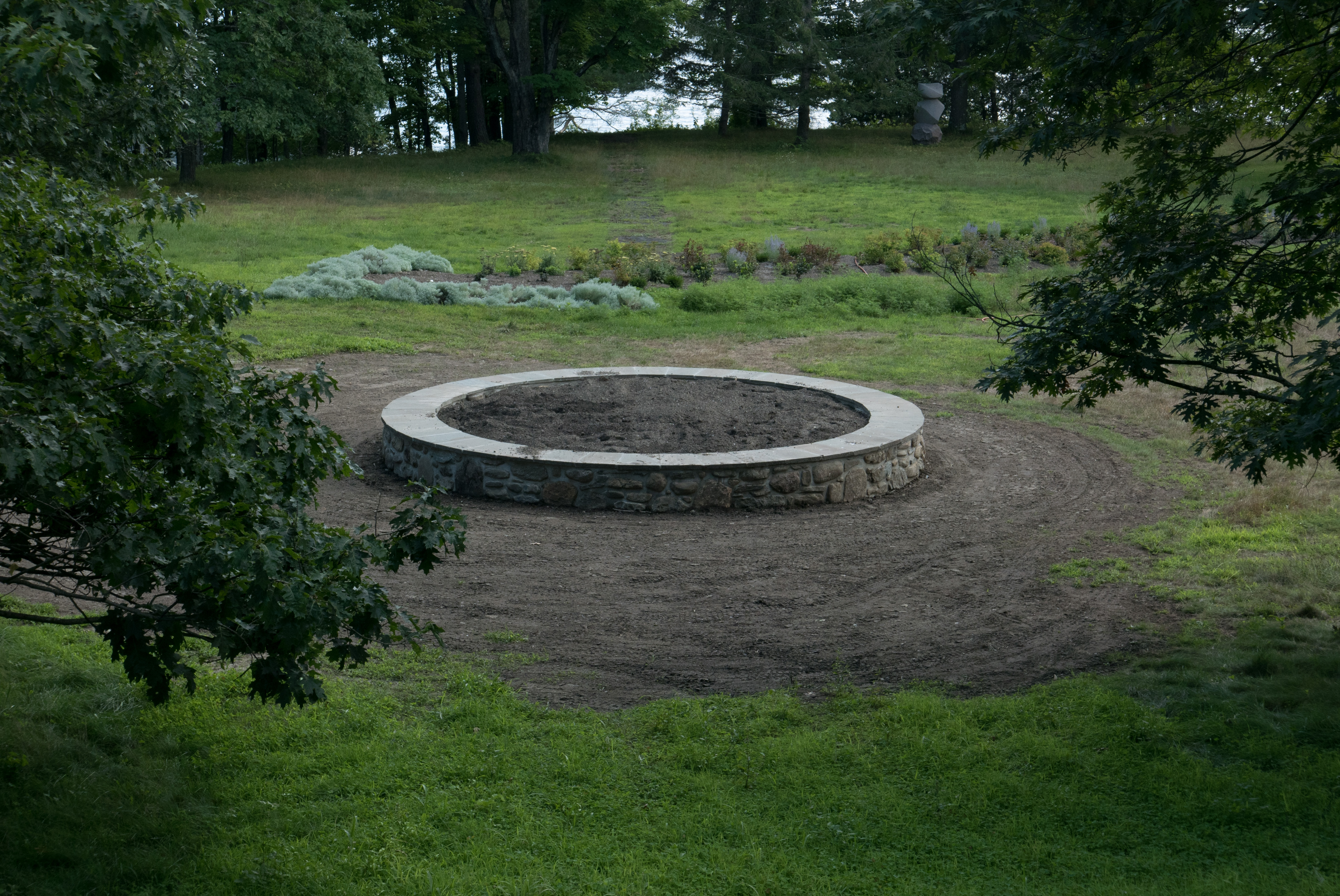 I was standing on top of the hotel foundation wall when I took this photo. The North South Arrow is in the background. The Artemisia ‘Silver Mound’ that was part of the Yin Yang now outlines the arrowhead that points north.

It didn’t take me long to come up with an idea, in fact it came in a flash. The  Arrow is a straight line, pointing north and south, reflecting the fact that most of the guests at Glen Villa Inn came by train from southern states in the U.S.  The north-south symbol on a map is circular, and it is called a compass rose. What could be more appropriate? 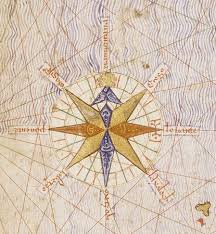 According to Wikipedia, this was the first ornate compass rose depicted on a chart, from the Catalan Atlas (1375), with the Pole Star as north mark.

The combination of direction and plant name told me right away that roses were the thing to plant. (And this despite the possibility of Japanese beetles.) Its name was obvious as well: no longer the Yin Yang, it is (or will soon become) the Compass Rose.

My job now is to select roses best suited to the site. I haven’t settled on colour or colours or how to arrange the bushes but I’m leaning towards hardy shrub or floribunda roses, ideally varieties that are highly fragrant. The Canadian Explorer series offers some interesting choices but there are many other options, including old roses that were available in 1902, when the hotel was built.

I like the idea of roses available when the hotel was built, but I don’t know what those are. I bet Lee Ginenthal of DerRosenmeister Nursery in Ithaca, NY would know, or would know the easiest way to find out!

Once things calm down here, I’ll start to research different varieties. I’m hoping there are some that the Japanese beetles don’t like!

I love the idea of Explorer Roses, especially given the compass reference. My favourite is David Thompson. The Ancient Mariner is an Austin rose with an appropriate name.

The connection between exploration, maps and compasses is one reason I am leaning towards the Explorer series. David Thompson is a definite possibility.

I don’t have any suggestions about roses, but lovely to rejuvenate a garden space.

Planting roses may be risky but the idea is too appealing to ignore.

Thank you, Norma. I’m glad you found it interesting.

Such a nice blog on the yin yang is remade and I hope you keep update us with such great tips and information in future too. This is a great post; I will share as much as I can.Found an another website Expertturf.co.nz it has lots of valuable information for everyone.

I am so happy I found your blog and I absolutely love your information on it’s about the yin yang is remade and the tips you have shared are awesome. I liked and it is wonderful to know about so many things that are useful for all of us! Thanks a lot for this amazing blog!!This resource Urbanturfsolutions.co.nz i came across recently and is nice too as this particular site.