The Value of Criticism 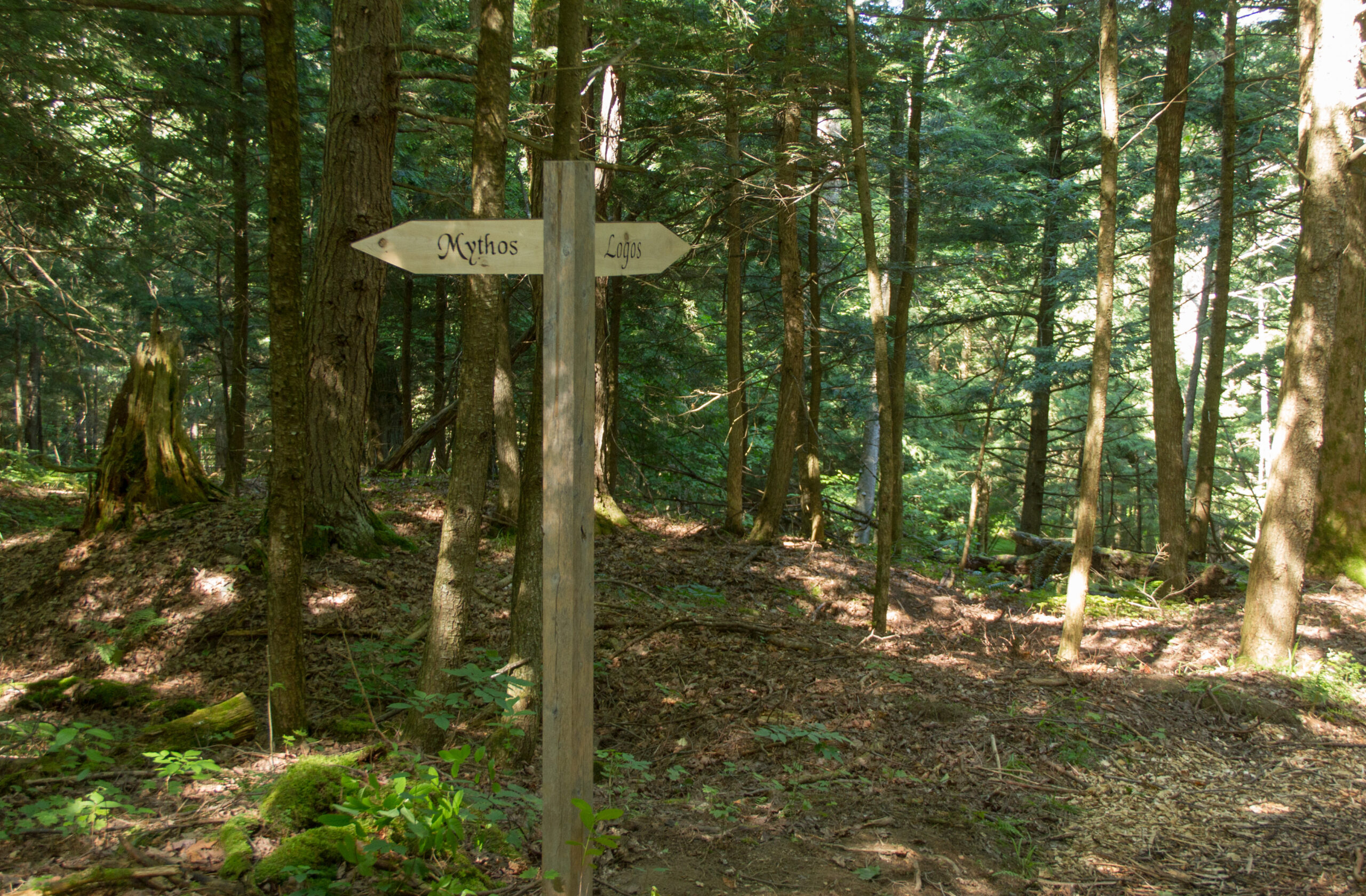 Recently an article titled “Gardens Need Criticism” was posted on the garden website Veddw. Written by Veddw’s garden maker Anne Wareham and originally published in Garden Design Journal in 2002, the article prompted me to think about the art of critiquing gardens and the art of receiving critiques.

Last year a well-informed group of landscape architects and designers visited Glen Villa. I invited comments, and at the end of the visit one person quietly made a suggestion about a section of Timelines, the trail I’ve been working on for the last few years.

His comment concerned Mythos. There’s not enough of it, he said. It’s too short. The path doesn’t lead anywhere. 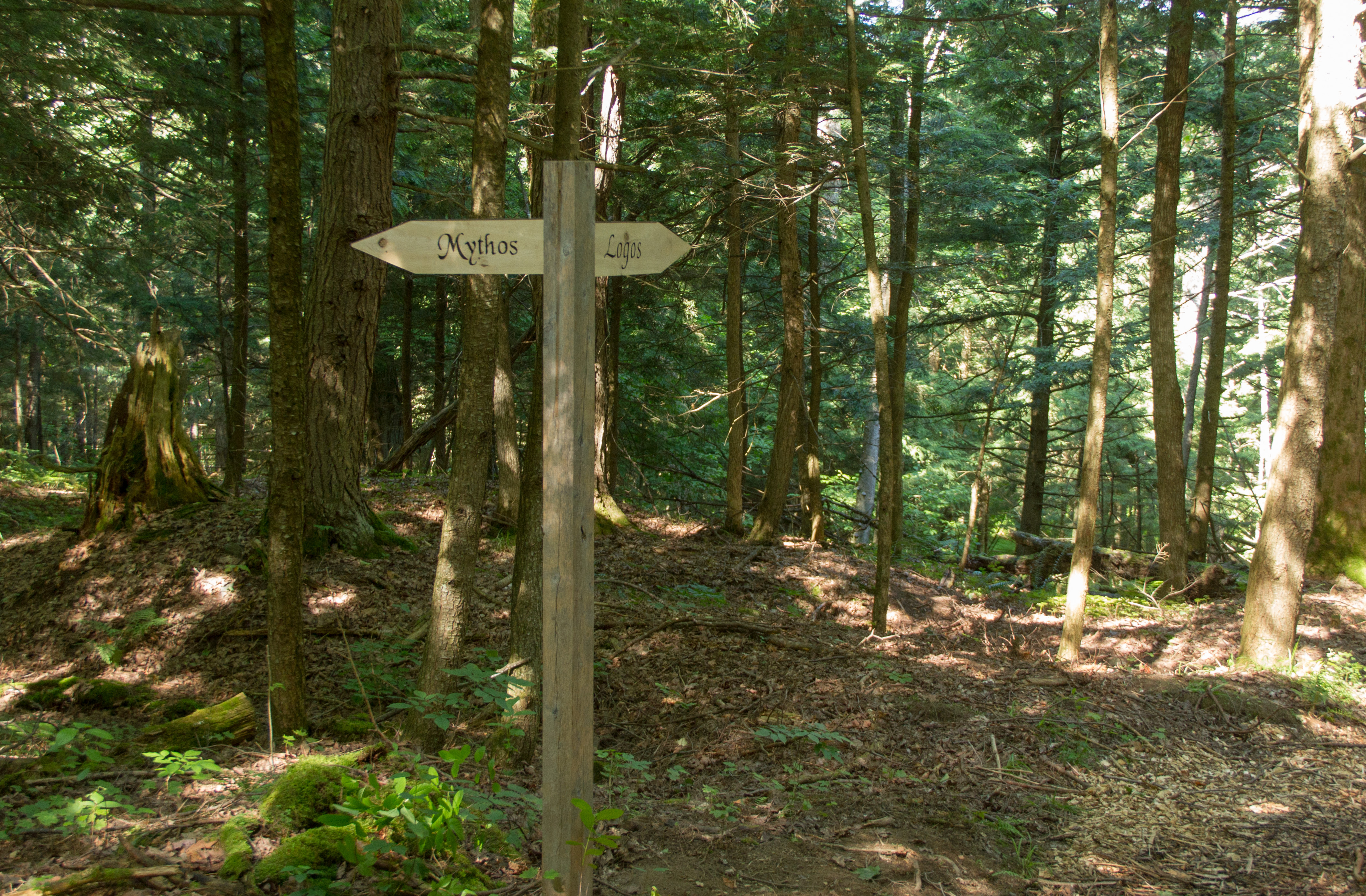 A sign pointing to Mythos led only a short distance into the woods. Most people walking the trail ignored the sign and continued along the main trail.

He was right. A barely visible path led from the main trail into the woods and ended at the small seat you see at the left in the photo below.

I expected walkers to notice that faint path and to follow it to reach the low seat, constructed from corrugated tin with a polished slice of wood on the top. I expected them to sit down and peer into the mirror on the ground in front of them. Slightly tilted, they would see themselves reflected against a backdrop of trees and sky. This, I hoped, would make them think about what it meant to see themselves in this way. At best, it might prompt questions about how we relate to our surroundings, or about vanity, or about self-examination and the search for self-knowledge. 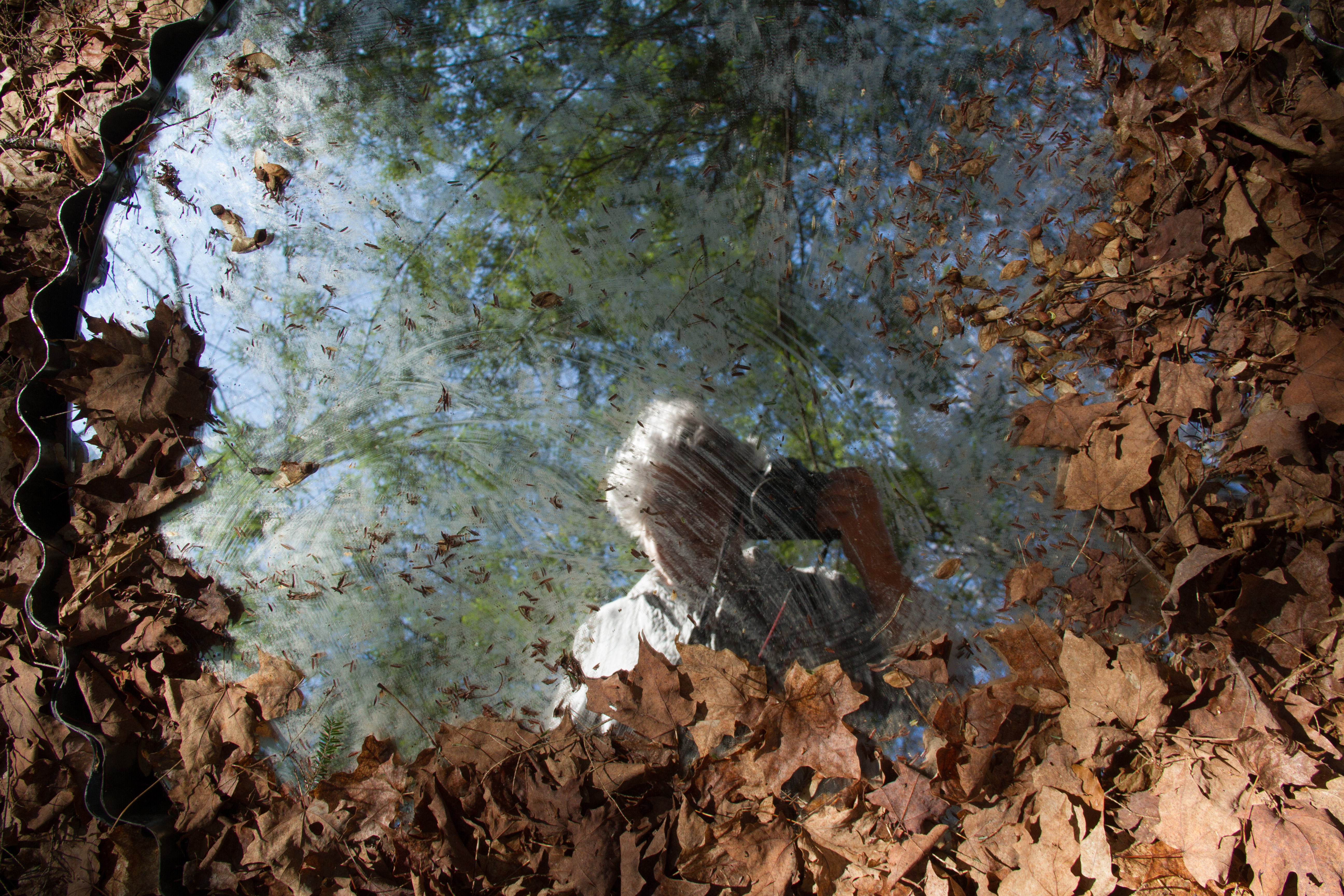 Here I see myself photographing my reflection, not to produce an image fit for a glossy magazine but to make myself part of the picture.

I based this arrangement on an experience I had when visiting the thought-provoking Italian garden, Il Bosco della Ragnaia. There, in a secluded spot, visitors are invited to look down into a natural depression in the ground, to ask a silent question, and to wait for the oracle to answer. I did as instructed, and received an answer that startled me with its succinct encouragement. At Delphi, some fifty or so years earlier, I did something similar. There the oracle produced a less helpful, typically cryptic response to my question. But the memory of the places and acts remained strong.

When the visitor to Glen Villa suggested that the brief detour I had made wasn’t enough, I knew immediately that he was right. The path didn’t lead anywhere —  physically or intellectually. Mythos was a big idea and I was missing an opportunity to explore it thoroughly.

Over the fall and winter, I began thinking about myths in a more focused way. I thought back to my original motivation for adding the sign itself — which was to offer a choice. People could continue on the main track that led to Orin’s Sugarcamp, where history as we knew and had lived it was memorialized, or they could turn off to experience an alternate way of thinking. If they chose the side path, they would head into a forest that looked and felt ancient, like a place our ancestors might have inhabited, where the beliefs we now label superstitions shaped a different view of the world. 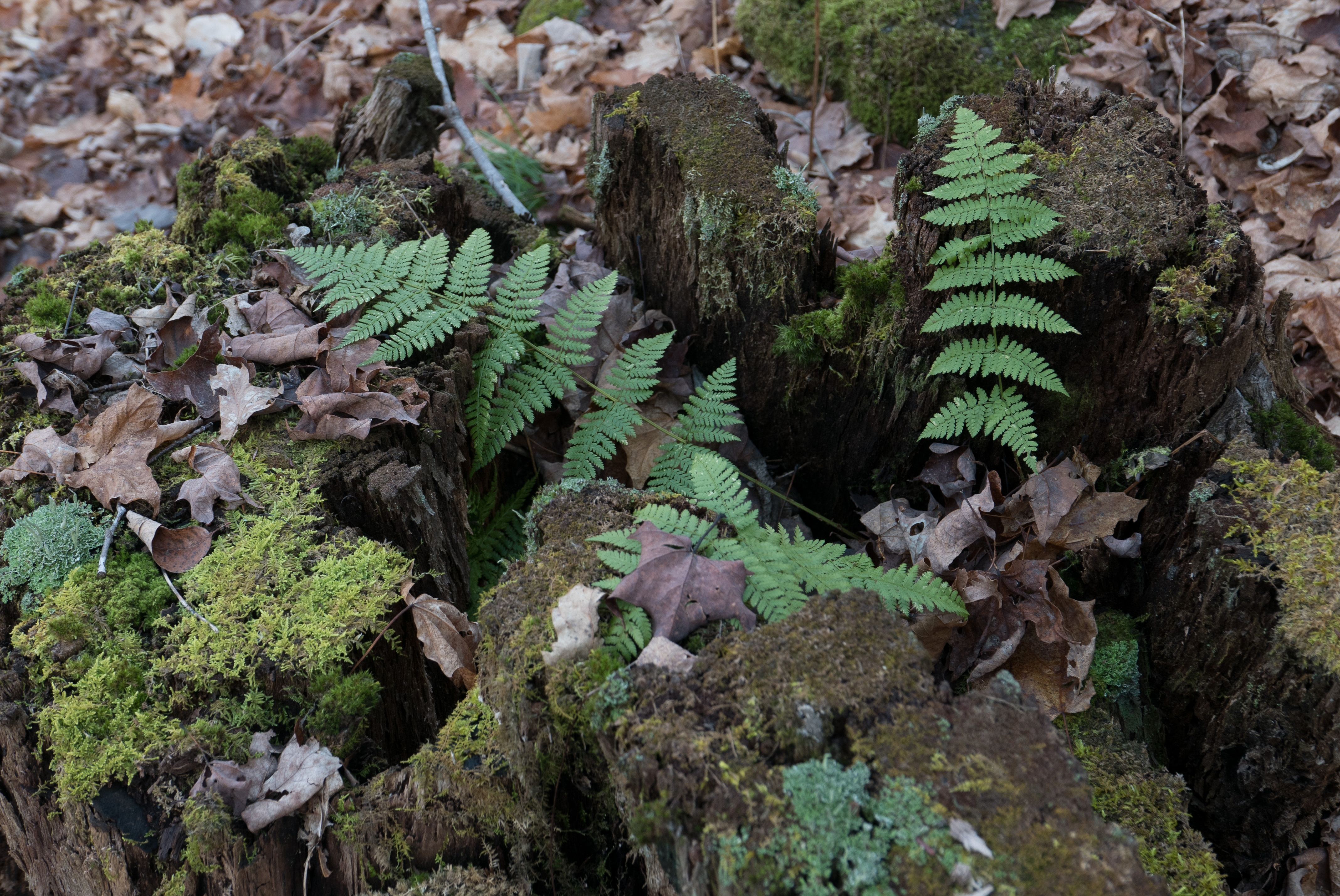 Moss, ferns and decaying stumps make up this part of the woods.

Since the sign pointing to Mythos came immediately after The Forms, an installation based on the ideas of early Greek philosophers, using Greek mythology as a guide to further explore the idea of Mythos versus Logos seemed an obvious choice. Yet so many of those stories are not female friendly and I did not want to perpetuate the belittling view that demoted Hera, the earth mother, into being merely the spouse of Zeus.

Offering an alternate reading of familiar tales was the project I set myself.  But I knew that I had to build on the familiar — the tale of Medusa turning men to stone, a jealous Athena transforming a young girl who bragged about her weaving into a spider, Narcissus becoming transfixed by his own image.

A spider web fit within the context of the woods so I set out to make one.  Experimenting on a small scale gave me a chance to learn how to make a larger web and to find a good place to put it. 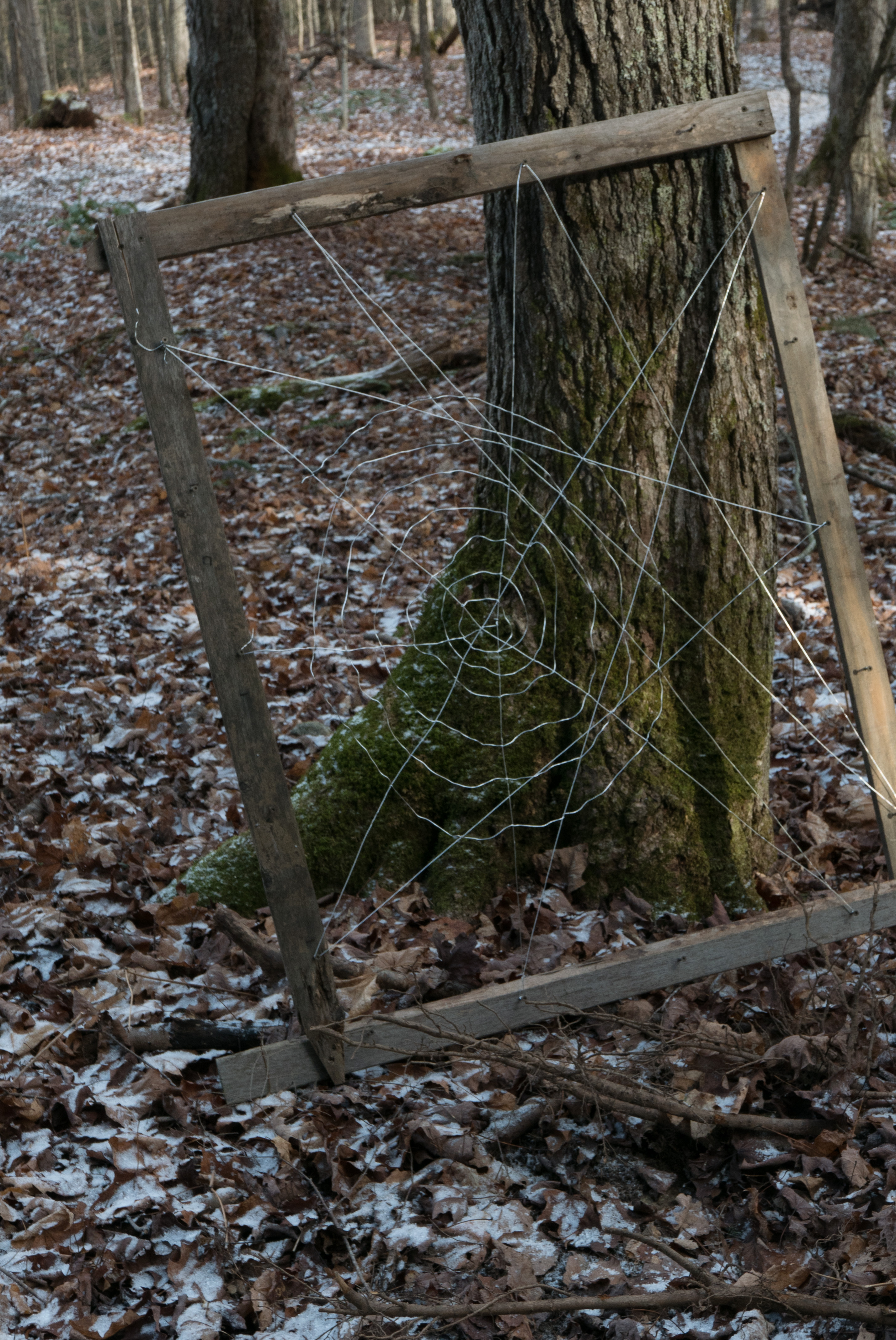 A rough sample small enough to carry around helped me choose the right spot for a big web.

A full-sized version is now waiting in the barn. We’ll install it between two trees once the snow has melted.

This photo gives an idea of the size of the web. It isn’t finished here — in fact, I was just starting to weave it when I took this photo.

Men turned to stone are ready to be placed. 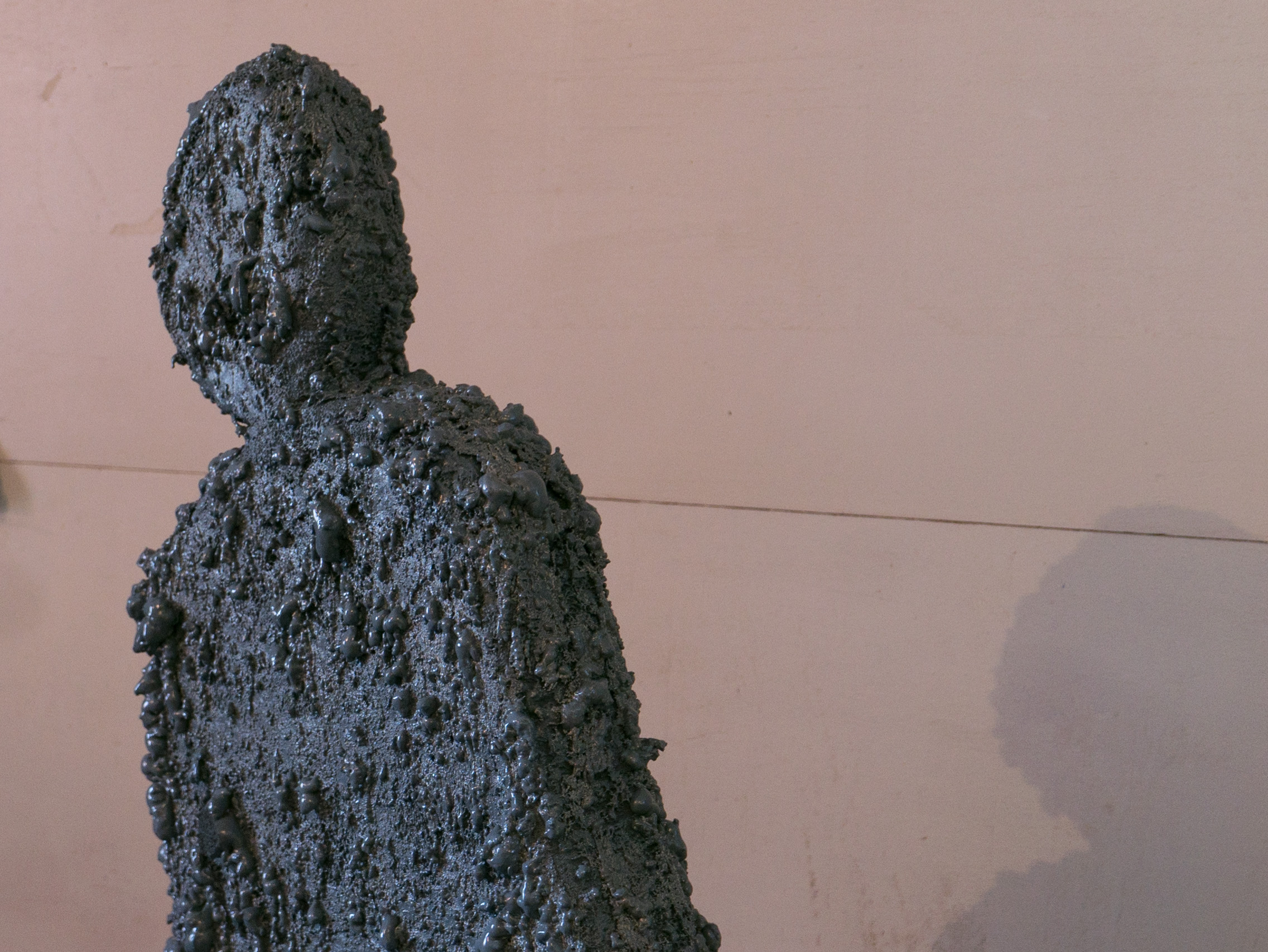 One of the seven stone figures I’ve made over the winter. To me they looks scary. Do they look that way to you?

Hera’s column, made from corrugated tin, is ready to be installed on top of a hill. Its elevated position is a testament to Hera’s importance and the letters that will appear at its base spell out a command that is also a play on words and the sounds they make. 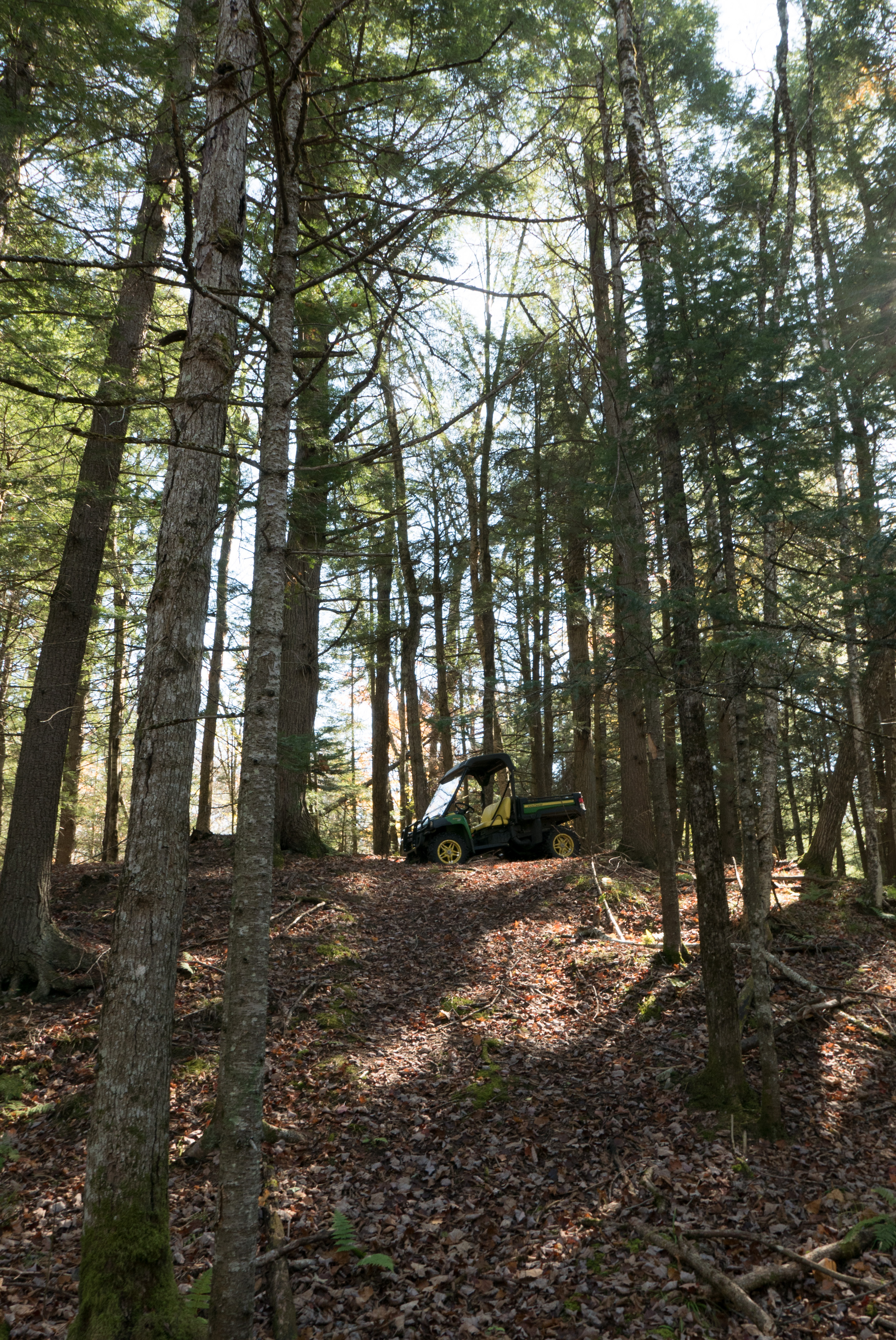 The column to Hera will be installed roughly where the four-wheel vehicle is.

I’ve moved the mirror and column that the visitor criticiqued to a spot near the end of this section of Timelines, shortly before the kilometre-long path rejoins the original trail. At the junction I’ll erect a sign with the word Logos and an arrow pointing towards Orin’s Sugarcamp. 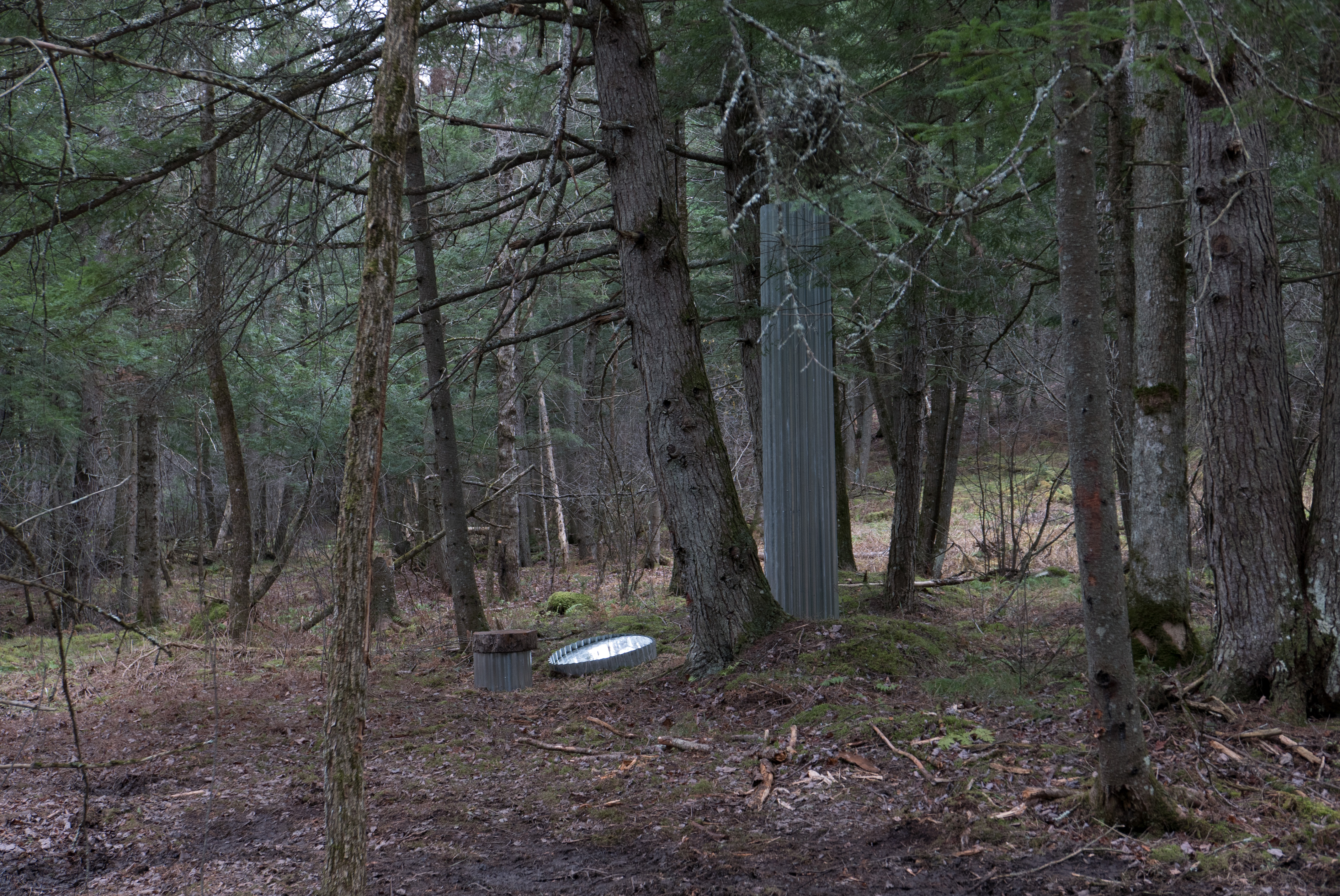 This may not be the final location for the oracle mirror but I like the implications of ending Mythos with self-examination, however interpreted.

Taking the place of the mirror and column at the beginning of Mythos is a rock shaped like an arrowhead pointing upwards. I’m not sure why this feels so appropriate — perhaps it is simply the beauty of the rock itself, and how perfectly it is positioned, at the start of a natural procession of trees that leads into the distance, an unplanted counterpart to the planted rows of crabapple trees that form La Grande Allée. 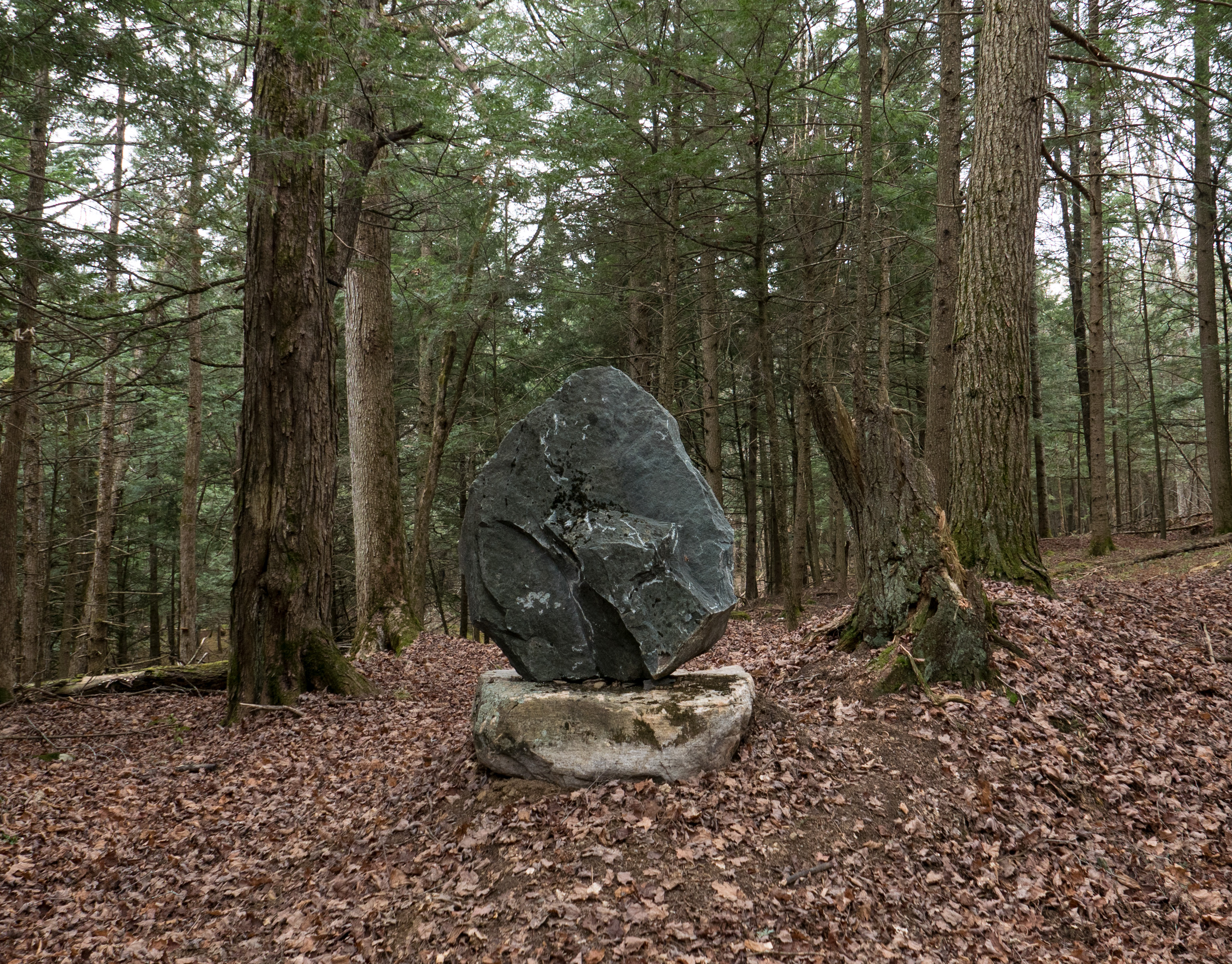 Talk about serendipity! What looks like a base for a sculpture was a rock we found in that exact spot.

It’s possible that I would have developed Mythos without the helpful critique that the observant visitor made. It’s equally possibly that I wouldn’t. I accepted the criticism in the spirit it was given; I took it to heart because it came from an educated and experienced individual whose judgement I trusted. I thank him. Timelines is better for it.

Such wonderful photographs — thanks, Patterson. And reflecting on comments, too — that’s not a bad thing. Other perspectives certainly bring new voice to ours.

Thanks, Lisa. Yes, other perspectives can make us think harder.

In the beginning of my 30-year journey as a corporate and marketing writer, I used to bristle at copy changes by clients. But my work life and blood pressure improved once I developed some Zen about it. I listened, and often either made the changes or swayed my client in my direction. It made for both better copy and better client relations. Also, it kept me sane. I love the changes you’ve made, respect your process, and dream of one day seeing your garden for myself.

Better blood pressure: a good idea for all of us. Helen, I really look forward to the day you (and Sarah and ???) come for a visit.

Hi Pat, I really like your photo reflected in the mirror. The sky, the grass, the leaves and your presence outlined by the sun on your silhouette. The soul of your garden, revealed. Thank you for sharing your discoveries. (and thanks to the automatic translator)

So good to hear from you, Françoise. It’s interesting that you responded to that photo as you did. I hesitated to use it — the mirror was so dirty!