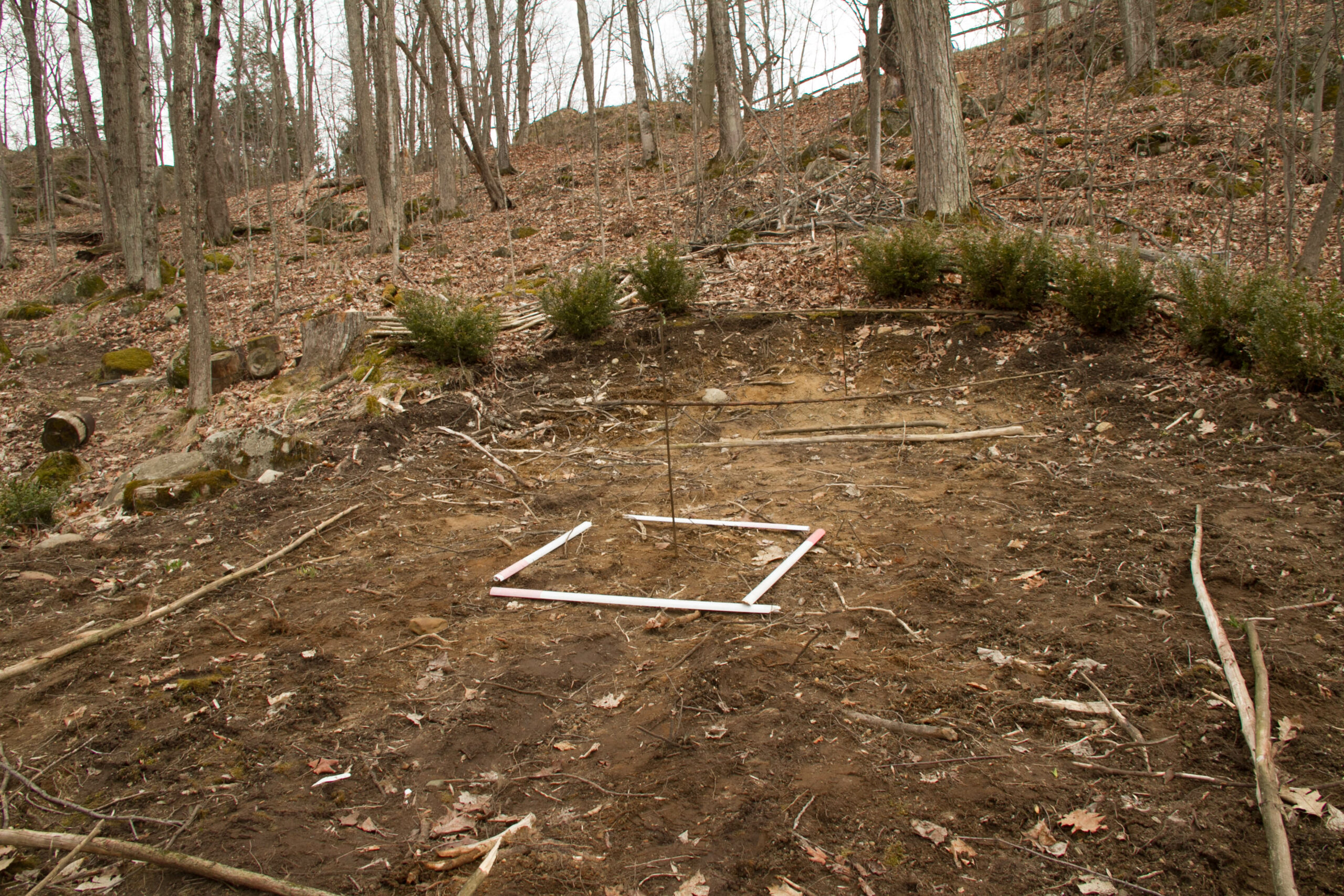 The Upper Room is the memorial I created to remember and honour my mother. Designed to reflect the things most important to her — her family, her religious beliefs and her dedication to Virginia and its institutions —  the Upper Room is a small formal area set amidst a natural forest on a hillside above our house. I wrote about its creation in a post you can find here, gave an update on the project here and showed how it looked in winter in a post here.

Although my mother died in 2010, it wasn’t until 2016 that I began to focus seriously on the Upper Room. Over several years, an area that had been The Egg went from this  …

The highlight was, and is, the beautiful etched glass screen, featuring the bare branches of a dogwood, the Virginia state flower, designed by Montreal artist and friend, Mary Martha Guy. Behind the pew-like benches and in the woods outside the Upper Room I planted Christmas ferns (Polystichum acrostichoides), bleeding heart (Dicentra spectabilis) and small round boxwood (Buxus ‘Green Velvet’).

A concern from the outset was what to plant in the corners of the middle level where the benches sit. I considered various options and settled on using some type of evergreen. Hicks yews (Taxus x media ‘Hicksii’) seemed perfect. Their rich green needles could tolerate the shady conditions and the traditional connection between yews and churchyards reinforced the religious connotations suggested by the name of the area. Unfortunately, despite the fence we erected around the Upper Room, over their first winter deer stripped the yew trees bare.

We repaired the fence and planted yews again, smaller ones this time that we protected over the winter with burlap, making them into little monk-like figures.

Unfortunately, that didn’t work either. By late spring this year, it was obvious that the shrubs would not recover.

Two strikes and the yews were out. But what to plant instead? When I first began thinking about that more than four years ago, I considered using limbless tree trunks. To me they brought to mind columns inside a church, another religious connotation I liked. When I tried one though, I found the effect less than pleasing.

In spring this year, no other idea having occurred to me, I decided to try tree trunks again.

Cedar tree trunks are easily stripped of their bark at this time of year. The trees we found in the woods were straight. And tall.  And now those tree trunks are in place.

I need time to become adjusted to this new element. The columns may be too white, too powerful, too tall. But I know that deer will not touch them and they won’t need to be protected from the cold.

So for now at least, I am content. More than that, I think my mother would be pleased to be remembered in this way.

I think your Mother would be very pleased. This room is a favorite of mine and I like the posts- at least in the picture.

I remember your visit with a lot of pleasure, Kathy. I hope you and Lynn will someday be able to come again.

A lovely tribute to your mother, Patterson. I love the glass panels — not sure about the white trunks, but they may weather in quite nicely. And a good thing that they won’t be bothered by the deer.

Thanks, Lisa. The photo emphasizes their whiteness which may, as you say, weather in. But I like Kathy Purdy’s comment above.

The posts make it more church or cathedral like to me, but maybe not white. What color would evoke marble or some other material that would be in a venerable religious building?

Wish I’d thought of that, Kathy! A really good idea that I will ponder on.

Glad I could help. Seems like many commenters had similar thoughts. Letting the white weather will help. Wonder how it would be with moss growing on it?

I doubt moss would grow on the vertical surface now that it has been painted. Not sure I’d like it mossy even if it did.

This is so beautiful.

Thank you, Phillip. the space is very peaceful.

Flipping yews! A familiar sight, those bronze trees..The white is a little stark. I’m wondering about them decorated in some way, perhaps as church columns are or with additional meaning, words or images?

I think you’re right but I’m going to let the columns weather before doing anything to modify their colour.

Gives you time to think, too..

The trunks are great, majestic even. But I agree with others that the white is jolting. Easy enough to alter, I imagine. This space is beautiful.

The etched glass is lovely, and I like the cedar trunks painted white. I don’t think it is too stark. Somber, perhaps, but not inappropriately.

The cedar columns are the right scale and material. But churches and cathedrals although somber have flashes of colour from the stained glass. You could consider a more playful or even provocative choice for the columns. What was your mothers favourite colour? Or what would be a counterpoint to the leafy ceiling and dogwood silhouette? The advantage of the static columns is that the colour can change.