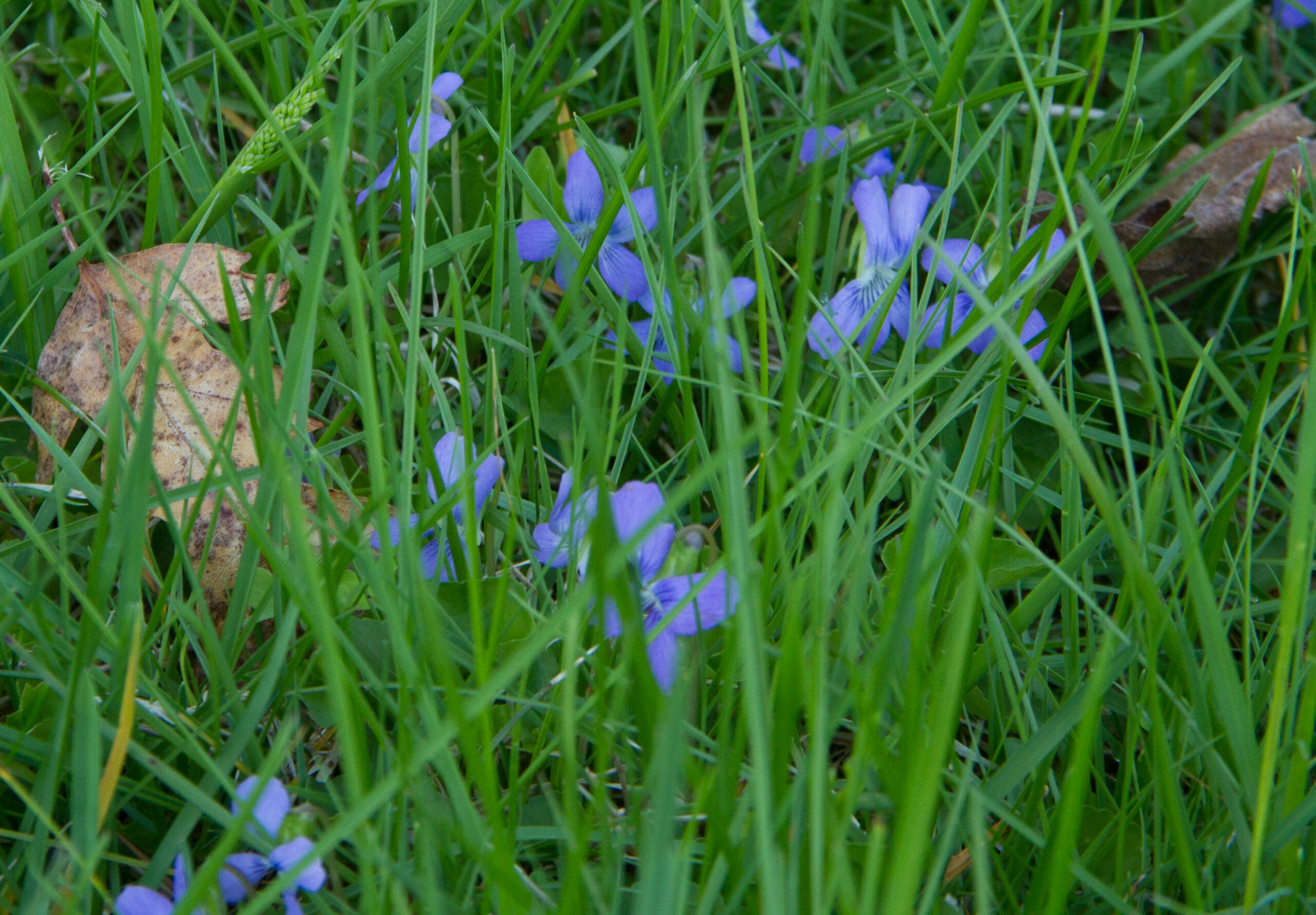 In 2016, in order to discourage Canada geese from ‘littering’ the  lawn, we began to transform it into a meadow. We didn’t follow the advice given by experts on how to create a meadow — their process involved too much work and too much expense. Instead we simply stopped cutting the grass. We let it grow throughout the season and cut it only once in the fall, to mulch the leaves and to cut down any trees that were taking root.

Now, entering the third year of this experiment, it is fascinating to see what is appearing. From a distance, the open area looks like an ordinary lawn spotted with large patches of blue and white. Most noticeable are the patches of blue, thanks to the wild violets that are growing everywhere. 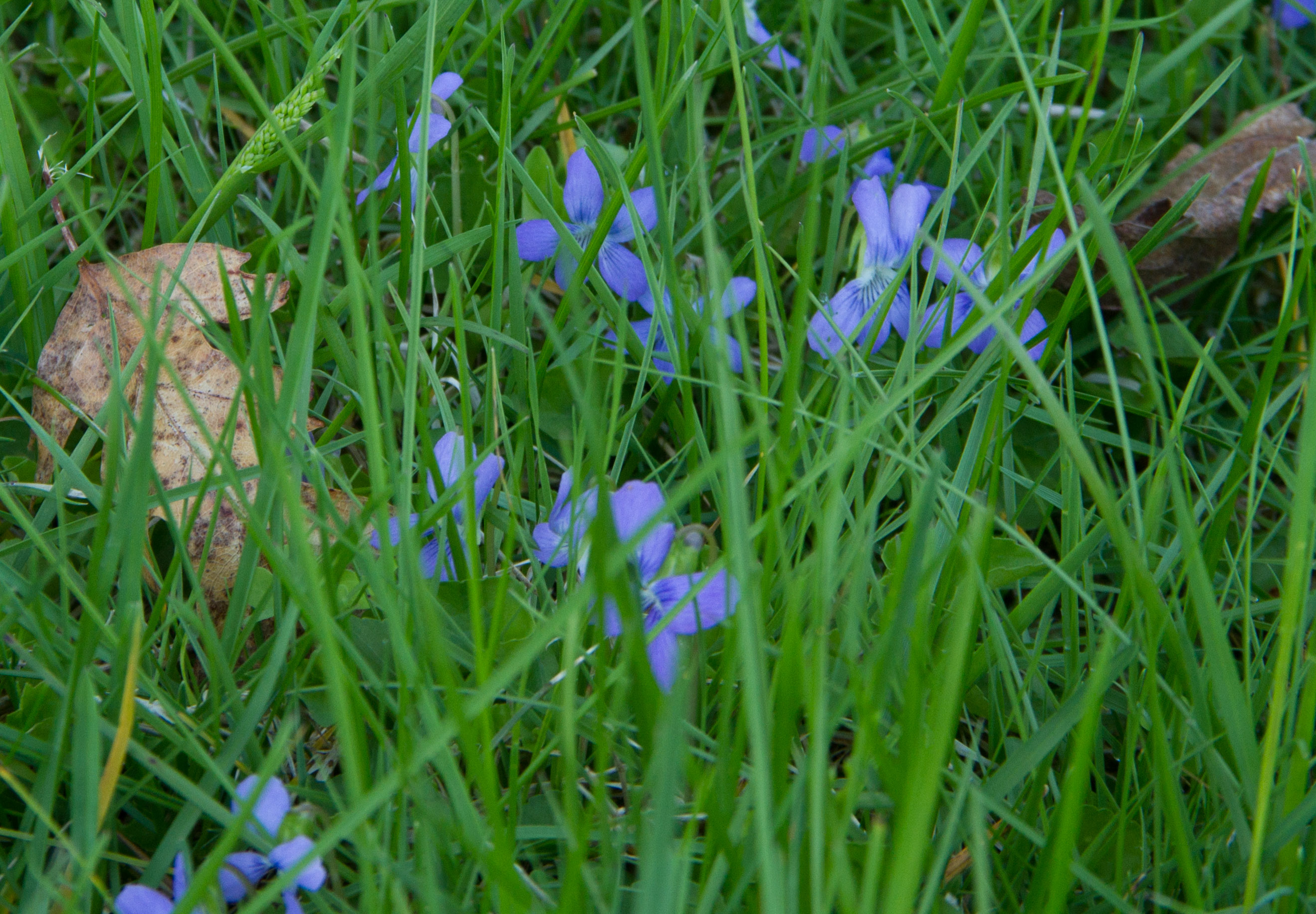 The white patches are wild strawberries, and I’m hoping their fruit will be edible, even if small and rather seedy.

Other white patches are thanks to the plant (Cardamine pratensis) shown below. It goes by various common names —  lady’s smock and milkmaids are two, and presumably refer to the colour of the flower. It is also called mayflower because that’s when it blooms.

There is some interesting folklore associated with this flower that I plan to write about soon.

There are dots of yellow in the meadow and spots of green brighter than the lawn, coming from ‘weeds’ like dandelions and creeping Charlie. These would make pristine lawn lovers throw their hands up in horror but I rather like them both.

Patches of russet brown come from the maple seedlings that have appeared in great numbers.

It seems that this is a ‘mast’ year for maple trees. I’m not the only one who has noticed how many more seedlings there are than normal.

Up close, it is easy to see the russet coloration of the new leaves.

Rising above the grass are the leaves of lupins. We will let them go to seed, and if they like the area, they will spread happily in years to come.

But of all the colours,  blue predominates. The biggest patch of blue is under the linden tree.

We’ve been planting muscari, or grape hyacinth bulbs, for the last few years and finally they are having the impact I wanted.

I like the occasional dandelion. Mixed in with the dark blue muscari, they shine in contrast.

Week by week and month by month, the meadow will change. The muscari and the spring wildflowers will fade; the various grasses that made up the lawn will grow taller.  There will be surprises — or so I hope.

And with luck, the Canada geese will leave us alone.

I love that deep blue together with the yellow! Gorgeous!

I didn’t look it up so you are probably right. Whatever it is, I like it!

Everybody is an expert……like the surprise!

I am following your meadow with interest as I have one on a much smaller scale, and I think mine is damper. I have been scattering lupine seeds from the garden lupines but have yet to see one seedling. But I have golden alexander and it looks like the camassia I planted last fall will be blooming soon.

We have blooming nearby so I wasn’t surprised to see a small patch on the lawn/meadow. I also have scattered seeds and had no luck. What are we doing wrong?

My fingers are crossed that the camassia I planted last fall made it through the winter. I have yet to see any sign of the bulbs. Gr-r-r.

I may have an answer to the lupine seed dilemma. Years ago, I had a similar problem. I’d carefully collect the seeds in the fall, store them over the winter months and then scatter them in the spring. Nothing happened. A local old timer informed me that lupine seeds must endure a long, freezing cold winter in order for them to be able to germinate in the spring. So I left them in an unheated shed (safe from mice) for the duration of the winter and scattered them in the spring. It worked. For those gardeners living in a climates with winters milder than in Quebec, perhaps storing those seeds in your freezer for 5 or 6 months would work ?

Wonderful, especially all those Grape Hyacinths. Creeping Charlie drives me to distraction, but in a big wildish meadlow I imagine it would not be much of a problem.

I’m thinking of planting some orange tulips in with the grape hyacinth… should be spectacular, assuming the squirrels cooperate.

I love the blue and yellow touches!