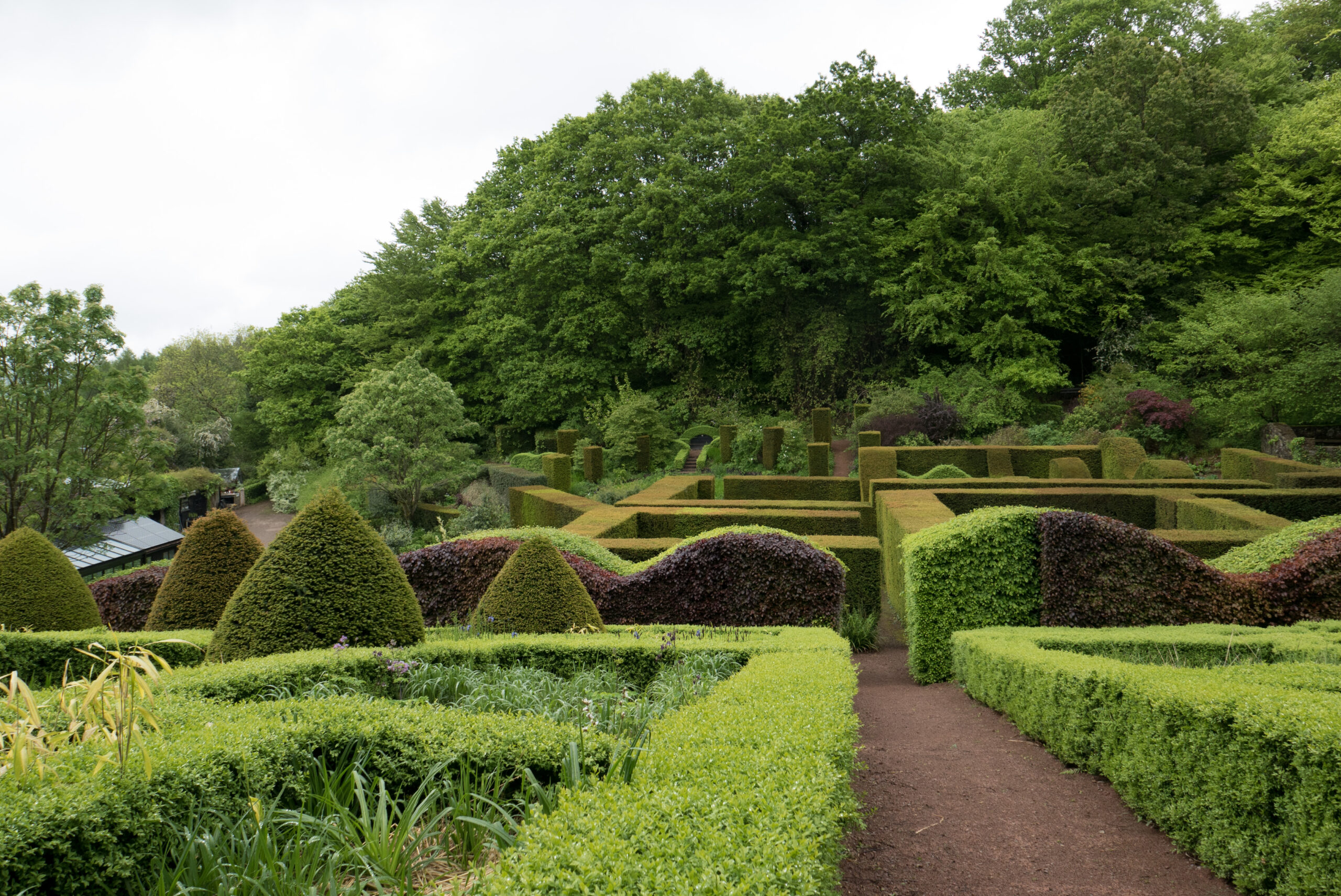 Why do some gardens appeal to us while others leave us cold or indifferent? Is it something in us, in the garden, or in the interaction between the two?

Veddw is a garden in Wales, created over the last 33 years by Anne Wareham and Charles Hawes. It is a garden that touches me deeply, and I’ve spent many hours examining my memory and the photos I’ve taken there trying to understand why. I know that the connection between the site and its history is one reason. Acknowledging and highlighting that type of connection shapes the garden at Glen Villa, so it is possible that ‘like likes like’ is the only reason. But I know there is more.

Veddw has an extraordinarily strong sense of place. It’s memorable. It’s a garden that engages visitors and prompts strong reactions, whether positive or negative. It is distinctive, with designs, plants and structures that differentiate it from other good gardens created in recent years.  But still there is more.

I’m particularly attracted by the sinuous hedges that wow you when you first enter the garden. Thank goodness there is a bench where I could sit comfortably and take the time I needed to grasp the complexity of the arrangement before me. 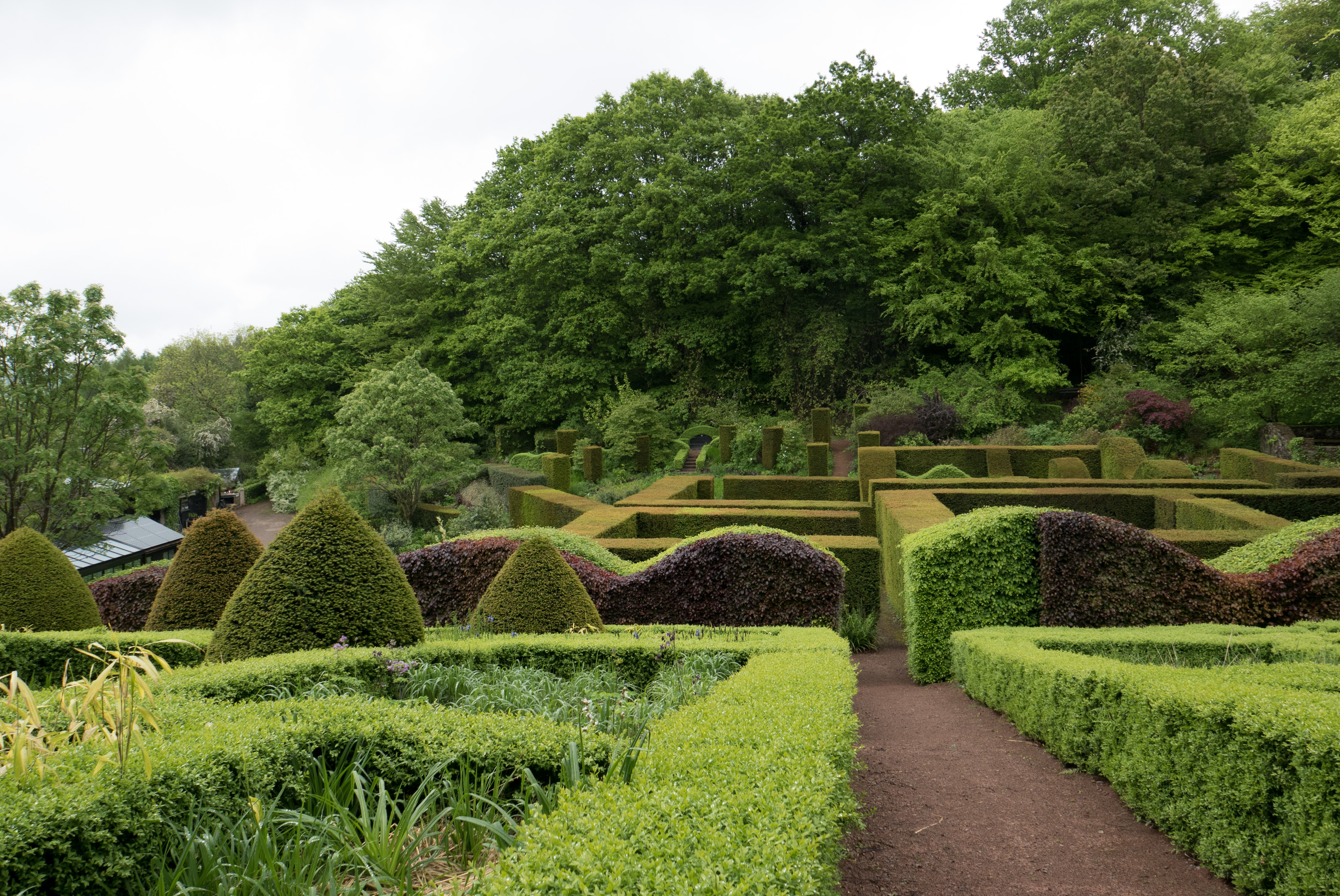 Talk about theme and variation! This outlook shows that in spades.

I’ve used this image from the entry to Veddw many times in a talk I give called Learning to Look: the Art of Garden Observation. For me, it illustrates how important it is to give yourself time to appreciate what is in front of you. Only by doing that and then, later, by spending time looking at the photograph, did I discover the complexities of the design, how the theme ‘hedge’ is introduced and varied: scalloped-topped hedges backed by square-topped hedges, cones in the foreground echoed by square columns in the distance, arches echoing scallops, and all enlivened by shades of green varied with touches of maroon and rust.

In 2017, after an extended visit, I wrote that Veddw is “a garden of a different sort”. What did I mean by those words. Original? Unconventional? Bold? Veddw is all of these, and more.

While the atmosphere of the garden varies considerably from one section to the next, there is a unity of purpose, an authenticity and a feeling of integrity that holds the disparate parts together. The garden is unconventional, to be sure, and in this way it reflects its creators, a couple who left jobs and a secure life in the city to make a garden for themselves. But while it is unconventional, it doesn’t reject convention entirely. Instead at Veddw, familiar ideas receive a distinctive twist.

Take garden rooms, for example. They are a commonplace in many English gardens and at Veddw there are garden rooms aplenty. Those on the hillside are outlined and separated by hedges, but each room appears to be a different size or shape, and different plants give each one its own  character. 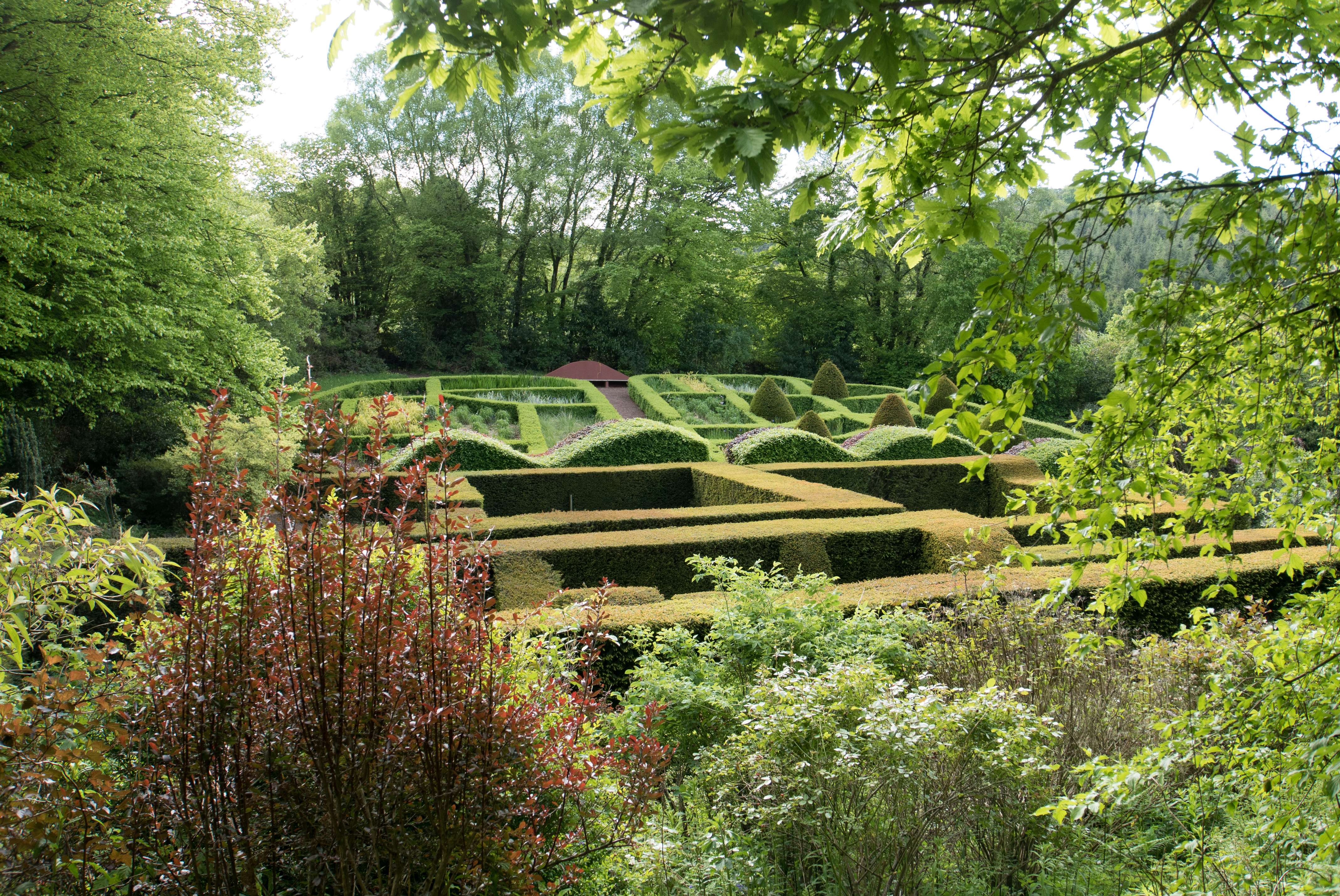 Close to the house a garden room is divided in four squares centred on a handsome dish filled with water that sits on an equally handsome squared-off pedestal. But instead of one room, are there four, each delineated with a ‘wall’ of rails painted black? 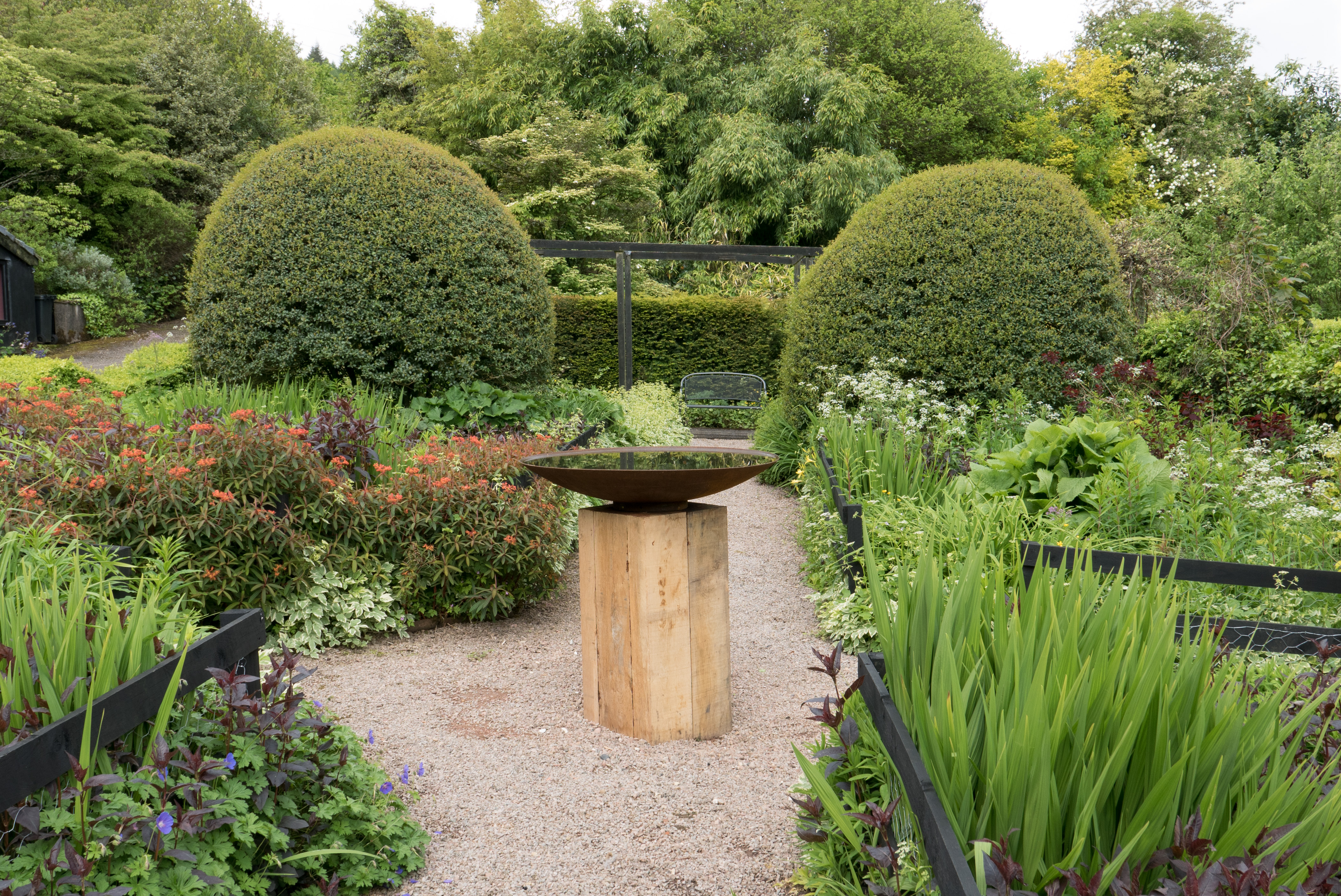 Garden allées are another common garden feature and at Veddw there are several. One allée is defined by high hedges that create a narrow, almost claustrophobic, path.

A white bird acts as the obligatory focal point for this allée. The bird features prominently in other areas in the garden as well.

Another is open-sided, with a mown path flanked by mirrored globes. The posts, squared and angled like the post that holds the dish of water, are arranged in pairs but the pairs don’t match. Instead they vary in height, not getting shorter in a predictable way to make the distance seem longer, but ordered randomly, encouraging the eye to skip down the path.

This photograph was taken by Charles Hawes and is used with his permission.

Veddw is full of contradictions. It is open to its surroundings and closed off from them. On my last visit, I felt immersed in the dense plantings.  While occasionally I caught a glimpse of the surrounding countryside, more often my view was limited by a hedge or a fence … 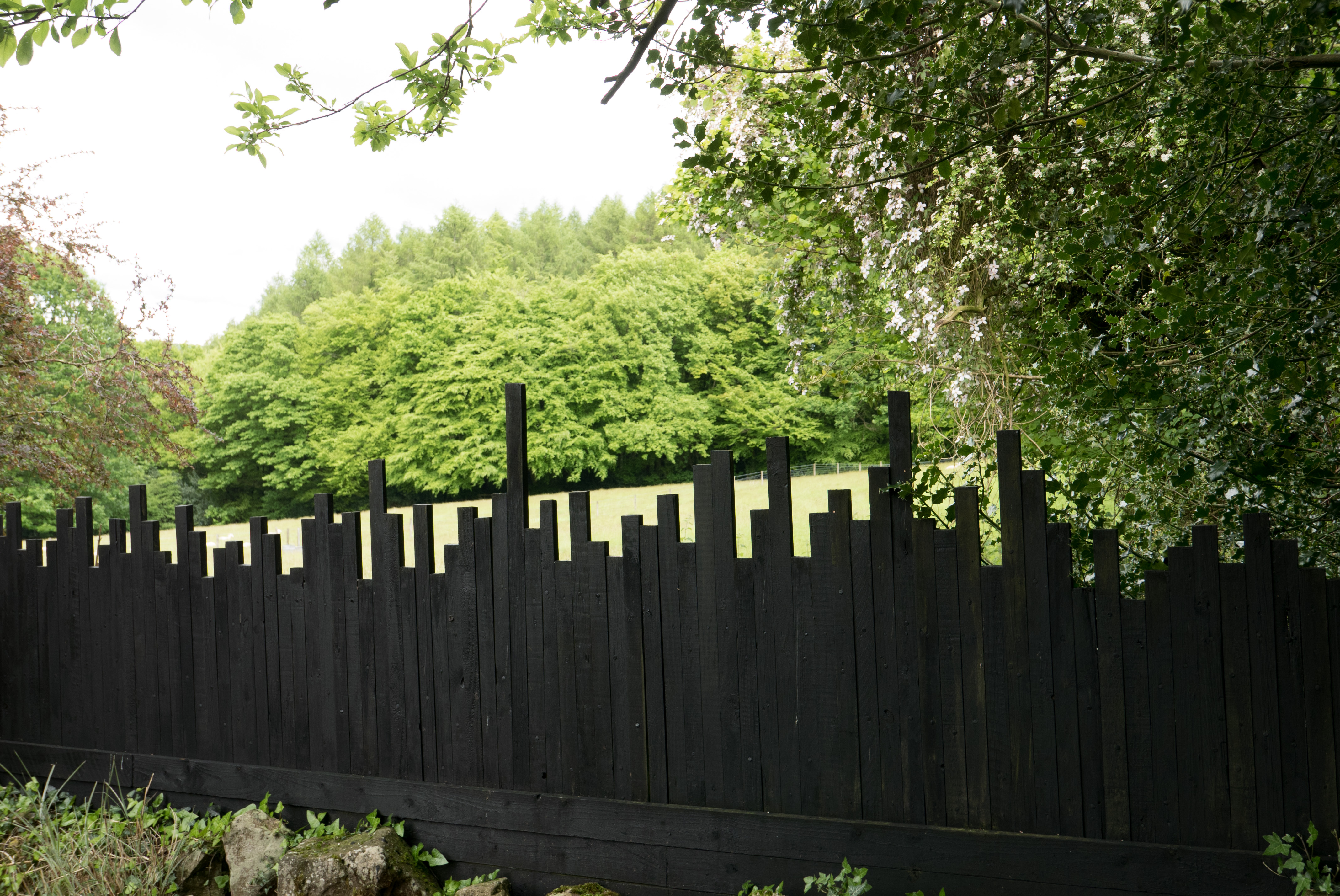 I like this simple fence. It’s made of inexpensive materials, yet looks sculptural, almost like a city skyline or a range of rolling hills.

… or an exuberance of plants. 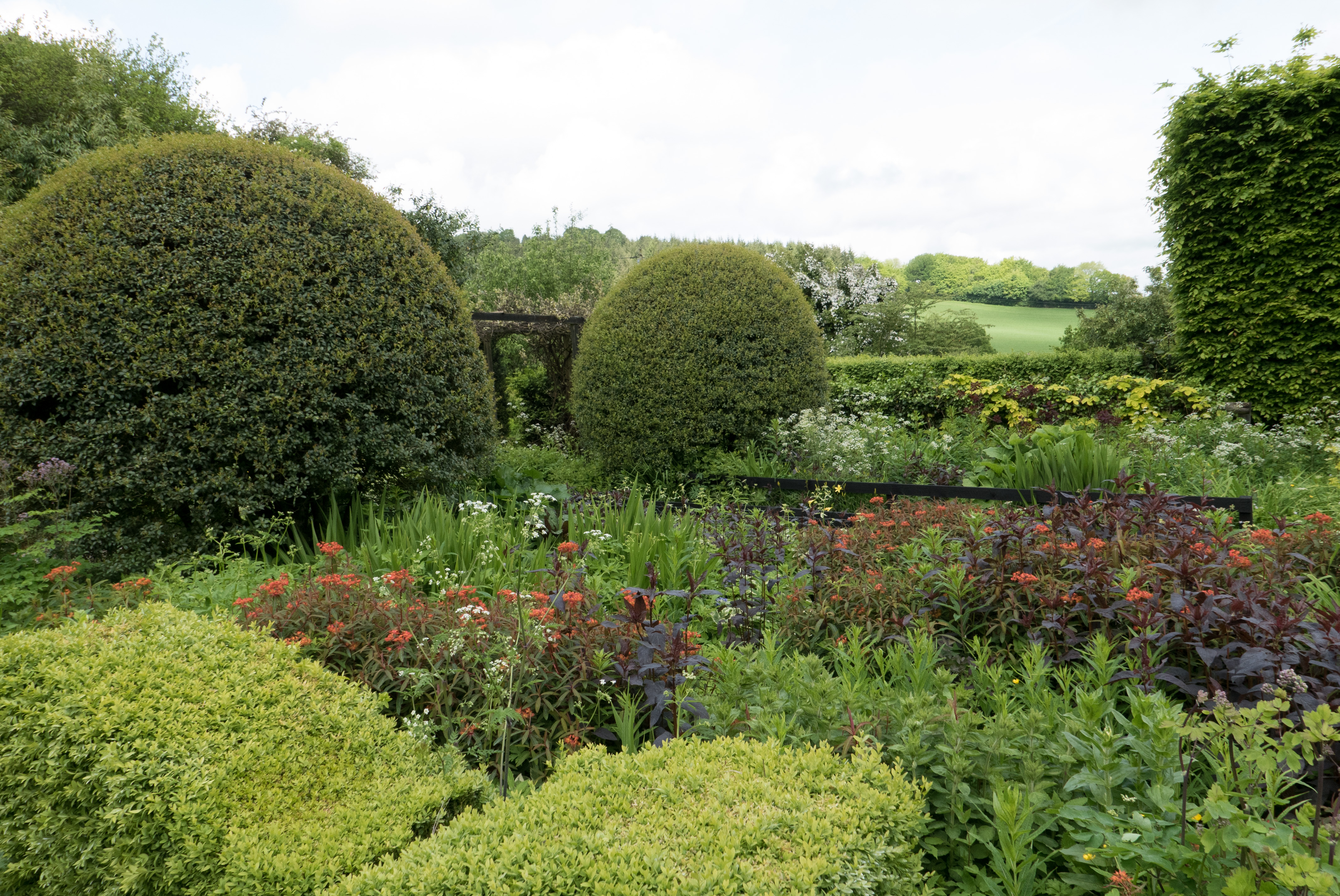 Do the fields in the distance count as borrowed view?  They can easily be seen as part of the garden.

When a paths that wanders through the maze of hedges appears to be blocked, words appear, offering a way out through a door in the mind. 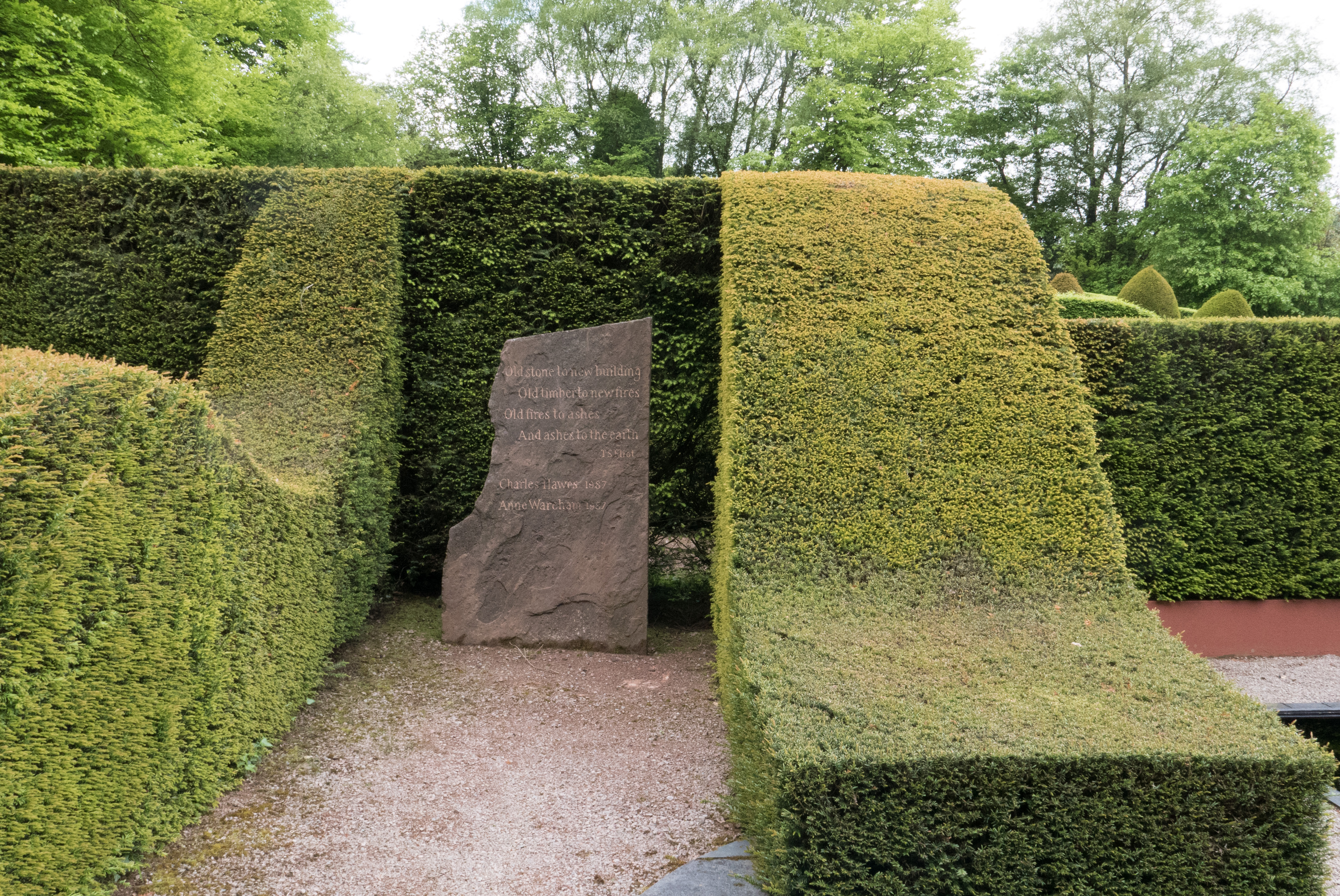 Cut into the stone are words from T. S. Eliot’s ‘Four Quartets.’

Unlike more conventional gardens where words are rarely used, words at Veddw are scattered throughout, and their presence invites other times and places to enter. Words on the bench at the entry offer different spellings of the garden’s name, making the past they bring to mind a part of the present. 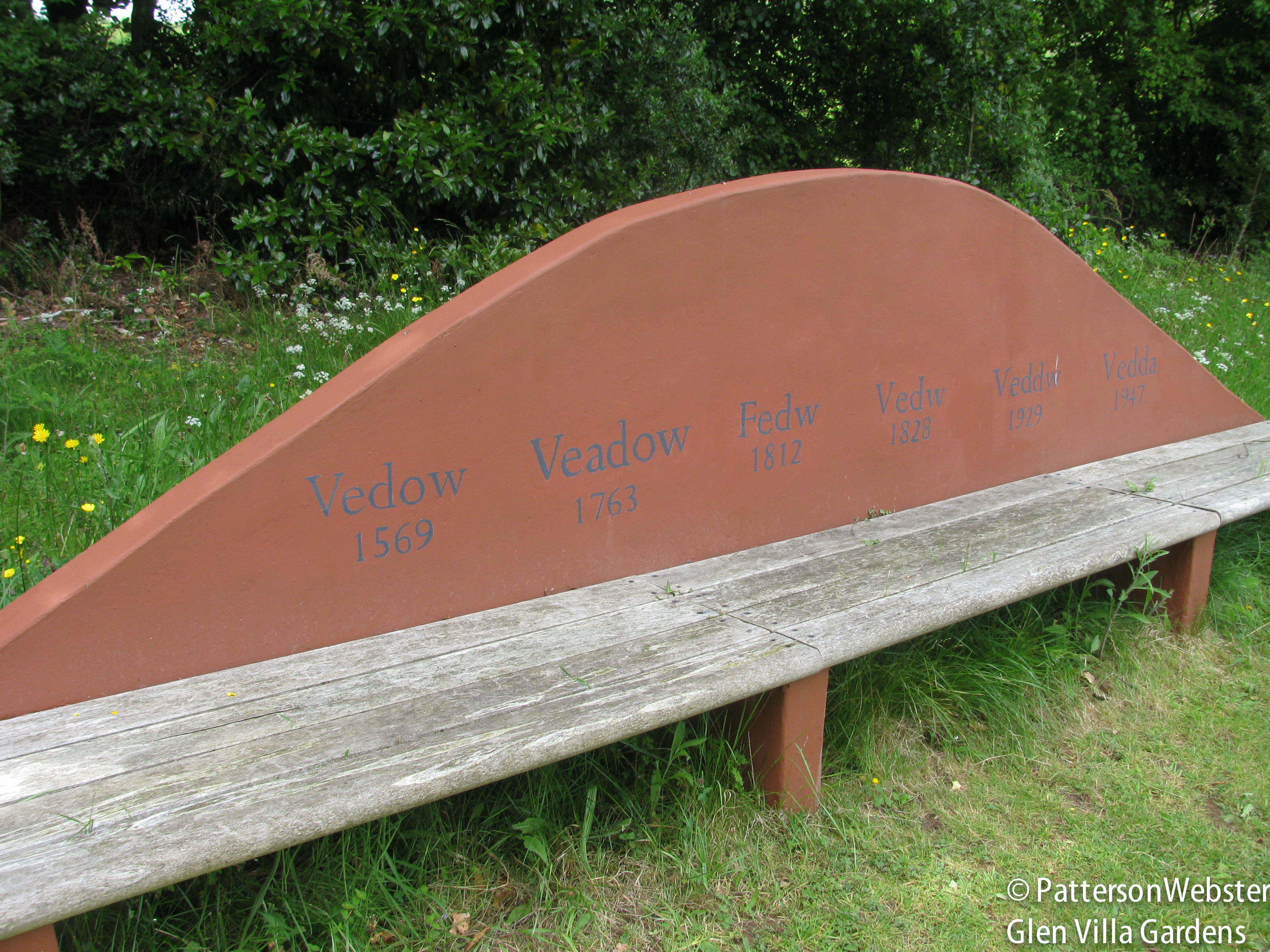 The (grave)stones almost buried under perennial blooms do the same. 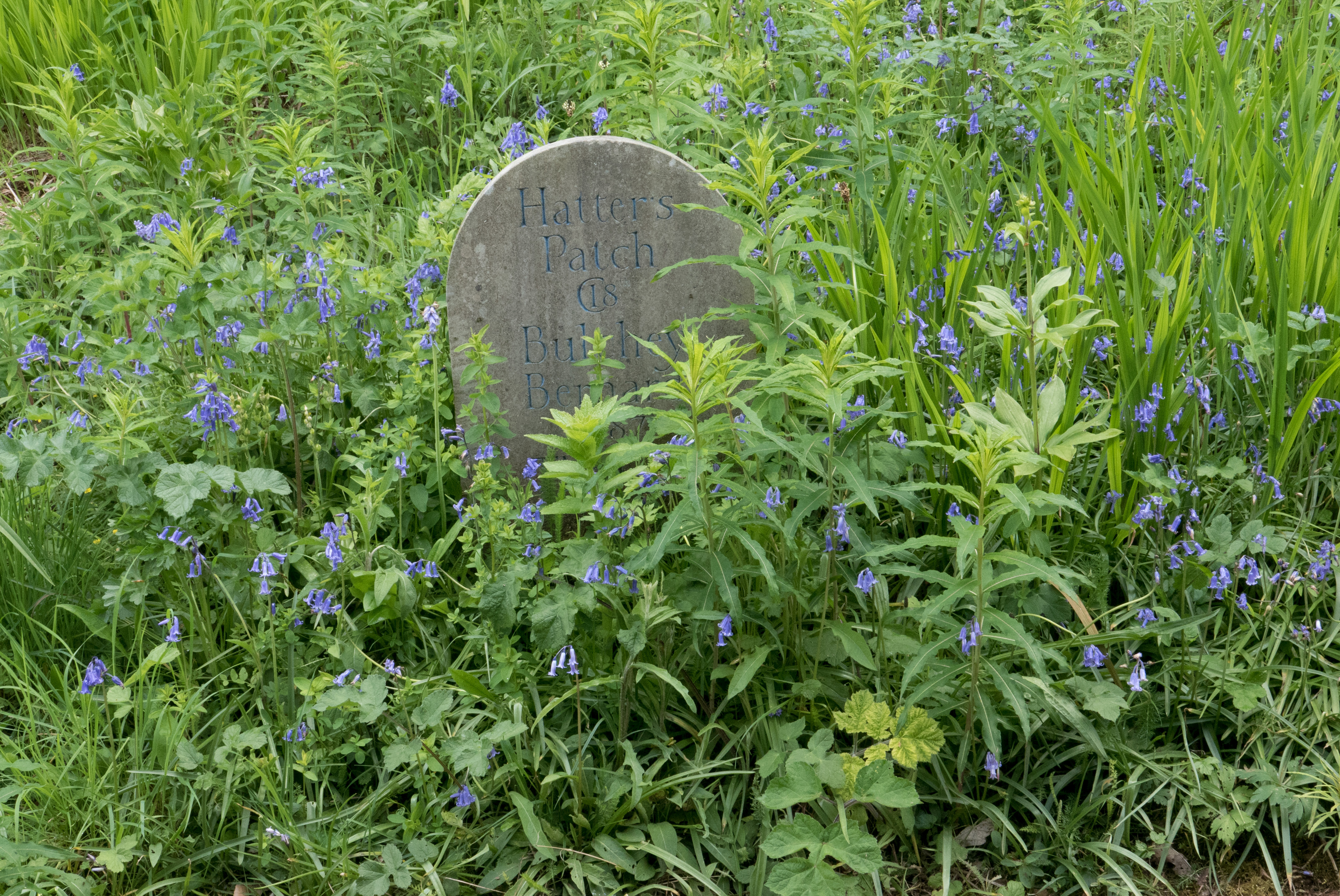 Tintern Abbey is close to Veddw and a bench at the edge of the woods quotes lines from Wordsworth’s poem, Lines Composed a Few Miles Above Tintern Abbey. 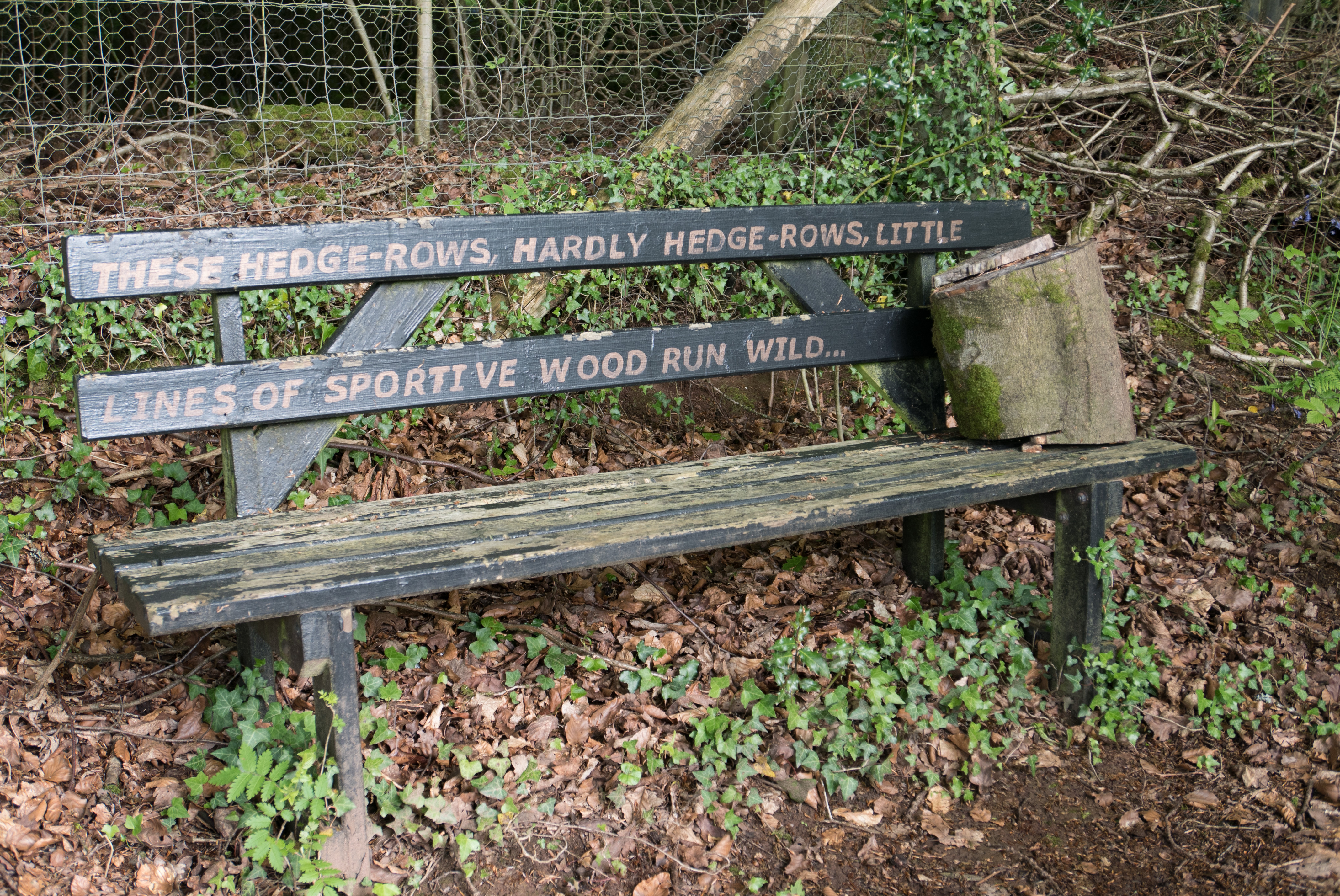 “Sportive wood run wild:” this could almost describe Veddw itself. It teeters on the edge of wildness, not at all like the well-mannered gardens of England’s Home Counties. Veddw feels closer to anarchy, or to a chaos barely contained. For me, this is one of its pleasures: to see the beauty in an untidy nature.

Wordsworth wrote that the “wild secluded scene” around Tintern Abbey led to “thoughts of more deep seclusion” that “connect the landscape with the quiet of the sky.”

This is what the reflecting pools at Veddw do — they pull the sky down to the ground. 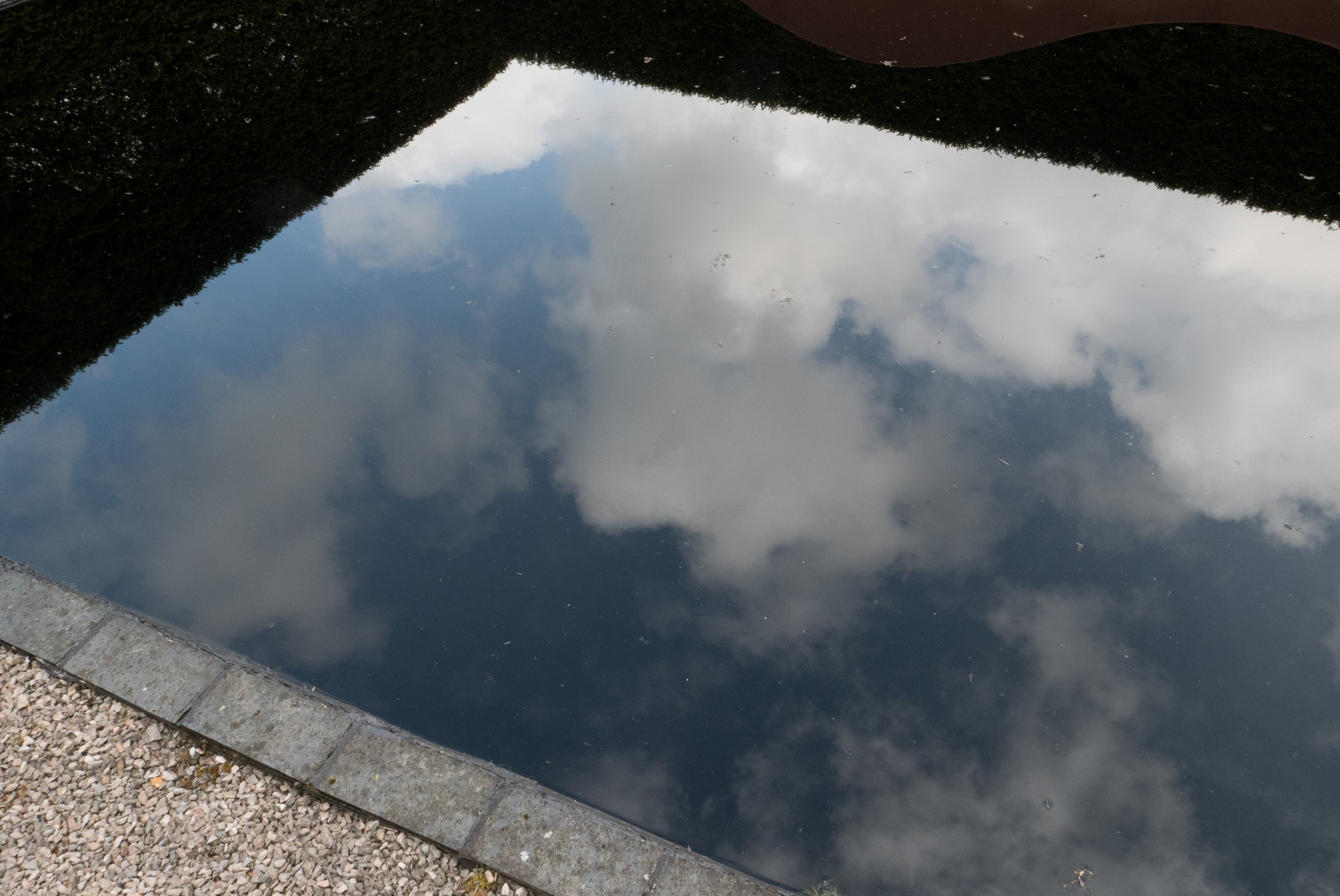 One of the pools seems to pull the sky down even farther, drowning it under the water to create an intriguing sense of mystery. 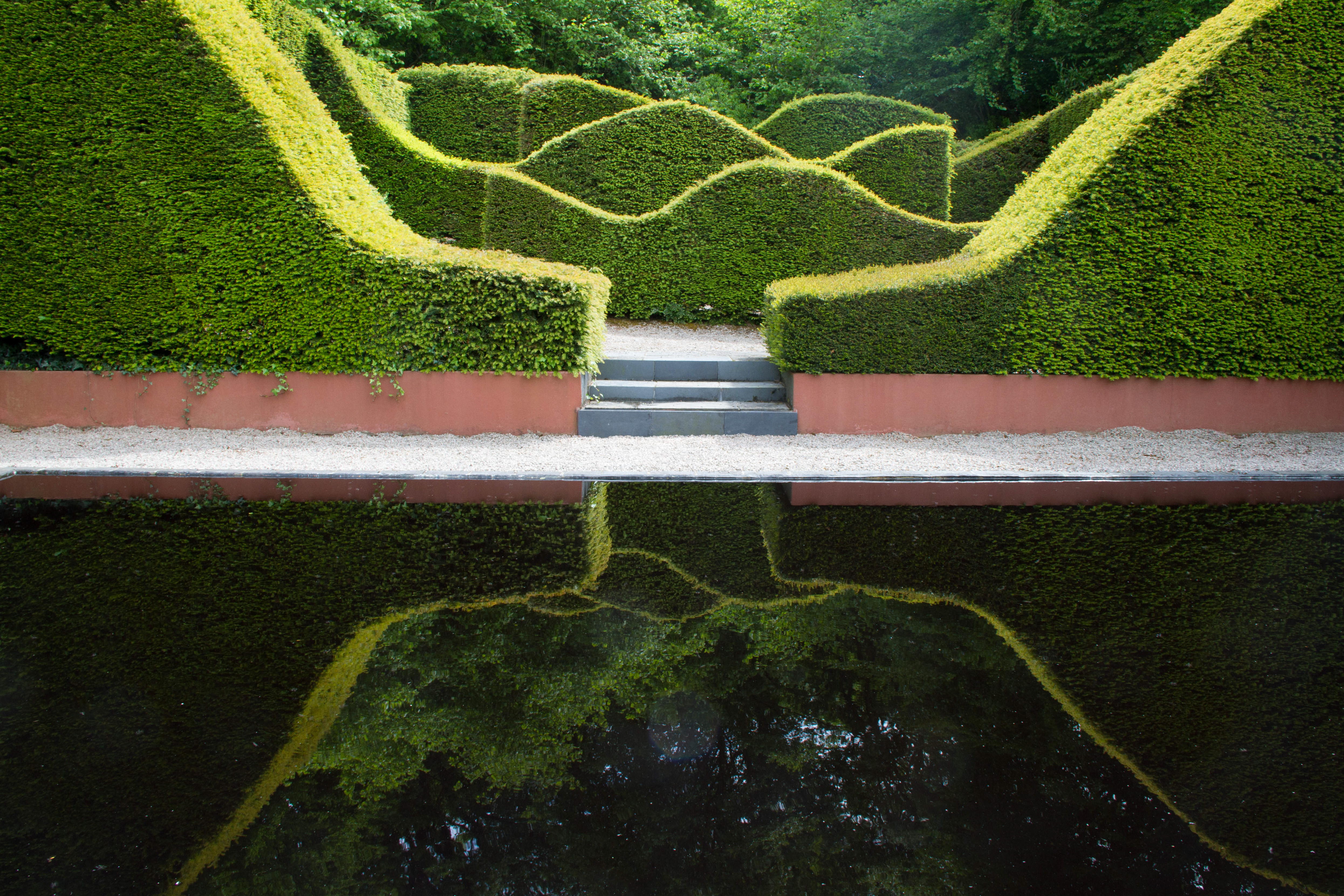 That sense of exploring the unknown permeates Veddw. Unlike the many English gardens centered around aesthetics, Veddw centres itself on ideas. It is set off from the world, yet connected to it through allusions that extend its boundaries to the worlds of literature and art. It’s a garden that knows who it is and what it wants to be: a work of art that goes beyond what can be seen, touched, smelled or heard.

No wonder that it’s one of my favourites.