Memorials, Memory Posts and Columns: Commemorating the Past at Glen Villa 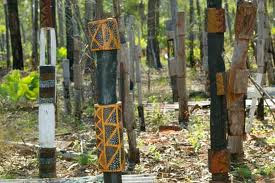 What makes a good memorial? This question continues to occupy my mind, and not only because of the memorials I saw recently in Washington, D.C. and wrote about here.
For more than two years I’ve been thinking about a creating a memorial to my mother who died in 2010 at the age of 97, after a full and estimable life.
Already in the woods at Glen Villa now are memorials to other family members. I call these memorials memory posts, and for me they commemorate the lives of people who were important in my own life: my father, my brother-in-law and my sister-in-law.
I have a son who lives in Australia, and visiting him and his Australian family, I learned that some indigenous people there carve and paint tree trunks as a way to remember the dead. I saw a hall full of these pukumani poles at the National Gallery of Australia in Canberra, and was deeply touched by the emotional power they conveyed.

Returning from Australia, I decided to make my own versions. My father’s and my brother-in-law’s posts are made from the two halves of an enormous white pine tree that had fallen late in 2005, the year before both men died. They were good friends, and using the same tree united them in a way I think they would have enjoyed.

Finding the spot to place the poles was surprisingly easy. Some years earlier, when we were marking out a trail through the fern woods, I came across a boulder marked with a large A.  I routed the trail to pass alongside this natural curiosity. Initially I toyed with the idea of adding words to the woods around the rock, playing with the notion of an woodland alphabet. But the choice of words never came clear, so I did nothing, waiting for inspiration or a better idea.

Putting my father’s post beside the A rock seemed obvious, since he was there at my beginning. And since he and my brother-in-law were good friends, the second memory post went close by. Both posts are painted with symbols and designs that, for me, suggest stories from their lives.

My sister-in-law’s post is farther along the same path. It is quite different from the other two, since she was very different from the two men. Hers is made of cedar stripped of its bark, painted in her favourite colours of turquoise and orange-salmon, and then decorated with jewellery which she loved. Interspersed with the strings of beads are small mirrors. These are not a sign of vanity. Rather, they join a past memory and a present moment. Whoever stops to look at this memory post becomes part of it, and part of the world that surrounds it.

My post about monuments in Washington D.C. provoked a comment from a friend and blog reader who sent a reference to an article that appeared in Slate Magazine in 2005.  Written by Witold Rybczynski, the article starts by asking a simple question, which it then calls into question.

What makes a good memorial?  “Since memorials have only one function — to commemorate people or events for posterity — a simple answer might be, A good memorial is one that endures.”
In which case, the memory posts at Glen Villa are failures. Weather is taking its toll on all three. The bark on my father’s post is peeling off in chunks large and small. Ditto on my brother-in-law’s. Briefly I considered building a case to protect them, walling them off to prolong their lives. But I decided against it. Time is doing its job, turning wood back into soil. This natural process of disintegration appeals to me. It shows, literally, the passage of time, a concept that is integral to gardens and to my approach to the landscape.
The memory posts at Glen Villa are private, not public, memorials, and that has major implications. In creating them, I didn’t need to consult with the families of others. I didn’t have to take into account a diversity of points of view or even consider what message I wanted the posts to convey. They were, and are, markers of lives lived. Using Rybczynsky’s words, they function “as an intimate experience of loss.” So I believe they are good memorials after all.
And they aren’t the only ones at Glen Villa.
Another memorial, quite different in spirit and intent, is Webster’s Column.  This piece, made of granite, stainless steel and stacked newspapers held inside a glass column, memorializes the career of an individual who is still very much alive.
For fifty years my husband was a journalist, best known as a reporter, columnist and editor of The Globe and Mail and then as columnist and editor of the Montreal Gazette. His columns provoked praise and criticism, as good writing that takes strong positions on important issues should do. When he began to think about retiring, I began to think about how to recognize his accomplishments.
The combination of his many years as a columnist and the form of a column itself was irresistible. Columns, triumphal arches and steles are, as Rybczynsky points out, time-honoured markers of people and events. Webster’s Column gives the traditional form a modern, and very personal, application.
The column stands at the top of a rise, on a flat space midway up a steep hill. So you approach it either looking up (reverentially) or looking down (disdainfully) – two of the views often held of journalists and their trade.  Stacked inside glass panels are newspapers, folded as they are when they arrive at your front door. The edge of the photo that appears on the fold provides both repeat patterning and colour, enlivening what otherwise might appear too austere.
On four sides of the plinth are quotations about newspapers and journalists, chosen by my husband to lighten up a tribute that embarrassed him. I’m not sure which quotation is my favourite. Perhaps one from Dic Doyle, long-time editor of The Globe and Mail. “Don’t believe a god-damn thing.” Or maybe the one from British Prime Minister Benjamin Disraeli, tossed off to dismiss journalists in general: “Today they blacken your character, tomorrow they blacken your boots.”

The Dowager Empress of China also had something to say on the subject, as did Spiro Agnew, Honoré de Balzac and someone identified only as NW. The breadth of the quotations suggests the breadth of the mind, and of the career, of the person choosing them.
Webster’s column stands on a piece of local Stanstead granite, honed and engraved with place names from North and South America, Australia, Europe, Asia and Africa.  150 or more places from which my husband reported, and on which he opined.
“Contemporary memorials are bedeviled by the storytelling impulse,” says  Professor Rybczynsky. Perhaps. I would argue that people want stories. They need them, as a way to understand the past and the present.
At least, I do. I tell my stories in and through the landscape at Glen Villa, which makes it more than a pretty garden. It gives it meaning and significance.
The third anniversary of my mother’s death is approaching and I continue to struggle with how I want to mark her life. I want to tell a good story, and an honest one. I know I’ll build the memorial in the part of the garden I named The Egg. Like the naturally formed A that marks the location of my father’s memory post, The Egg is unquestionably the ideal spot for my mother’s. memorial It won’t be another memory post, it will be something different. Exactly what remains the question.
I know this. Taking the lead from  Professor Rybczynsky her memorial will not pontificate. It will be neither therapeutic nor didactic. It will simply bear witness.

I love your memory posts!

After my mother’s death at the age of 97 last summer, I planted ten rose bushes to honor her and my dad. I haven’t found a way yet to mark the planting – but that too will come.

It takes time to find the right way to mark someone’s life. I love the idea of roses. They look lovely, smell sweet and have thorns. They would certainly be an appropriate choice for my mother!