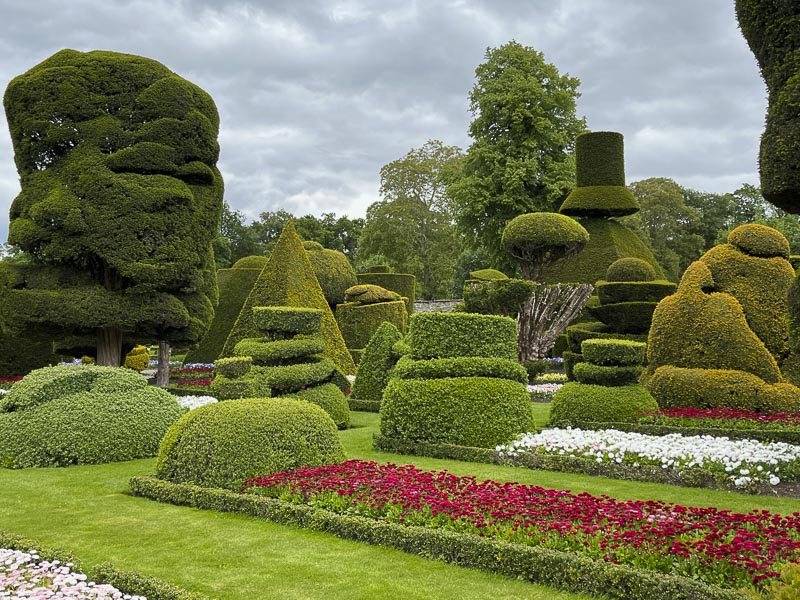 What a wonderful thing it is to fulfill a life-time ambition!

I’ve wanted to visit Levens Hall since the early 1960s. That summer, a young English girl arrived in Virginia to spend a year living with me and my family and, as a gift, she brought us a book about English gardens. On the cover was a photo of the garden at Levens Hall, in England’s Lake District. 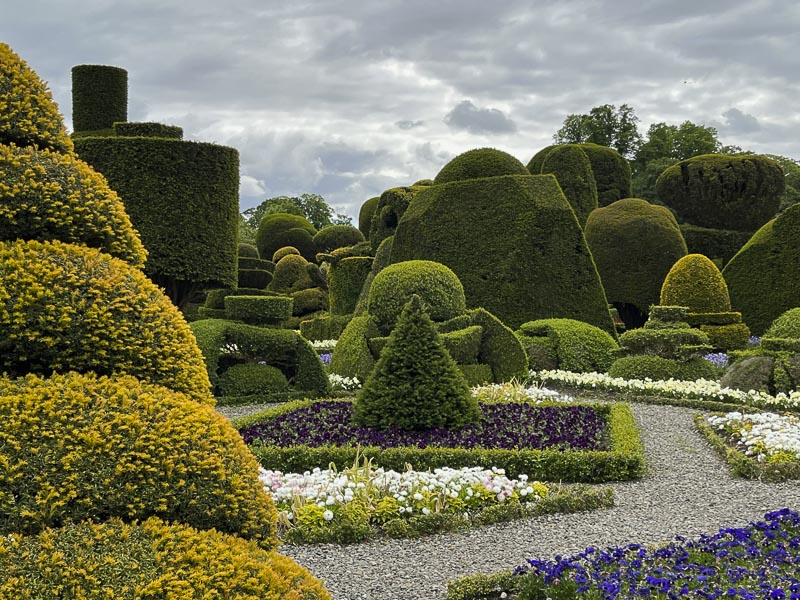 This is how the topiary garden at Levans Hall looked in May, 2022.

Was it then that my love for English gardens began? Maybe, maybe not. But what I know with certainty is that the cover photo captured my imagination and made me want to visit that particular garden and to see its weird and wonderfully shaped trees.

The idea of topiary was new to me then. It was intriguingly different from any garden I knew and at first I wasn’t sure how I should respond. I showed the photo to my older sister, seeking her opinion. She turned up her nose, saying that cutting trees like that was unnatural, that it distorted them and took away from their intrinsic beauty. Yet even she marvelled at the age of the trees themselves. 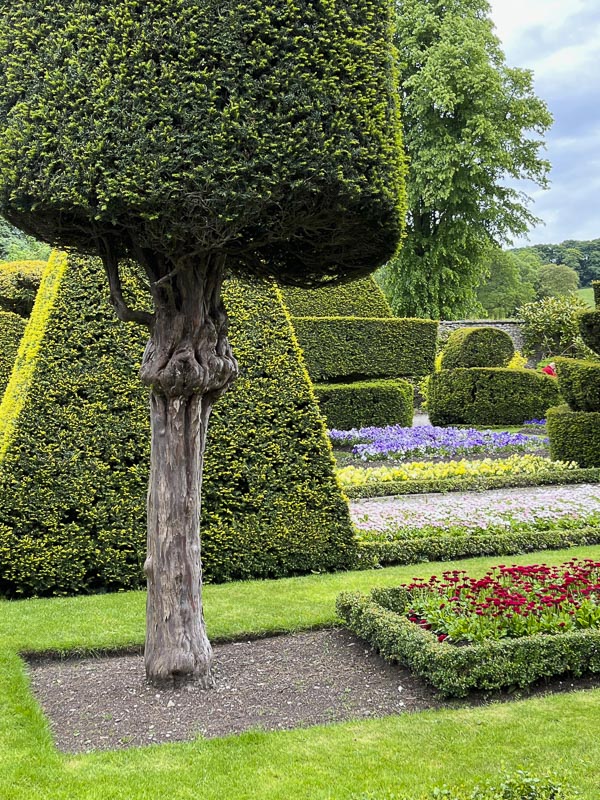 The knobbled trunk of this yew attests to its age.

The trees were old in 1960. Really old. They are even older now. More than three hundred years old.

Levens Hall is the world’s oldest surviving topiary garden, designed by Guillaume Beaumont in 1694. Amazingly, it retains many of its 17th century features. Yet as old as it is, the topiary remains as fresh and appealing as it must have been three centuries ago. 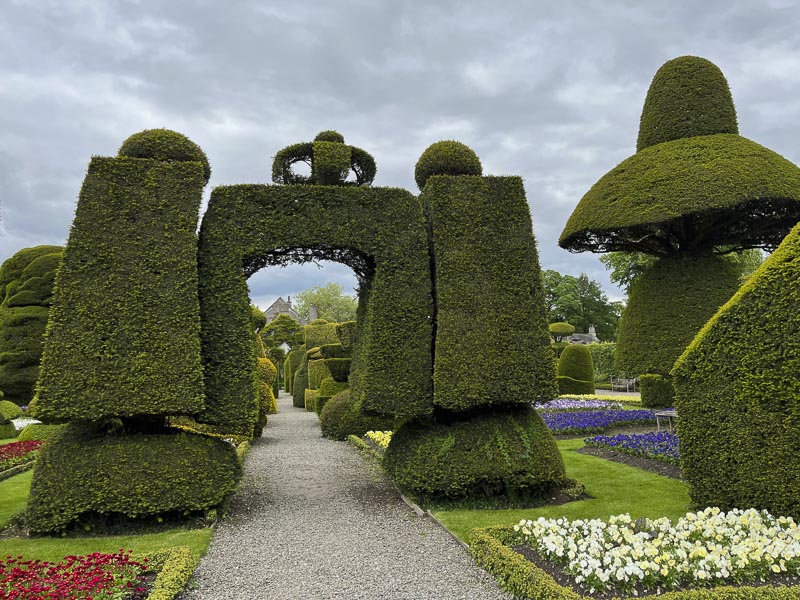 I don’t know how long the crown has topped this archway but it is particularly apt this year, when the Platinum Jubilee celebrates Queen Elizabeth’s 70-year reign.

Last week, when I finally visited Levens Hall for the first time, I was gobsmacked by what I saw. I laughed and smiled and laughed again, delighted with the humour of the garden and at how lighthearted it made me feel. The garden isn’t weighted down by history, it is lightened by it. One topiary immediately made me think of Alice in Wonderland’s Mad Hatter . 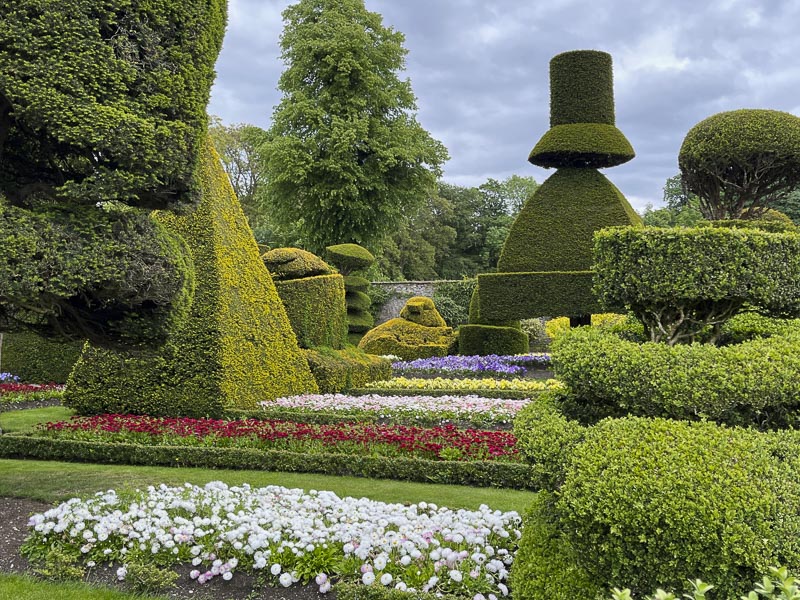 Another reminded me of a bake oven or the back end of a snail. 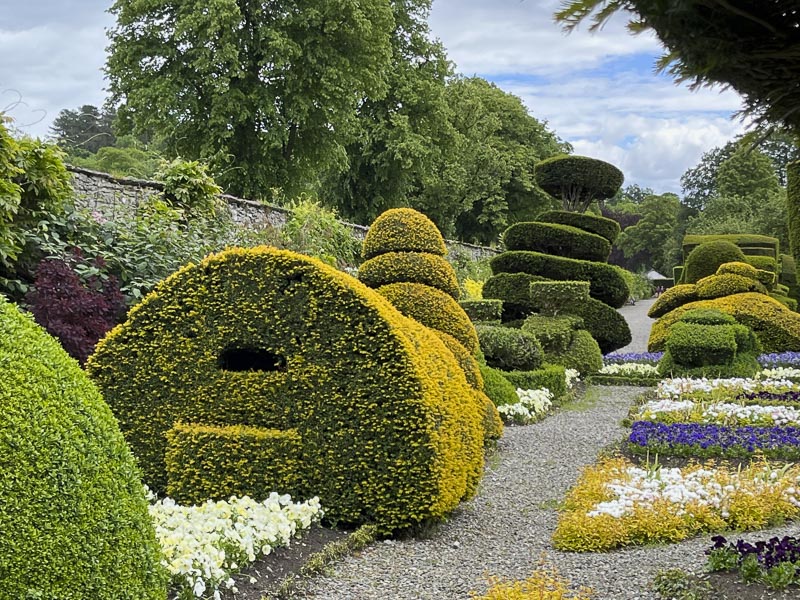 En masse, the topiary is a blank slate for the imagination, an assemblage of shapes that can make the mind wander to strange and marvellous realms. 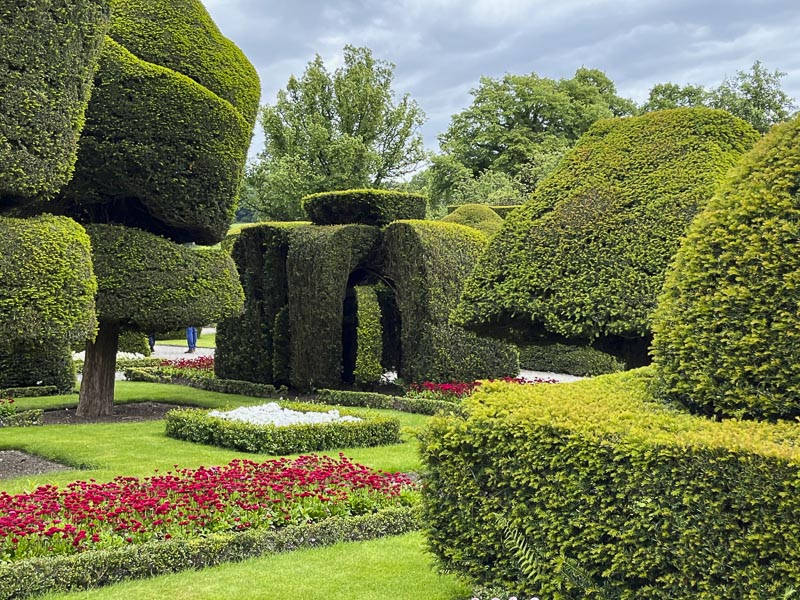 Normally I’m not a fan of single colour plantings like the ones you see above and in the preceding photos. But at Levens Hall, I think they work wonderfully well, adding blocks of colour that compliment the topiary shapes. There are about 100 different shapes in the garden, only a few of which are repeated. (And who objects to seeing multiple up-side-down ice cream cones?) There are no peacocks like you might see at Hidcote or Great Dixter or other 20th century gardens. These topiaries feel as if they are not only reshaped but rethought and remade annually. 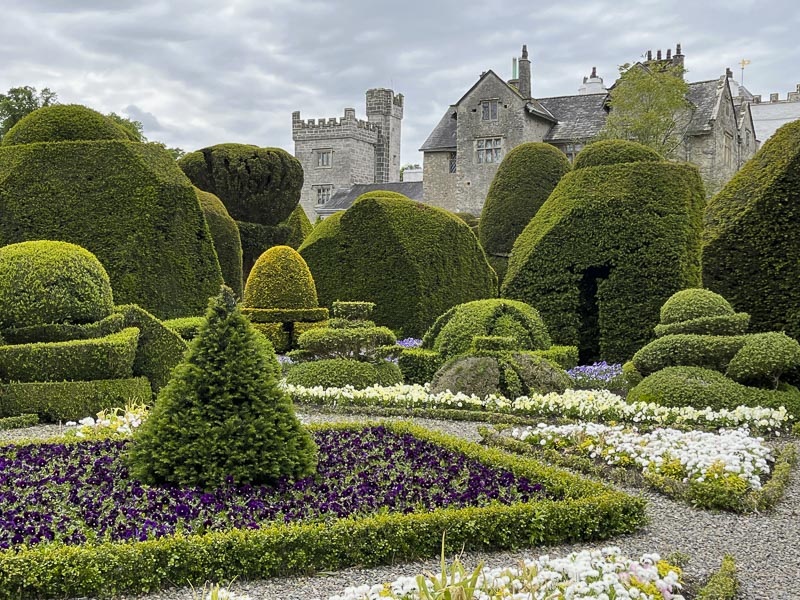 Levens Hall rears up in the background, its crenallations and chimney pots echoing the topiary below.

It’s rare to find an English garden dating back to the 17th century that remains more or less unchanged. As fashions shifted away from formality, most gardens from that period were swept away by Capability Brown and his successors. Levens Hall is an exception. Thanks to an early owner who liked the topiary, the basic layout wasn’t altered and the yews were left in place. The result is trees centuries old still giving us pleasure, still growing and responding to the regular cutting and trimming that their fantastical shapes demand.

An old yew tunnel whose interior was a fantasy of twisted branches conveyed a sense of age impossible to miss — along with the impossible-to-miss smell of wild garlic that was just finishing up when I was there. 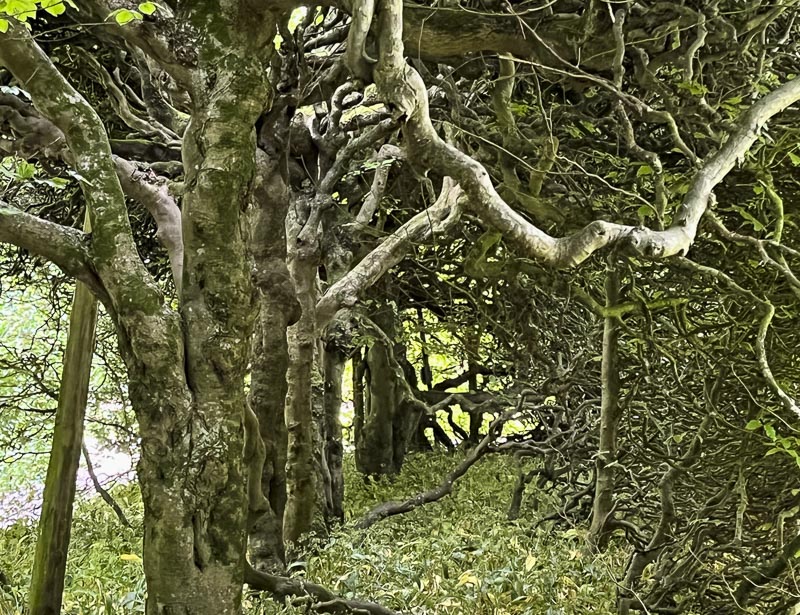 The tunnel led me and my travel companion to a more recent part of the garden, where a round pool covered with water lilies was encircled by an arbor backed by well-trimmed hedges. 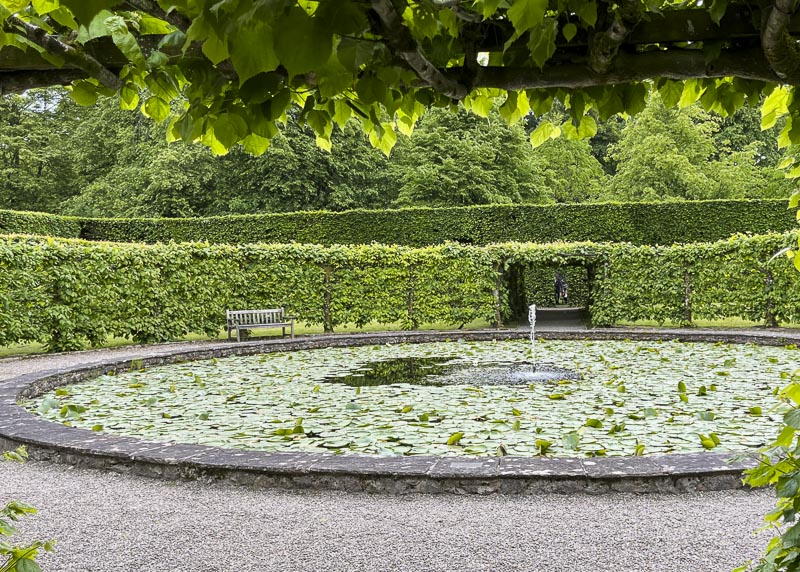 This Fountain Garden was opened by the Duke of Gloucester on May 25, 1994, to mark the tercentenary of the garden. Its design, with entries at four regularly spaced points around the circle, felt exactly right for the space and the occasion.

But for all its antiquity, this is not a fuddy-duddy garden. It honours its past while continuing to evolve. Children were running through a willow maze and bees were buzzing near hives in an orchard of old and new trees, combining new life with old. 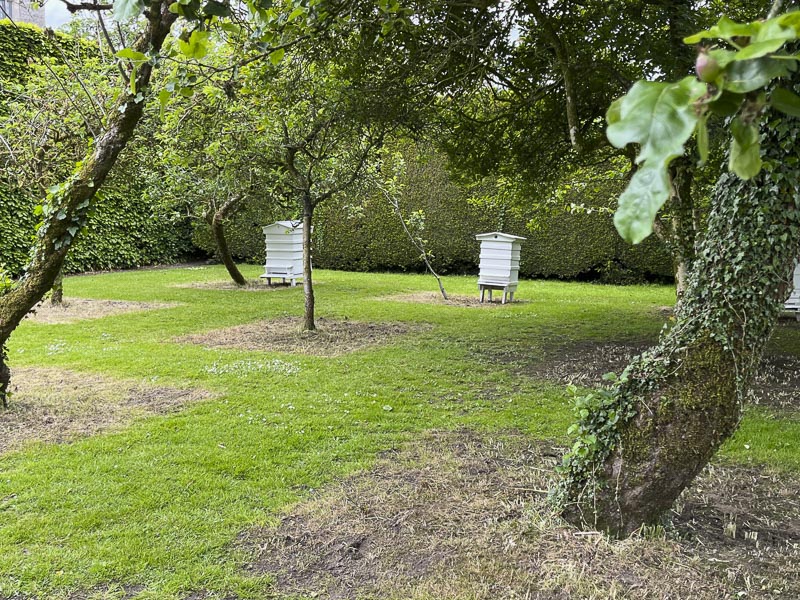 The sense of fun was apparent wherever I looked. One quirky seat in a hedge made me smile … 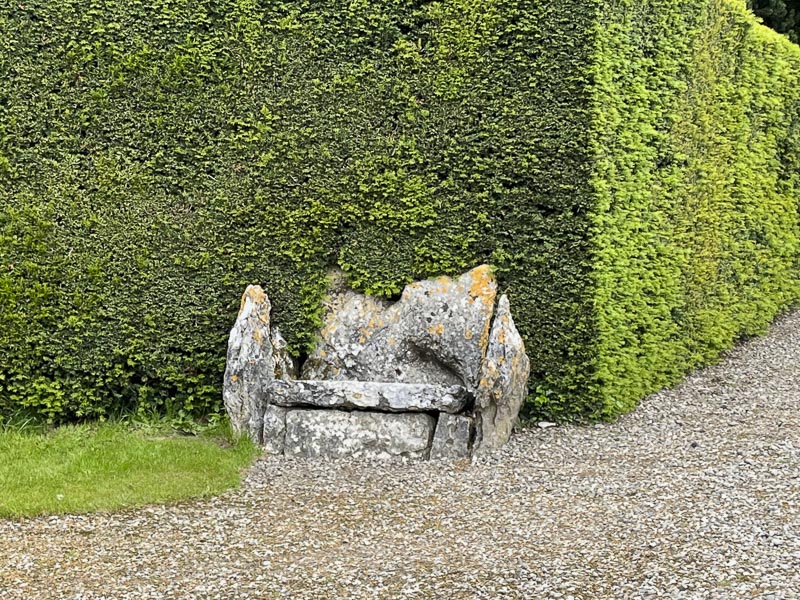 and a second made me sit down to take a break. 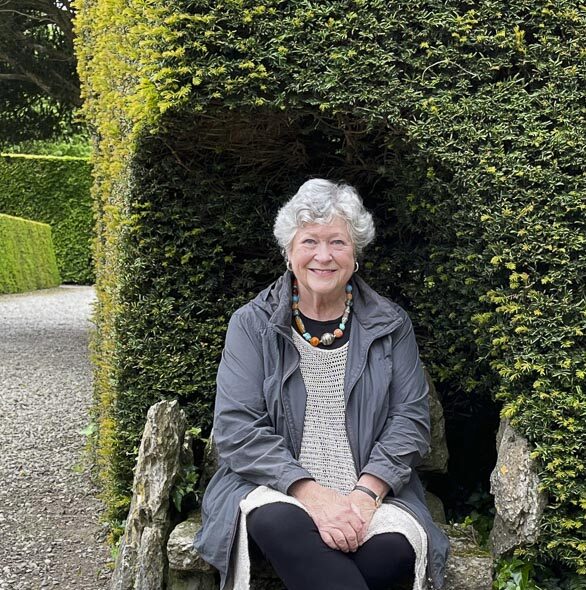 I don’t often ask to have my picture taken but this time I couldn’t resist. I can’t say that the seat was very comfortable!

I treasure the memory of this visit, along with those of the many other places I was fortunate to see. I returned to Quebec a few days ago and haven’t had time to rest ever since, with preparations in full swing for the Open Garden Days on June 25, July 23, August 20 and October 1.

Spots are still available for all days, morning and afternoon, but the June and July dates are filling up quickly, so if you haven’t yet registered, don’t wait too long.

To secure your place, click here. Be sure to choose the correct day and to indicate morning or afternoon. There are no actual tickets; your receipt from PayPal is your confirmation. All funds raised go to support the work of the Massawippi Foundation and the Massawippi Conservation Trust. If you use trails on these conserved lands, you’ll appreciate how valuable that work is!

I look forward to seeing you here, at Glen Villa Art Garden!

Like your older sister, I was not an admirer of topiary….until this blog! Thanks for opening my eyes, once again!

Some topiary leaves me cold, others like these at Levens Hall, are exciting to see. So fantastical!

It’s a shame we have so few trees in the world that people can begrudge any of them being turned into such delights because it spoils their natural shape. We must grow more trees so we can liberate them into fantastical forms AND have one or two ‘natural’ ones.

It was a wonderful day, and a wonderful trip. Grow more trees, shaped or unshaped? Yes, yes, and yes again!

What a remarkable garden! Normally, I’m not a fan of topiary, but your photos of this garden (and descriptions) convince me that I’d love visiting.

I think you would, Lisa. It is fantastical, fun and imaginative. I’m also learning that a lot of people don’t like topiary. Do you think it’s because of the formality or is there something else?

For me, it’s simply because I’m a native plant person and love gardening with plants in their natural forms. But I’m not beyond enjoying this delightfully whimsical garden with such long roots.

Oh, how exciting, Pat. I’ll be visiting Levens Hall for the first time this summer. Thanks for the preview.

I hope you find it as inspiring as I did, Helen. Where else are you planning to go?