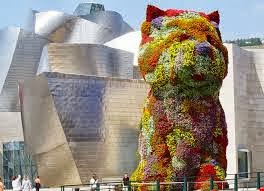 Strictly speaking, the answer is — no. Both are living sculptures, but they are made in different ways. Mosaiculture is also a contemporary form of plant display, while topiary has a long and distinguished history, dating back to  Roman times.

So, what are the differences?
The most obvious one is that topiary uses a single plant to create architectural and sculptural shapes while mosaiculture creates forms by combining a variety of plants with different colours and textures. Traditionally, creating a topiary took a long time; a plant, tree or shrub was clipped and shaped as it grew. Mosaiculture can be created quickly. A metal form is covered with a membrane that holds a light, humid soil and plants are inserted into it, like pieces of mosaic laid into wet cement.

Jeff Koons’ Puppy, seen below in a photo I found on-line, is a form of mosaiculture. But unlike the exhibition at the Montreal Botanic Garden that I wrote about last week, Puppy’s stainless steel substructure is clothed with flowering plants: marigolds, begonias, impatiens, petunias and lobelias. An internal irrigation system keeps this giant puppy happy. And giant the West Highland White Terrier is, 43 feet or 13 metres tall.

Since Roman days, topiary has gone in and out of fashion. Its first revival was in the 16th century in Renaissance Italy, when geometric shapes became de rigeur.  In France the shapes most often lay flat on the ground, as in the photo below from André Le Nôtre’s masterpiece, Vaux-le-Vicomte.

The French influence migrated to Holland and then travelled on to England along with Dutch royalty. William and Mary created a Dutch-style garden at Hampton Court, and what the royals did, the nobility soon copied.  Recently restored. these gardens give a sense of the variety of shapes that gardeners of the time favoured: cones, pyramids, balls, squares, obelisks, spirals. Whatever could be shaped, was.

Soon, topiary was seen in commoners’ gardens, large and small. And as it moved down the social scale, it fell out of favour. In 1713, the English poet Alexander Pope ridiculed topiary in a satiric essay titled “Verdant Sculpture.” He wrote a mock catalogue describing what was available at the 18th century equivalent of the neighbourhood nursery:

* Adam and Eve in yew, Adam a little shattered by the fall of the tree of knowledge in the great storm, Eve and the serpent very flourishing.

* The tower of Babel, not yet finished.

* St. George in box; his arm scarce long enough, but will be in condition to stick the dragon by next April.

* A quickset hog shot up into a porcupine, by its being forgot a week in rainy weather.

Some two hundred years later, topiary made a come-back, due in part to a book written by Nathaniel Lloyd, father of Christopher, called Topiary: Garden Craftsmanship in Yew and Box. His timber-framed manor house, Great Dixter, contains some wonderfully eccentric topiary.

Almost anything can become topiary. In the garden designed by the current owners of Iford Manor, near Bath, small animals process across a lawn towards a sofa and chair for a nice cup of tea.

One of the best know bits of topiary humour is in the U.S., at Ladew Gardens in Maryland. Created in the 1930s by the socialite and huntsman Harvey Ladew, the gardens are dotted with topiary treasures. Most famous is the fox-hunting tableau of horse, rider and hounds.

Extraordinary works of topiary art were created by Pearl Fryar at his garden in South Carolina. I haven’t seen this garden — it’s on my list of want-to-sees — so the photo below is taken from the garden’s website.

And what of mosaiculture? Unlike topiary, it doesn’t have much of a past, but does it have a future?

Two examples suggest it does, particularly in the form of vertical gardens. This flowery house greets visitors at the entry to the Reford Gardens in Metis, Quebec. I took the photo last year in late September, and the plants which must have been installed months previously were still in good shape. I don’t know how much maintenance it required.

Vertical gardens designed by Patrick Blanc clothe buildings around the world. This photo from his website shows the Caixa forum in Madrid. I include it as a prelude to posts to come, showing gardens in Spain. That’s where I am now, and where I will be for the next few weeks. I look forward to sharing what I see with you.

We must have passed over the Atlantic. I’m glad to be home from my jaunt to England and Italy but am looking forward to hearing about your discoveries in Spain.

I’m equally interested in finding out what you discovered in Italy — I’m taking a group there next spring. Most of the itinerary is fixed but always room for something fabulous!