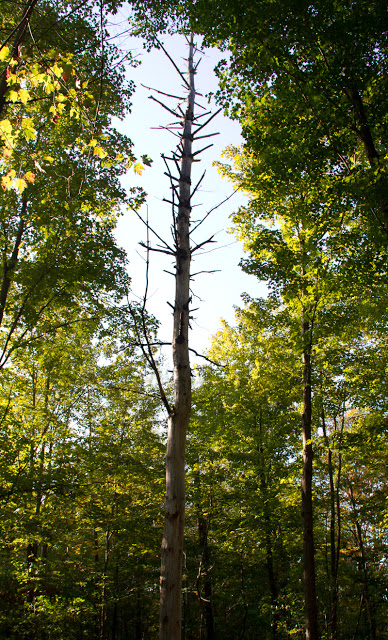 Several weeks ago I started a three-part series about an art installation at Glen Villa called In Transit / en Route. I posted the first two parts and intended to post the third in week three. But California and all I saw there captured my attention and my blogging time. So the third part of In Transit / en Route went to the bottom of the pile. Finally, though, it is back at the top. So here it is, the third and
final installment. If you want to read (or re-read) the first or second post, here they are.

The clearing in the woods marks the end of In Transit / En Route. When people arrive there, they know they’ve reached a special place.
A black tube runs around the edge of the clearing, separating it from the untouched forest. Standing inside the area marked by the tube are twelve tall posts, with red painted bands. Near the center of the clearing is a tree.
A few years before I began working on In Transit / En Route, I came across this tree, a strikingly tall pine. I’d been looking for a special tree for a year or more, and as soon as I saw this pine, I knew it was the one. It dominated the space, soaring to the sky. Best of all, it was dead.
I was elated. A dead tree was exactly what I’d been looking for. It was a natural element in its woodland setting, and a marker that spoke silently about the passage of time. No, I’m wrong. It didn’t speak silently, it shouted  — it was that tall, and that impressive.

Time is something I think about a lot these days. It’s something I don’t have enough of, not only because I’m busy, but also because I’m growing older.
In Transit / En Route is an art installation that marks the passage of time. The clearing is a sundial. The shadow of the dead pine tree falls against a post, painted with a single band, or with two, or three,  or eleven or twelve. The shadow marks the hour.
At least, that’s the theory. Daylight savings time messes things up. So do cloudy days. But In Transit / En Route isn’t about telling time as much as about focusing the mind on its movement.
In the center of the circle is the final sign. It isn’t a question like the signs that have come before, it’s a statement.  Like the big red dot that marks your location on a map, this sign tells you what I hope you know. You are here. Now.

There’s a bench at the edge of the clearing where you can sit and enjoy the peace of the woods. My neighbour Greg Hirtle carved the words on the seat: In Transit / En Route. The bench itself is, deliberately, not very comfortable. It is simple, a straight-sided pine box. Sitting on the bench, you can look at the tree, look at your watch, exclaim in wonder, is it that late already? I’d better get moving.

When they leave the clearing, some people decide to retrace their steps to the upper field, re-reading each sign as they go. Some follow the path into the woods and fields beyond, perhaps expecting to come across something more, perhaps simply enjoying the walk. (I have ideas about what may come next… but when is a much harder question to answer.)

It doesn’t matter which choice they make, whether they return or keep on going.  I think the journey is what counts. That, and thinking about it along the way. 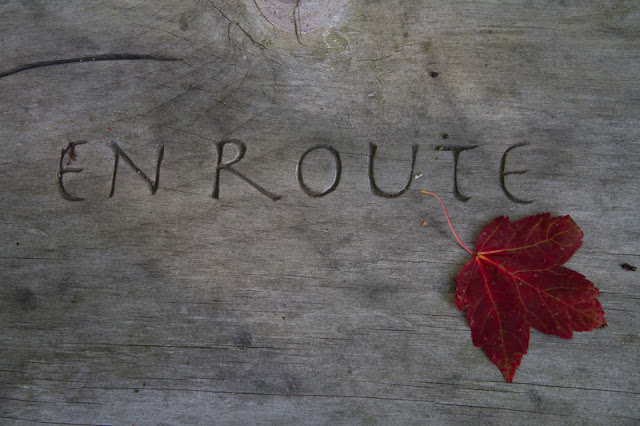