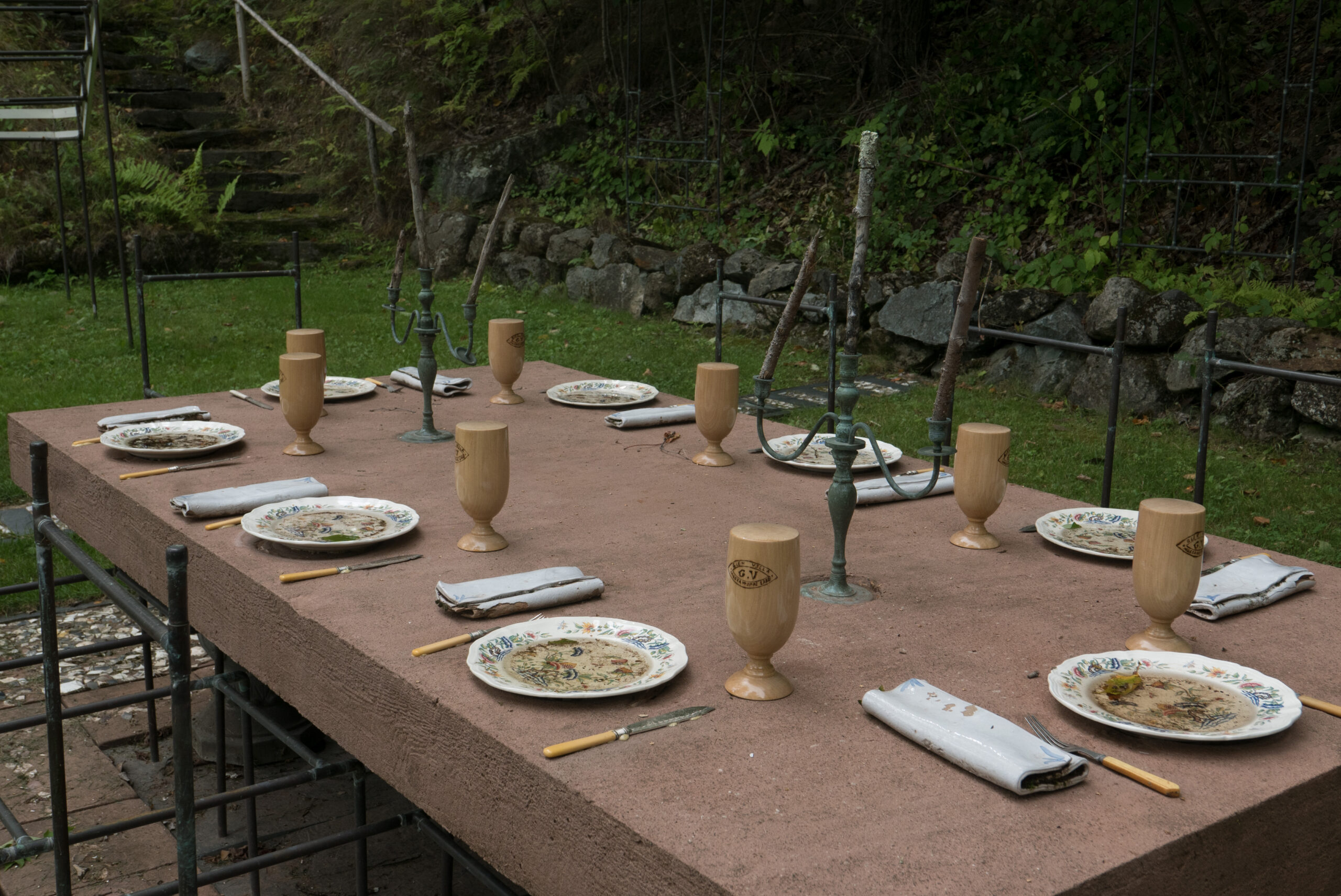 In January last year, I laid out six garden goals for the year ahead, never believing I’d be able to achieve them all. I put them on paper nonetheless to give myself something to aim for and, to my surprise, I find that over the last twelve months I completed five of the six. This may be due to Covid-related restrictions that kept me closer to home, or it may be because I was intent on using the time well, but regardless of why, I’m pleased with what I managed to do.

I finished renovating the dining room table on China Terrace. I replaced the plates and goblets  … 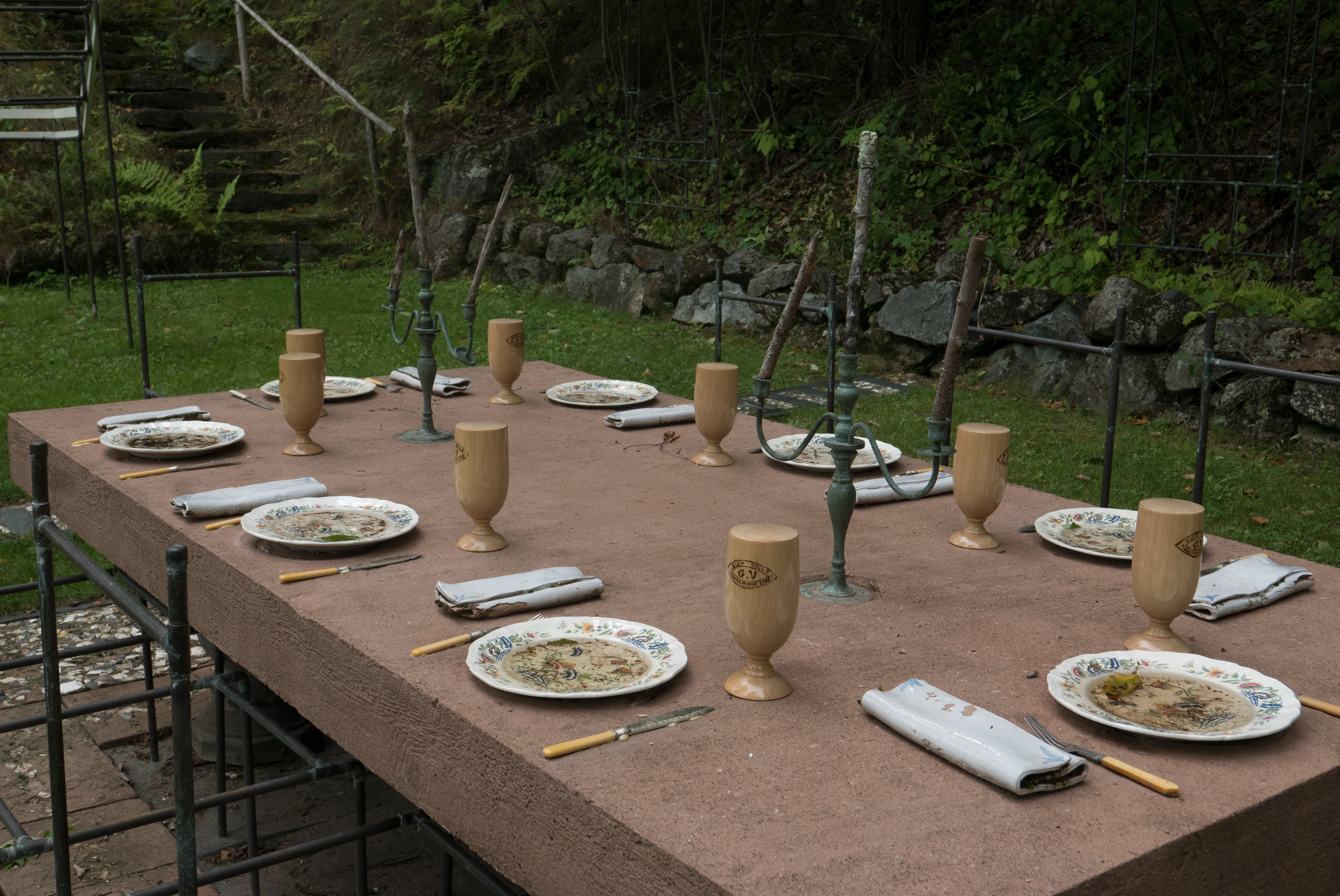 The new plates and goblets were put in place in late summer.

and added new napkins that I made with help from Lucy Doheny, our very talented local potter. 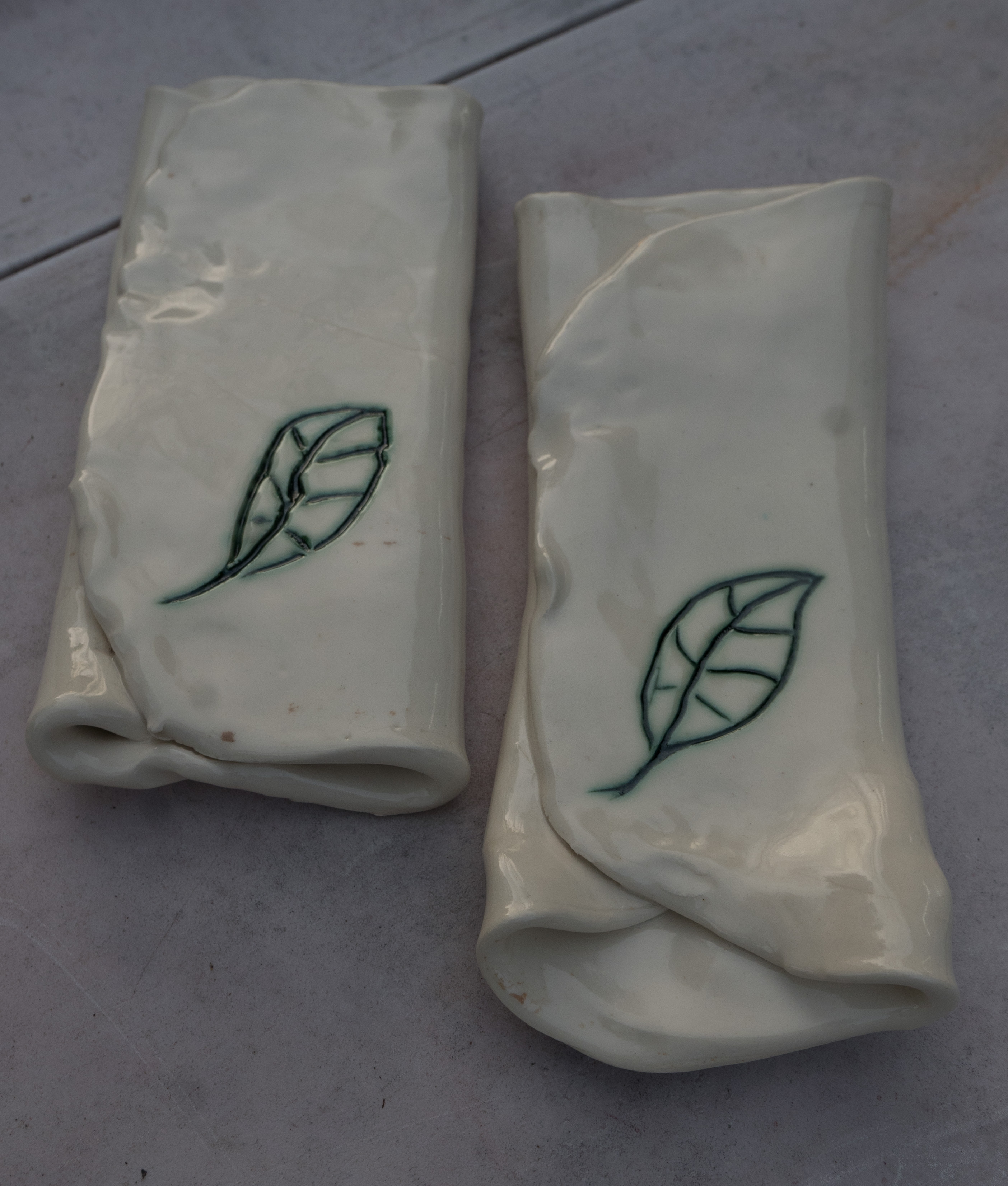 The incised design and imprecise folds make these napkins more casual than the previous ones.

In the year ahead, I will work on the iron-frame bed, re-shaping the pillow and re-doing the moss quilt. 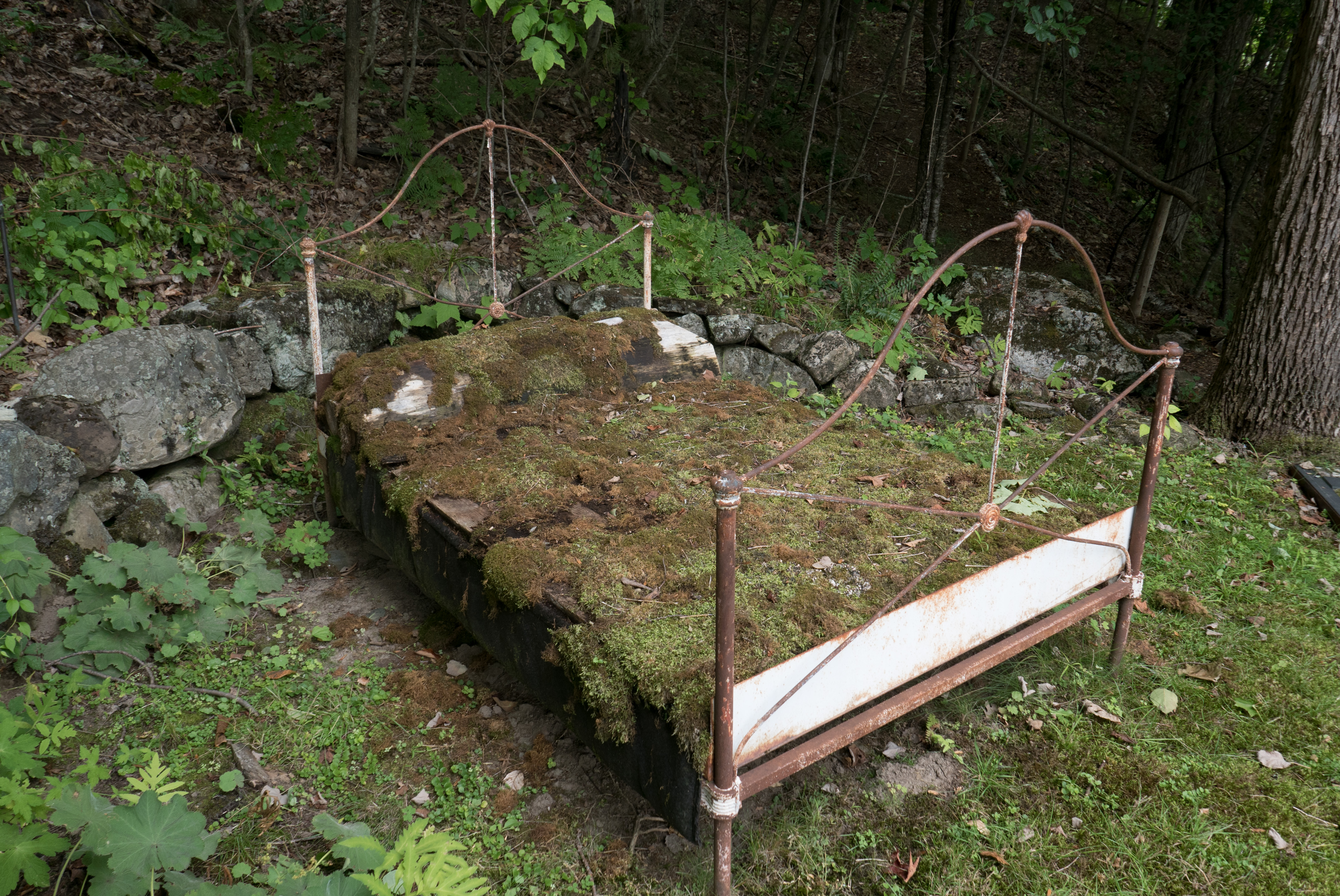 The original quilt pattern on the bed has disappeared entirely and the moss itself doesn’t look great anymore.

A big project in 2020 was to design and plant the area in front of the foundation wall of the old Glen Villa Inn.  I tried a number of variations and settled finally — thanks to my friend Myke Hodgins, the Montreal landscape architect — on a simple design, a long, straight bed shaped at both ends like an arrow. This design reflects the travel patterns of guests who came from the south to stay at the Inn in the early 20th century and continues to make the historic connections that are so important at Glen Villa visible today. Shown here at the end of September, the North South Arrow is still missing some of the plants I intend to use. Filling the gaps is an obvious ‘to do’ in 2021. 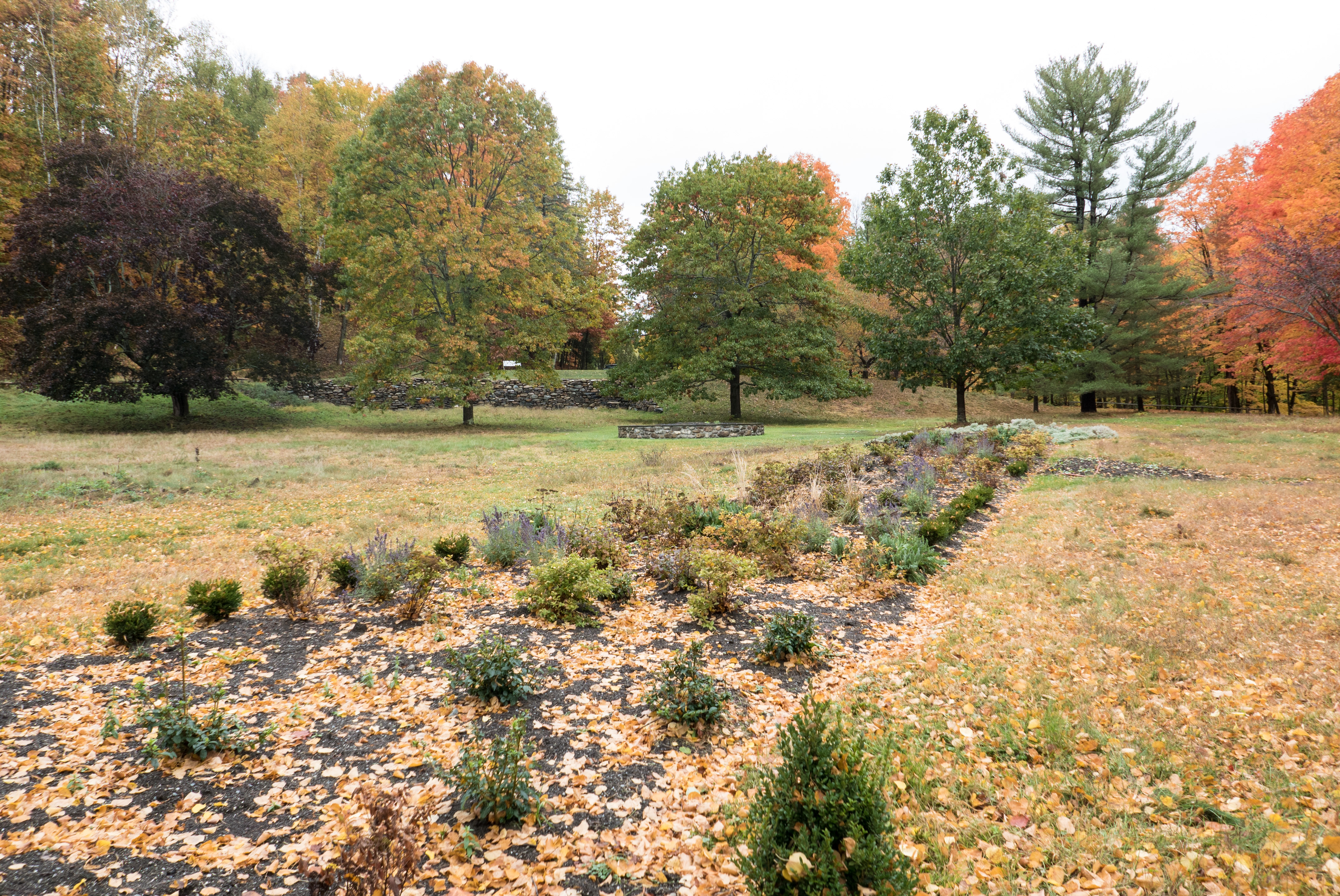 The north south orientation provides the greatest exposure for the sun-loving plants I selected.

The re-built circular wall in front of the hotel will become the Compass Rose. After a lot of research and with advice from Bob Osborne of Cornhill Nursery in New Brunswick, I chose Chinook Sunrise to fill the currently empty circle. 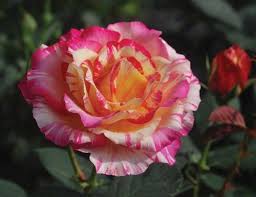 Chinook Sunrise is from the Canadian-developed 49th Parallel series of roses.

Goal #3 involved the Sundial Clearing that is the destination point for In Transit/En Route, one section of Timelines. The clearing needed serious attention after the dead pine that had served as the gnomen bit the dust in an autumn storm in 2019. In a nice bit of serendipity, a big rock that had to be moved to make way for the North South Arrow turned out to be much larger than it appeared and, when placed upright in the center of the Sundial Clearing, became exactly what was needed to replace the pine. 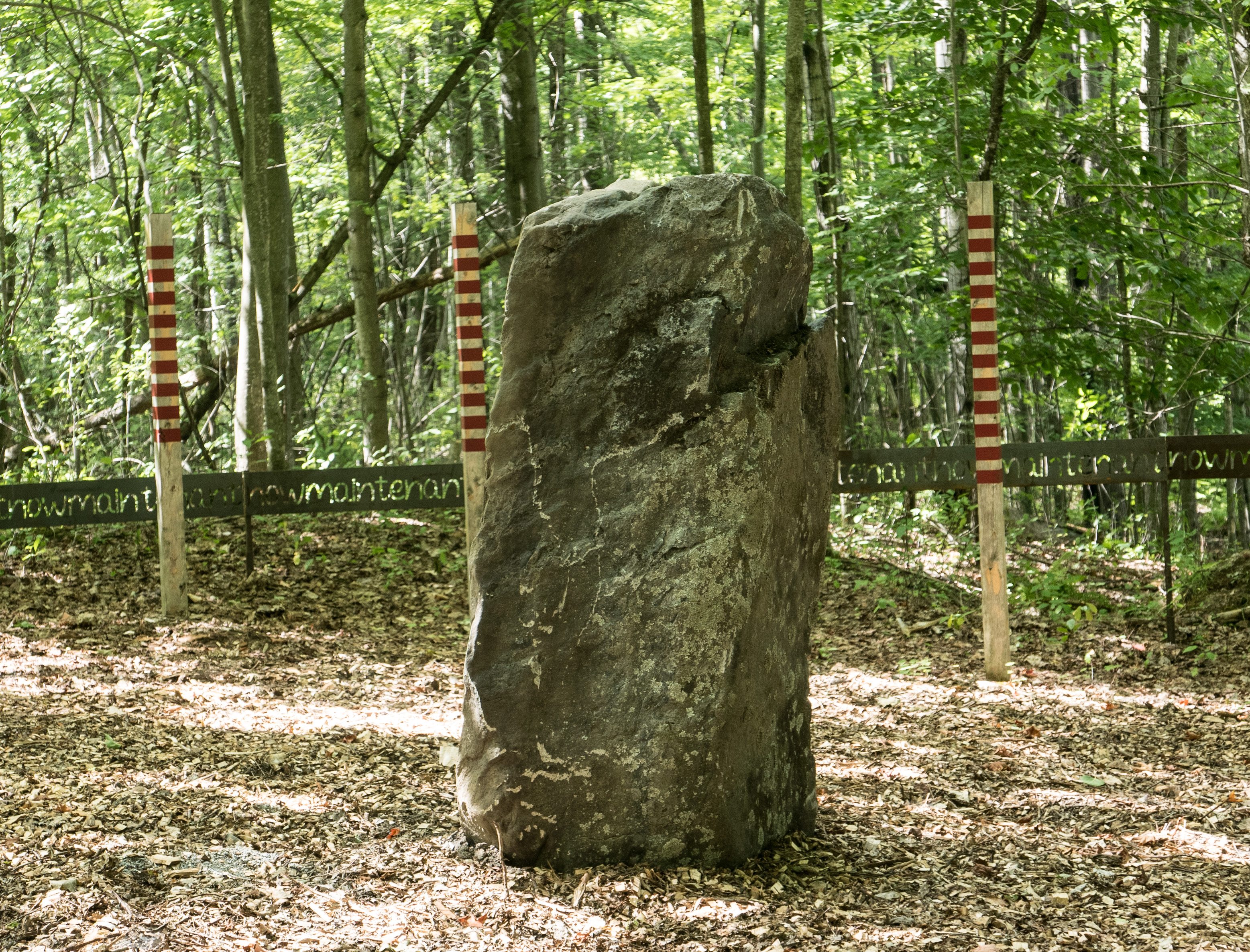 The stone stands in the middle of the clearing and its shadow marks the hour on the painted posts.

We made a new bench to replace the old one that was rotting and added a steel band, laser cut with the words ‘now maintenant’ to replace the black plastic tubing that previously enclosed the circle. 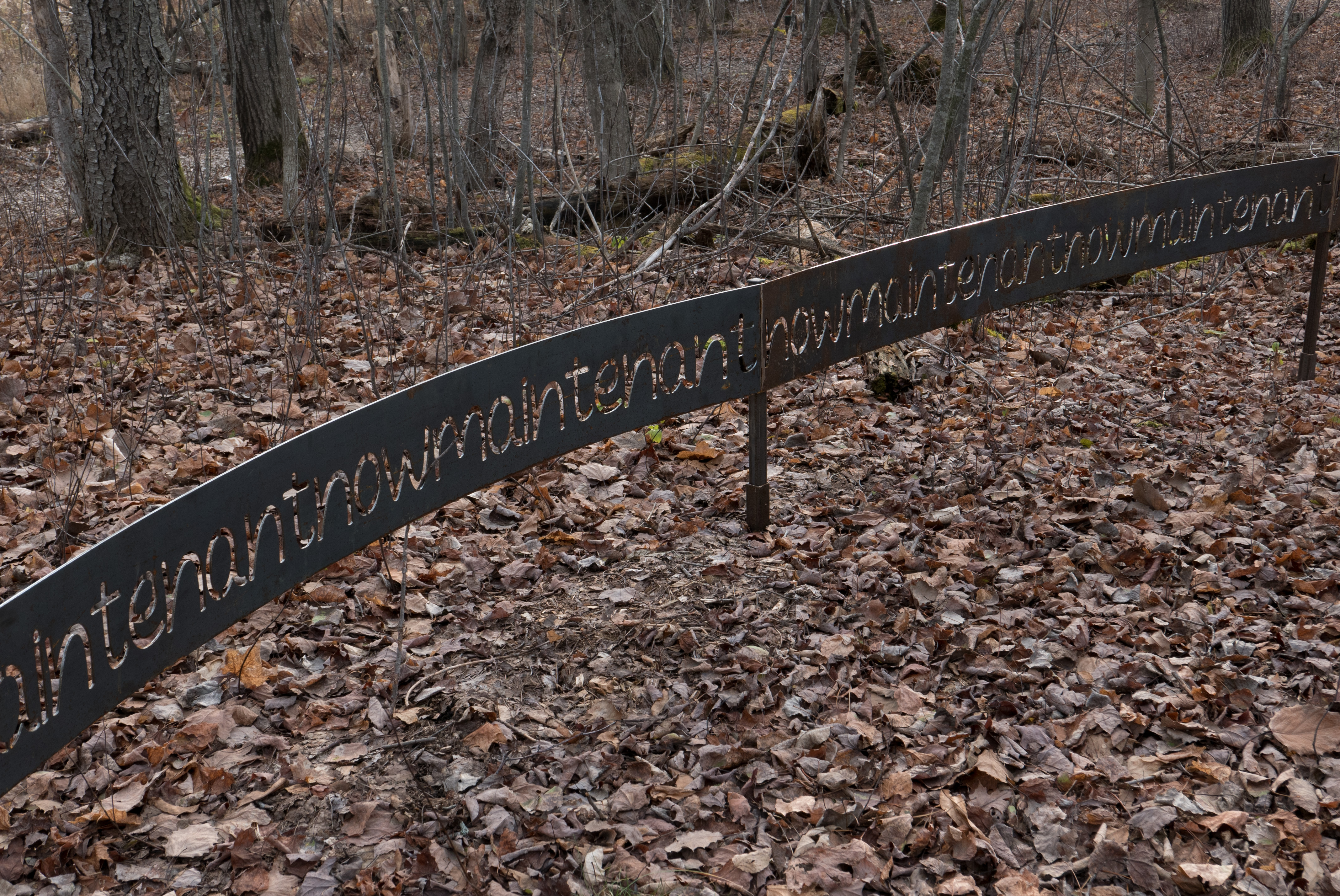 The steel band is rusting nicely.

The fifth project involved extending Timelines to include the big outcropping of rock that was an original inspiration for the trail itself. In another bit of serendipity, we discovered water when we made an exploratory hole beside the rock. Soon we had a pool with mysteriously dark water. 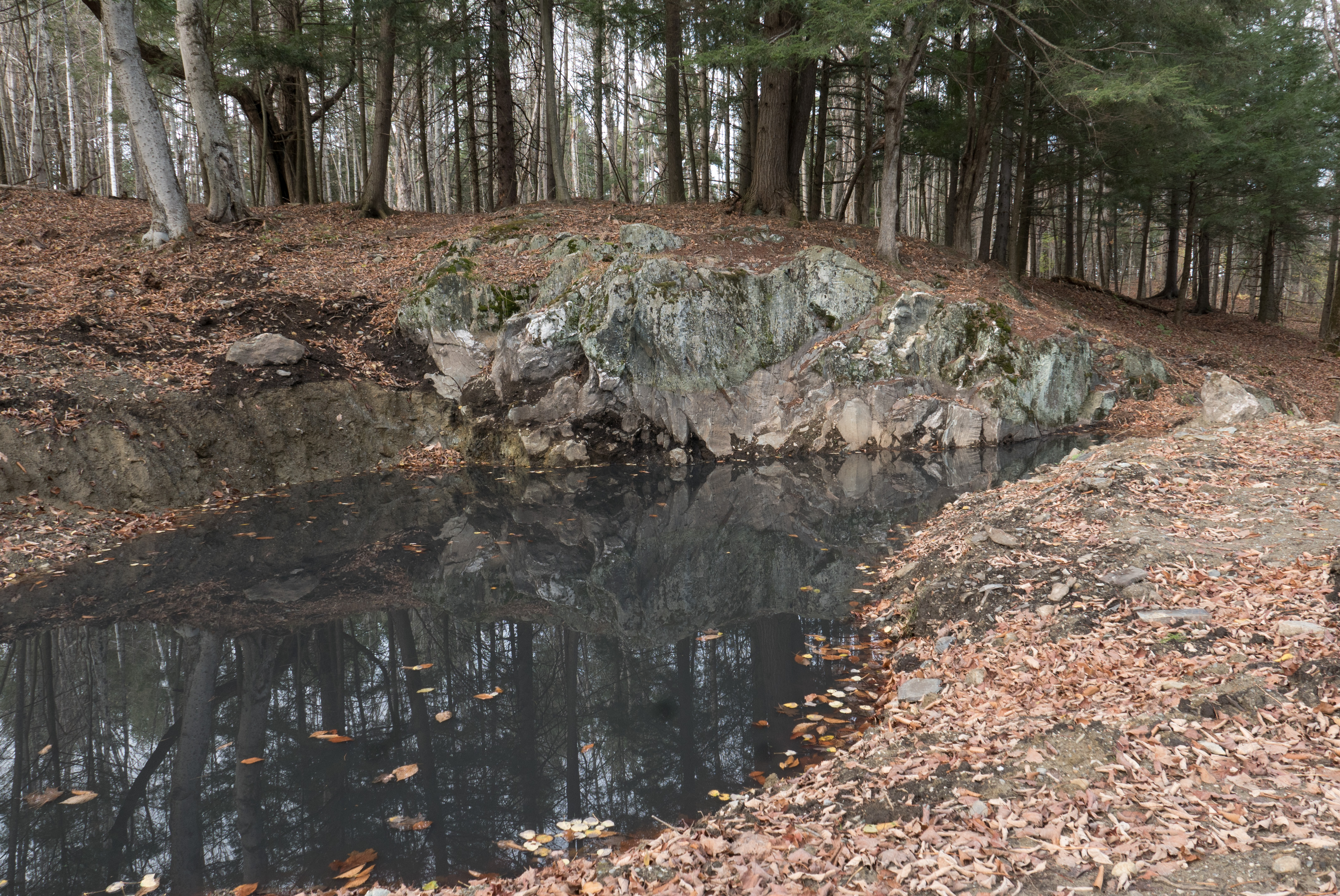 The water level rises and falls over the seasons. I have yet to see the frozen version.

This pool became part of Continuum, an extension to Timelines that wanders through a field, alongside a stream, into the woods and past the pond, looking at the interconnections between trees, stone and water. In the late fall we arranged rocks on a slope by the pond in the shape of a maple seed, or samara, and over the last month or so, I’ve been drilling rocks in the same pattern, the negative version of the positive outline on the slope. 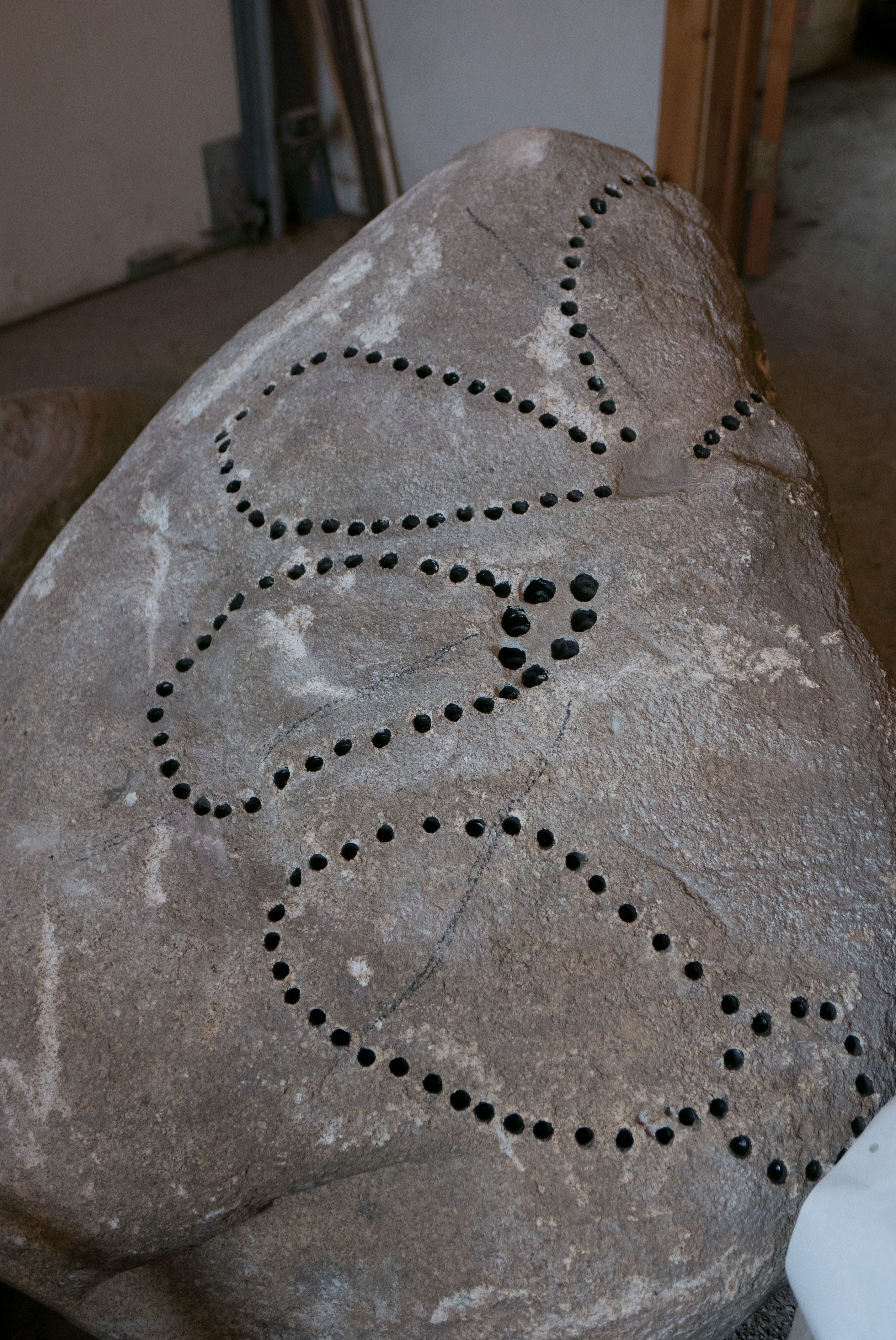 I haven’t finished drilling this rock yet but the pattern of a maple seed, or samara, is almost complete.

I’ve also been working on another extension to Timelines that looks at Greek mythology through feminist eyes. This project is in its early stages but I hope to finish work on this section called Mythos before summer.

Looking back, I can see how much I accomplished. The one goal I didn’t accomplish was fencing in the Lower Garden to keep the deer away. I’ve been thinking about doing this for several years, but finding a design that works in the space isn’t easy. 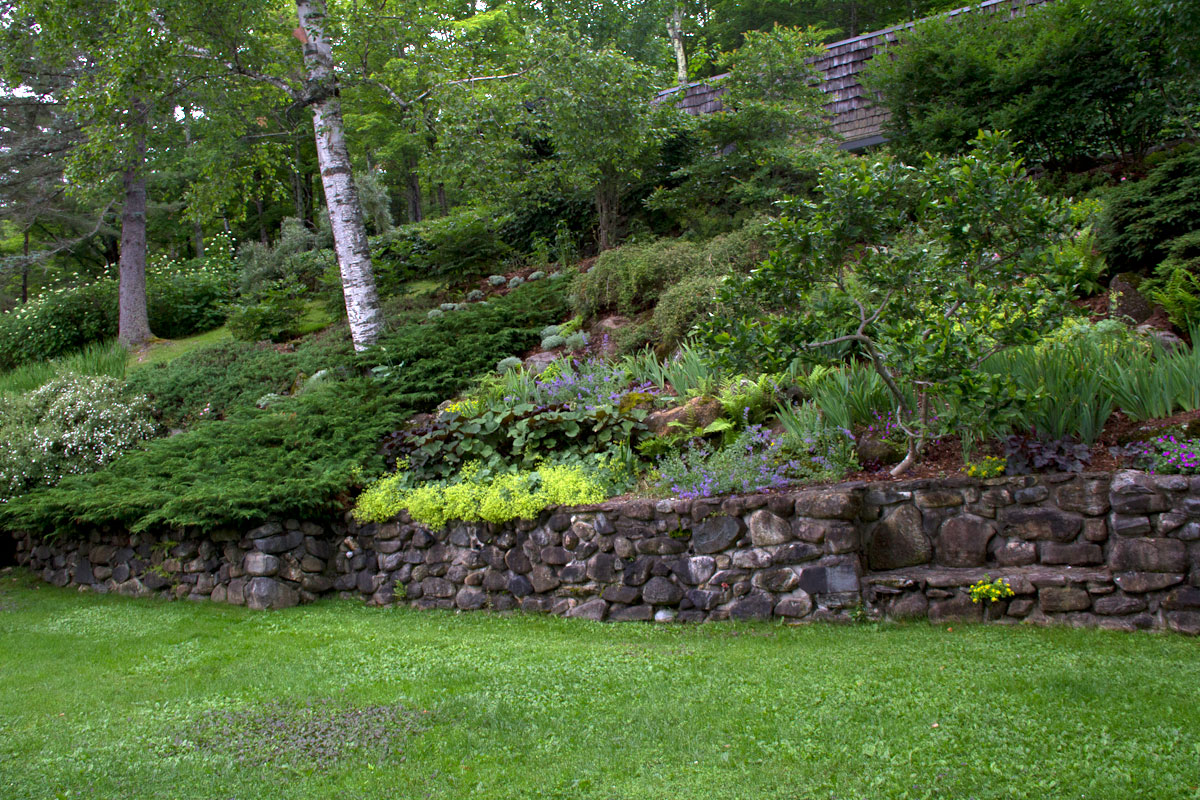 With a fence I’d be able to use plants that deer love… and wouldn’t that be nice!

Nor did I keep the one resolution I set, to photograph a particular area in the garden once a month, as close as possible to the same day. I started well, with photographs of the Cascade in January and February, but in March, my resolution began to go south, as resolutions are wont to do. 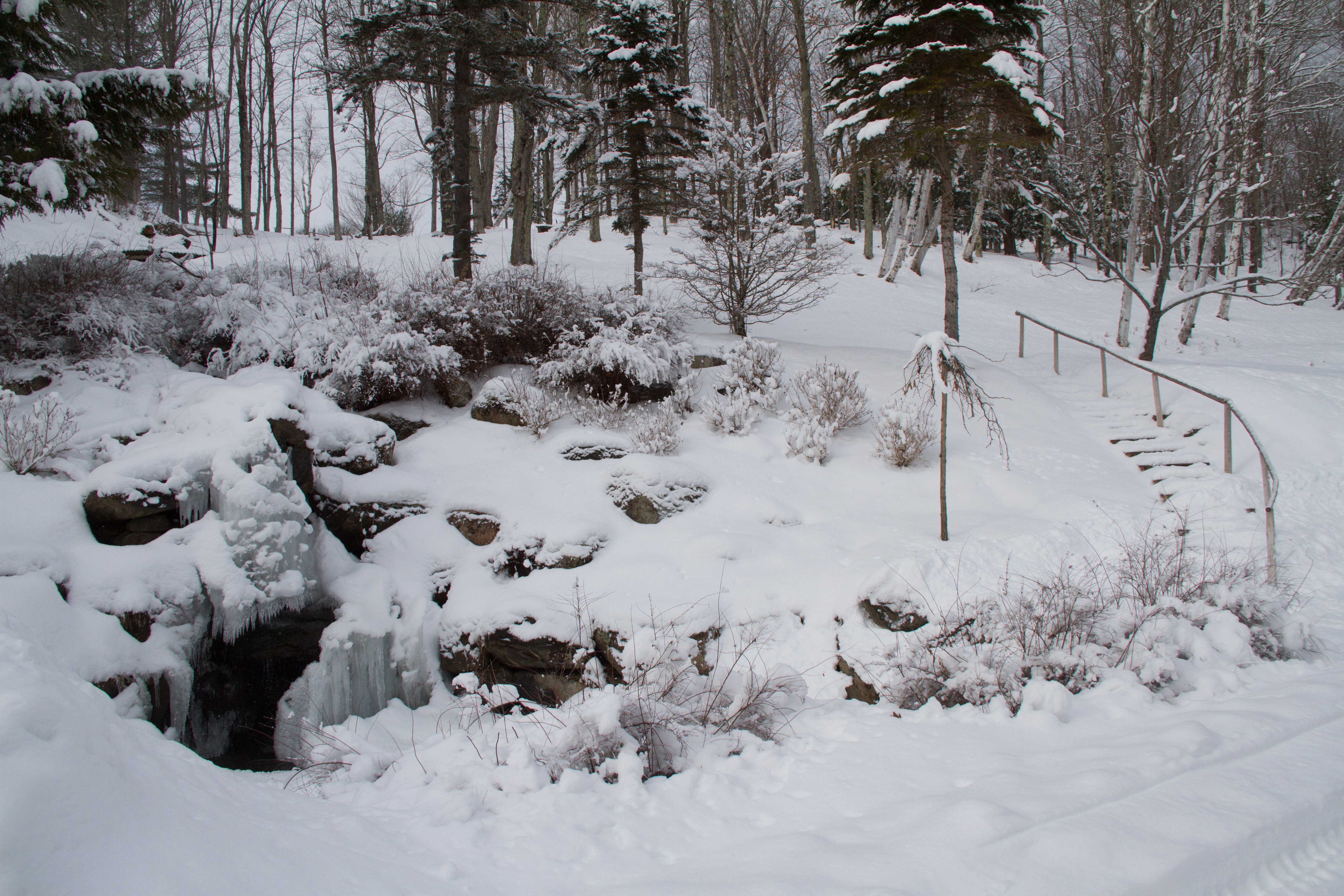 This photo shows the Cascade in January 2020. It looks about the same now.

Despite my inability to stick to a resolution, and even more significantly, despite the extraordinary happenings in other parts of the world, the year 2020 was a good one in the garden. I hope 2021 will be even better. In the garden and beyond.