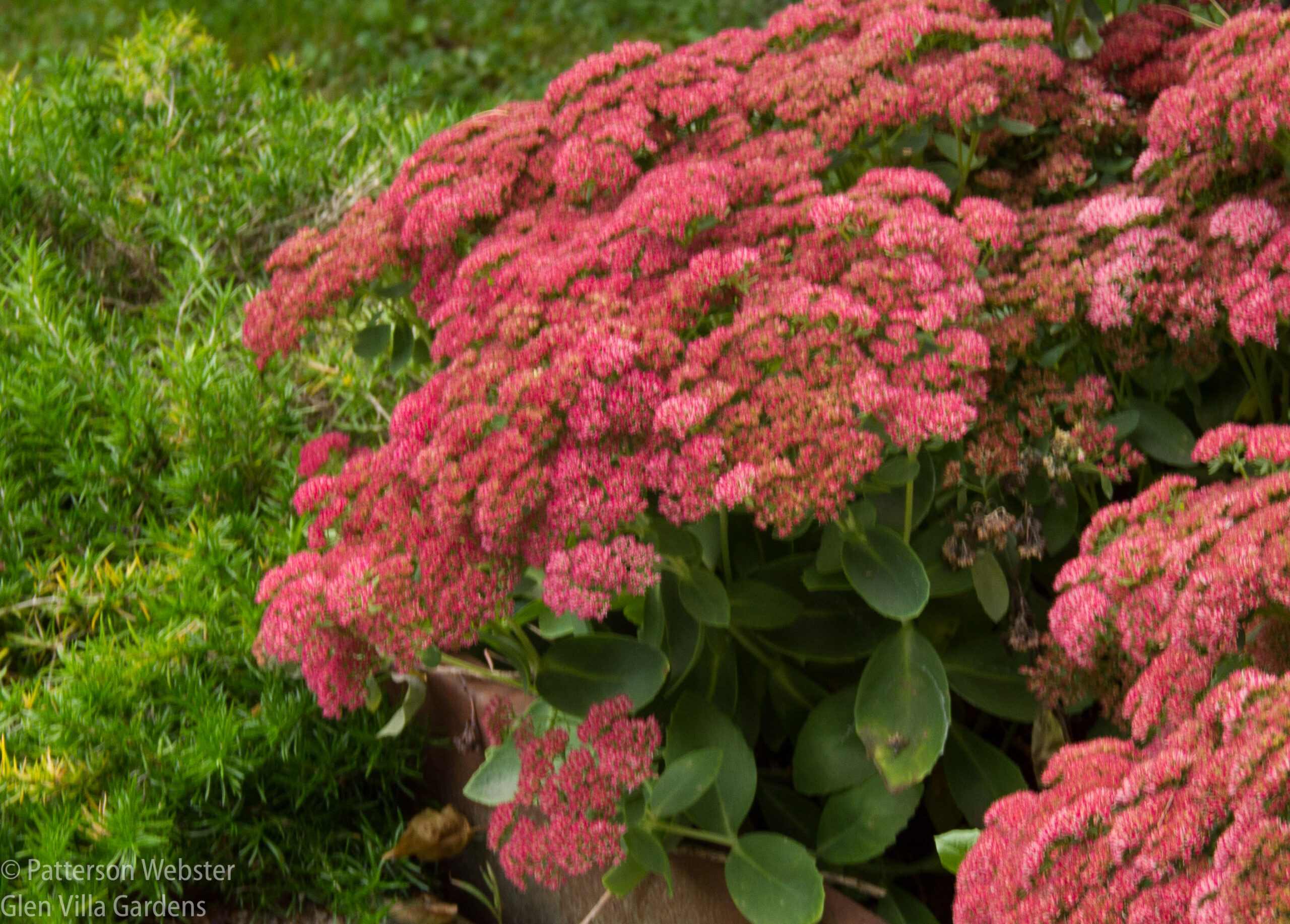 Today is Thanksgiving day in Canada, and there is much to be thankful for. In the garden, colours are bright. 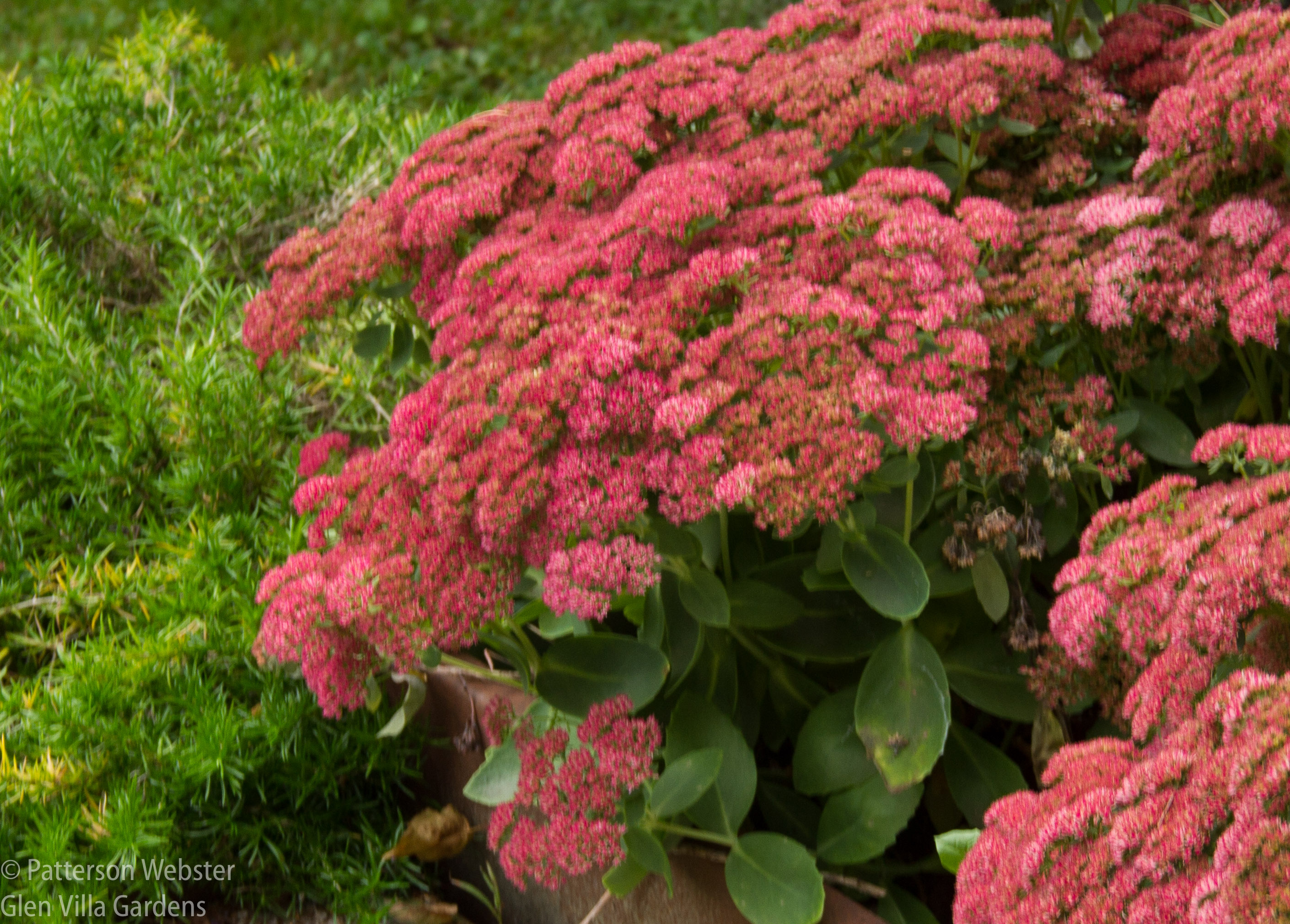 Sedum ‘Autumn Joy’ lives up to its name.

Even when the flowers have faded, I’m thankful for work that’s been done.  At the Aqueduct the catmint ( Nepeta racemosa ‘Walker’s Low’) has been cut back, making the bed look more like a monk’s shaved head than the overgrown mop of foliage it was only days ago.

Those stubs of nepeta between the boxwood should grow exuberantly next summer. I hope the iris I added will, too.

Also looking bare after its annual cut is the Big Meadow. With the hay bales still in place, it looks less like a lawn and more like the farm field it used to be.

This year we baled four bales, three of which you can see here. This is one fewer bale than last year. I think a drier summer accounts for the change.

Thankfully uncut are the ornamental grasses by the Skating Pond. They are at their best in autumn, particularly on a breezy day.

You can see two ornamental grasses here, Miscanthus sinensis ‘Morning Light’ in the foreground and Calamagrostis ‘Karl Foerster’ in the shadows at the back.

Usually, fall colours hit their peak at Thanksgiving, but this year the colours are muted, less vibrant than normal. I think this is due to the hotter and dryer days we had throughout September  — many days felt like summer. These warm days have continued into October, making fall still seem a distant prospect.

Going through the woods with my granddaughter, fall was more evident. We spotted some bright colours, but they often appeared in isolated patches, surrounded by green.

White birch trees are common in the Eastern Townships of Quebec.

At first I was quite excited, thinking these were yellow or tulip poplar leaves (Liriodendron) that aren’t typically hardy in this part of Quebec. I knew I was wrong as soon as I check an identification chart.

Ferns were clear markers of the change of season. Many have turned from green to toasted gold…

A typical fall scene in my woods, with ferns, ash trees and young poplars making a come-back.

but others, like Christmas ferns (Polystichum) and maidenhair ferns (Adiantum pedatum) still wear their summer clothes.

My granddaughter can now identify maidenhair ferns by their black stems and tiara-like shape.

The woods at Glen Villa comprise different ecosystems. Some sections are full of tall straight trees with almost no undergrowth.

These trees near the edge of an old farm field are part of a major project I’m working on now. I’ll write more on that when the project is a bit more advanced.

Others are deep and mysterious.

This forest of tall pines was planted about 25 years ago. It always looks ghostly when photographed. I hope someone can tell me why.

Some places in the woods hint at earlier times, when the land was cleared for farming.

An old rock pile near an even older stone wall suggests that this was once a farm field.

In other places, the hints turn into shouts and the land tells its story loud and clear.

Once upon a time there was an apple orchard here. The  low stone wall marked the boundary.

Garbage collection and municipal dumps are relatively new things in many rural areas, including this one. Before they existed, farmers used the woods.  This old dump close to a trail contained many things you might expect: tin cans, glass bottles, rusted metal and an old inner tube.

I wonder how long it took for this rubber boot to disintegrate as much as it has. Years or decades?

It also contained some surprises.

Once upon a time someone gave thanks for this modern convenience. It isn’t as convenient as it used to be.

Even if they are less vibrant than usual, colours still abound in the woods, on branches and on the ground.

Fallen apples in the woods may not be the perfect specimens you buy in a grocery store but they still make very good apple crisp.

Without doubt, though, the most colourful part of Thanksgiving — and definitely the most delicious — was the turkey.

A 13 lb. turkey was plenty for 9 people, with lots of left overs to share.