You are here:
Design 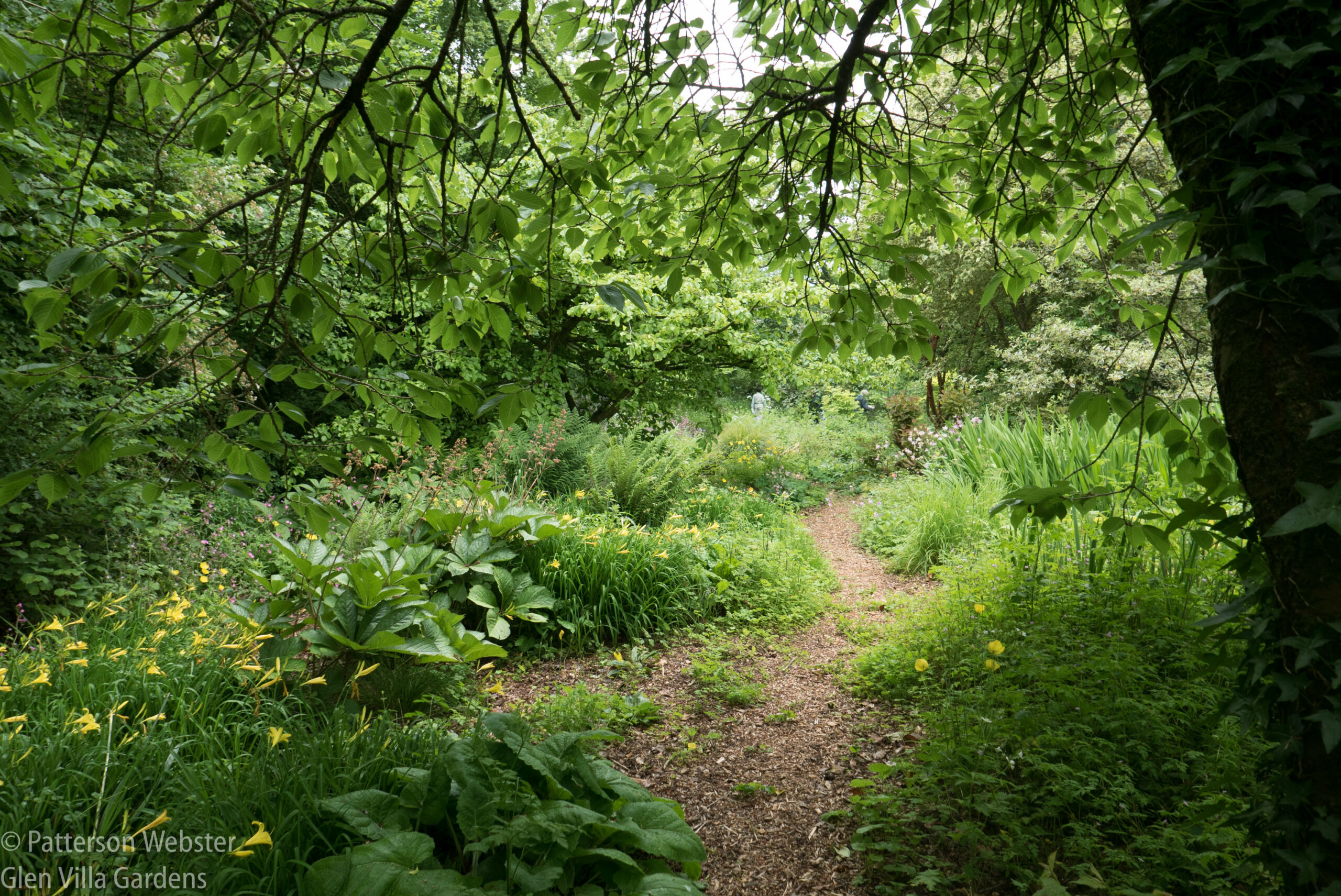 Working on Timelines, the 3 km trail at Glen Villa that opened last weekend, started me thinking about trails and paths more generally, and particularly about the way the size, shape and the material a path is made of affect how we respond.

What a difference there is, for instance, between the effect of a winding path made of wood chips … 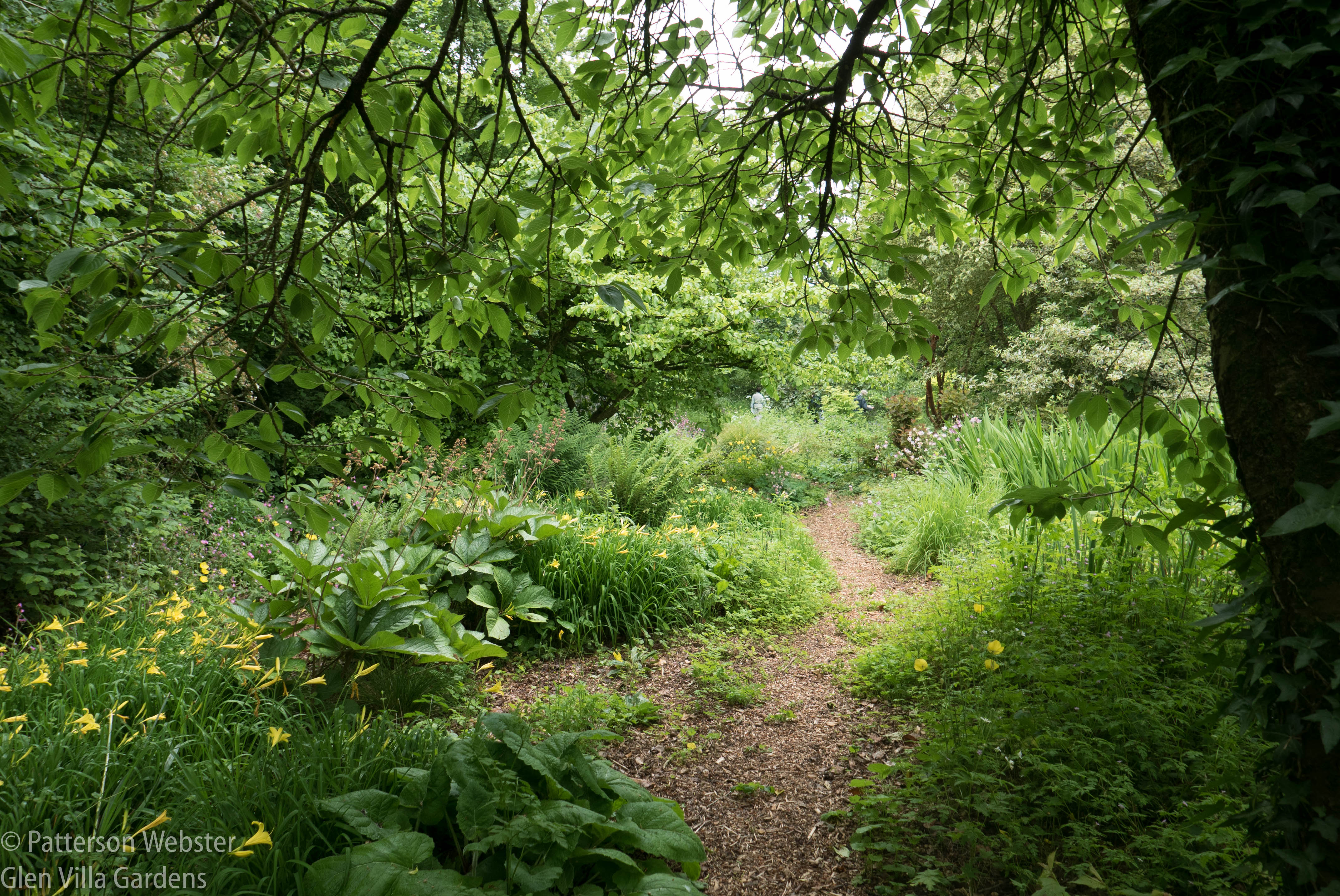 This photo shows a wood chip path at Holbrooke Garden, a naturalistic garden in Devon.

… and a straight path that leads to a symmetrical façade. 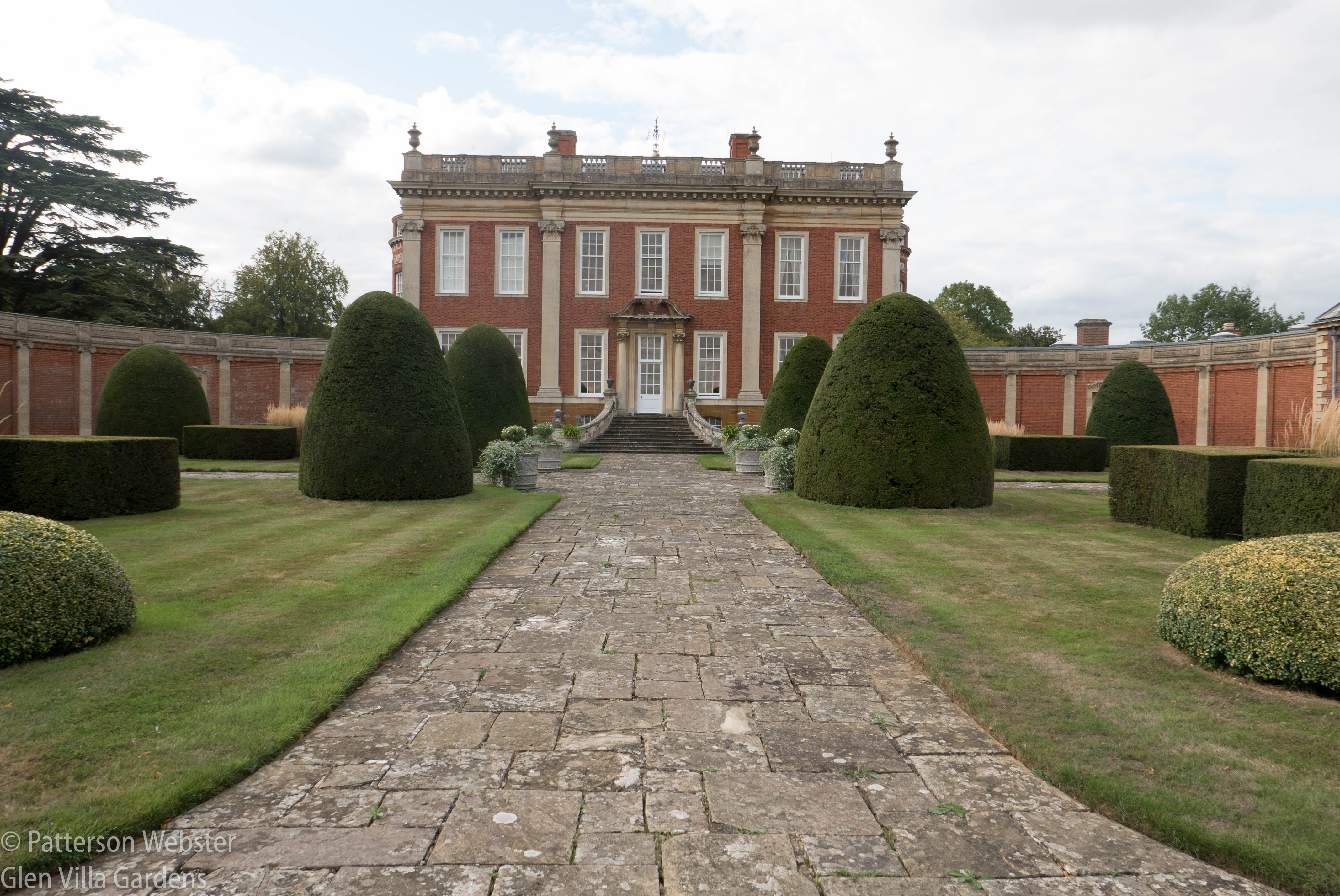 A tightly laid stone path leads to the Queen Anne façade of Cottesbrooke in Northamptonshire.

Scrolling through the thousands of photographs I’ve taken over the years in gardens around the world, I quickly realized that even paths made of the same material — stone, for instance — can create responses that differ considerably. A path made of straight-cut stones tightly laid suggests a higher level of formality than straight-cut stones laid in a more random pattern. 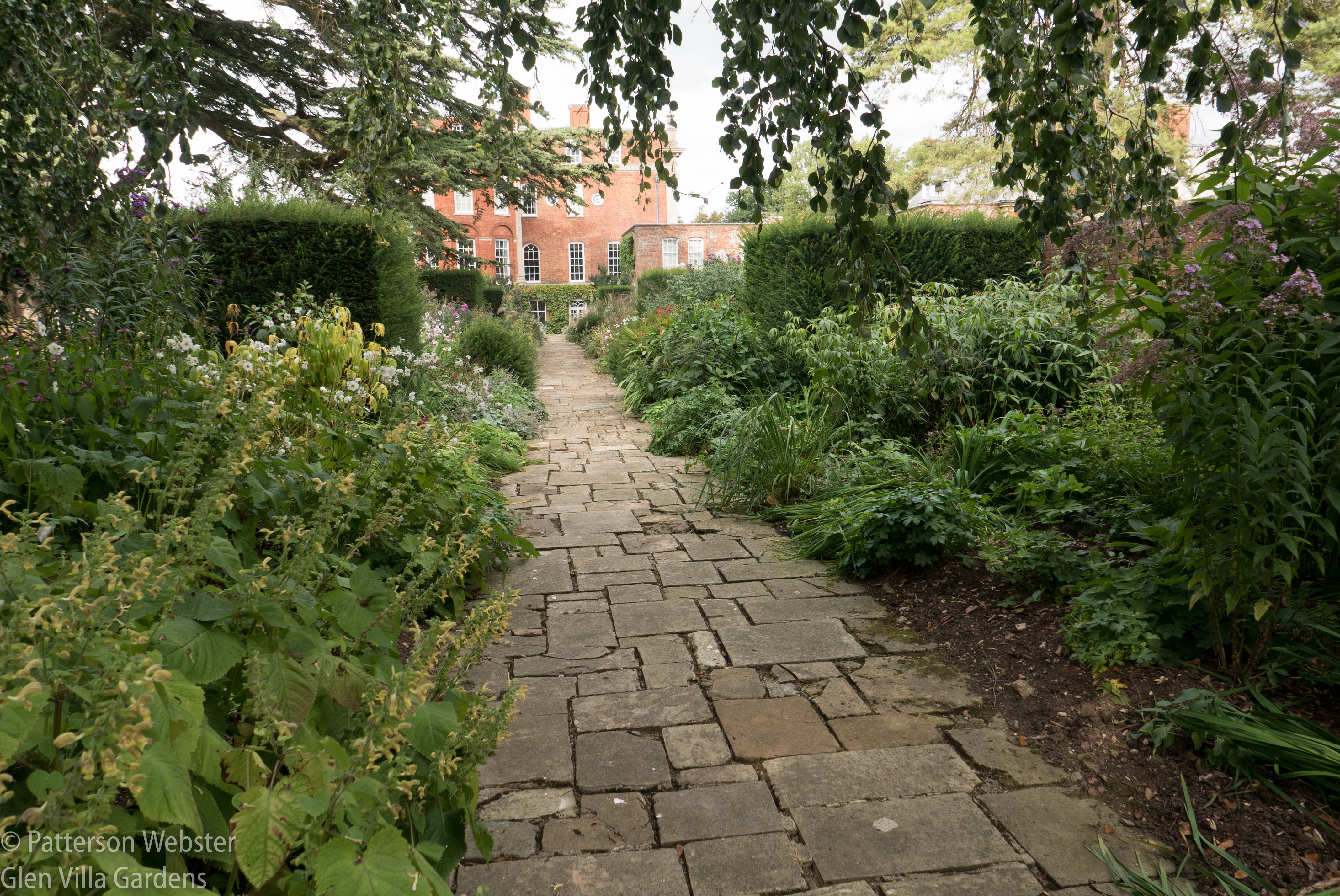 The sense of informality is heightened when the path is bordered by loosely planted flower beds.

When the stones are shaped irregularly and edged with gravel, the effect changes again. 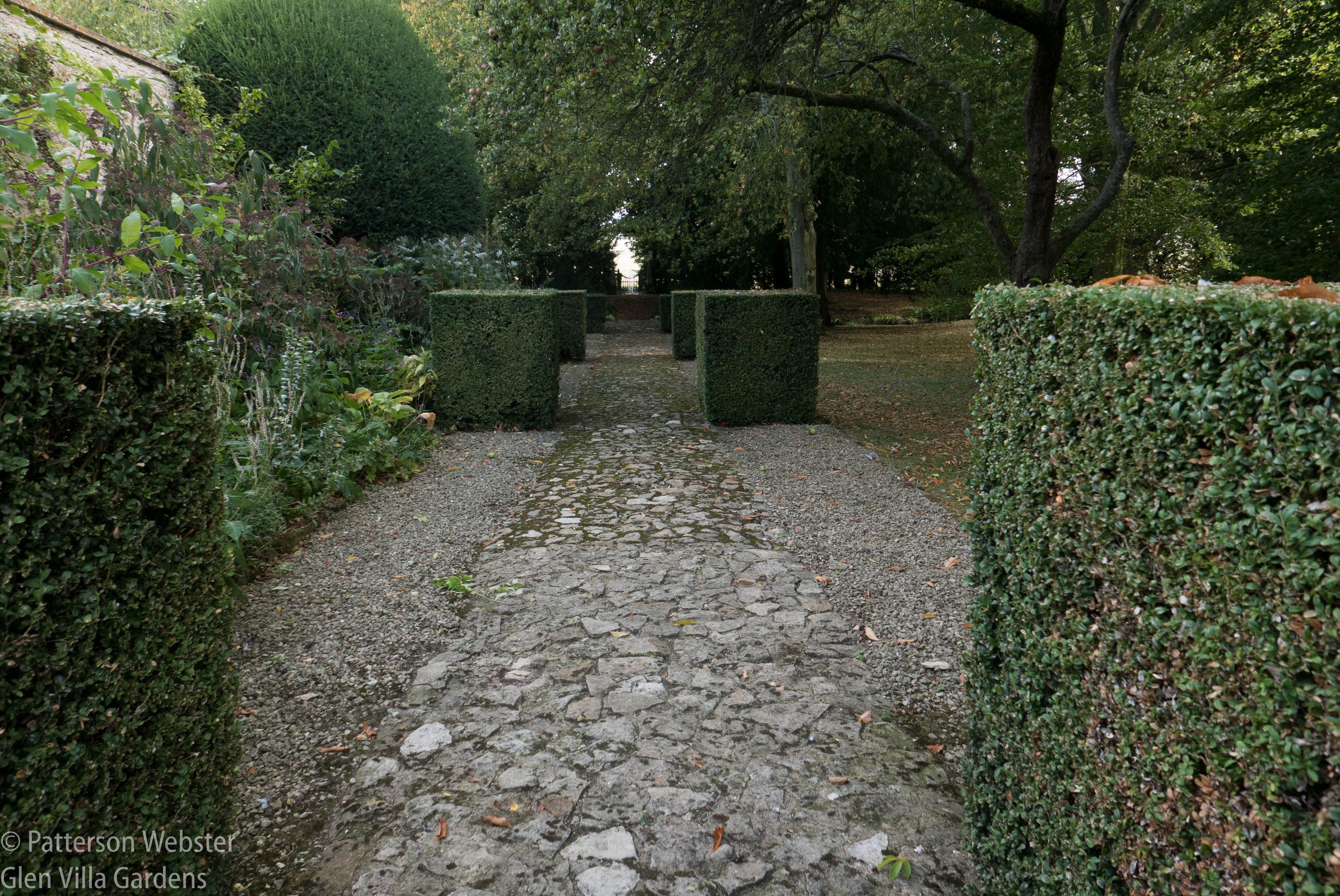 The clipped boxwood hedges at Haseley Court act almost like wings on a stage and the shade adds to the sense of mystery that this path suggests..

Paths are practical elements in a garden, minimizing the wear and tear that happens when people regularly follow the same route. While straight-cut stones that separate grass from a border create formality, they also suggest a practical approach to maintenance. 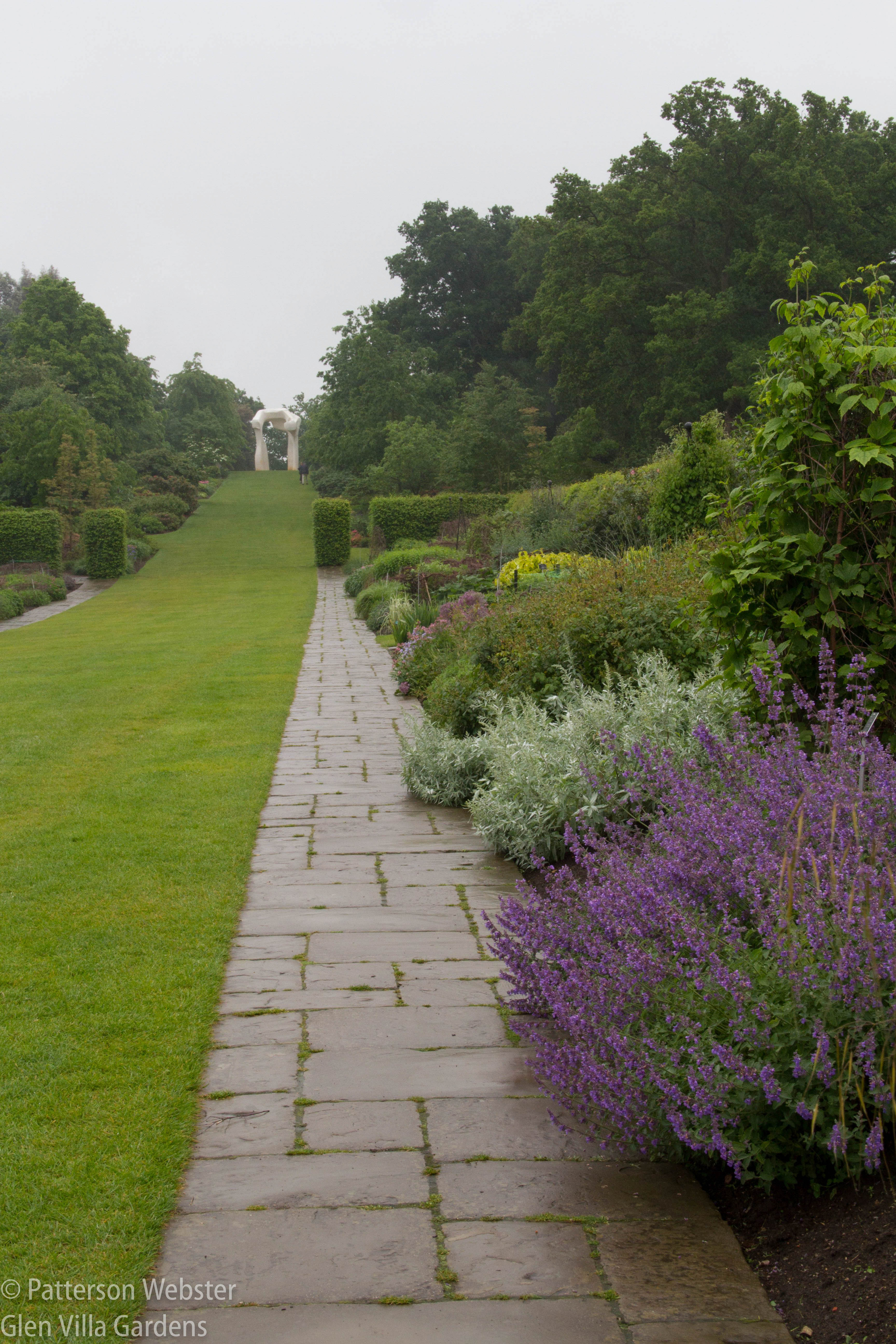 Borders edge grass on this long approach to a sculpture at the Royal Horticultural Society’s garden, Wisley.

Most stone paths are continuous but they don’t have to be. The round stepping stones below that direct your feet through this section of the garden at Rodmarton Manor lighten the formal design. 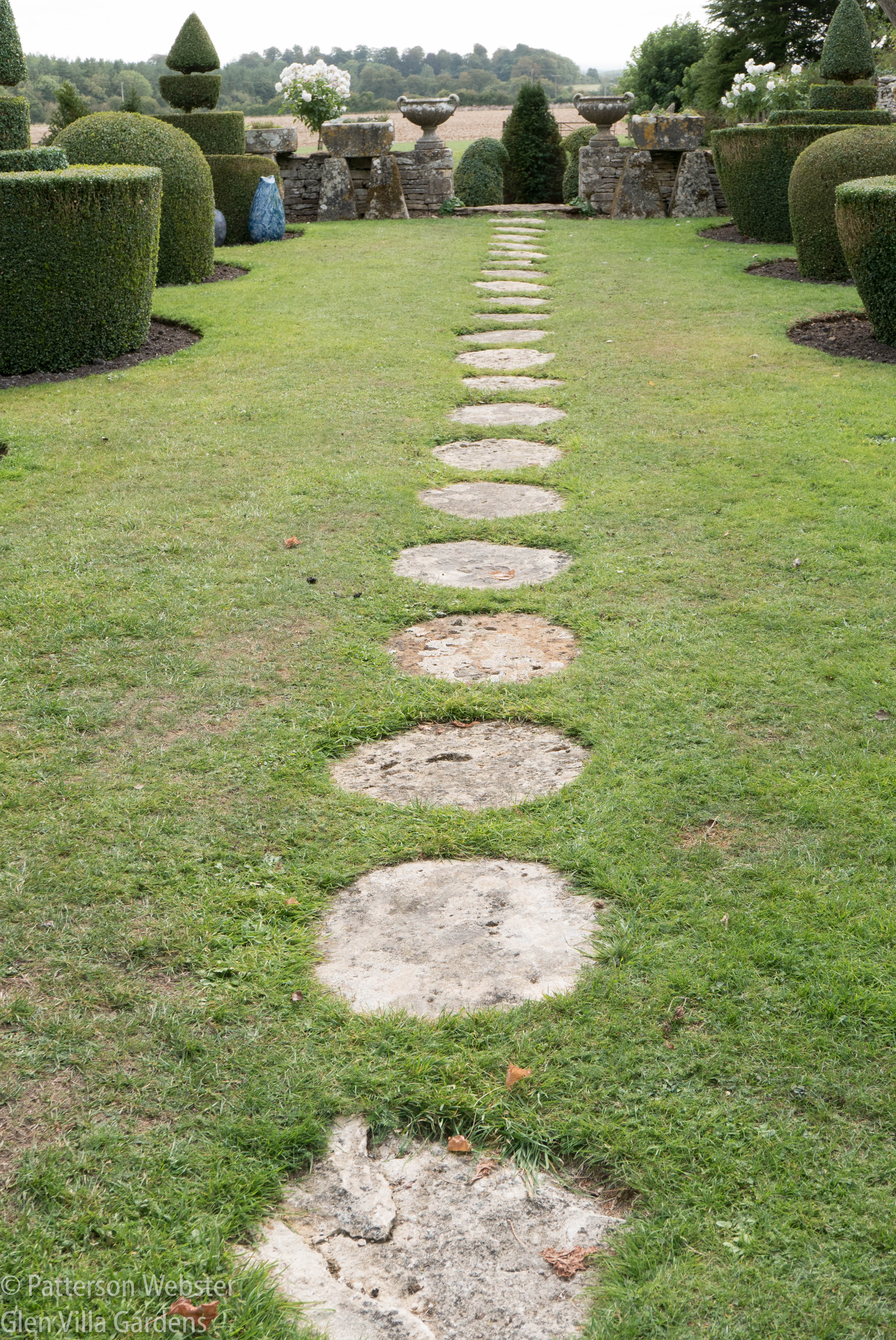 I like the way these round stepping stones combine with the round and square-edged shrubs on either side.

Not all paths work well. One I saw in a garden in France made me nervous. Was it safe to walk on the stones? Would they wobble or would I catch a heel in the gaps between the stones? 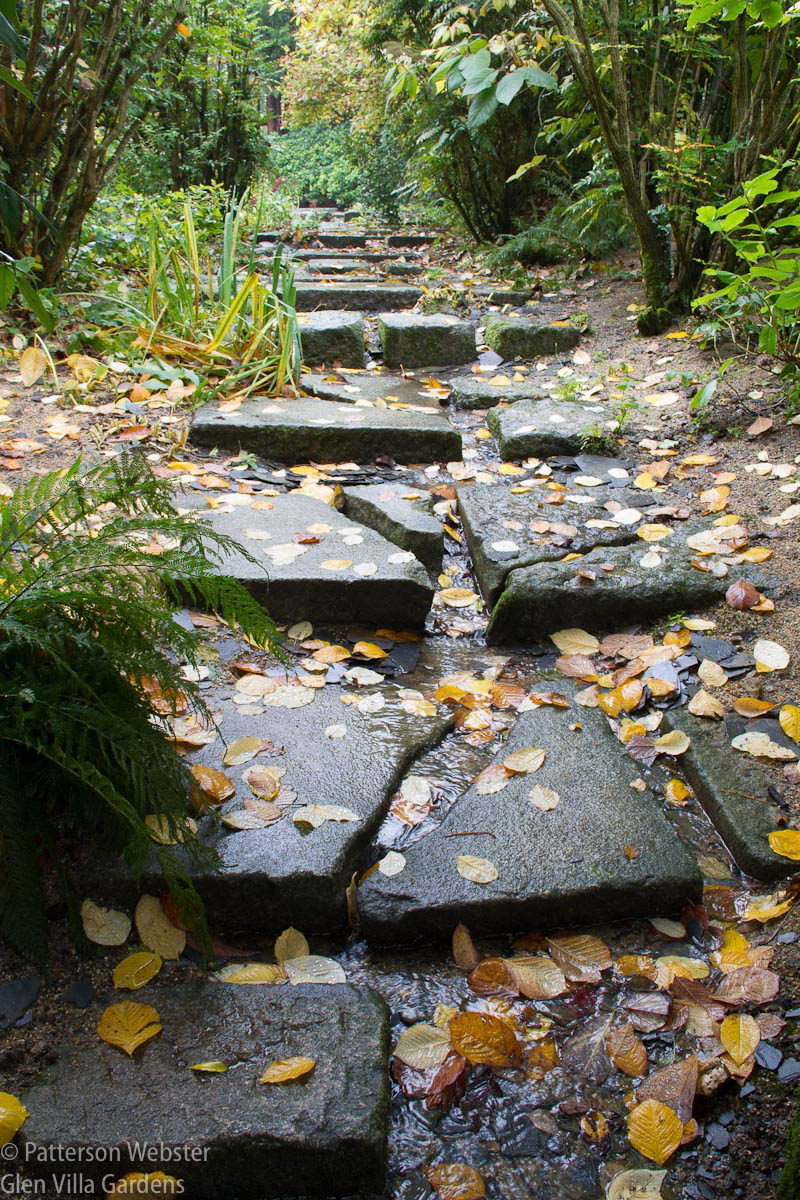 As I recall, a stream trickled down this stone path, making it even more treacherous.

A path at England’s Bury Court is mounded to allow water to run off, making it dry quickly. But more interesting to me is the design of the path. It is a straight line that becomes a curve to echo the curve of a hedge nearby and the transition from one to the other doesn’t curve but turns at right angles. I can’t remember seeing something like this in any other garden. Have you? 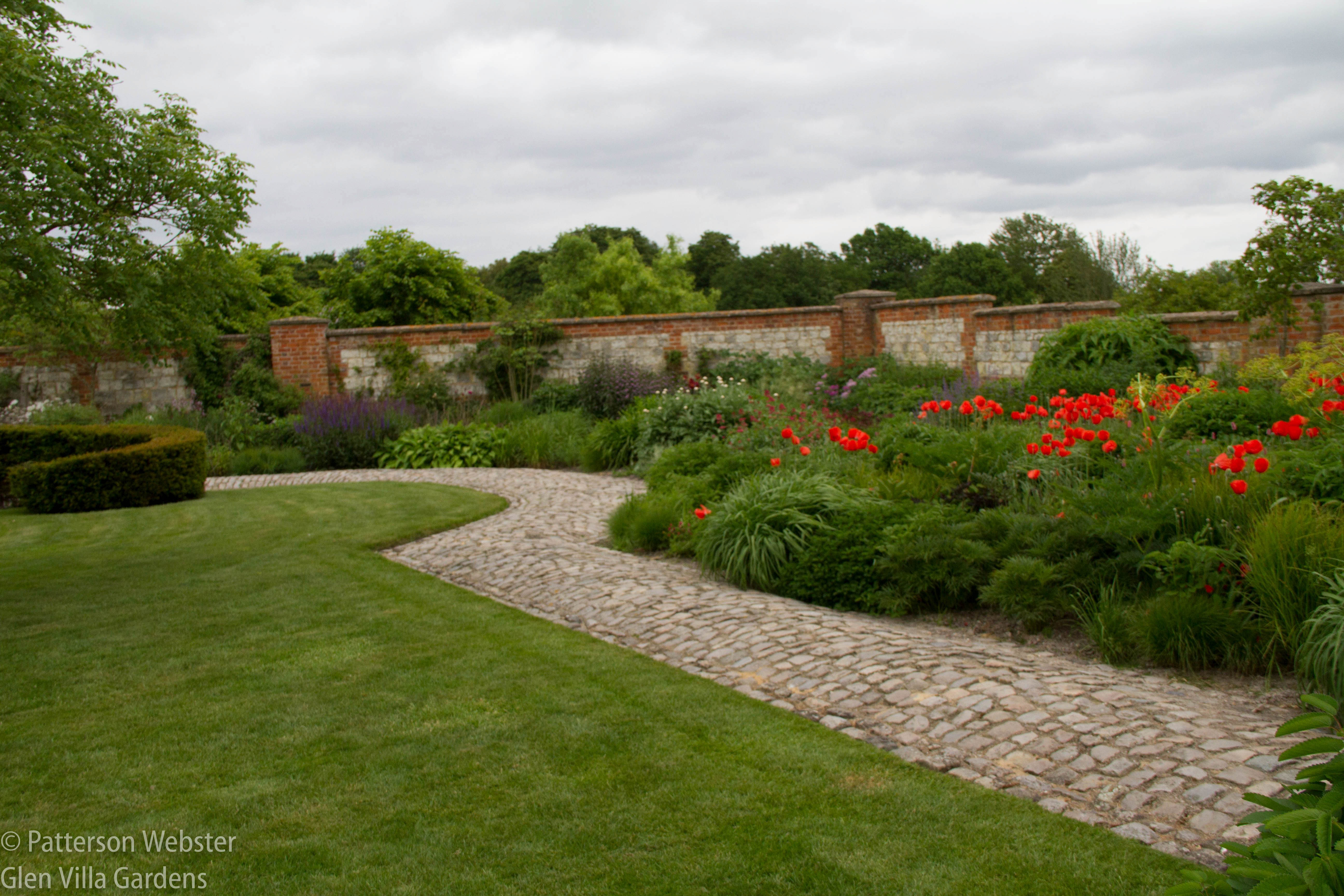 This path at Bury Court is made of local stone and echoes the stone used in the fence.

Stone paths can be expensive but not all are. And expense has little to do with beauty. What could be more gorgeous than this path made of stones set into moss? 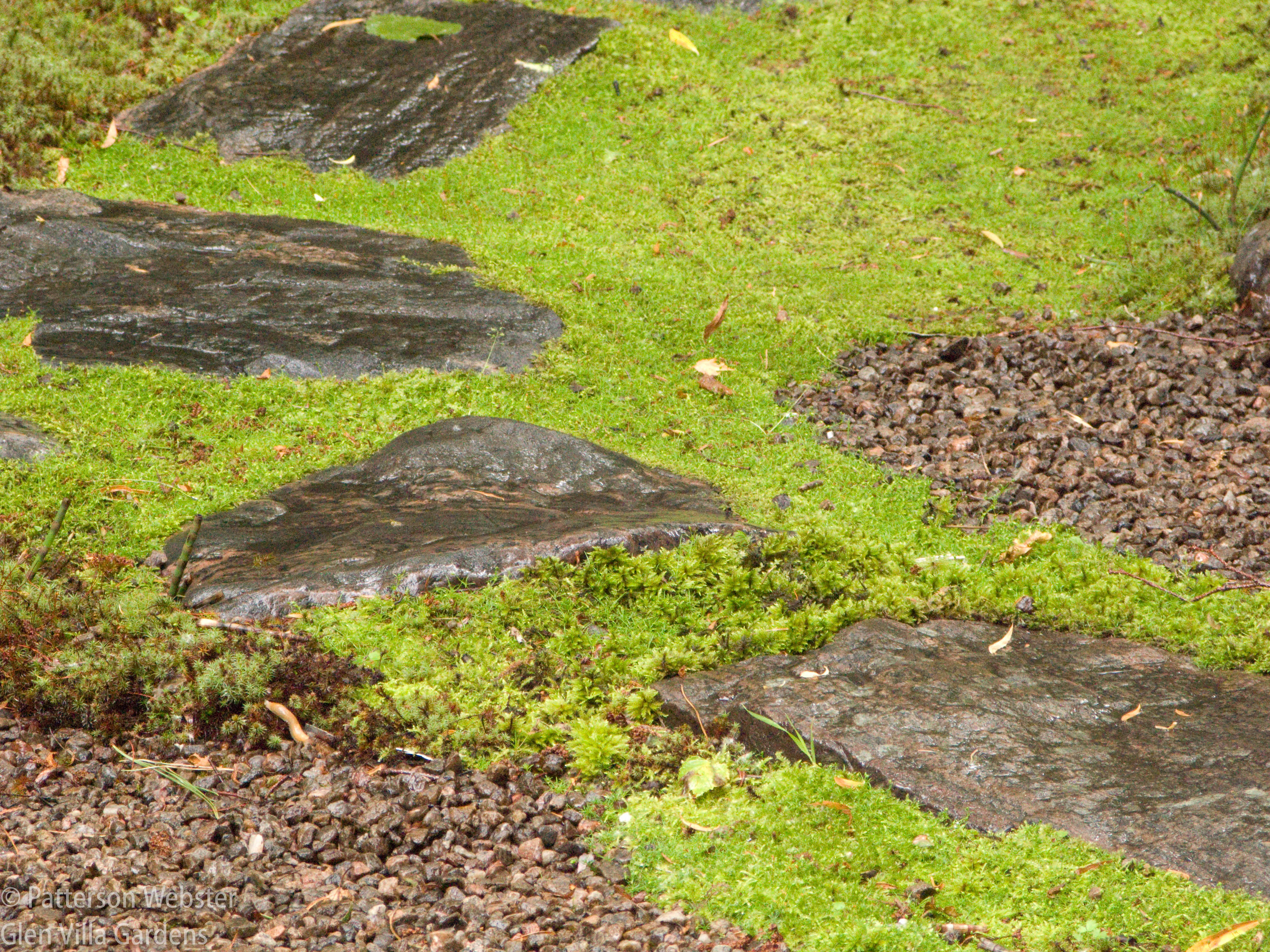 Stones in the Japanese garden at Les Quatre Vents in Malbaie, Quebec.

Do you use paths in your garden? What material are they made of, and how did you determine the design?

Ah, Pat, you speak to a topic I, too, have charted. Faced or cut stone is not readily available in this country as pavers (or is exorbitantly expensive) so often concrete pavers or bricks are used. I strongly advise against brick in our conditions – with our high humidity and high rainfall – it becomes like a slippery skating rink in a short space of time.
In our woodland areas, we leave all the leaf litter on the paths, just removing the branches and twigs. When we used to open the garden, we would go through the week before the busiest visitor time of year and put all that leaf litter through the mulcher before raking it out evenly. That gave the nicest path surface of all – springy, soft and very neat. But temporary – the next wind would bring down more leaves and needles.
I think colour is an interesting aspect too. We love the soft golden look of paths where the local gravel is coloured rather than our dull grey. We are going to try crushed limestone which we can get in a pale honey colour rather than stark white but we also worry about leaching from the limestone in an area where we have acid soils so grow acid-loving plants.
Regards,
Abbie

Colour is an aspect I hadn’t considered, Abbie, so I’m grateful to you for bringing it up. Because it is a very important element. Stone from the area of the garden always looks better to me than something that has come from a distance. But how I wish we had some of that lovely honey-coloured stone that is found so often in the Cotswolds. Our local stone is a blue-grey slate and very attractive but the dark colour isn’t suitable for every condition.

Seeing such different paths and materials was a real insight, Pat. The large sculpture at the Royal Horticultural Society, was it a Henry Moore?
Thank you for all the lovely walks we have had in your garden this July.
Mary Martha

Yes, it’s a Henry Moore. And this year, Wisley has an exhibition of contemporary sculpture that includes one of his largest pieces… I forget the name but it is VERY big and VERY fine. So glad you enjoyed the walks… so sorry we haven’t seen more of each other. It’s been a busy month.

Any stones set in moss is great!

I love paths so much that a garden without a path doesn’t really seem like a garden. If there’s nothing to explore, it’s just a big flower arrangement, a set piece. Do you think the path in France was done that way deliberately to make you really slow down? But you would only be looking at your feet, and not the garden! In my climate and yours, one consideration is whether the path will be used in the winter. If it is, snow must be easy to remove from the surface. If you shovel snow off a gravel path, you wind up shoveling the gravel off with it. The thyme growing between the stones of my front walk hinders easy shoveling, and some plants get uprooted every winter.

I agree, Kathy, paths are essential to a garden. As for the one in France, I think it was thoughtlessly designed, but I may be wrong. Winter conditions are significant in climates like ours. We put boards covered with burlap over the sections of gravel path we use regularly to keep the gravel where it belongs.

That treatment works for gravel paths but we have (or had) a gravel driveway; it came that way with the house. Not too much gravel left after 8 winters of snow blowing and plowing.

I understand — we have the same gravel driveway and the same problem of disappearing gravel.

We have 3 different paths made of 3 different materials. There is a path of irregular stepping stones leading to the back garden, a path of “brick” pavers in the back garden, and a grassy path (what’s left of the lawn) in the front. If I had the time/money, I would redo the side path with pavers. Then of course I would have to move the stones to make another path somewhere else!

Ah-h-h, the problems we face when we can’t bear to throw anything away, or even to admit that we may have made a mistake in the first place. I planted a reed in the Skating Pond that everyone warned me against. I doubt I will ever get rid of it. (Not that my comment has anything to do with paths, unless righteousness is mentioned.)