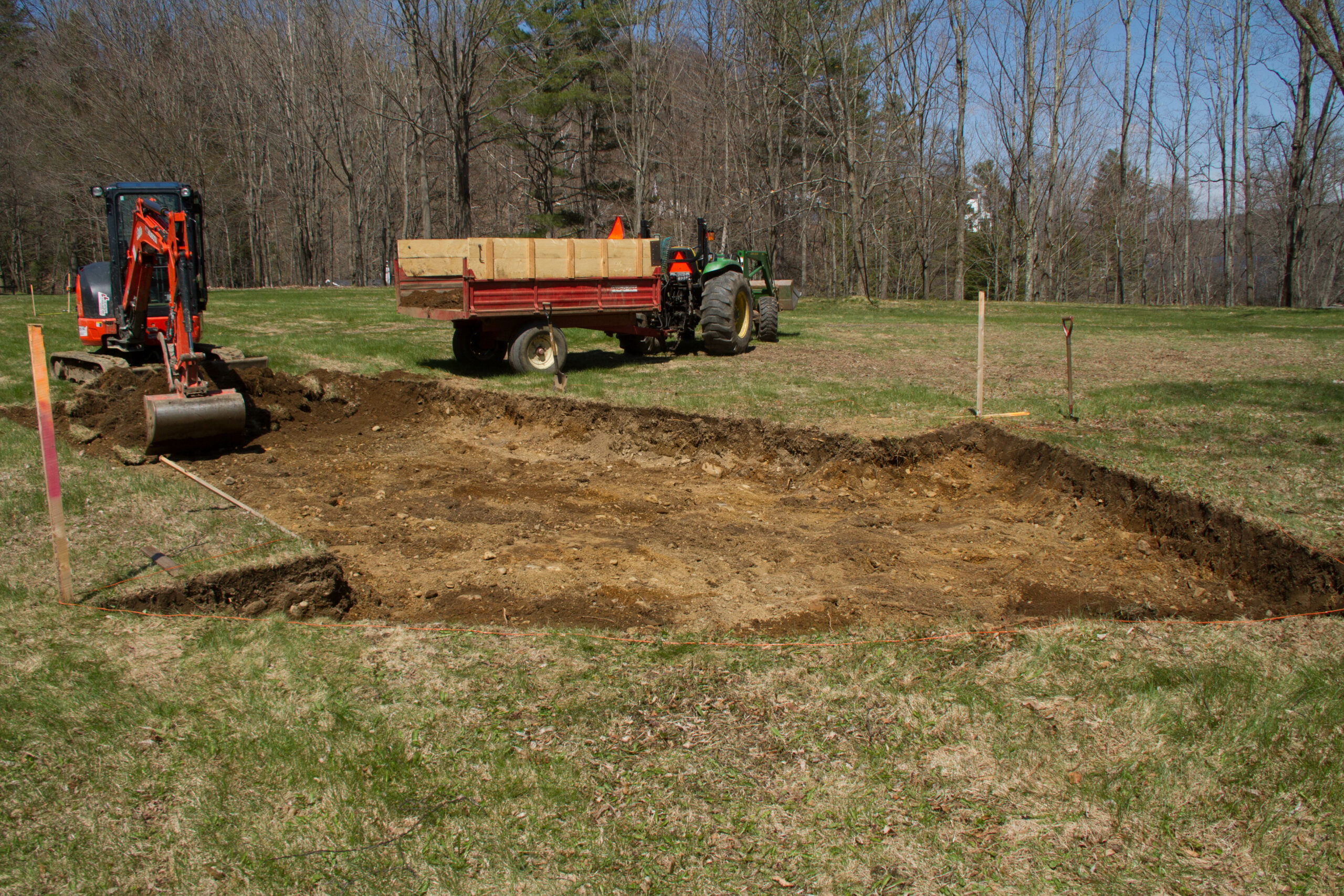 Last week I wrote about the genesis of the North South Arrow, the new area we are planting at Glen Villa, describing how the concept for the area changed over time. Today I’m writing about the plants I chose and how I decided to arrange them.

Jacques had warned me that the soil on site was a mix of sand and gravel that would need to be modified substantially if I wanted anything planted there to thrive. His advice was to dig up the top six inches and replace the impoverished dirt with good rich soil. At first I resisted, knowing that contemporary practice dictates that a gardener choose plants that match existing conditions rather than change the conditions themselves. But research suggested that doing that, I would end up with a selection of plants I didn’t really want. So, reluctantly, I took his advice.

In mid May we removed the top few inches of gravel and sand, creating the arrow shape I had settled on. 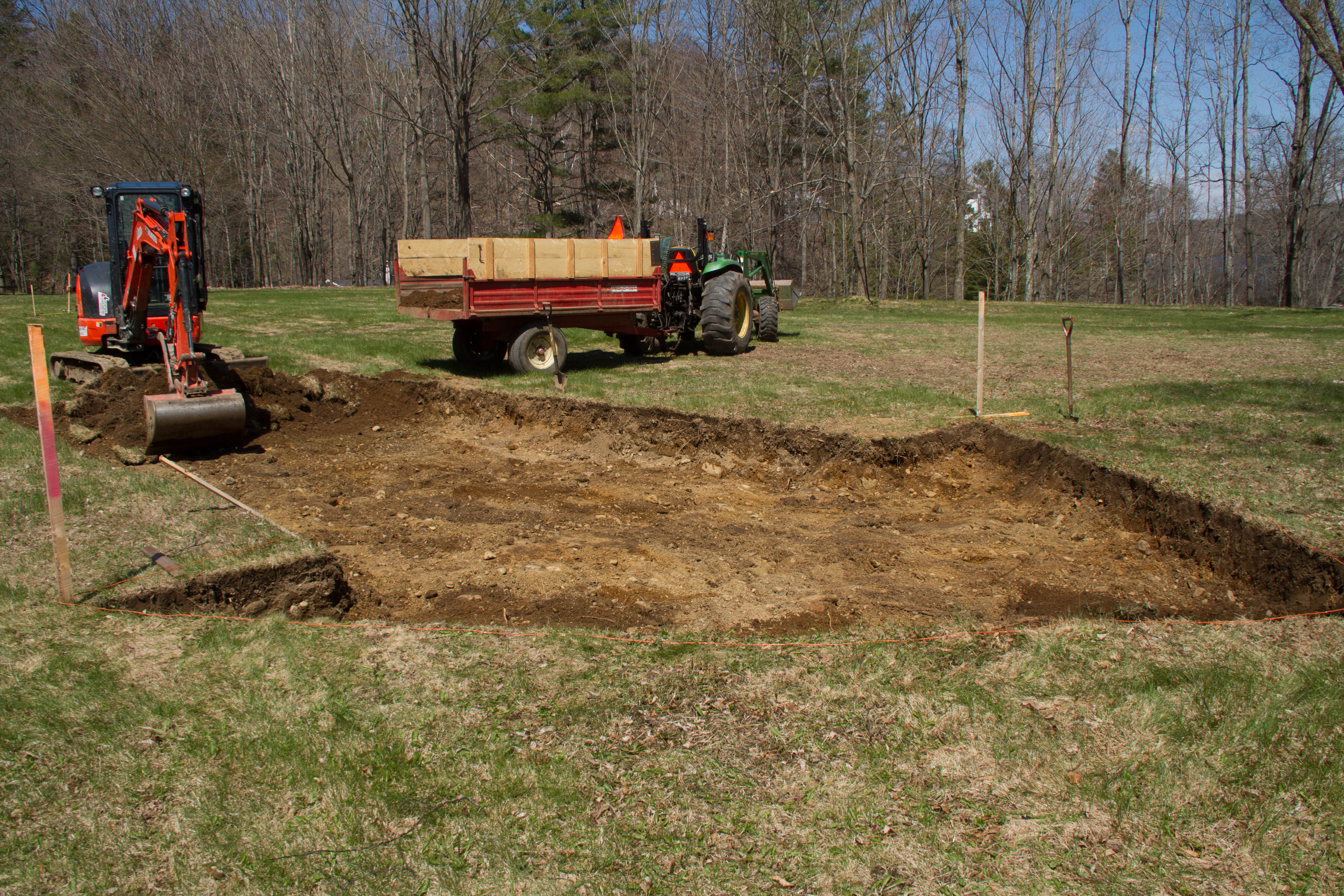 The colour of the soil gives you an idea of its quality — not great.

Then we added several truckloads of richer soil, using some of the huge supply that we took from the bottom of the pond we dredged a few years ago. 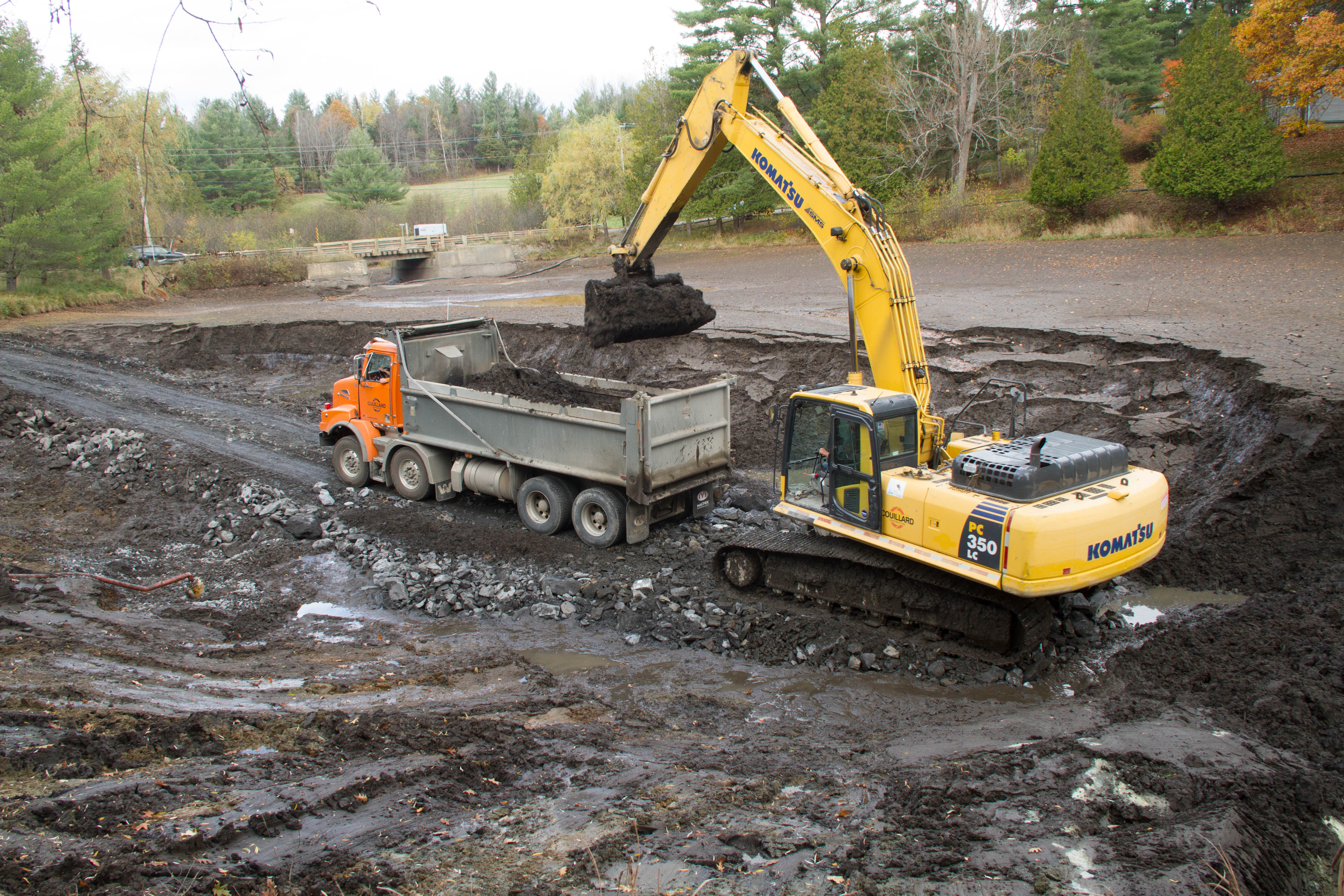 We dredged the pond in fall of 2017. I lost count of the number of truckloads of good soil that resulted.

While the bed was being prepared, I was finalizing my list of plants. Shrubs and ornamental grasses would dominate, I’d decided, with perennials playing a supporting role.

But how to arrange them? I sketched out a rough idea that seemed to work. 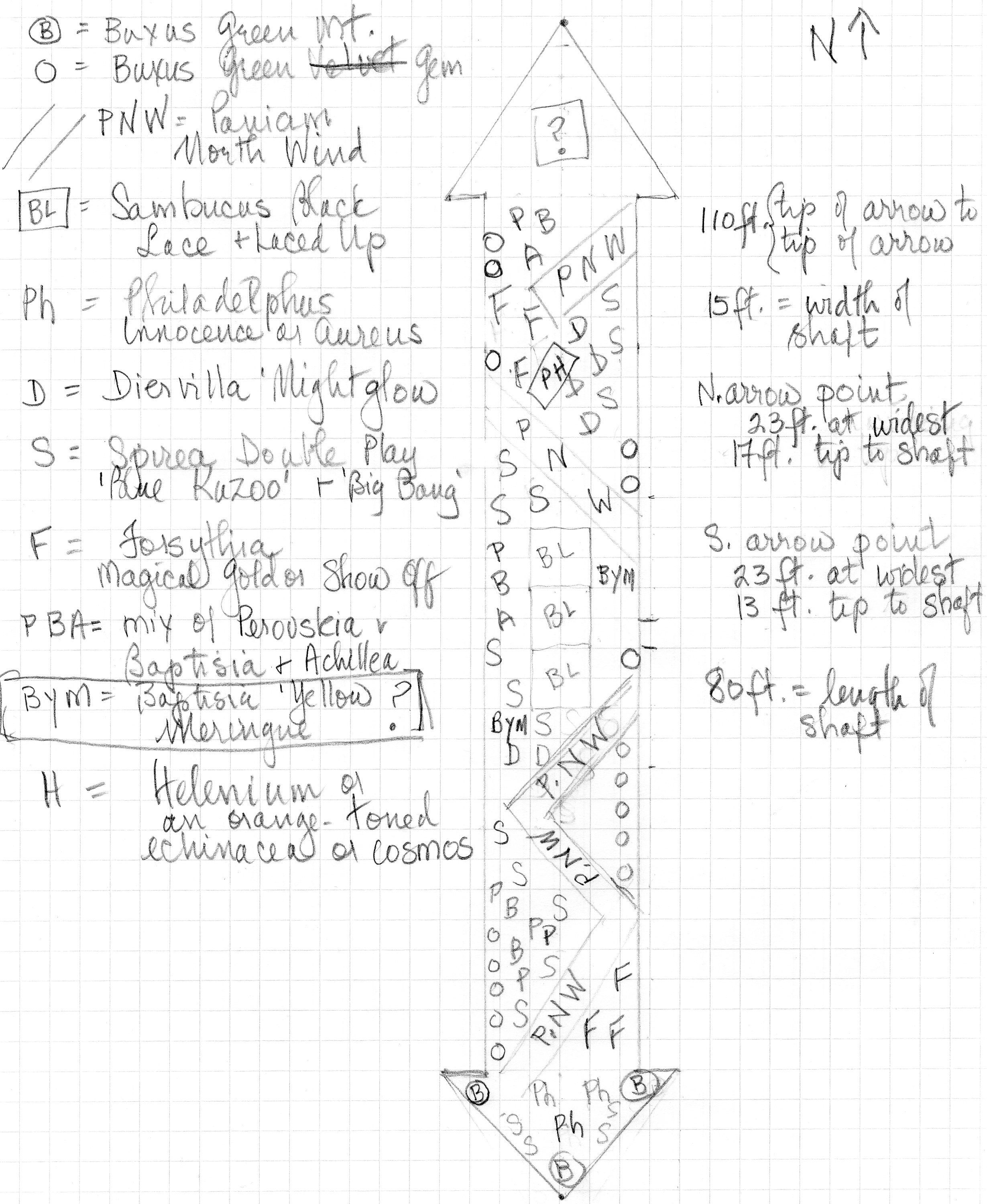 Panicum ‘Northwind’ was my choice for a plant to hold the garden together. Its name was appropriate and I liked its straight form and the touch of white along the blades that added brightness. I also liked the fact that it didn’t self seed and that clumps grew larger year by year, a practical consideration in terms of the number of plants I needed to buy. 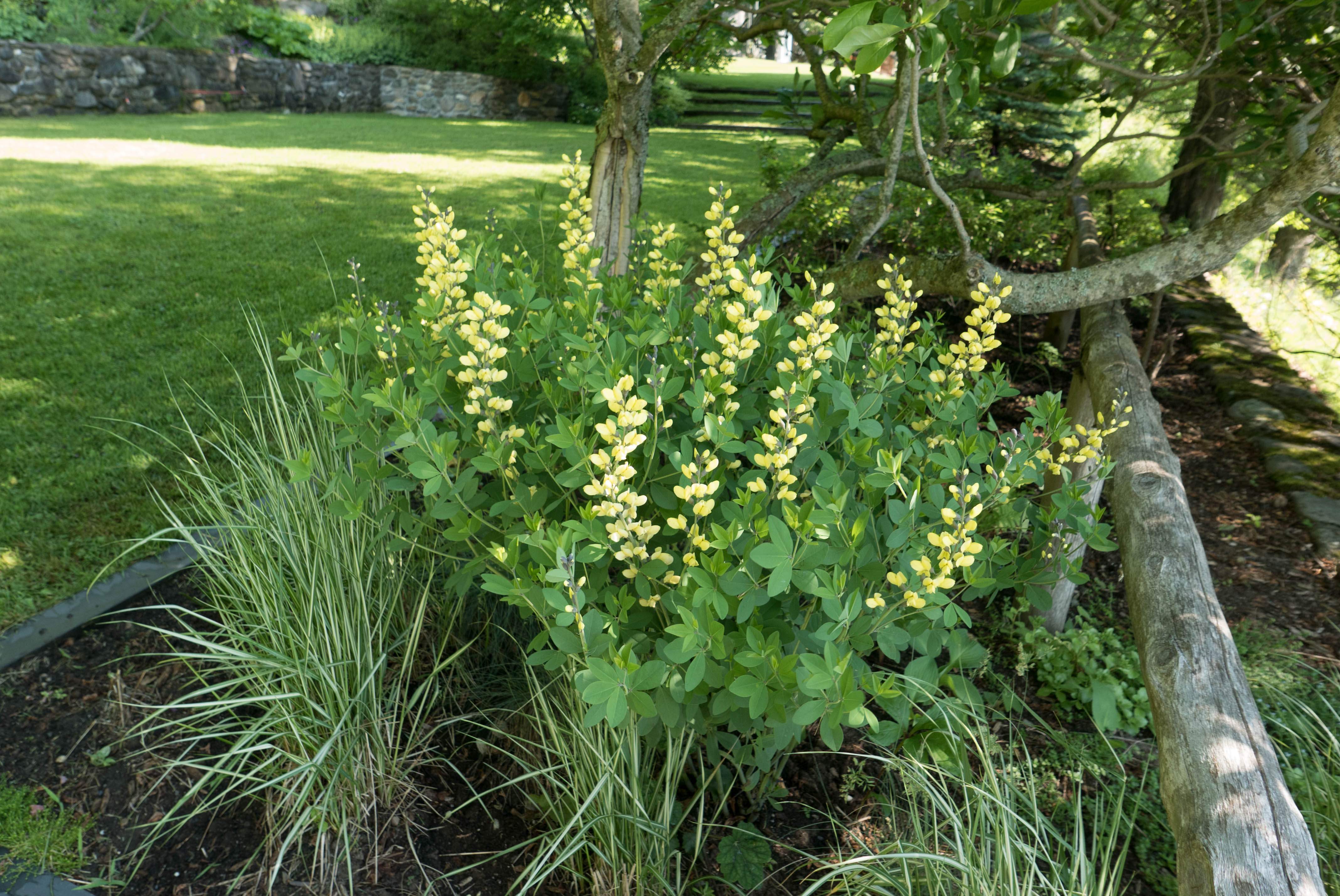 Several clumps of Panicum ‘Northwind’ are growing around Baptisia ‘Lemon Meringue’ in the Lower Garden.  A visiting group gave me the Panicum a few years ago and now I have more than half a dozen plants. I planted the Baptisia in 2017 as an experiment and I love how it has grown.

In my preliminary sketch I arranged P. ‘Northwind’ in a  narrow line like the railroad tracks that zigged and zagged from the south to the north bringing southerners to stay at Glen Villa. I left the north arrowhead blank at first but eventually settled on one of the ornamental grasses on my list, Miscanthus ‘Flamingo.’ My friend Myke Hodgins, the Montreal landscape architect, suggested I edge the arrowhead with boxwood, but I decided instead to use the Artemisia ‘Silver Mound’ that was growing nearby, on the ‘light’ side of the Yin Yang. 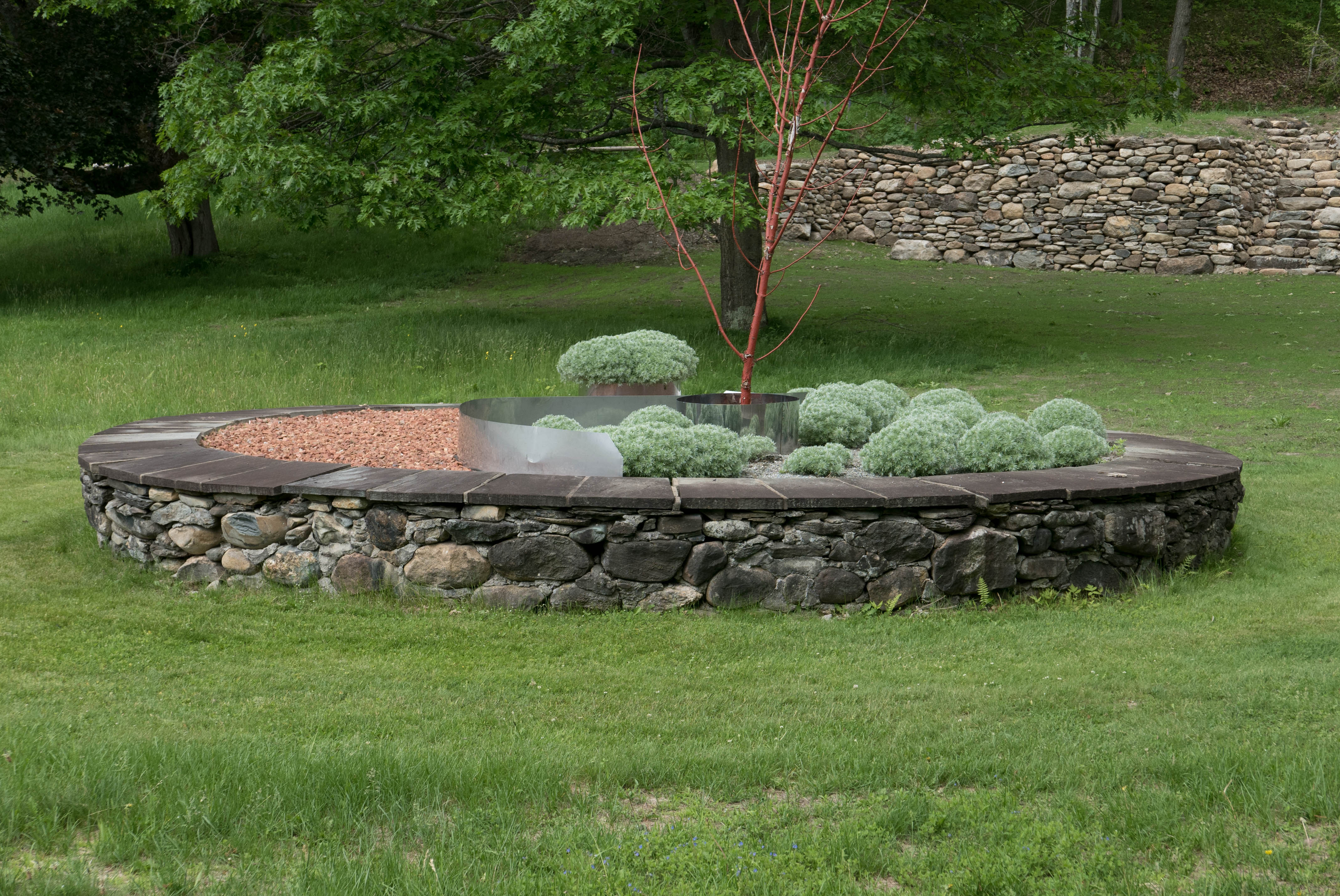 I sent my rough sketch off to Myke and  his firm HETA to determine how many plants of each type I needed to order. (Yes, knowing the dimensions I could have figured this out for myself. But what are friends for if not to simplify a job?) And back came a colour-coded planting plan, complete with the numbers of each I needed. 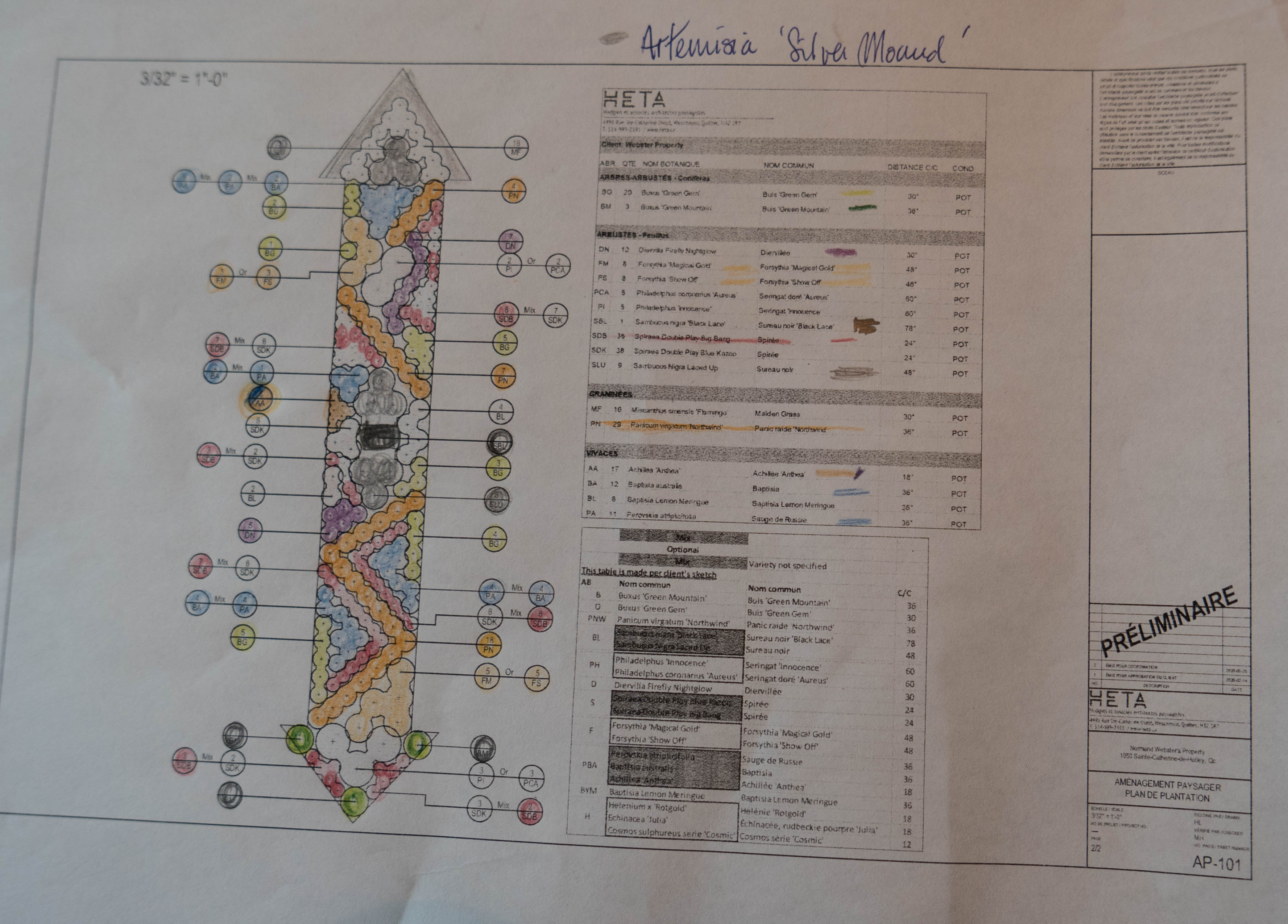 Instead of the beautiful version prepared by HETA, I attach the version I coloured in to help guide the planting.

A few days later I headed out to a big local nursery with my list in hand, only to discover that many of the plants listed on their website were not available. Speaking to other gardeners, this seems to be standard this year. It’s understandable: at the time that plants were being ordered and brought in to Quebec nurseries, government regulations due to COVID-19 weren’t clear, meaning that a nursery didn’t know when it could re-open or even if it would be able to. Thankfully, though, many plants were available and a week or so after I placed my order, a truckload was delivered. 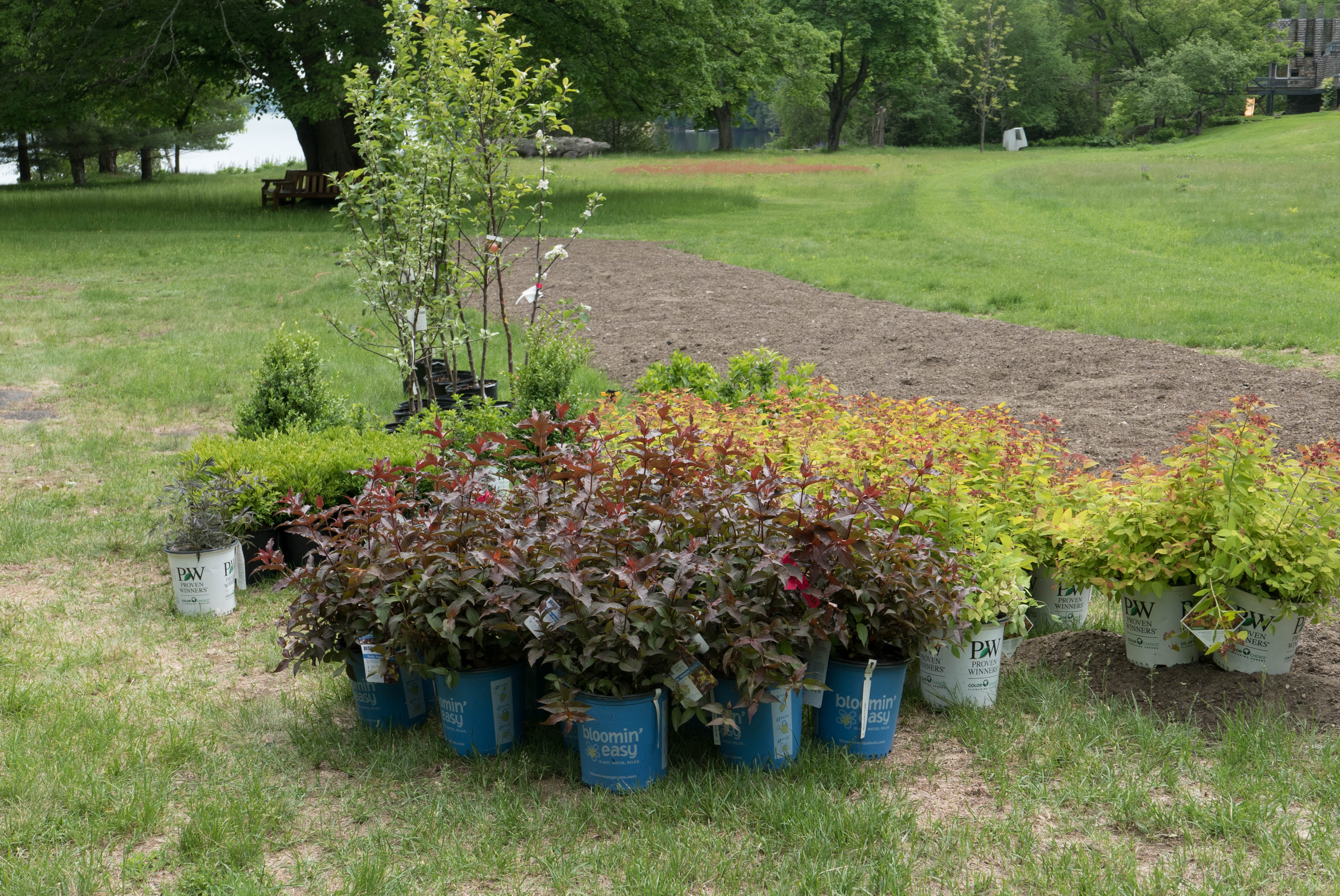 A few day later, we placed the plants, leaving gaps for plants that are still to come. 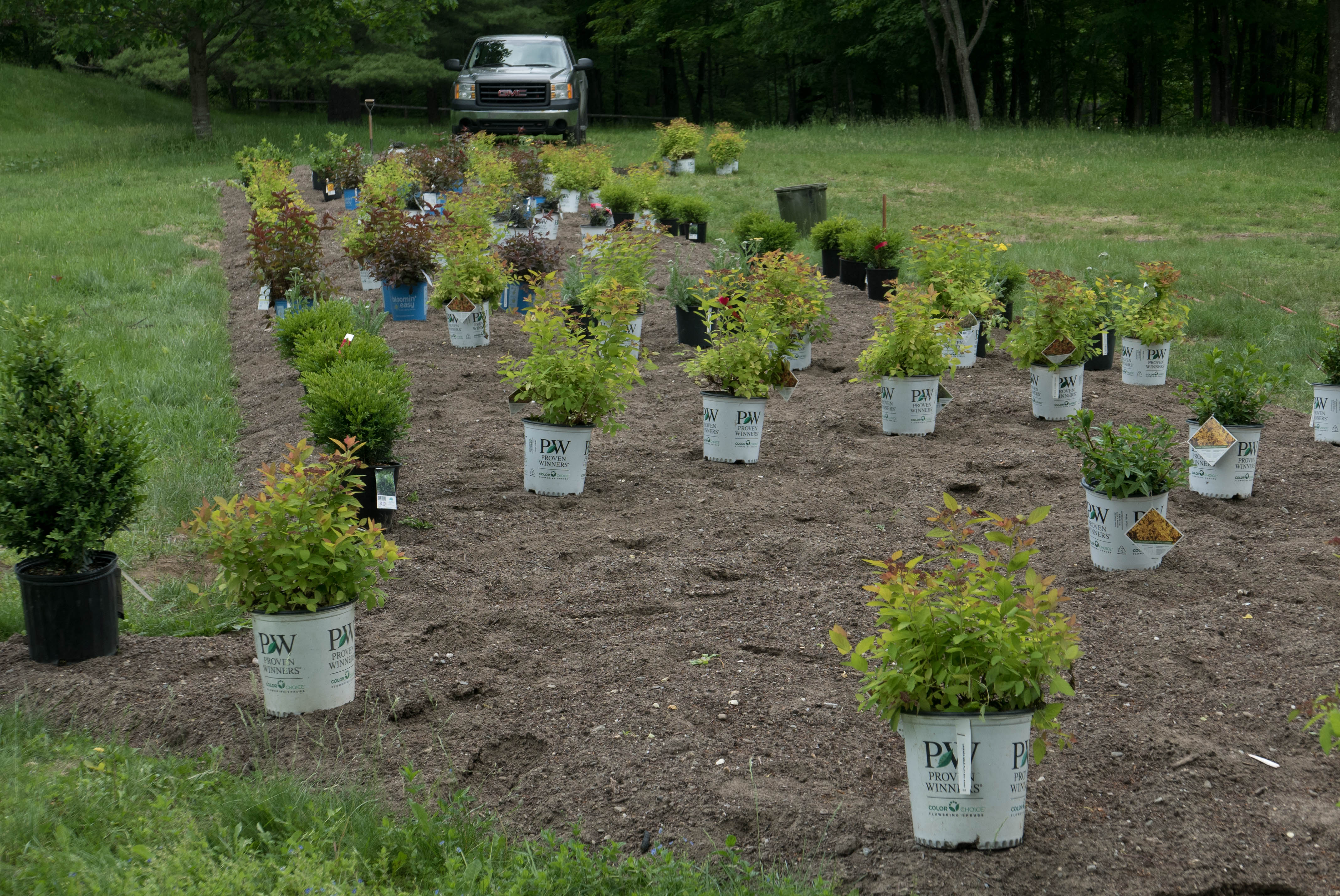 Today, the North South Arrow is very much a work in progress. This state of affairs may last for a while since I have not yet located all of the plants on my list. But for now, I’m pleased. The first night that the plants  were in the ground, deer nibbled the flowers off one of the shrubs (appropriately named Diervilla) but they must not have liked the taste for they have left them alone ever since. 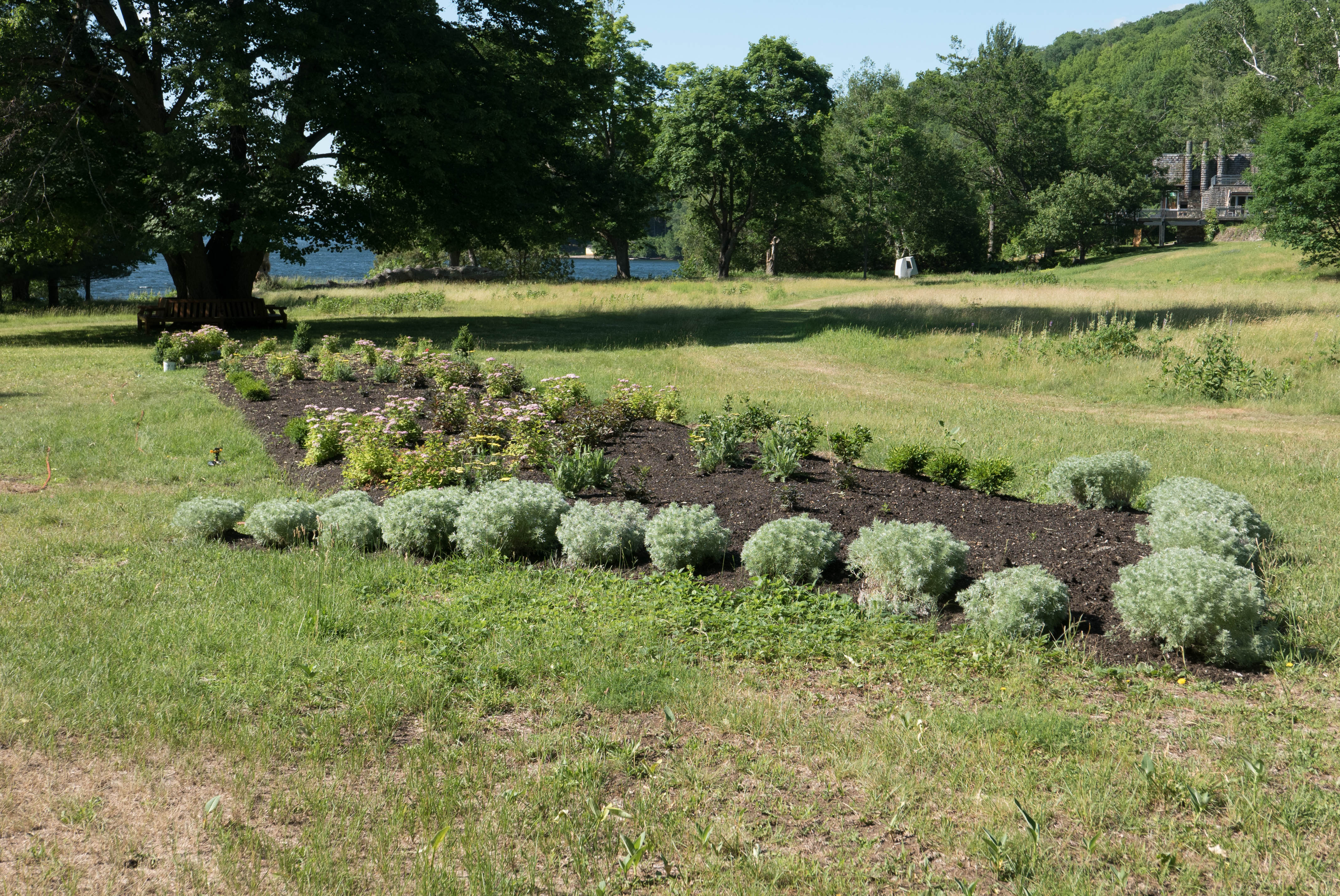 The bare spots show how many more plants are still to come.

There was more than enough Artemisia to edge the arrowhead. Now, with most of it gone, the Yin Yang looks empty. That’s okay with me — it’s time to rethink the design.  It helps that I have an idea, one that relates to directions and how they are shown on maps.  Any guesses? 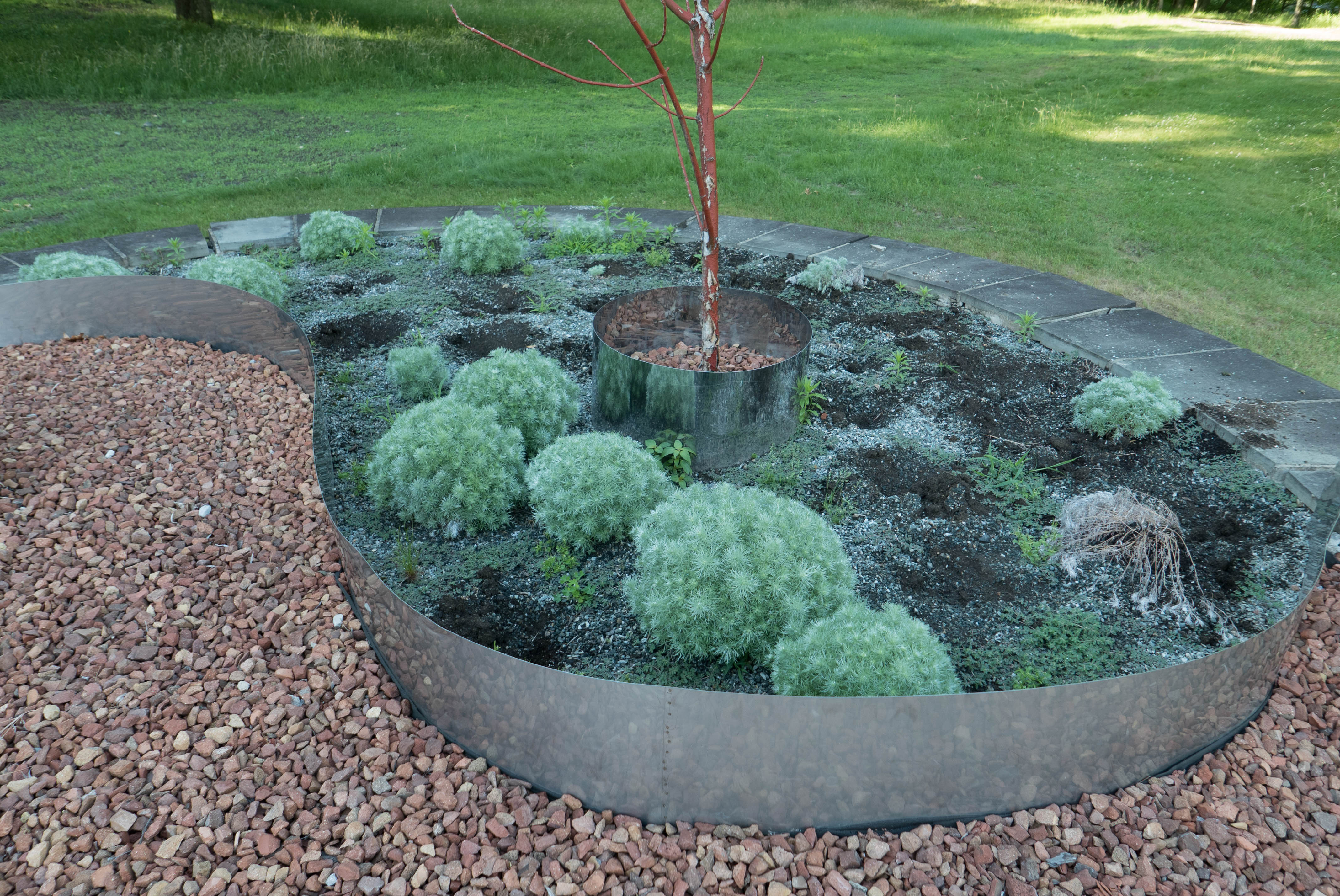 I’m not sure where or how I will use the remaining Artemisia but I will find a spot somewhere.

Changing the Yin Yang isn’t the only project in the works. Preparing the bed for planting, we had to remove a large rock that was in the way. And when I say ‘large’ I mean it. On end, it rears up more than six feet, with a shape that is ideal for a use I have in mind. 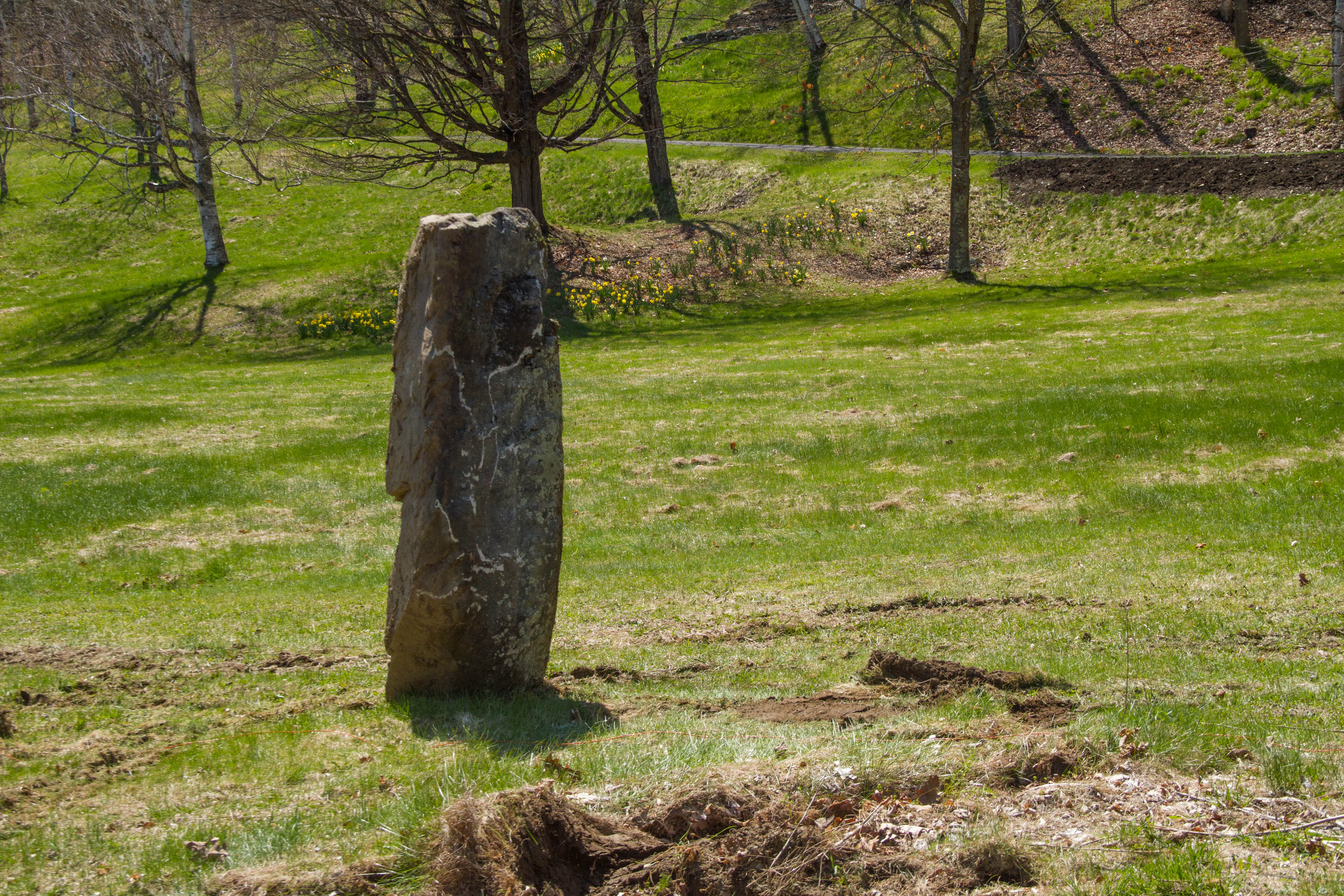 Because I definitely have plans it. It will be another month or two before it is installed in its new home, but once it is, I’ll happily tell you all about it.