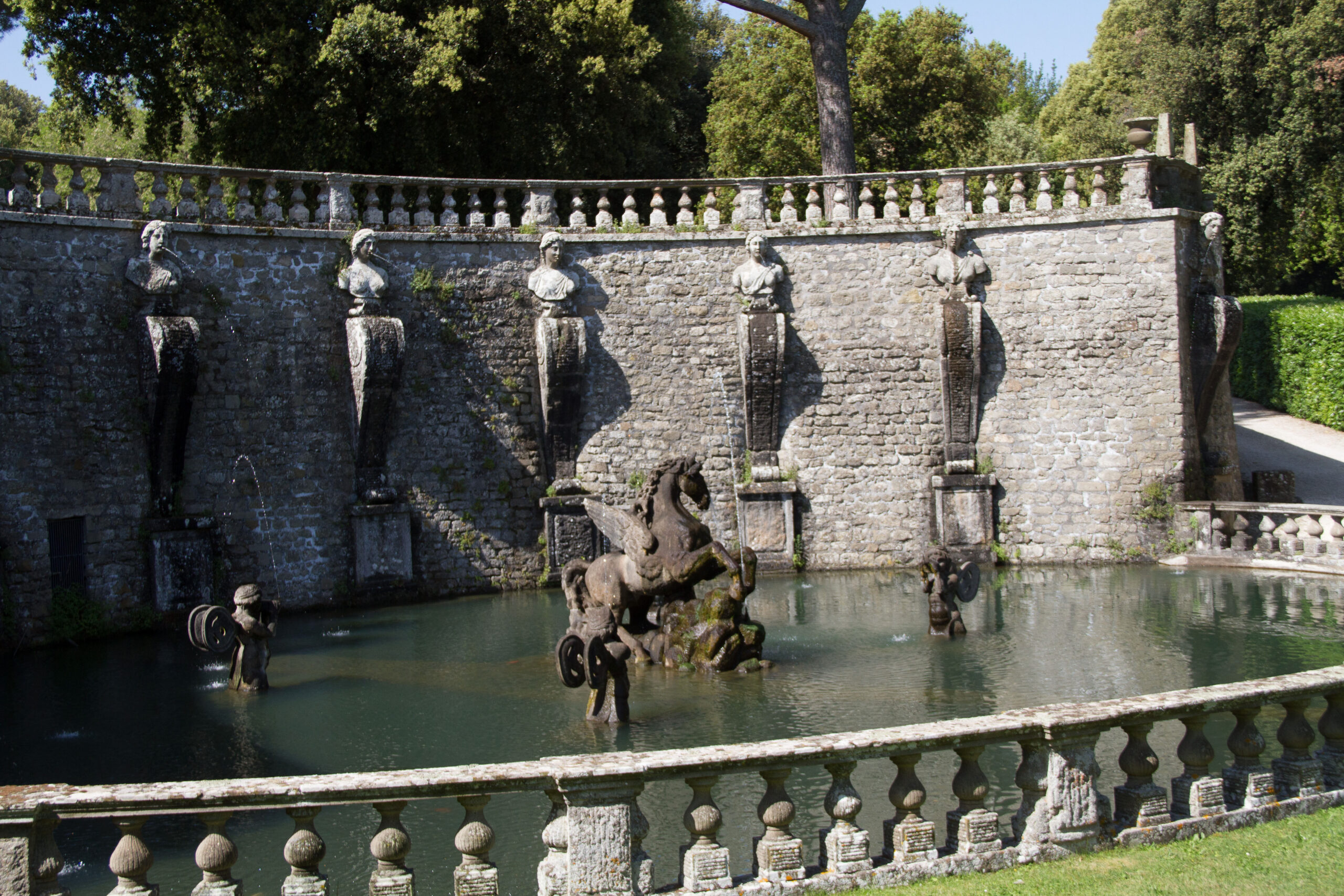 Yesterday I gave an on-line talk about Glen Villa to a group of well-informed, well-educated women, many of whom attended the same single sex college I attended years ago. (What used to be Randolph-Macon Woman’s College in Lynchburg, Virginia is now the co-ed Randolph College.) In the question period afterwards someone asked if I had a favourite garden. It took me only a moment to respond. Not one, I said, but several.

I named four or five gardens, and today as I think back, I am struck by  how different those gardens are yet how closely they are linked by a single concept. Each tells a story, and each uses history and allusion to ideas outside the garden itself to make the story understandable.  This is something I’m doing at Glen Villa, in the garden and as part of Timelines, the trail through fields and forests that explores ideas about history, memory and our relationship to the land, and this may well explain why I like the gardens as much as I do.

Today I began to re-live my visits to those gardens. In a series of posts, I plan to look more carefully at each of my favourites, starting with the oldest, the Italian garden Villa Lante. 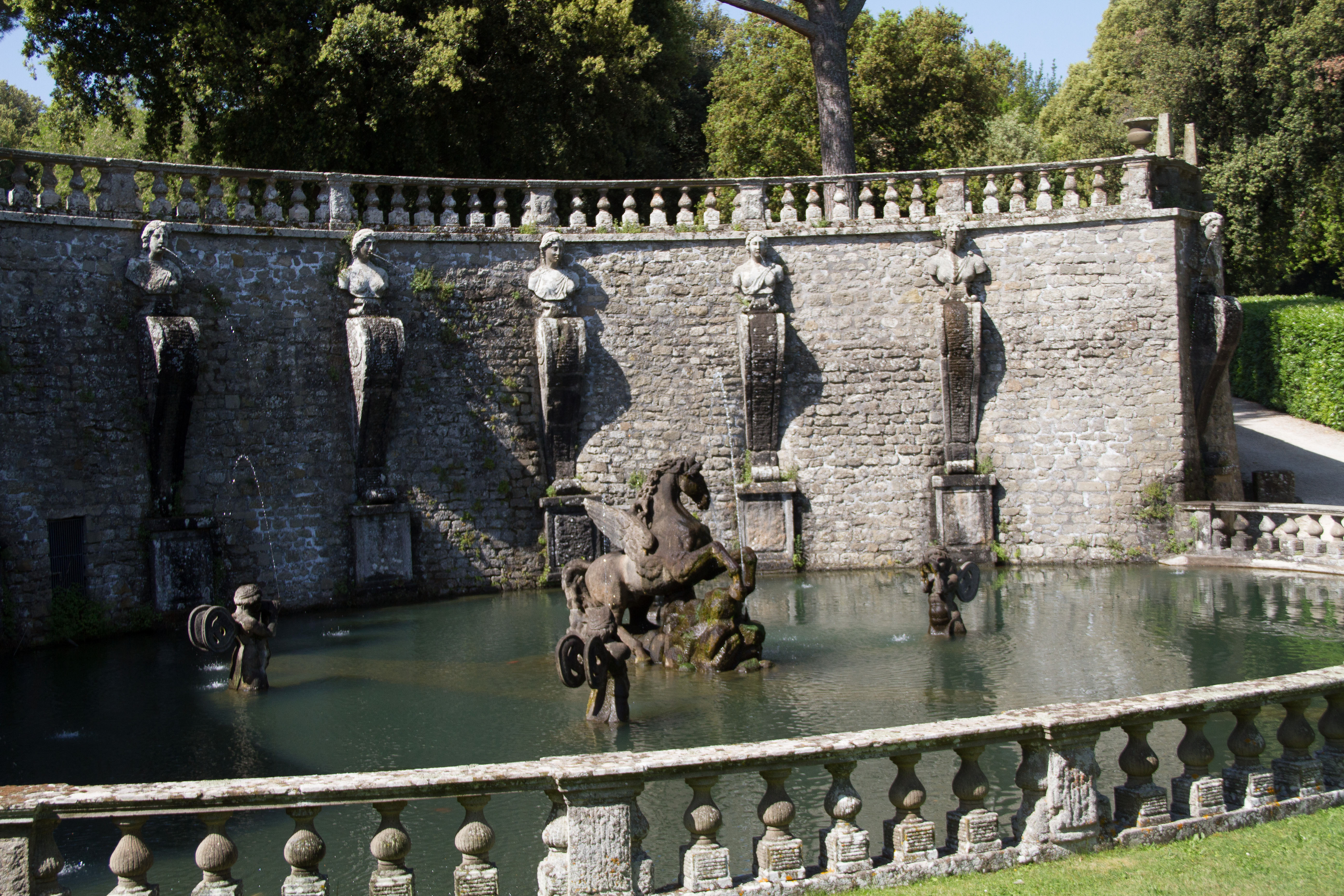 This fountain of Pegasus surrounded by the nine muses stands near the entry to today’s garden, in a wooded area that once was integral to the garden’s story.

Villa Lante was built in the mid 1500s by the famous Italian architect Vignola for an important man, the Cardinal Gambara.  It is a very sophisticated garden that tells a story about the relationship between art and nature, showing how humans were transformed from a ‘primitive’ existence in the Golden Age to the ‘civilized’ society that the Cardinal was part of. And with extraordinary versatility, Vignola tells this story through the use of water.

The garden, located on the side of a hill in the province of Viterbo, is divided into three terraced levels. At the highest of the three, water enters the garden as a destructive, chaotic force. As it moves down the hill, it becomes channeled and controlled, tamed as it were by the power of art. 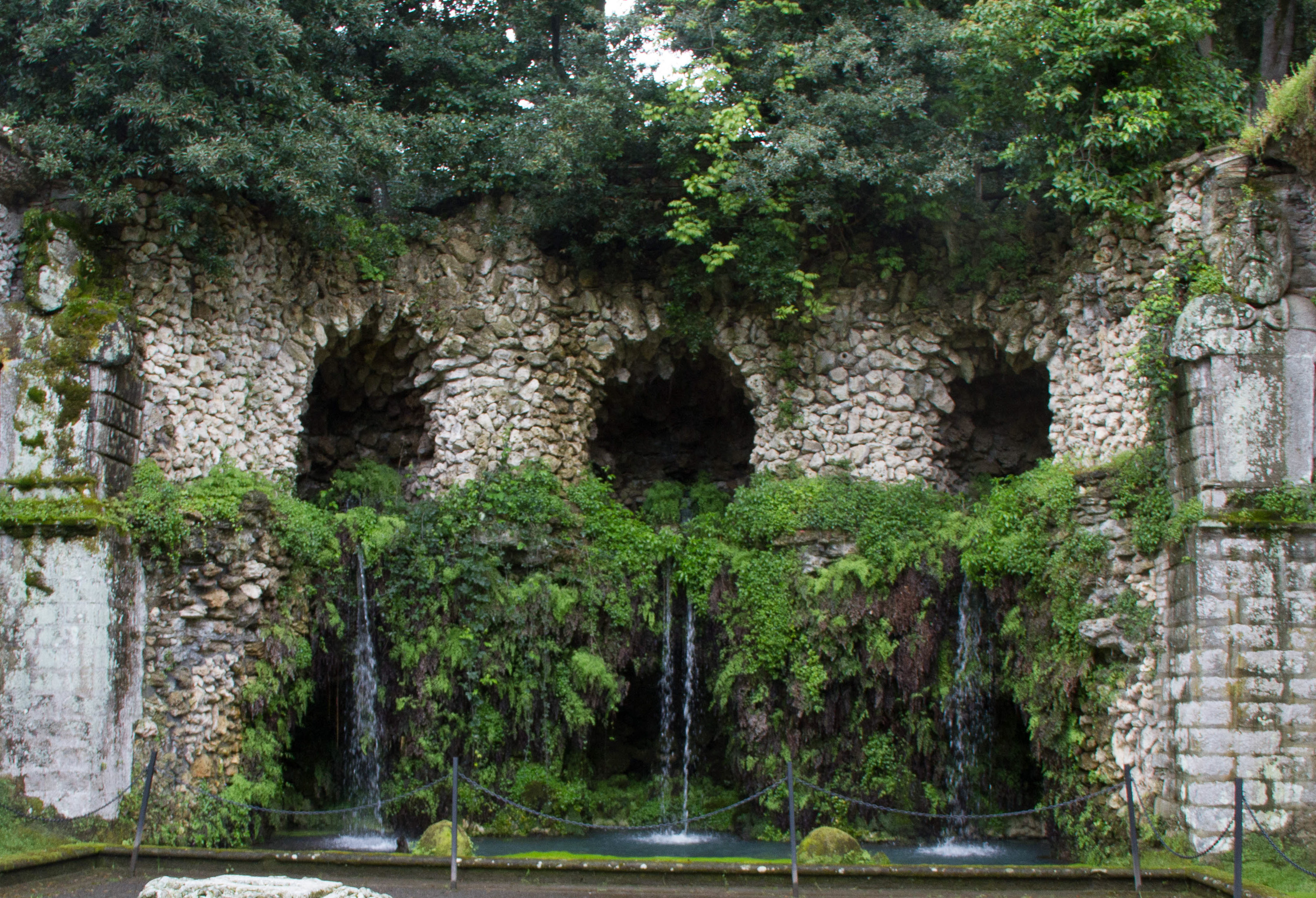 The rough tufa wall and the informal vegetation provide a strong contrast to the more refined fountains and formal arrangement of plants that will follow.

The power of the Cardinal himself is glorified throughout. As water moves from the top-most to the middle terrace, it passes through a channel edged by scalloped shells, each slightly different. 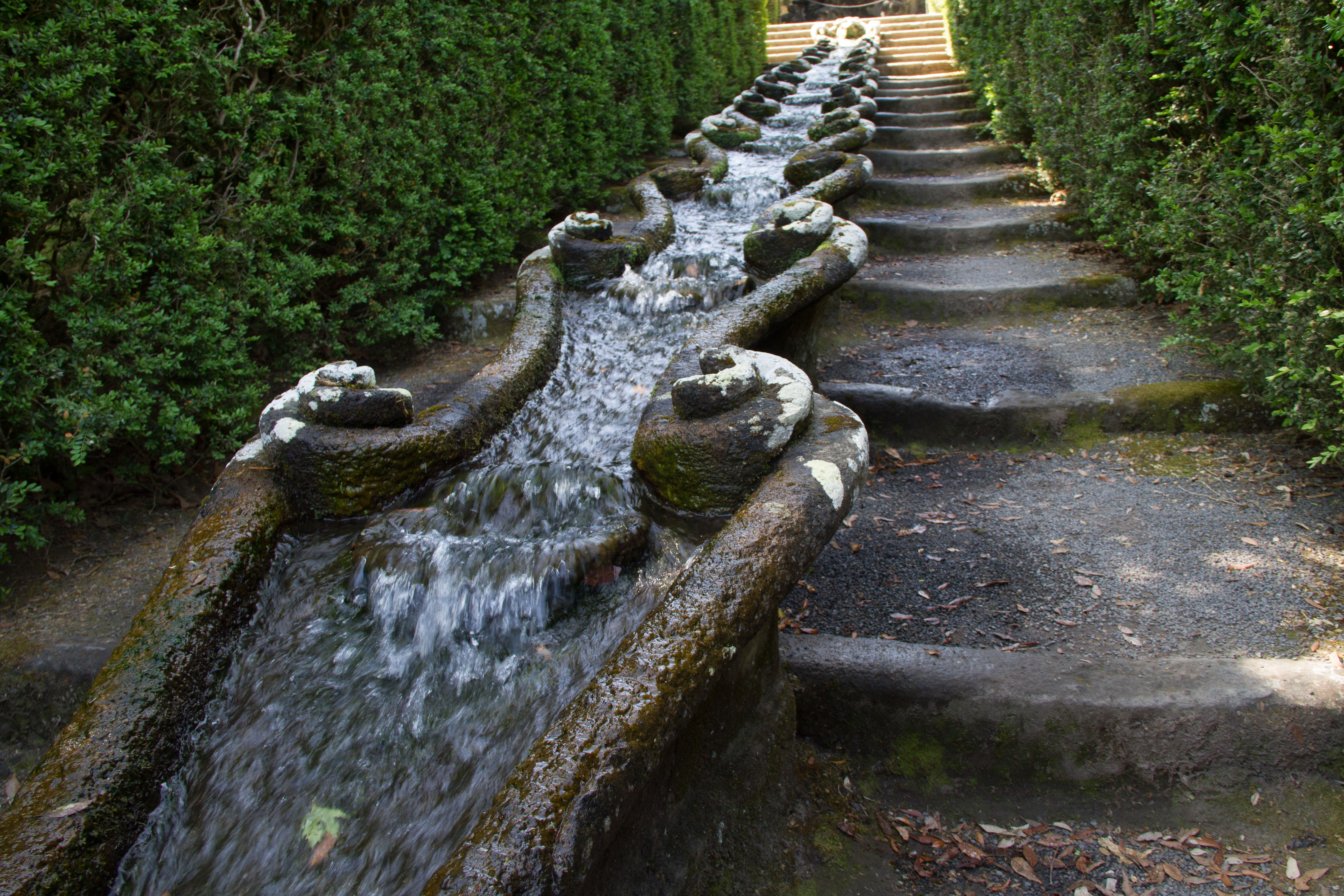 A giant lobster or crayfish head at top of the chain and over-sized claws at the bottom make a pun on the Cardinal’s name, Gambara, the Italian word for crayfish. 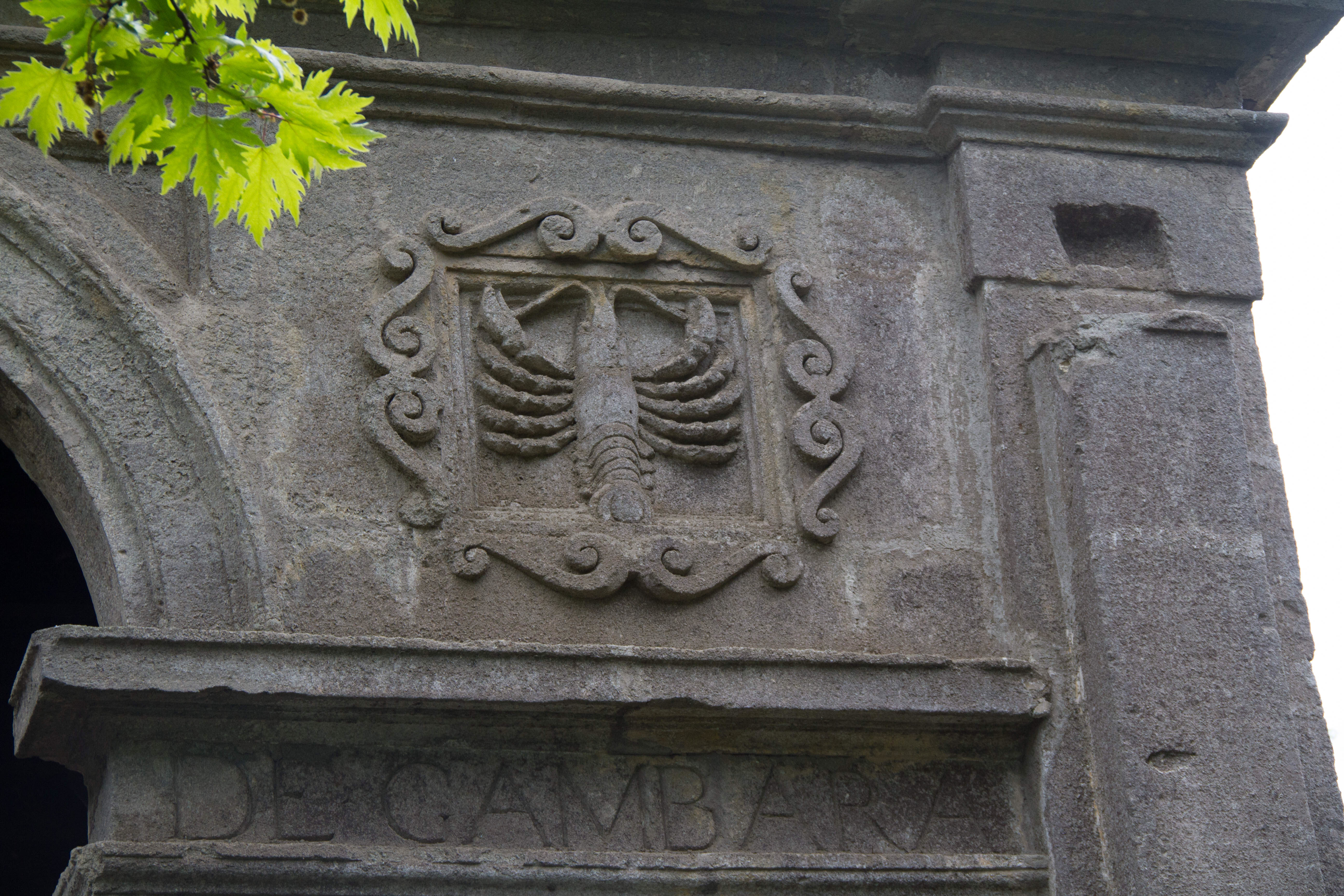 The crayfish symbol appears throughout the garden.

Water falls from this scalloped chain into the Fountain of the River Gods, two recumbent figures representing the rivers Arno and Tiber. These are the rivers that water the Cardinal’s property, and its abundance in the fountain is a metaphor for the fertility of the land – and for the Cardinal’s generosity as landowner and governor. 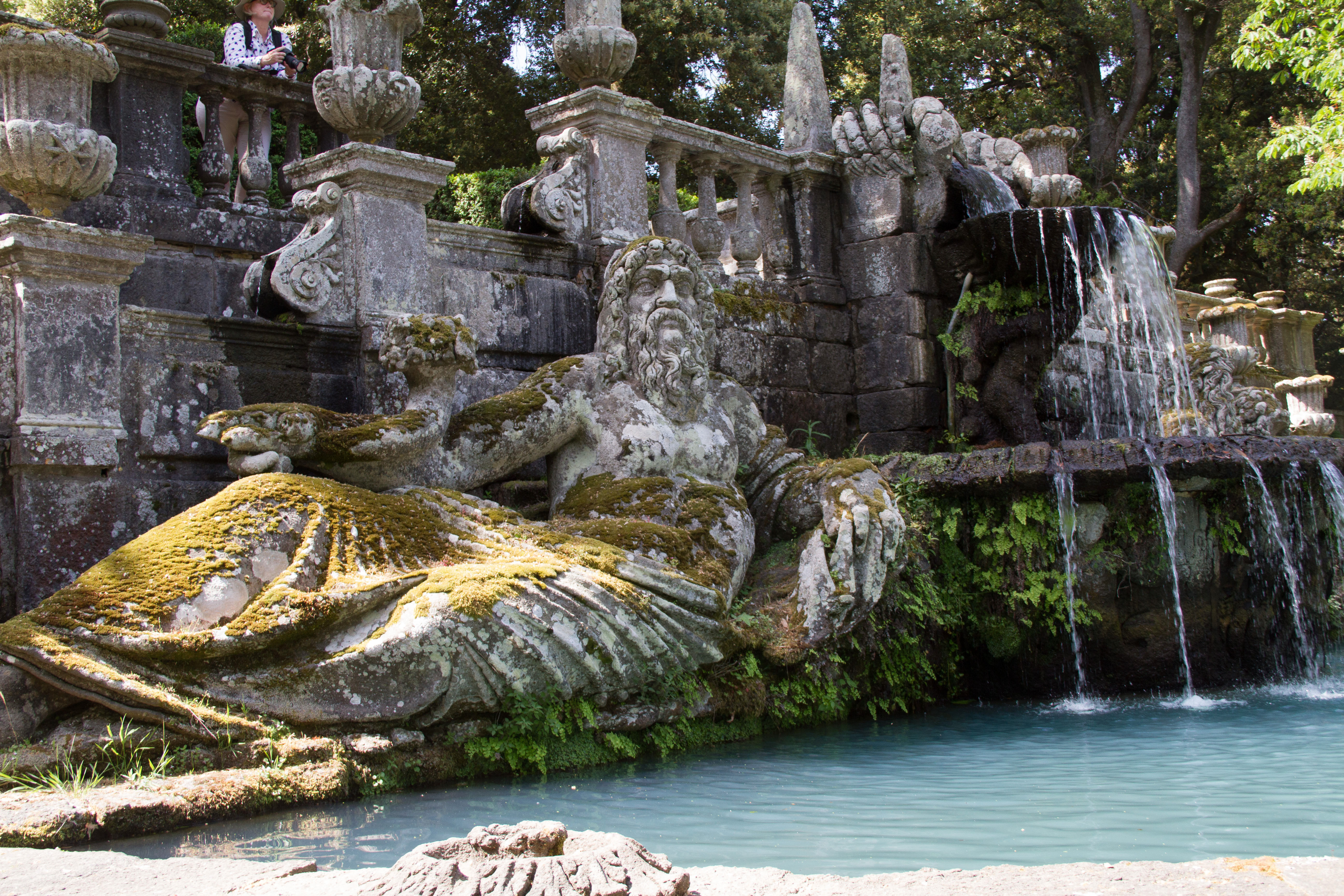 Crayfish claws are visible at the top of the waterfall.

Generosity and hospitality are hallmarks of the middle terrace where a long stone rectangle meant to suggest a dining room table continues the symmetrical layout. The table’s central trough is filled with water where wine could be cooled. For the sophisticated visitor of the period, the reference made by this staging would be obvious: Gambara is comparing his garden to that of the Roman writer Pliny the Younger, who floated antipasti in little boats in a polished marble basin. 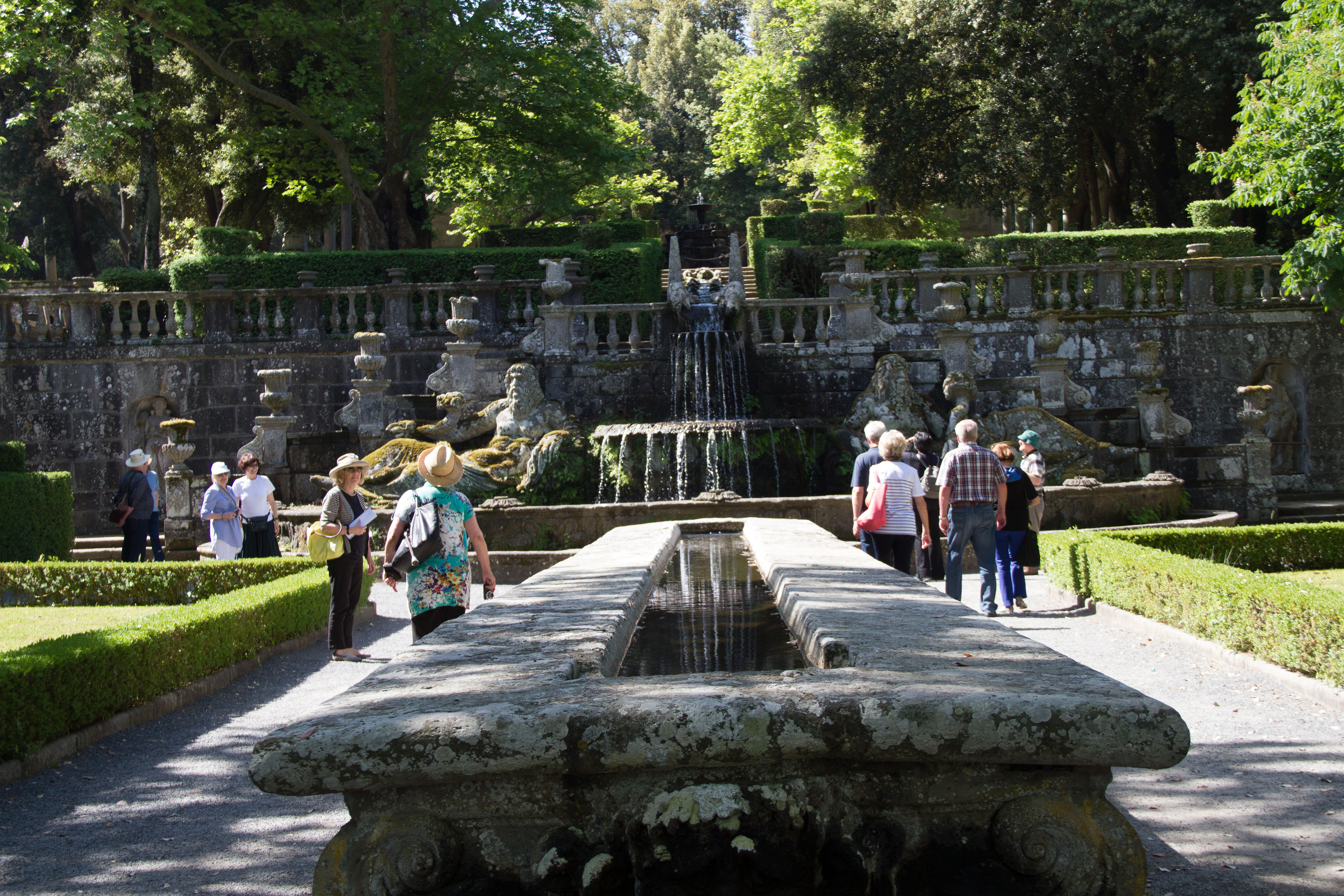 The lowest terrace is a hymn to civilization where man finds salvation through his intelligence and creativity. Formally arranged as a parterre divided into twelve compartments, this level now centres on the Fountain of the Moors, a magnificent work designed by the sculptor Giambologna. 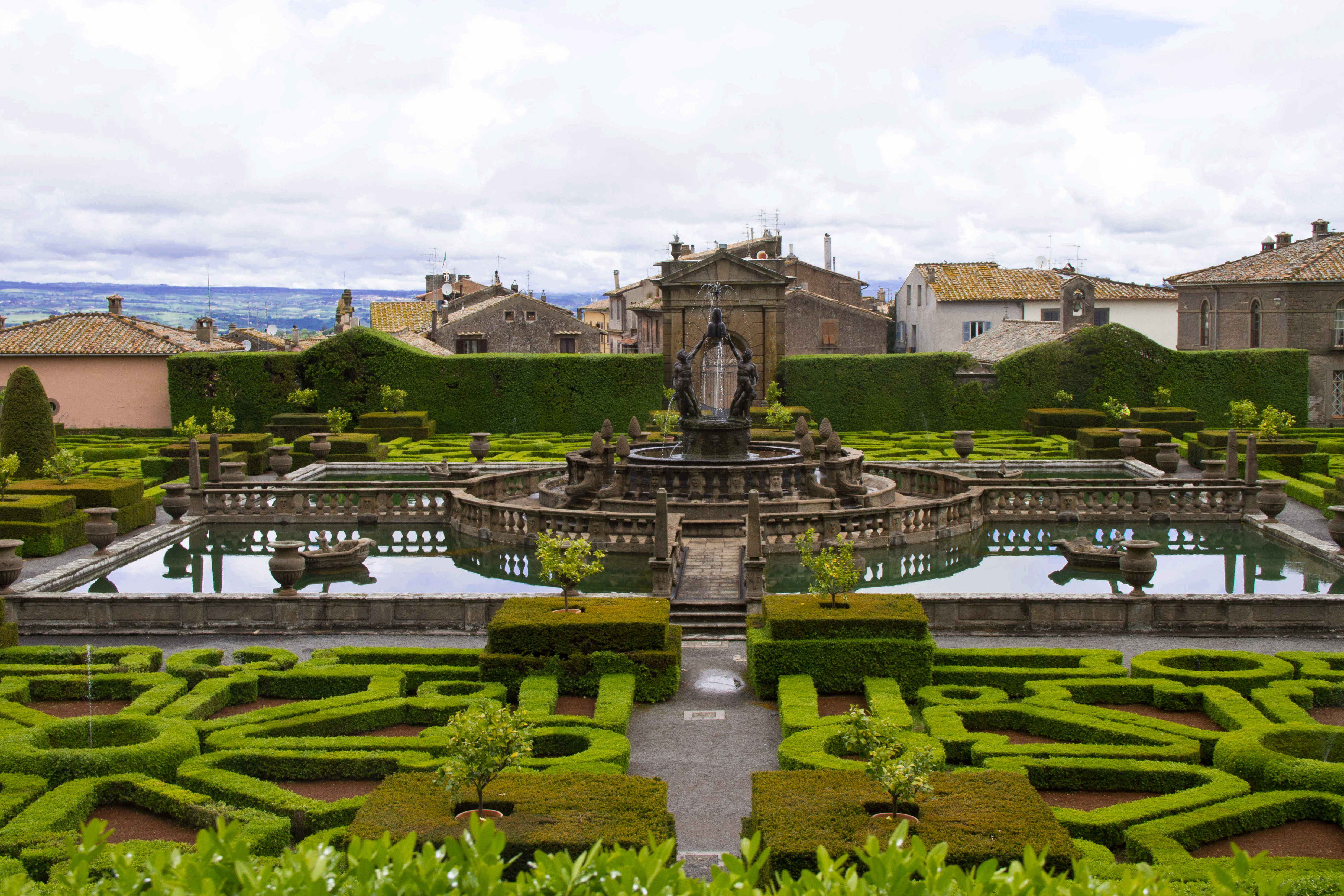 The design of the parterre has changed over time but remains formal and symmetrical.

The fountain sits on an island; in the pool surrounding it, little boats contain men with ancient guns and trumpets, their accoutrements signalling their roles to protect and celebrate both the prestige of the Cardinal and the triumph of civilization. 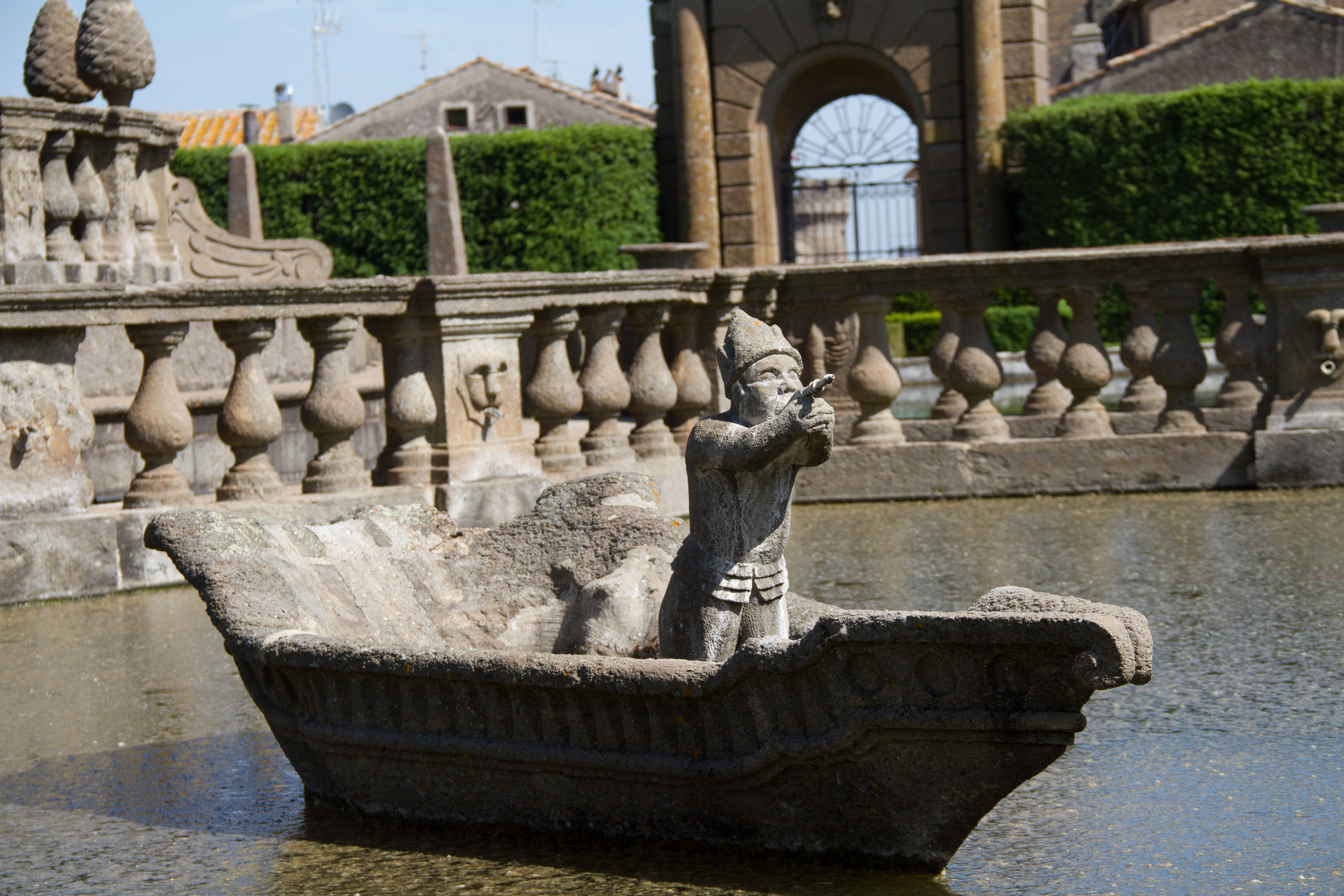 As water moves from terrace to terrace, the sculptures and fountains and all that surrounds them become more ‘civilized.’ The garden becomes more elegant, more controlled. The balustrades that flank staircases from one terrace to the next widen to give fuller views onto the town – or previously the countryside – below, embracing it symbolically to make it the Cardinal’s own. 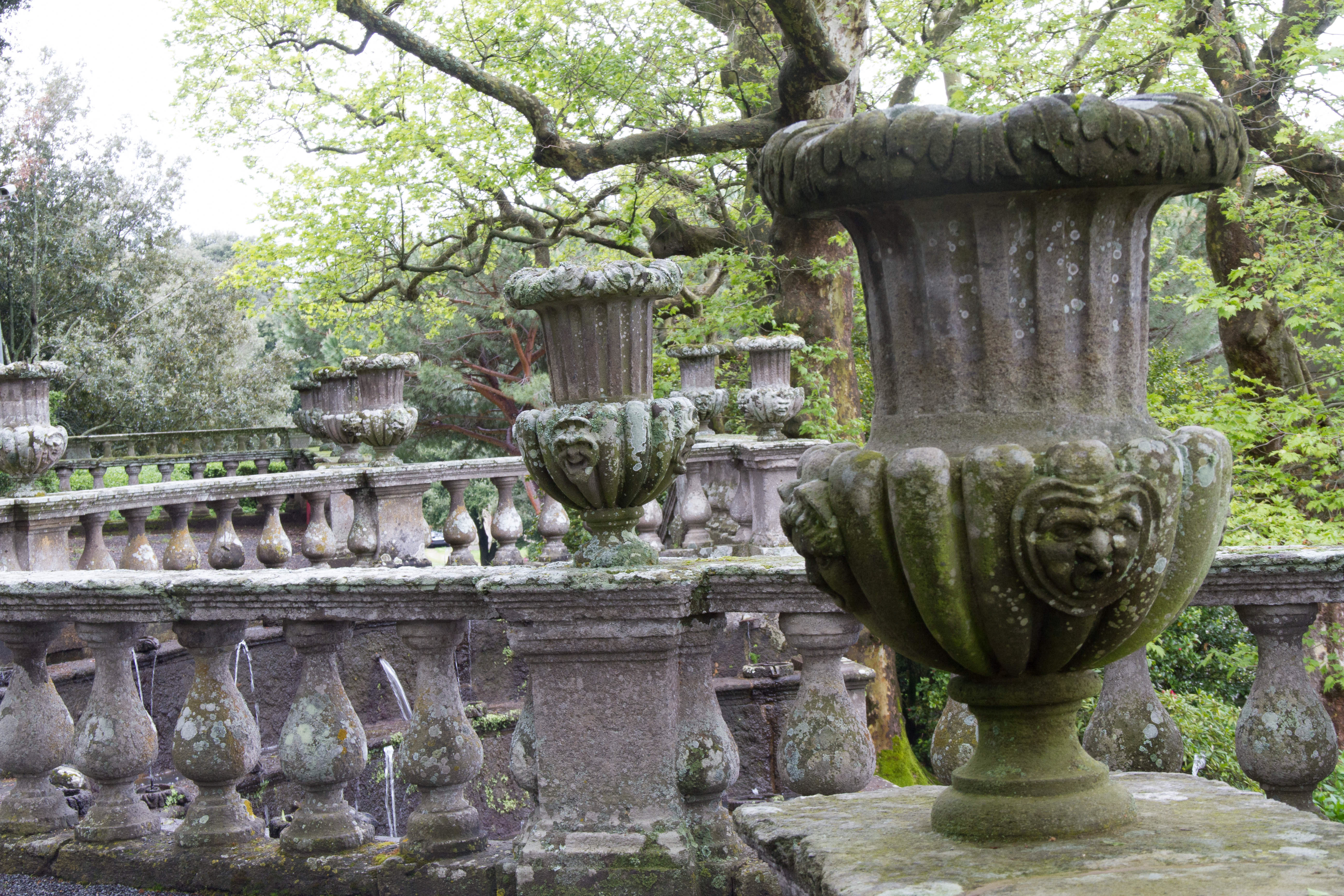 Plantings support this ‘civilizing’ movement. Informal plantings on the uppermost terrace culminate in the square parterres and clipped fruit trees that originally filled the area around the Fountain of the Moors. Two small buildings, or casinos, that offered a place for the Cardinal to entertain his guests are on this level. Large central buildings were common in most Italian gardens of the period, but unlike more imposing constructions, these two small ones do not dominate or compete with the garden but rather are part of it, unifying and harmonizing with the whole. 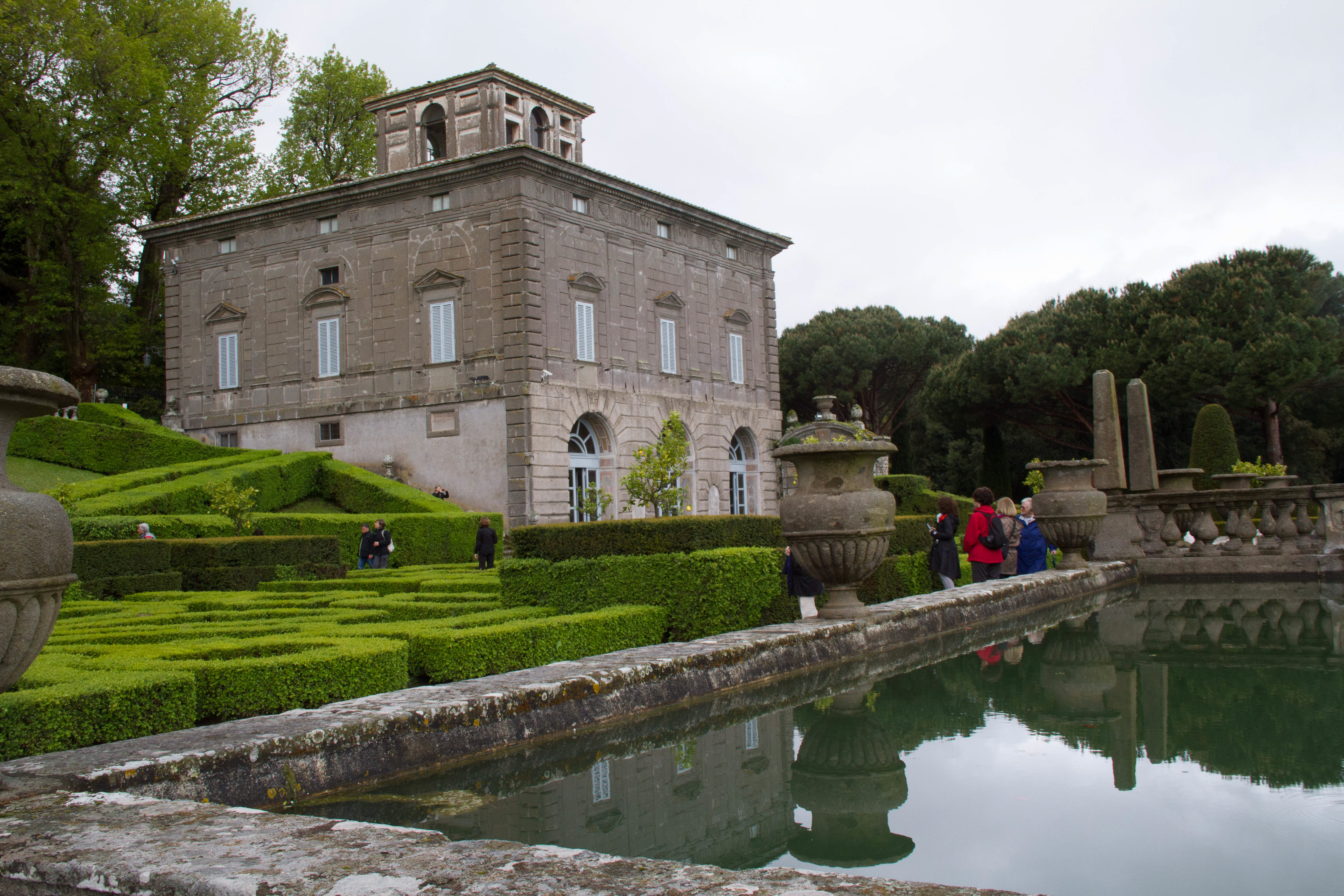 This masterpiece of Renaissance design is smaller than many of the period, yet despite its size, it cannot be seen in its entirety from any one spot.  I think this makes it easier to grasp the garden’s central message about the shift to civilization as art came to dominate nature.  We may not accept that idea but we can admire the garden that demonstrates the concept so beautifully.

I discovered this lovely post on Villa Lante upon returning from my afternoon walk in Westmount Park. Which is always a time of reflection on how design can influence one’s appreciation of nature. Thank you for facilitating this virtual visit to Italy, Pat. Happy Earth Day!

Glad to know you enjoyed the post, Pat. I’m heading out for a walk soon — with boots on again. Thankfully most of yesterday’s snow has melted.

I very Much enjoyed this read and the beautiful images of these gardens. What a wonderful, magical and peaceful place to walk through and enjoy nature, from her wildest to tamest both in design elements and the vibe they create. I image it being abundant with wildlife and those who appreciate all it has to offer the peace seekers. What a lovely place to celebrate today Earth Day 51st Anniversary! Thank you for sharing!! <3 🙂

Thank you for letting me know how much you enjoyed the post.

Love all the moving water in this garden!

It is a very special place.

Oh Pat, this is a beautiful and concise assessment of Villa Lante, you’ve got the “story” just right. Being transported to places we have shared on tour was a wonderful experience – I will await eagerly for the next instalment of your favourites. I’m making my own list and we’ll see how we match up!

It will be fascinating to see how/if our favourites match. One of the ideas behind my ‘favourites’ is whether there were design ideas that I could incorporate at Glen Villa. The movement of water at Villa Lante, from the top to the bottom of the garden, is something I picked up on and replicated here.

What a remarkable garden! The way water moves around the garden now in rock channels softened by lichens and mosses is striking. Thanks for sharing this garden with us.

It is a fabulous garden, Lisa, and one of many Italian gardens that shaped the history of European garden design.

This is also one of my all – time favourite gardens- a delight from bottom to top and back down again. It instilled a sense of joy that I think I have only experienced in Italian gardens. Bomarzo, Isola Bella, Villa La Balze, Ninfa (and others lift my spirits).

There is a very special spirit in some Italian gardens, and Villa Lante has it big time. I am also a fan of Ninfa, La Balze, I Tatti, Bomarzo, La Torrecchia, Villa Cetinale…. I could keep naming Italian gardens for a long time. but I never had the chance to visit Isola Bella. Lucky you!