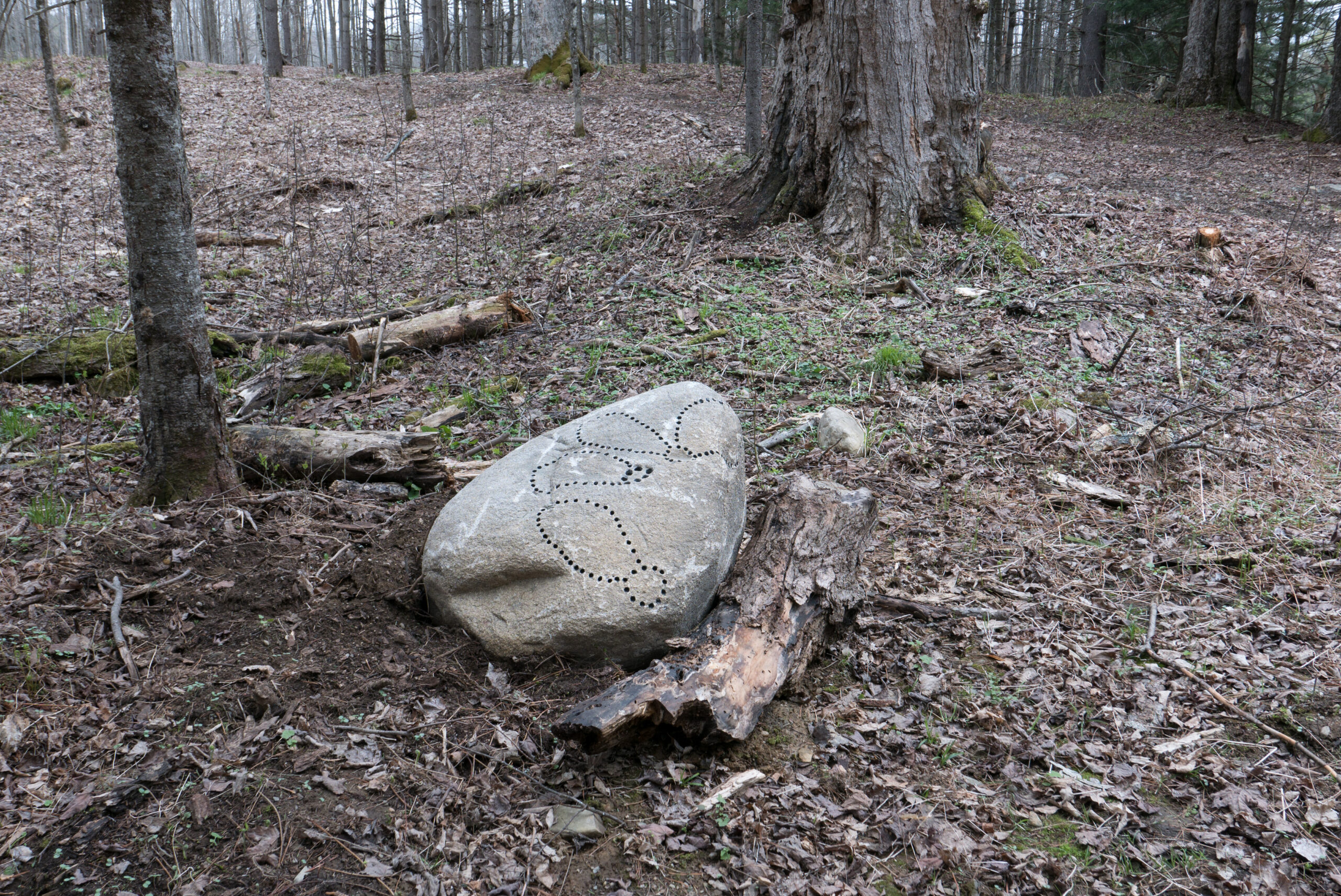 When our children were young, I dreaded taking them to the grocery store. If I was lucky, the expedition would be quick and easy. But some days, the little brats screamed for chocolates  or put unwanted items into the shopping cart, and when I took them out, they created a scene. Unpleasant for me and for everyone around us.

Scenes in the garden are another thing entirely. They can be magic, transforming an ordinary arrangement into something special. And today, with help from Jacques Gosselin and Ken Kelso, I made one.

The scene we created is next to the Continuum pool. Continuum is part of Timelines, the series of art installations that ask questions about history and memory as a way of delving into our relationship with the land.  Continuum is meant to illustrate how each small change we make affects what follows … a variation of the butterfly effect, in which a tiny modification ends up making a large difference.

I’ve used wood, rocks and water as the way to demonstrate this, with maple trees the dominant element. I’ve shown them as young saplings and as elders, as a source of food and shelter for humans and animals, as commercial product and as inspiration for art. Last winter I drilled rocks with the pattern of the maple key or samara, the little helicopter thing that contains the tree’s seed. We placed one drilled rock along the path near an ancient maple. 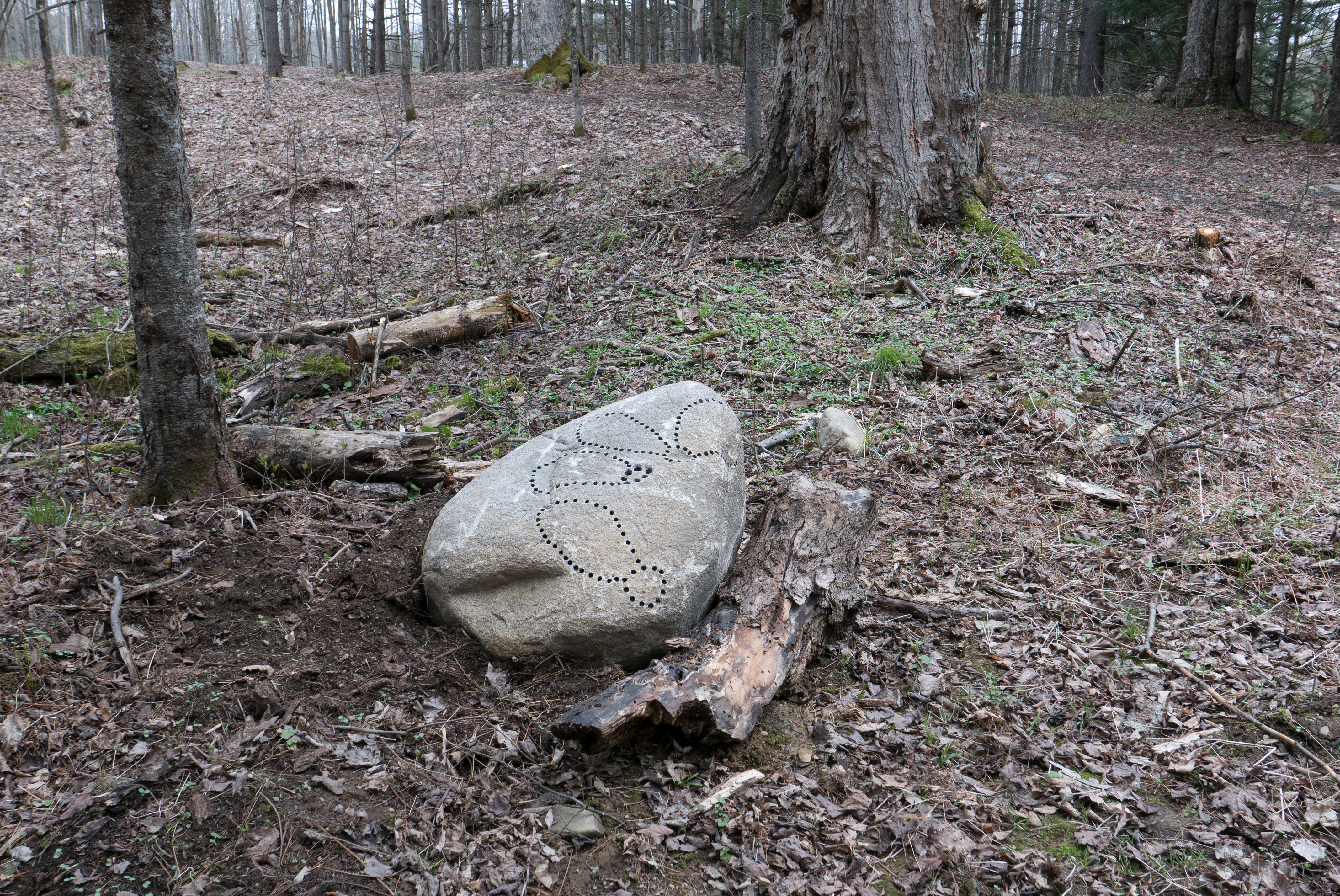 We placed two more drilled rocks beside the Continuum pool, beside one rock I left undrilled. On the slope above the pool we arranged rocks to outline the samara shape, creating a positive version that mirrored the negative one below. 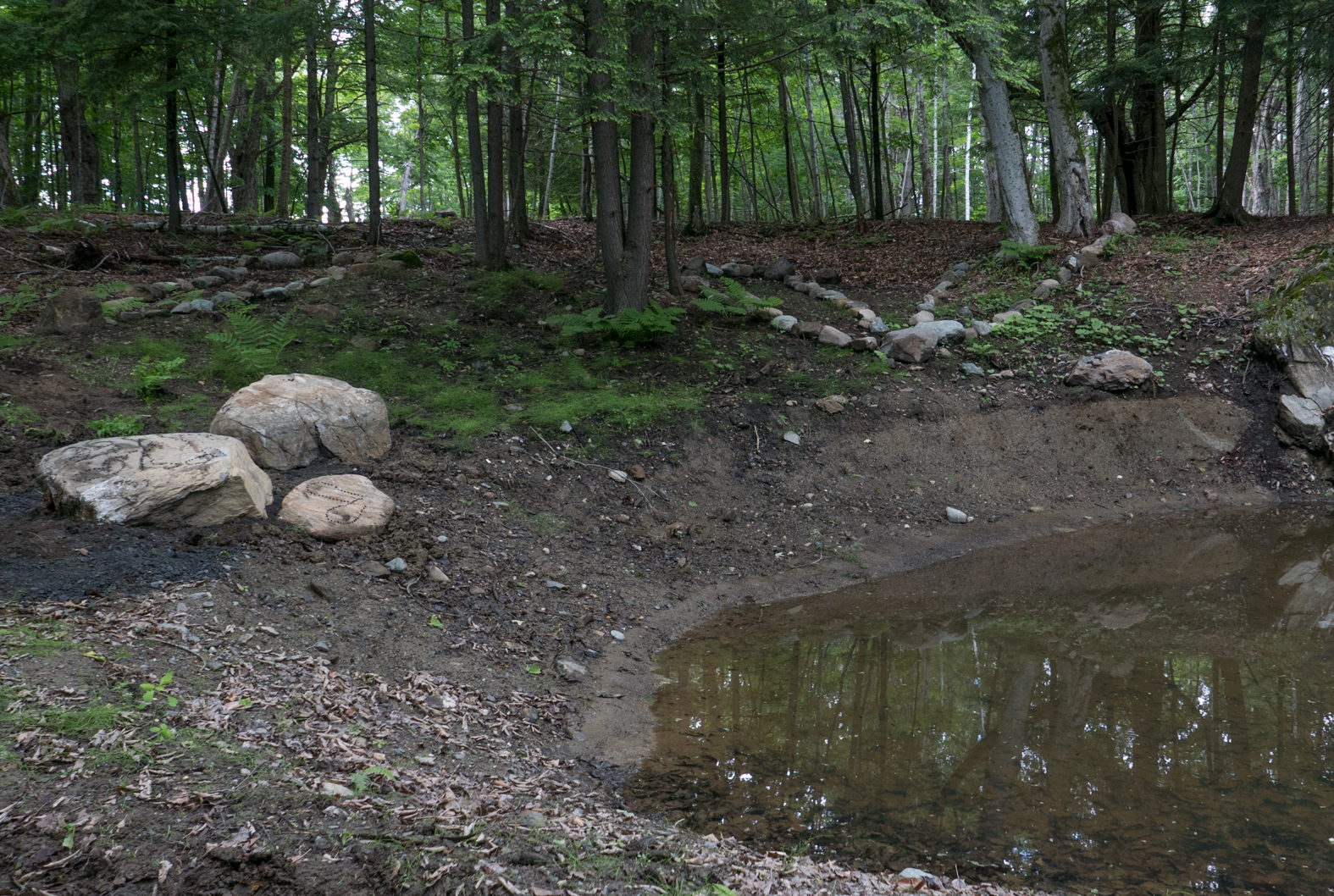 Over the summer, we seeded the area and brought in some ferns to make the drilled rocks look as if they had always been there. 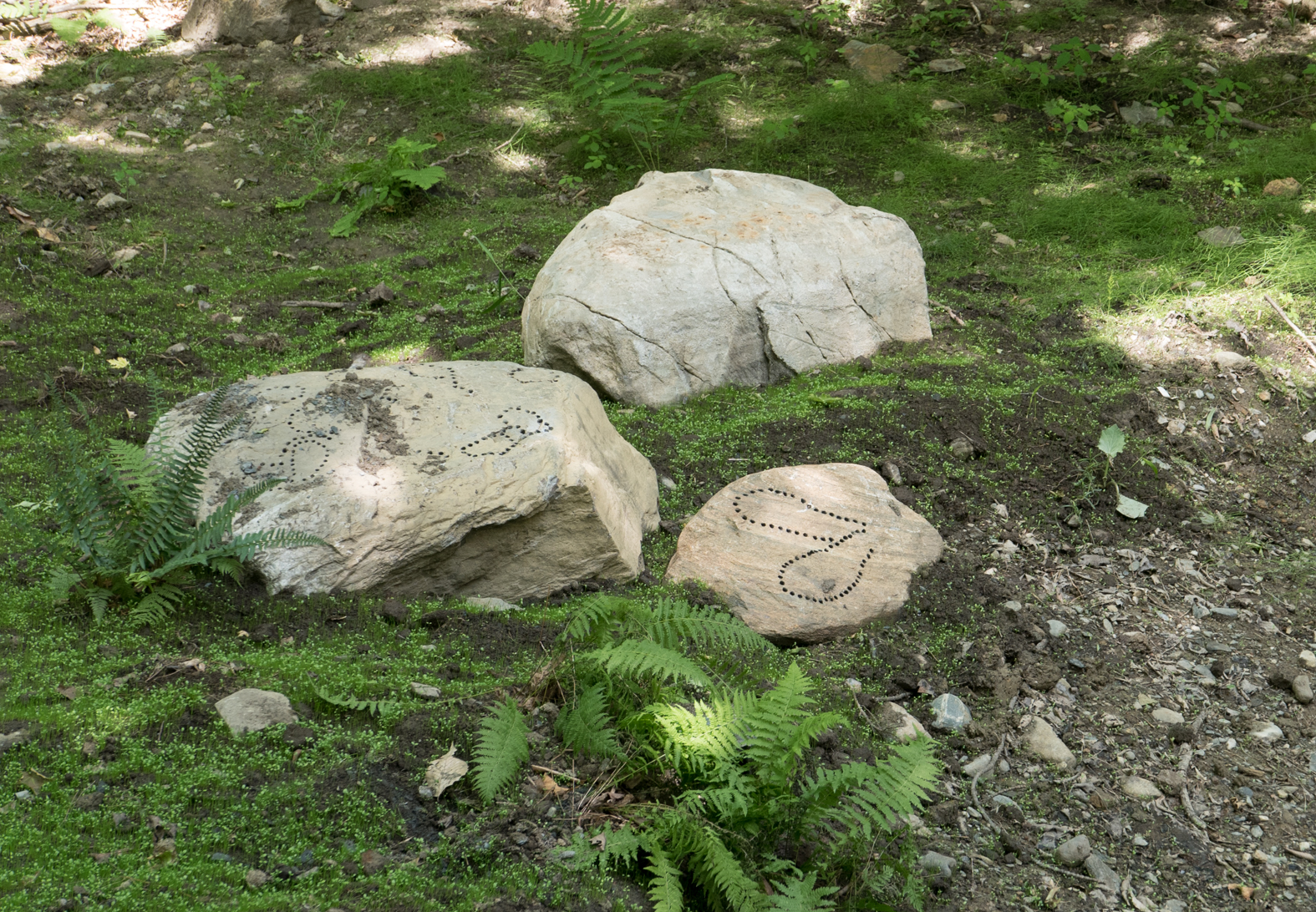 I liked what we’d done but it wasn’t quite right. People noticed the rocks on the sloping hillside but often missed the drilled rocks below. And for the full message to be conveyed, they needed to notice both.

A few weeks ago, I went around Timelines with my friend John Hay. He suggested a simple solution: turn the smallest rock clockwise, so that the drilled holes echoed the pattern of rocks on the hillside above. This morning we did that. And we did one thing more.

This is the result. 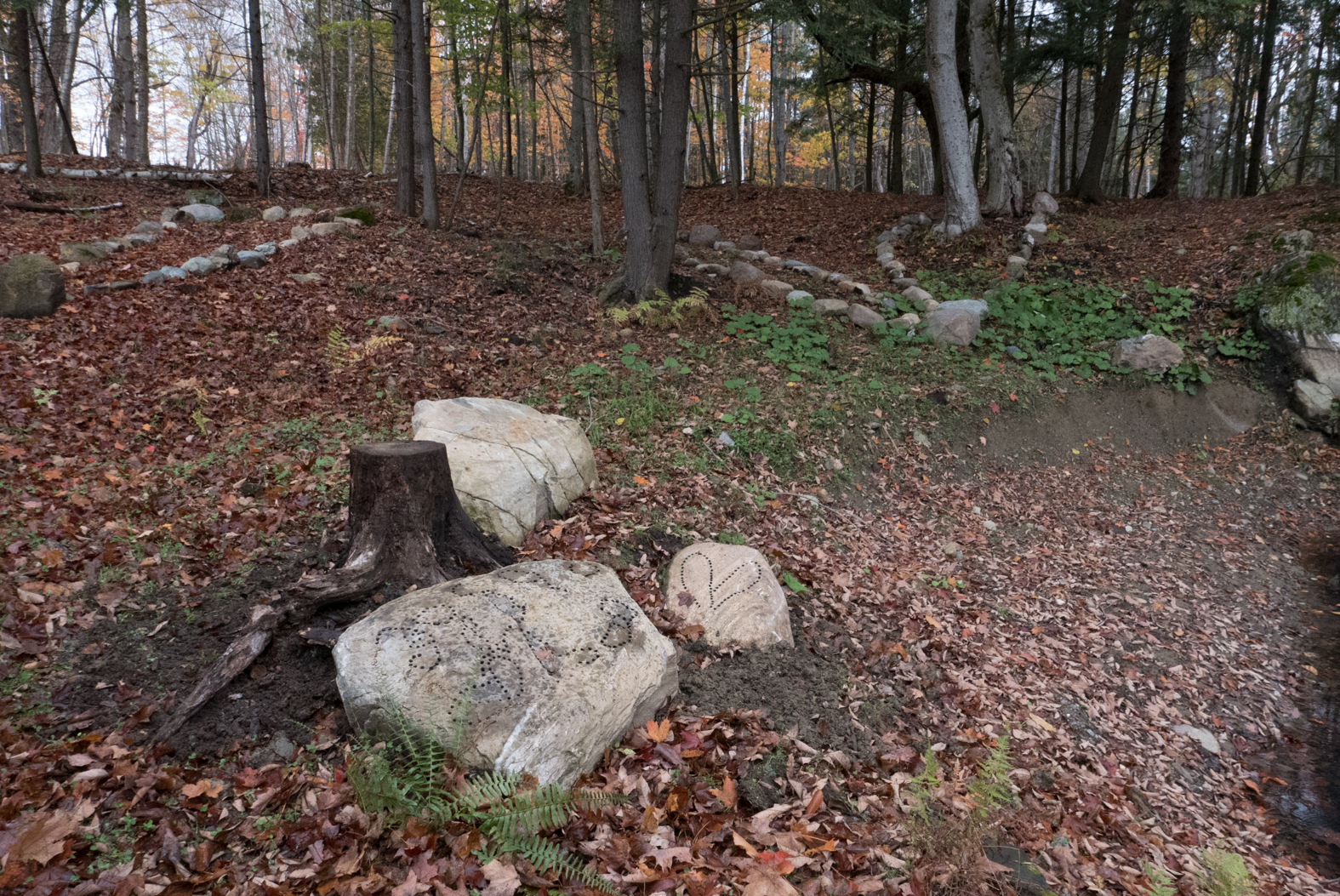 Turning the rock and making it more upright helped. But it was adding the tree stump that created the scene. It’s more than a scene, though. Not only does the stump draw  the eye, it also continues the theme. Beginning and end in a single glance.

Despite the rain and the sudden drop in temperature, I count this as a very good morning indeed. Here’s hoping your day goes well, too.

Lovely, Pat. We’ve just had quite a bit of tree work done: pruning Norway maples (a great improvement), removing a number of them, removing dead aspens and a dead spruce, and a unfortunate dark-leaved cultivar, too. It opened up the landscape remarkably. It’s amazing how small changes can make such a difference.

I agree completely. About ten years ago I cut down some trees near the big waterfall and was amazed to see the difference. I’ve enjoyed your posts and photos, Lisa. I know you’ll be heading south before too long… happy travels!