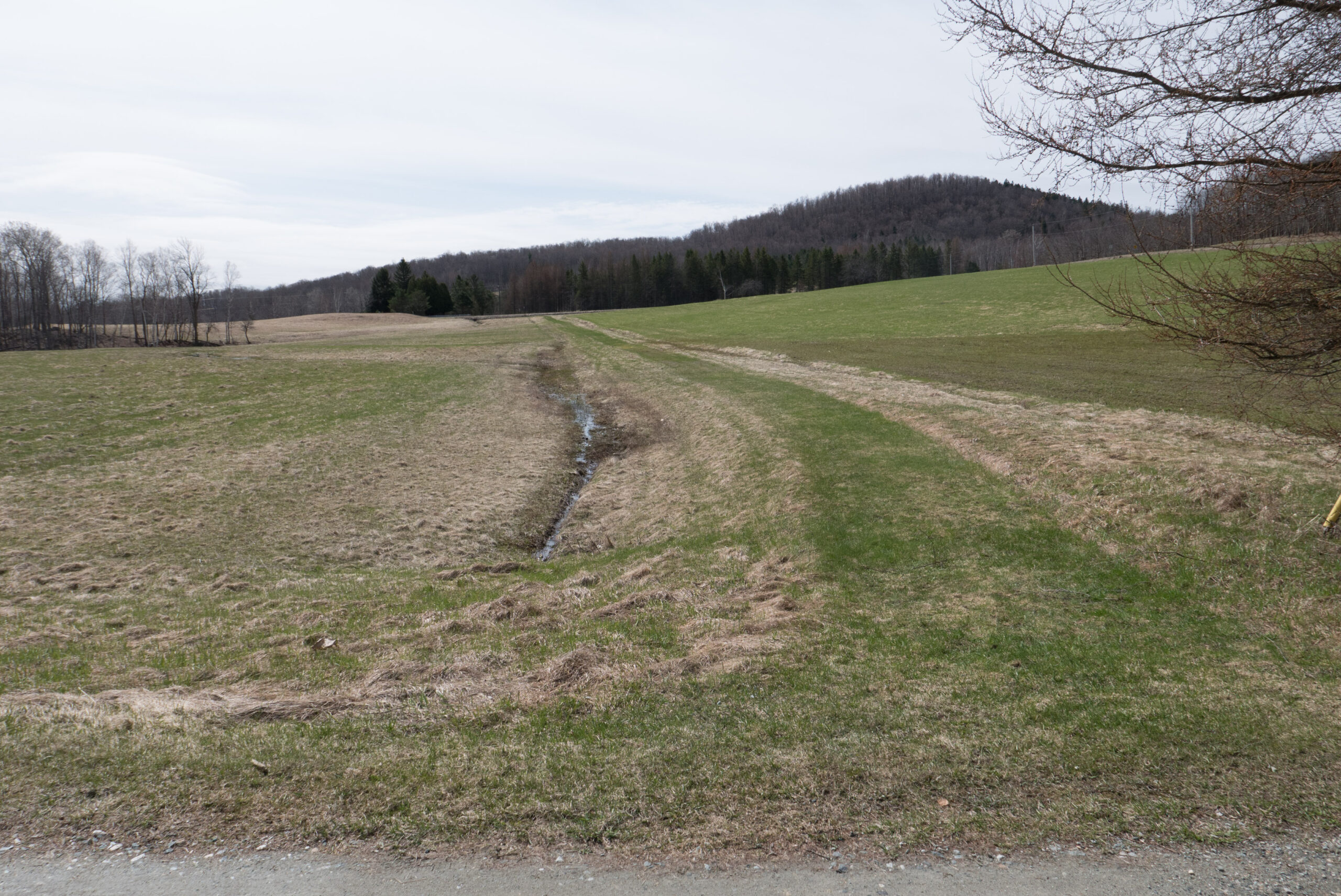 In just over a year, the Crabapple Allée, aka the Avenue, has gone from dream to dirt, to bloom and gone.

We started with this, a dull bare field.

I took this photo on April 24, 2017, when I became serious about planting a long allée of trees,. The walk through the trees is part of a larger project I’m still working on.

Four months later, The Avenue was beginning to take shape. 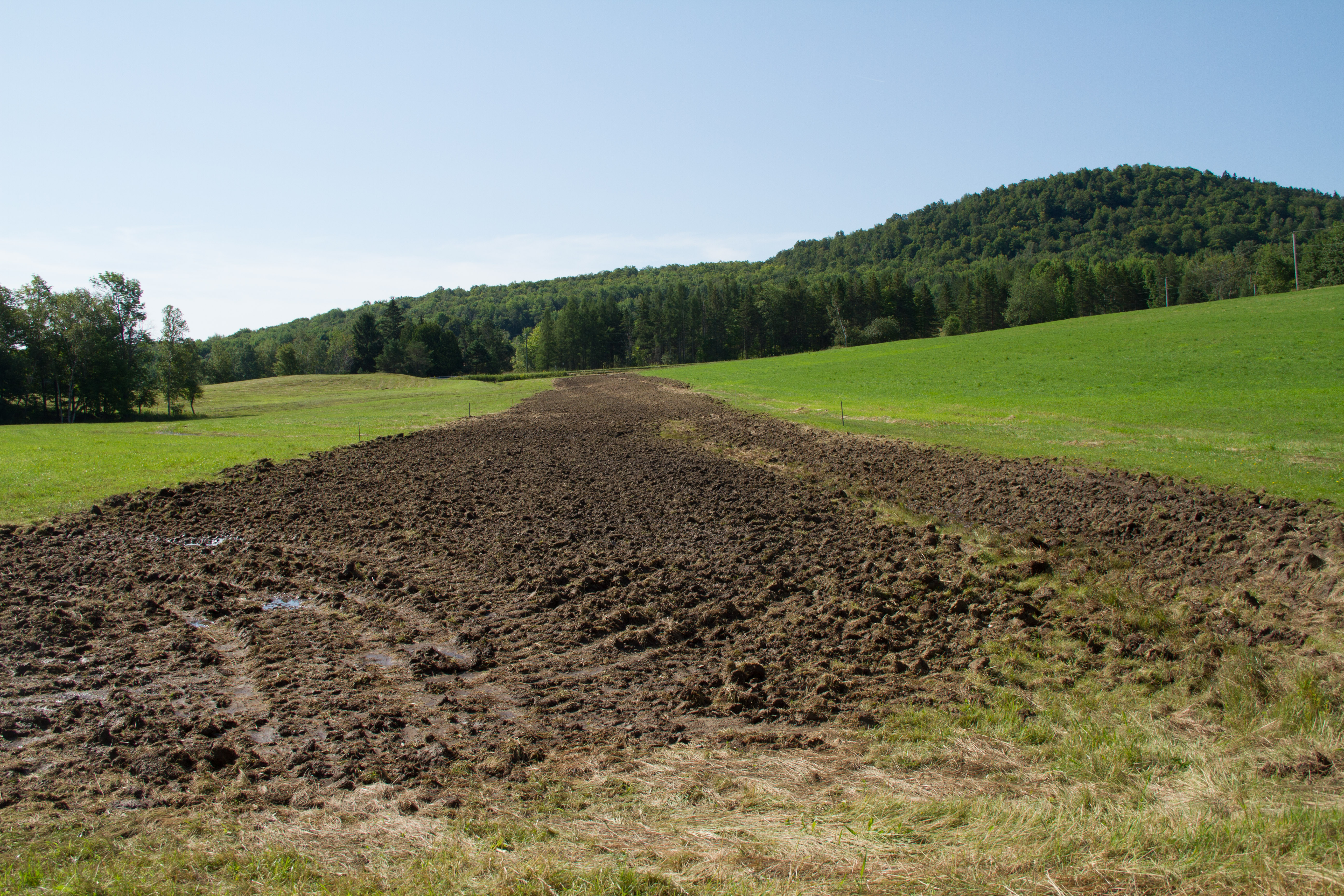 By mid-November, the site was a mess of wet earth and newly planted trees. 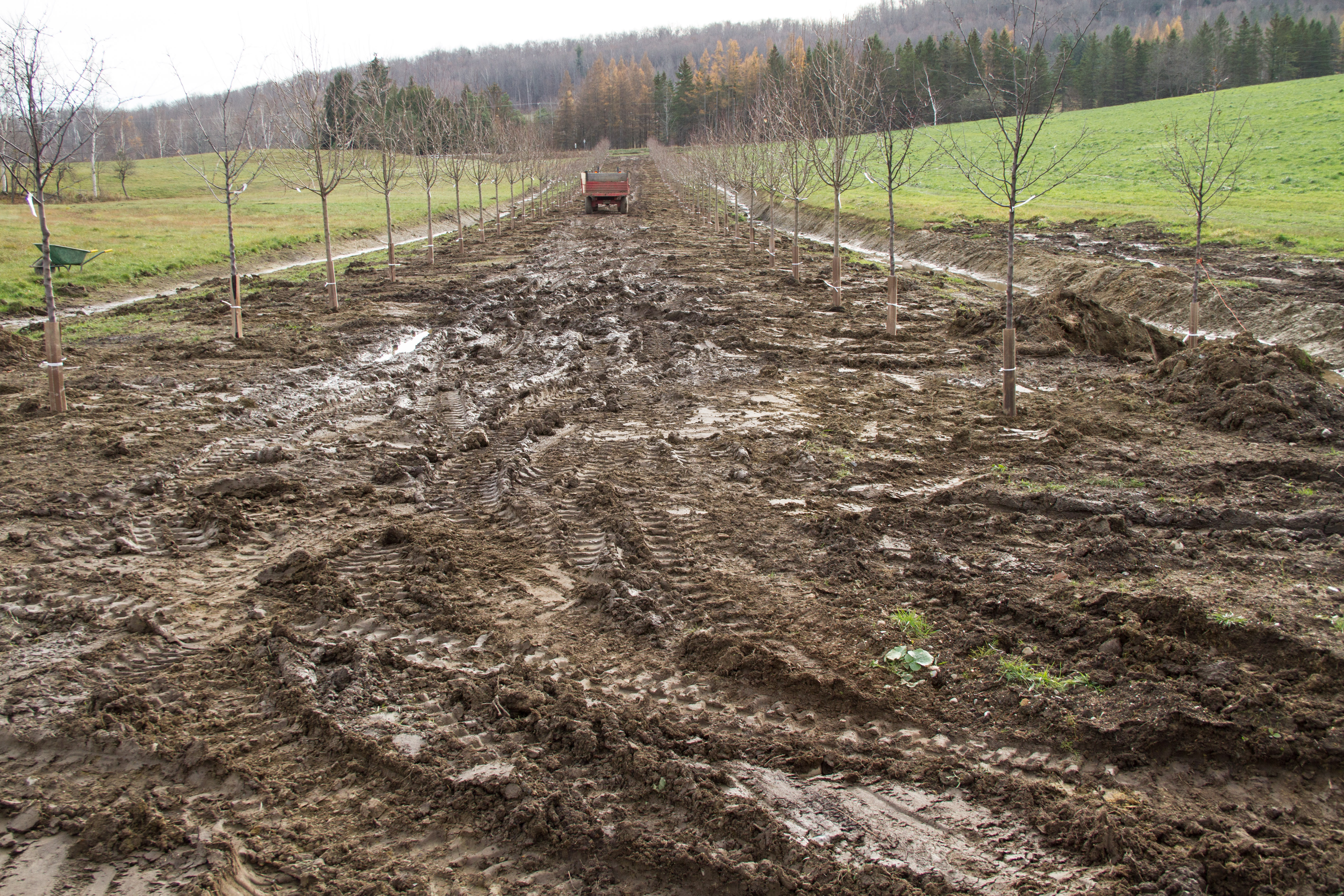 While the trees rested, I kept my fingers crossed. How would they survive the freeze and thaw of a difficult winter? 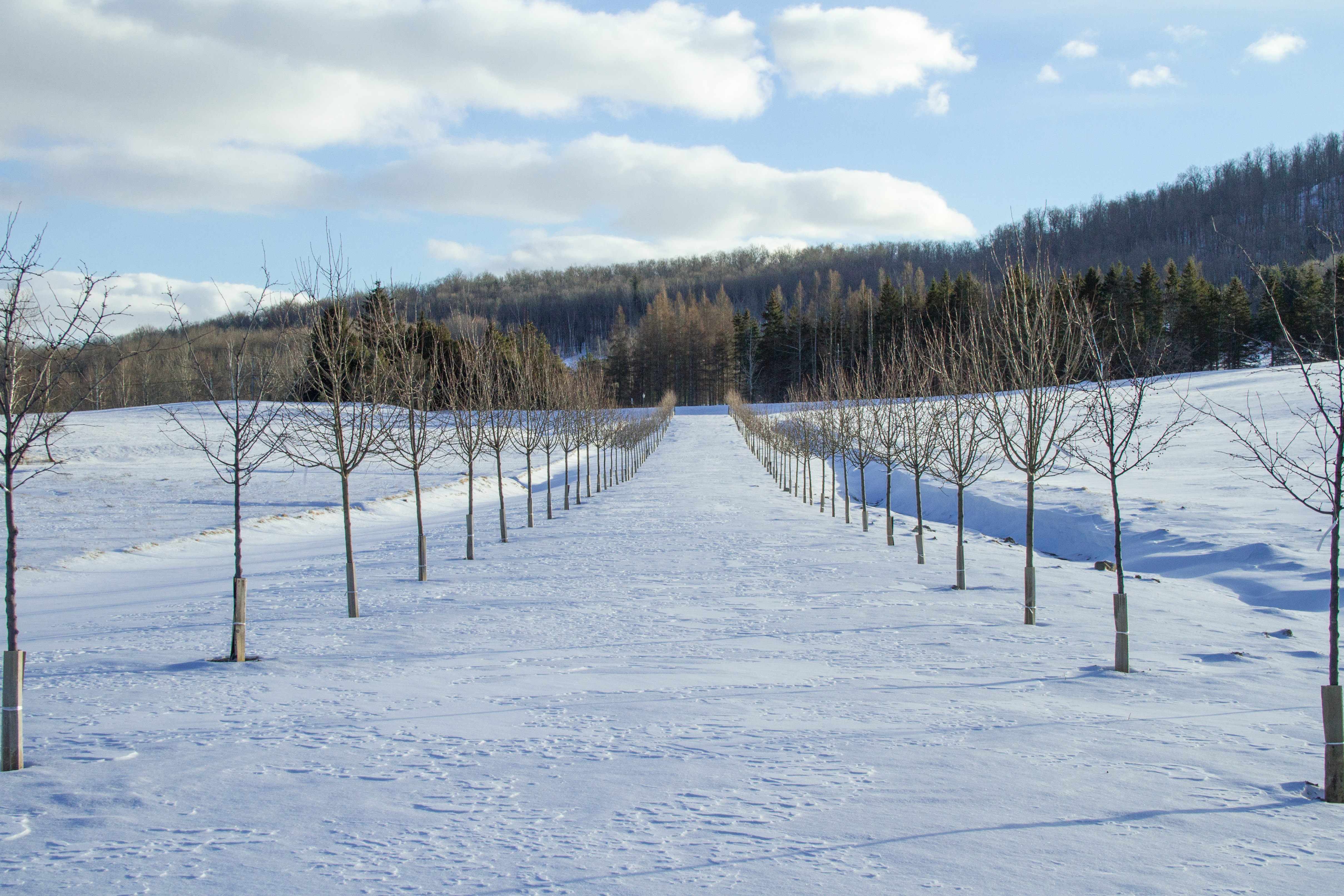 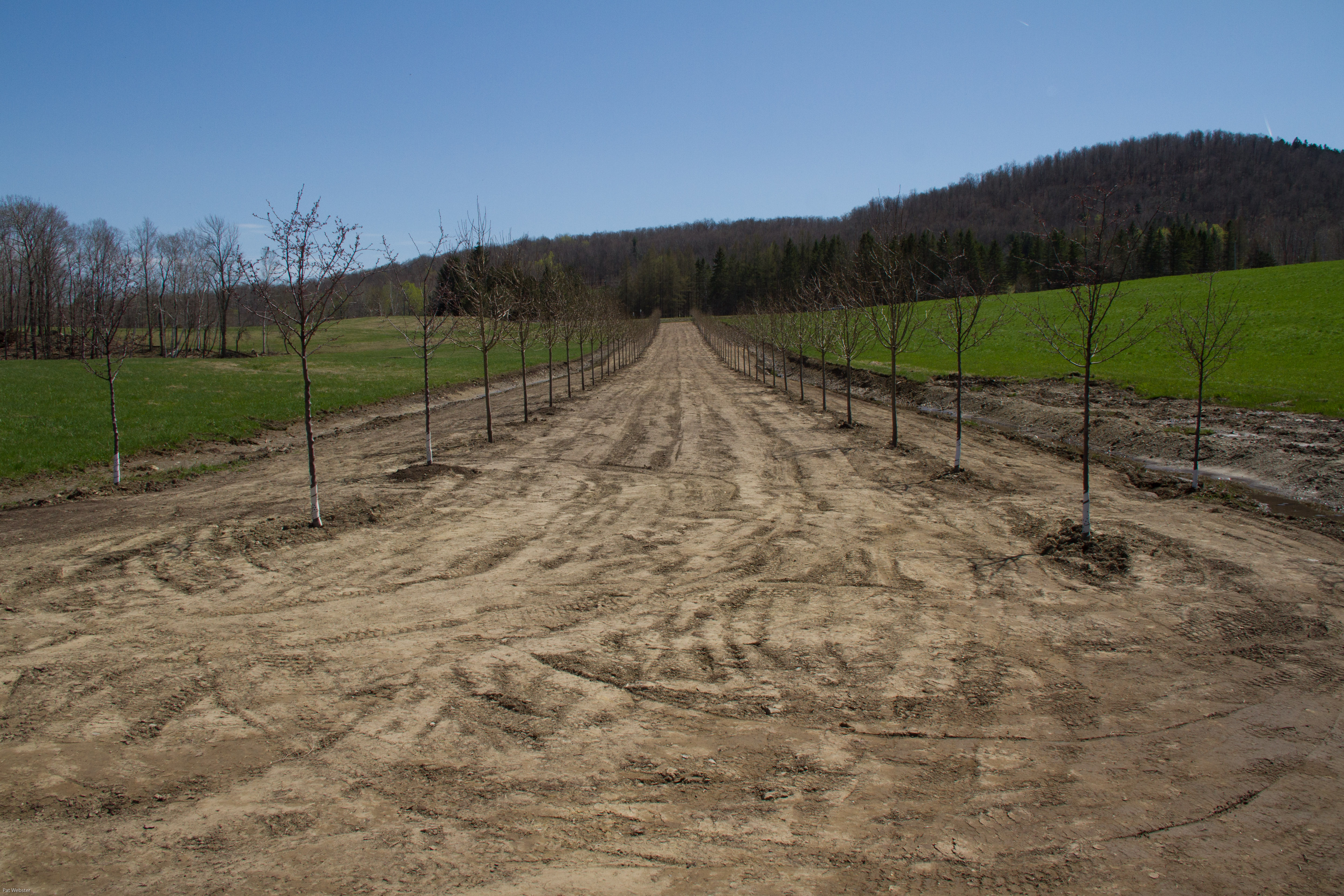 May 8, 2018. By this time we’d seeded the bare ground and were waiting for the seeds to turn it from tan to green.

Two weeks later, the excitement was building. Some trees were in bloom, others were about to start. 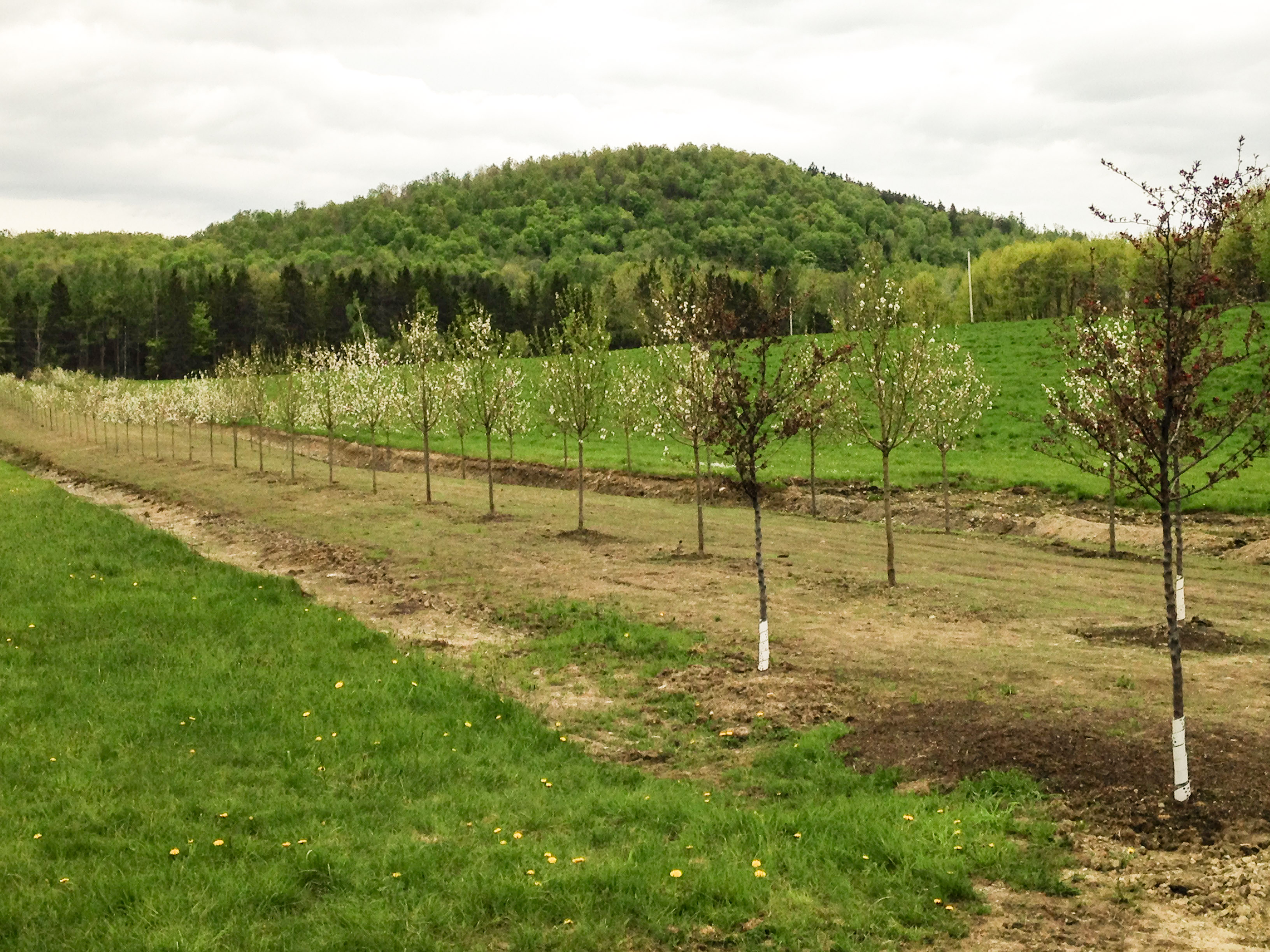 Warm weather began to open more blossoms but the full impact was not yet there. 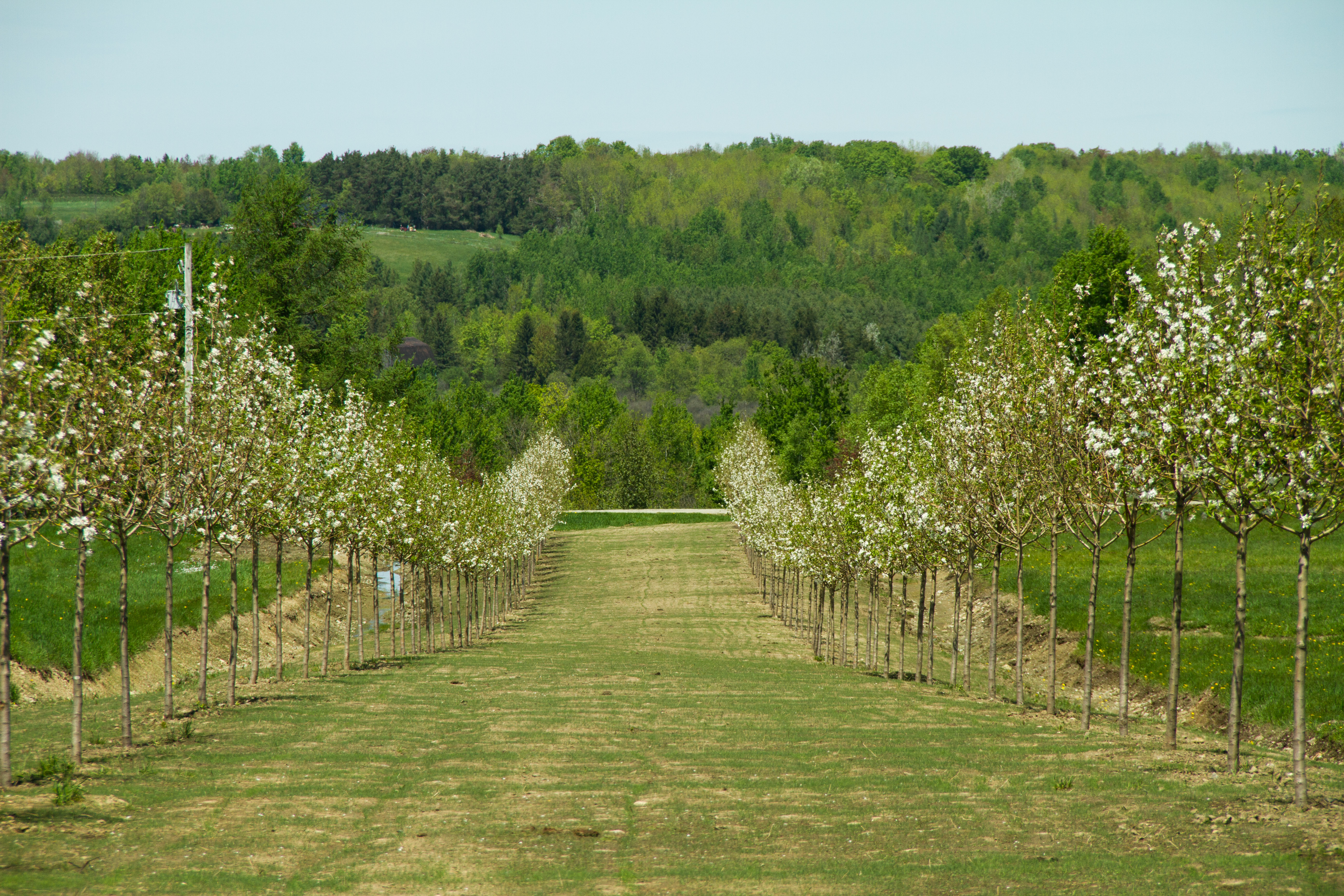 On May 26, only two days after I took the photo above, the trees were in full bloom. The sky was grey, though, so I decided to wait until the following day to photograph the trees at their best.

That night it rained. Hard. The next morning, all the blossoms were gone.

I’m disappointed not to have a photo of the trees fully in bloom, but the image is there in my mind. Considering that this was their first year, the trees bloomed magnificently. Next year they will be better. And the year after, better still. 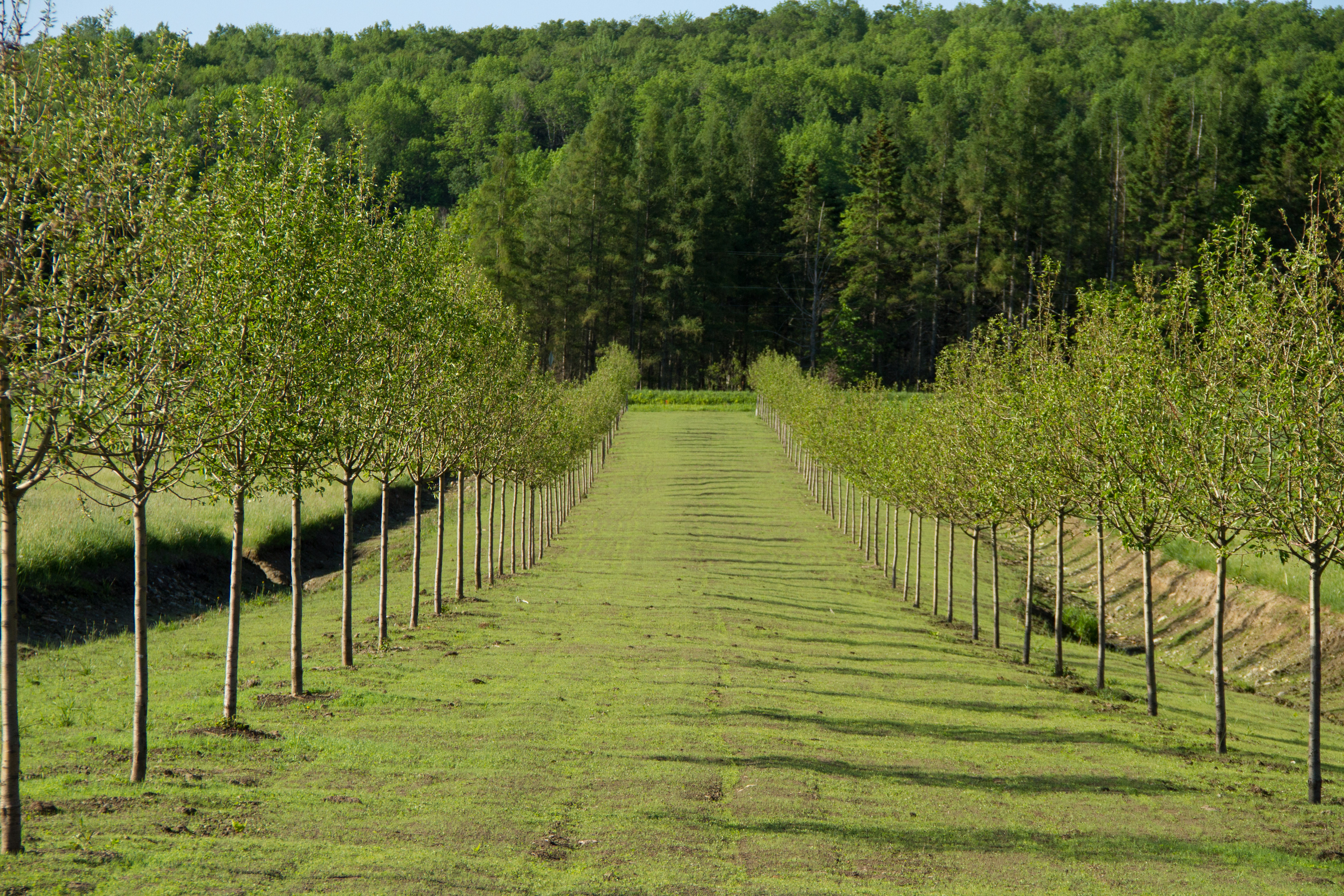 The best news is that every tree made it through the winter. Hooray!

Hope and gardening grow hand in hand. It will get better every year, especially when they begin to fruit and you have a field of trees with ornaments. Awesome!

Think of all the crabapple jelly I can make!

And you can also make your own natural pectin to use in low-pectin fruit jams and jellies.

You’ll have to tell me how to do that, Nancy.

Brings to mind a cactus I had! I got up in the early morning and went to the kitchen and noticed it had bloomed! Yup, you guessed it, blooms in all its glory for one night only…no picture! Crabs and magnolias didn’t last too long here with the wind and all in comparison to last year!

Don’t you hate missing something you’ve been waiting for? Our flowering trees were really good this year, although last year seemed even better.

I like seeing them in a nice, straight line. I imagine you had a string stretched taut and planted to the string, but knowing how difficult it is to dig in my soil, I never seem to get plants in the exact spot I intended. So if I ever attempted something like this, that is the part I am afraid I would screw up, getting them lined up just right.

Getting the line straight was really hard. We used a laser beam to make sure they were.

I’m looking forward to seeing where The Avenue leads me.

An intriguing comment, Elinor. There is a destination, for sure — I hope to reveal it before too much longer.

That looks amazing already and what a great treat to look forward to every year. You obviously have a reliable supplier. A 100% survival rate for that many trees is quite a result!

I am fortunate with my supplier, particularly since we ended up planting the trees later in the year than I would have liked. Plus, I can’t wait to see the trees in bloom next spring!

I love crabapples. Your Avenue will look better every year. Now maybe you need a lagoon alongside to reflect the crabapple blossoms …

The Avenue is beautiful and I can only imagine how lovely it’ll be as it matures. I can’t wait to see future photographs. A crabapple (or maybe redbud/dogwood; I love them all) allée has always been a dream of mine.

siteandinsight
Reply to  Cultivated and Wild

I never dreamed of having an allée like this — but I’m delighted that I do. Here’s hoping your dream comes true.

What an impressive allée! The crabapples seem to be amazing. There are pink ones here in Bas St. Laurent almost in flower now, including in our own (new) landscape.

It is impressive now and should only get better. Our hawthorn trees are blooming now and everything looks grand!

This is a wonderful project from inception to completion. Great execution!! Congratulations!