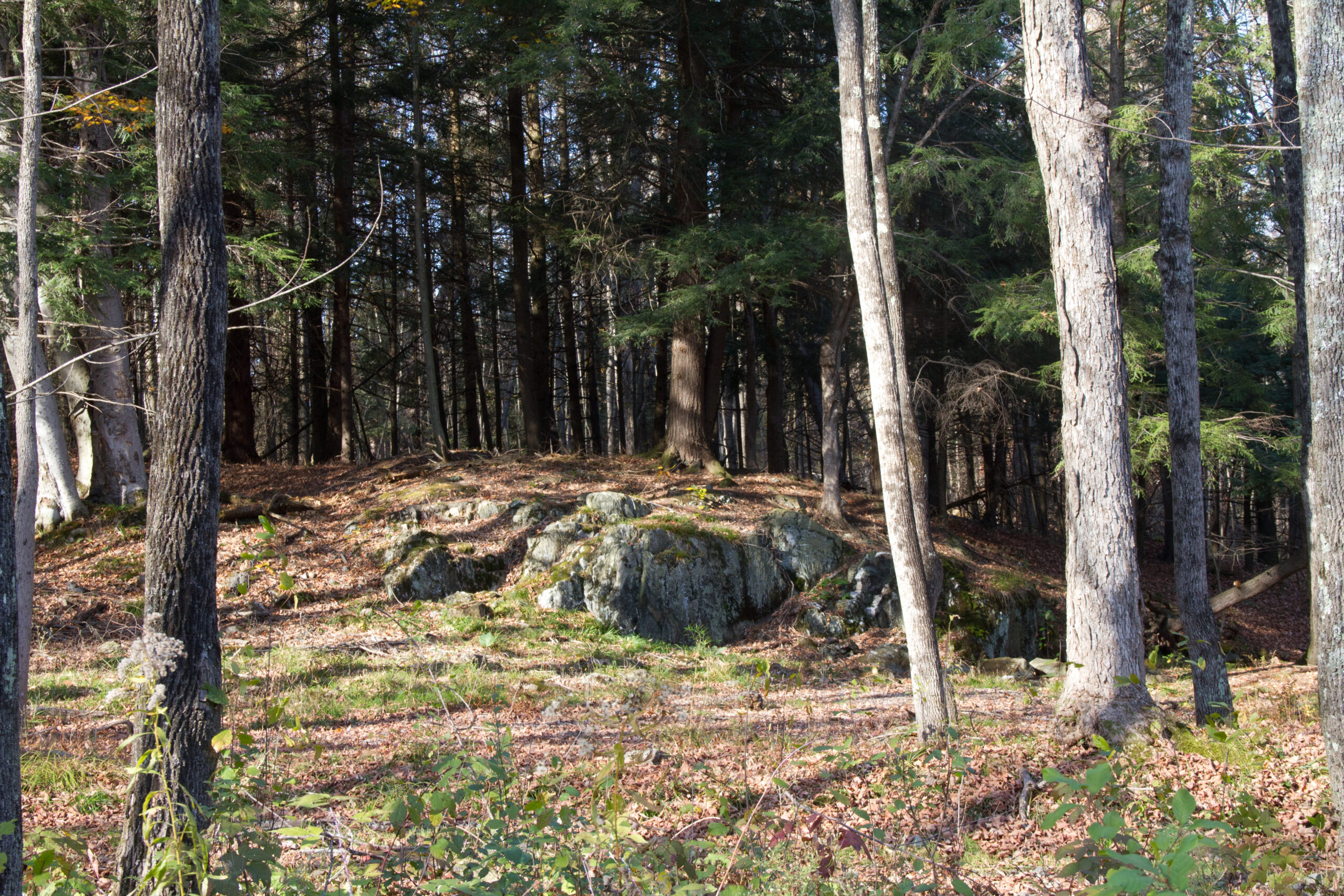 “There is often a huge difference between an idea and its realization. Ideas must be put to the test. That’s why we make things, otherwise they would be no more than ideas.”

Andy Goldsworthy’s words ring true for me. I have more ideas than I can realize, certainly more than I can act on in my lifetime.  Folders splitting at the seams contain scribbled thoughts and doodles, pages torn from magazines, projects detailed but never executed.

So when I begin to translate an idea into the reality that Goldsworthy speaks of, there is genuine satisfaction. There’s a sense of excitement, of momentum, of fear. Will my idea translate well? Will I be able to realize it fully?

Timelines, the trail at Glen Villa that explores ideas about history, memory and our relationship to the land, started with a desire to create a path that led past interesting formations on the land, natural highlights that I had noticed over the years.  One of those highlights was an outcropping of rock in the woods. It spoke to me of age and the passage of time, and I began to call it Rock of Ages.  But that name had too many religious connections and connotations and it inspired nothing except a song in my head. 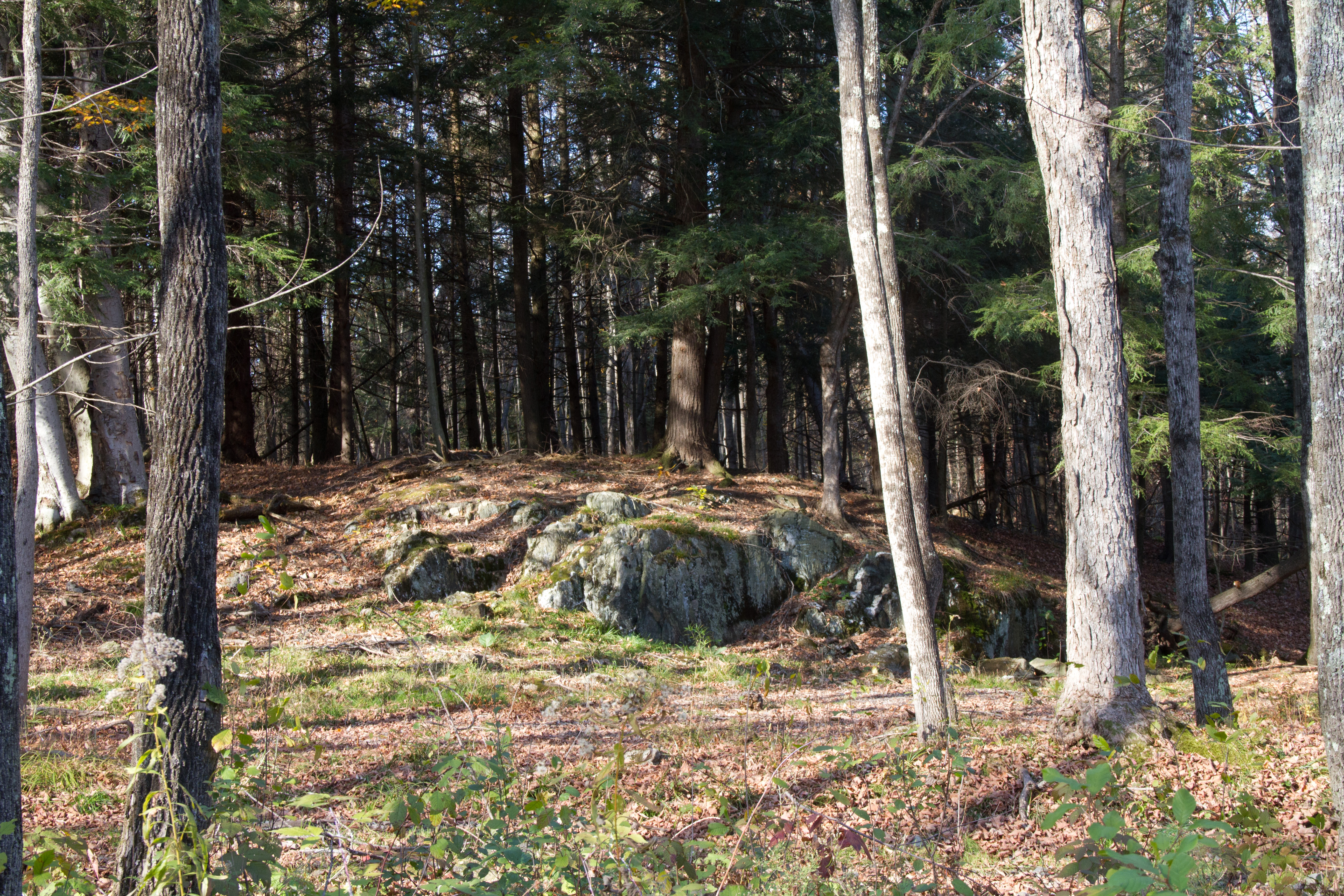 This is how the rock looked in 2013, long before I started on Timelines or the current the extension to the trail.

Earlier this summer, in an attempt to expose more of the rock, we dug down near its base. Much to my surprise and delight, water appeared. And as we enlarged the hole, the water kept rising.

Water joined with rock to become essential elements in what I now knew would be an extension to Timelines. I knew the route. It would begin in an open field and enter a section of  woods where ancient maple trees, gnarled and broken, nonetheless still stood tall. These were Elders who had weathered every force thrown at them. 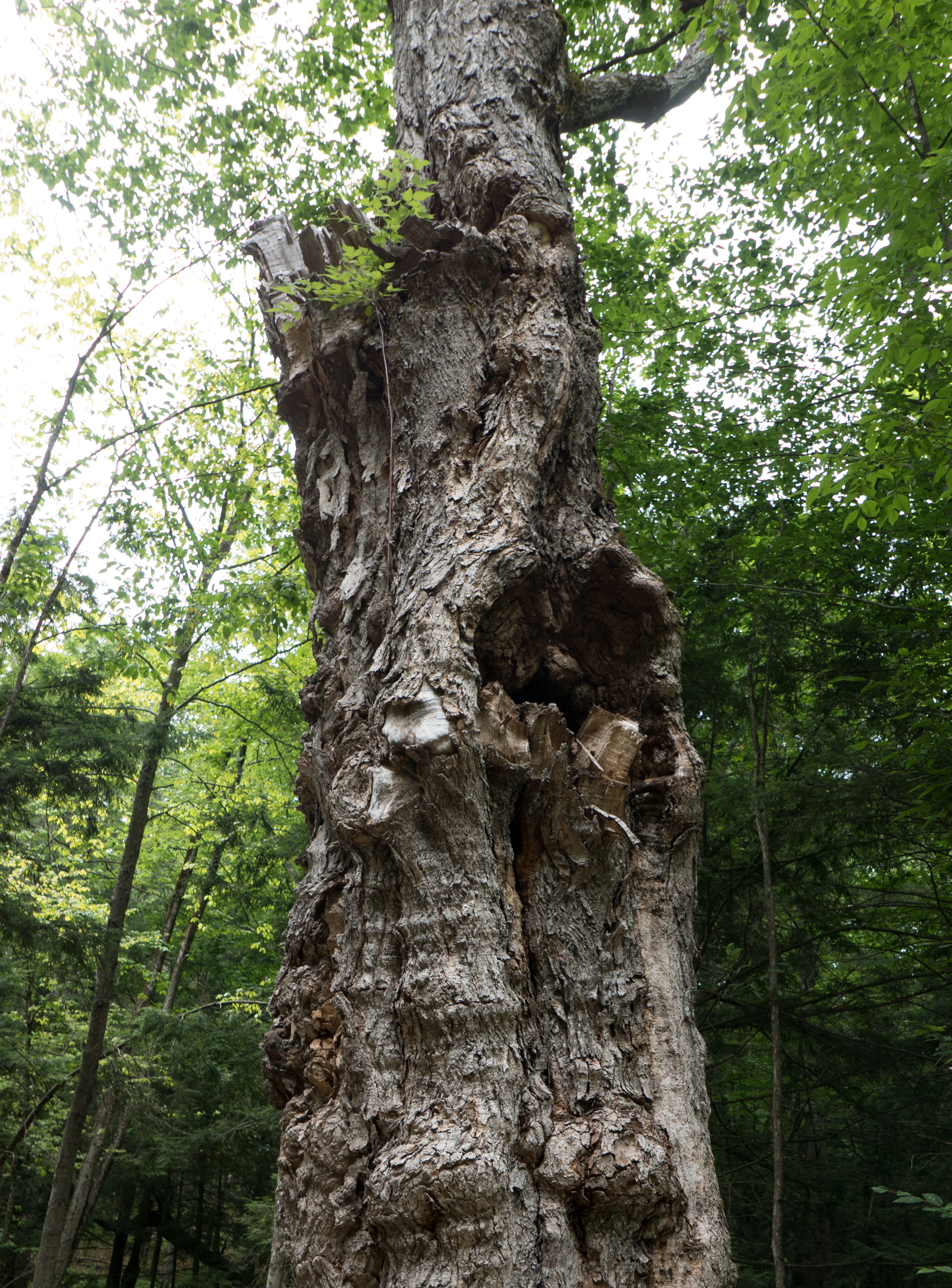 They had survived and grown wiser with age. Or if not wiser, at least more resigned to dealing with hardship. 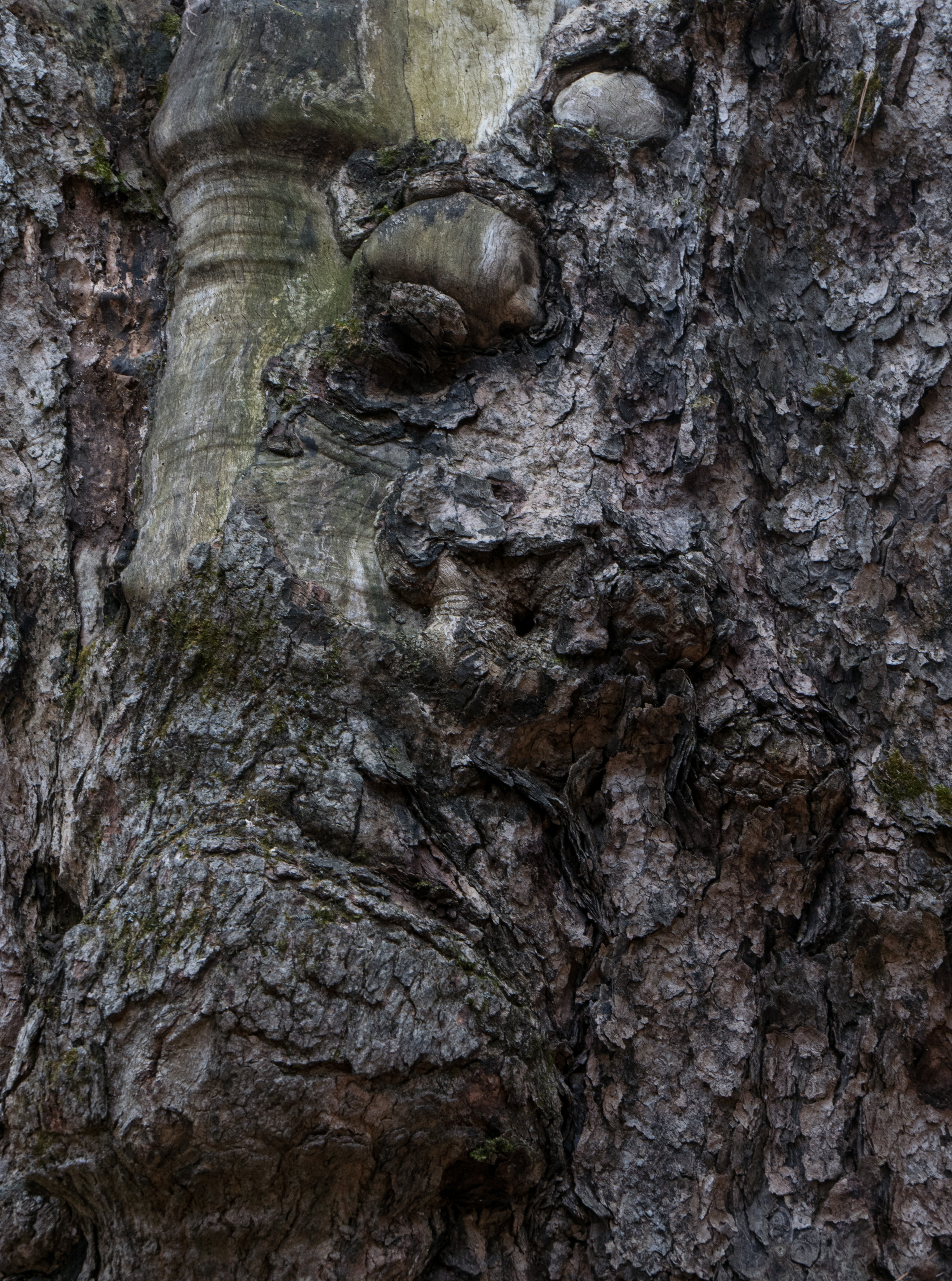 The sadness in this tree’s face almost makes me weep. It reminds me of some Biblical figure, a sculpture by an artist who also had suffered. Michelangelo perhaps?

I knew the trail would come out along a former farming road, lined with more ancient trees, to reach the climax, the rock outcropping and the newly dug pool. 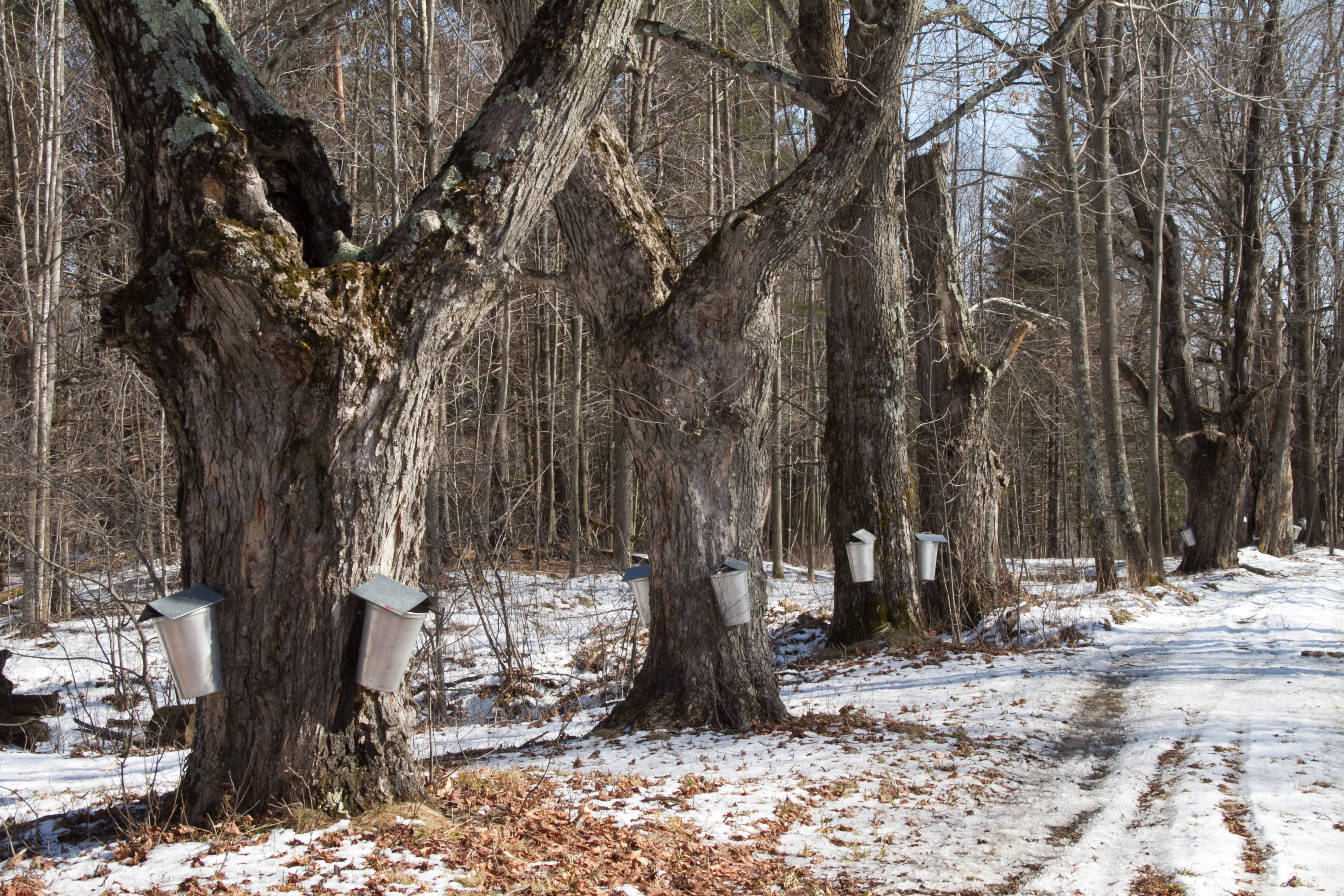 Even very old maple trees produce sap for maple syrup! We don’t tap these trees often but we did in 2017 when this photo was taken.

I knew where I wanted this new part of Timelines to go, but I had no concept that tied the pieces together in a way that satisfied me. Until finally, about a month ago, I did.

It happened, as it often does for me, when I found a name for the extension. Continuum. The name changed a cluster of ideas into a clear vision. I knew what I was trying to say and how I would say it.

Work began about two weeks ago and is going forward quickly.  Last week we cut brush to create a path into the woods. 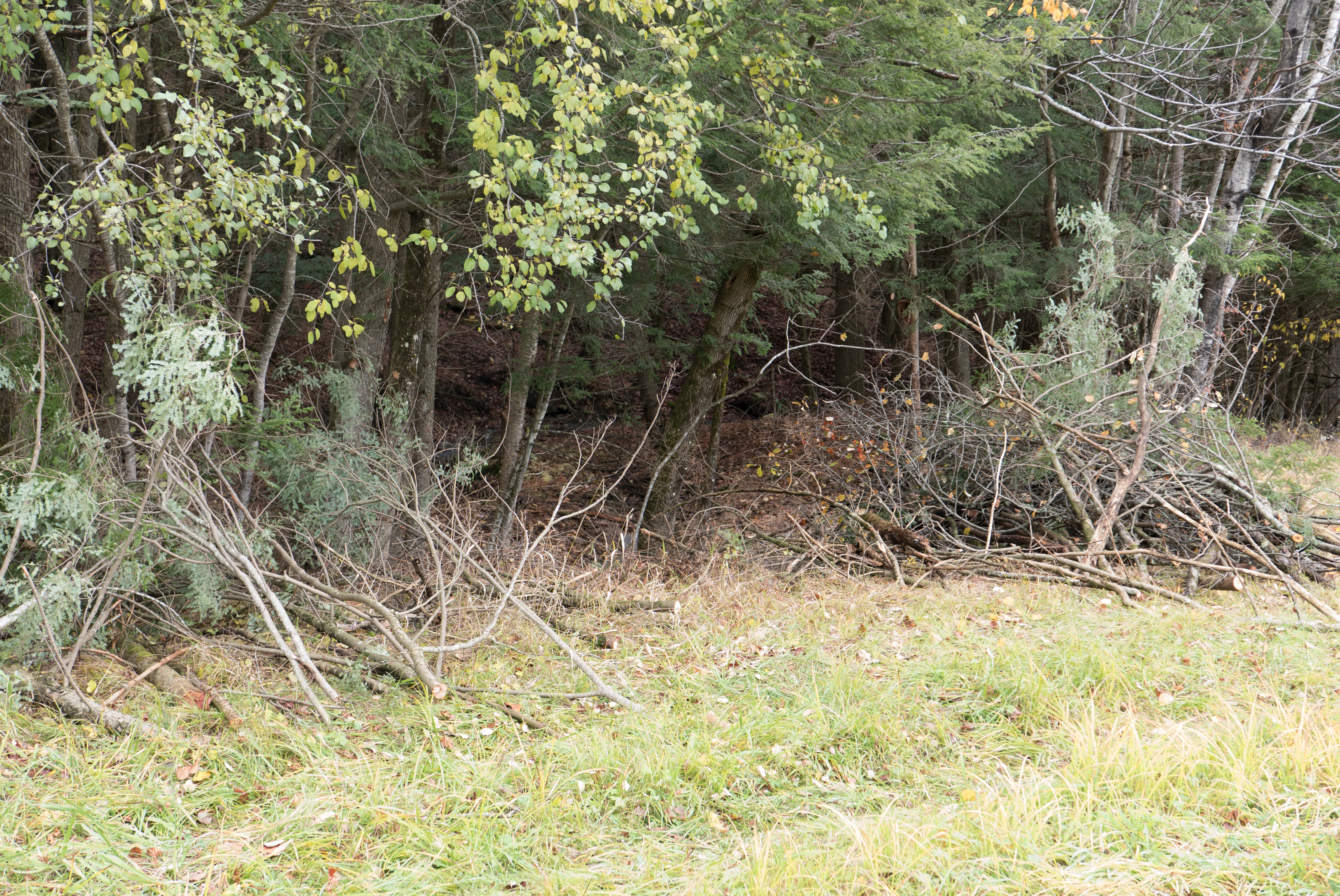 The path will skirt a stream which is impossibly beautiful at this time of year. 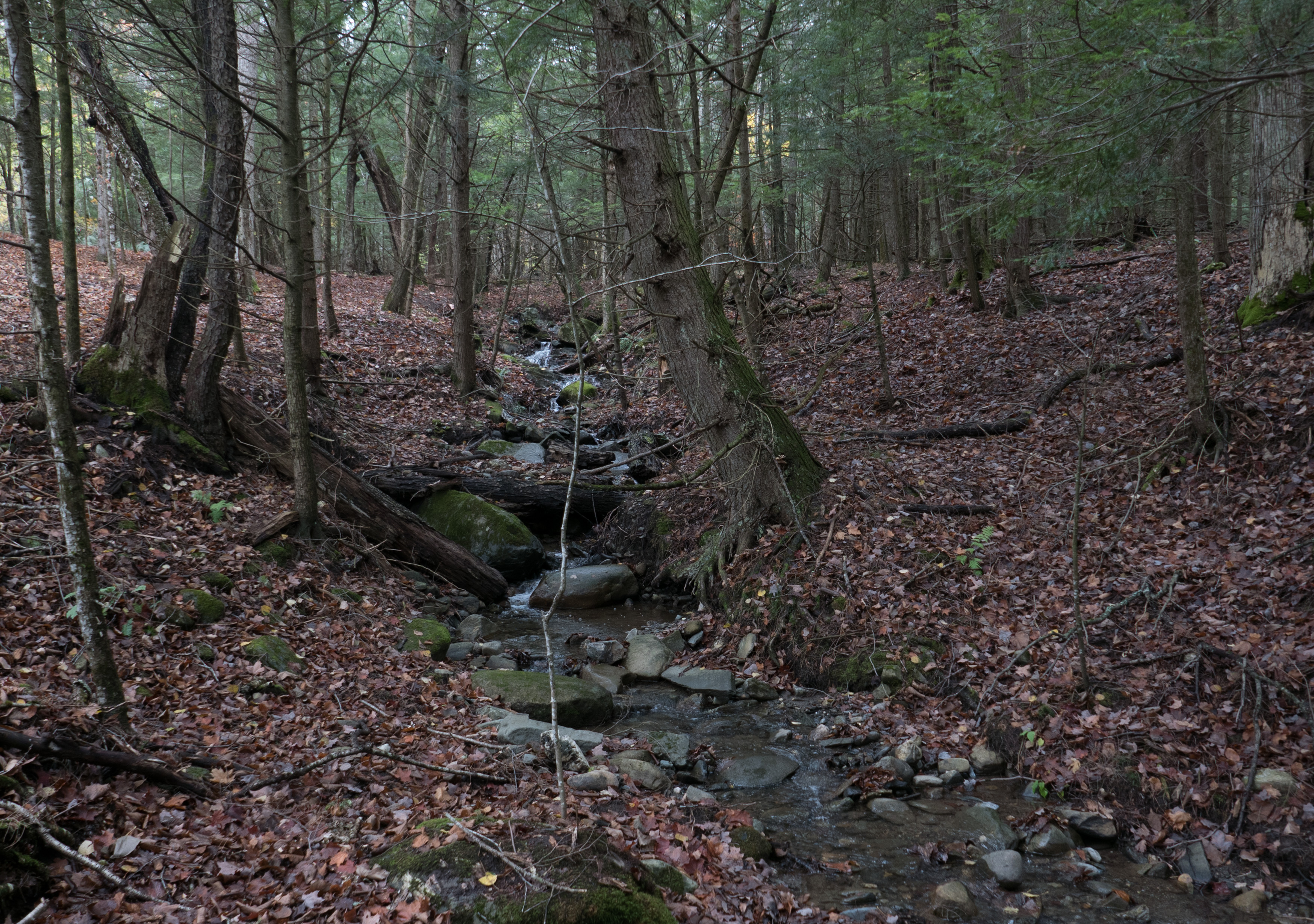 I took this photo to remind myself to remove that one small tree. Without it, the view will be even better.

My photos don’t begin to do justice to the site, and whether the water that is now tumbling over the tiny waterfalls will persist in drier seasons is hard to know. But even without it, the contrasts will be striking, ancient trees pointing a path for tiny saplings, immoveable boulders standing beside the smaller stones pushed into place by spring run-offs.

Last week Jacques Gosselin, one of two men who make all my work possible, built the wooden construction I designed that will identify this part of Timelines. It’s a nine-part cube where the letters that spell CONTINUUM will appear, arranged in one way on one side, in a different way on each of the others. 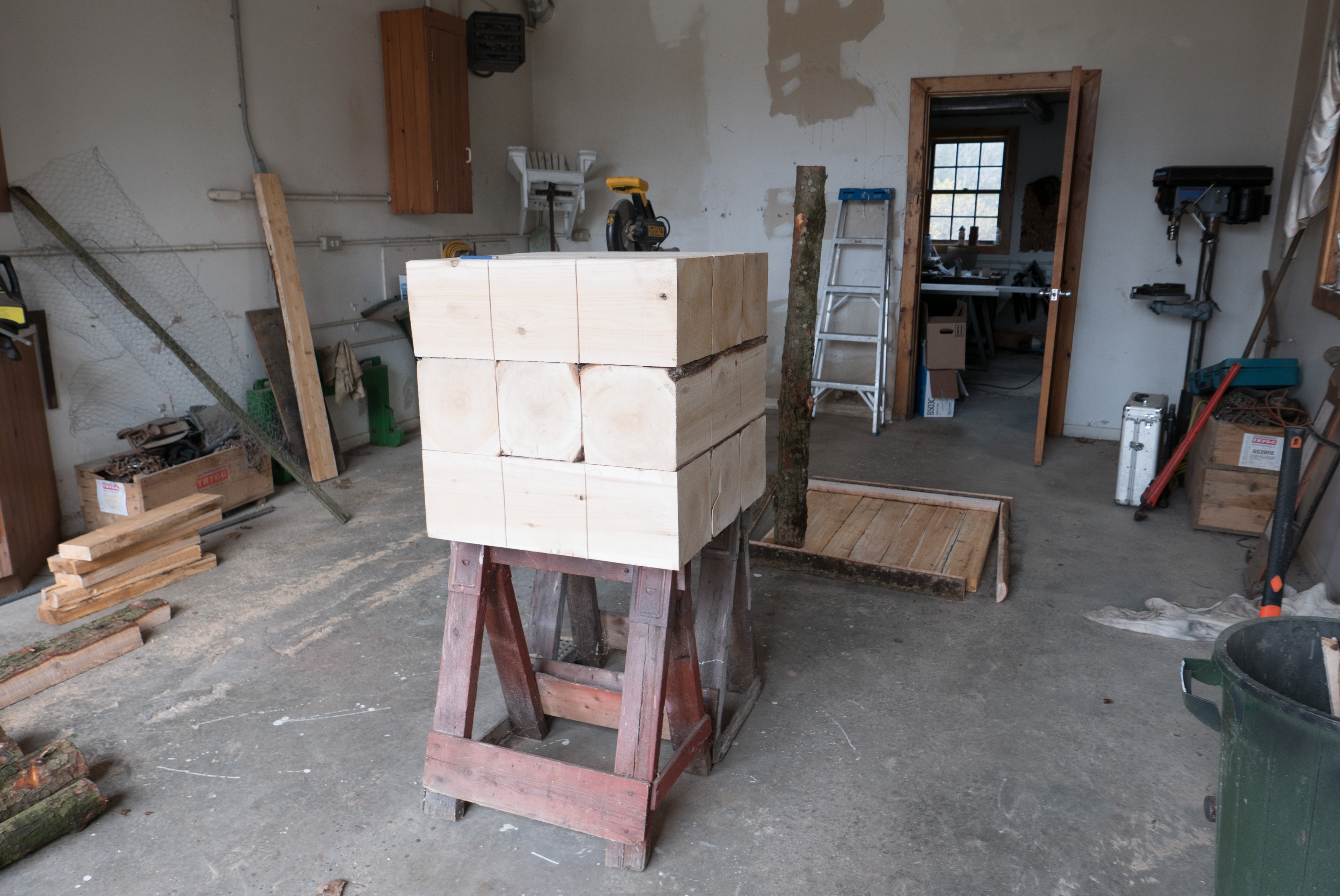 Letters will be burnt into each 8″ square block, on all four sides and the top.

I pulled out boulders from an old rock pile and, with help from my friend John Hay, sketched out the design I will drill into them over the winter. 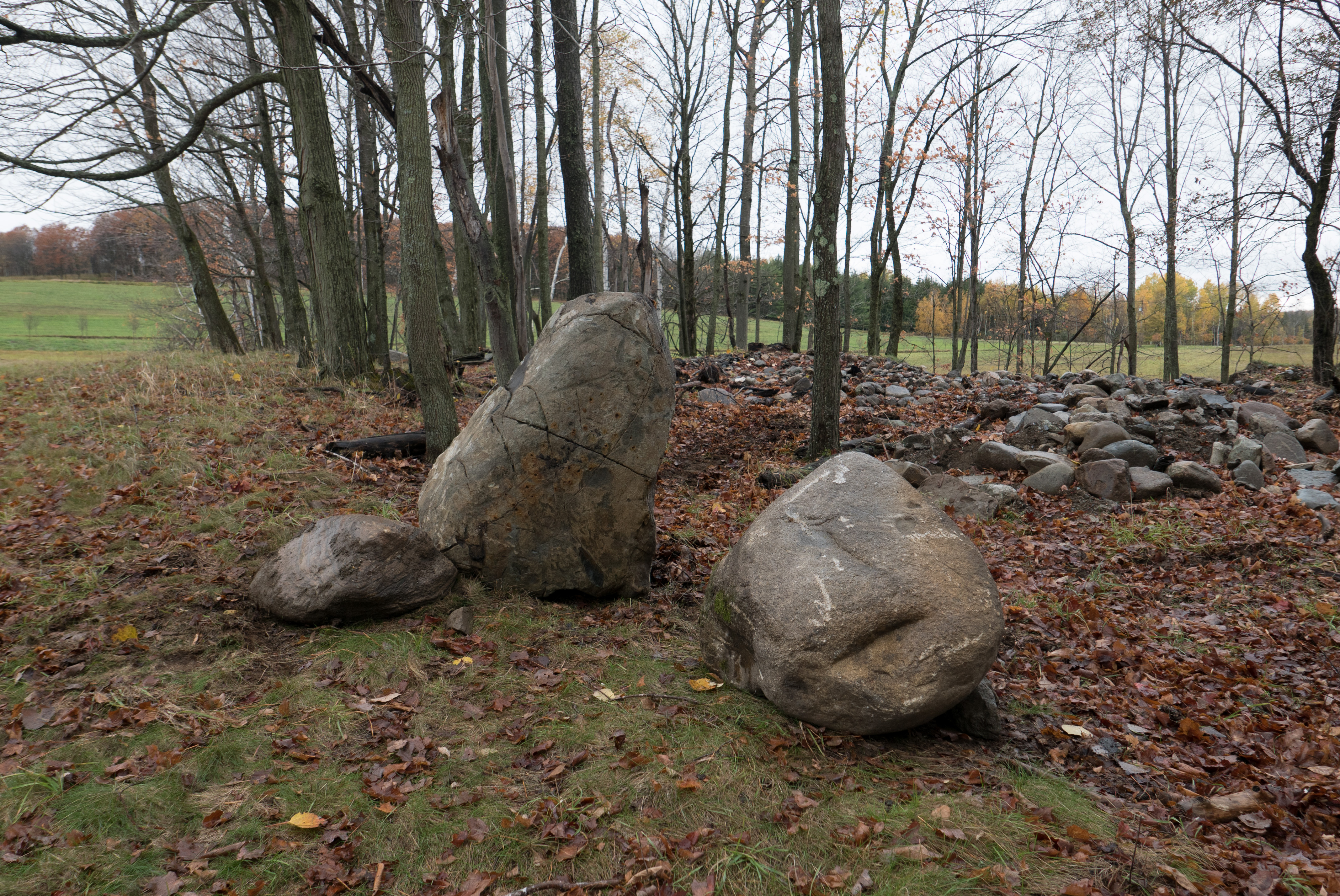 That design is based on the samaras, or keys, that contain the seeds of maple trees. 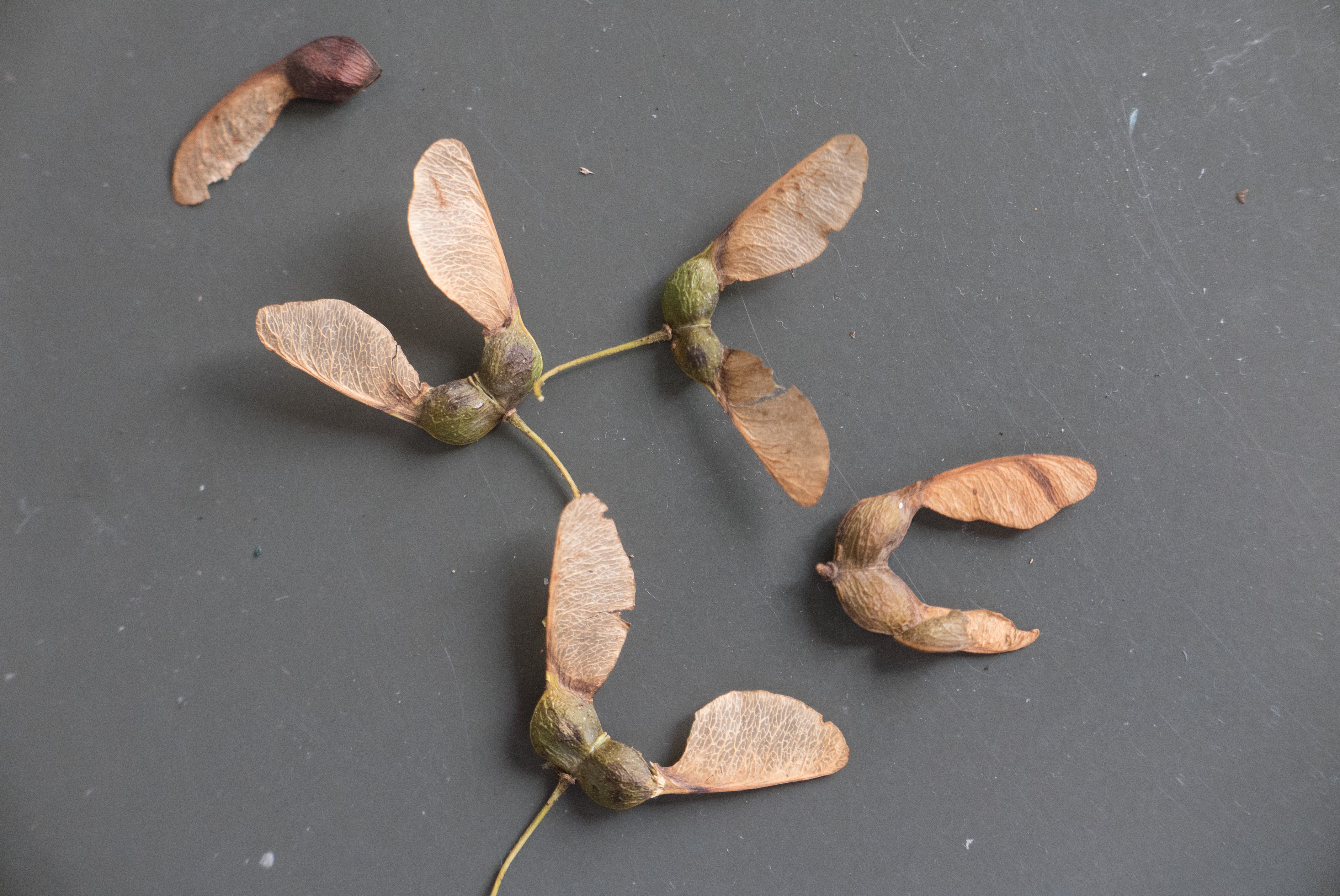 This is simply a random arrangement of maple keys, or samaras. Their winged form is the starting point of the design I’ll incise in the boulders.

Come spring, we’ll set the boulders near the rock outcropping which was the starting point for the trail.  It looks very different now than it used to. And like the stream, the water level will rise and fall, as the seasons dictate. 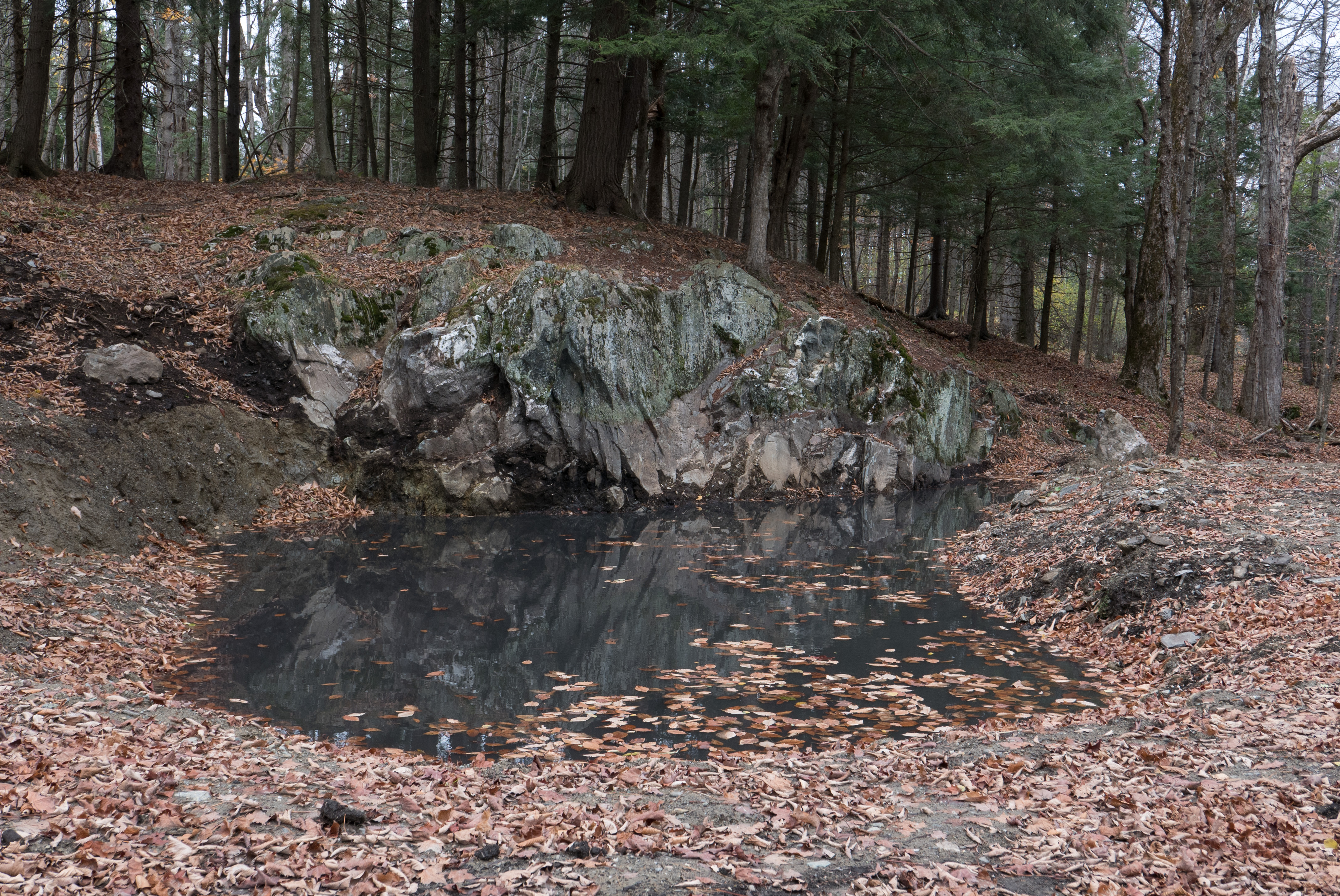 That change in the water level is fitting, as satisfying as the project itself. Together with the samaras and the ancient trees, it reflects the natural forces that the word Continuum describes.

This project should be finished by next summer when, once again, we will open the garden to the public. I hope to see you then!

Pat, what a beautiful trail, and that new pond at the foot of the rocks! Wow. How wonderful. Can’t wait to see your art here.

Thanks, Alyse. I’m really happy with the pool and the way the trail is coming along. I couldn’t wish for better.

“I pulled out boulders from an old rock pile” Did you really, Pat? With machinery? Or did you have someone else pull them out? And are you really going to do the drilling?

Oh yea of little faith… Yes, machinery driven by another lifted the boulders out of the rock pile and into the field. And yes, I do plan to do the drilling myself.

No, I haven’t. It may turn out to be too hard physically for me but I am really eager to try and have my second lessons scheduled for next week.

So wonderful, Pat! The final photo of the pool and boulder — amazing. I truly hope that I’ll be able to visit next summer to see it first-hand. I’m counting on it.

I hope so, too, Lisa. If you are, it will be a pleasure to see you again.

Good news is coming soon, I hope, about how I’ll be able to share the garden…