Containers That Match Your Mood 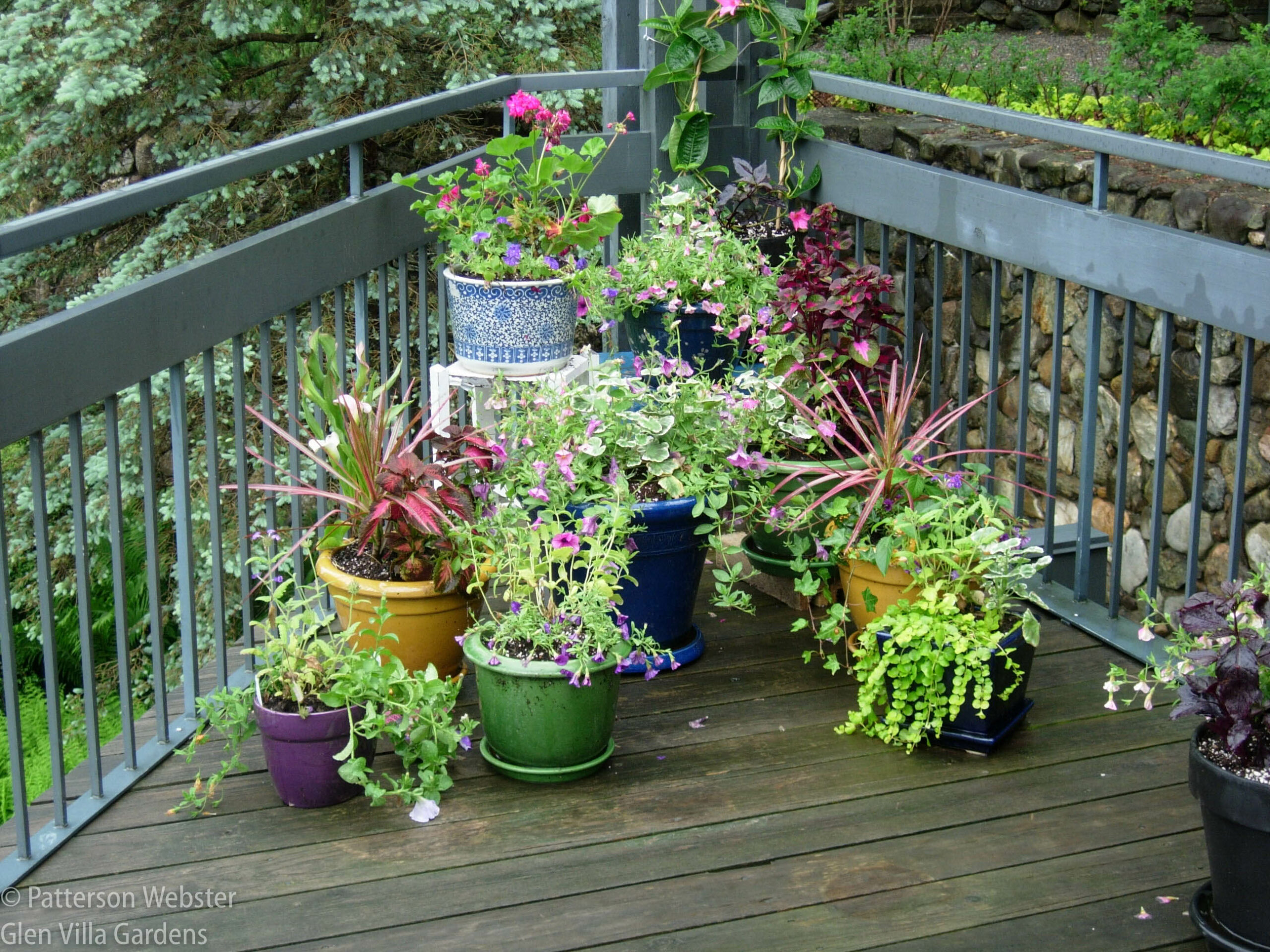 Recently a friend asked if I’d written about container gardening. Her question started me thinking about how the plants on the decks around our house have changed over the years. I pulled out old photos to see if my memory was accurate. Yes, the choices I made had changed. And while that wasn’t really surprising, what I noticed most was that the differences year to year reflected changes not only in my experience but also in my emotions and moods.

Decks surround Glen Villa, our house and garden in Quebec, offering lots of space for containers. The deck beside the living room ends in a sharp point and shortly after moving into the house, I began to fill this corner with plants in pots. The earliest photo I found was from 2005. 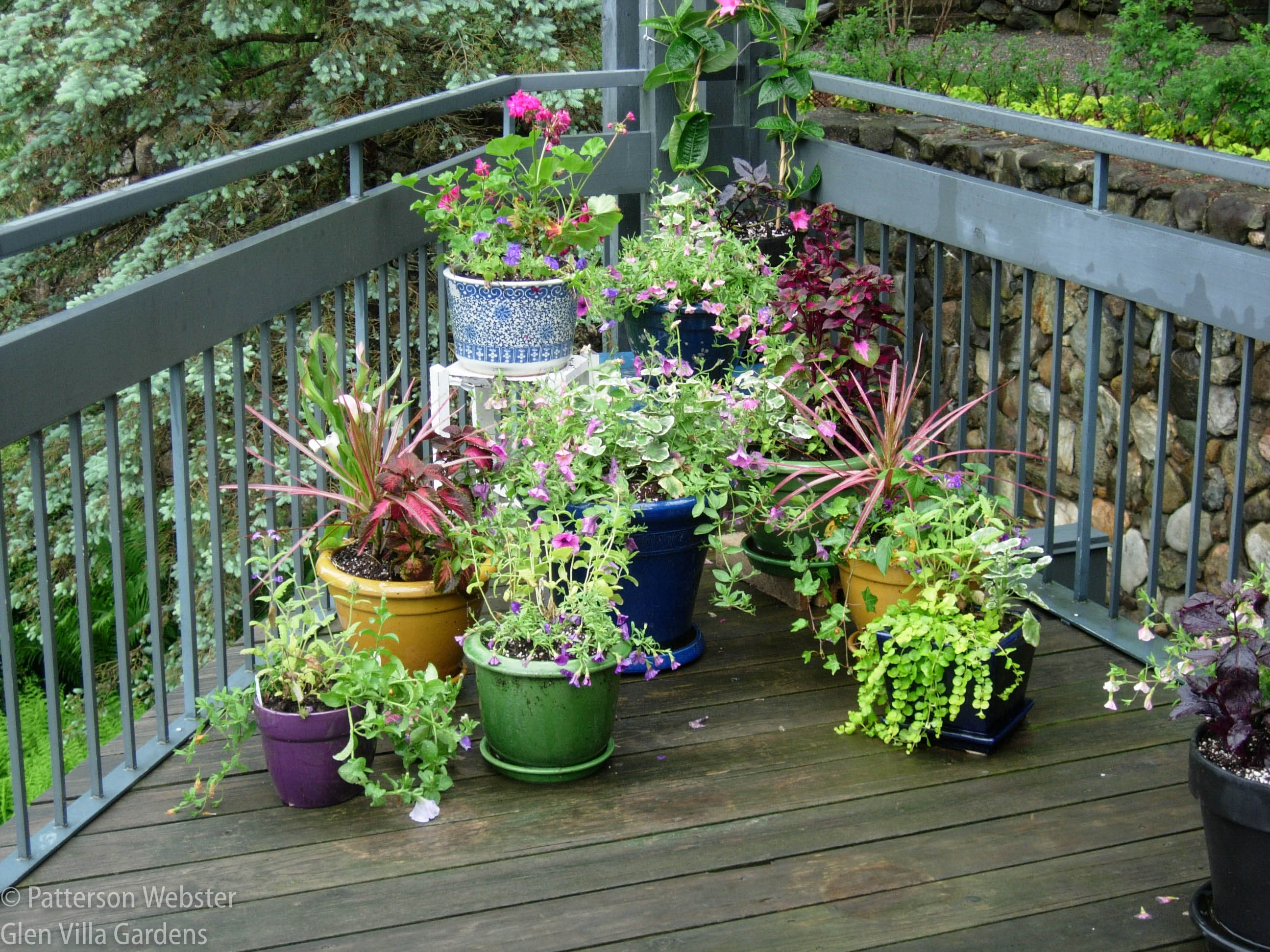 This motley collection of  pots is filled with plants that haven’t yet grown tall enough to hide the point of the deck behind them.

Two years later, I was feeling more adventurous and more cheerful. Or at least I think I was — there certainly were more pots in the corner and all together the arrangement was more colourful. 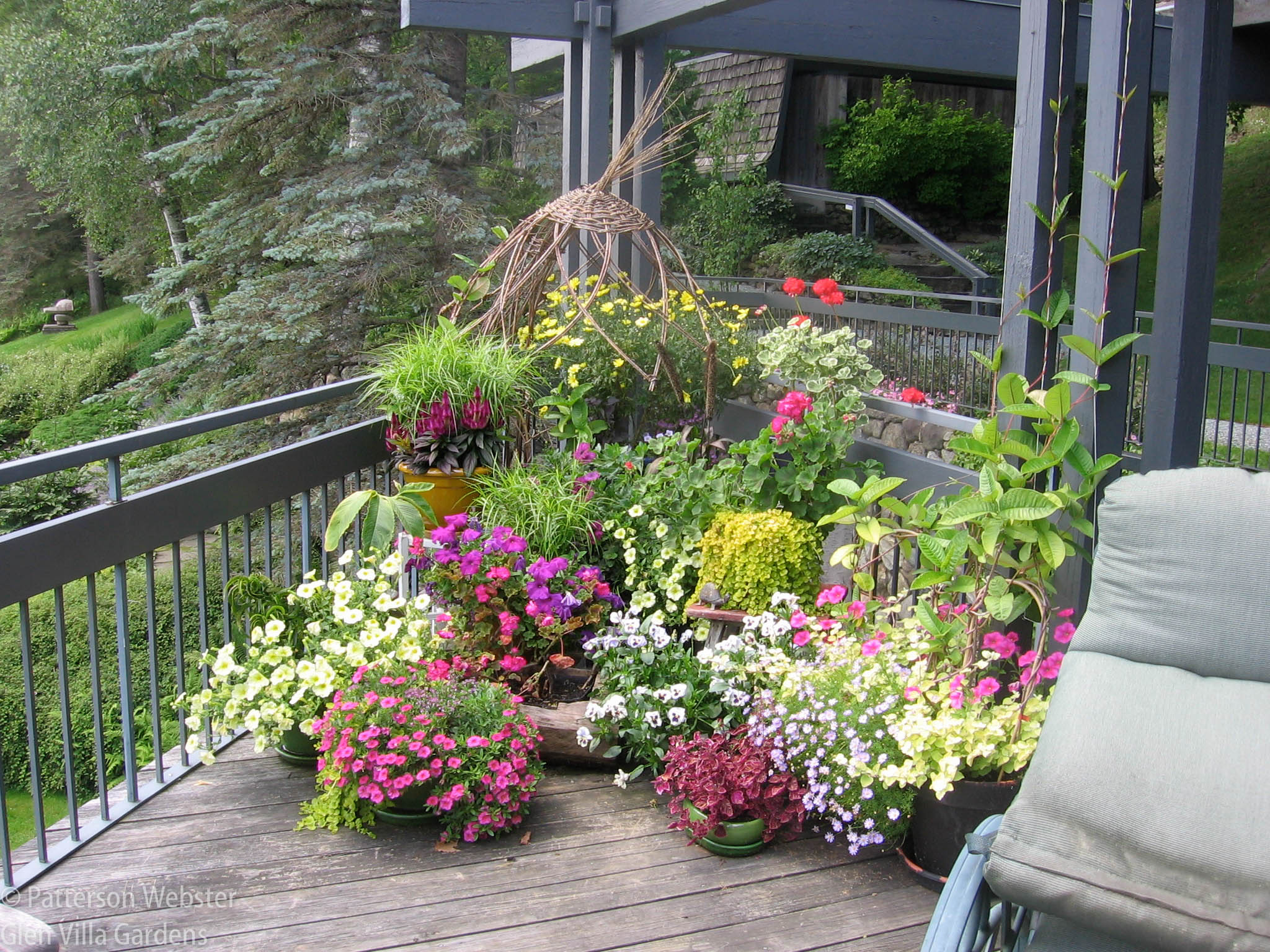 A woven straw ‘hat’ that I bought at the Reford Gardens in Métis, Quebec, is the backdrop for this arrangement from 2007.

By 2009, I must have been in really high spirits. I mean, just look at the array of plants — full blown technicolour. 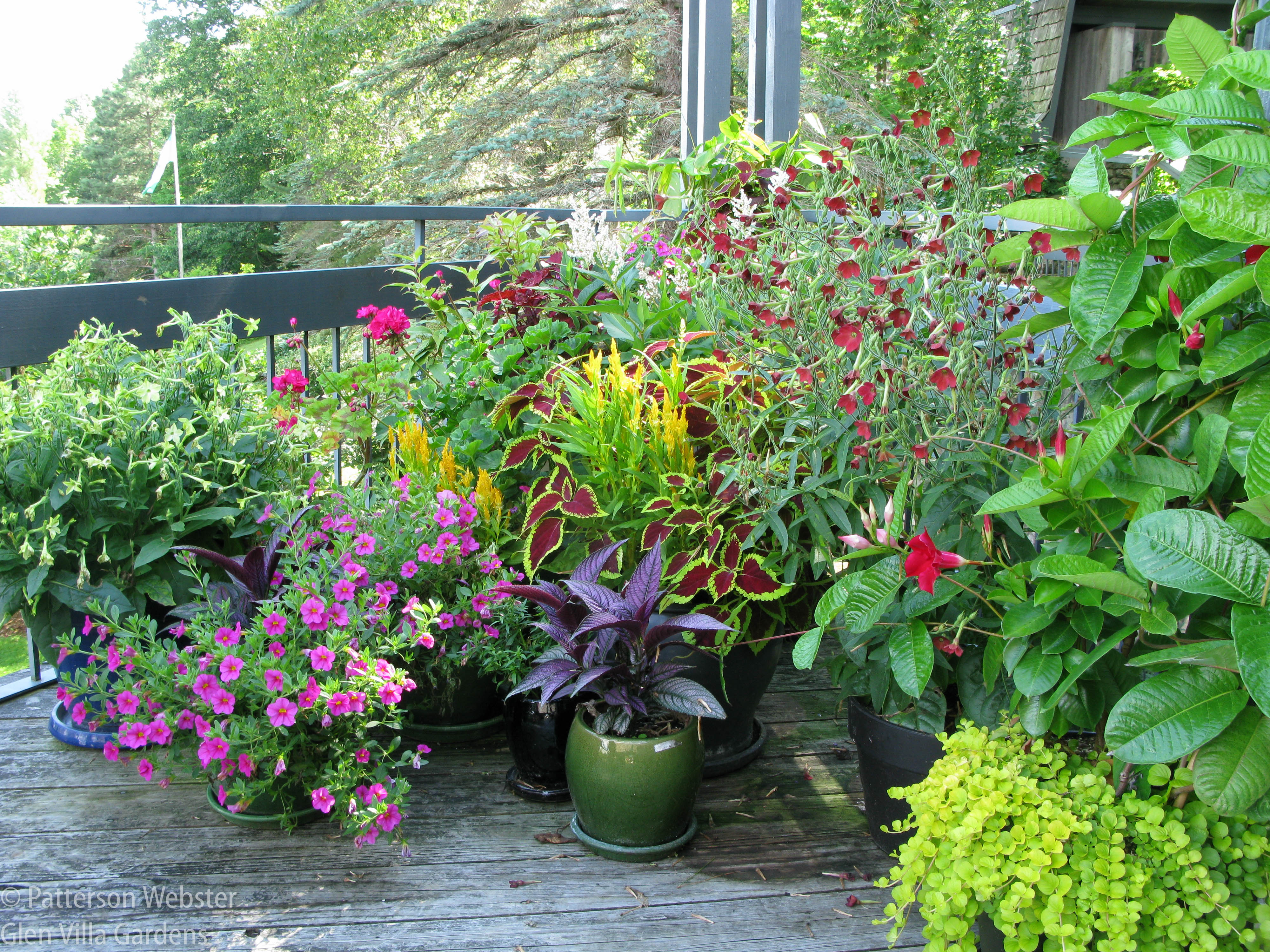 How many different plants are there? I count at least nine, including the Mandevilla vine on the far right.

Two years later still, in 2011, was I feeling less enthusiastic? There were fewer pots and fewer flowers … 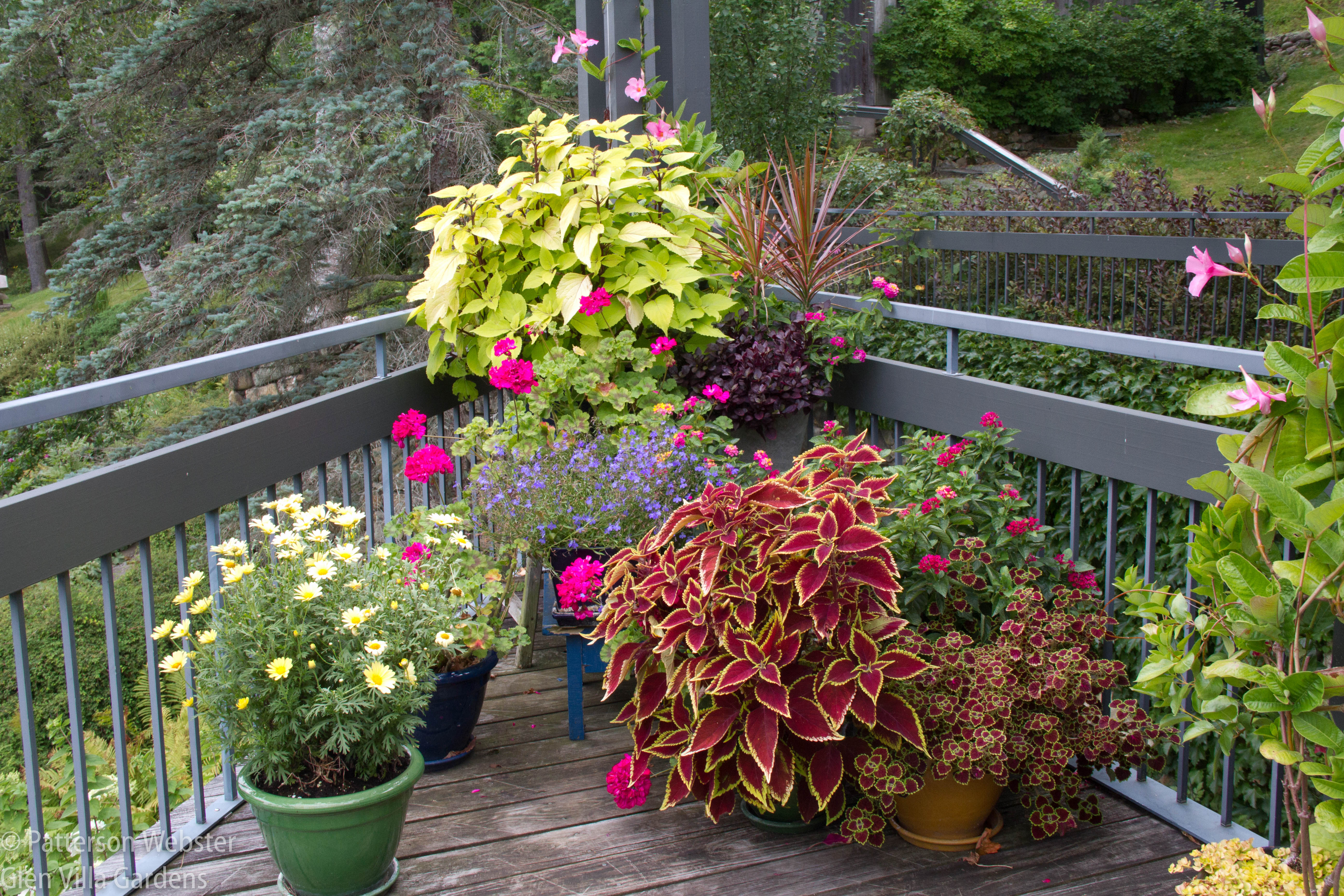 The pink Mandevilla vine is still there on the far right, plus geraniums, daisies, coleus and more.  .

… but only because I was planting another area on the deck as well. 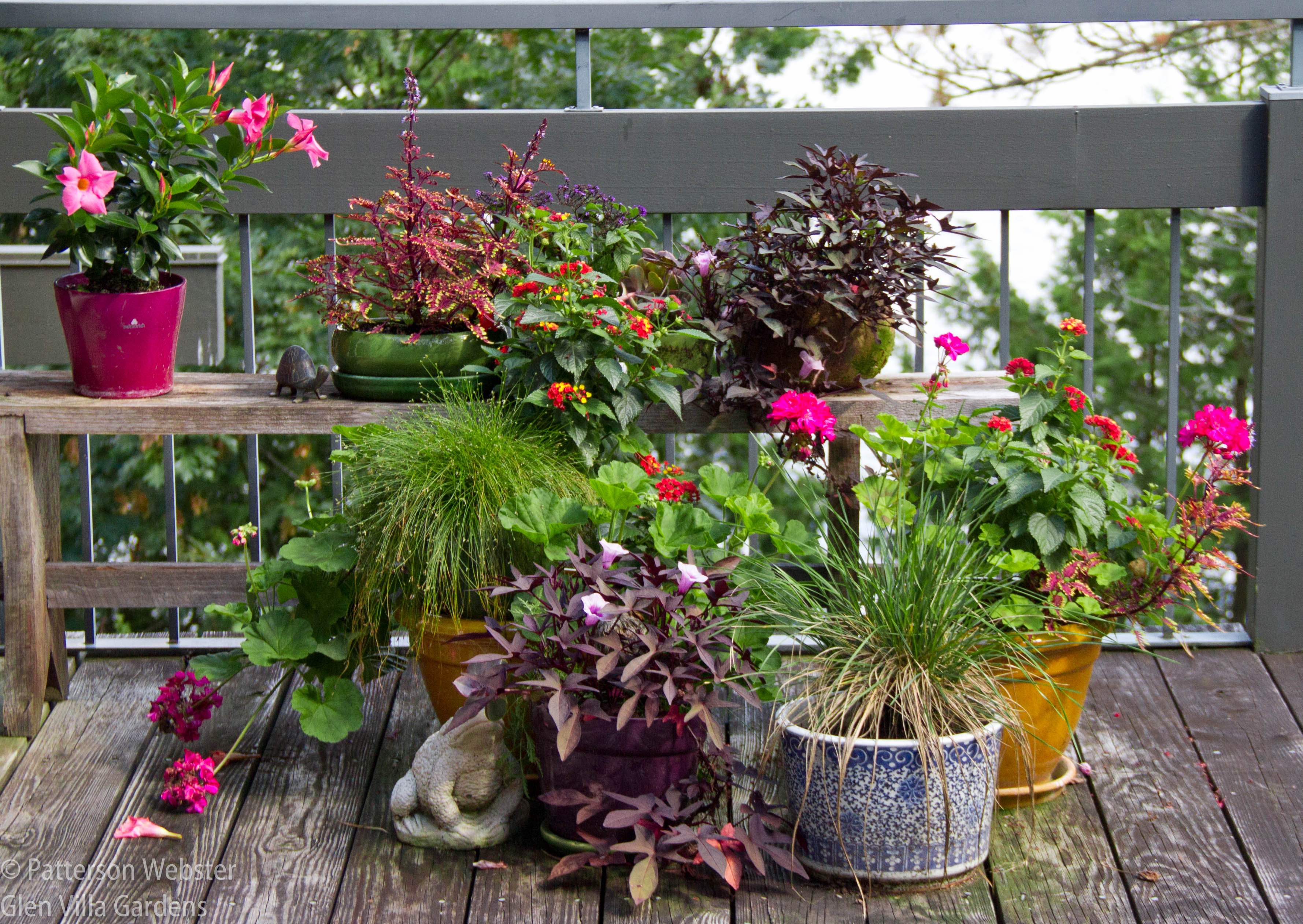 Do you recognize the blue and white Chinese pot? It was in the photo from 2005.

By 2015, a mustard coloured Chinese pot added a focal point, reducing the number of plants. And I seem to remember that by that time, after ten years of planting the point on the deck, I was getting tired of doing the same old thing, again and again.

A collection of spiky plants may have matched my mood that year.

The following years confirm that suspicion, since the number and variety of plants I used kept going down. Now, in 2019, white Mandevilla vines are the only plants on the living room deck, and their white blossoms are cool and serene. 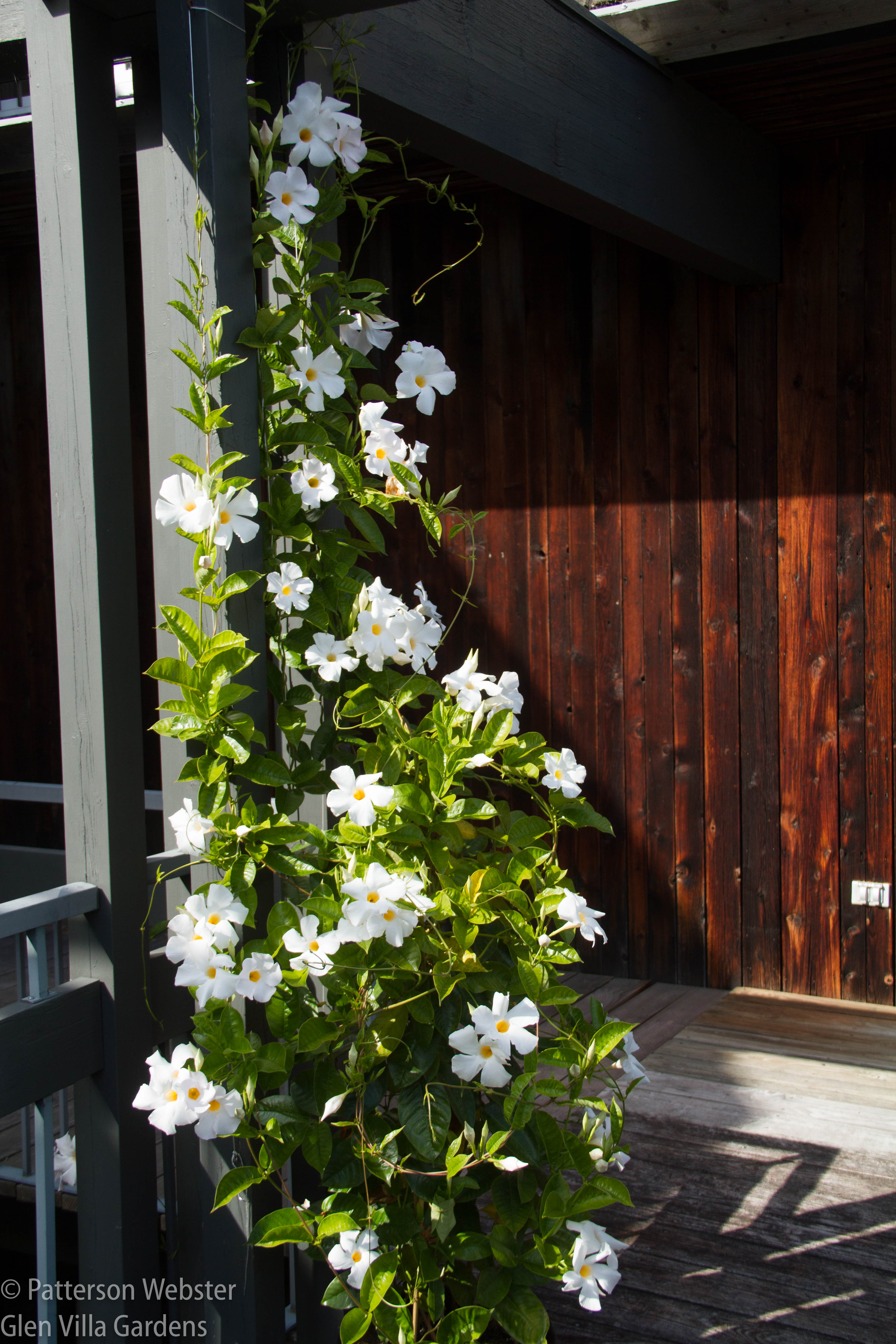 There are four white Mandevilla vines blooming in pots on the living room deck. I used to have pink ones but I’m happier now with the white.

The same sort of arc, like a bell curve mounting from enthusiasm to exuberance to restraint, occurred on the deck beside the dining room. It morphed from this in 2006 … 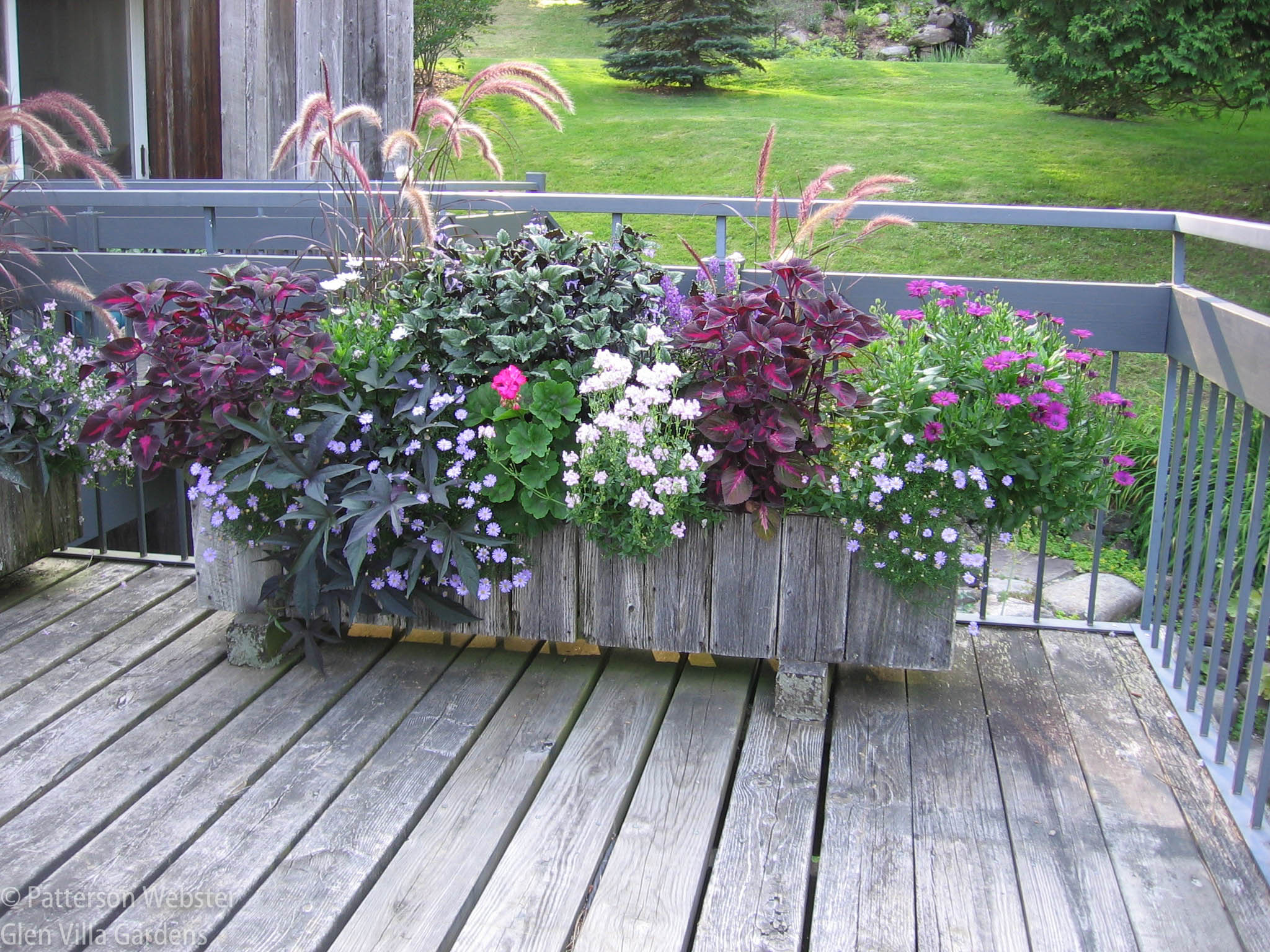 The mix of colours and textures isn’t bad but those grasses throw everything off balance. 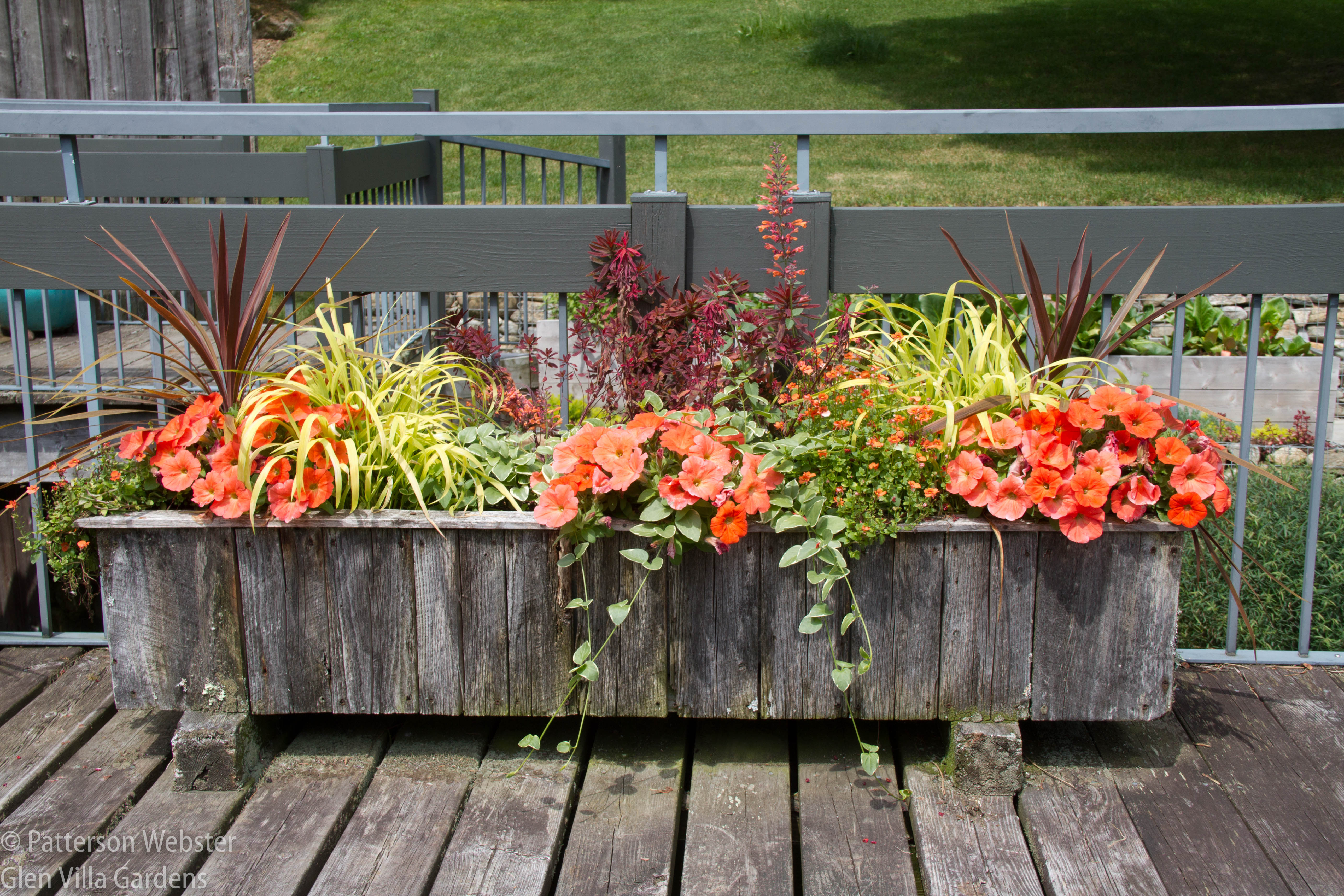 I still love this colour combination. Although it doesn’t show up, curly parsley in the front gave the planter a frilly skirt .

to this a year or two later. 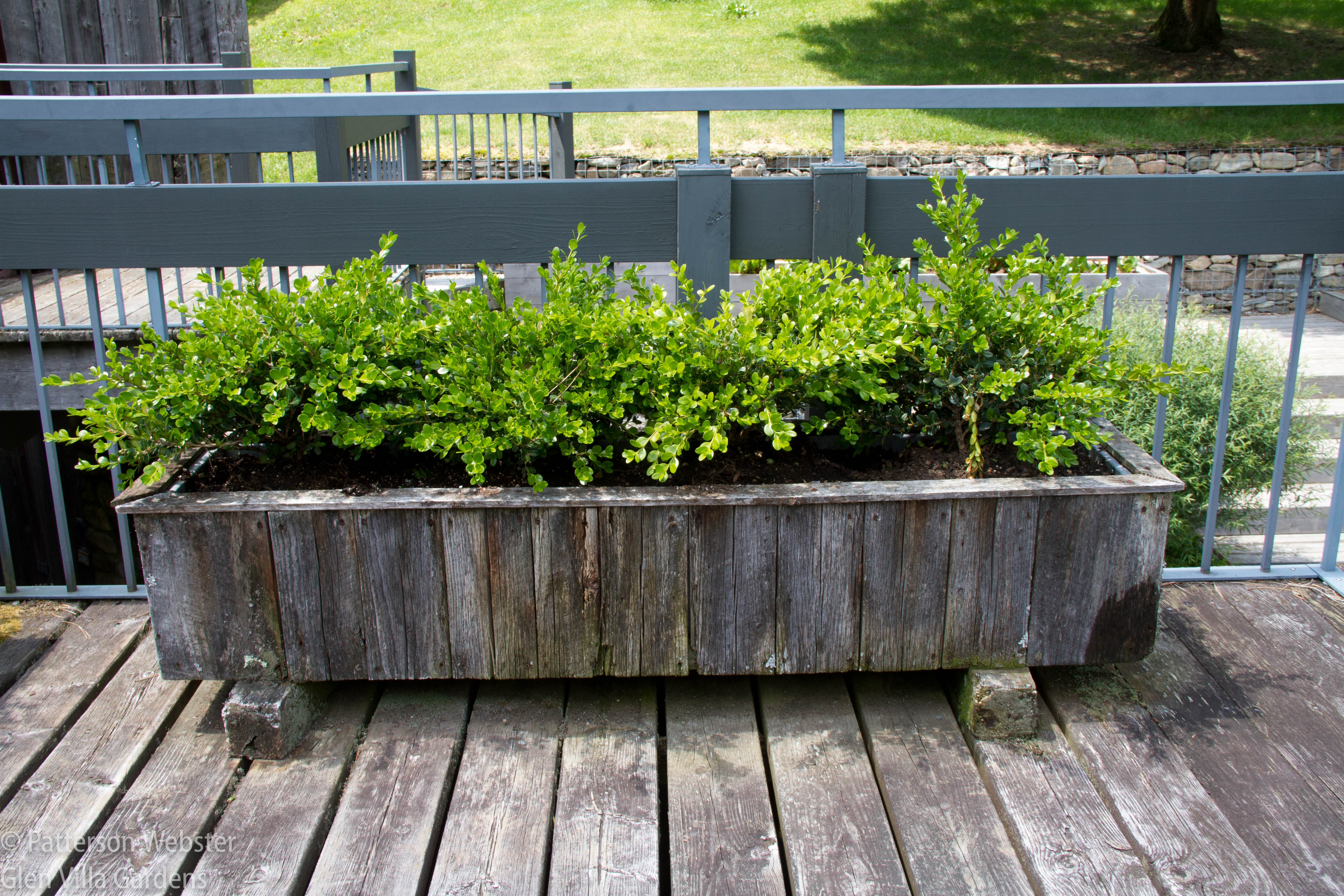 Life felt overwhelming one year so I simplified and calmed things down, planting boxwood only.

The planter by the kitchen door is shaded for most of the day, so over the years the flowers I’ve chosen to plant there have, of necessity, been shade lovers.  Is it because of that limitation that the overall design of the planter has remained relatively consistent? The colours and textures of the plants have changed but not the composition — two or three annuals or perennials that caught my eye at the start of the season, with at least one bright colour to light up the dark.

Miraculously, with regular spraying the deer left these hostas alone. We transplanted them at the end of the summer, and the deer thanked us the following year.

Sometimes the random nature of my choices means that the planter was successful throughout the summer…. 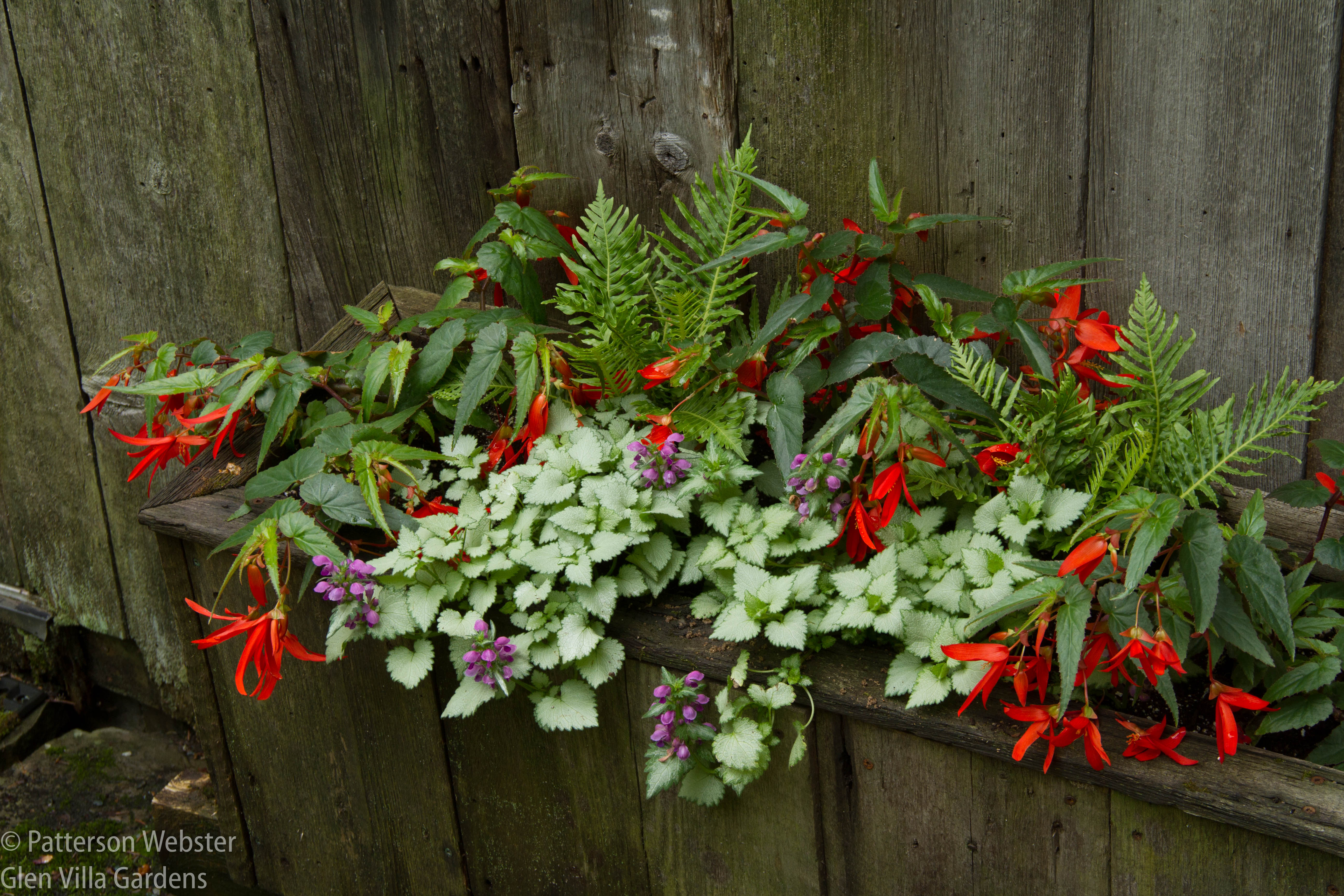 This combo worked well from late May to late September.

…and sometimes it didn’t. The planter below looked sparse when first planted but nicely full by the time of my son’s wedding in July. Then for most of August, it just limped along. 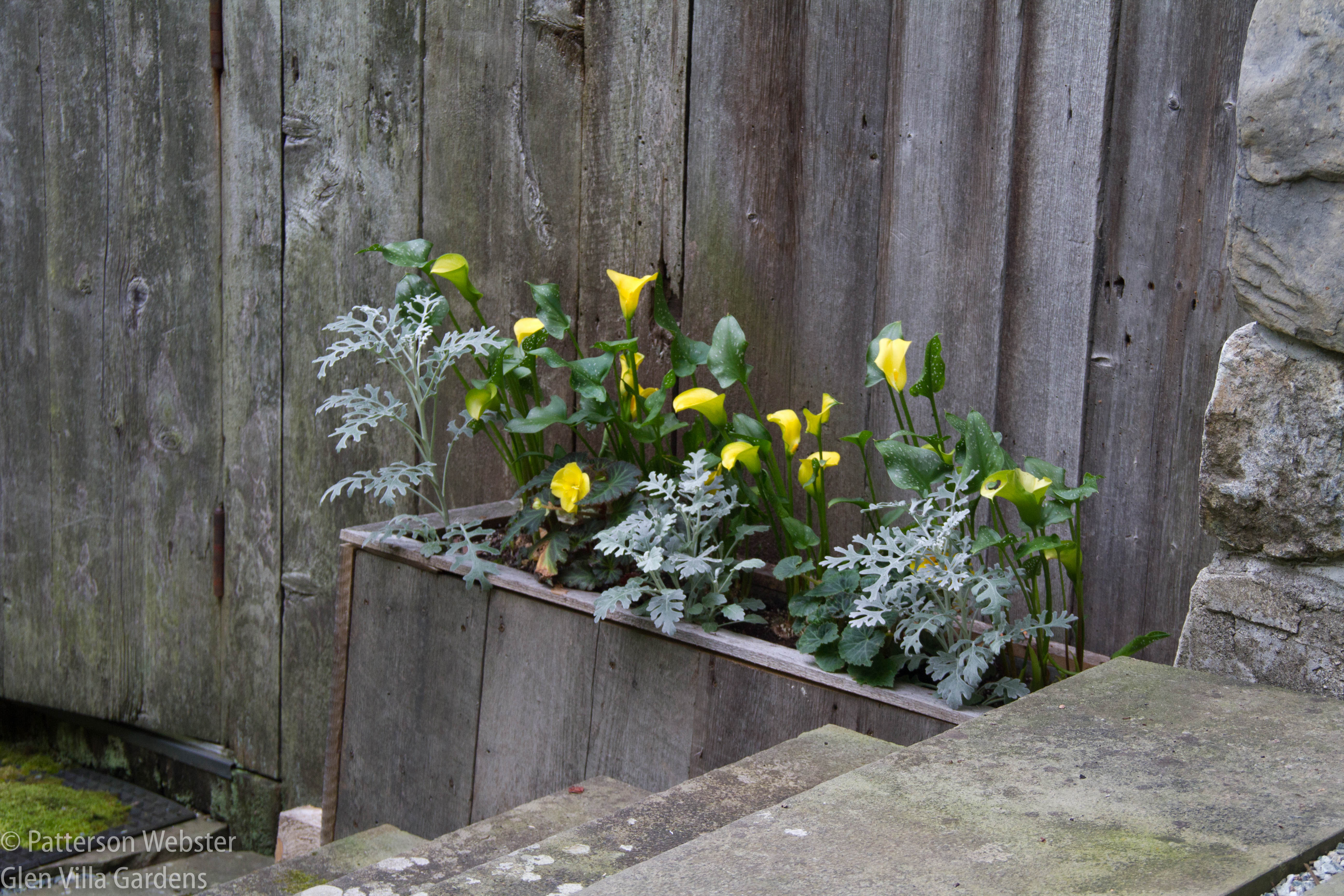 The combination of silvery grey and yellow matched the colours chosen for the wedding. The yellow calla lilies shone like sunbursts.

This year’s plants have been a pleasure all summer. Touches of white on the yellow begonia complemented the starry white flowers beside it, and the bird’s nest found in a branch pruned from a nearby spirea added the off-centre focal point that I like in a rectangular planter like this. 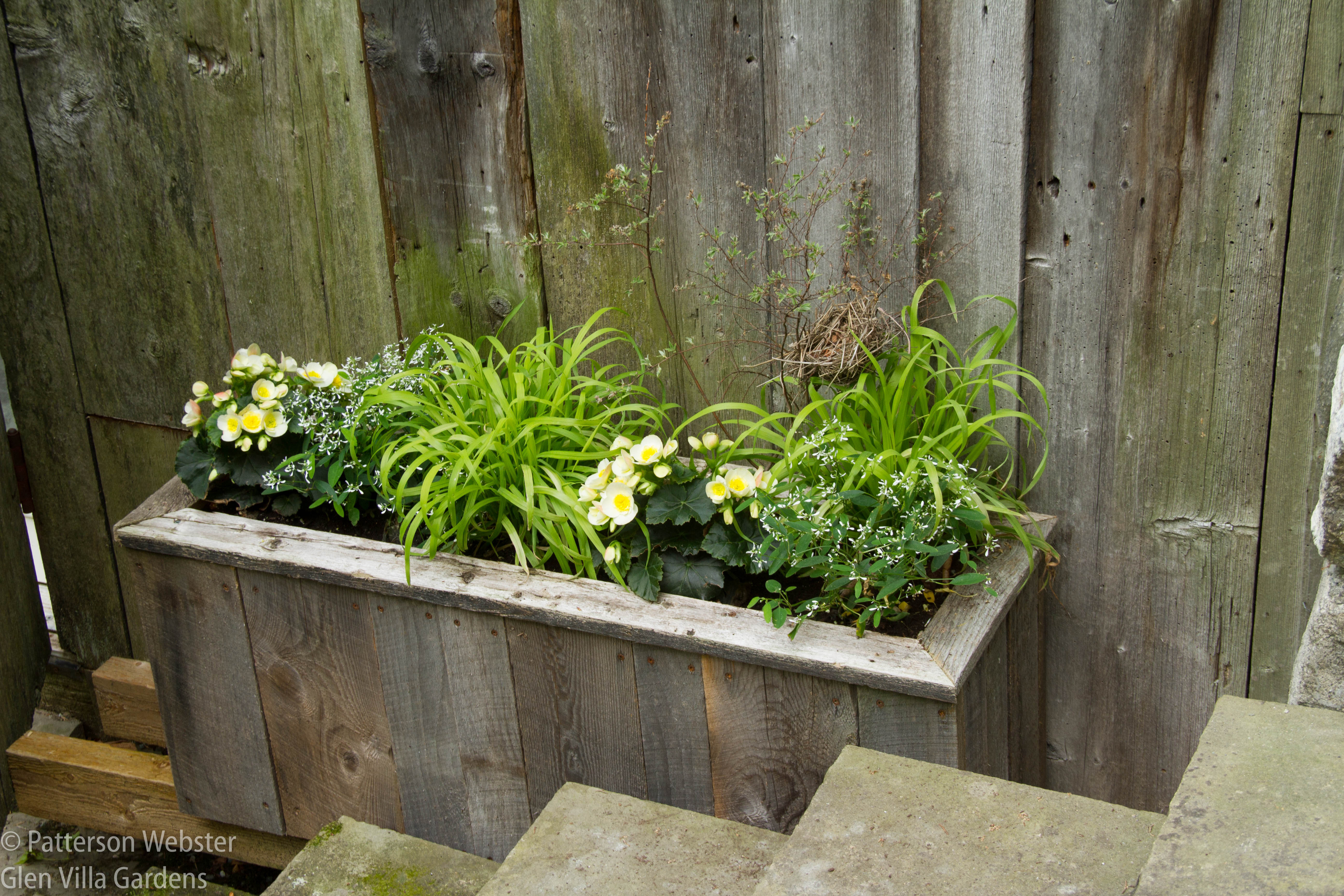 This summer’s choice: two perennial grasses, begonias and — what is the name of that nice white flower? I don’t remember!

Now, three months after planting, the leaves have disappeared from the spirea. The begonia is starting to look past its best but the planter as a whole is still just fine. 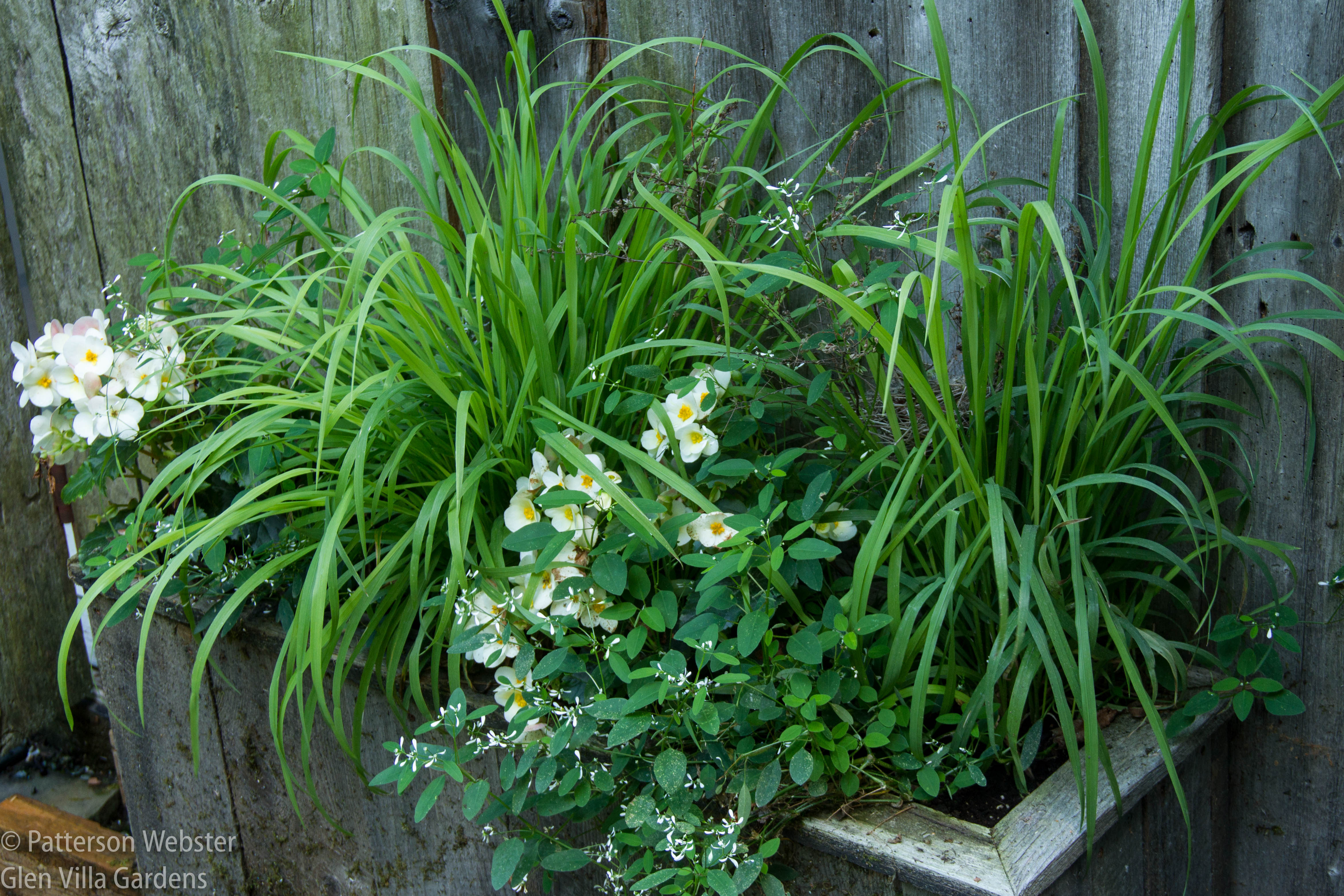 The bird’s nest is still there, but is hidden now behind the cascading grass.

Looking back through the years, I found only one set of pots I miss… a simple planting with Ricinus. 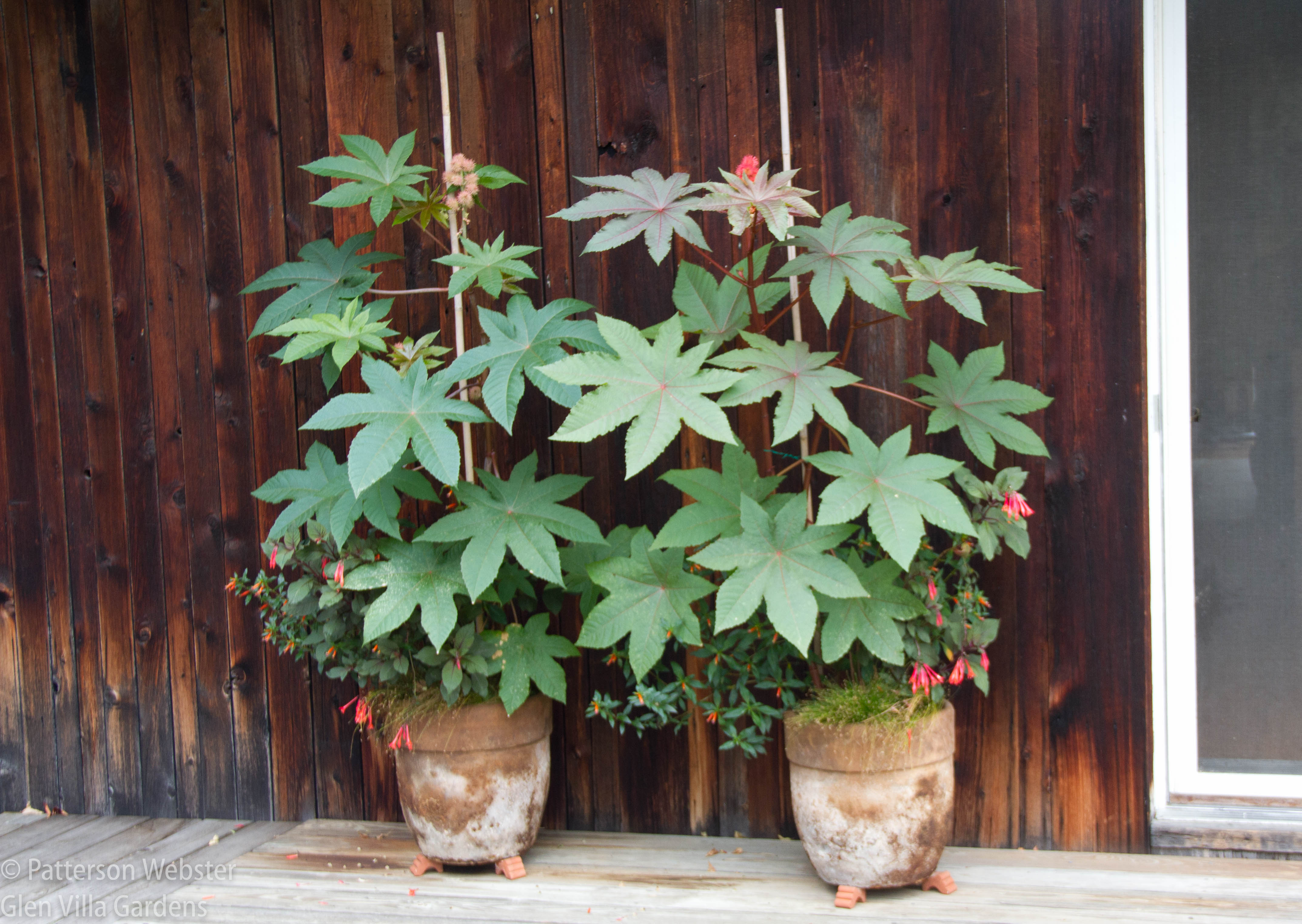 The pots need a good cleaning and I would like the stakes to disappear, but I think the big leaves look fabulous against the dark brown wood, and the little bits of fuchsia at the base echo the red flower about to appear.

Do you plant containers? Do you change what you plant from year to year or do you repeat a design you are happy with?

Are you on Instagram? I’m posting there now and would enjoy seeing your photos. You can follow me at glen_villa_garden for photos of what’s happening in the garden.

Great fun to see the diversity of plantings in your containers over the years – I don’t have as many containers as I used to — but have always changed them periodically, from perennials to herbs to woodies. Those weathered wood containers are beautiful!

I find it boring to do the same thing year after year but finding a new way to fill familiar containers takes effort. The wood planters came with the house — we are lucky to have them.

All in all things look like they did pretty well this summer!

Yes, it was a good year.

Unless you have drip irrigation or hire a gardener, containers need regular tending. My guess would be that the years when containers were sparser, you were busier. And I think many of us tend to streamline and simplify as we get older. So did the containers change because of your mood–or your circumstances? I confess, by the end of the season I’m sick and tired of watering containers! But I never seem to remember that at the start of the season!

As always, Kathy, you make some good points. Yes, containers need regular tending and that streamlining comes with age. So circumstances definitely played a role. But I know that the year I planted boxwood only on the dining room deck I was feeling overwhelmed… can’t remember now, though, why. Which is probably a good thing!

The Ricinus look fabulous. I myself like very colorful pots – love the red Nicotiana in the third photo down.

I went off colour for a while (no, not rudely off colour, as in jokes) but this year colour is back in full force in the planter on the dining room deck.