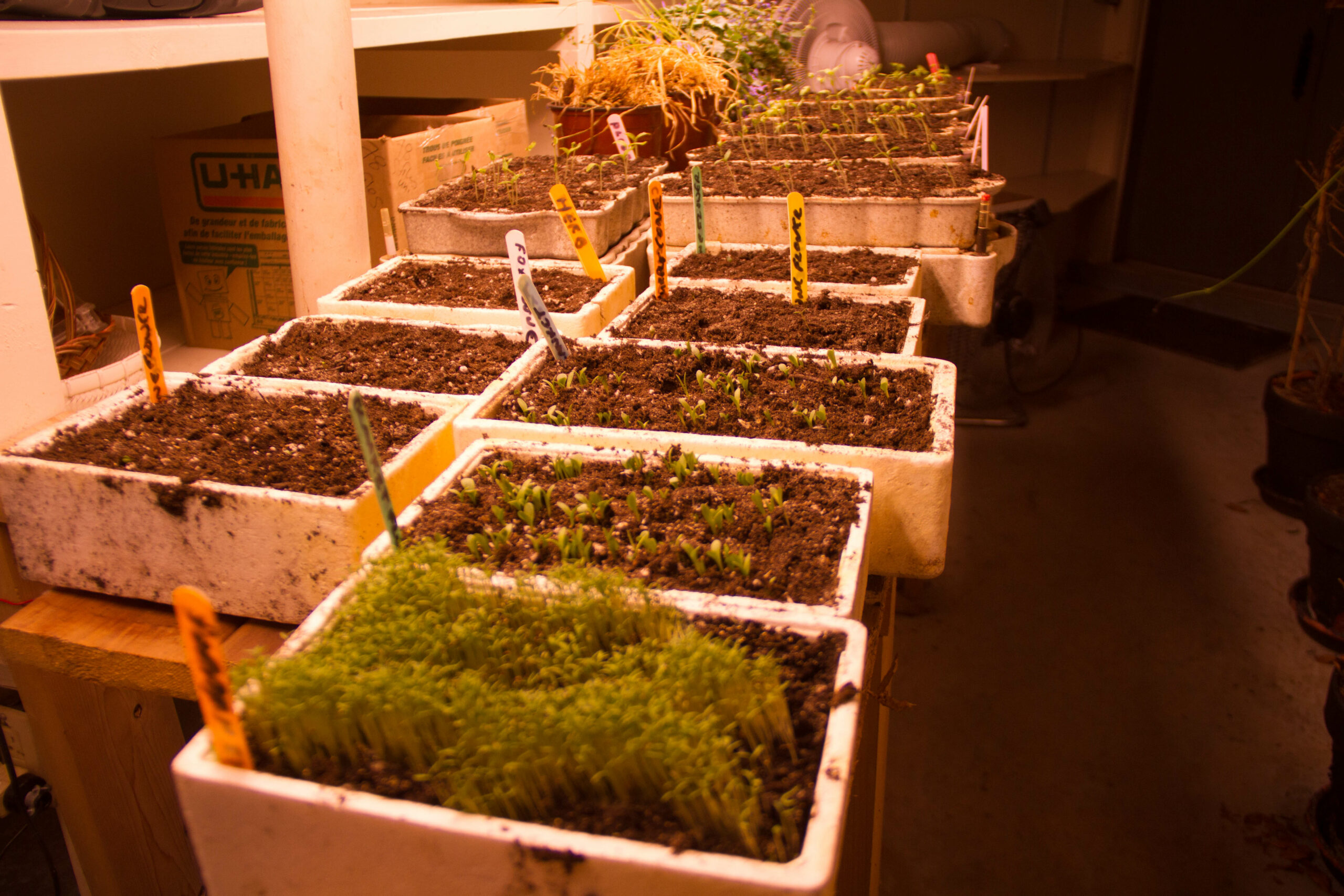 Despite the lockdown, life at Glen Villa has been, and continues to be, very busy. There is always a lot to do in the garden in springtime but this year, there seems to be more than ever. In March we started seeds under grow lights in the basement… 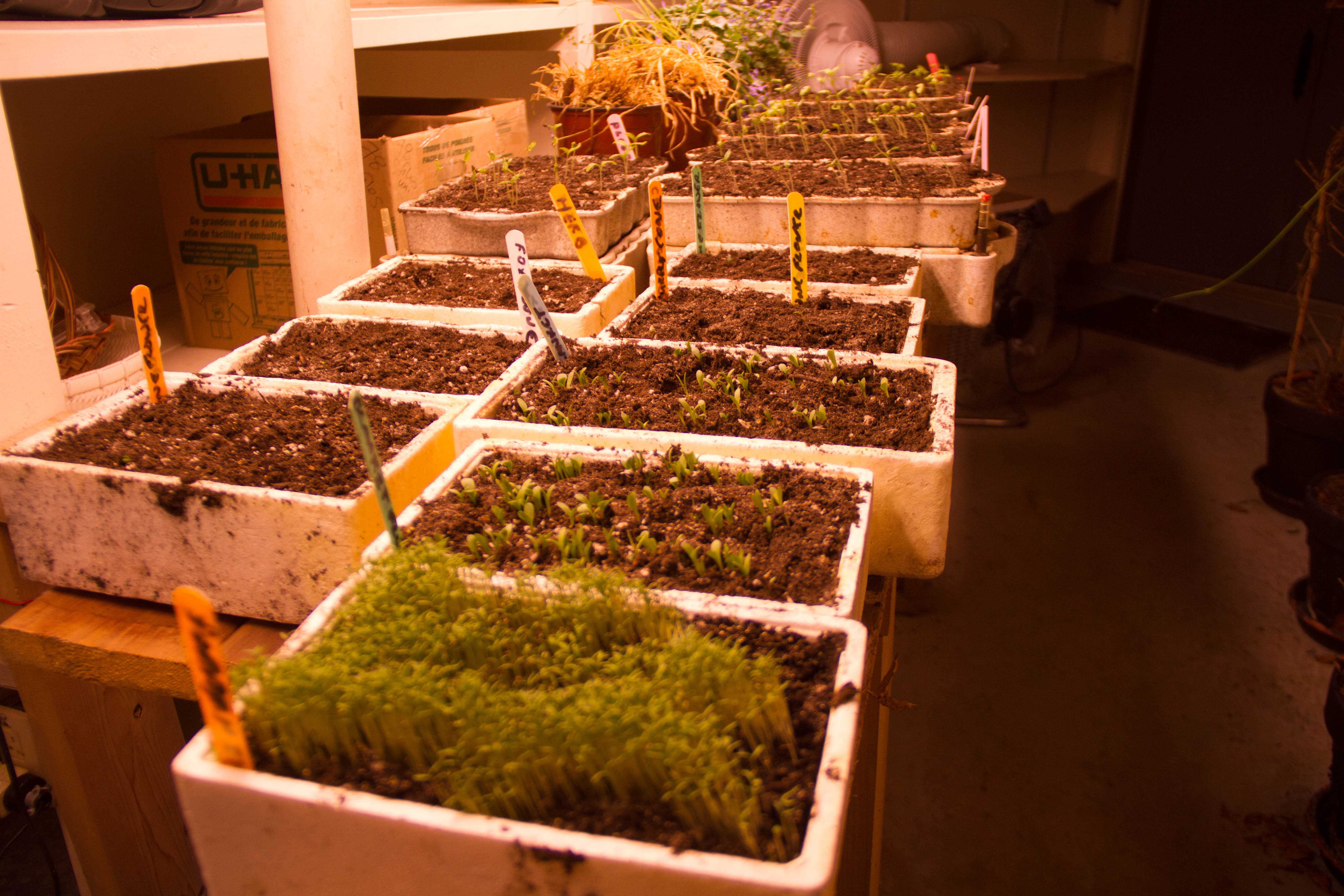 … before moving them towards the beginning of April up to the greenhouse. 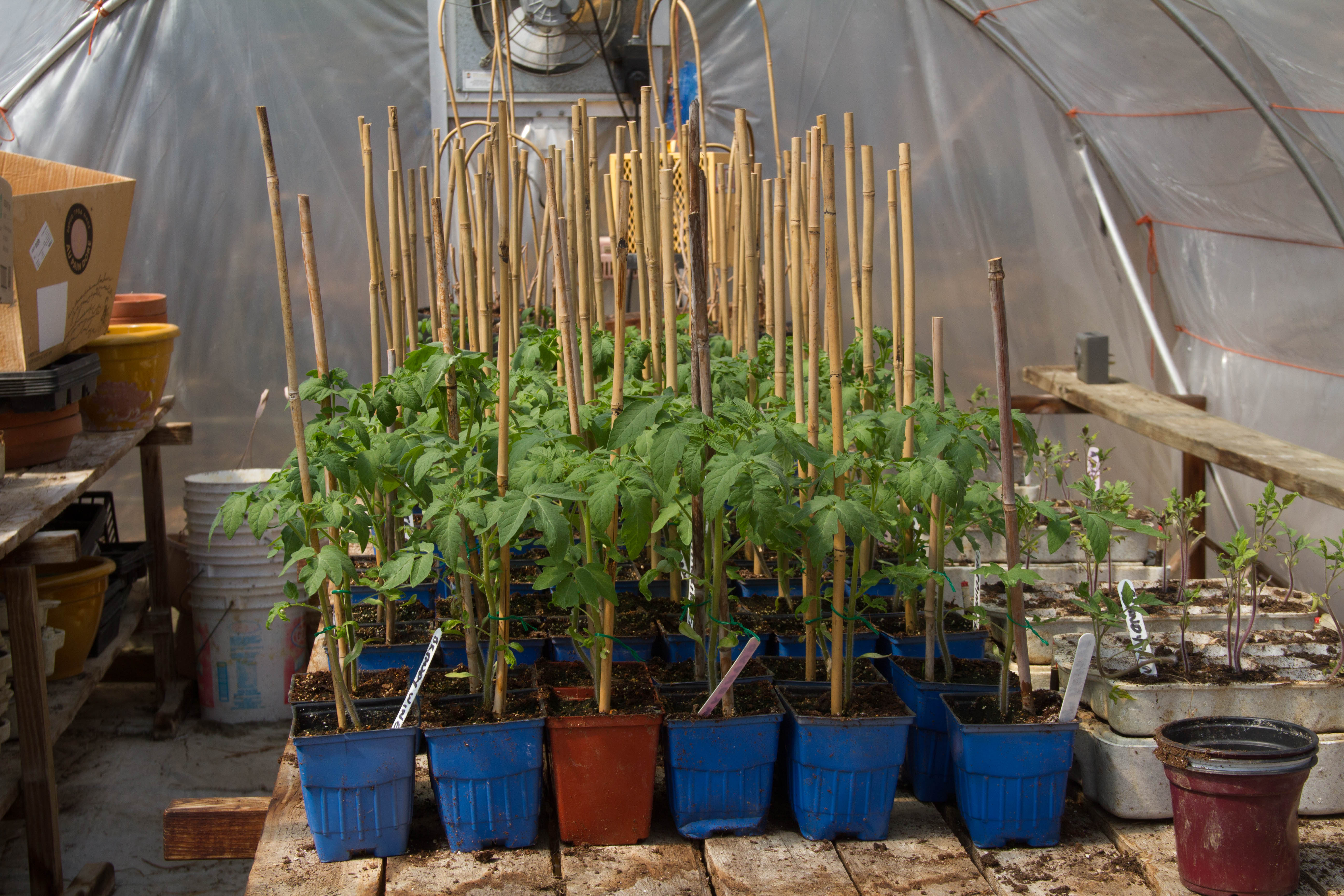 It’s easy to show the ‘Before’ for these tomato plants but to show the ‘After’  I’d need to photograph them growing in the (newly re-fenced) vegetable garden. I can’t do that, though;  it’s still not reliably warm enough to plant them outside. The common folk guide in the Eastern Townships is to plant once the maple trees leaf out in full, which is usually towards the end of May. But by then, I plan to be photographing more interesting things, like flowers in full bloom. So you’ll have to imagine the plants in the garden and the all the juicy tomatoes they will produce.

In its own way, spring is a ‘Before’ and autumn is an ‘After.’ This year’s long drawn-out spring is unusual, and it is following an unusual winter when there seemed to be less snow but more ice. The inexorable movement of the ice following the underwater currents on Lake Massawippi destroyed both of our permanent docks, lifting the top boards and breaking them into giant splinters. 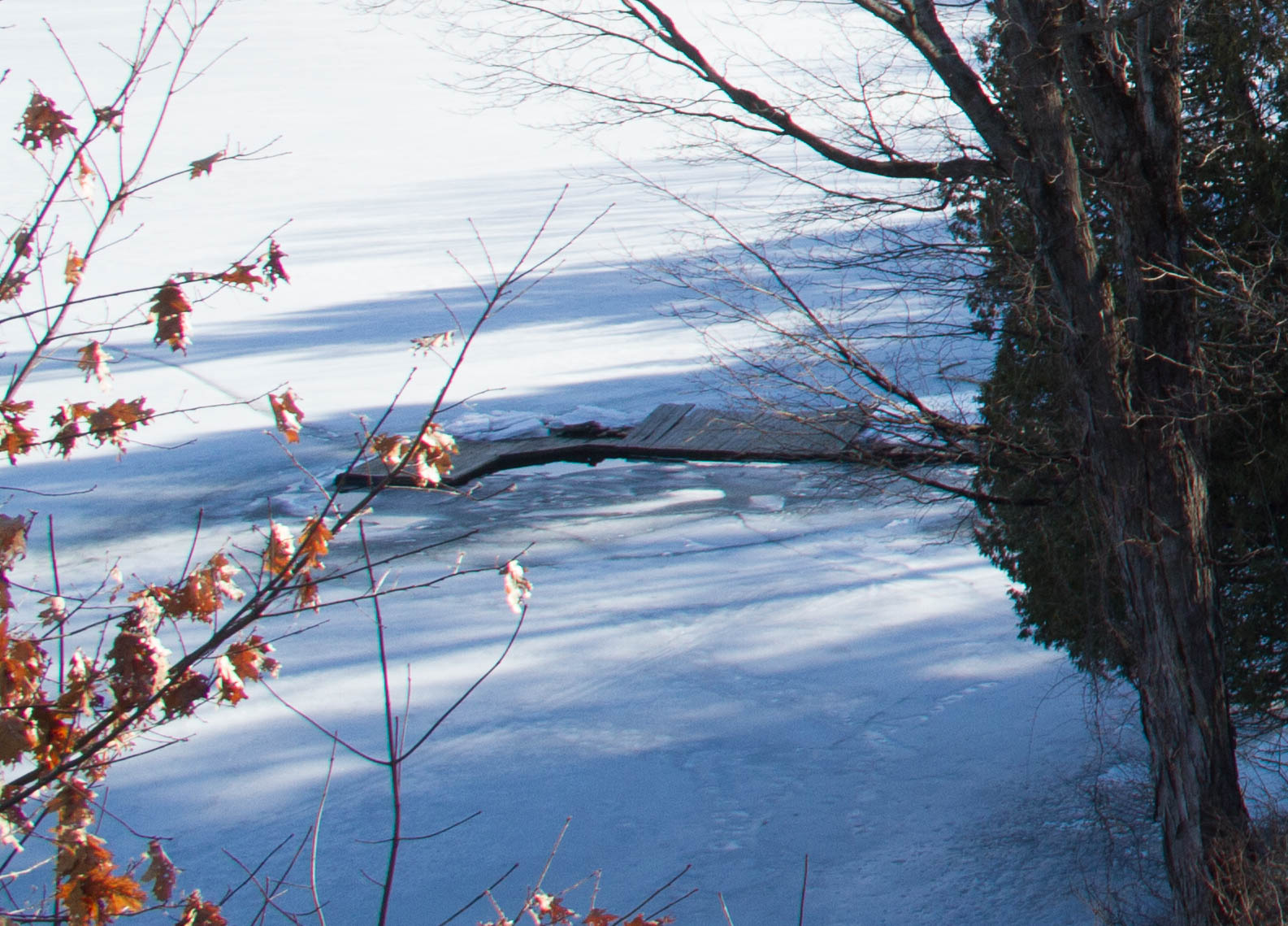 The ice melted not long after I took this photo in March.

To repair the docks, all those boards had to be taken off, leaving only the sub-structure. 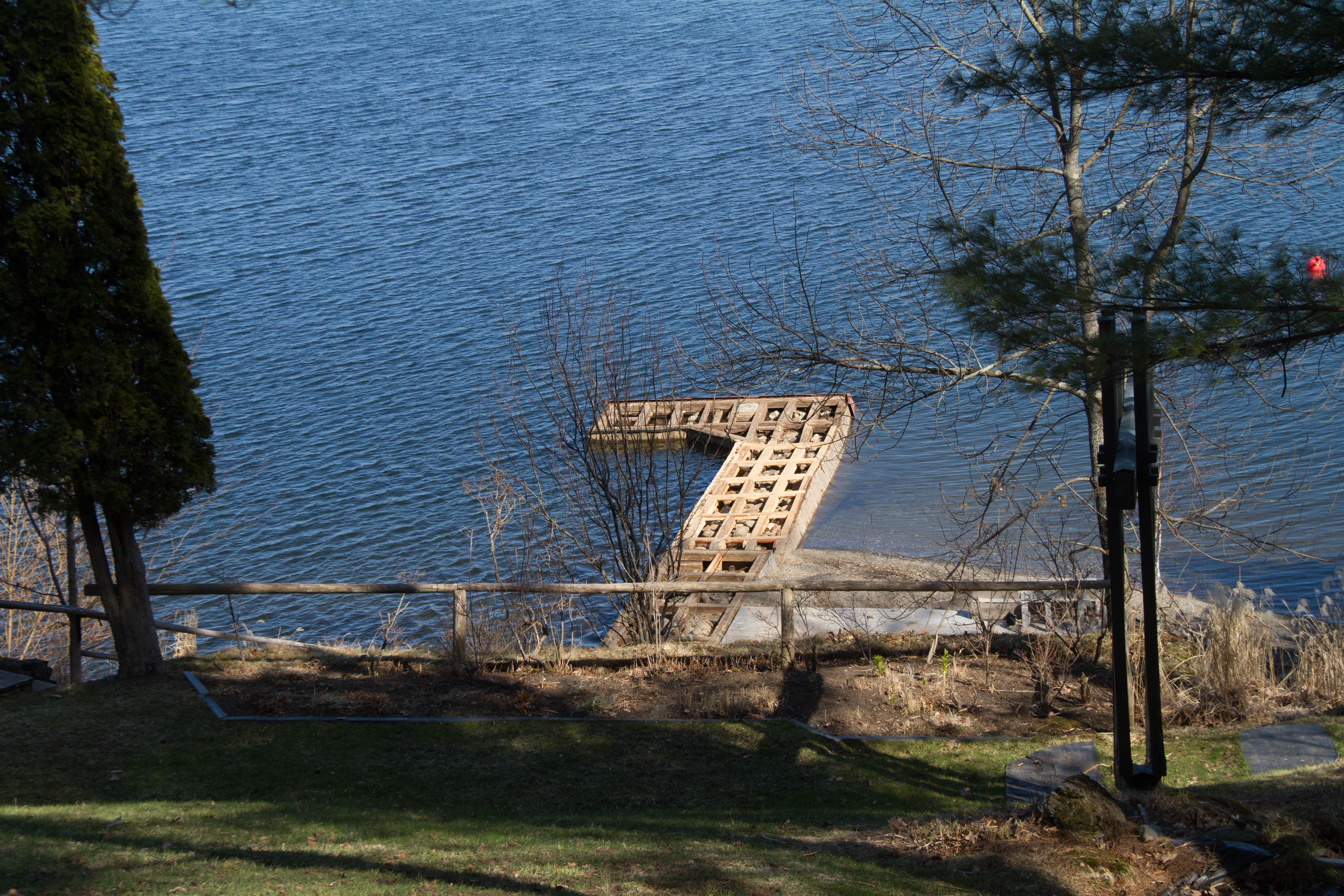 Now that the new top boards are nailed in place we have two docks that should last many more years. 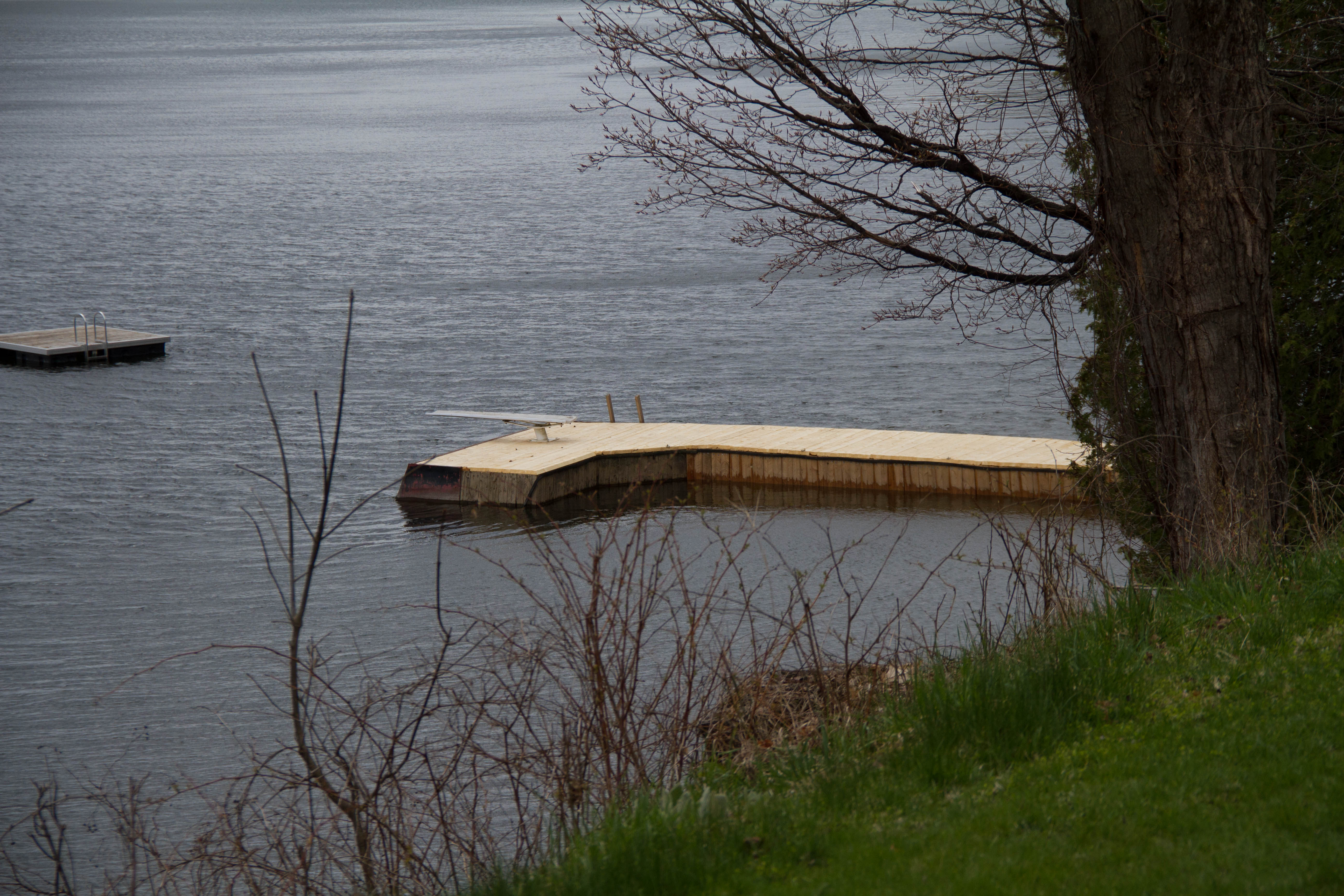 The new dock is ready for summer but no one will be swimming anytime soon since the water is still extremely cold. Even so, the diving board and raft are now in place.

The docks weren’t the only thing that needed repair. A tree fell on the Magritte Bridge, knocking down the sign at one end and seriously damaging the structure itself. 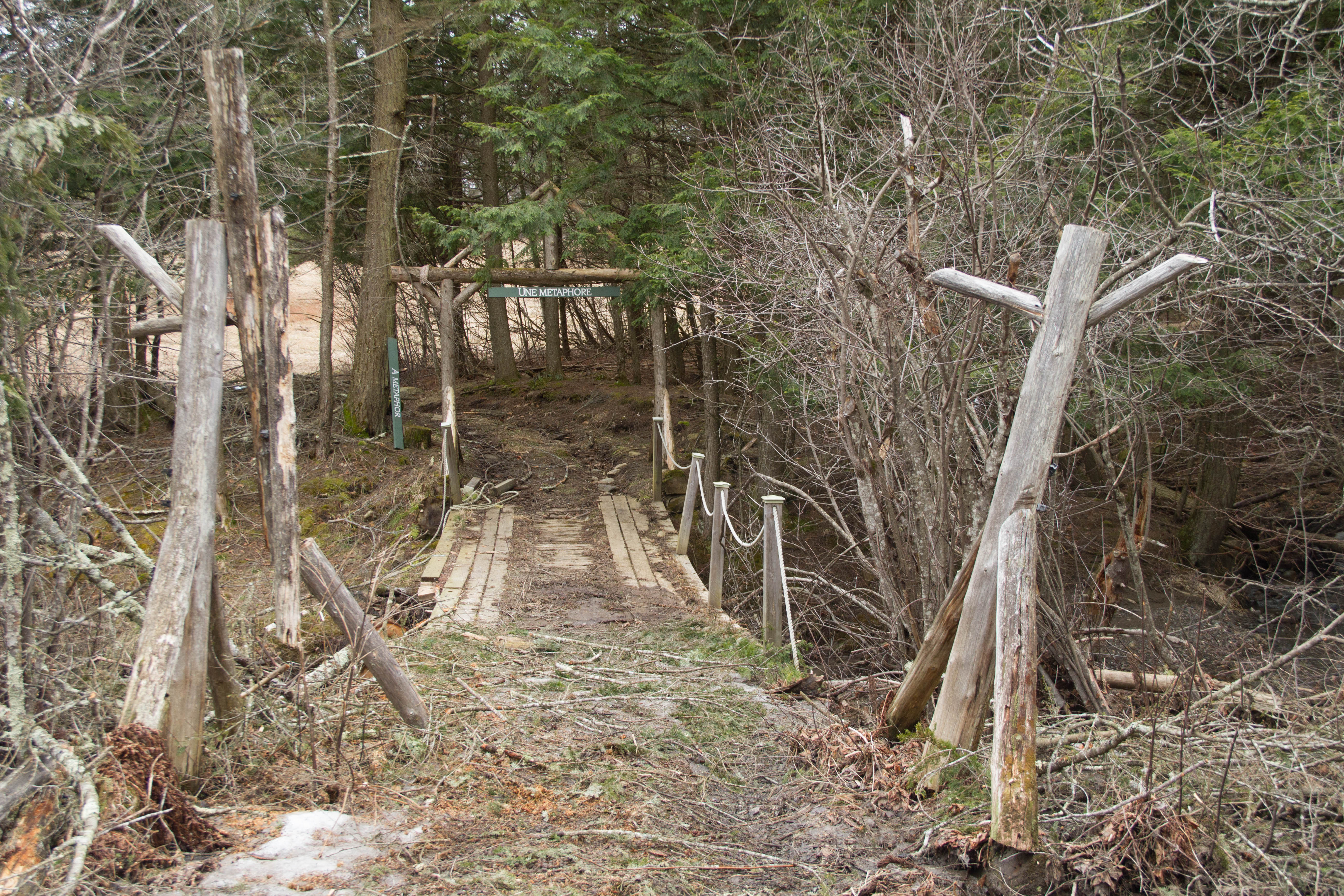 The ‘After’ bridge is much safer. 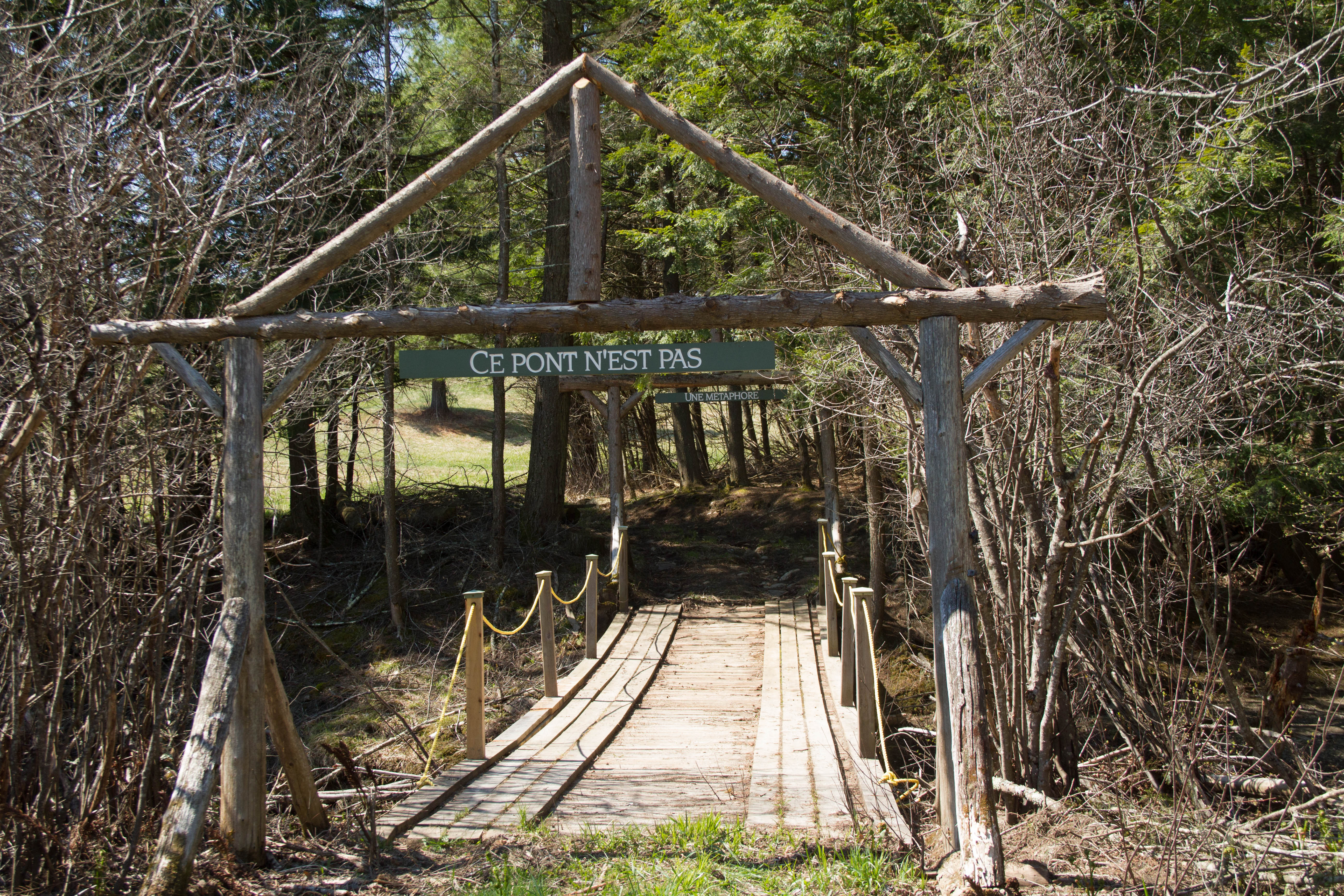 This bridge is a bridge once again, yet always and never a metaphor.

Warm-ish weather in early March took me up to fields high above the house. Near the sugar camp, I noticed these huge slices of wood from a pine tree we took down a year or two ago. They were destined for firewood but that seemed a waste. Yet what to do instead? 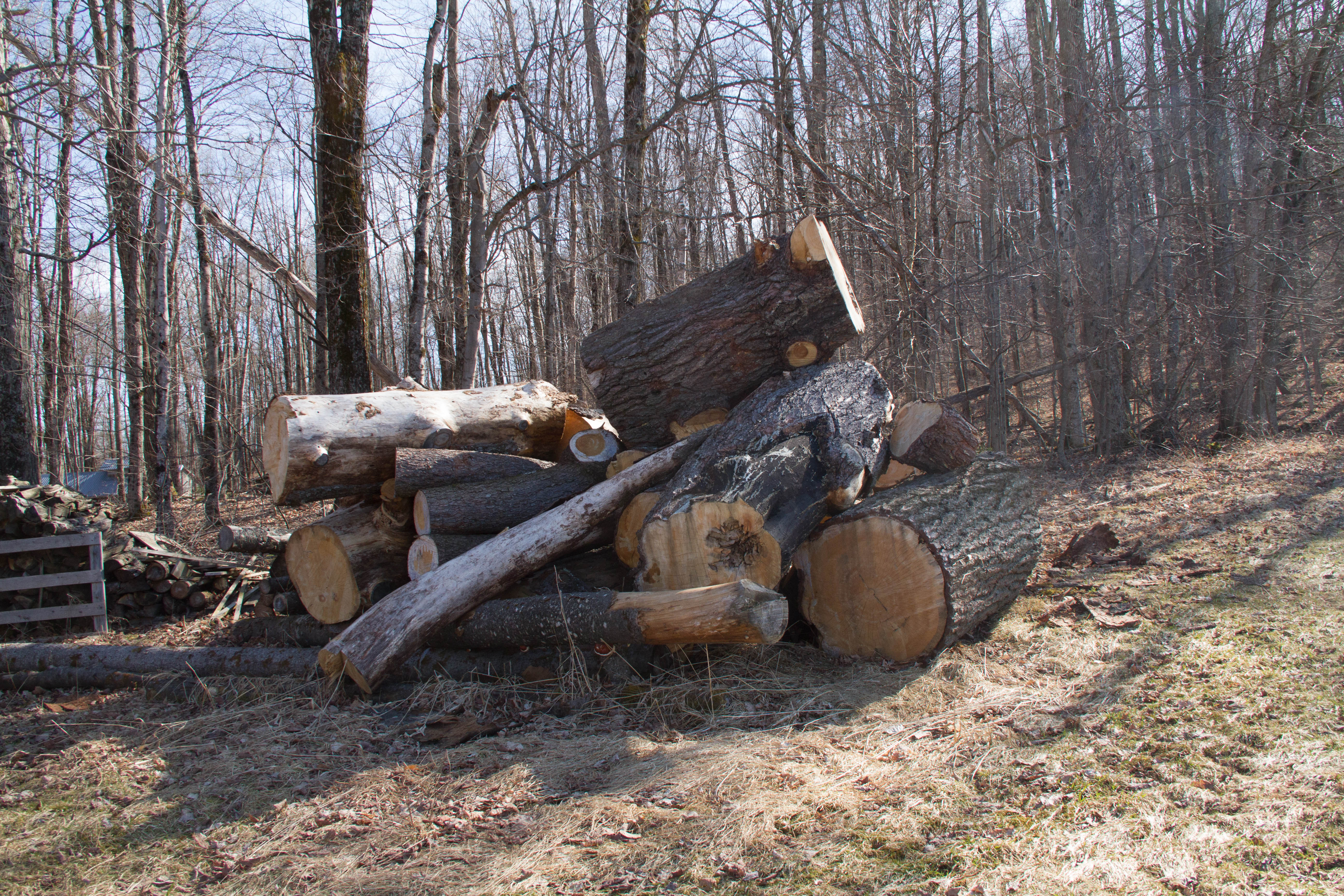 A little tweaking and this pile of jumbled stack could become an interesting sculpture.

I briefly considered simplifying the stack and leaving it in place as a sculptural woodpile. But another thought occurred to me when I was walking the trail, wishing for a bench where I could sit and rest for a bit. So last week we loaded one big chunk of wood onto the tractor… 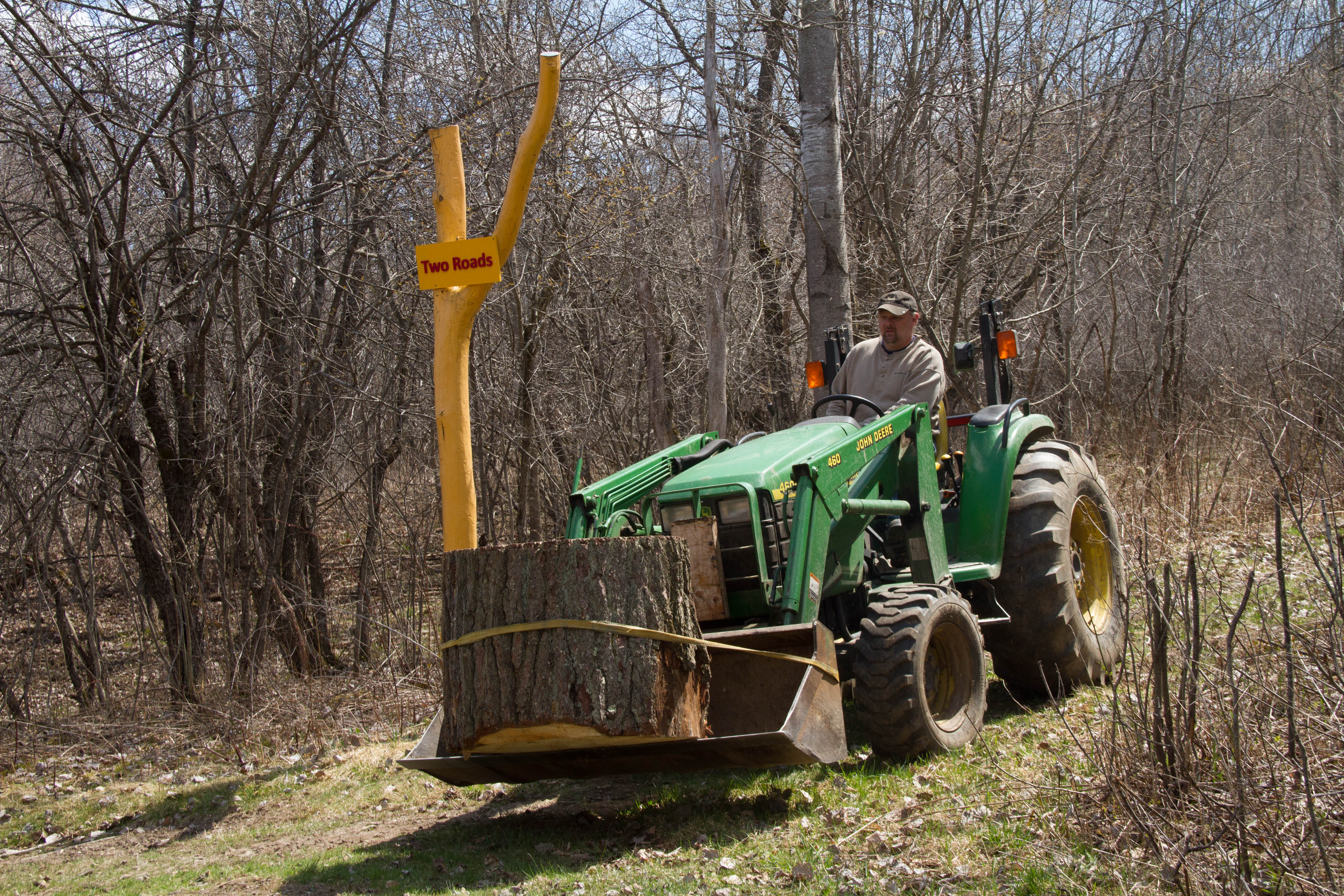 cut it into sections with a long-bladed chain saw … 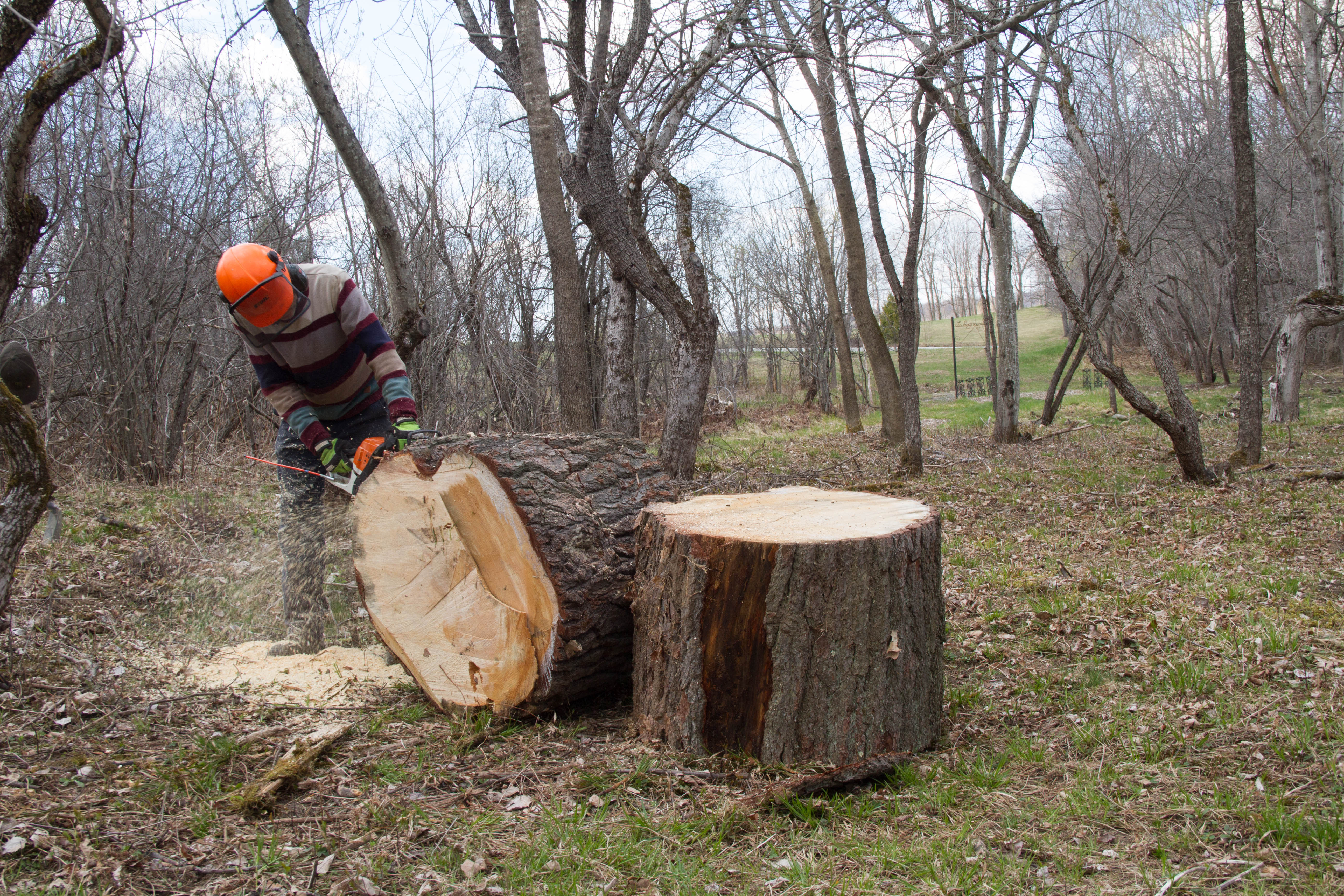 … and created not one or two but three resting spots. 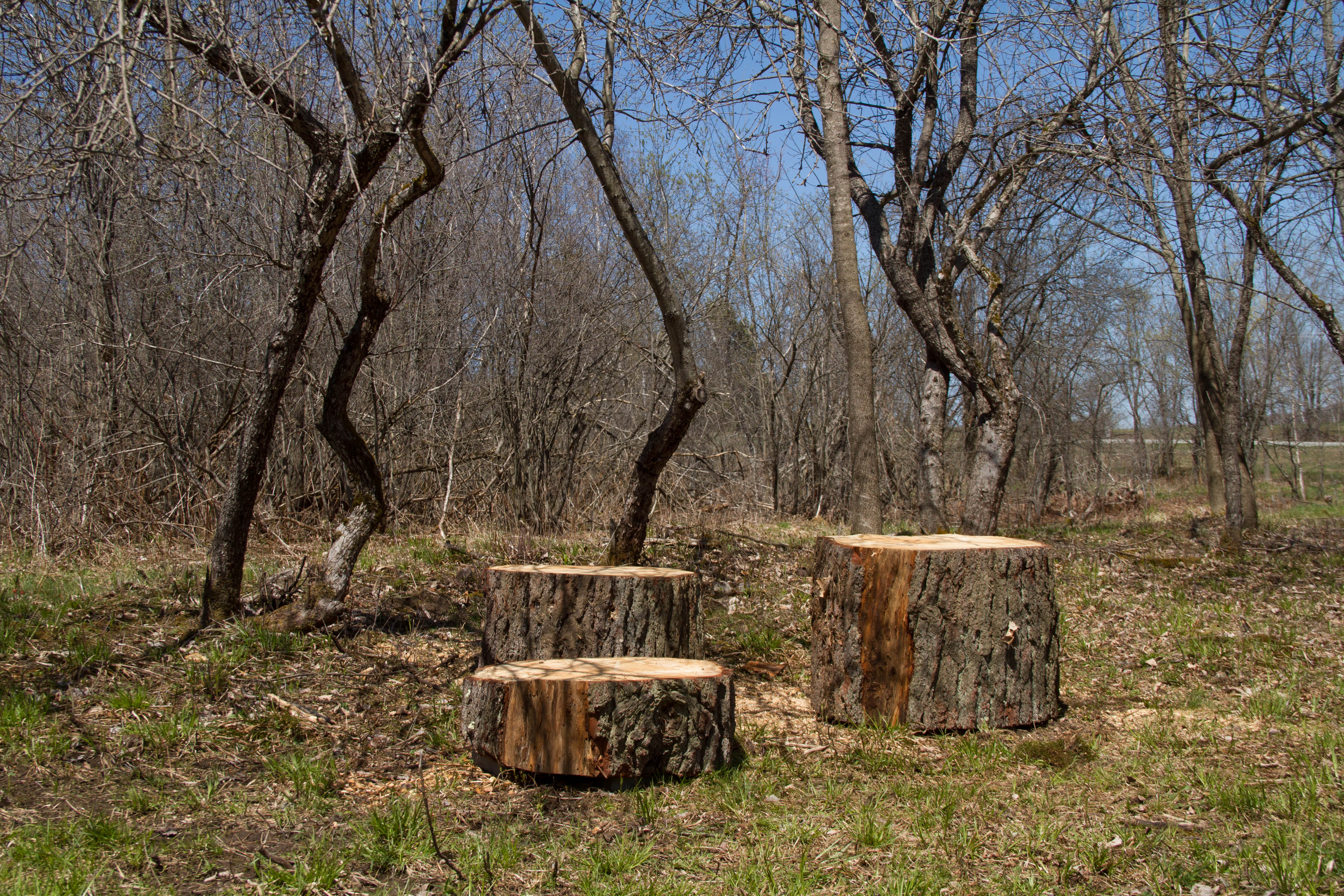 I spent the time while Jacques was chain-sawing looking around and soaking up the sunshine. Doing that, I noticed  some old apple trees nearby, a continuation of the orchard that used to be there. With growth only beginning to sprout, the trees weren’t hidden as they are in summer and fall. 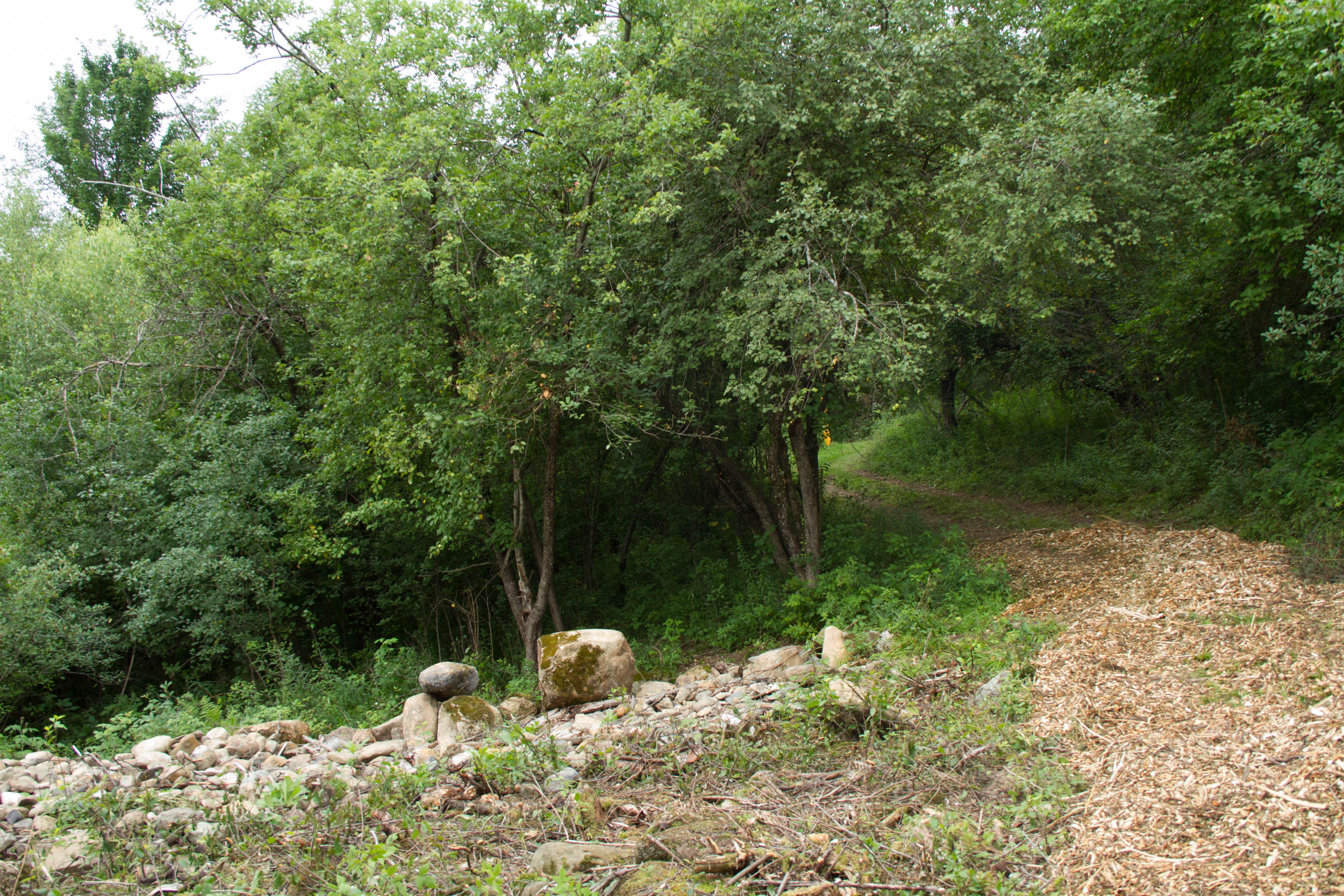 This view is from August 2018 but it is the only one I have that shows a ‘before’ view.

And now, after an hour and a chipper made short work of the undergrowth, the view is quite different. And a lot more appealing. 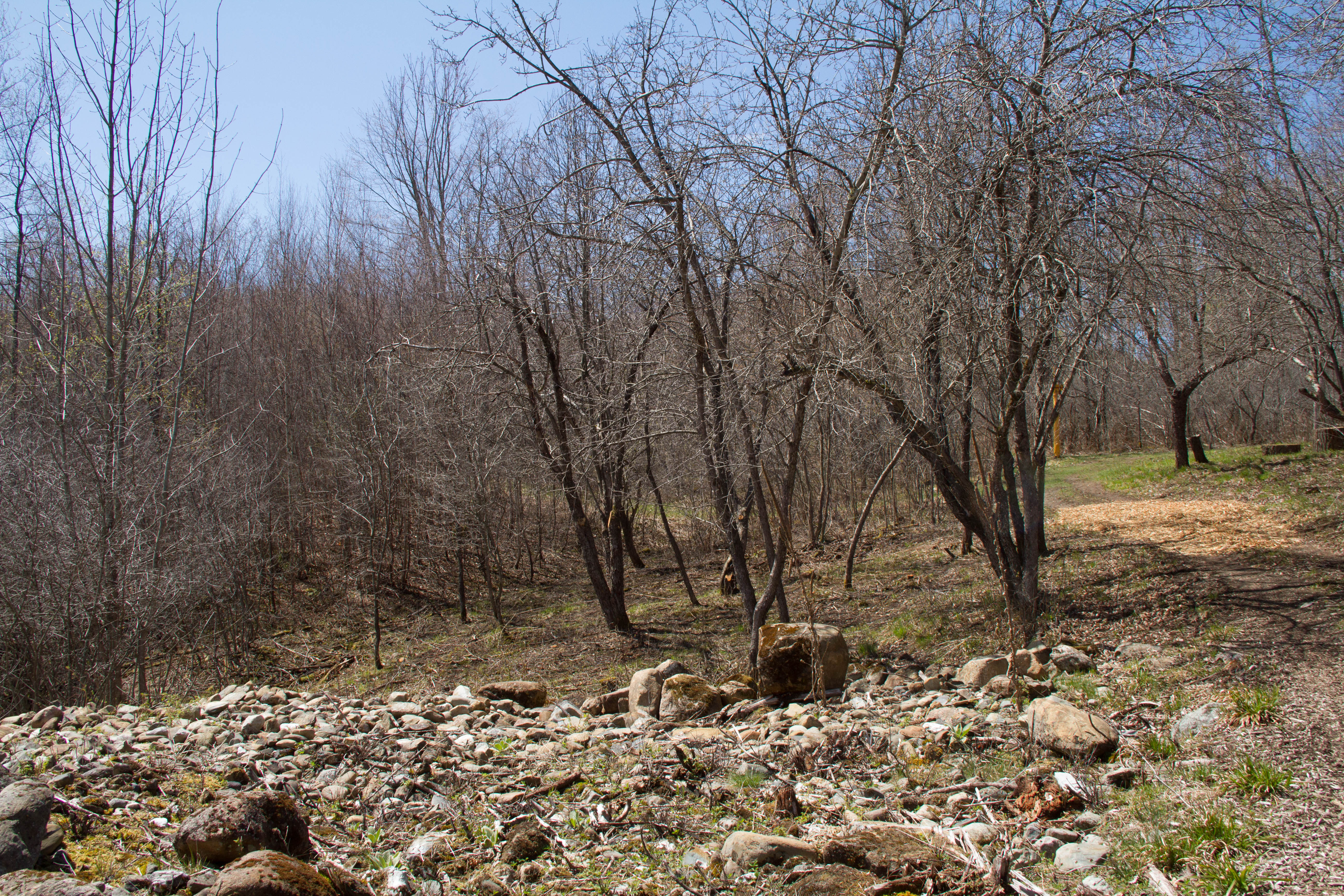 The new more open view is partway along the Timelines trail. Working on that is one of many projects I’m now in the midst of. So while I have to stay close to home, on bright sunny day, there is never a lack of things to do.

What’s keeping you busy in the garden? Any new projects underway?

I had no idea about the dock!! The things you miss under lockdown. Nor did I know there was a greenhouse! Lovely little seedlings looks like they are well on their way. And I love the resting spots.

The docks were a very bad surprise but thankfully they are now better than ever. As for the ‘greenhouse’ it is really a polytunnel more than a proper greenhouse. We don’t heat it and open it towards the end of March. I’ll show you the next time you are here.

Summer lounging… what an idea! Not when there are so many tomatoes to eat.

It’s always great to see what you’re doing in your wonderful landscape. I loved the pine trunk arrangement.

Such a curious year with a relatively mild winter and long cool spring — that was the case here in the Southern Appalachians, too.

And it looks like you’ll have LOTS of tomatoes this summer, potentially. I’m afraid as a primarily Southern gardener, I find it interesting that tomatoes seem to be such a passion in Quebec.

Last year, as I arrived in late May, I couldn’t believe all of the tomato transplants available in the local nurseries. They were so more than I’ve EVER seen available here. But this is a different climate, for sure. I put out tomatoes, peppers, and basil last weekend for our summer renters, hopefully, along with planting pole beans and climbing squash.

Now we’re getting drenching rains, so at least germination conditions will be good!

Last summer in Quebec, I was much more interested in seeing if I could grow my cool-season favorites successfully, which I did, largely, with a few exceptions. The dwarf sugar snap peas were amazing, but the spinach almost immediately bolted in the long days of summer. The other greens, though, were great, from beets to kale.

My scarlet runner beans took a long time to start flowering, but the harvested beans were delicious!

Hope the rest of spring goes well at Glen Villa — as you write, there’s always plenty to do, And you have such a large area to both be creative in and manage, too.

There are never too many tomatoes for me, Lisa. We enjoy tomatoes fresh almost daily from mid July on and tomato sauce and soup throughout the winter months. I am not as proficient or as avid a vegetable gardener as you and find it hard to keep up with the green beans and beets. We plant two kinds of potatoes, fingerling and red, and that harvest never lasts much beyond December. I gave up on peas — they never seemed to produce as many as we wanted and our Saturday morning farmer’s market supplied enough for a day or two. Hope you can make it up this year… border now closed until June 21.

Tomato growing! That’s a different world to seat making, somehow. Charles has been making an (accidental ) seat too, in the wood. I’ll do a post when it’s finished…Good to see you enjoying some sunshine! Xxxx

Sunshine and summer seem to have arrived this week. I was actually hot outside yesterday. But who knows what next week will bring?