A river of snowdrops

You are here:
Glen VillaPeoplePlants 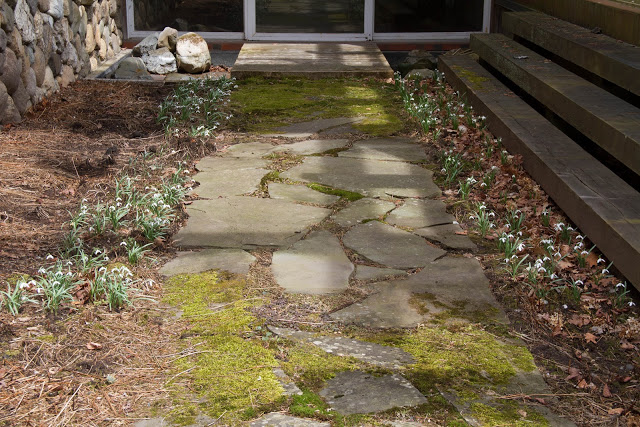 Last year I dug up, divided and replanted about a dozen clumps of snowdrops. Amazing how a few bulbs will grow with time. According to my (less than perfect) planting records, originally I planted a few dozen snowdrops, ordinary ones that are readily available in most Canadian gardening catalogues.

Thanks to an April 2012 blog post from Kathy Purdy of Cold Climate Gardening I decided
to split the clumps. They were starting to look a bit overstuffed and I thought it would be worth the time and effort. Was I ever right! I ended up with an incredible number of small bulbs and bulblets — in my notes from last April I estimated there were two thousand of them.

I planted them alongside a path that leads into the garden. This is the result in mid-April 2013:

The bare ground on the left side of the photo above is full of ferns in summer, as is the ground on the right. This is a cool, dark area where ferns and moss thrive. At the far end of the path are two shallow pools where frogs like to congregate. Their croaks echo. At dawn, when light comes in at a sharp angle, the area feels mysterious.

Here’s another shot of the snowdrops, showing one side of the path only. I think the result is pretty spectacular for year one. Can you imagine how it look in another year or two, when each tiny bulb has grown that much bigger?

And you know what that means —  in another few years I’ll have to divide the snowdrops again. That’s ok.

Here is the view from the the house towards the garden. As you can see, despite having planted so many bulbs, the river of snowdrops doesn’t reach the end of the path. And there’s all that bare ground on the right! So I know where the divisions will go.

Dividing and replanting takes time, but for me the work is worth it. Seeing snowdrops tells me that winter is over.

This is important in my part of the world, where typically winter starts in late November and last until late March. Seeing any growth at the end of winter lifts the spirits enormously.

Snowdrops are the first flower to bloom in my garden. They are the signal that mud season is about to begin. Do you think that’s why they hang their heads?